The best method with UAV ,  is to allow for independent passive reception and AI  analysis . There are I think 3D radars that can analyse target and engage . Without need for pilot or operator . Short range directional beams are hard to intercept , and are another method . Any signal picked up, can be , we assume ,unscrambled . Given time and resources . Unless the code used is a one off . Per mission or per device . Randomly generated  each time . And shared only between two devices . Even if one device is compromised  , then this only affects a small number of devices . And not entire system . So say ten long range UAV  , attacking ships at sea , with a pilot flying each , will heve ten different codes , randomly generated , for each UAV . Even each control signal for each move , say left or right , is coded differently . Never the same . And discarded at the end . A lot of code generation . I don't even know if this is possible with live video feed . Needing heavy data transfer .
JohninMK

My father was a fighter controller using radar in north Africa in WW2. They had a big problem with Luftwaffe planes attacking from Crete avoiding contact by listening to their radios tuned to RAF frequencies so he developed a code to home his fighters onto their targets. It was simple, two words, left or right. An instruction of which way to turn to intercept. Then hourly they randomly flipped left to mean right etc. I still have a pilot's silk scarf that Dad claimed off a particularly angry shot down pilot.

Simply changed parameters in complex coding can be very effective.

Yes , if you can hide location of radar or radio mast . Make immune from jamming or anti - radiation attack . In ww2 , they did not have all this . A passive system is better . Without sending out signal . Well most of the time .  In case of using radar , the UAV can make use of it , during last few seconds . To set guidance parameter for gyro etc . Then switch off . Initial navigation by star light . Homing in by passive IR .  Final attack by radar . No pilot or operator . One way trip . Kamikaze UAV .  Longer range . Warhead WD40 !

Iran released photo of 50 of the latest long range drone ( oved 1000 km ) , in formation flight . And a simultaneous hit on target . So they carry significant payload . So be it by missile or drone , means of delivery exists . So the steps are :

( 5 ) Watch the yank greatest defeat in history on TV .

Three Iranian guided missile projects for army aviation, which are currently being tested, were officially presented in Iran.

One of them is the aviation version of the Dehlaviyeh ATGM with a laser-beam control system, that is, Iranian copies of the Kornet, mass-produced in Iran. Let me remind you that earlier a photo of one of the Iranian multi-purpose helicopters with ATGM Dehlaviyeh already flashed, and now they were officially shown installed on the AH-1J helicopter. 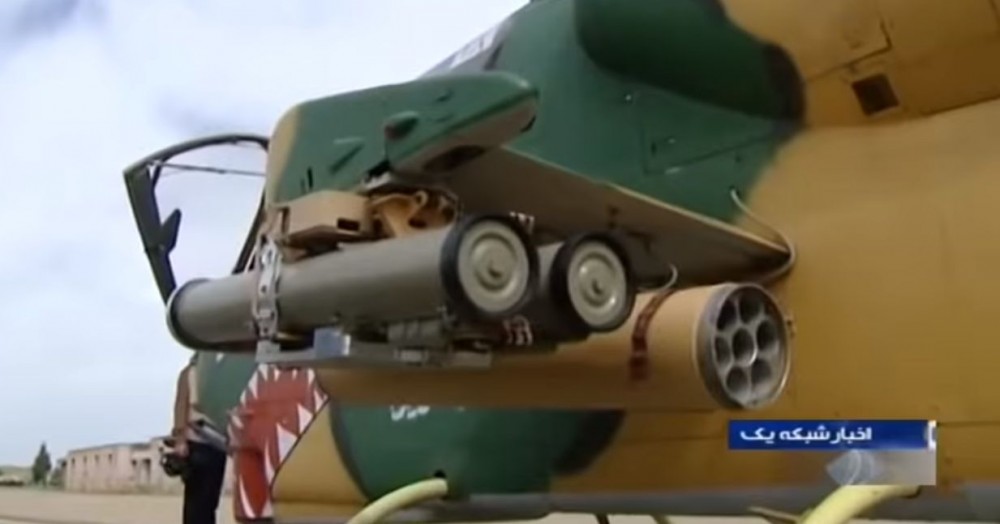 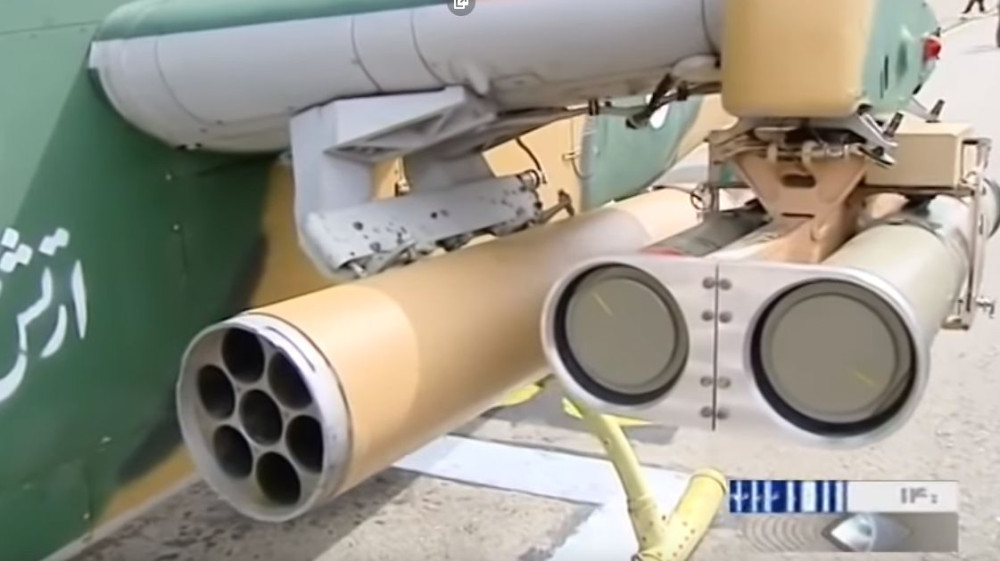 The next project is an air-to-ground rocket - Heydar. The rocket can be equipped with different homing heads and works on the principle of "shot-forget". Range more than 8 km. 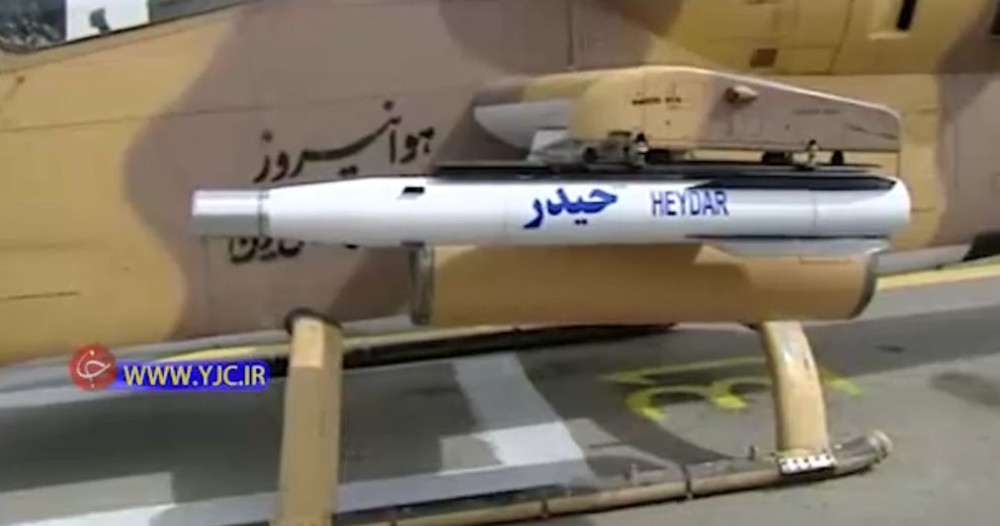 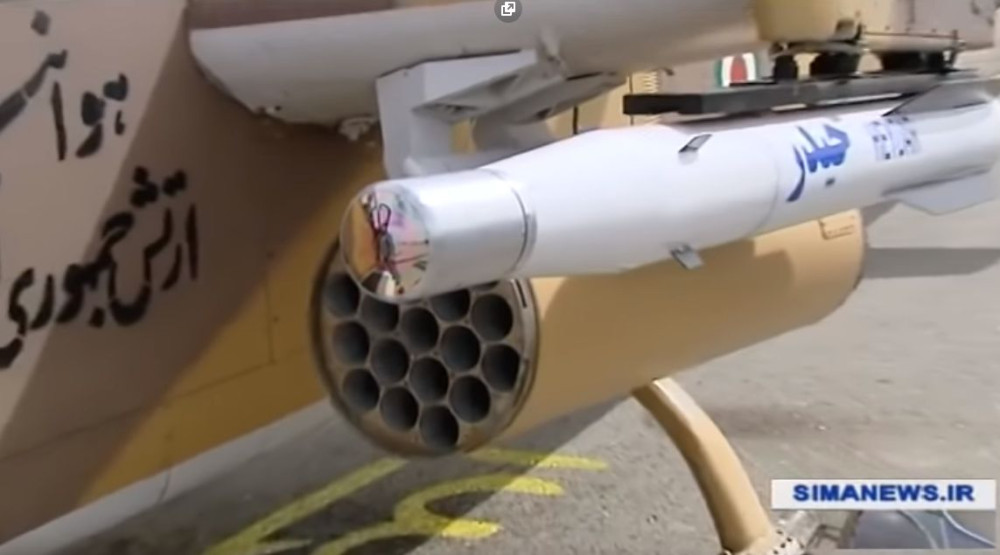 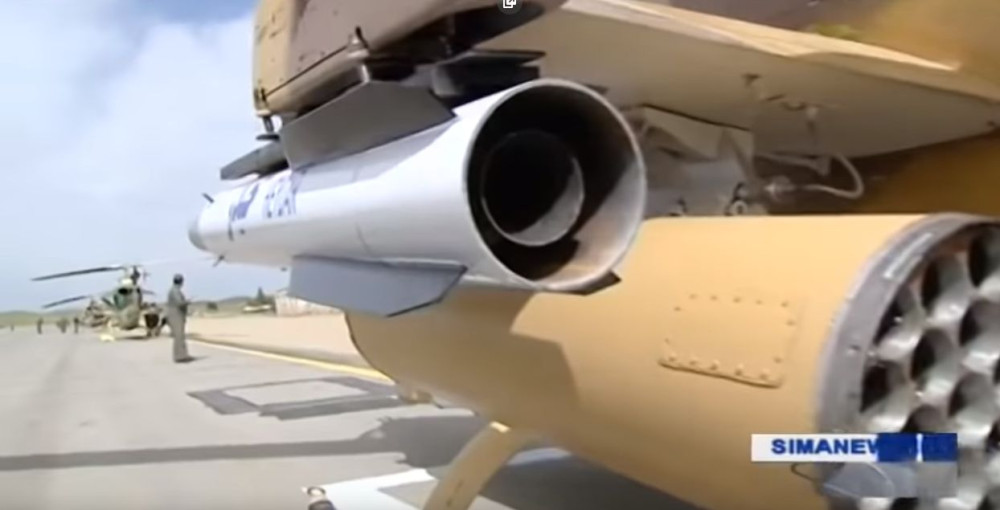 Third rocket Ghamar Bani Hashem. It is said about her that she can work on both air and ground targets, but judging by her appearance in general, this is clearly primarily an air-to-air missile. 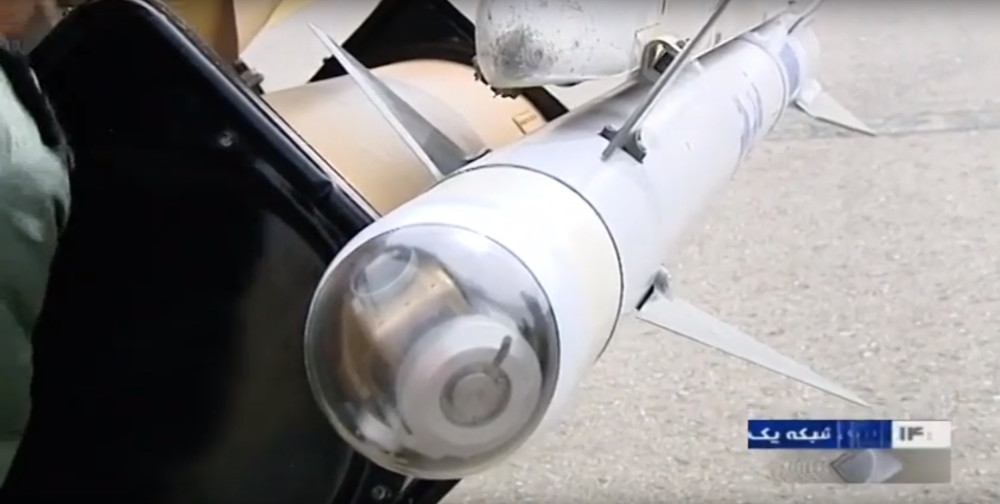 So we  want to put expensive helicopter to attack ground target with short range ATGM .  It did not work so well for the yank in Vietnam nor soviet in Afghanistan . Iran has limited numbers . Best use them against higher value target at  sea where attack most probably come from and more difficult to stop . Use anti - ship missiles . Arrange for refuelling at sea . Use smart artillery and drones for land attack , mounted on cheaper ground vehicles . Same thing for the use of close support attack aircraft .

About stopping flow of oil . Tell Saudi  that you may hit oil well head . And they have to retaliate . So both will loose oil industry . Instead they can secretly arrange for smoke near well , and so can Iran . Without any shot being fired . The governments then forced to cut oil output because of " damage " . This saves face . Put strain on market . Stop sanction . Stop war . Alternative is region going up in flame . Loose loose . Not win win .

Since ships carry heavier missile with longer range than helicopters . Then helicopters must enter into firing range of ship missile , before firing their own missiles . This means they must disable ship radar and be low RCS also . They will be able to be refueled  at sea , unlike jets . They can pick up floating fuel pods from the water surface , released earlier by a sub . Using a winch and hooks.
yavar

In principle, these guided aerial bombs were already known, so the images of the Balaban and Yasin bombs (called JDAM-ER) were shown at exhibitions earlier this year among the products of the Iranian Defense Industry Organization, and the first version of the Ghaem bombs (Qaem) was presented together with the UAV Mohajer-6. However, it turned out that under the name Ghaem, we now have a whole family of guided bombs for drones. 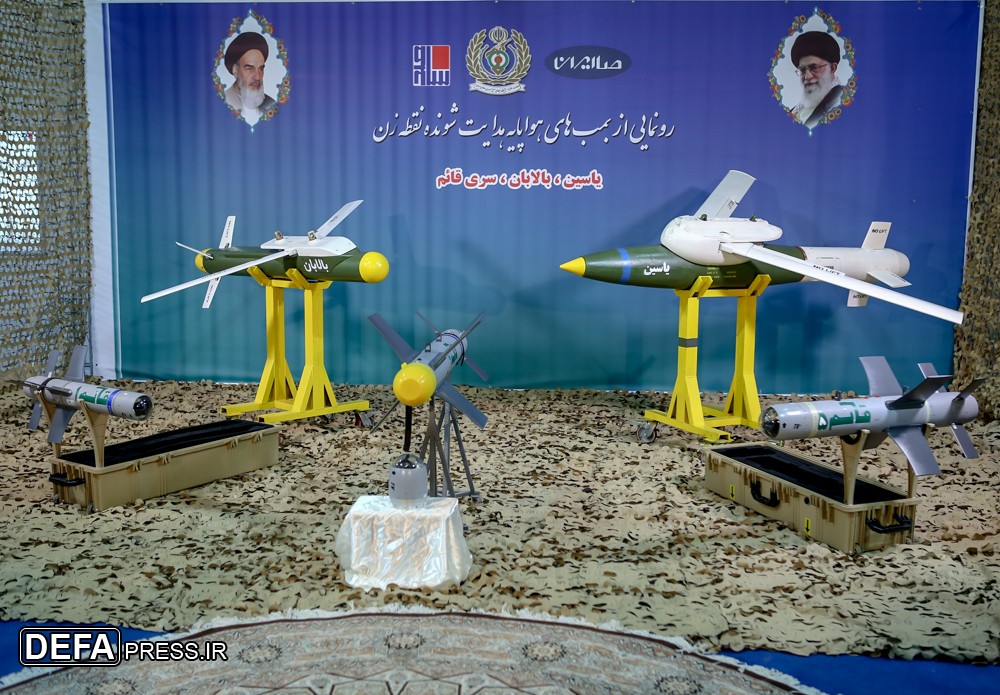 Ghaem-9 is a new version of the bomb for large shock UAVs like Mohajer-6 and Shahed-129, Ghaem-5 is the standard guided bomb that immediately went into production with the Mohajer-6 UAV and already received a baptism of fire during strikes on positions of Kurdish groups in the border areas of Northern Iraq, and Ghaem-1 is a smaller version of it designed for use with relatively small UAVs, such as the widespread Iranian tactical reconnaissance UAVs Ababil-3. It is stated that they can be equipped with different homing heads.

Yasir guided planning bombs (JDAM-ER) have a flight range of more than 50 km and were shown for the first time last year among the armaments of the Su-22 AKSIR fighter bomber upgraded in Iran and there were already shots of their use from F-7 fighters. In turn, Balaban guided planning bombs can hit a target at a shorter distance (more than 25 km), but they are also noticeably smaller. On the video frames, by the way, you can notice how they are launched including with jet drones Karrar.
On target, these planning bombs Yasir and Balaban are guided by the installed inertial and satellite navigation systems. 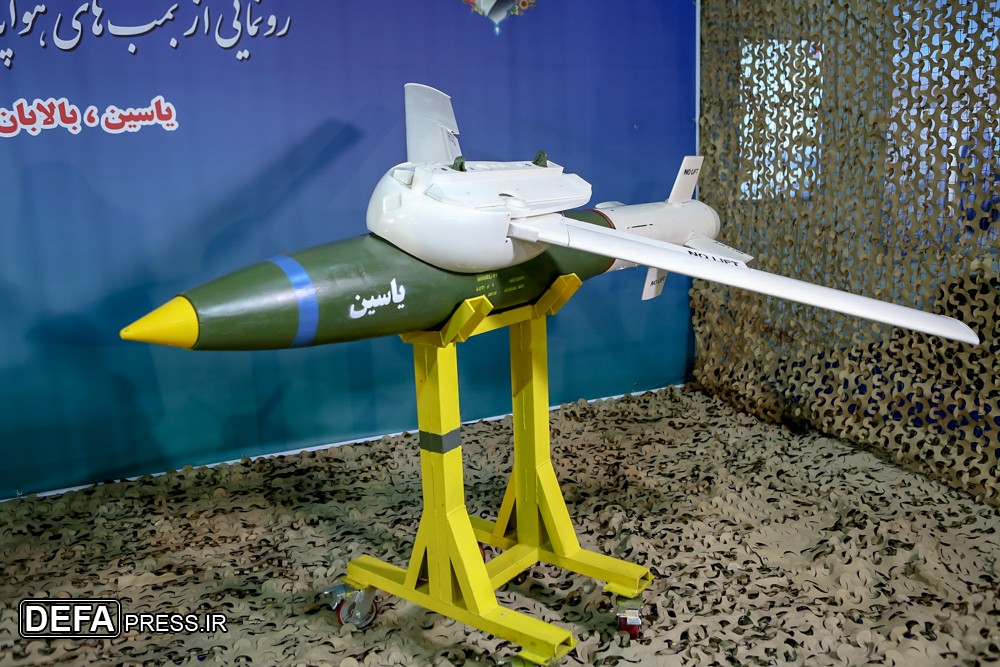 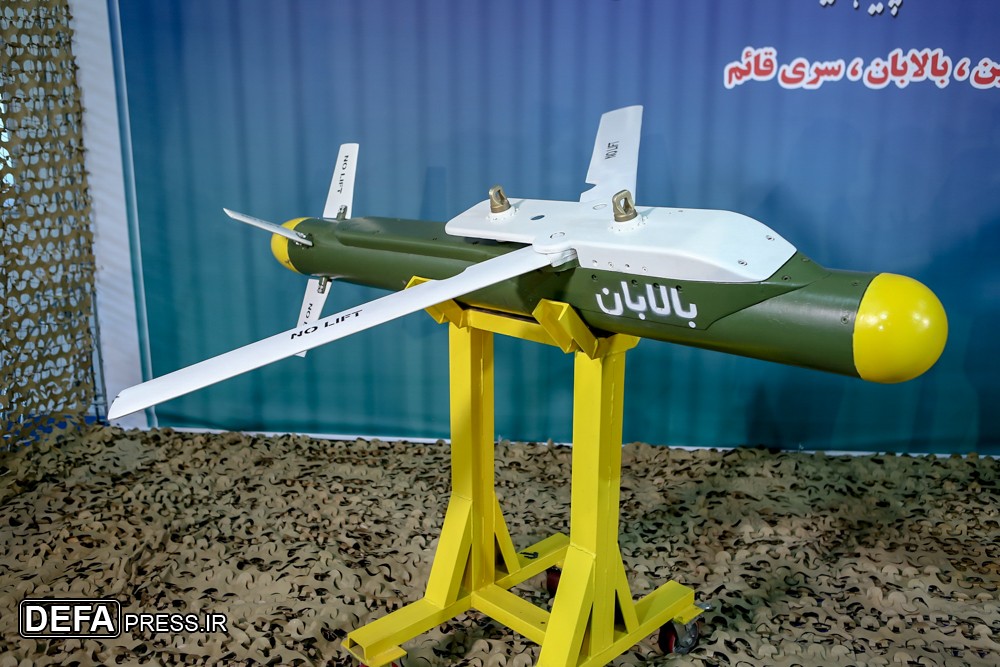 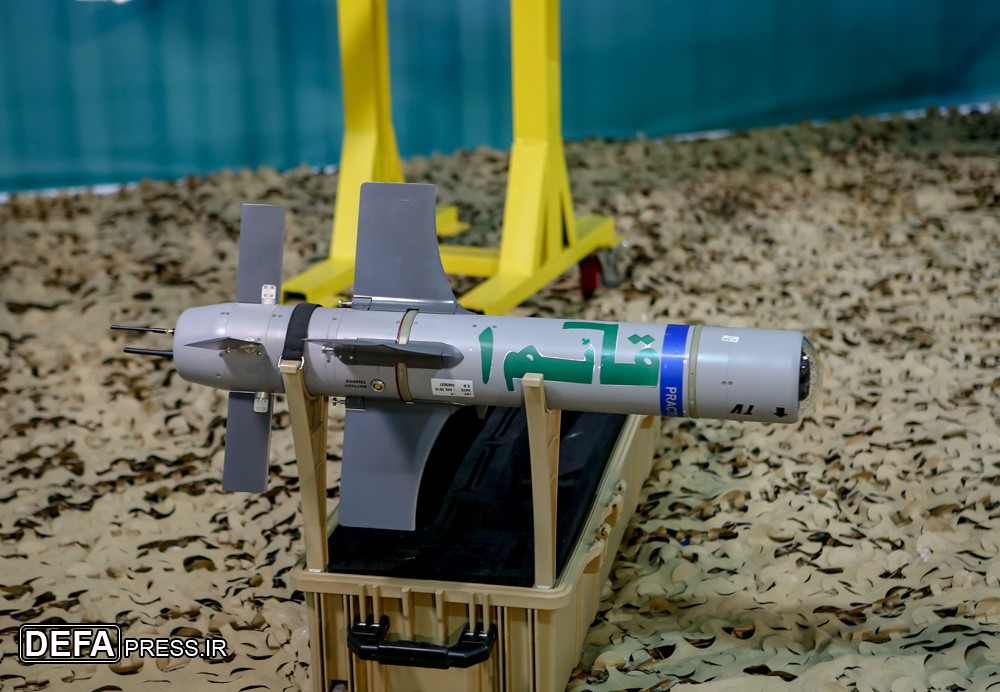 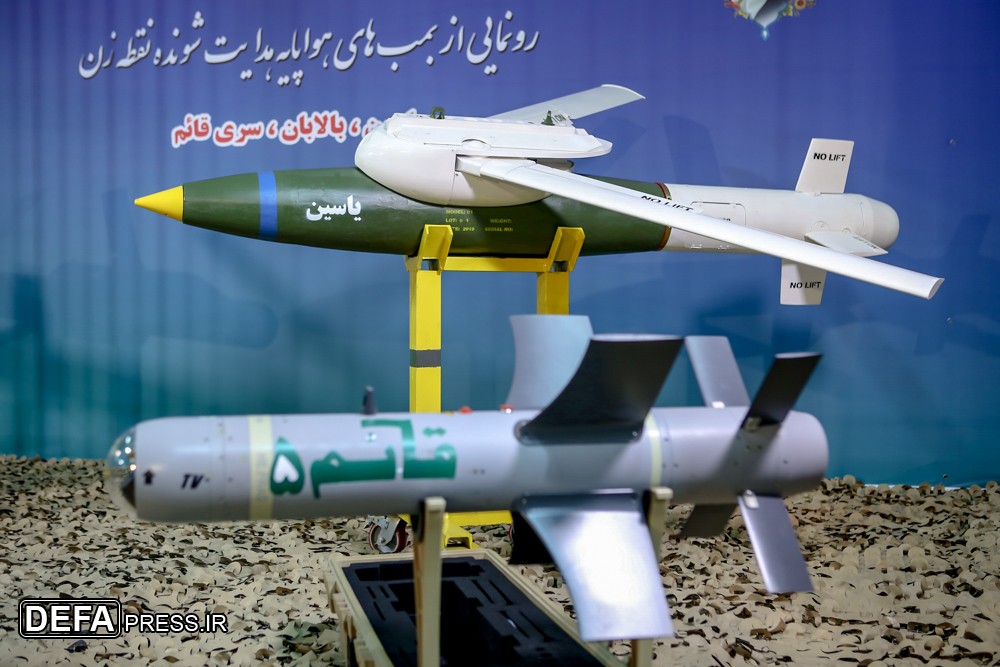 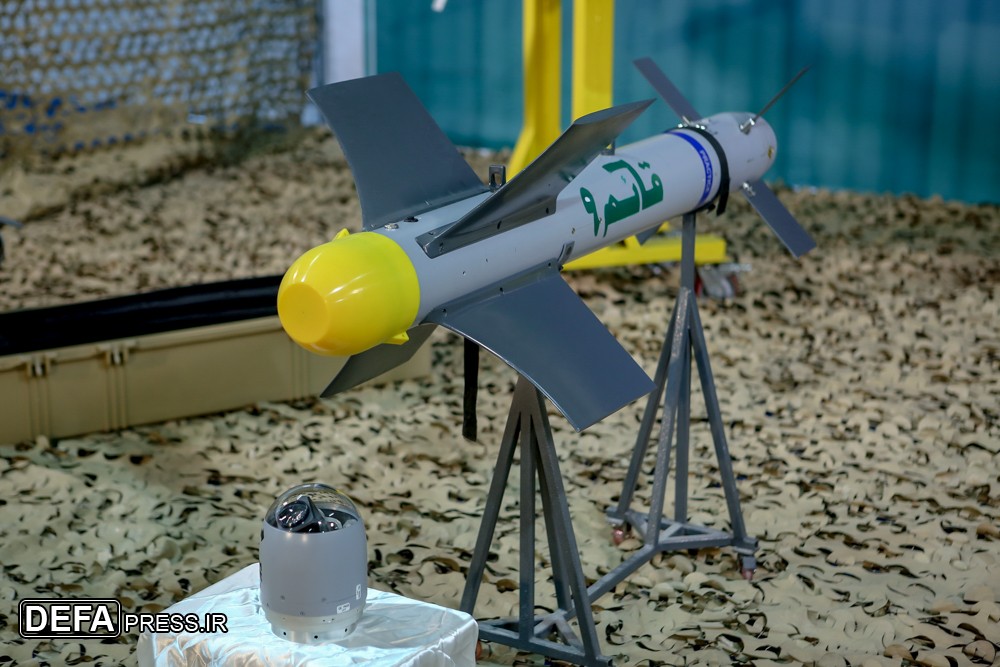 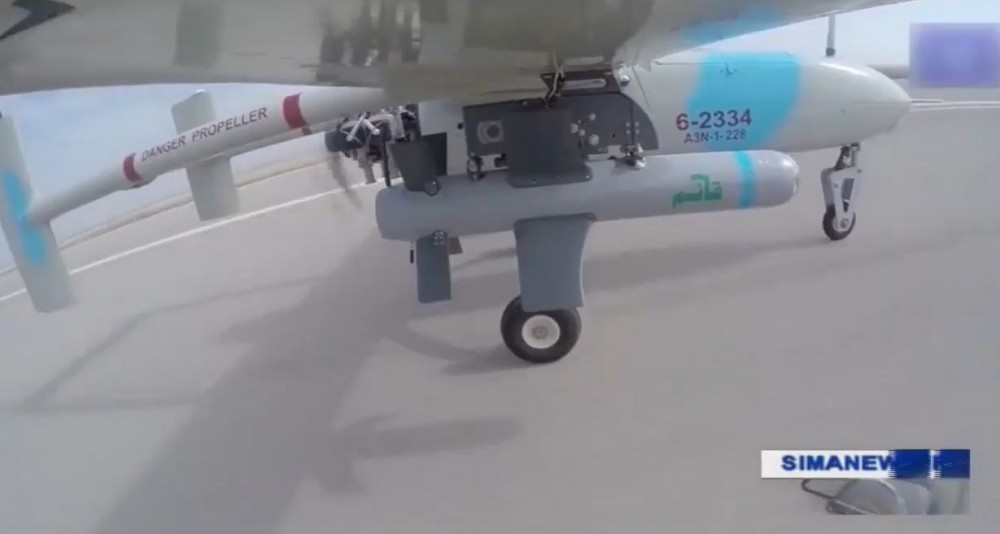 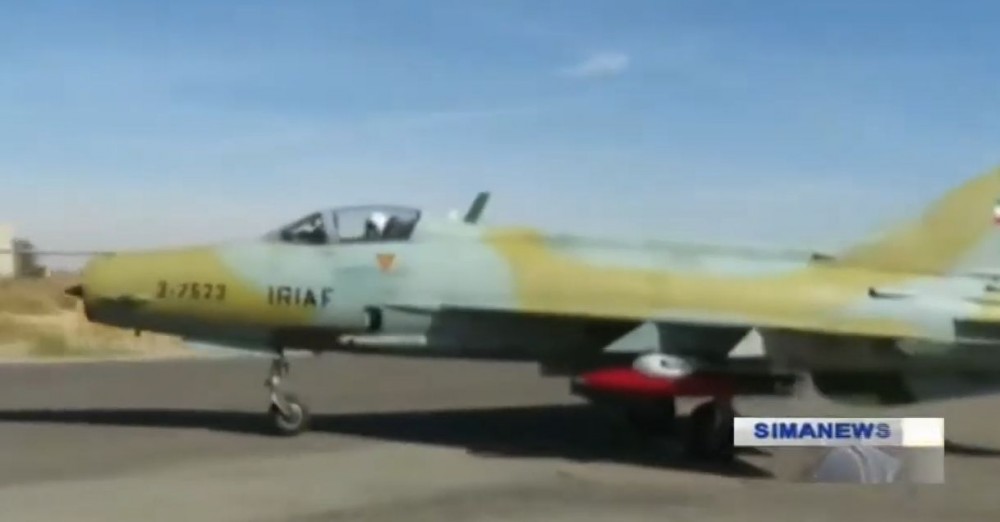 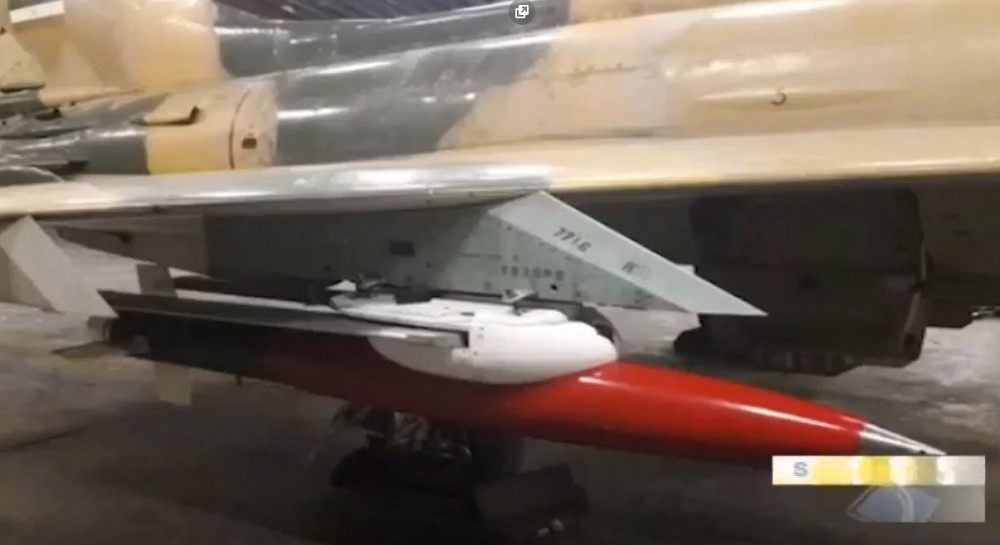 Iran's Revolutionary Guards unveiled Sunday a short-range ballistic missile that they said can be powered by a "new generation" of engines designed to put satellites into orbit.

The Guards' Sepahnews website said the Raad-500 missile was equipped with new Zoheir engines made of composite materials lighter than on earlier steel models.

It also unveiled Salman engines made of the same materials but with a "movable nozzle" for the delivery of satellites into space.

The Raad was "a new generation missile that has half the weight of a Fateh-110 missile but with 200 kilometres more range," it added.

The Fateh-110 is a ballistic ground-to-ground missile first unveiled in 2002. Its latest generation has a range of 300 kilometres (186 miles).

"The complicated achievements on the bleeding edge of global technology that were unveiled today are our key to entering space," Salami said.

Salami noted the movable nozzle on the new engine allowed "manoeuvrability beyond the atmosphere" and amounted to a "leap in modern missile technology".

The new technologies that made the missiles "cheaper, lighter, faster and more precise" could be applied to all of Iran's missile classes, he added.

Tensions between Iran and its arch foe the United States have soared since May 2018 when US President Donald Trump withdrew from a nuclear deal that offered Tehran sanctions relief in return for curbs to prevent it acquiring nuclear weapons.

Washington says it seeks to rein in Iran's ballistic missile programme as well as its "destabilising behaviour" in the region.

It has since slapped crippling sanctions on Iran as part of its "maximum pressure" campaign, with Tehran hitting back by progressively rolling back commitments to the nuclear deal.

The US has also raised concerns in the past about Iran's satellite programme, saying the launch of a carrier rocket in January 2019 amounted to a violation of curbs on its development of ballistic missiles.

Iran maintains it has no intention of acquiring nuclear weapons, and says its aerospace activities are peaceful and comply with a UN Security Council resolution. 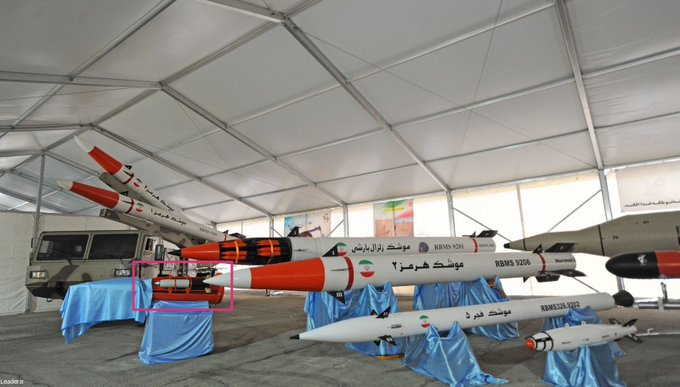 Tests in Iran of aeroballistic missiles

Judging by the shots from Iran that appeared today [May 9, 2020] with cutting various achievements of the Aerospace Forces of the Islamic Revolutionary Guards Corps, they are testing an aeroballistic missile, which was apparently created on the basis of the Iranian 333-mm guided missile Fajr-4. As a carrier, one of the Su-22M4 IRGC-AF fighter-bombers restored and modernized in Iran is used.

In this case, a throw test is probably shown here. 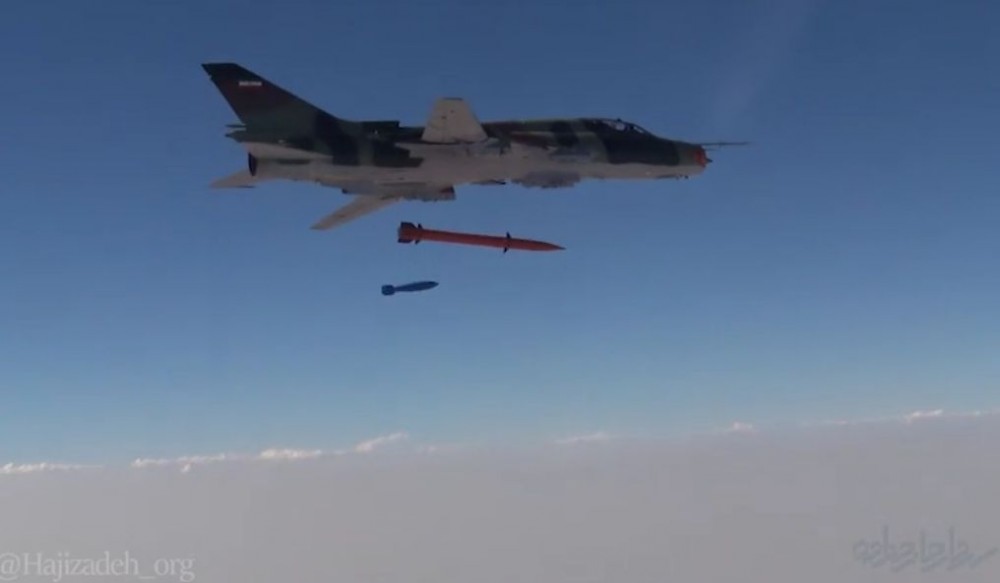 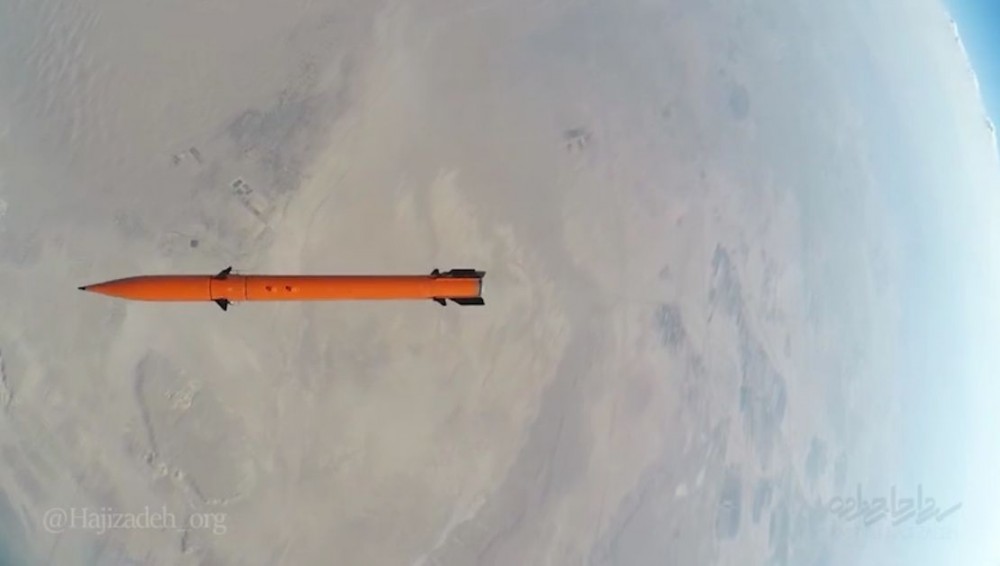 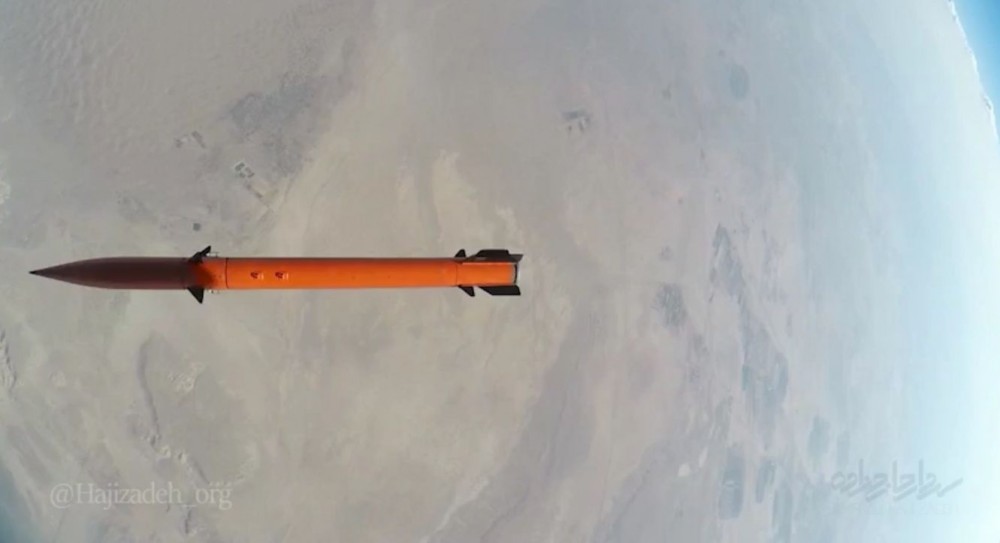 Iran managed to get a US missile with AGM-114R9X blades

The Iranian military managed to obtain several copies of the American special missile Hellfire in the AGM-114R9X version. This is reported by local media with reference to the Iranian Ministry of Defense.

According to published data, the American missiles went to Iran as trophies. The circumstances of receiving the AGM-114R9X missiles are not published, the Iranian military department also does not comment on the method of obtaining American missiles. The media speculate that the Iranian military could have received missiles from an American MQ-9 drone shot down over Syria, and the option of transmitting missile data from Yemen, where the Houthis had previously shot down several American drones, is not excluded. Iran is known to support the Houthis with supplies weapons.

When the missiles were received by Iran, it is also not reported, but it can be noted that the Hellfire AGM-114R9X missile is quite new, its appearance became known in the spring of 2019, when the American edition of The Wall Street Journal first reported the existence of a guided aviation R9X missiles with a special look and specific combat missions. Unlike the base missile, this variant does not have a conventional warhead, but instead has retractable blades.

At the beginning of December last year, a car carrying high-ranking commanders of the Hayat Tahrir al-Sham group, banned in Russia, was hit by just such a missile.

Judging by the fact that Iran has already successfully copied the American anti-tank guided missile AGM-114 Hellfire and launched a clone, designated Ghaem-114, it can be assumed that the AGM-114R9X will also be copied. The option of transferring this ammunition to Russia and China is not excluded, if they do not yet have its samples.