The Situation in the Ukraine. #4

A woman cries after her partner was detained and taken away by Ukrainian security forces at an army checkpoint during a referendum on self-rule in the southeastern port city of Mariupol, May 11, 2014. 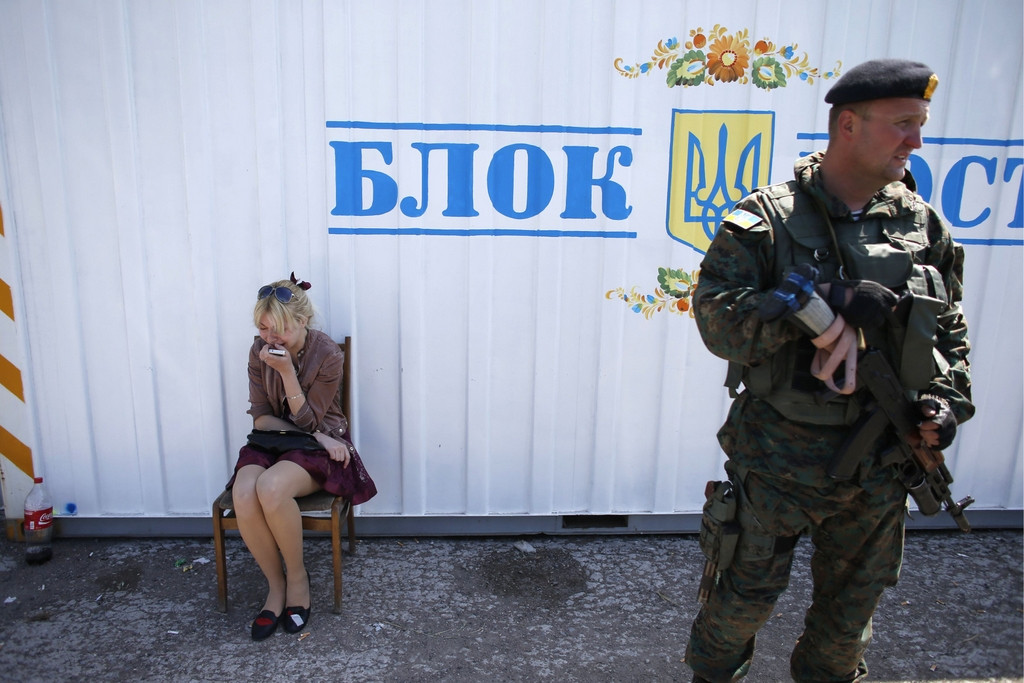 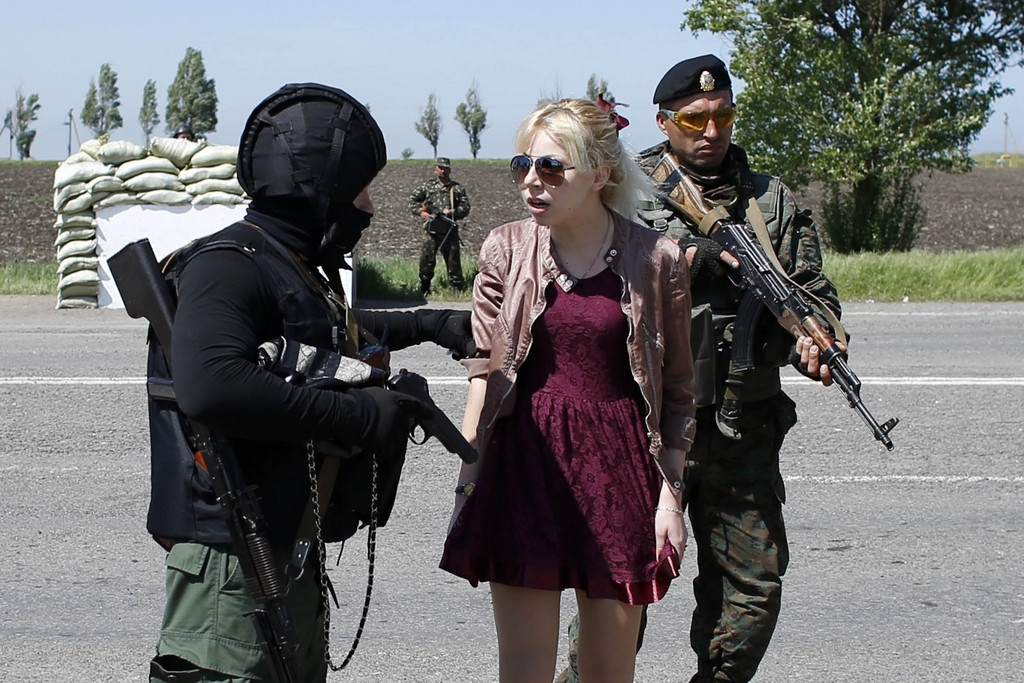 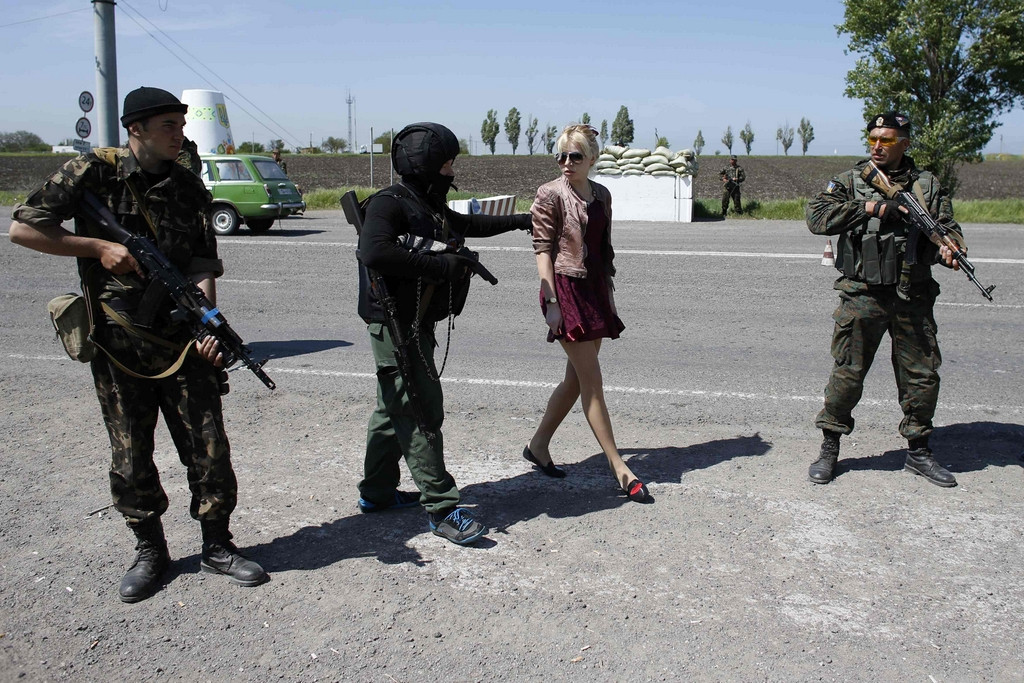 Regular wrote:They were levelling it alright before Russians even entered first war

It was Russian invasion that united them.

NVM, I thought that we were talking about the second.

Vann7 wrote:on Another note..
I can't believe Lukanshenko used those words of fighting Putin.. is that true?
I do not understand his position on Ukraine ,US finance a coup in Ukraine ,help a minority of Nazi radicals to siege power and later finance them ,promote them to kill Assasinate Russians and Ukrainians who reject their authority and protest.. as they did in Odessa. I cannot believe he still believe territory of a nation is more important than millions of lives. When two factions hate each other to death ,is pointless to try to keep them together..while they have ZERO opportunity for future under a Government that call them terrorist and send nazis to burn their houses or kill them.

You can't believe it?

It's been proven time and time again that batka is a weasel looking to backstab at every opportunity.


Folks, can you believe it? Kiev is actually claiming that it was seps who attacked that army outpost

Ukrainian soldiers spoke about the horrific assault of separatists


Ukraine, fighting on the ground to Volnovakha that was this morning , it is now left with three destroyed infantry fighting vehicles , army truck " Zil " two bullets suvarpyti ambulances and along with bullet marks.

Supposedly some Ukrainian helicopter caught up with the bus , but this information is not confirmed .

Ukrainian troops immediately after these events appeared in combat on the ground, claims that there was some carnage . " Three of my friends lie , I can not take them now , because so far it is not. Excerpts battalion commander - not hand him his head, and he was only 27 years old , " - said the combat action participant .

Information about the number of fatalities is slightly different. Temporary Acting President of Ukraine, Oleksandr Turčynovas reported to have killed 13 Ukrainian soldiers . " Donbass " fighters on the ground has data on 14 fatalities. Local health section indicated that injured 31 people . They are taken to local hospitals. However, if all the injured players is a terrorist operation , or between them and the terrorists are not given.

Army analysts argue that the construction of the control post was made some mistakes , and are allowed to hold a cheeky assault.
It should be remembered that at present known to Volnovakha six dead soldiers names . All of them come from Volyn and served in peacetime 51st Motorised Brigade Lutsk .

Apparently separatists got 10 kills and called in an airstrike

Seriously, when it rains it pours for Kiev. PS. Those soldiers are from Volhynia region, most western part of Ukraine
Airbornewolf

Regular wrote:
Apparently separatists got 10 kills and called in an airstrike

Seriously, when it rains it pours for Kiev. PS. Those soldiers are from Volhynia region, most western part of Ukraine

....uh,... on the slight-off chance im wrong. i think the vid shows Pro-Kiev forces taking shelter while the CAS does a number on the anti-kiev protestors.

1) MI-17 marks friendly's with flare
2) MI-24 first does close fly-by to confirm target.
3) in 6:31 i clearly see the Ukrainian flag on the guy's uniform.
4) i cannot see any st.George ribbons on the other guys in the vid to argue they are anti-Kievs troops, and are highly likely Kiev's troops.

^ How I see it as well.
etaepsilonk

Regular wrote:
Apparently separatists got 10 kills and called in an airstrike

Seriously, when it rains it pours for Kiev. PS. Those soldiers are from Volhynia region, most western part of Ukraine

....uh,... on the slight-off chance im wrong. i think the vid shows Pro-Kiev forces taking shelter while the CAS does a number on the anti-kiev protestors.

1) MI-17 marks friendly's with flare
2) MI-24 first does close fly-by to confirm target.
3) in 6:31 i clearly see the Ukrainian flag on the guy's uniform.
4) i cannot see any st.George ribbons on the other guys in the vid to argue they are anti-Kievs troops, and are highly likely Kiev's troops.

Well, officer's talk at the end makes one think that this wasn't quite the case.
And there weren't any "anti kiev protesters" involved in this incident.
Supposedly, this outpost was attacked by right sektor.
Regular

You are missing out FF bit. If you would speak Russian/Ukrainian You could understand that they are talking about hellos attacking their positions. One guy is asking whose are those helicopters. Last bit of video, when camera man prays, you can hear komandir talking about their blockpost being attacked with precise fire. They have firemen there as well and no hostiles. Video was taken some time after the ambush.

Its all video game for you ?

Its all video game for you ?

Do you need help or something??
mutantsushi

etaepsilonk wrote:Lukashenko : I will fight , even if it is Putin
President of Belarus Alexander Lukashenko criticized the separatists organized a referendum in Ukraine and Russia is no longer warns over former Soviet territory after the annexation of the Crimea , Russian media reported .
" Ukraine must be united and indivisible state. And east and west of Ukraine ", - said Lukashenko interview , which was published on Wednesday evening television channel " dosage " ( " Rain " ) .
The two eastern regions of Ukraine on 11 May pro-Russian separatist organize referendums " legally irrelevant " - said Lukashenko .

Well, this is a baseless position that just conforms to Western granting of legitimacy to the coup government...
Which is illegal, and their evisceration/stacking of Constitutional Court is thusly illegal, so there is now no legitimate state body to rule against "separatists".
Foreign backers and junta sympathizers playing "what if" to rhetorically rule against separatists is NOT a replacement for ACTUAL legitimate acts of sovereign state entities.
Self-determination is explicitly ALLOWED by international law, there is no general rule in international law AGAINST nations breaking up,
it is just normally balanced by integrity of sovereign governments, whose legitimate internal processes (e.g. as defined by Constitutions) should ideally govern HOW self-determination is resolved.
So in the absence of action by legitimate Ukrainian State Constitutional Court, the absence of legitimate internal processes of sovereign Ukraine,
the "separatists" are NOT inherently illegal and there can be no assumption that secession is wrong.
That's what you get for over-turning the constitutional order in a revolutionary coup,
other people have their own ideas of the direction they want to take the revolution, and have just as much legitimacy as any other citizen.

Regardless, the resistance has been clear that even if they are inclined to join Russia, they are open to some sort of discussion with the rest of Ukraine, possibly some confederation like Bosnia, etc,
and clearly they are interested in the trajectory of Ukraine as a whole, and the rest of Novo Rossiya in particular, so are hardly just narrowly aiming at separatism of Donbass, but are playing a political role in the evolution of Ukraine.

Regular wrote:Who cares if they are soldiers or clerks. They represent Junta.
They represent hostile faction. You think they have never attacked any checkpoints?

Comparing the number of DPR checkpoints that have been attacked (and the # of attackers in each case), with the total number of UA army, national guard, and banderist militia in the area (tens of thousands), clearly most UA military in the general area have NOT taken part in an actual assault on a checkpoint.
Vann7

Meanwhile while Russia busy with Ukraine and conferences for economy.. US,Israel and Jordan are conducting military "exersizes"
with 16,000 troops at Syria Golan Border. And Israel claim they could move to real use if they feel Hezbolah could attack them. LOL

So don't be surprised if we see a major war in Syria against US-Israel soon from the southern border. Presidential elections are schedule for June,, and NATO wants to sabotage them at all cost , So that no countries recognize them. My guess they want to use their armies as a trojan as a shield  to smuggle thousand of terrorist into Syria and then leave.. On the positive Side Syria have been preparing for such scenario since the conflict began.. and have said they have a Big Surprise against them.

So there could be a major war anytime soon.. with such deployment of troops.. you first start a false flag and then blame Syria for it ,then invade.  The reason why U S and Israel are increasing its hostilities against Syria is because they are winning the war and liberating a town almost every day or two. They achieved major victories recently in all Syria that can potentially collapse the entire NATO proxy terrorist war.

A good place to follow the Syrian war with details...

Soon they might have enough to form a mech. battalion
arpakola

Before they were raided from RS and 10 of them executed.
It is very obvious that these people didnt came to fight 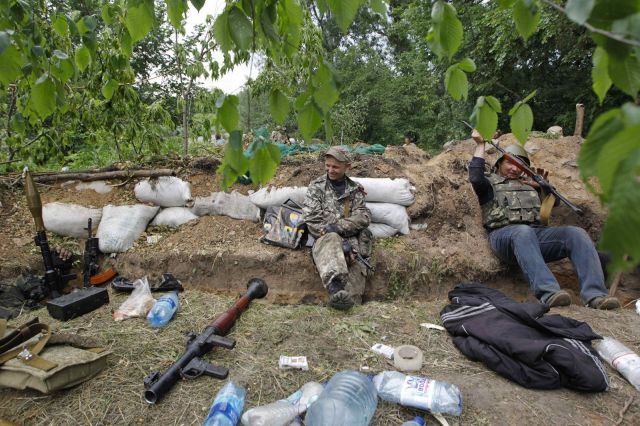 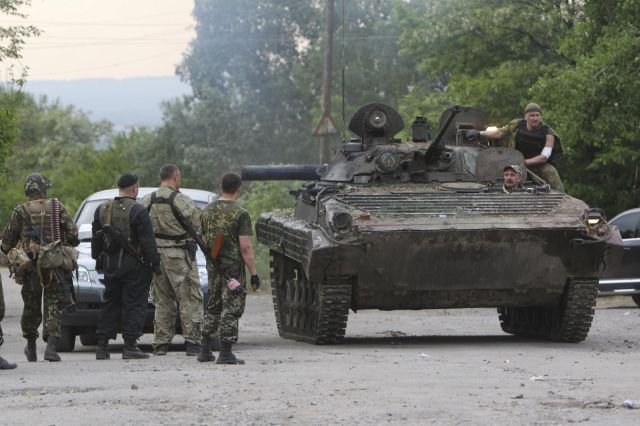 That clown Charles Windsor/Coburg/Goethe or whatever his real name is today is absolute scum.
This so called monarchy is supposed to have no opinions on politics. In reality, they control all the organs of power of Britain's feudalist joke of a "democracy".

In truth, they are all Nazis, murderers, closet homosexual rapists, bribe takers or other sorts of vermin.

No one attached to the Establishment ever has the balls to challenge them. Whether its so called leftist politicians, actors, singers, judges, the whole lot. Even the head of the supposed Labour party (basically an upper class homosexual) had the neck to defend this big eared feudalist prick.

Buckingham Palace is certainly one good place for a regime change.
Cyberspec

Reports emerging on the Runet, about the heavy clobbering of the Dnepr battalion (Kolomoiski's private mercenary army). Sounds like they were virtually wiped out. Apparently the regular Ukr. Army refused to help them. Yarosh (leader of RS) is barking mad on social media and screaming betrayal
Regular

Very good news if those men in black are finally wiped out!
Here You can see Bes with weapons captured after they wiped out Ukr troops. Look private bank vans with bullet holes

The electronic system of the CEC of Ukraine destroyed (Central Election Commission of Ukraine)!!

The electronic system of the CEC of Ukraine destroyed (Central Election Commission of Ukraine)!!
http://www.cyber-berkut.org/
http://en.wikipedia.org/wiki/Central_Election_Commission_of_Ukraine
American company SOESoftware continues to perform direct control of the will (election results) of the people of Ukraine.

from the destroyed Bandera batalion

from the destroyed Bandera batalion 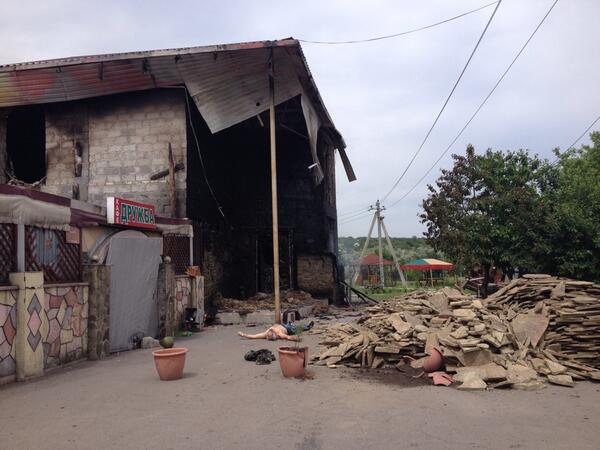