What do you mean by safe?

With Pantsir-M it'll have 32* 20km range missiles in a system intended to defend against modern saturation attacks & proven to be able to hit a range of targets in Syria, thats a heck of a lot of Air Defense for a 900ton ship.

But on its own & away from other defenses its far from invulnerable.
Mig-31BM2 Super Irbis-E

Is Panzir-M sure it will get on the ship?
The-thing-next-door

It will not provide 360 degree coverage like Kinzhal, Shtil or Redut.
hoom

Is Panzir-M sure it will get on the ship? The solemn ceremony of raising the flag took place at the pier in the center of Sevastopol. Before that, the Andreevsky flag of the ship was consecrated in the temple of the Archangel Michael - one of the main temples of the Black Sea Fleet.

"Congratulations to the personnel on the entry of the ship into the Black Sea Fleet. <...> It became the ninth ship of the Buyan-M series, the capabilities of this weapon were repeatedly and convincingly demonstrated to the world by the ships of the Black Sea Fleet and the Caspian Flotilla during missile attacks on terrorist positions in Syria ", - the Chief of the General Staff - First Deputy Commander-in-Chief of the Russian Navy, Alexander Vitko, addressed the crew.

The commander of the Black Sea Fleet, Igor Osipov, specified that in 2021 it is planned to accept about 10 more ships and vessels in the fleet.

Small missile ships of project 21631, built since 2010 for the Russian Navy, are multipurpose ships of the "river-sea" class. They are equipped with the most modern artillery, missile and radio-technical weapons, including the Kalibr-NK missile system. "Grayvoron" will be the fourth MRK of project 21631 on the Black Sea. As part of the Black Sea Fleet, the crews of three ships of this project are already performing tasks: Vyshny Volochek, Orekhovo-Zuevo and Ingushetia. 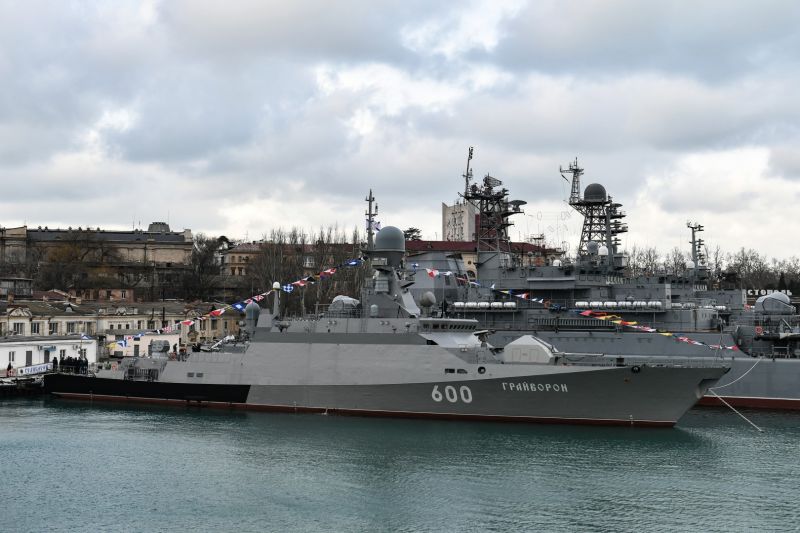 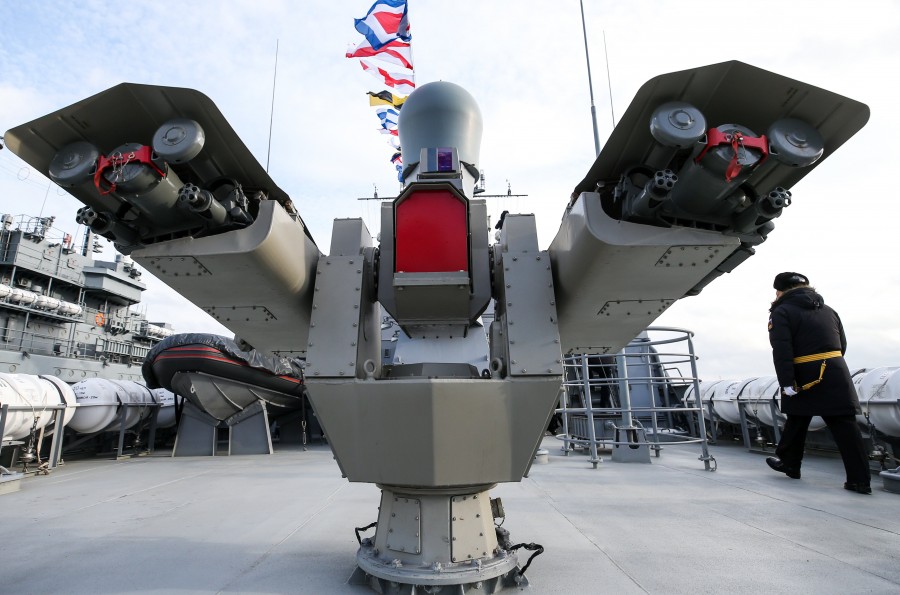 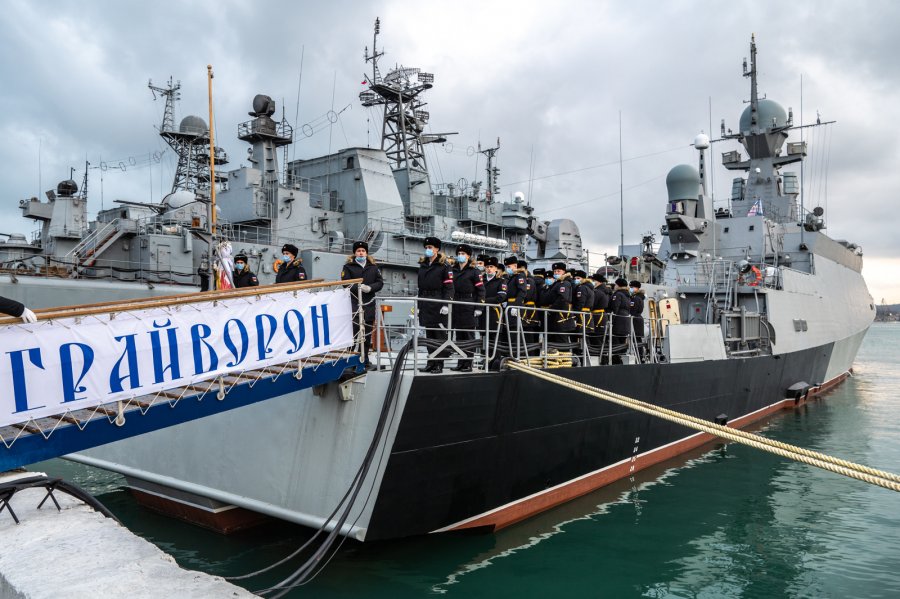 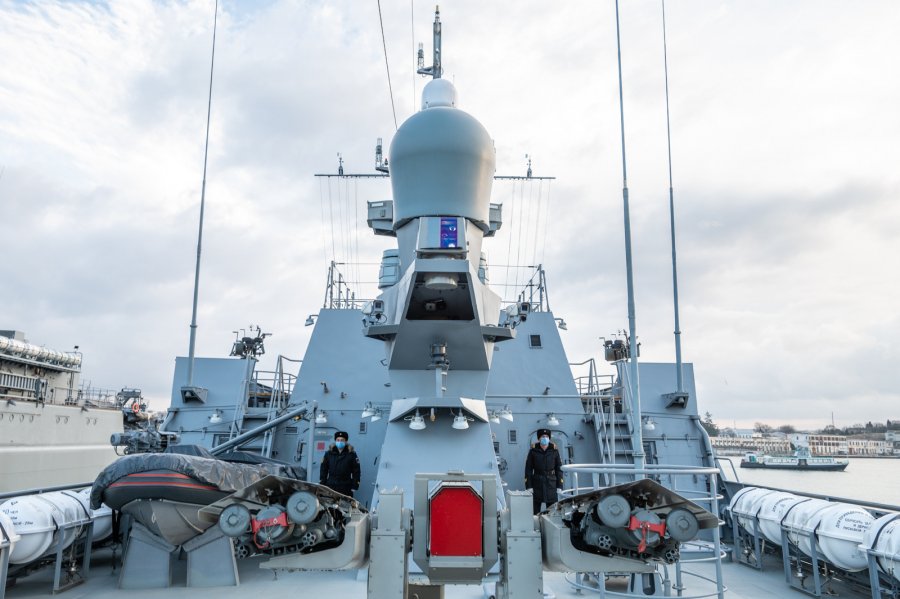 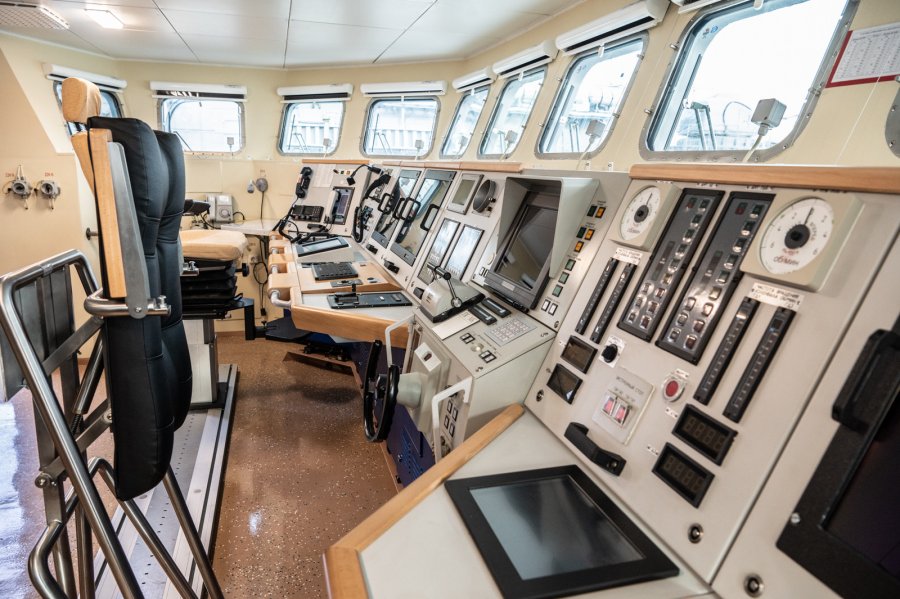 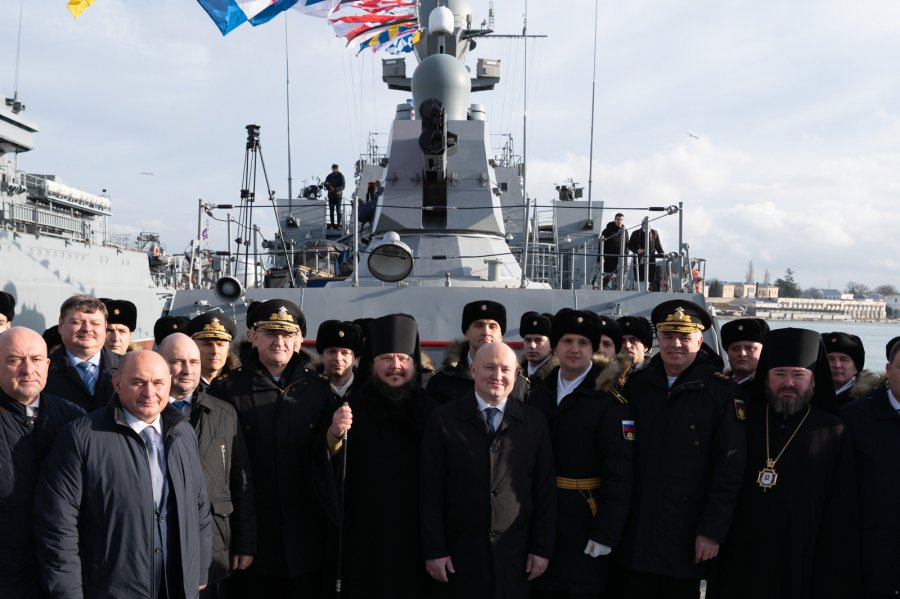 No PanzirM. Which boat is that? 9?
George1 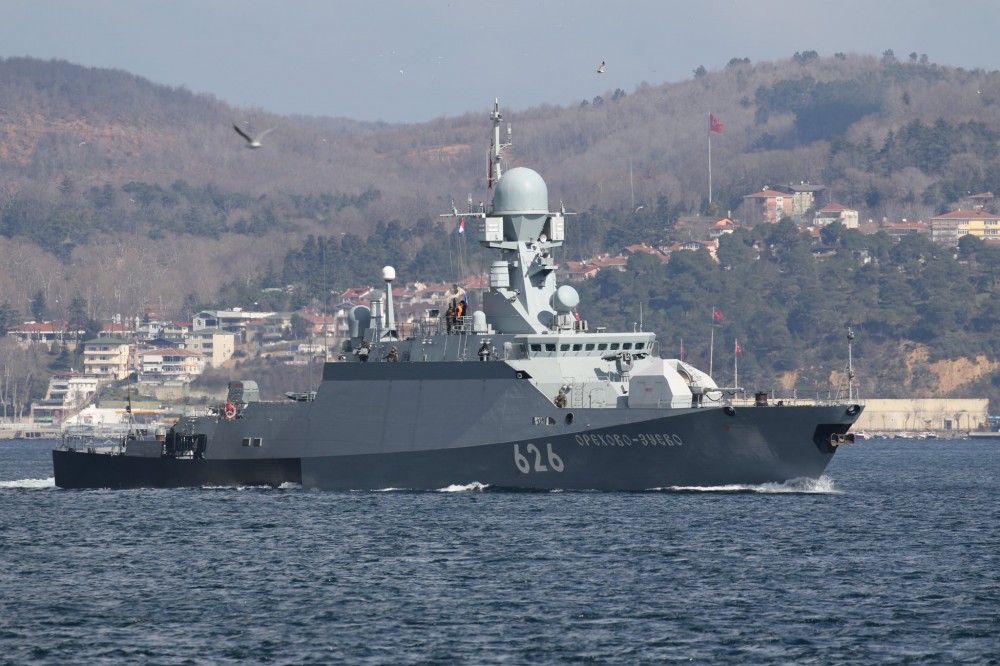 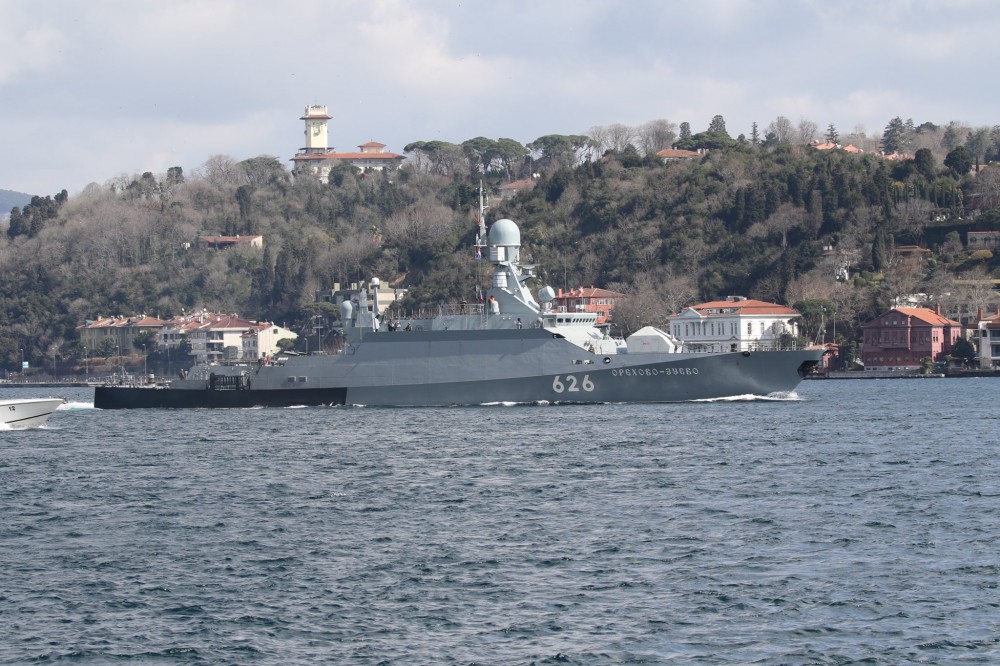 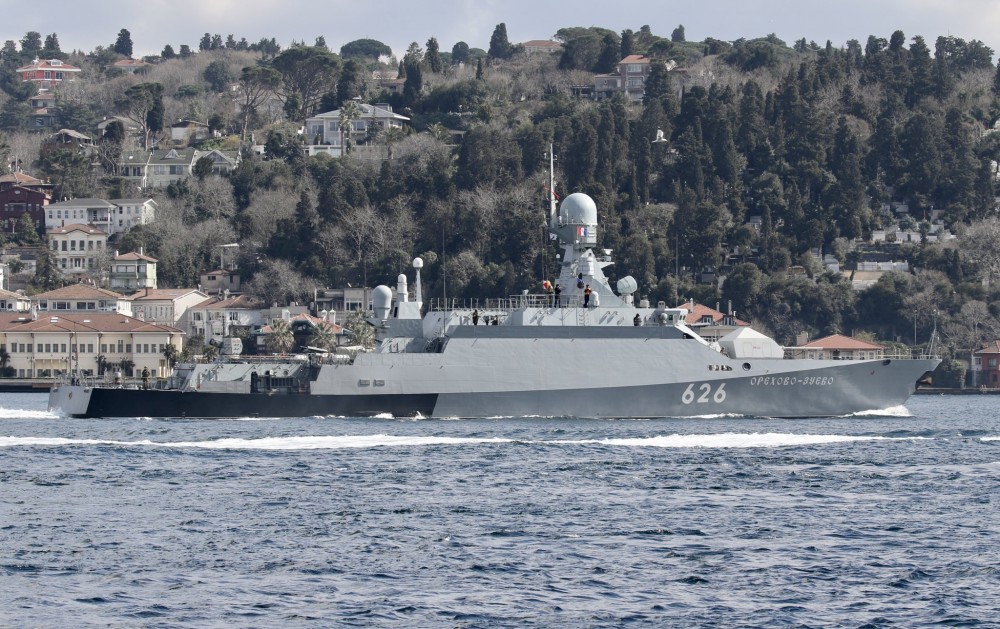 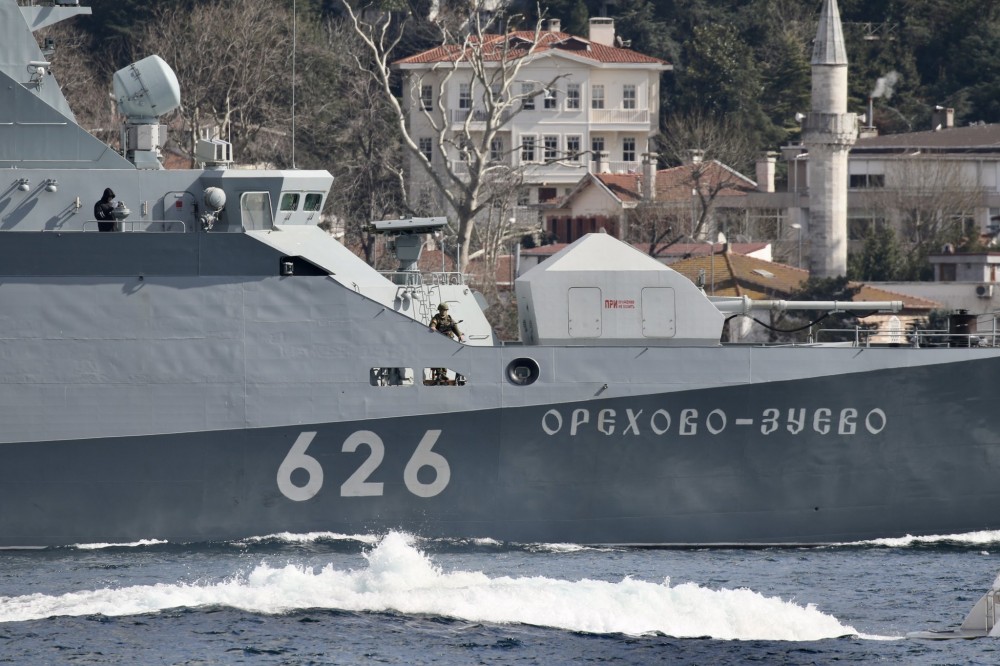 "The small missile ship Grad will be floated out this year and the ceremony is planned for Republic of Tatarstan Day (August 30). In accordance with the plan, the corvette Naro-Fominsk of the same Project is set to be put afloat in the first quarter of 2022. Both ships are scheduled for their delivery in 2022 pursuant to the state contract," Mistakhov said.

The third same-type warship Stavropol will be delivered within the timeframe stipulated in the state contract, he added.

As of today, "it is yet unknown about the plans to continue the construction of Project 21631 corvettes or their modifications, the corporation’s head said.

"If a decision on the construction is made, the Project of the upgraded ship can be prepared within no more than six months and we have laid the groundwork for that," Mistakhov assured.

"Currently, nine ships of this Project: the lead ship Grad Sviyazhsk and the serial-produced corvettes Uglich, Veliky Ustyug, Zelyony Dol, Serphukhov, Vyshny Volochyok, Orekhovo-Zuyevo, Ingushetia and Graivoron are already operational in the Russian Navy while three more ships, the Grad, the Naro-Fominsk and the Stavropol are under construction in the Shipyard’s slipways," he said.

Some of the Buyan-M-class missile corvettes delivered to the Russian Navy struck terrorist targets in Syria with Kalibr-NK cruise missiles.

Project 21631 Buyan-M-class small missile ships are next-generation multi-purpose missile/artillery ships. They are designated to carry out patrols to protect lanes in open coastal waters of seas, oceans, inland seas and navigable rivers. The Kalibr-NK cruise missile system as their basic strike weapon allows these corvettes to hit both enemy surface ships and ground facilities located at a considerable distance from the coastline.

As their basic armament, Project 21631 corvettes carry the Kalibr vertical launching system of eight cruise missiles with an operating range of up to 2,500 km, a 100mm A-190 artillery gun and anti-aircraft weapons.

Renat Mistakhov added that the AK Bars shipbuilding corporation was ready to initiate an upgrade to the Project 21631 Buyan-M type fast attack guided missile craft and had presented relevant offers with supporting material to the Russian Navy.

"The upgrade potential of Project 21631 fast attack craft is huge and such deliberations have therefore been made and presented to the Navy for consideration. We hope the Navy will take an interest in these proposals," the top manager said.

The Zelenodolsk design bureau developed four export versions based on the Project 21631 fast attack craft, Mistakhov said. These are a fast attack guided missile craft, an escort ship, an anti-submarine warfare corvette and a patrol vessel of Project 21635 Sarsar, the chief executive said.

"Each of these versions has its designation, delivers its tasks and has its own shipbuilding elements and weapons," Mistakhov added.

The International Military-Technical Forum Army-2021 is being held from August 22 to 28 in Kubinka, the Moscow Region.

Grad is first of the last 3 ordered, should be first with Pantsir-M 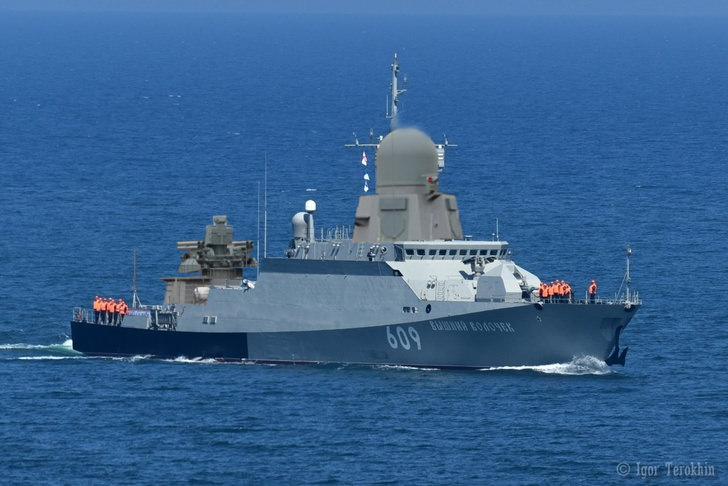 Probably for the better: an actual 12 ship build of Russian ships that are to nearly identical specs.

hoom wrote:....Probably for the better: an actual 12 ship build of Russian ships that are to nearly identical specs.

They should so this more often 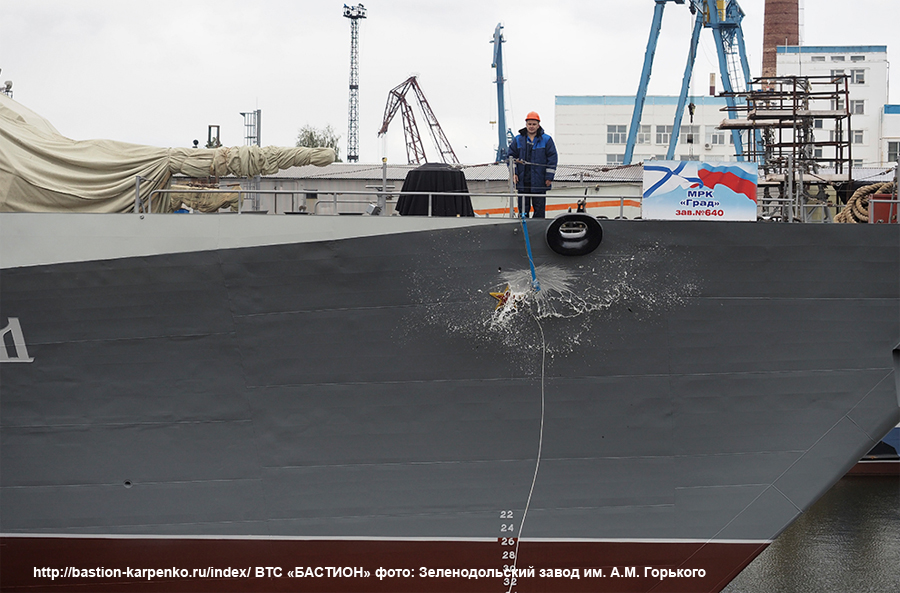 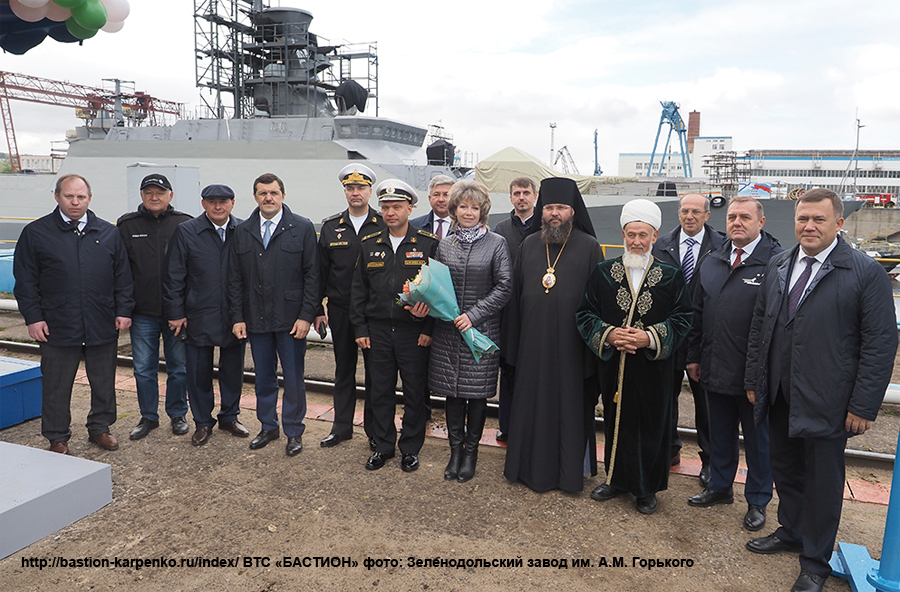 Protected by both the God Emperor and the Omnissiah

Is it an imam on the right ?
ALAMO

Yes, they are in Tatarstan. 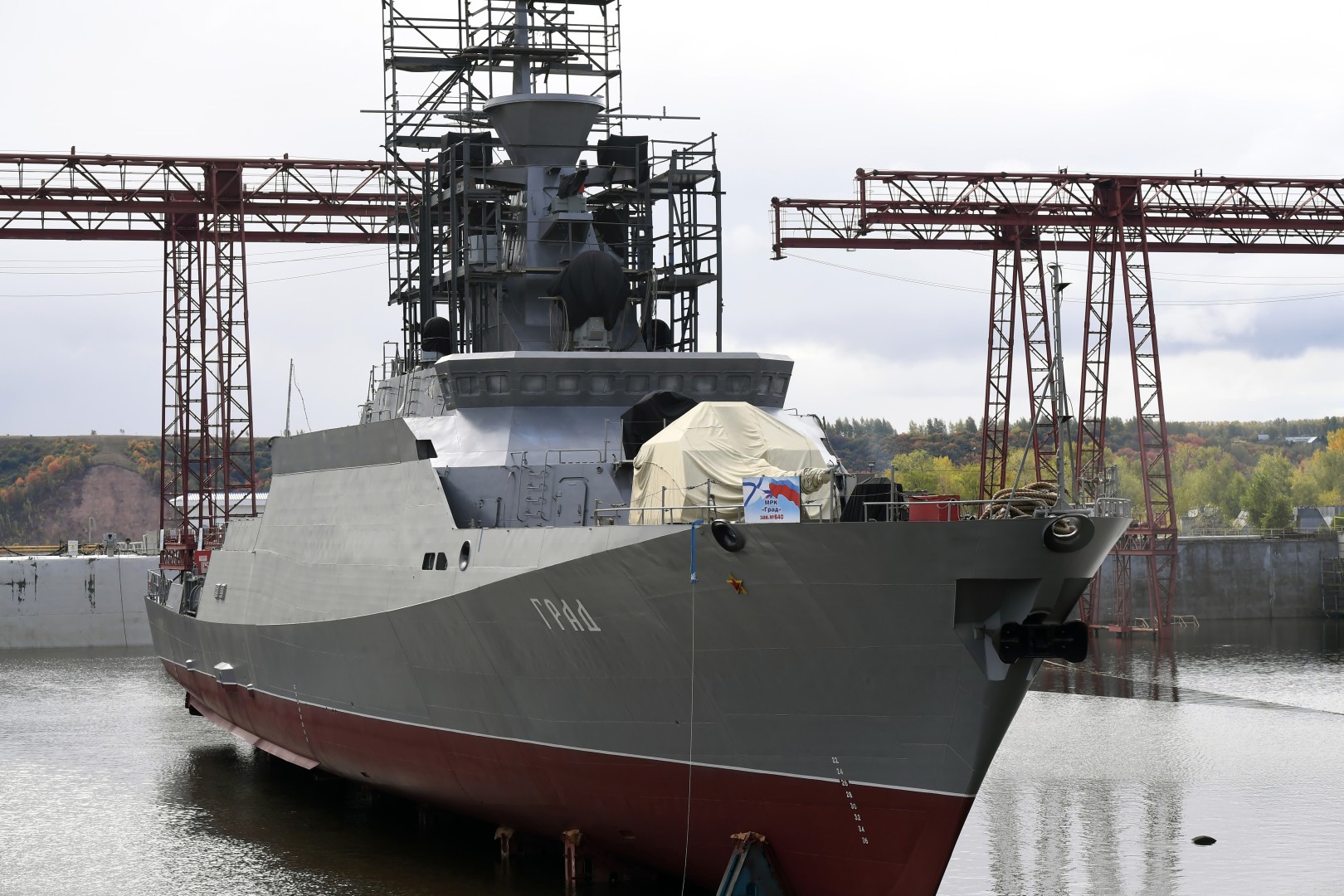 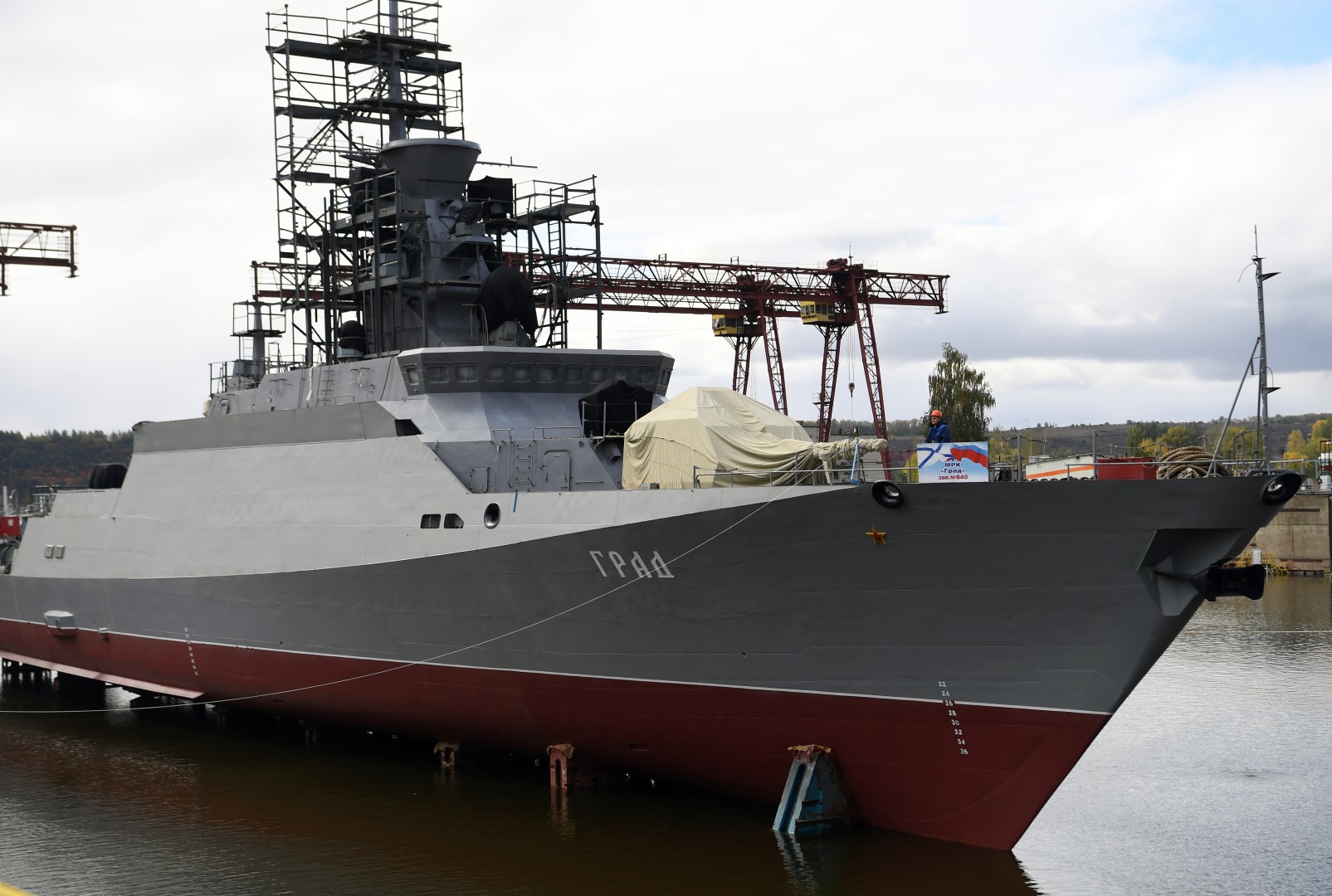 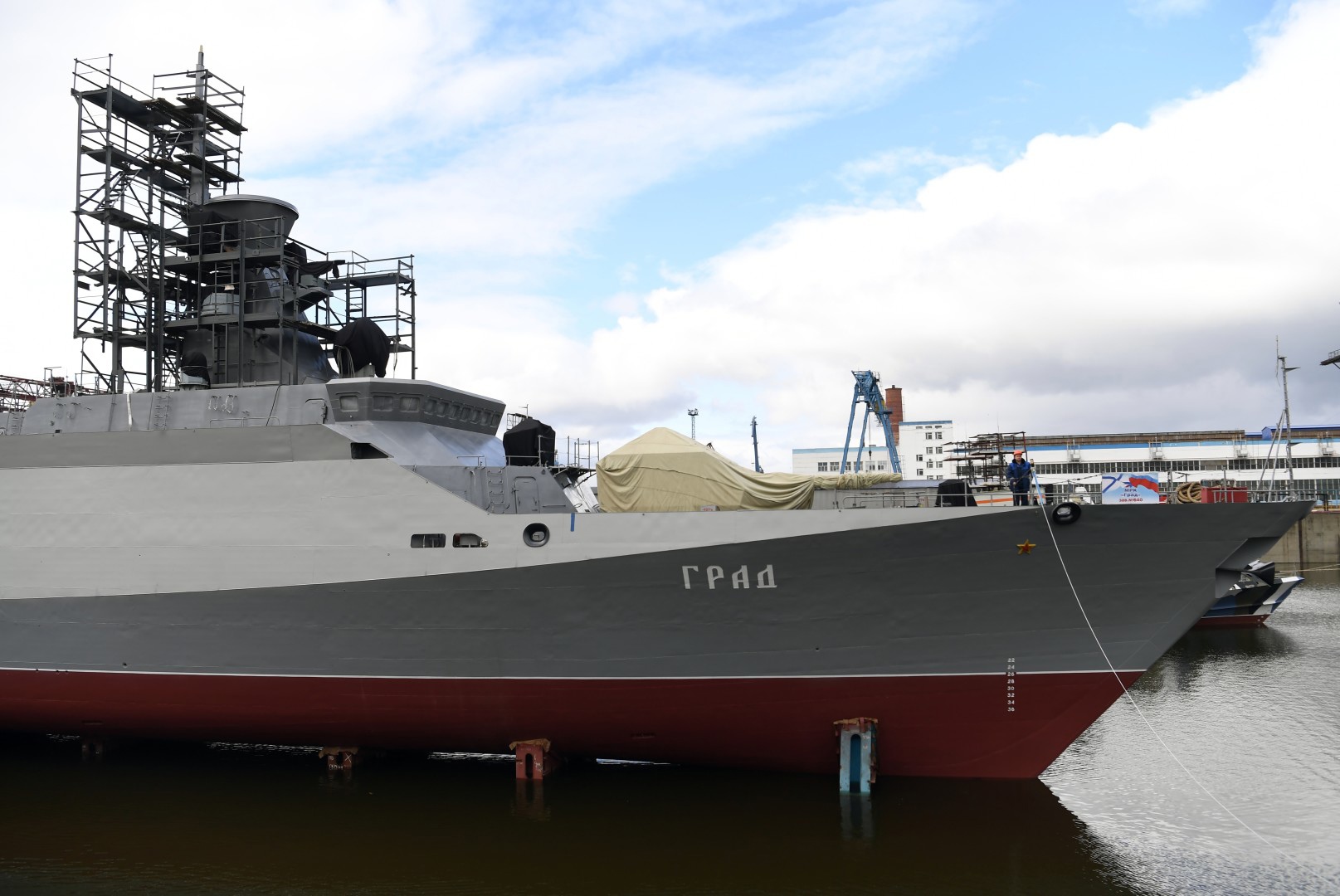 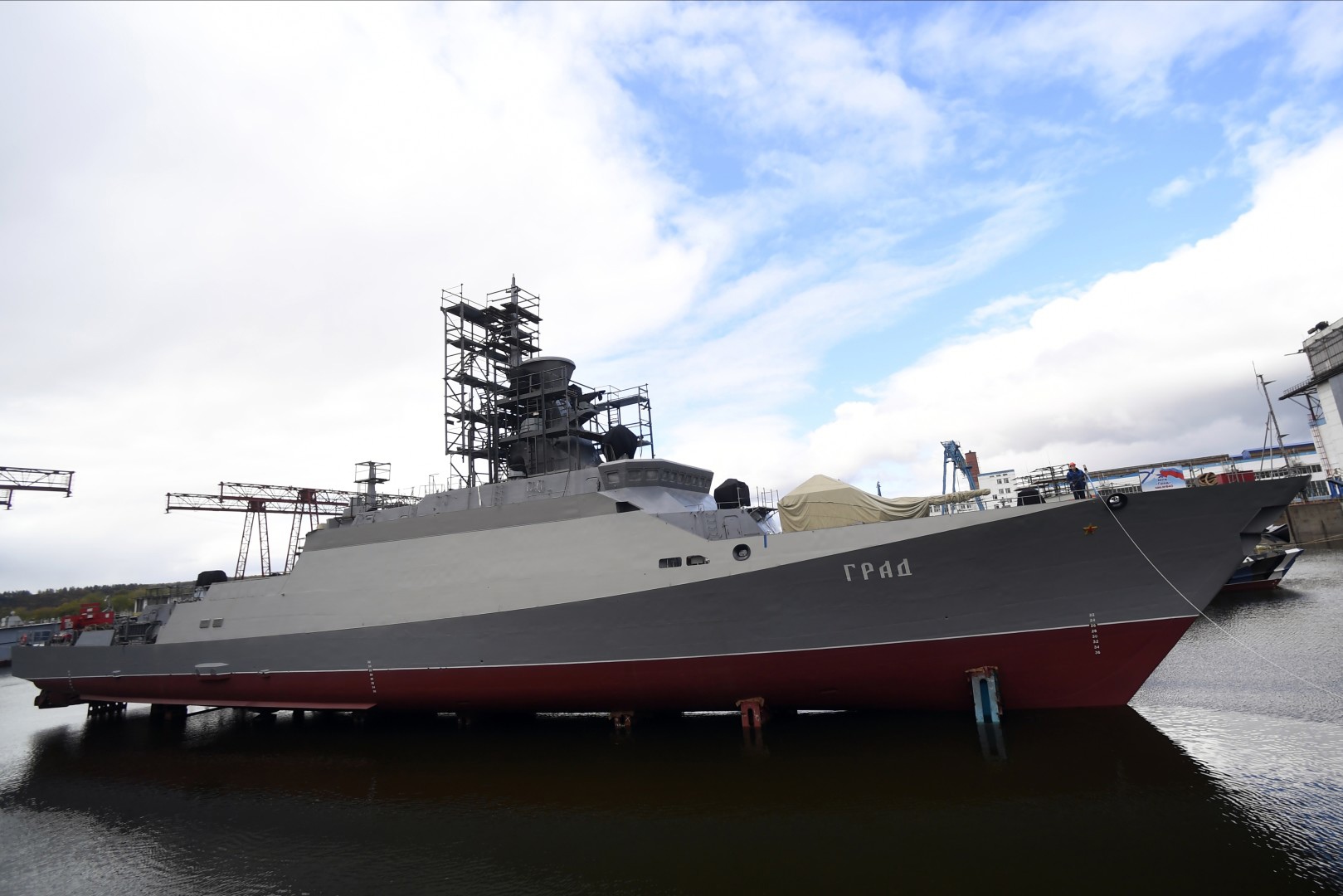 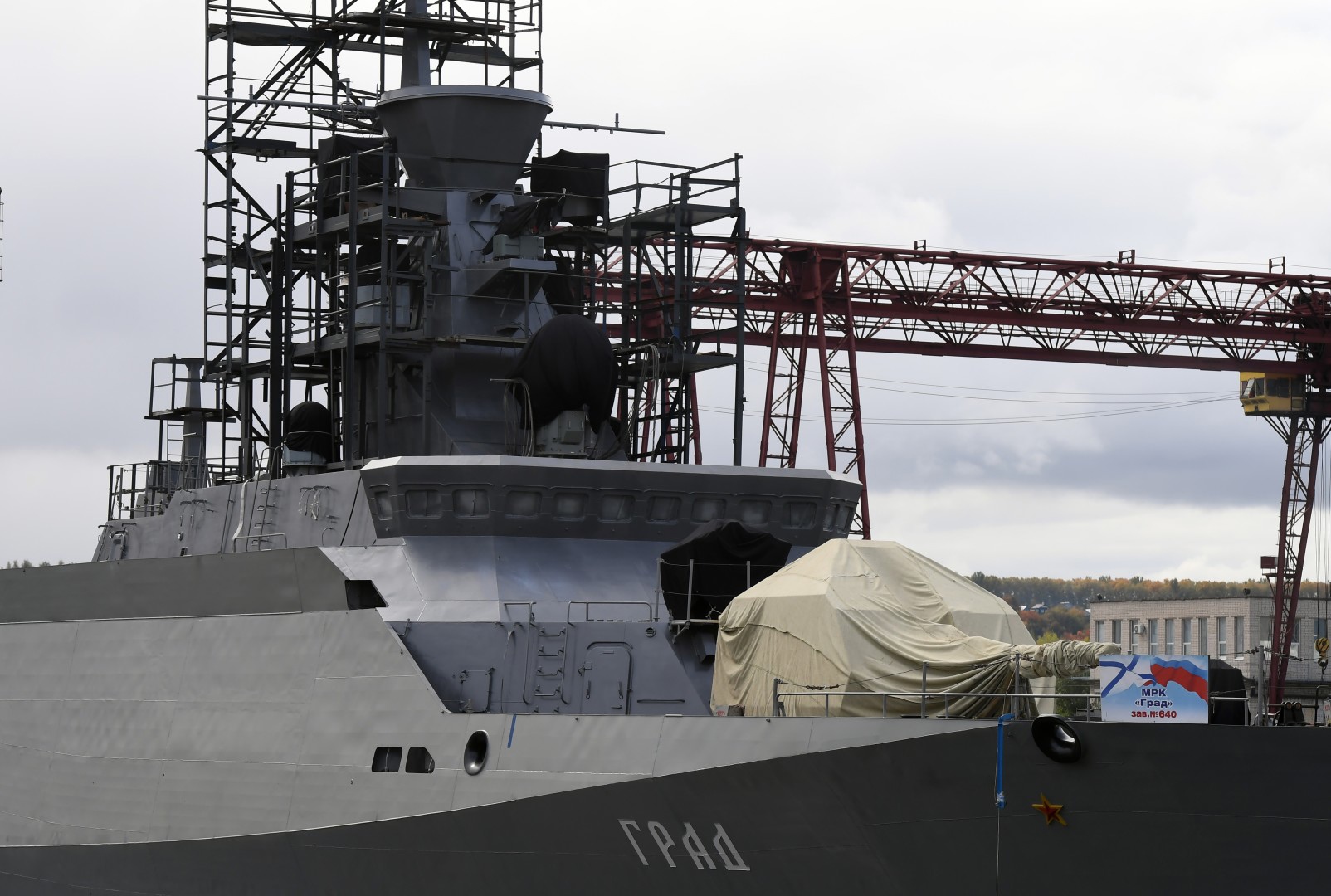