Werewolf wrote:Do you even know how many kosovarians are here in germany from all yugos? There are like 80% kosovarians and bosnians, the rest are serbs but almost all off them refer to themselfs as yugos rarely anything else except serbs.

I wonder why actually. They tend to bark on Yugoslavia alot when they come home during summer

That is exactly what i get here, lot bitching about Yugoslavia but at the same time weird relationships to germany and yugoslavia, but from part of them i hear alot of pro-russia stuff, to some part some are not as random as they strike one, care for politics and the fact that US(NATO) committed warcrime against Yugo's at the same time trying to be uptodate on politics, which the germans literally do not do unless you ask the old reservists of the Bundeswehr, they are surprisingly uptodate and with more correct informations than you would expect, certainly not consumers of CIA financed german propaganda.
Guest

"BREAKING: German police have arrested 3 persons from Kosovo in a Belgian car near Rosenheim after receiving a tip off of a possible terror attack."

Militarov wrote:"BREAKING: German police have arrested 3 persons from Kosovo in a Belgian car near Rosenheim after receiving a tip off of a possible terror attack."

In the article “Kurdistan – Turkey’s Kosovo” Prof. Sotirović compared different aspects of Turkish Kurdistan case to the Kosovo one, found some parallels and pointed out Turkey’s hypocrisy.
While Prof. Sotirović is right in his assessment that Turkey is hypocritical to say at least, he failed to expose the fundamental differences between Kurdistan and Kosovo. His article contains some inaccuracies, misinterpretations and lacks in detail. Such an imprecise comparison may lead a reader who is not familiar with Balkans to acquire a false impression. A reader might come to conclusion that Kosovo Albanians had experienced the same level of suffering and injustice as did the Kurds which later led them to rebellion. That would seriously mislead the readers . To substantiate this view let’s point out few errors in the article in question.

Status of the minority

Albanians were in a completely opposite situation. Its ethnic minority in Yugoslavia was recognized. Their language was recognized too. Albanians did have their ethnic state, Albania, while Kurds never enjoyed such privilege. Besides, Albanian minority had their own unique ethnic university in Kosovo since 1969 (no Western “democracies” have ever allowed its minorities to establish universities). In 1974, to appease endless Albanian minority irredentism and their sporadic violence, the Yugoslav government carved out a part of historic Serbian land of Kosovo as Albanian autonomous province (this act can be compared to Khrushchev’s selfish donation of Crimea to Ukraine in 1954).
Nevertheless, Albanians, inspired by anti-Yugoslav circles in the West, renewed disorders in 1981 demanding federalization. Please take note that 1981 was long before strongman Milosevic appeared. In fact, Milosevic rose to power in 1989 promising people that he would put an end to Albanian violence in Kosovo. So if we compare humiliated Kurds in Turkey and privileged Albanians prior to their insurgency in 1981, we must say the two cases are fundamentally different. 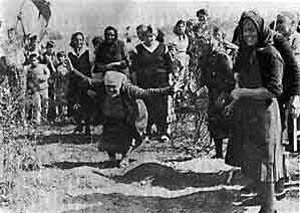 Serbian grandmother Anna weeps at the graves of twin infants dug up by Albanian attackers in Grace in Kosovo, 1988.
The bellicose component:

… the KLA [Kosovo Liberation Army] – a typical terrorist organization as a replica of the PKK, the IRA, the ETA or the Hezbollah.

This is implicitly wrong. KLA is a paramilitary wing of deeply-rooted Albanian mafia (for better understanding of the history, nature and cultural background of Albanian mafia please read very insightful Jana Arsovska’s article “Gender-based subordination and trafficking of women in ethnic Albanian context. The upward revaluation of the Kanun morality” [Journal of Moving Communities, vol.6, No.1, May 2006]). his new brand name, Kosovo Liberation Army, was coined for mere propaganda purposes. The intent was to give a false impression to the western audience that the US-backed project was actually a fight for someone’s freedom, which, if true, would be a legitimate cause. KLA (read Albanian mafia) was armed, trained, and injected into Yugoslavia by CIA. They still keep supporting it up-to-date in its citadel of Kosovo. By contrast, the name of Kurdish Workers Party reflects the Marxist ideology of their leader. The name does not appear to have been fashioned to appeal to tastes of Western mainstream media propaganda consumers.

For the matter of comparison, during the Kosovo crisis in 1998−1999 both the West and the US saw the terror acts carried out only by Serbia’s government…

If we compare tens of thousands of obliterated and hundreds of thousands expelled Kurdish civilians in Turkey from 1978-present with the “terror acts carried out by Serbia’s government”, the picture will not be that impressive:
“One year later, the International War Crimes Tribunal, a body in effect set up by NATO, announced that the final count of bodies found in Kosovo’s “mass graves” was 2,788. This included combatants on both sides, Serbs and Roma murdered by the Albanian KLA as well…” (John Pilger, Reminders of Kosovo) In addition, can any of the following terror-related facts justify the struggle for self-determination?

“Indeed, even as Blair the war leader was on a triumphant tour of “liberated” Kosovo, the KLA was ethnically cleansing more than 200,000 Serbs and Roma from the province. Last February the “international community”, led by the US, recognized Kosovo, which has no formal economy and is run, in effect, by criminal gangs that traffic in drugs, contraband and women. But it has one valuable asset: the US military base Camp Bondsteel, described by the Council of Europe’s human rights commissioner as “a smaller version of Guantanamo” (John Pilger, Don’t Forget Yugoslavia)

Guests on the land

… [Kurds are] the oldest population in Turkey living in Anatolia almost 3.000 years before the first (Seljuk) Turks came there at the end of the 11th century.
For the matters of accuracy, we should also remark that the state in 1999 was Yugoslavia, and not Serbia.

Opposite is the case of Kosovo Albanians. According to a Turkish census made in Kosovo in 1455 (!), there were 13,000 Serb households and only 46 Albanian there. Since Kovoso Albanians obtained factual “independence” in 1999, they are busy desecrating, detonating and turning into rubble the unique medieval Serbian churches and monasteries throughout Kosovo. Only four of many Serbian monasteries in Kosovo are included in the UNESCO World Heritage list, but they are still endangered despite kind of protection from the international peacekeeping forces. Hundreds of other Serbian cultural sites there are subject to total elimination due to barbaric Albanian “self-determination”. In this sense Kosovo should be compared not to Kurdistan, but Daesh/ISIS.

Is Kosovo in turmoil?
George1

BELGRADE, October 30. /TASS/. Serbian President Aleksandar Vucic has called for unity of the Serbian people on the Kosovo problem.

"The Albanians are totally consolidated, all their parties are consolidated. I don’t mean that all parties in Serbia must consolidate but national unity is needed. We need people’s strength now more than ever before and we will spare no effort to defend the interests of the Serbian people," he said on Tuesday at a cabinet meeting that was attended by representatives from Kosovo and Metohija.

He said that he had information that Kosovans were plotting seizure of a part of the Serbian electricity grid in the south of the country. "They [Kosovans] claim that our electricity grid is hampering free movement of electricity thus forcing them to steal electricity. After that, they plan to accuse us of being unable to control the grid, oust our company and substitute it for Albania’s KOSTT," Vucic said.

Apart from that, the Serbian leader noted that in late November Albania will celebrate its Flag Day and plans to time the establishment of a Kosovo army to that holiday, despite the fact that it runs counter to United Nations Resolution 1244. Moreover, Interpol is expected to discuss Kosovo’s application for joining that organization.

But despite all that, Belgrade will continue to invest in Serbian-populated areas in Kosovo, Vucic pledged. In his words, it is planned to spend 50 million euro on the construction of a clinical center in Kosovska Mitrovica and a hospital in Gracanica. It is also planned to invest in the agrarian and tourism sectors, in infrastructure, water supplies systems and education, the Serbian president said.

Serbia’s Autonomous Province of Kosovo and Metohija unilaterally proclaimed independence in February 2008, which was recognized by the United Nations Court of Justice in 2010. By now, according to Belgrade, Kosovo has been recognized by 105 world nations, while Pristina says there are 117 such countries. More than 60 countries, including Russia, China, India, Israel, Greece and Spain, are categorically against recognizing Kosovo’s independence.

United Nations Security Council Resolution 1244 has it that Kosovo and Metohija are part of Serbia. The document provided for the establishment of international civil presence in Kosovo - the United Nations Interim Administration Mission in Kosovo (UNMIK) - to establish an interim administration for Kosovo that was granted a broad autonomy. The UNMIK enjoyed legislative and executive authority and regulated Kosovo’s judicial system. After Kosovo proclaimed its independence on February 17, 2008, the mission focused on security and human rights issues.

In the recent months, Belgrade and Pristina have been negotiating a compromise solution based on adjustments of the border and exchanges of territories. The United States supports this idea and insists on a final agreement committing to paper adjustments of the border between Serbia and the unrecognized republic. Meanwhile, German Chancellor Angela Merkel spoke against any border changes in the Balkans and noted that all the countries of that region have chances to be admitted to the European Union.

BELGRADE, December 14. /TASS/. The parliament of the unrecognized republic of Kosovo has approved the creation of an army based on the Kosovo security force.

Three bills were put to the vote, which stipulate the formation of a Kosovo army. As many as 106 lawmakers supported a bill creating a defense ministry, while 105 voted in favor of a bill turning security forces into an expanded army. The same number of parliament members supported the third bill, which concerns service in the Kosovo security force. Members of the Serb List party walked out and did not take part in the vote.

Following the passing of the bills, Kosovo leader Hashim Thaci and Prime Minister Ramush Haradinaj congratulated the lawmakers and the people of Kosovo.

Belgrade won't do anything. Their government has been neutered long ago. I feel real bad for the serbs in Kosovo as they have been abandoned.

But I also understand Serbia is stuck in a very bad position as well. They let their military become delapidated. Only force they can compete against now is Canada....
George1

Apparently he's in hospital there now with severe head and facial injuries. Wonder how that happened

Apparently he's in hospital there now with severe head and facial injuries. Wonder how that happened 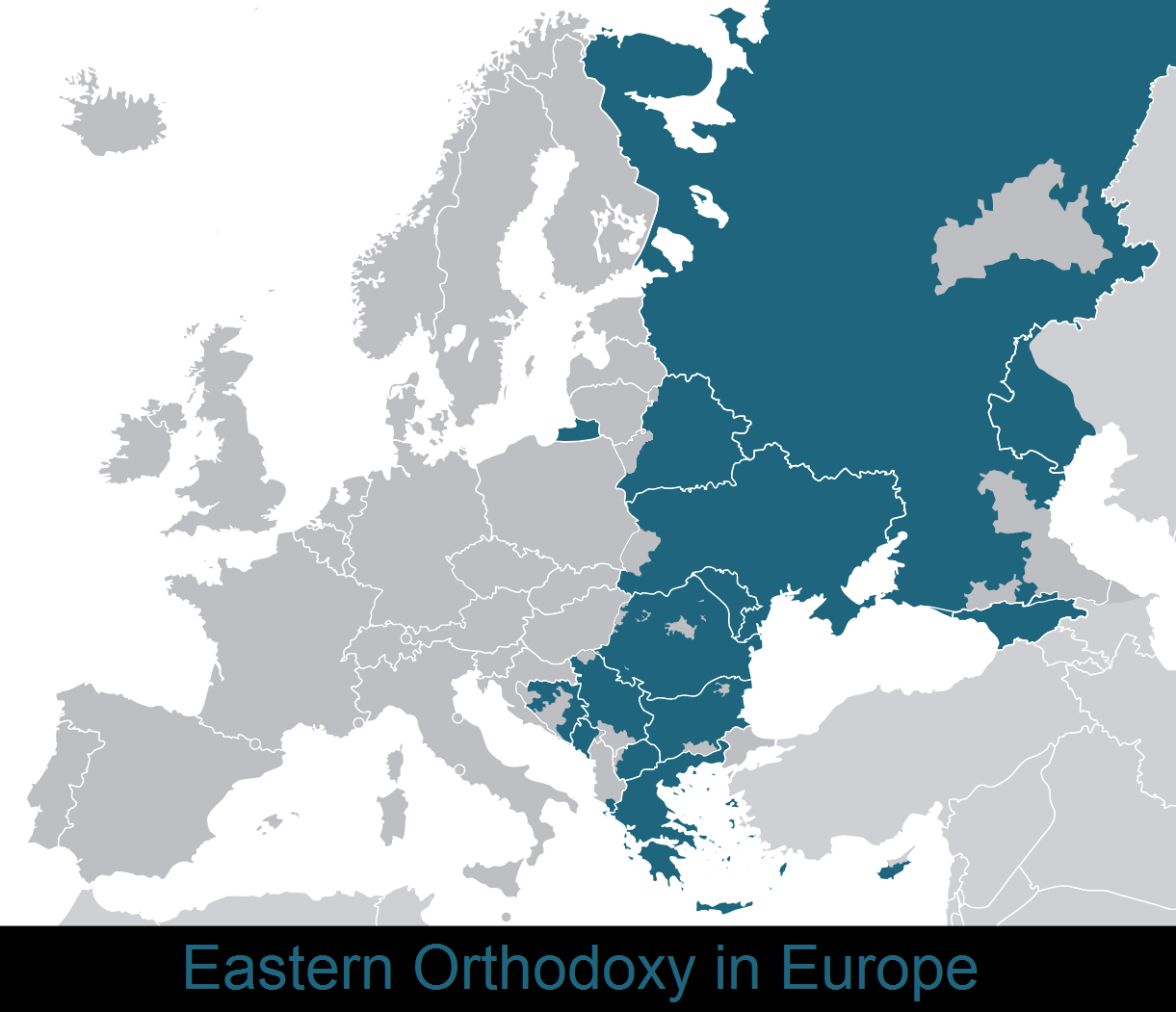 Actually Serbia doesn't have that many non-red areas, those are just multi-confessional parts

Same goes for other countries

Also, Tatarstan is 50-50 so they should have splashed some paint there too
Sponsored content