nastle77 wrote:During the Soviet period did the marines have any swift boats?  Small boats that are fast And equipped with machine guns rocket launchers that can be used as interceptors in brown waters?

Currently we have Project 1400M in the Northern Fleet and Project 1204 in the Caspian flotilla, the 1204 being better armed and more what you're looking for.

Well the zhuk class and p4 class boats of postwar soviet era also fulfill this role right ?
Did the Soviets still have komar class boats till the end of the cold war?

Uhmm...the Zhuk-class is Project-1400M and the P4-class is a Chinese torpedo boat, your looking for the Soviet Shershen or Turya-class torpedo boats.
No, all my sources say the same thing, they were all retired in the 80s, so when the cold war ended in the 90s there probly weren't any in service, and before that they were probly in reserves considering how popular the Osa-class was.

Another Russian Marines video for George;

Νice! Thanks franco, i hope that russian marines also will take more modern hardware in the future
eehnie

Νice! Thanks franco, i hope that russian marines also will take more modern hardware in the future

I think the BMD-4M platform opens very interesting options for them. In fact I think Naval Infantry and Airborne Troops can share most of their equipment, if not all.
AlfaT8

Νice! Thanks franco, i hope that russian marines also will take more modern hardware in the future

I think the BMD-4M platform opens very interesting options for them. In fact I think Naval Infantry and Airborne Troops can share most of their equipment, if not all.

Yea, i seem to recall the air-born and the navy basically being at each others throats when the air-born was trying to get more BMD-4Ms, but for some reason the Navy kept arguing against it, i recall that thing got so outta hand that the president himself had to intervene to resolve that situation.
GarryB

There was a lot of cooperation between the VDV and naval infantry in the Georgian conflict and they continued training together since then.

I seem to remember the naval infantry wanting an amphibious version of the Kurganets, rather than a lighter vehicle (ie Tigr/Typhoon/Boomerang).

GarryB wrote:There was a lot of cooperation between the VDV and naval infantry in the Georgian conflict and they continued training together since then.

I seem to remember the naval infantry wanting an amphibious version of the Kurganets, rather than a lighter vehicle (ie Tigr/Typhoon/Boomerang).

They have something of a rivalry with each other though. Both being these sorta meathead infantry dudes that think they're the ultimate badasses.
T-47

GarryB wrote:
I seem to remember the naval infantry wanting an amphibious version of the Kurganets, rather than a lighter vehicle (ie Tigr/Typhoon/Boomerang).

Yeah they need some armor which can swim!
eehnie

We would have to see it in rough ocean water first.
GarryB

Those landing vessels in the Mistral seemed to be ideal for delivering armour from an offshore Mistral to a beach super fast... a much better option in my opinion than having armour move at 6-12 knots in open ocean for half an hour or more...
George1

Exercises of the Northern Fleet in Taimyr (Dudinka) 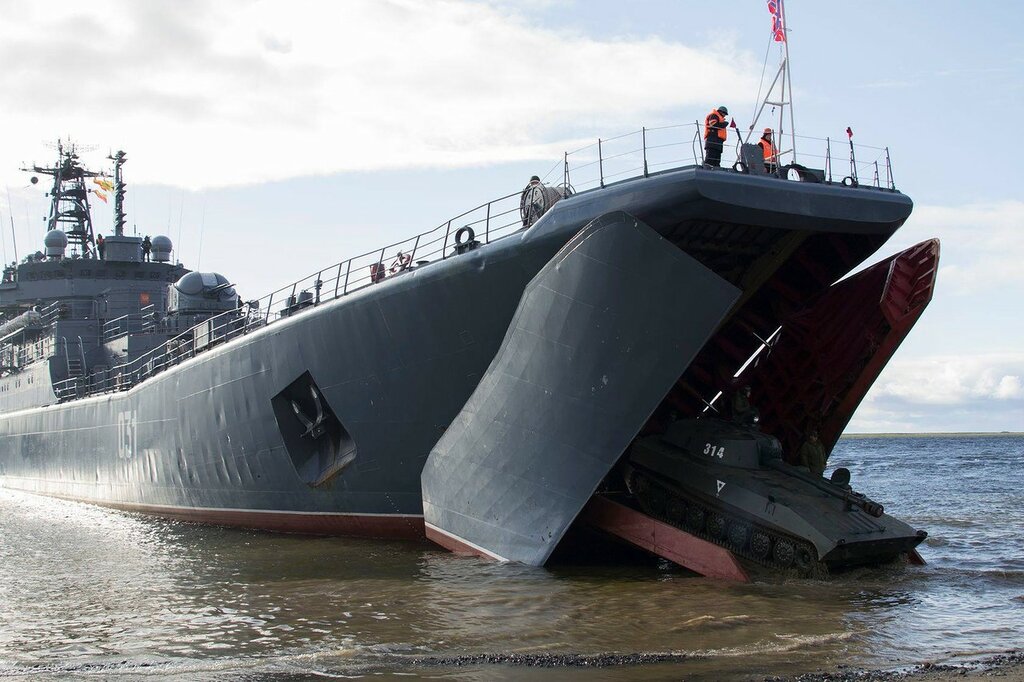 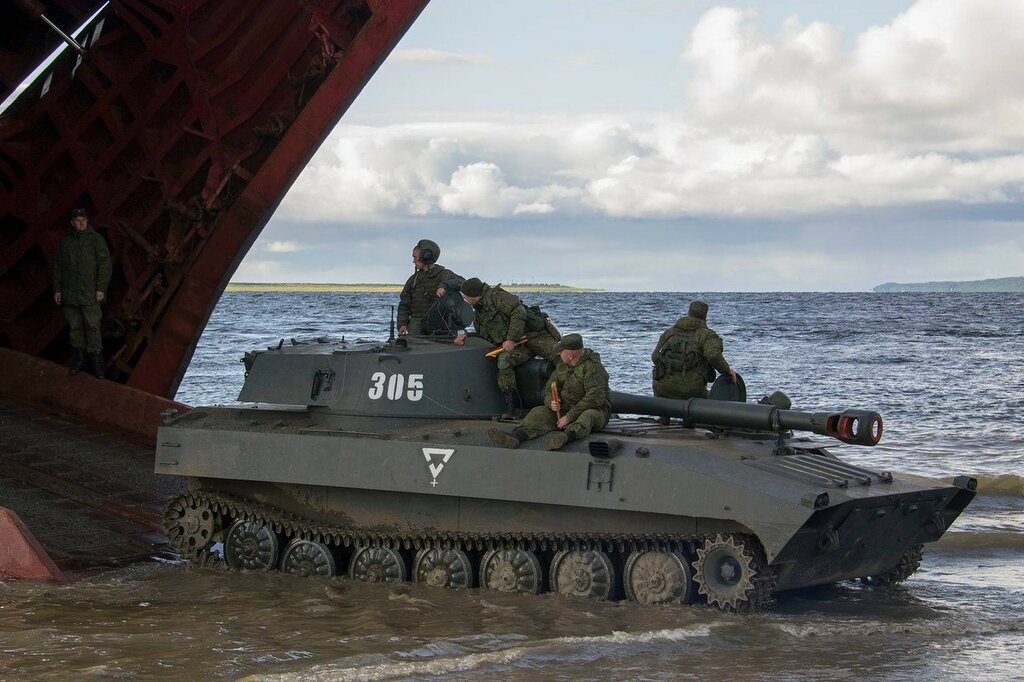 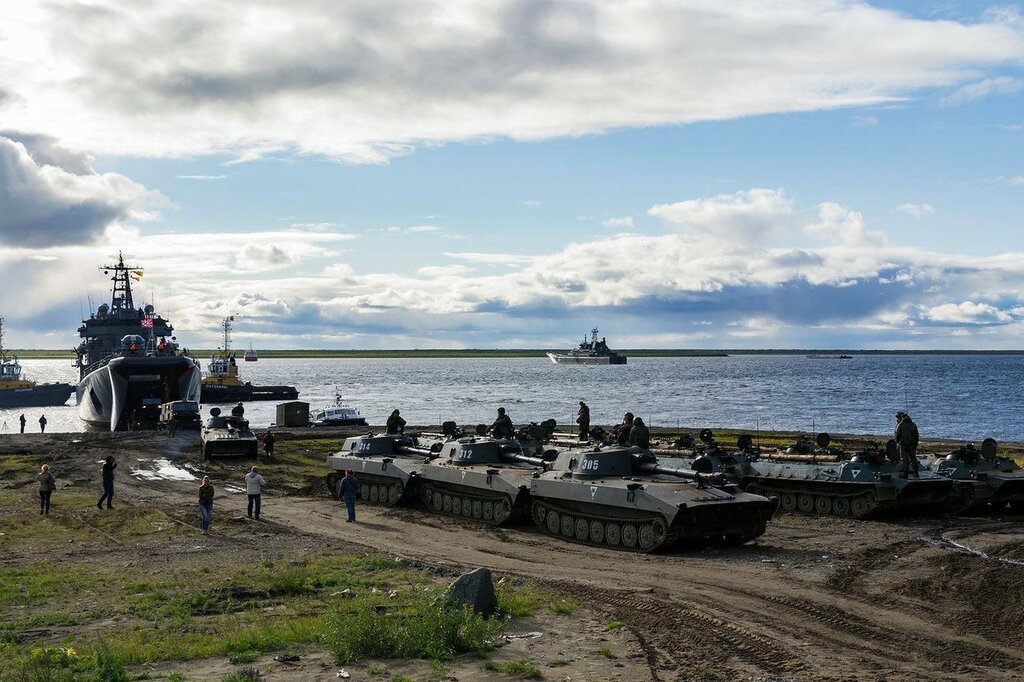 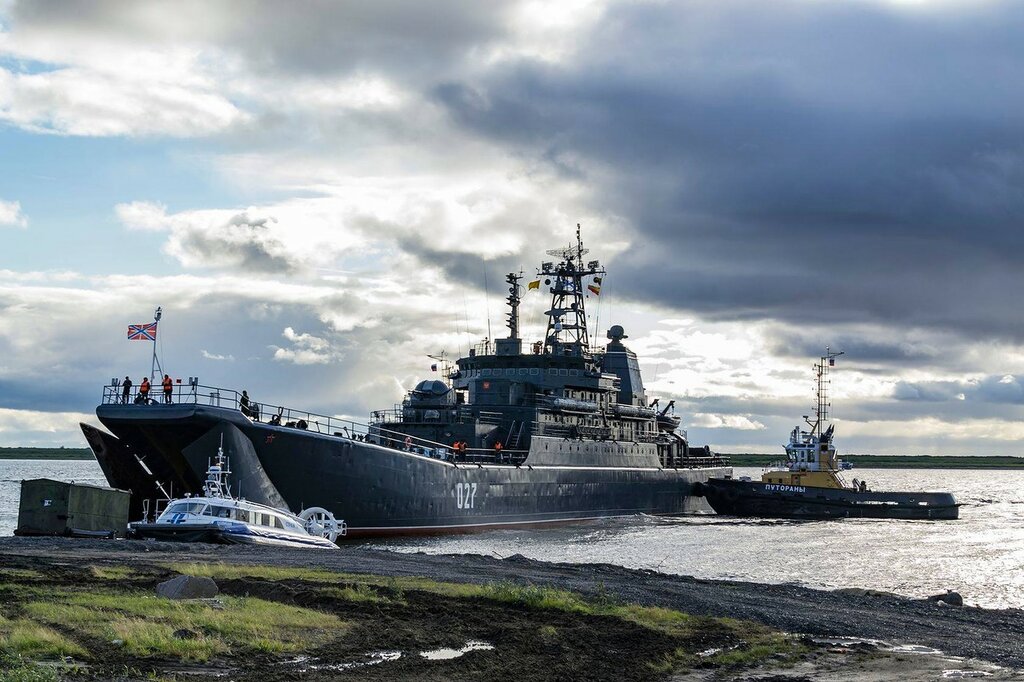 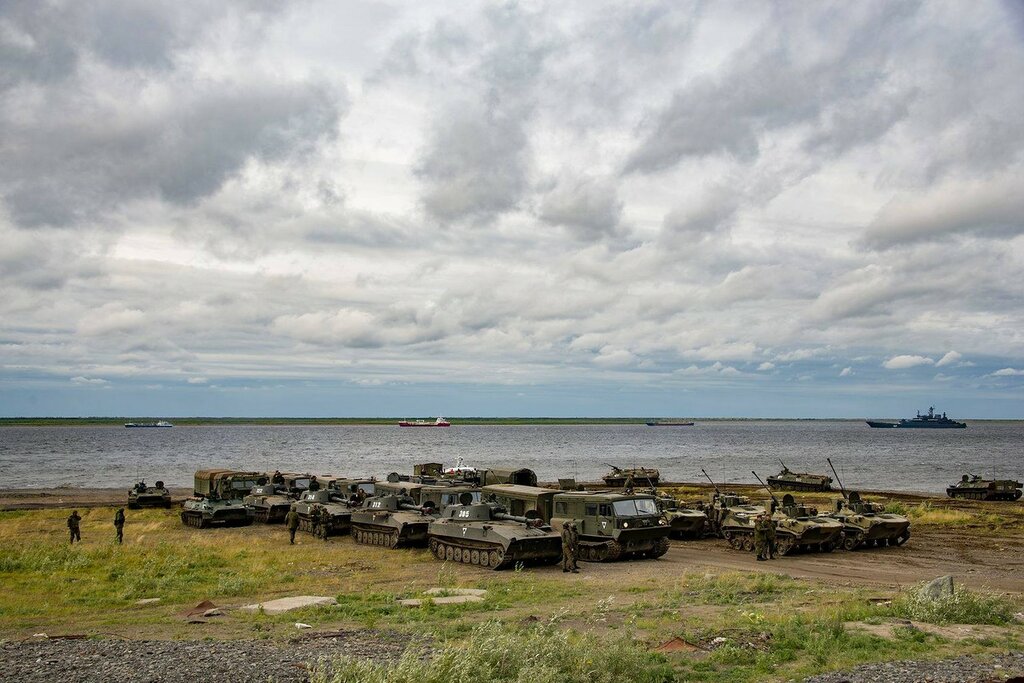 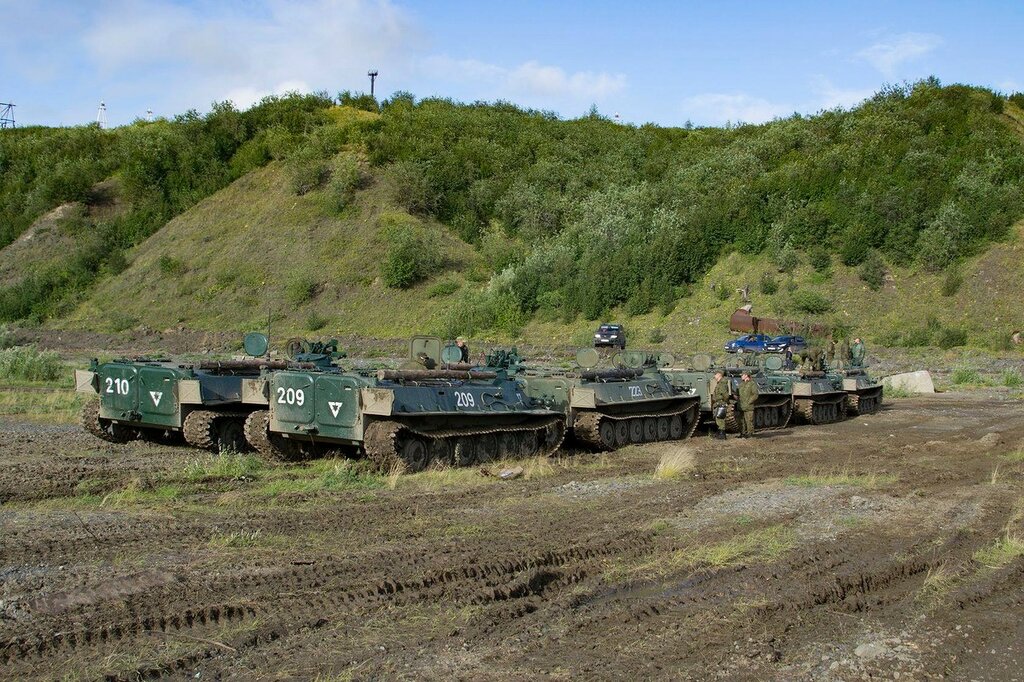 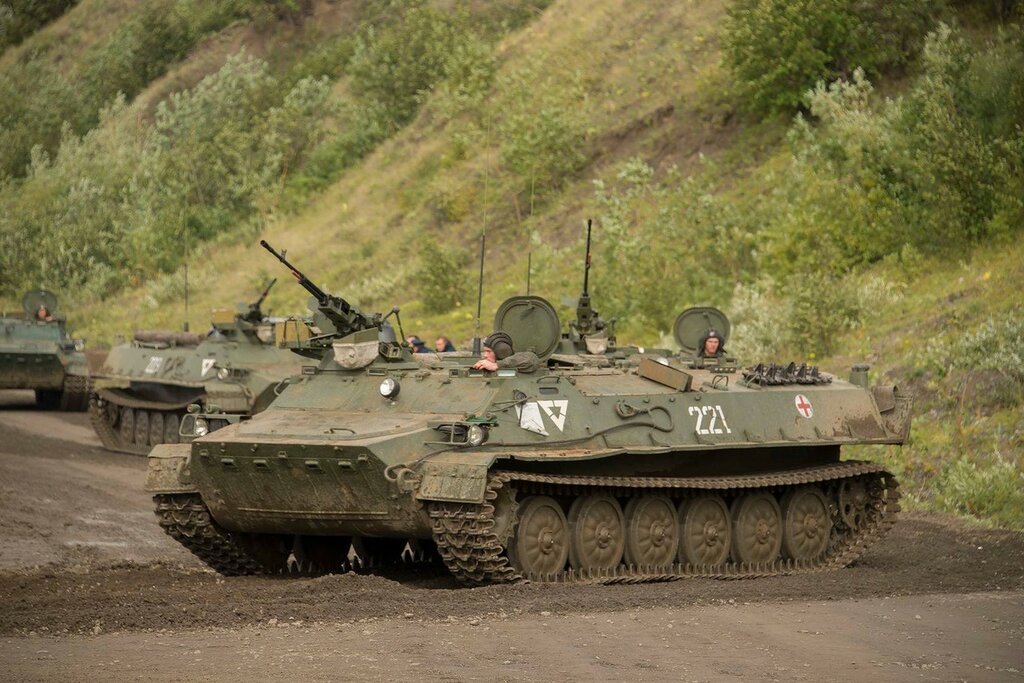 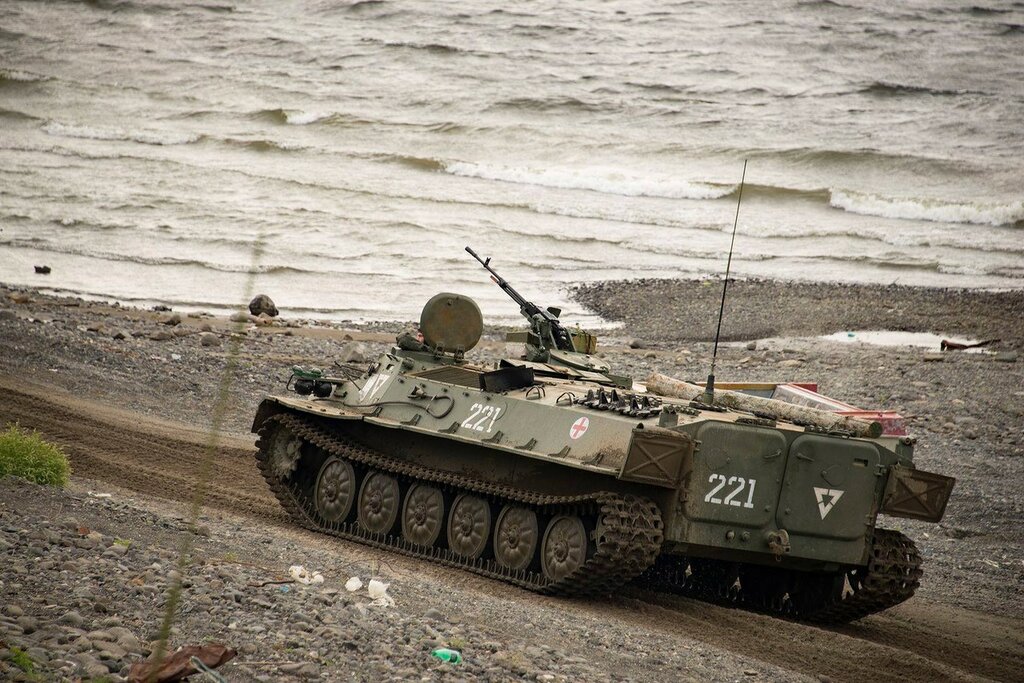 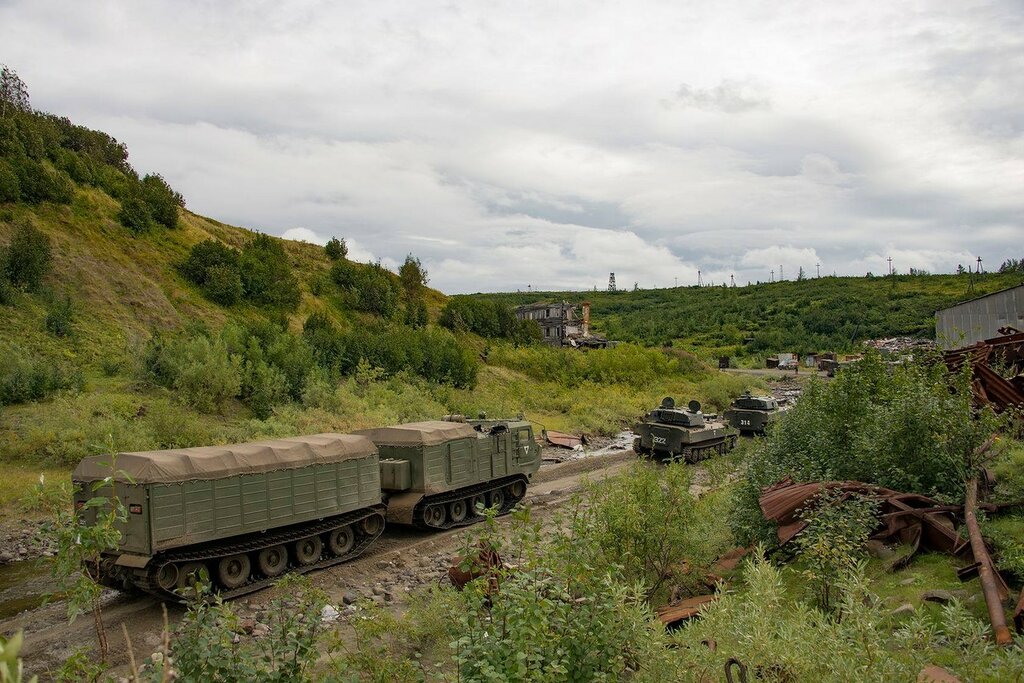 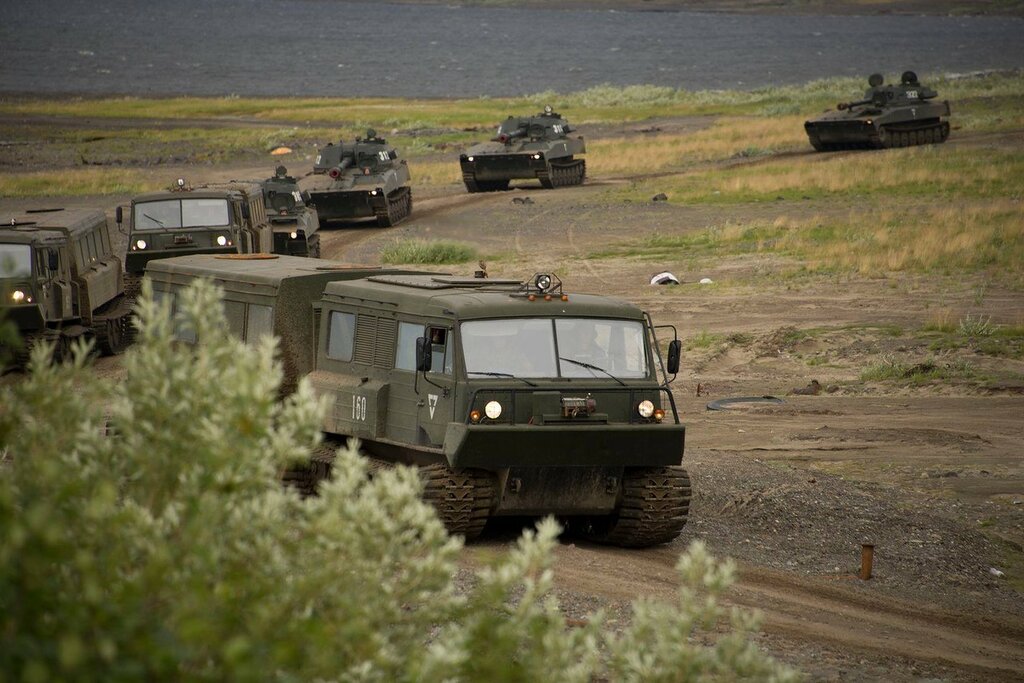 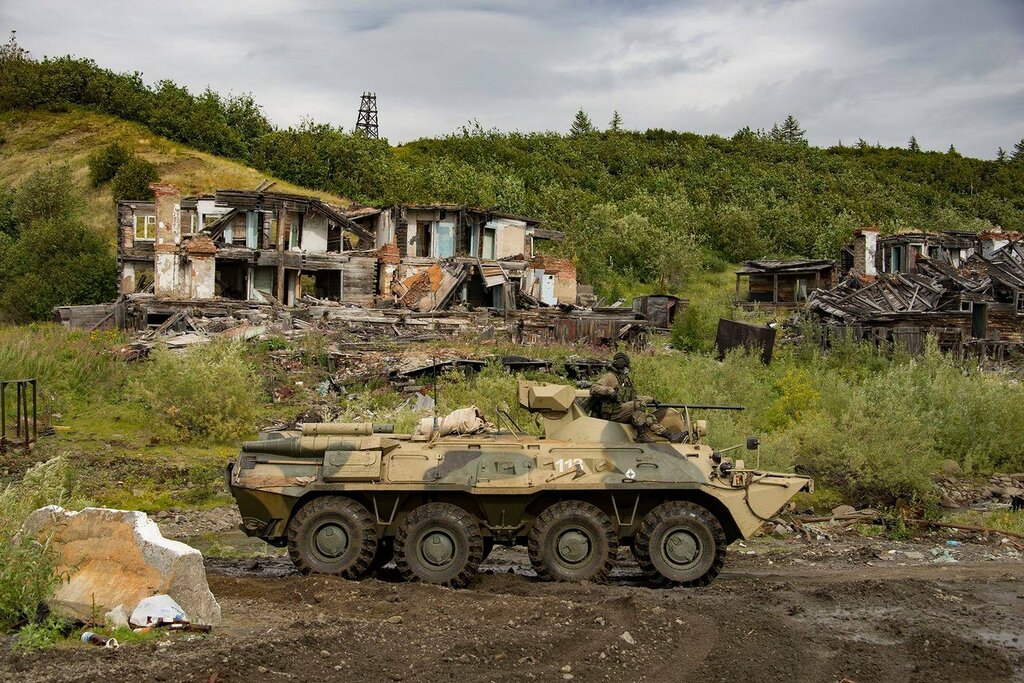 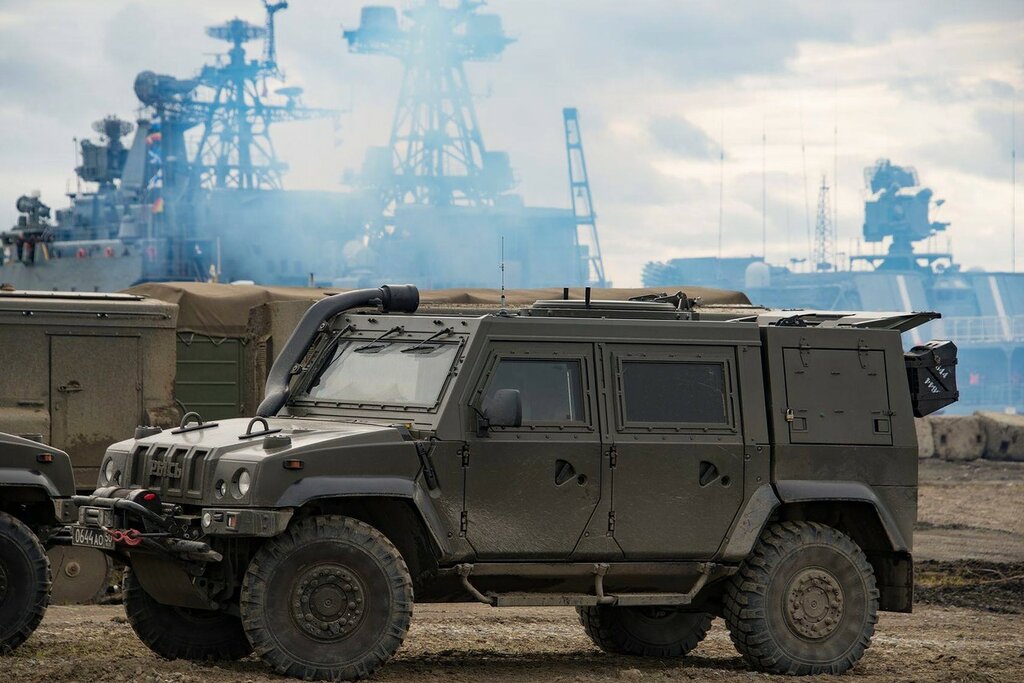 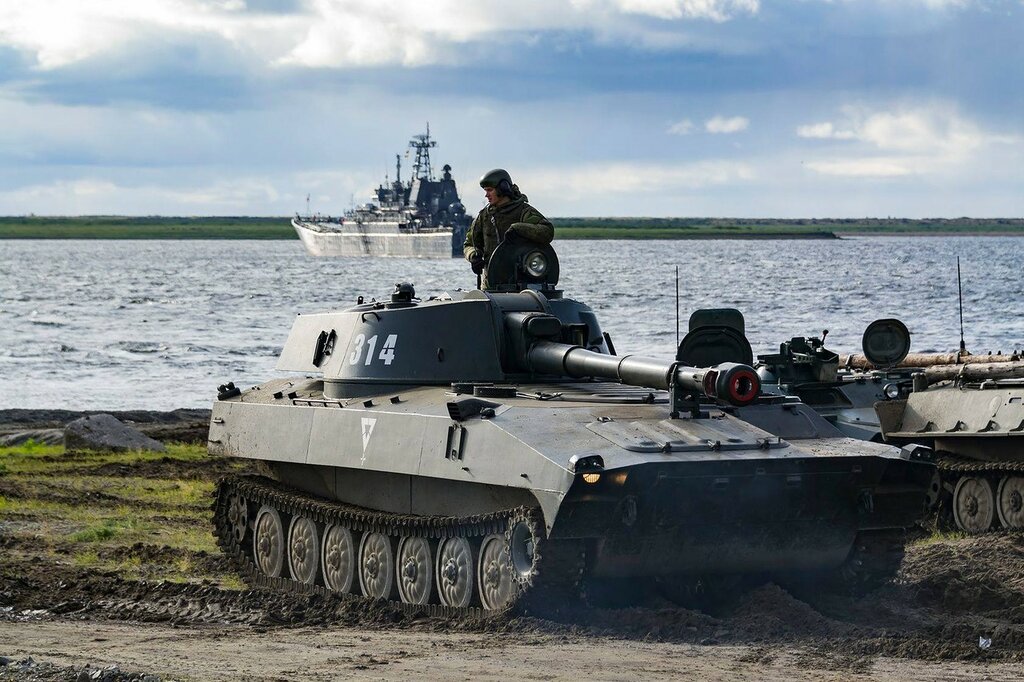 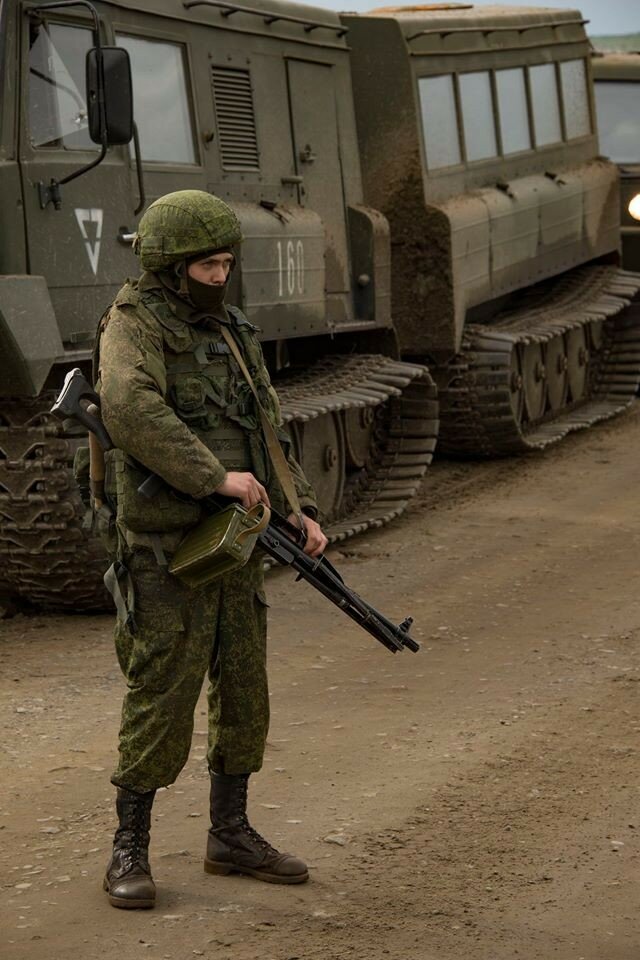 The unique Russian armored carrier "Boomerang" can independently swim tens of kilometers and accurately hit any targets from the surface of the water. Also, the APC can be transferred over long distances with the help of high-speed landing craft and land the military from the ships-transports to the unprepared shore. These requirements are specified in the tactical-technical task of the Navy. According to experts, for the Russian marines "Boomerang" will become a universal combat platform, capable of solving a wide range of tasks. Landing troops from the sea, supporting it with fire, and also fighting on land.

The Bumerang BTR was developed and tested by the Military Industrial Company (OOO VPK). The car was first shown to the general public at the exhibition-forum "Army-2017". Earlier, "Boomerang" could only be seen from afar during the Victory Parades on Red Square.

As Izvestia was told in the Navy's commander-in-chief, tactical and technical requirements for the Bumerang BTR intended for the marines have now been formed. The machine should be able not only to independently force small water obstacles, but also participate in the over-landing landing (more than 60 km from the coast - "Izvestia") of the sea assault. To do this, high-speed hovercraft will be used. In both cases, "Boomerang" should be able to fire from all types of weapons of the armament complex for coastal purposes.

"The floating version of the Bumerang BTR is being tested," said Alexander Krasovitsky, General Director of the MIC, answering the questions of Izvestiya journalists at the 2017 Army Forum. - The shape of the car is still being finalized according to the customer's requirements, so it's too early to speak about its capabilities in more detail.

At present, the Marine Corps units of the Navy are rearmed on BTR-82A armored personnel carriers and 120-millimeter self-propelled artillery pieces 2C31 "Vienna".

"The plans for the development of the Navy include the construction of a series of new large amphibious assault ships of the" Lavina "type," Professor of the Academy of Military Sciences Vadim Kozyulin told Izvestia. "These ships will be able to deliver up to 60 light armored vehicles to the shore, drop it on the unequipped shore through the forward ramp or transfer it to the land by speedboats. As part of this work, the sailors ordered their own development of a prospective combat vehicle in place of classic armored personnel carriers, but because of the limited funds, the work was not developed. "Boomerang" can be considered a compromise, which will ensure the marines as seaworthiness of the vehicle during the landing from the water, and increased firepower.

Today, "Boomerang" - one of the most versatile combat platforms, created by a modular type. BTR received the front engine layout. This arrangement protects the crew and troops from the bullets and grenades of the enemy, and also provides a more convenient exit from the car through the aft ramp. The machine has amphibian capabilities thanks to a sealed displacement armored hull and two water cannons located in the stern of the armored personnel carrier behind the wheels of the machine. They provide the mobility of a 20-ton "Boomerang" on the water with a maximum speed of at least 12 km / h.

Unlike the BTR-82A, the Boomerang can be equipped with various unmanned combat modules with weapons of caliber from 12.7 mm to 125 mm. In a number of configurations, an anti-tank missile system is included in the armament complex. This significantly distinguishes it from its predecessors and allows it to offer a platform to virtually any of the Russian law enforcement agencies, be it the Land Forces, the National Guard or the Navy's Marine Corps. On the basis of the unified armored platform "Boomerang", an armored personnel carrier K-16 and a wheeled infantry fighting vehicle K-17 have already been developed. Completion of tests of the basic version of the Bumerang APC is expected this year.
eehnie

Then it seems the Naval Infantry will go to the Bumerang platform. 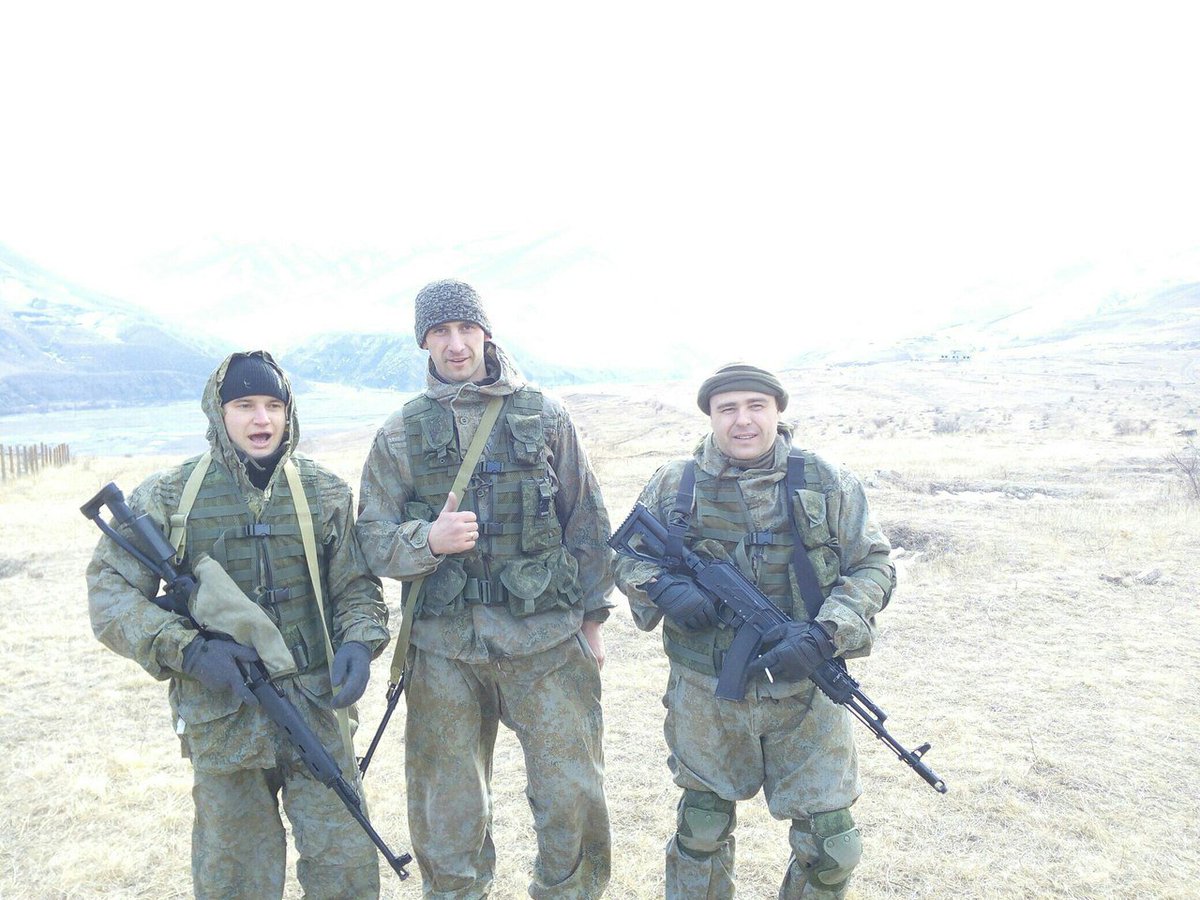 2nd WW Soviet anti-tank PTRS-41 rifle in the hands a Russian Naval Infantryman.Seems like shipping container interior, so Tartus is a poss 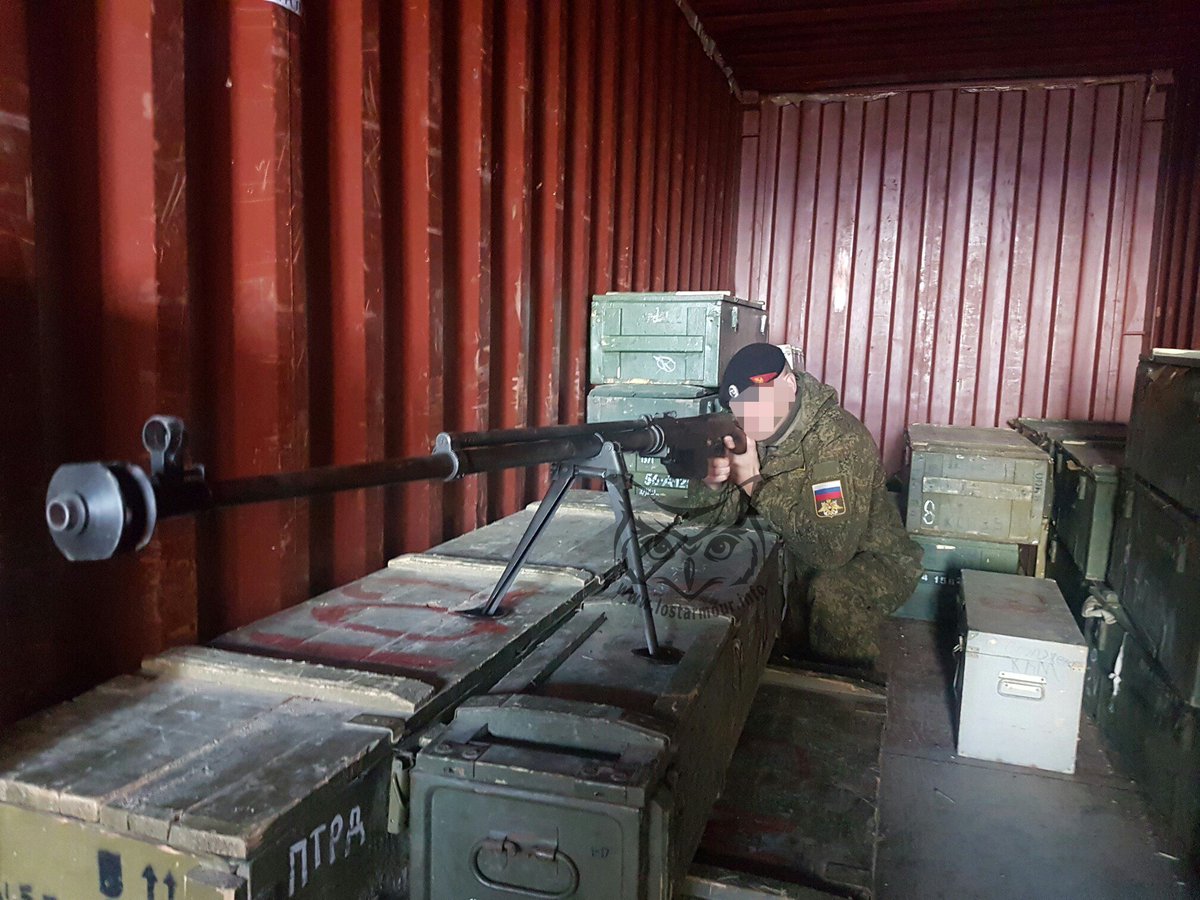 I'm stuck with an old ORBAT with regards to russian naval infantry.

Typical infantry battalion should have around 409 men with 34 tracked vehicles, a tank company 13 MBT ( 1 company's commander, 3x4 MBTs platoons), an antitank battery should have 6 BRDM, an AA battery 4 Shilkas (or Pantsirs) and 4 SA-9s, an engineer company 3 K-61, a recognition company 3 PT-76 and 9 BDRM.

Is it still the same, new equipment apart?
franco

I'm stuck with an old ORBAT with regards to russian naval infantry.

Typical infantry battalion should have around 409 men with 34 tracked vehicles, a tank company 13 MBT ( 1 company's commander, 3x4 MBTs platoons), an antitank battery should have 6 BRDM, an AA battery 4 Shilkas (or Pantsirs) and 4 SA-9s, an engineer company 3 K-61, a recognition company 3 PT-76 and 9 BDRM.

Is it still the same, new equipment apart?

Landing in the Russian-Indian exercise "Indra-2017" 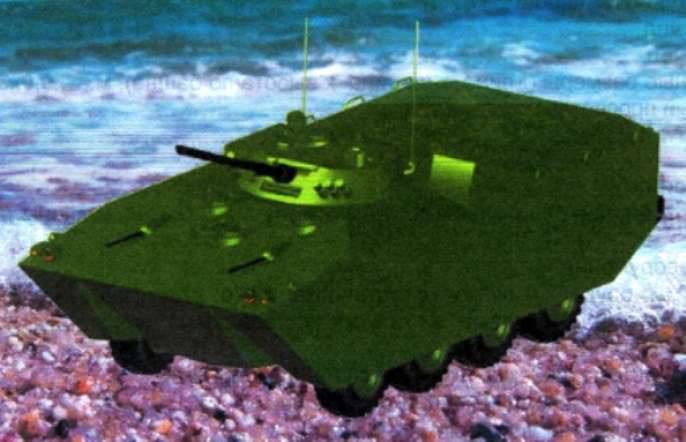 Promising wheeled combat vehicle of the Naval Infantry, created under the code "Platform BMMP", will surpass a similar purpose Chinese VN18 , about which so much has been said lately.

It's planned that the Russian amphibian will receive a gas turbine engine with a capacity of 1250 HP, which is already well established on tanks T-80U. As a result, at a weight of 30,7 t be able to reach a maximum speed of about 60 km/h on land. When driving on the water at sea state 2 and wave of height of 75 cm, it will gain the ability to move with a speed of 37 km/h.

Machine will have water-jet propulsion and a special convertible body to reduce hydrodynamic resistance.

The fighting compartment of the BMMP similar to a BMP-3. Armament: 100-mm gun - launcher 2A70, she is able to apply not only common shells but also launch guided long-range missiles. With her snap a small-caliber automatic 30-mm gun 2A72 and 7,62 mm Plus two machine guns of 7.62 mm in front of the body.

BMMP will have the opportunity to leave the landing ships at a distance of 40-60 km from the shore at maximum speed to go to the districts drop-off. 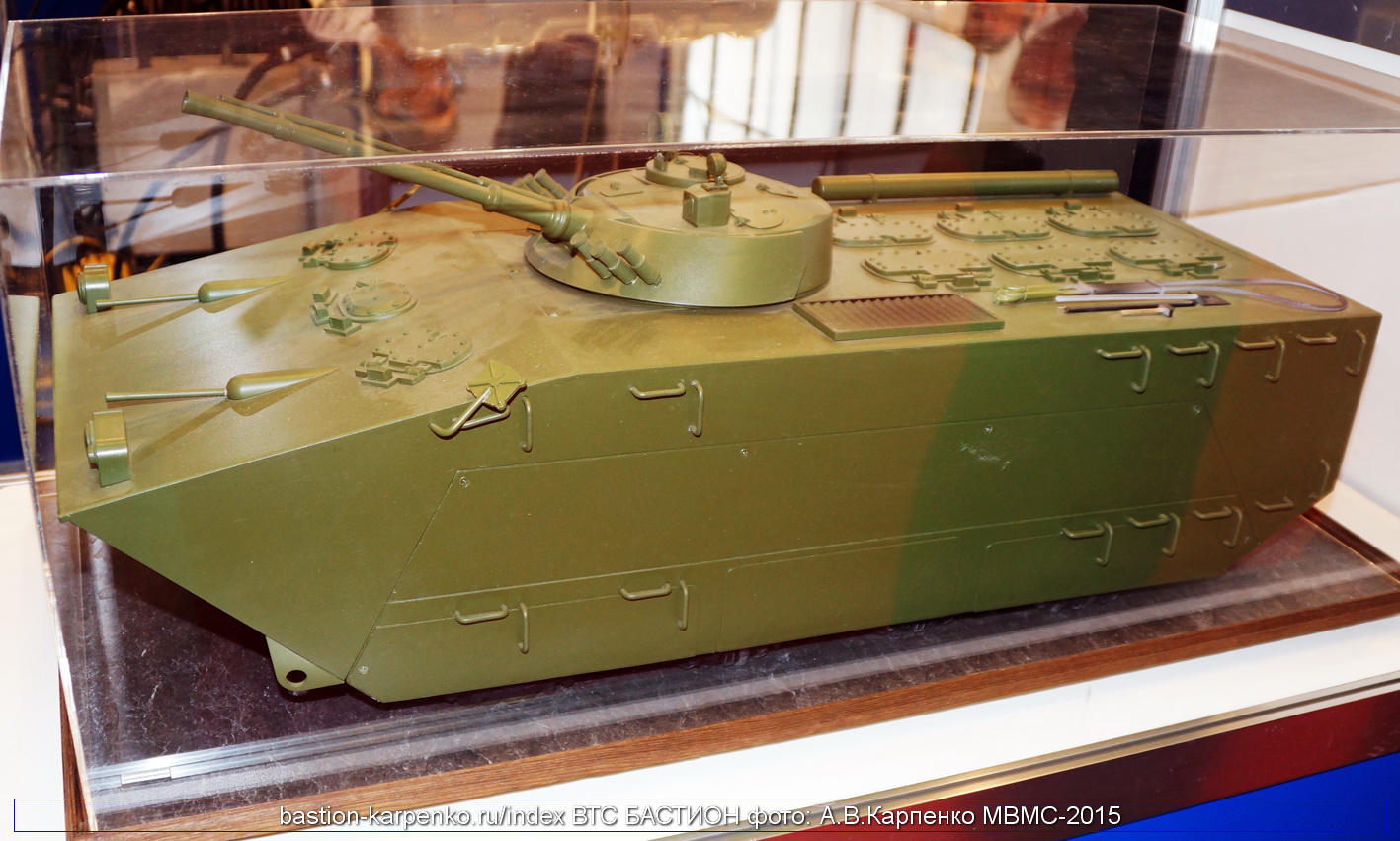 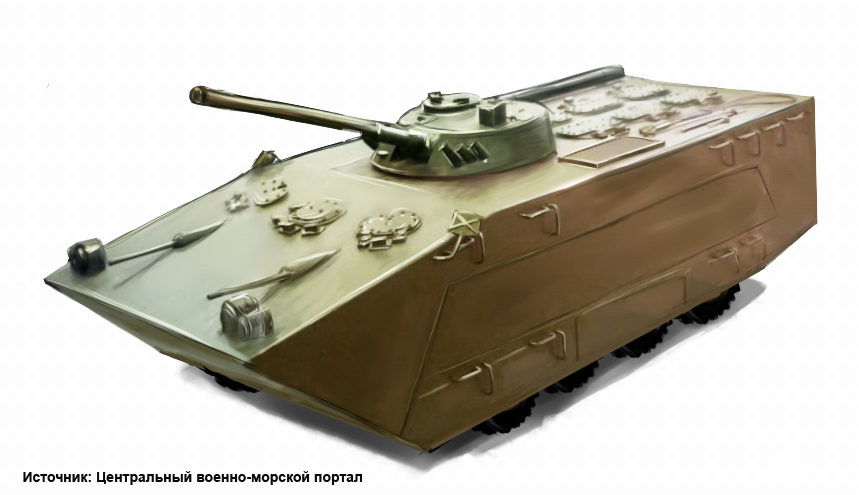 The counter-sabotage boat of the project "Grachonok" of the Kola flotilla of the various forces of the Northern Fleet will be named after Valery Fedyanin. The head of the press service of the Northern Fleet, Captain 1 rank Vadim Serga, informed the "RG". The commander of the brigade of the marine infantry, Colonel Valery Fedyanin, was killed while performing a humanitarian mission in the Syrian Arab Republic.

The bronze bust of Colonel Fedyanin will be installed in the memorial complex to the dead marine infantrymen on the brigade's territory.

Commander of the Federation Council Vice Admiral Nikolai Evmenov congratulated the military on the Day of Marine Corps on Monday.

- In 2017, the Marines successfully completed the missions of long-range marches on ships and vessels of the fleet, including on board the heavy aircraft carrier "Admiral of the Fleet of the Soviet Union Kuznetsov" during a campaign in the Mediterranean Sea. More than 10 groups of anti-terrorist activities, which consisted of soldiers of the Marine Corps, ensured the safety of ships of the auxiliary fleet in the seas and oceans, - said the admiral.

Marines of the Northern Fleet for the first time engaged in mountain training at a new training ground, created by own forces near the distribution of the brigade in the Murmansk region.
George1

Russian Ministry of Defence published this image gallery of 61st Separate Naval Infantry Brigade (OBrMP) unit.This seems to be one of the more elite units within the 61st OBrMP structure.Note the AM-1 ATV driver who is armed w/ ASM (6P30M) w/ a 30-rd mag. 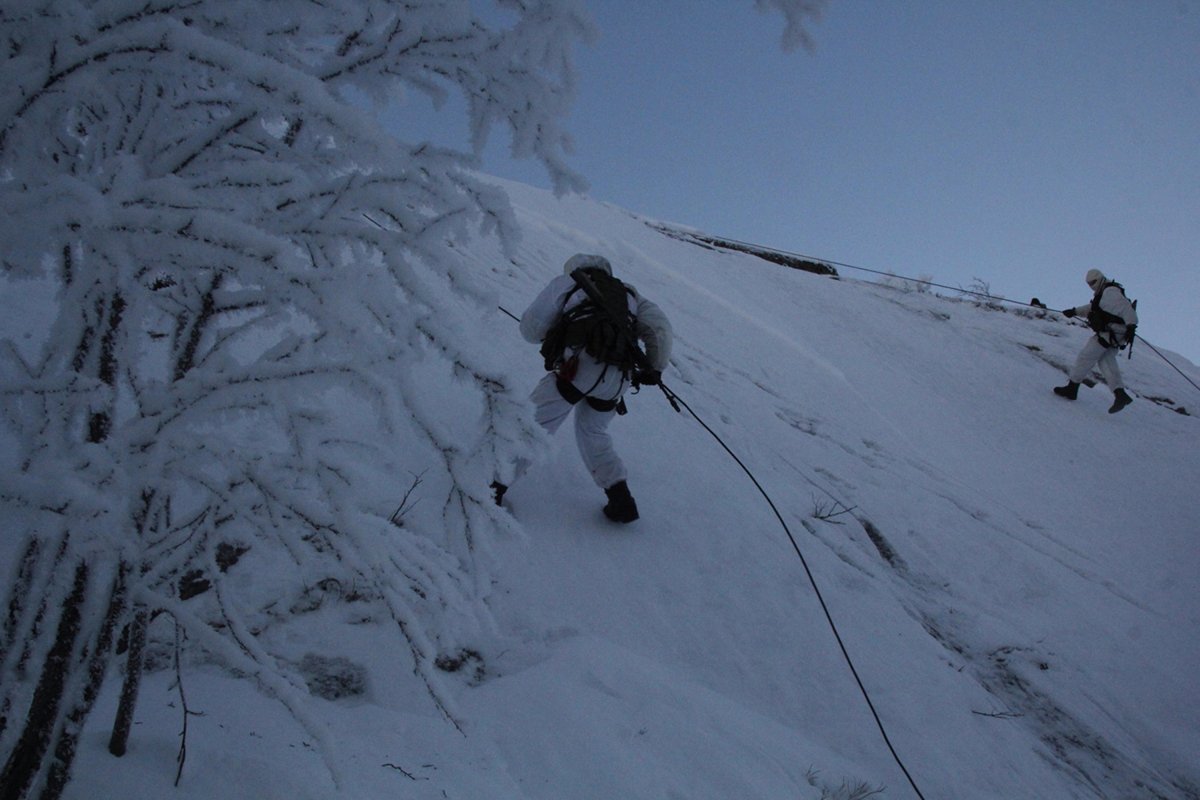 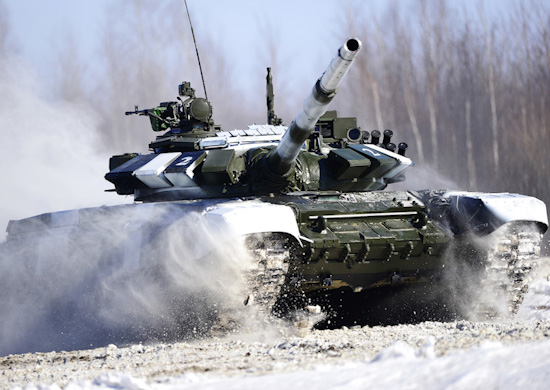 In accordance with the Rearmament Plan of the Pacific Fleet Costal Troops, a formation of the Marines has received new T-80BV tanks.

The crews have undergone the necessary theoretical and practical training and start to operate the new hardware at testing grounds.

Today, in course of a field training, the Marines brigade held driving and live-fire exercises for the new vehicles at the Radygino training ground.