Spetnaz means special purpose... all branches of the military and militia have their own Spetznaz. It has different purposes depending on the service. The navy does have its own Spetznaz... Marines are not Spetznaz.
ekacipta021292

So, I suppose that the marines have their own spetsnaz. Is that true?
Robert.V

The KGB also had a naval spetsnaz ...well kind. Back in the day Alfa and Vymple had naval unit's trained by instructors from GRU's Navel sabotage unit's.

The naval spetsnaz and marines are like the VDV and spetsnaz.

The term spetsnaz is a generic term that simply means special purpose troops.

Even the construction forces have special purpose troops.

What we in the west call Spetsnaz are GRU Spetsnaz.

Naval Spetsnaz are not so well known in the west but they are separate from the Soviet Naval Infantry or Marines.

If you see a guy with rebreather gear (ie no bubbles) and an underwater rifle or pistol then they are probably Naval Spetsnaz.

Would you agree Vlad?

(I sometimes find it confusing myself... there are all sorts of spetsnaz, some of which are MVD or FSB like Alpha group and Vympel and others, it gets very confusing... 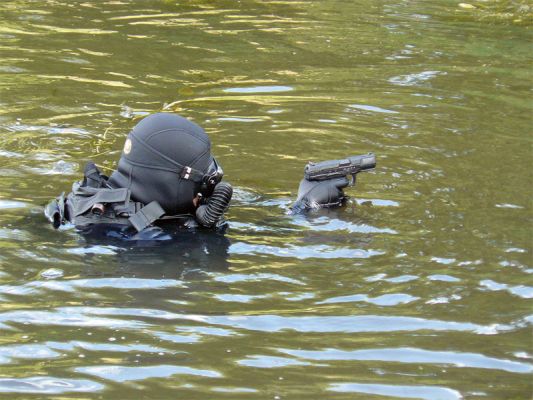 Being in Singapore, with all sort of 'western-oriented' sources and combined them with the Russian sources make me freaking confused. I think I should be a lot more certain when I move to Vladivostok permanently next year. In Singapore, we tend to equalize the GRU (foreign intelligence) and spetsnaz overall.

"If you see a guy with rebreather gear (ie no bubbles) and an underwater rifle or pistol then they are probably Naval spetsnaz."

I think that Naval spetsnaz is very wide in definition, it could be scout, or reconnaissance team. While in MVD or FSB it is mainly for counter terrorism, and anti-riot units, and have their own names such as Vityaz, 604 TsSN, Saturn, Rosich, Rus', etc.

Is that true? I am novice to Russian military (xaxa)
GarryB

In Singapore, we tend to equalize the GRU (foreign intelligence) and spetsnaz overall.

When you read about spetsnaz in the west it is generally GRU spetsnaz they are referring to.
MVD and KGB/FSB spetsnaz are more counter terrorism units.

To put down riots the MVD interior ministry standard units have similar equipment to the armed forces including tanks and apcs and assault rifles so they really don't needs special troops for riots.

Naval spetsnaz include most divers and other navy personel involved in special missions (like SEALs).


I think that Naval spetsnaz is very wide in definition, it could be scout, or reconnaissance team.

And for those special roles they use special forces...

From riding mini subs into enemy harbours, to recon missions to check beach conditions for a landing, through all sorts of other missions the Navy Spetsnaz are the best kept secret of the Soviet Union.

Like the guys in the front of this boat: 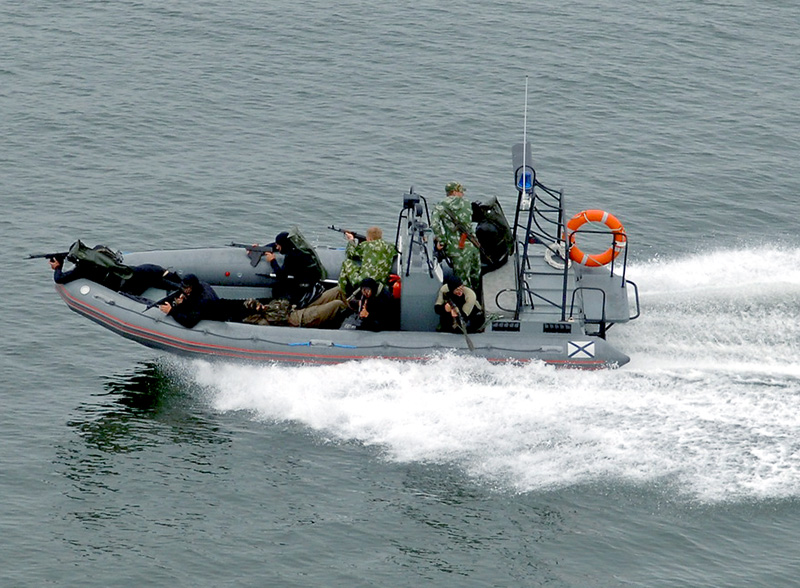 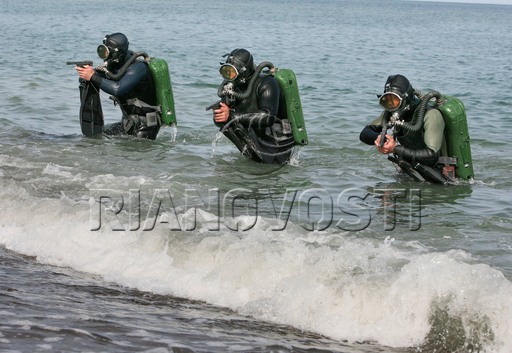 Talking about GRU, I heard that GRU exists in every part of Armed force. So, the Russian VMF also has its own GRU detachment?
GarryB

They are basically intel/recon services, so they operate mainly with the Army.

I would think that the Naval Spetsnaz are part of an organisation that offers the same services for the Navy.

The Airforce has its own intel/recon services I assume.

To be honest I hadn't really thought about it too much so take the above as just my opinion.
Robert.V

I wouldn't be surprised that even a Russian post office has a spetsnaz unit.


and Garry those divers could be OB PDSS or FSB frogmen or MVD frogmen.

of course SVR has thair own frogmen too. Or should have at least ..the kgb had ..besides the Alfa and Vymple who had their own frogmen.
GarryB

It depends on the type of operation of course. For a Naval beach landing it would be Naval Spetsnaz's job to recon the beach and to go in first to help secure it and possibly also spot targets for naval gunfire support or air attack to suppress any resistance to the landing.

Of course it is a bit like SWAT in the US. SWAT means special weapons and tactics, so pretty much any government branch can have SWAT units for "emergency situations".
GarryB 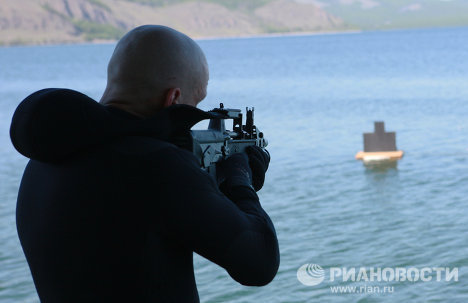 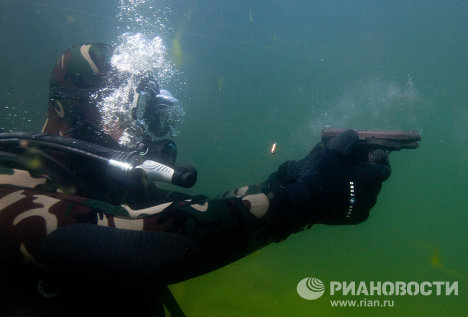 What make them interesting to me is that the top photo is the first photo I have seen of an operational test of the ADS, which is a modified version of the A-91 assault rifle that can use specially designed underwater ammo and normal 5.45mm standard issue ammo from the same weapon. The special underwater ammo is said to be as effective as the specially designed stuff for the odd underwater weapons they used previously, while firing standard ammo with the same or better accuracy as the standard AK.

The other photo shows the GSh-18 pistol that as shown functions normally underwater as it does on land.

The question I would have is how effective are the short fat 9mm projectiles under water... perhaps they have developed new special ammo for them as well?

Here is a better view of the ADS:

Nobody has figured out how to make a monopole magnet yet. Figured that out and you revolutionize Naval warfare/ship propulsion.

Water molecules lining up to a magnetic field is interesting. As you line them up theres a release of energy. Get two glasses of water. Separate them by 1 foot. Take a multimeter and put one electrode in 1 glass of water, and drop the other electrode in the other. Set the multimeter to milliVolts/DC. Take your left hand and use three fingers and gently rub the left glass in one direction, either up or down. Only 1 direction. Faster you go the more voltage differential you see on meter.

How is that possible? GLASS is in an insulator. Separated by 1 foot. Your hand is inducing a magnetic field on the water and the water molecules want to line up. Now take a magnet and do the same thing.

You killed it. No more voltage. Not even if you try using your hand next. Why? Your magnet had a North Pole and South Pole which disrupted the water. Take your left hand and put a finger in glass, take your right and put in other glass at same time..."shorting" the water.

OK....water now ready for programming again to show voltage difference if molecules get lined up again.

Another neat experiment, take a magnet and throw it in a plastic cup with some water and freeze it. After it's frozen dump the icecube out. Notice the ice shows molecules in water lined up to magnetic field with ice arcs?


Only way to "shoot" in water is with magnetic field technology. Master that and you could also fly in the air and then use same craft to fly into water..like UFO.
GarryB

Tell that to Naval Spetsnaz...

Slower bullets like pistol bullets are more effective because of their lower velocity and more solid bullet construction, but the ideal shape for moving through the water efficiently is a long slim shape like a knitting needle... or a torpedo.

The best way to push an object through water is to separate the object from the water... in other words a rocket motor is inefficient at pushing a missile through water, but put a gas generator in the nose of the missile and it is pushing through air instead of water.

Without a nose mounted gas generator ( as used on the 200Knt Shkval torpedo) the next best thing is to use nose tip shape to form an air bubble at the nose for the object to move with... it is called super cavitation.


Only way to "shoot" in water is with magnetic field technology. Master that and you could also fly in the air and then use same craft to fly into water..like UFO.

The APS and SPP-1 have been in operational service for decades.

The new ADS uses a new type of ammo that is externally similar to standard 5.45mm ammo and when using standard ammo the ADS is as accurate as any normal rifle, but with the new ammo it can be used underwater to kill enemy frogmen or dangerous underwater creatures like jellyfish and sharks or dolphins trained by the enemy etc.
GarryB


Forward ejection so you can use it left or right handed without getting hot shell cases in the face with no adjustment needed to change hands.
Fires standard 5.45mm effective to 600m, but also fires special rounds designed to be fired underwater to effective ranges greater than the APS weapon it replaces (with the long needle like ammo).

Replaces two weapons for navy divers... APS for underwater and into and out of water shooting, and the AK-74 for above water shooting at targets not in the water.
GarryB 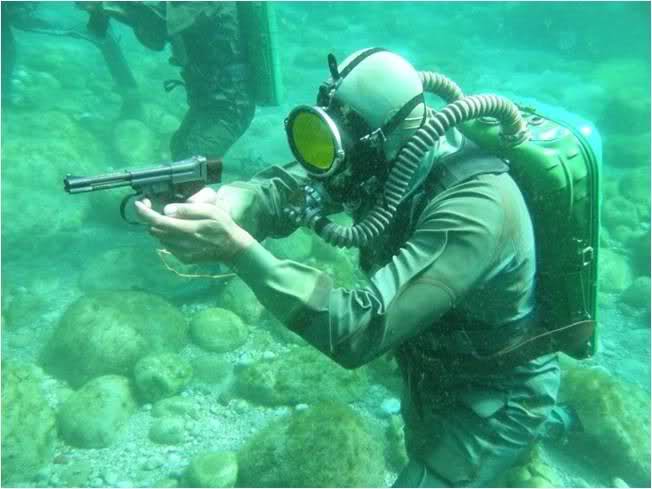 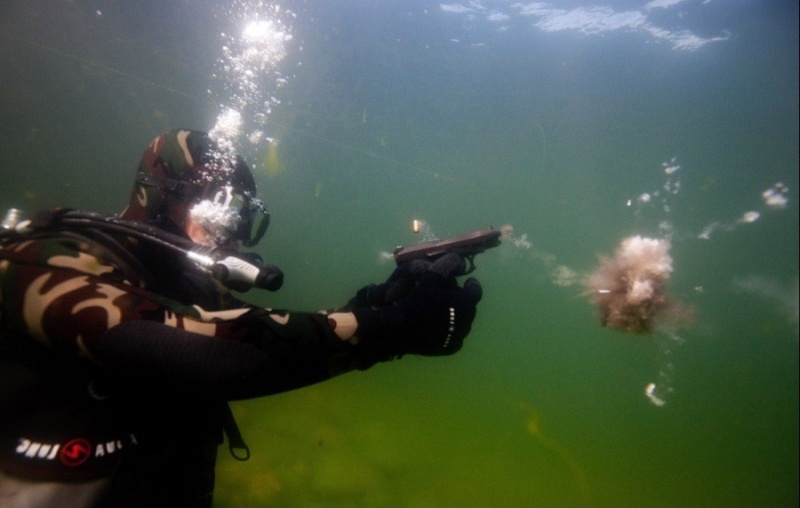 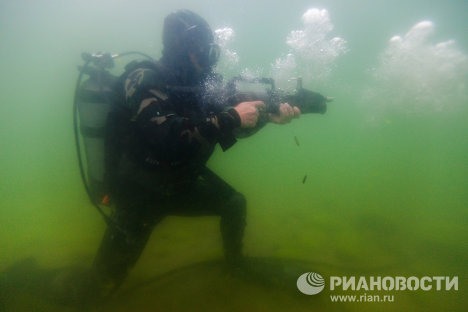 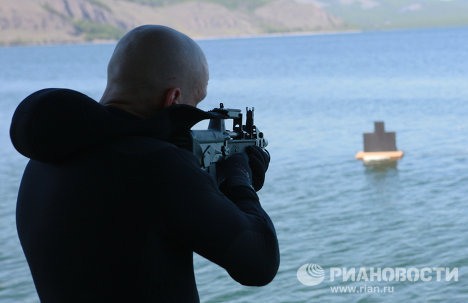 The new ADS above water. 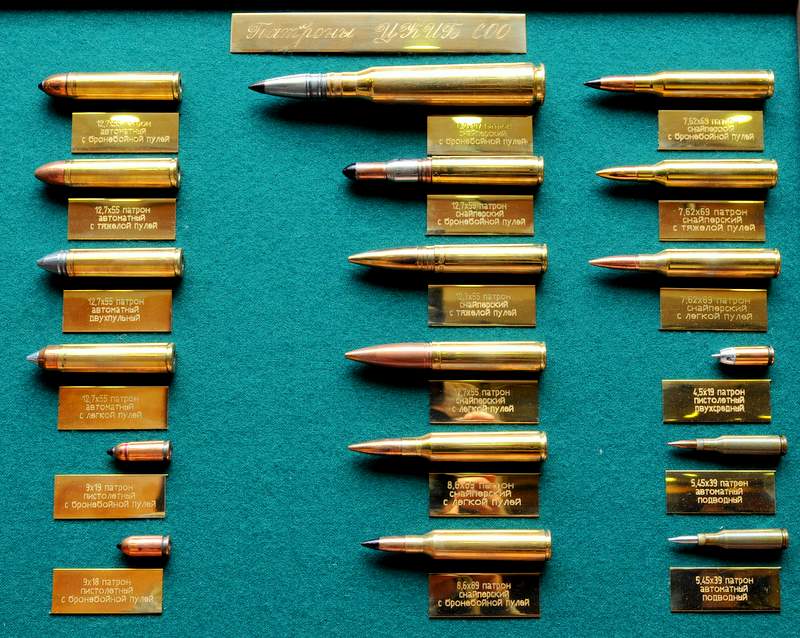 That reminds me... the photo above shows a range of special new ammo the Russians are using or testing.

The bullets relevant to this thread are on the right hand column and are the bottom three cartridges...

They all use sabot designs with small calibre very long projectiles and are all designed to be fired from conventional weapons underwater.

The long narrow design of the projectiles greatly increases their effective range underwater.

This means instead of carrying different weapons for above and below the water you can carry magazines filled with above or under water ammo and simply change mags as you change medium.
Luzhin36

The respirators are currently being tested, the spokesman said. If the tests are successful, they would replace IDA-71 individual breathing apparatuses that have been used by Soviet and Russian navy divers since 1971.

The French rebreathers are lighter and smaller than their Soviet analogues and are equipped with an advanced breathing mixture supply system, the Defense Ministry spokesman said.

Unlike IDAs, which are attached to the diver’s back, the Amphora apparatus’s main unit is fastened to the chest, he said. As a result, Russian navy divers will have to undergo additional training to be able to implement their combat tasks with the new rebreathers, he added.
The Amphora is based on the combat diver Frogs (Full Range Oxygen Gas System) apparatus. It is made up of two components: a 2.1L Oxygen cylinder which provides a dive duration of 240 minutes at 7 meters, and a 2L mixture cylinder to be filled with nitrox, which gives a dive duration of 60 minutes.

Whatever works for them I guess. Usually I don't like to see Russia buying foreign equipment, but if their current rebreathers really are that old then I guess it definitely couldn't hurt.
GarryB

A good idea. It could possibly be like when they purchased some of those French FELIN systems. They could just be studying and evaluating them. Then they'll work to develop their own version.

Do the Russian naval infantry or naval spetsnaz guys or anyone else use ekranoplans, like the A-90?
GarryB

Do the Russian naval infantry or naval spetsnaz guys or anyone else use ekranoplans, like the A-90?

There were plans for using them as troop transports, and as anti ship missile carriers, but work ended a while ago.

More recently there has been some renewed interest but it is early days yet.
Sponsored content