Ukrainians tried to stage anti-Russian provocations during the Georgian invasion of South Ossetia in 2008:


But Putin supposedly claims that "Russians and Ukrainians are same people."

Georgian Losses Reports from the 2008 War:

Sakashvili apparently recently said that "leaving Georgia was the worst thing I did."

I think him leaving Georgia was a good thing.
Odin of Ossetia 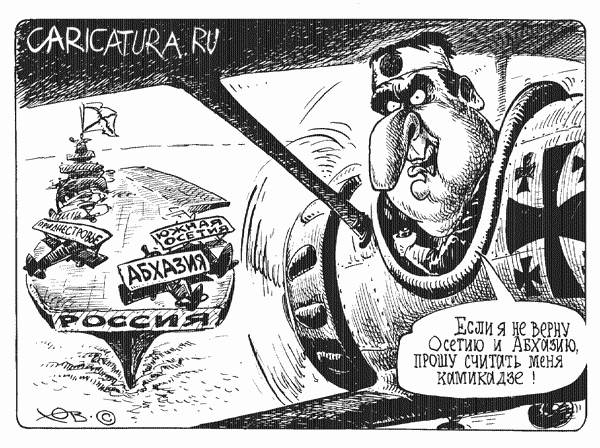 The aircraft carrier is called "Russia." On it are three planes which are named "Abhazia", "Pridniestrovie", and "South Ossetia."


The flying biplane with the big nosed guy as a pilot is Georgia, as it has the Georgian flag painted on it.

The pilot says: "If I do not get back Abhazia and South Ossetia, I will become a kamikadze."

Georgia never had any rights to either. It's time to stop with the BS of imperial borders being legal. They cannot
override historical borders. Imperial borders have been the source of millions of deaths over the last two centuries.
For example, Rwanda and Burundi. Two states concocted by France ignoring the local ethnic distribution. Similarly,
Stalin's carving up of Central Asia, again hacking through real ethnic boundaries. Lenin's Bolsheviks are
what gifted Abkhazia and South Ossetia to Georgia. This is illegal and no amount of time on the maps makes it
legal.
Sponsored content