are these still models with small side doors and clam shell door at the back?
medo

Those Mi-8AMTSh are different than usual ones. They have some device in place of IR jammer behind engines. Maybe this is a heater to warm the cabin and systems inside. I think those helicopters could be for Arctic region and clam shell doors could be behind ramp for better isolation.
Viktor

as requested by a few people. I will keep adding pics so keep checking.

Those are some great pics, thank you!
George1

Here are the new Mi-8AMTSh in the new camo. They don't have the rear ramp for some reason. Were there structural problems with the ramp? And it looks like they have a new APU, and all of them have vibration dampers. 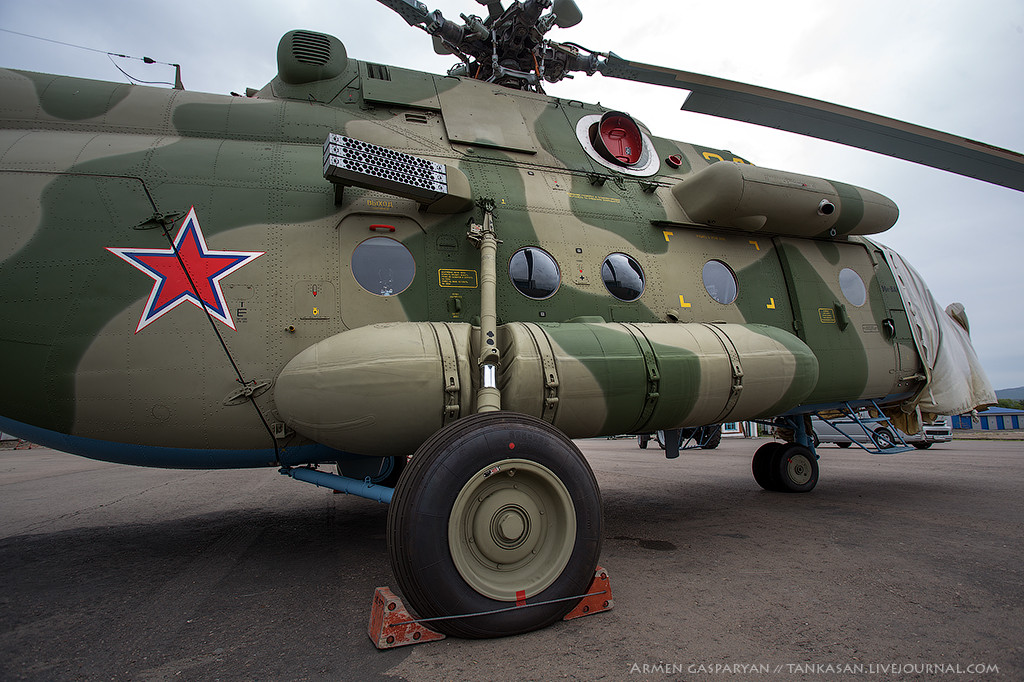 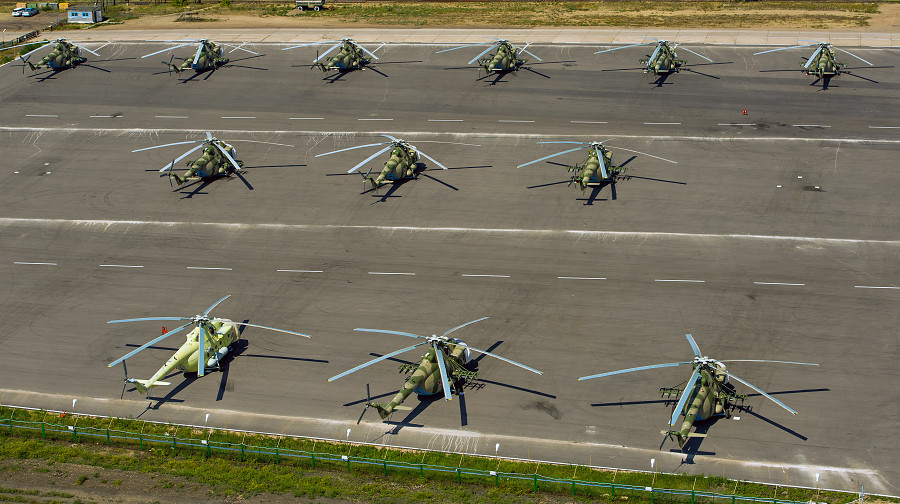 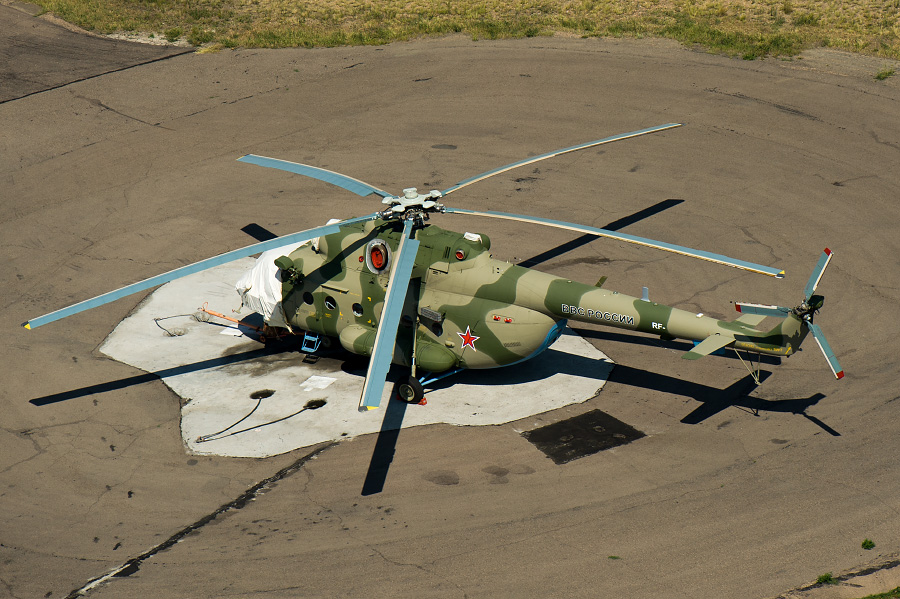 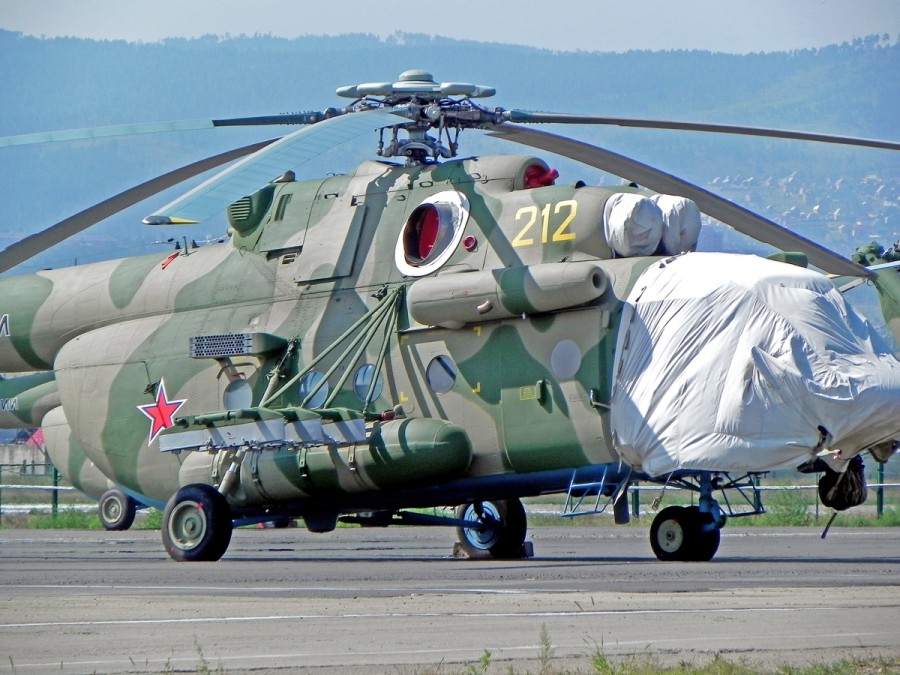 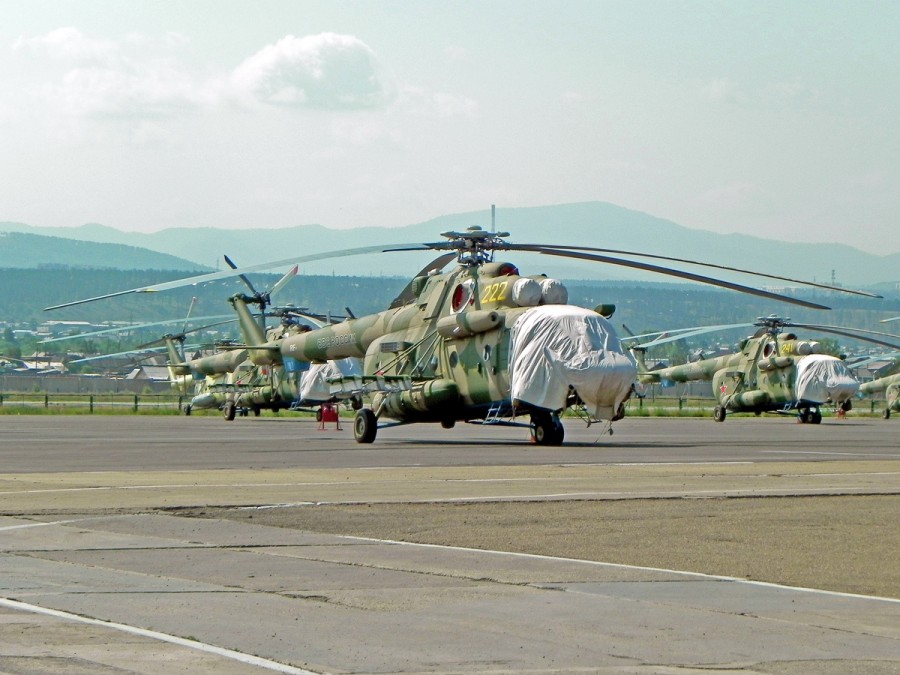 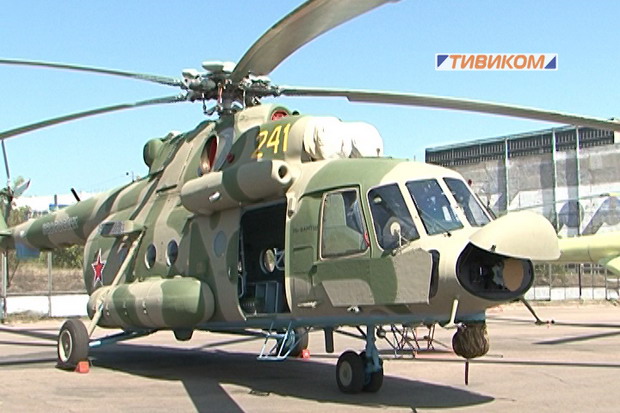 To be honest Mi-8AMTSh don't need a rear ramp, those are Combat helicopters. And the new APU looks like it is necessary from all the new gadgets it have to have enough power to run up all necessary systems.

Would be great to see them with President-S TWCMS.
George1

Russian Helicopters, a subsidiary of Oboronprom, part of State Corporation Rostec, has delivered the first consignment of four upgraded Mi-8AMTSh transport helicopters to Russia’s Defence Ministry. The helicopters were built at Ulan-Ude Aviation Plant (UUAP), a Russian Helicopters company, as part of the state defence order, and have successfully completed the flight to their new duty stations.

A long-term state contract for upgraded Mi-8AMTSh helicopters was signed in Ulan-Ude in August 2013. The improvements to the aircraft – the first of their type in serial production – have been designed to reduce maintenance requirements over the life-cycle of the helicopter.

"The new helicopters will help strengthen our national defence capabilities,” said Russian Helicopters CEO Alexander Mikheev. “Today the Russian Army can call on the latest technologies and equipment. The Defence Ministry is a key customers for Russian Helicopters, and we are committed to producing reliable and failsafe helicopters as one of its priorities under the state defence order.”

“Improving the capabilities of our helicopters is a core priority for us,” said UUAP Managing Director Leonid Belykh. “In conjunction with Moscow Mil Helicopter Plant, which designs Mi-8/17 helicopters, we are able to offer the Russian Defence Ministry the latest helicopters which combine their unique operating experience with the latest technologies.”

The Mi-8AMTSh helicopters delivered to the Defence Ministry are fitted with enhanced VK-2500 engines and an upgraded and strengthened transmission to provide independent control of hours logged in service and improve the aircraft’s operational efficiency in mountainous terrain and hot climates. They also come with new TA-14 auxiliary power plants that generate improved thrust and power output, as well as modern weapons systems. Increased lightweight metal cladding protects the crew and essential support systems, while batteries with enhanced capacities mean electrical systems can function autonomously for longer periods. Thanks to the latest navigational equipment, the helicopter can fly a full range of military missions, including at night with the use of night-vision goggles. The aircraft’s potential capabilities can be significantly expanded by additional equipment for SAR missions and troop drops, and medical equipment to evacuate wounded personnel.

The Mi-8AMTSh has been upgraded with a focus on operational efficiency and ease of maintenance. The new helicopter now has a time between overhaul of 2,000 hours (up from 1,500 previously) and a service life of 35 years (up from 25), while operating costs across the life-cycle of the helicopter have been reduced by about 25%-30% compared to the basic model.

The delivery of the first consignment of upgraded Mi-8AMTSh helicopters marks a new page in the long history of collaboration between Russian Helicopters and Russia’s Armed Forces.
Mike E


AIRFIELD YELIZOVO (Kamchatka territory), September 21. /ITAR-TASS/. Russia’s Air Force helicopter gunships have made a record longest crossing in the history of army aviation at large-scale military exercises codenamed Vostok-2014, the spokesman of the press service and information department of Defence Ministry told reporters on Sunday.
“Sixteen new helicopter gunships Mil Mi-8AMTSh have made a crossing over the sea from the Kuril island of Iturup to airfield Yelizovo. The machines have spent more than six hours in the air, flying more than 1,300 kilometres over the sea,” the officer said. In his words, such an unprecedented crossing became possible thanks to several more fuel tanks installed on helicopters, allowing for such a long non-stop flight.”
These helicopter gunships based in the Eastern Military District have made a crossing especially for drills Vostok-2014, senior inspector-pilot of the flight safety service of the aviation directorate of the 3rd Command of Air Force and Air Defence Forces Colonel Sergei Dyagilev said. He noted that pilots from the Eastern Military District would ‘test’ these helicopters and if this new model is successful, helicopters Mi-8AMTSh can be equipped with additional fuel tanks which can be removed and installed again if necessary in the future.
Viktor

Excellent and should I say finally

The fourth prototype of the new multirole Mi-38 helicopter has carried out a series of ground runs and completed its first flight at Russian Helicopters' (part of State Corporation Rostec) Kazan Helicopters' test flight centre.

“The Mi-38 development programme is making good progress,” Russian Helicopters deputy CEO, Kazan Helicopters CEO Vadim Ligai said. “Today, for the first time, the fourth prototype of this helicopter – that will soon start certification testing – took to the skies.” “Assembly production has already been launched on the fuselage of the first series-produced units. The Mi-38 has proven it boasts unique capabilities. I am confident that the helicopter will see great demand in Russia, the CIS countries, and on our traditional markets – countries across Africa, South East Asia, and Latin America.”

“The Mi-38 fourth prototype’s first flight was a success,” aircraft commander and test pilot (first class) Vladimir Kutanin said. “The helicopter handles well, all systems worked excellently during the test flight. The developers and producers of the Mi-38 can be proud. As pilots, we really liked the helicopter, it boasts excellent flight capabilities that should ensure it has very bright prospects.”

Aviation experts are confident that the Mi-38’s enhanced payload and passenger transportation capacity, combined with the high levels of speed and comfort achieved, will ensure it becomes one of the most popular models in regional aviation, chiefly for passenger and cargo transportation. Its low noise levels, reduced flight preparation time, roomy passenger cabin, meeting new flight safety standards all open up broad operational opportunities for the Mi-38, including in VIP transport. Mi-38 class helicopters boast greater operational profitability than small aircraft thanks to a variety of features, including the fact that they boast highly efficient engines do not need any airfield infrastructure.

I hope they get them in military version for specific jobs, seams like a very powerful and promising plattform with a class between Mi-8/17 and Mi-26. I am certain there is quite a good necessity to fill this big gap between those classes of Mi-8/17 and Mi-26 of transport capability, to safe money and stay effecient at the same time.
George1

George1 wrote:Airbase in Transbaikalia to Receive “Terminators” with GPS and Touch Screen

I'm sure, that with GPS they mean GLONASS.
George1

Russian Helicopters (part of State Corporation Rostec) has launched the final stage of certification testing on the Mi-38 multirole helicopter. Testing is being carried out on two prototype models of the helicopter fitted with Russian TV7-117V engines.

For further flight tests, the fourth Mi-38 prototype will be fitted with the full suite of on-board data acquisition systems. Starting flight tests on the forth prototype boosts progress towards the Mi-38’s certification – which is scheduled for 2015.

The fourth Mi-38 prototype is a pre-series model, comprising all the systems and components that would be installed on the series-produced helicopters of this type. It differs from the third prototype in its shock-resistant fuel system, which meets the latest emergency landing fire safety requirements. It also boasts larger windows that serve as additional emergency exits.

On 31 October, Mil Moscow Helicopter Plant launched the second phase of flight tests on the third Mi-38 prototype. On conclusion of the first phase of flight-development testing, the third Mi-38 prototype was re-equipped with TV7-117 engines at the Mil Moscow Helicopter Plant assembly shop. The second phase of plant certification tests will run until the end of the year, and will see work completed under the state contract with the Russian Federation’s Ministry of Industry and Trade for 2014.

The Mi-38 is a medium-lift multirole helicopter, designed at the Mil Moscow Helicopter Plant in accordance with AP-29 aircraft certification requirements. It is equipped with highly efficient Russian-made TV7-117 engines and an integrated digital flight navigation system with five LCD displays.

The Mi-38 is one of the most highly automated commercial aircraft in the world. The avionics suite makes it possible to complete route flights, landings, hover, and stabilise in any flight mode. Its IBKO-38 integrated avionics suite provides the crew with high-volume, high-quality data, ensuring high flight-safety levels.

The helicopter’s current capabilities, combined with the streamlined maintenance processes, make the Mi-38 very promising for regional aviation and the execution of certain objectives for commercial operators. Its independence from any base, the efficiency and resources offered by its systems and components, mean that the Mi-38 is more economically viable than the small aircraft planes currently operated in Russia.
GarryB

I'm sure, that with GPS they mean GLONASS.

To date it has meant Navstar, but now with Russian systems it would mean GLONASS.

As the conflict in South Ossetia showed it would be pointless to fit Navstar navigation systems on a Russian military platform... as during that conflict they turned the civilian signal off in that region, so georgian forces could navigate with their military receivers, but the civilian receivers used by the Russian military were useless.
sepheronx

I wonder if they will test out that new navigational (magnetic or whatever it was) system at all for military purposes? Apparently does not require satellites.
George1

Hi i know there is an armoured version of the MI-17 thats used as a gunship with various weapon options, but does anyone know what sort of protection the armour gives? and is there any army using them, numbers built would be good. I did read an article from a Lithuian company offering an upgrade for the MI-8 of a composite armour but this only protected the it from 7.62mm and 5.56mm fired from assault rifles and at a distance of 20m+, the examples given by the company was protection from AK-47, AK-74, and M16 assault rifles. Any information would be great.
I still think if any country was considering in buy the armoured attack version surely they would be better off buying the MI-35 for the use of gunship, i am not sure on price but i the armoured attack version of the MI-17 would surely be cheaper than a MI-35 but no where near as capable.
GarryB

Most models of Mi-17 have some sort of protection... the most commonly seen are those with the external armour plates near the front lower windows in the main canopy.

Armour on helos is heavy and has enormous cost in terms of performance and payload so few transports have a lot of it.

Most helos have protected fuel tanks and a bit of anti spall liner and that is about it.

The armour on the Hind is better and mostly Titanium which is strong and light, but the best protection for a helo is distance... 223 assault rifle ammo will barely pierce sheet aluminium at 800m let alone kill someone, heavier small arms fire is more dangerous and is rather more a threat but protecting a helo as large as an Mi-17 all over from small arms fire only and you will have a 15 ton helo that can carry 2-4 men as a payload... which is obviously not acceptable.