The benefits of a heli-tanker are obvious IMO.
GarryB

It would be cheaper to put a fuel bladder on a 463L pallet and push it out of the back of a C-130 low on the deck near the tanks. If your Team is good you don't even need parachutes on it.

Besides a helicopter with the lifting capacity of a C-130 can deliver the same payload, though over shorter distances and lower speeds, but with much better accuracy and lower trauma.

The Russians know all about pushing loads out of aircraft with parachutes... they invented airborne forces... and before you say some American officer talked about the potential idea in 1917 talk is cheap. The Russians were dropping 10,000 man forces with equipment by aircraft in the early 1930s. After seeing it the Germans and the US and British Started their own airborne force development programs.

Russian flight safety authority Rosaviatsia denies it has any plans to temporarily ground the nation’s fleet of Mil Mi-8T helicopters, the watchdog said on Wednesday following media reports that a ban was being considered.

The Mi-8 and its updated variant, the Mi-17, is the most widely produced helicopter in history, and hundreds remain in service throughout the world, particularly in Russia and the former Soviet Republics.

Recent media reports claimed that the Interstate Aviation Committee (MAK), a CIS flight safety authority, had issued a recommendation to the Mil Moscow Helicopter Factory, the design authority for the Mi-8, that the machine should have modifications to protect passengers from parts of the engine which could break up in an accident.

“There is no discussion of a temporary grounding of the Mi-8,” Rosaviatsia said, and declined further comment.

RIA Novosti was unable to obtain comment from MAK, or Mil in Moscow.

The Mi-8 is a utility helicopter often used in passenger transport roles, particularly in Russia’s oil and gas industry and the armed forces.

A grounding of Mi-8s would have a similar effect to grounding all Boeings in the East.
Austin

Acording to latest AW&ST , Mi-17 is gaining lots of ground due to its sturdiness , reliability ,payload and cost

Mi-38 ready for serial production 'soon', with certification in 2015

Russian Helicopters' Kazan factory is building a third prototype of a new model, the Mil Mi-38, which fits between the 36-passenger Mi-17 and the 82-passenger heavylift Mi-26.

The aircraft is designed to carry up to 40 passengers with a maximum take-off weight of 15.6t and payload of 6t carried internally or by sling.

Development has been held up by delays to a new Klimov engine, though this will be powering the third prototype, with Pratt & Whitney power having got the first two aircraft flying for evaluation by Russian Helicopters' Mil design bureau in Moscow.

It's a nice helo - we just don't need it. And if we can't get the Europeans in on its production and so on, we won't find many other people who need it either. Perhaps in 10 years time or so, if we can find a lot of common components with our other helicopter projects, incorporate more composite and high-tech materials into its design and raise its capabilities to the point where it would offer a significant improvement over the Mi-8 series, at a decent enough value.
GarryB

And it is cleared to have an operational ceiling much higher than the Mi-8/-17 series too.

It is a step into higher quality as well as higher performance, though I agree that the Mi-17 is still very useful and is still selling very well.
Austin

I think Mi-38 is at its beginning of life and Mi-8/17 at the end of its design optimisation , right now it might look like Mi-17 variants are close to Mi-38 parameters but the gap will grow when Mi-38 starts to evolve like Mi-8 did and then Mi-38 will start getting better.
TR1

Another new Mi-26 for the MOD.
George1

The Pentagon has told the U.S. Congress about its decision to buy 12 additional Mi-17 helicopters from the Russian company "Rosboroneksport" for the Afghan army.

The transaction’s amount is estimated at being worth $218 million.

Earlier this year the Pentagon ordered 12 helicopters from the Russian company.

According to the authorities, the Mi-17 is cheaper than American counterparts and easier to teach Afghan pilots to fly.

The Magnificant 8: A great review in 2 parts of the Mi-8 by "Wing of Russia"

Another legendary design of Russian engineering that has literaly served across generations. Huzzah!
GarryB

The most produced military helo in the world!

(and thanks for the vids)
Dima

Thanks for the links guys.

I wish the Mi-38 also have a great future.
George1 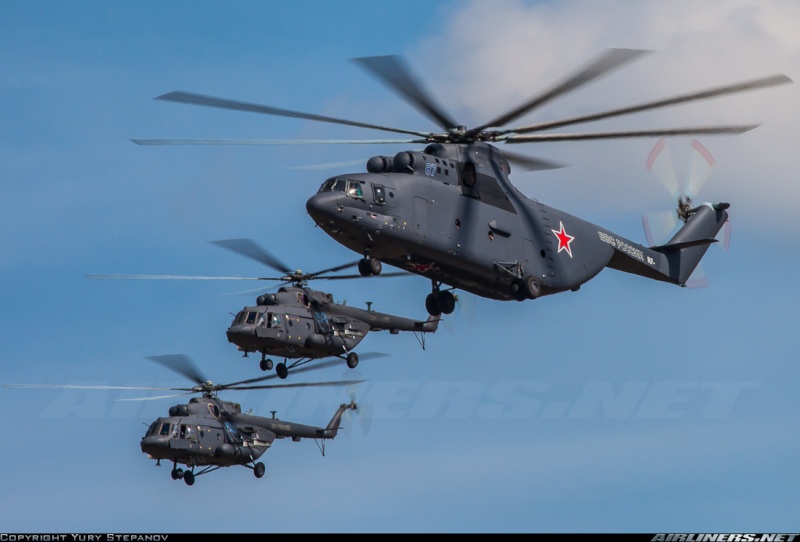 The 7th Mi-26 produced in 2012 has flown...there's a few interesting videos also on the below page

Cyberspec wrote:The 7th Mi-26 produced in 2012 has flown...there's a few interesting videos also on the below page

There's talk on the Ru Net that Algeria is showing interest in buying 12 x Mi-26T2 helicopters.