Named the advantages of the new stealth torpedo ET-1E 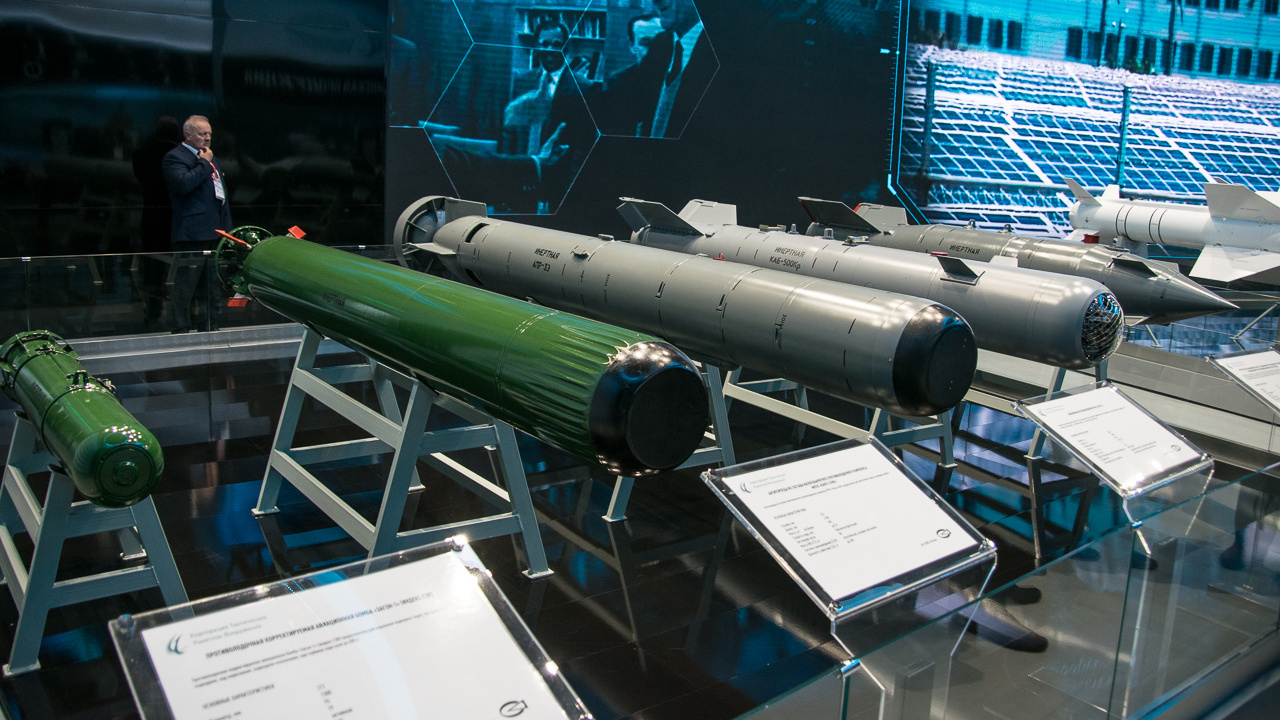 "The advantages of the torpedo include high transport characteristics (speed and range), the ability to use in any area of ​​the oceans, including in shallow areas and under ice in the Arctic and Antarctic, smooth adjustment of the speed, the possibility of subsequent modernization of the design and software ", he said.
ET-1E was presented as part of the Army-2022 international military-technical forum held in August. The declared speed of the 533-mm torpedo is from 30 to 50 knots.
Then the representatives of the KTRV noted that the main advantage of the ET-1E torpedo was noiselessness and secrecy. "It is almost impossible to detect it at long range," they said.

ET-1E can be used from submarines with 533 mm torpedo tubes equipped with electro-disruptive data input units.
The torpedo was created at the State Research and Production Enterprise "Region" (part of the KTRV), which is the largest Russian developer of marine torpedo and aircraft bomb weapons. 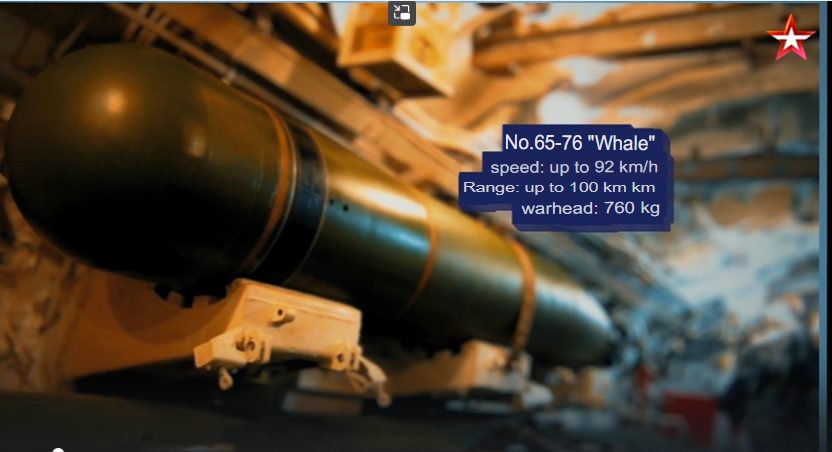 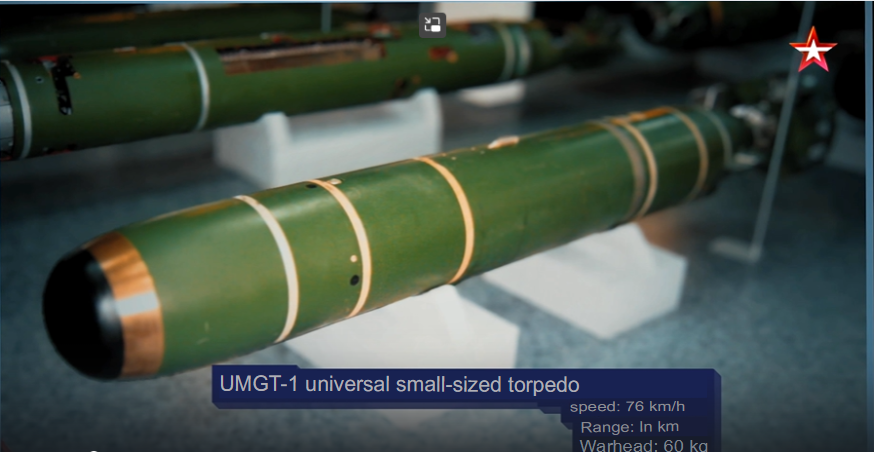 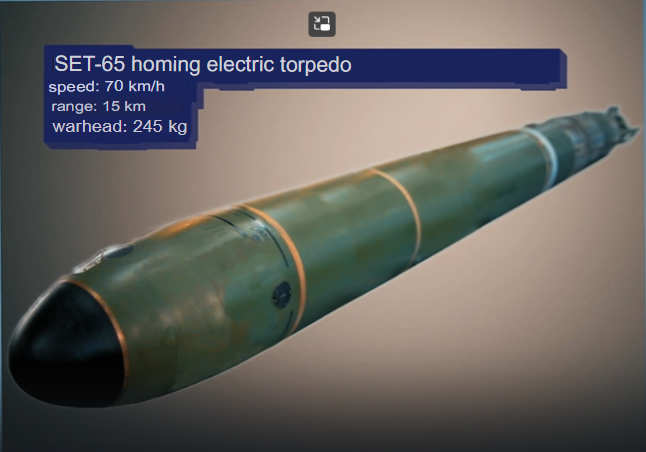 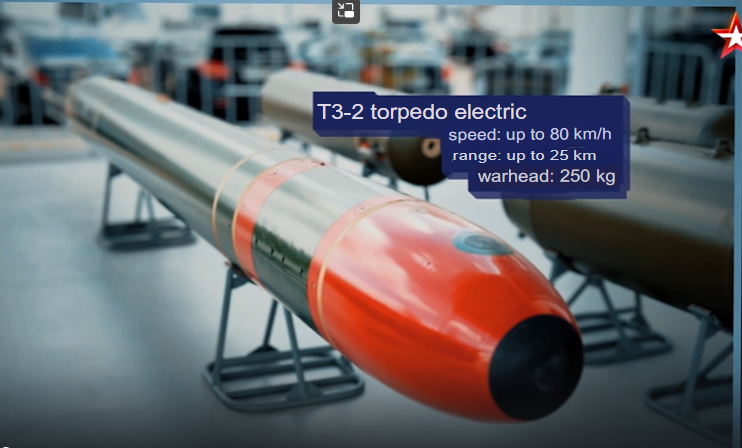 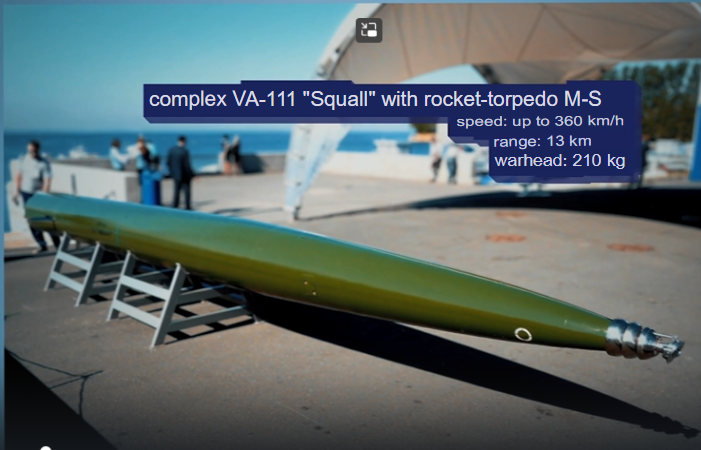 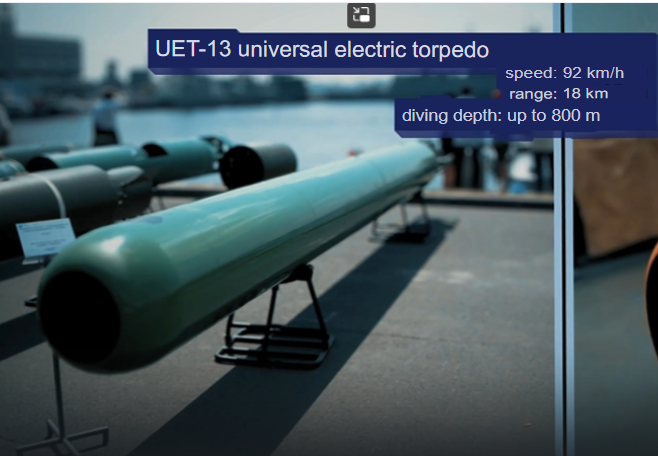 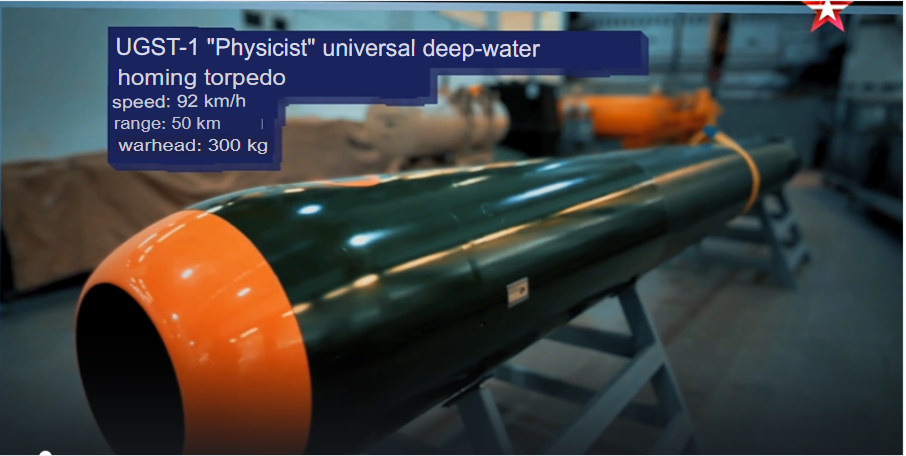 New electric torpedo ET-1E passed tests on nuclear and diesel submarines
The advantage of the torpedo is its improved performance, the developer notes.

MOSCOW, 21 October. /TASS/. The new electric torpedo ET-1E has been tested on nuclear and diesel submarines, confirming the safety of its placement on carriers. Dmitry Benzoruk, deputy chief designer of JSC GNPP Region (part of the Tactical Missile Weapons Corporation, KTRV), told TASS about this.

"From the point of view of safety, it (the ET-1E torpedo) meets all the requirements for the safety of placement on carriers. We have confirmed this safety as part of the R&D (experimental design work), and we have already worked from all carriers of the Navy during testing : from nuclear submarines and from diesel submarines," he said.
According to Benzoruk, the advantage of the ET-1E is its improved performance. "Due to this, a full-fledged operation is ensured: it can be launched in the workshop, "drive" all modes of operation, make sure that it feels normal on all evolutions of the trajectory and confirm its performance," he said, adding that earlier on other products, it was impossible to check the product before issuing it to the media in this way.

"This torpedo is much shorter than those samples that were developed earlier. Due to the use of new technologies, it was possible to make it much shorter than existing samples and get about one and a half meters of margin to accommodate any additional equipment. It is modular, it can take on additional modules," - he said.

The installed equipment can operate on the principle of "one tire", supplementing the characteristics and not changing the design of the torpedo, Sultanahmed Asaliev, acting general director of the Dagdiesel projectile manufacturer, told TASS.

"Due to the fact that it is digital, we connect any module to the torpedo, and it calmly perceives and begins to control it," Benzoruk said.
The electric torpedo ET-1E was developed at the State Research and Production Enterprise "Region", which is the largest Russian developer of marine torpedo and aircraft weapons. The torpedo is capable of hitting any surface, underwater and coastal targets at a distance of up to 18 km in difficult jamming conditions, including in shallow water and under ice. ET-1E can be used from submarines with 534 mm torpedo tubes.

For the first time, the ET-1E was presented at the KTRV exposition at the Army-2022 International Military-Technical Forum, which was held from August 15 to 21 at the Patriot Congress and Exhibition Center. 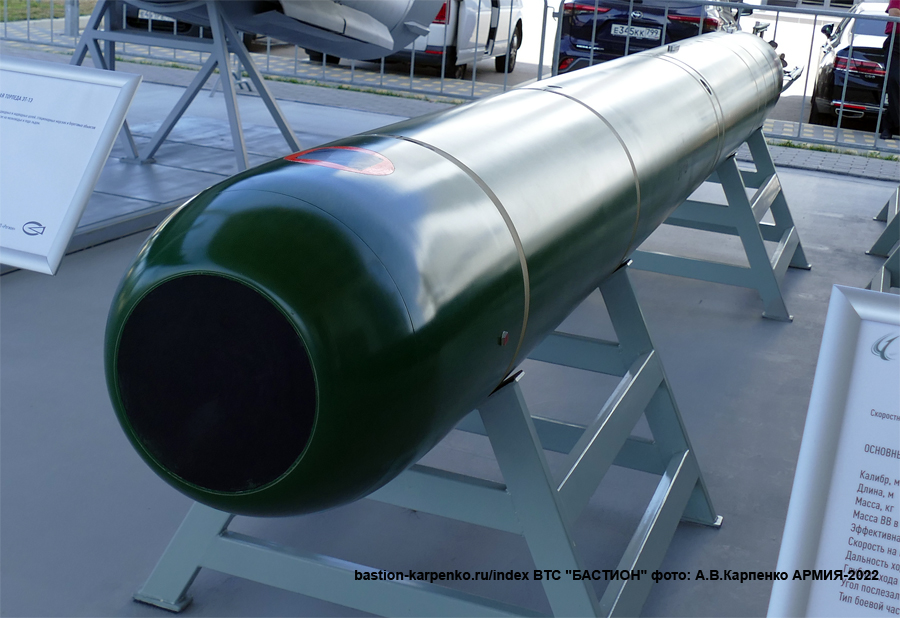 They were developed at the State Research and Production Enterprise "Region"

MOSCOW, 26 October. /TASS/. The first batch of electric torpedoes designed for the Navy of the Russian Federation was delivered to the Russian Ministry of Defense. Dmitry Benzoruk, Deputy General Director of JSC GNPP Region (part of the Tactical Missile Weapons Corporation, KTRV), told TASS about this.
"In 2020, we conducted the entire test cycle. Currently, the first production batch has been delivered to the Navy," he said, answering a question about the supply of electric torpedoes.

The electric torpedo (in export version ET-1E) was developed at the State Research and Production Enterprise (GNPP) "Region", which is the largest Russian developer of marine torpedo and aircraft weapons.
The torpedo is capable of hitting any surface, underwater and coastal targets at a distance of up to 18 km in difficult jamming conditions, including in shallow water and under ice. ET-1E can be used from submarines with 533 mm torpedo tubes.

Earlier, TASS reported that the ET-1E torpedo was tested on nuclear and diesel submarines, confirming the safety of its placement on carriers. It was also said that it can be equipped with additional modules due to its modular design, and in the process of performing tasks, it is capable of independently making a number of decisions, including bypassing interference.
For the first time, the ET-1E was presented at the KTRV exposition at the Army-2022 International Military-Technical Forum. 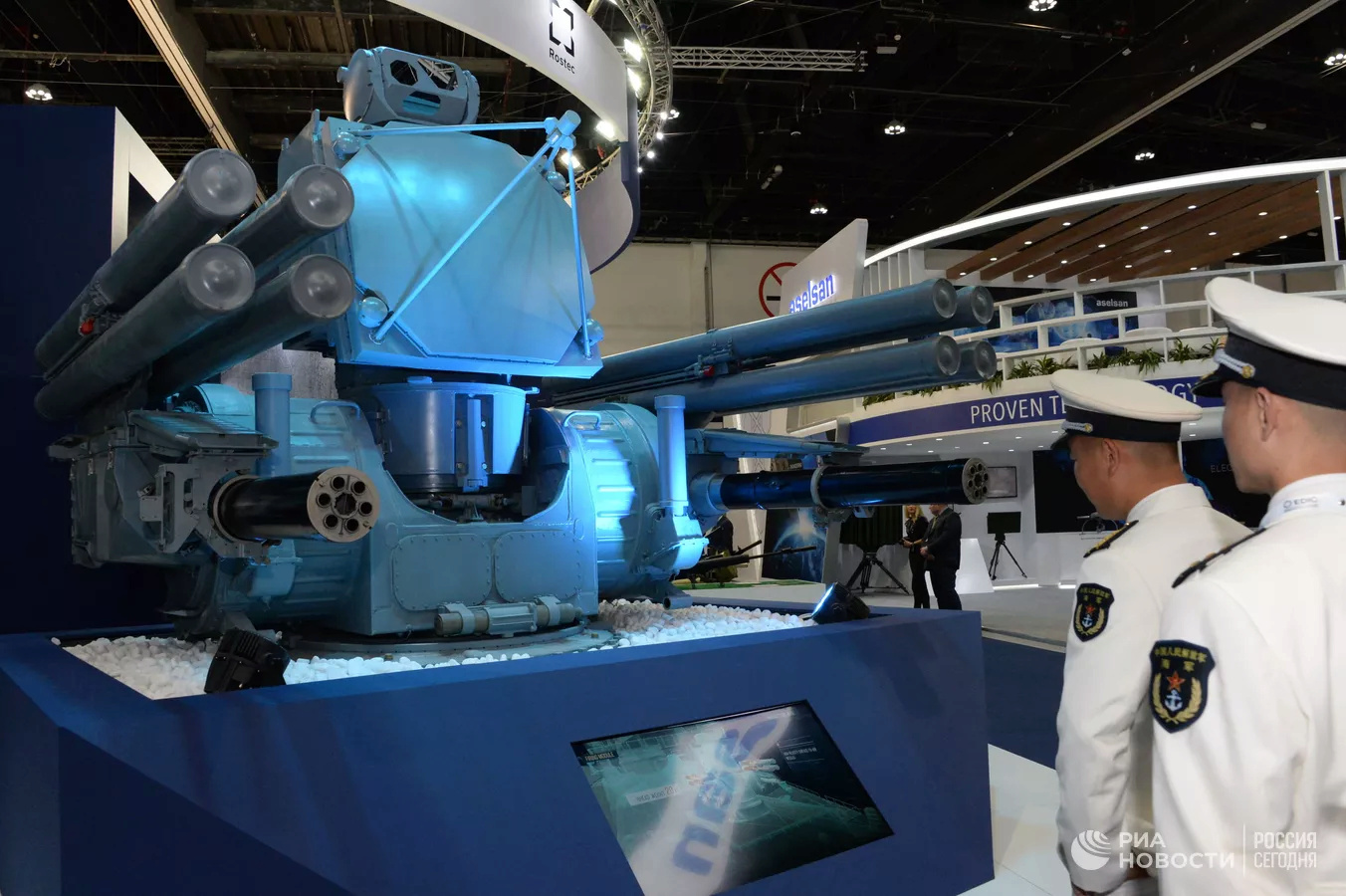 MOSCOW, October 26 - RIA Novosti. Serial deliveries of the latest Pantsir-ME anti-aircraft missile and gun systems have begun for ships of the Russian Navy, Bekhan Ozdoev, industrial director of the Rostec weapons complex, told RIA Novosti.
“Currently, serial deliveries of the Pantsir-ME complexes to the ships of the Russian Navy are underway,” Ozdoev said.

As the industrial director clarified, in the Black Sea, in particular, tests of a small missile ship armed with the sea "Pantsir" are being completed.
He also recalled that earlier the Baltic Fleet received a small missile ship of Project 22800 Odintsovo, which is armed with this air defense system.
According to open sources, today "Odintsovo" is so far the only ship in the combat composition of the Russian Navy, equipped with a sea "Pantsir".

"Pantsir-ME" was developed at the Tula Instrument Design Bureau named after. Shipunov holding "High-precision complexes" and was first presented at the International Maritime Defense Show in St. Petersburg in 2017. The complex was created on the basis of the land version - "Pantsir-SM". The Pantsir-ME combat module, unlike the ground version, is equipped with eight anti-aircraft guided missiles instead of 12, and it also has not double-barreled, but six-barreled 30-mm machine guns.

According to open sources, Pantsir-ME is capable of hitting air targets with missiles at a range of up to 20 kilometers at altitudes from two to fifteen thousand meters. Anti-aircraft guns of the complex can destroy targets at a distance of up to four kilometers. The maximum speed of the targets fired by the "Pantsir" reaches one kilometer per second.