"The air force has got three modernized Ruslan An-124-100s and four more are being updated at the Ulyanovsk Aviastar factory," he said.

The main components of the modernization program for the An-124 are a new avionics suite and navigation system, increase the range by range 5,400 km, and a strengthened airframe. The aircraft will also get a new braking system allowing it to make 30 percent shorter landing runs. It will also get a new SRPPZ-2000 terrain warning awareness system.

An-124 Production not Economically Viable

An-124 Production not Economically Viable 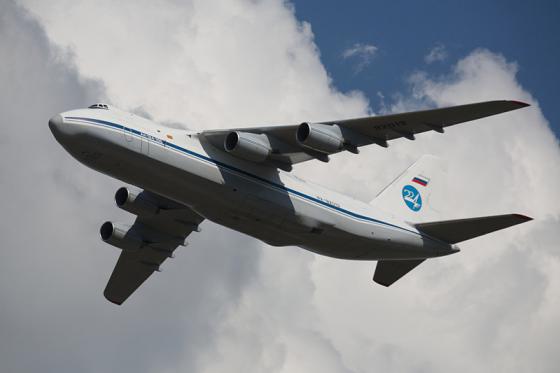 Of the 36 issued Ulyanovsk Aircraft Plant "Ruslan" is currently on the market operates 21 commercial cargo planes. Of these, 10 belong to the airline "Volga-Dnepr", four - Airlines "Flight" and three - "Antonov airlines."

- The structure of the transport market for the An-124, up to 2011, the share of government contracts accounted for 66 percent, 10 percent is "Aerospace", 5 percent - industrial equipment, nefegazovuyu industry - said vice-president of a charter freight Group of companies "Volga-Dnepr" Valery Gabriel. - Demand steady - transportation for all space launches are planned for two or three years ahead of the three operators, exploiting the "Ruslan". Share of earnings in transportation outsize and heavy cargo in the structure of all the orders is 15-17 per cent. This is the work that no one other than the An-124 can do - no goods can be delivered by any other aircraft. This "piece" of the approximately one billion dollars.

According to Gabriel, the amount of money earned "Ruslan" is decreasing every year. Aircraft in service is more expensive, the proportion of general cargo has fallen to 5-6 percent (previously it was up to 15-17 percent). Transportation on the An-124 become economically unviable.

- If we look at the problem through the eyes of an ordinary businessman, then there are four main issues. Three of them are related to technical unit - says Gabrielle. - First of all, the aircraft does not meet the future requirements of the ICAO (including noise and emissions) if it does not have a new on-board equipment on a digital platform, it will lose the main markets, where he earns about 80 percent of their money - this is Europe, USA , Canada and several other countries. The second - a "cut-off" for the engine thrust at higher temperatures. Seemingly insignificant factor, but on a widespread route that fly all three airlines - "Kabul - Baku" - with an air temperature of 33 degrees, "Ruslan", "pulls" only 10 tons. Ordinary merchant difficult to explain why the documents indicated 120 tonnes, but in reality it's different. In calculating the total price for the customer this figure - just a stone around his neck.

In order to keep the business associated with the carriage of outsize cargo operators are placing new demands. Maximum load capacity upgraded An-124 should be 150 tons compared to the current 120-; range with a cargo of 120 tons - 6-7 thousand kilometers, the crew - two men. It is necessary that the aircraft is in line with future requirements of ICAO to the year 2035-40. In addition, the aircraft must have a digital cockpit, which would "build" function tighter piloting, and its cost-effectiveness should be increased to at least 30 percent. All this, according to the airline, the aircraft will maintain its market positions.

- In the meantime, "Ruslan" today - a "VAZ-2101" in the aviation industry - says technical director of "Volga-Dnepr" Victor Tolmachev.

According to him, the cost of one An-124 for the entire cycle of its operation (60,000 hours), which consists of its original price and maintenance costs, by the end of the resource increases by 18 times. "Boeing" - only four times.

It's a heavy-lift strategic aircraft. No two ways about it, if the capability is needed then the price must be paid.

Surprised though, very surprised that with the restart or imminent of An-124 production; such an upgrade (digital cockpit, new engines & materials) hasn't already become standard already. You would think it would, especially given the large injection of investment and new production lines. Or has it after all?
Admin

The premise for restarting production was based on commercial sales as the market for large military transporters is limited. No real investment has been made in the Ruslan line yet, it is still being analysed.
GarryB

Most of those upgrades like increase in payload to 150tons and digital cockpit, and of course reduced crew size were all supposed to be part of the upgrade/improvement to the aircraft.

For payloads like trains it is much easier to load in the roll on roll off design of the An-124.
TR1

Between the military and civilian domestic orders they already have enough to make production viable.
Engine choice will be between modernized D-18 and PD-30.
I think most of the complaints about SOviet Era An-124 will be addressed, after all, decades have passed since the original bird took to the skies.
Admin

There is a market for it, but oversize load revenues are only $1 billion annually. Transporters like Airbus Beluga cut into that.
GarryB

With new PD-30 engines the operating costs could be reduced to the point where it becomes more economically viable to transfer heavy material via aircraft.

I mean lets face it... in the 1970s if you wanted to move 110 ton locomotives from one country to another your choices did not include aircraft.

In the near future I really do think that there will be serious competition from very big airships able to pick up loads in harbours and carry them inland to the job site, whether it is in the middle of a desert or half way up a mountain.

Having said that the Russian military has decided it wants mobility and the Ruslan and its future variants will be a big part of that.

Hopefully the focus on the Far East and the Northern focus will make for an increase in requirements domestically so they can open those areas up to progress.
Mindstorm

At the end of the day Reason and mutual scientific/production/export potential advantages have prevailed.

Finally, this brings hope that compromis could be reached upon AN-70 production and that we might see it in Russian Army.
Hachimoto

What make it impossible for russia to manifacture such aircraft alone?
xeno

Hachimoto wrote:What make it impossible for russia to manifacture such aircraft alone?

Nothing.
It is Ukraine's dream to steal Russian people's money to develop their technology, to create jobs for themselves and compete Russian products in the international market(they say they won't but they will).
And mock Russians and prove Ukraine is superior later.
Always remember the title of a Ukraine article " We are not brothers, we are not even friends"
TR1

Hachimoto wrote:What make it impossible for russia to manifacture such aircraft alone?

Nothing.
It is Ukraine's dream to steal Russian people's money to develop their technology, to create jobs for themselves and compete Russian products in the international market(they say they won't but they will).
And mock Russians and prove Ukraine is superior later.
Always remember the title of a Ukraine article " We are not brothers, we are not even friends"

You are talking about butt hurt anti-Russian Ukranians.

Not all Ukrainians are like that, by far.
Can you blame Antonov for wanting to be part of the process?
TR1

At the end of the day Reason and mutual scientific/production/export potential advantages have prevailed.


Now the most interesting to look for, is engine development.

This is where An-124 is mot outdated.
GarryB

What make it impossible for russia to manifacture such aircraft alone?

The intellectual property rights for the An-124 are held by Antonov so in return for producing the plane they want a piece of the pie.

I do think the An-70 should enter Russian service as it is a very good plane that is exactly what the Russian military wants and needs.

I would love to see the An-22 replaced with the Il-106 but that seems to be unlikely.


Now the most interesting to look for, is engine development.

This is where An-124 is mot outdated.

I would love to see the An-22 replaced with the Il-106 but that seems to be unlikely.

Actually there is a hope:
http://alexeyvvo.livejournal.com/35105.html
Can be something even better than Il-106.
Hachimoto

This way russian gov are going to screw Ilyushin

Ahem, Il-476 is alone fat cheese for Ilyshin.
39 firm orders for the transport alone, and the tanker is not far behind.
GarryB

Perhaps you guys are reading it differently... I read that link as basically saying that Il have submitted a new long range aircraft cockpit design to the ministry of defence for a tender... they would hardly need to do that for a new modification of the Il-476 and they have no part in the An-124 upgrade... which suggests to me that either the Il-106 is back on, or another related long range aircraft is to be developed.

The current order for 39 Il-476s will dramatically increase because the A-100 next gen AWACS aircraft is based upon it, plus new tankers and also other aircraft types including the A-60 will all be based on it... as well as a few new transports.

Hopefully this new long range transport will be an aircraft in the payload range of perhaps 100-110 ton range... just above the C-17 and a fraction of the cost of the C-17. This of course will be the peak load with normal transport loads of 70-80 tons being more normal.
a89

It seems that Aviastar is ready to resume An-124 production. The drawings have been digitalised. I assume this process was similar to the Il-476. Can someone who speaks Russian provide better understanding?

Avistar modernizes another An-124 for MOD.
a89

Ukraine and Russia reached an agreement on production, now they are testing the production scheme.

3rd An-124 modernized for the MOD this year.

The airframe has been waiting repair for 9 years.
George1

krainian Cabinet of Ministers approved the draft inter-governmental agreement with Russia on serial production of An-124 aircraft powered by D-18T engines. It is stated in the decree of the Ukrainian government, RBC-Ukraine reports.

"To approve the draft agreement between the Ukrainian Cabinet of Ministers and Russian government on implementation of measures of State Support for resuming the serial production of An-124 aircraft powered by D-18T engines and their modifications", - said in the document.

Moreover, the Cabinet authorized the Minister of Industrial Policy of Ukraine, Mikhail Korolenko, to sign the abovementioned document.

We remind you that following the results of a meeting of the committee for economic cooperation between the countries with the participation of the head of the Ukrainian Cabinet of Ministers, Nikolay Azarov, prime-minister of Russia, Dmitry Medvedev, said in October 2013 that the production of these jets will be resumed “as soon as possible”.

"At present we are completing the process of establishing a joint venture related to production of An-124. We hope to launch the production as soon as possible", - he said.

The serial production of An-124 was being carried out during the period from 1984 to 2004. A total of 56 aircraft of the type have been manufactured.
Sponsored content