In the direction of Zaporozhye, the offensive slowed down

Russia nearly lost to the Germans and French just one nation at a time.

In both cases Russia was fighting the whole of Europe. 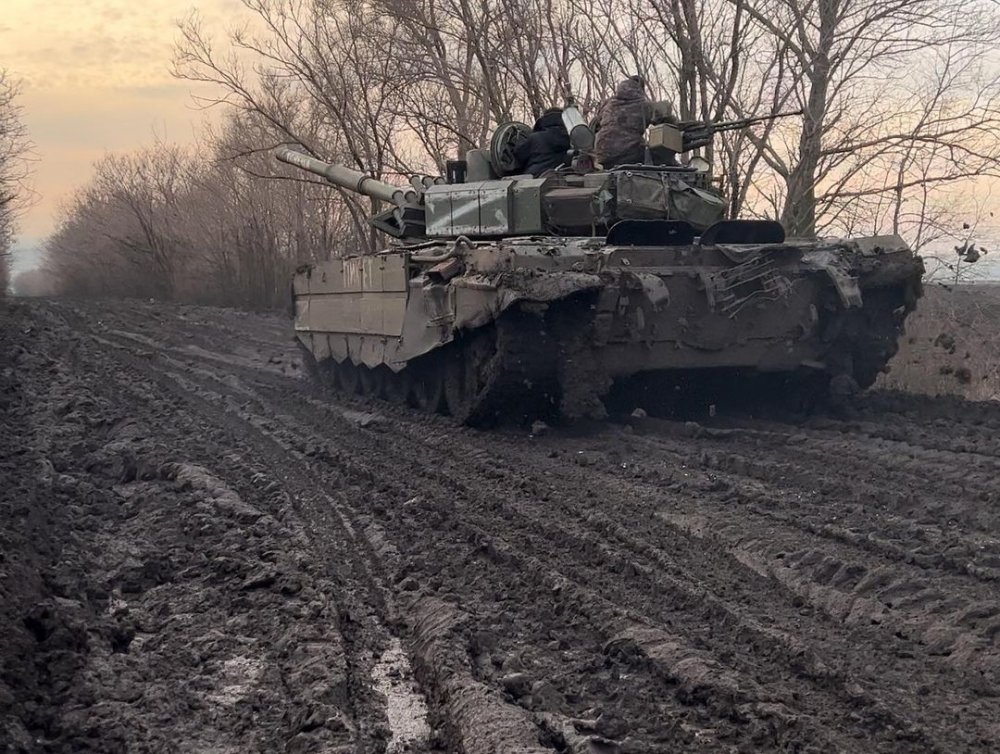 Russia nearly lost to the Germans and French just one nation at a time.

Against Germans, Staline was dumb to believe germans wouldn't attack which made their attack successful at first but soviet overwhelmed them. Key targets of germans were still far away and their supply routes where too long to say they were nearly winning.

Same in this war. US are throwing some limited equipement to Ukraine which gets destroyed as soon as it sees the front. Russians already won. They are left with few tanks to send and then nothing. They have empty stocks and aren't even buying new ones. Ukraine is loosing all its nazi fighters, nato has emptied its stocks. They can't stop any offensive now. Then most likely baltic coubtries will be next, they have no more defences there nor weapons.

Russia wasn't fighting all of Europe in WW2..that's a complete lie.

They did not fight the French, brits, Italians. Had had help with the poles.

As for Napoleon, again did not fight the Brits and some other European countries during that war.

Russia did fight the Brits during the Napoleonic wars (eg the British naval siege of Baltiysk in 1808 and the lead-up to that), very minor in the grand scheme of things (and Russia was allied with France at the time), but still, nitpicking is fun.

The big break and the biiiiiiig invasion of 1812 however included a crapload of French allies, mainly the Polish and the Austrian Empire, but many others too. So it wasn't just the French.

But surely guys there has got to be a better thread somewhere for this kind of talk?

On topic: Arrivals in Sumy, apparently. Is it beginning?

All the yammering about the Leopard-2s is ludicrous. The U-rope part of NATzO does not have 2,000 of them to send over. And
even if it did, then why is the expectation that they would enable Kiev regime victory? Are they more resistant to anti-tank weapons?
Are they sci-fi level superior to Russian tanks? Anyway, everyone with a clue and not a rabid fanboi or ideologist is pointing out the
obvious that these tanks will not make a difference. Retired German officers are particularly vocal since they have some spine.

Does it mean Belarus will soon join the fight?

Does it mean Belarus will soon join the fight?

Unlikely, the Belarus forces seem to be mostly as dissuation instrument against Polish adventurism. Belarus is effectively Russia's soft underbelly and if Lukashenko had not properly activated his forces, NATO wouldn't have hesitated in plowing through forcing it's Guaido politicians on Minsk.

How long until crews are trained?
Dr.Snufflebug

Now there are rumors that both foreign minister Kuleba and prime minister Shmyhal are to be offed.

And compromat on defence minister Reznikov has started being spread on Telegram, so they might be prepping for his departure too.

Bunch of more people were sacked earlier today, mostly ministry deputies as far as I can see.

So, any guesses? I mean, "corruption" sure, but they all are and always have been thoroughly corrupt. It's Ukraine, after all. Didn't bother anyone before.

Watching Gonalo Lira's livestream, Dima from the Military Summary channel claims that Russian Telgram is chattering about this
being a substitution of British controlled elements with US controlled elements. So this is supposedly not just rats fleeing the sinking
ship. But at the same time Dima comes off as a Belorussian opposition clown with his line that Wagner is being decimated and that
Russian forces suffered 30% losses of their "best" troops in "storming" of Mariupol. As I recall, Mariupol was not stormed and
it was Chechen Rosgvardia units doing the bulk of house to house combat. So I do not think Dima is credible.

I did not aim that at you. It is just that an outrage against certain monarchist and chauvanistic people I have met in the past. And the sad thing is that they are not Russians.
higurashihougi

Former Polish Foreign Minister Radoslaw Sikorski has suggested that the government in Warsaw considered partitioning Ukraine in the first weeks of the military conflict between Kiev and Moscow. His comments came in an interview with Radio ZET on Monday, prompting a strong retort from the country’s prime minister, Mateusz Morawiecki.

Sikorski was asked if the ruling Law and Justice (PiS) government had ever entertained the idea of dividing up Ukraine. He replied by stating that there was “a moment of hesitation in the first 10 days of the war, when we all didn’t know how it would go, that maybe Ukraine would fall.”

“At the moment, such threats are the aspirations of NATO to expand by incorporating Finland and Sweden, as well as the use of Ukraine as a tool for waging a hybrid war against our country” by the US and its allies, the general said in an interview in the Argumenty i Fakty newspaper on Monday.

According to Gerasimov, the Russian military’s response to those challenges will, among other things, include the creation of the Moscow and Leningrad military districts and the formation of three motorized rifle divisions in Kherson and Zaporozhye regions, which joined Russia in autumn after referendums, as did the Republics of Donetsk and Lugansk.

Also on the agenda is putting together an army corps in the Republic of Karelia, located in Russia’s northwest and bordering Finland-

This is probably 3rd army corps, 1st is in DPR, 2nd in LPR, and 3rd in Kherson, while new divisions will comprise it

But 90% of the combat power is in Russia proper

These servicemen are more effective than wagner in combined arms

If the Russian army went in they'd reach Fastov and Brovary in a week, as they did when the war started

But the politicians elected for attrition, and low tempo actions

Well, whatever the underlying cause of this is, I think one can rest assured that the replacement crew to surround Zelensky henceforth will be handpicked yes men, vetted and approved by the US.

Guess it could be reminiscent of the situation immediately post-Maidan, when the new guys were selected.

How long until crews are trained? wrote:

The Polish ones will be manned by Poles, you can count on that.
caveat emptor

@Scorpius
There is a tank academy in Kazan, so that might be the reason.

@caveat emptor
I am saying that this fact may have a direct connection with the appeal to create a new type of tank units for training new tactics. As well as the fact that we haven't heard anything more about him since that moment.

Ukraine's SBU conducted another terrorist attack, this time in Berdyansk. It was directed at the Berdyansk local Valentina Mamay, who runs a shelter for homeless animals and who stayed at her establishment and continued her work after the Russians had come, which made her a "collaborator" and thus marked for death.

Luckily, it seems like the car bomb failed to kill her. She is hospitalized with a concussion and apparent non life threatening injuries.

I have lost count of how many of these terrorist attacks (mainly car bombings) the SBU has carried out so far. After a "successful" string of such assassinations last year, I think the Ukrainians who know they are targeted (eg people in the local administrations, companies, schools etc in these cities) have taken a lot of precautions now, and the FSB is no doubt working there too.

So now the SBU is going after any others they can find, who do not expect it.

That's why SBU staff should be hunted like mad dogs, 24/7.
Not a single SBU location should remain safe.
Israelis have a very nice tactic.
They just pick homes where the hamas officials or goons live in, and erase it to the ground.
If multiple families live there - they announce that the house will be erased on 12:00 next Friday, so it would be better if nobody is there.
Like I said - one good bomb run down the Dnepr, starting from the north where Januk residency was placed. And Yatseniuk two streets south-west ... And again, and again, and again ... Till there will be no homes of oligarchs, SBUshniks, military high command etc left. Not a single one.

They just pick homes where the hamas officials or goons live in, and erase it to the ground.
If multiple families live there - they announce that the house will be erased on 12:00 next Friday, so it would be better if nobody is there.
Like I said - one good bomb run down the Dnepr, starting from the north where Januk residency was placed. And Yatseniuk two streets south-west

These are nazi tactics and I don't need to remind you that there is a good reason why such tactics and people who use them are hated and wouldn't be left alive if not for big buddies protecting and vetoing against any resolution or sanctions.

There are already certain departments within the FSB among younger generation working on social media, collecting and archiving the ЦИПСОшники that are taking part in the disinformation front. What they make of it is a different question and nothing of the relevant stuff will be ever going public. I wish they would hunt down all and everyone who ever worked even remotely for Kiev/Washington like the Germans still do with even some 90 year old Gardeners of some SS-Officers.

But creating 100 collateral kills for maybe but with low probability killing the actual target like the Zionazis do is just pure evil and we know that such tactics don't work. With such tactics the influx of more HAMAS/Hezbollah recruites always outnumber the one they can manage to kill, however, we know they doing that on purpose to never have reason to stop. This is not the case for us. We can not allow that to happen.

That is a fact that will not change

I support the attrition strategy, but only to preserve Russian combat power

Not as a means to protect or coddle the Ukronazis

If some hohols house gets blown up, it won't change anything- they recruit just fine as it is and the VSU is much larger than Hamas and has an infinite recruiting pool it seems like

Those Ukros that don't sign up, do so out of self preservation , not because they love Russia