A long and very sobering read.

That was bad enough, but how about this?

Here comes something stunning out of the left field.

How about Covid proven to be all over Italy by early September 2019? Found by blood analysis of a totally unconnected lung cancer trial and all who tested positive were asymptomatic.

This is before anything at Wuhan.

A picture of its locations in Italy is in the video that includes Sardinia and Sicily and next to the northern borders, so was it also in France, Switzerland, Austria etc?

It indicates that as many as 5x may have had it than the official figures showed, as those figures were based on only symptomatic people meaning it was claimed to be more deadly than it actually was..

All the clowns running around claiming that less than 10 in a million are vax injured need to be drawn and quartered.

Worth highlighting from the JohninMK link above:


A new study has now surfaced, the results of which are terrifying.[25] A researcher at Kingston University in London, has completed an extensive analysis of the VAERs data (a subdepartment of the CDC which collects voluntary vaccine complication data), in which he grouped reported deaths following the vaccines according to the manufacturer’s lot numbers of the vaccines. Vaccines are manufactured in large batches called lots. What he discovered was that the vaccines are divided into over 20,000 lots and that one out of every 200 of these batches (lots) is demonstrably deadly to anyone who receives a vaccine from that lot, which includes thousands of vaccine doses.

He examined all manufactured vaccines—Pfizer, Moderna, Johnson and Johnson (Janssen), etc. He found that among every 200 batches of the vaccine from Pfizer and other makers, one batch of the 200 was found to be over 50x more deadly than vaccines batches from other lots. The other vaccine lots (batches) were also causing deaths and disabilities, but nowhere near to this extent. These deadly batches should have appeared randomly among all “vaccines” if it was an unintentional event. However, he found that 5% of the vaccines were responsible for 90% of the serious adverse events, including deaths. The incidence of deaths and serious complications among these “hot lots” varied from over 1000% to several thousand percent higher than comparable safer lots. If you think this was by accident—think again. This is not the first time “hot lots” were, in my opinion, purposefully manufactured and sent across the nation—usually vaccines designed for children. In one such scandal, “hot lots” of a vaccine ended up all in one state and the damage immediately became evident. What was the manufacture’s response? It wasn’t to remove the deadly batches of the vaccine. He ordered his company to scatter the hot lots across the nation so that authorities would not see the obvious deadly effect.

All lots of a vaccine are numbered—for example Modera labels them with such codes as 013M20A. It was noted that the batch numbers ended in either 20A or 21A. Batches ending in 20A were much more toxic than the ones ending in 21A. The batches ending in 20A had about 1700 adverse events, versus a few hundred to twenty or thirty events for the 21A batches. This example explains why some people had few or no adverse events after taking the vaccine while others are either killed or severely and permanently harmed. To see the researcher’s explanation, go to https://www.bitchute.com/video/6xIYPZBkydsu/ In my opinion these examples strongly suggest an intentional alteration of the production of the “vaccine” to include deadly batches.

Turdope making theater of getting a booster shot. In reality this is a saline shot.

Just read a new report stating that we're quite possibly dealing with a 23k cases of myopericarditis per 1 million mRNA jabs.

That's not taking into account the multitude of other side effects related to the jabs.

At this point they'd have to physically hold me down to make me have one of their death jabs. I ain't taking that shit under any circumstance, thank you very much.

Study is from Thailand and is referred to by Dr McCullough in this video here. Again a myopericarditis rate of 2.3 percent.

The Thai study I was made aware of recorded a minimum 6% injury rate (hypertension, heart irregularity, and various levels of heart damage).
I am not going to give these f*ckers any slack on their definition of what is an injury. I am still getting heart irregularities 7 months after
my single dose of alleged Novovax vaccine. The scumbags likely gave me an mRNA shot and claimed it was Novovax. Then why did they
not load the syringe from the actual vial and just brought out the filled syringe from a hidden location? I know that in ebil Rosshiya the
practice is to fill the syringe in front of the patient. Clearly this is not case in freedumb west.

Regarding the Mercola link above, how typical for these swine to attack the editor instead of debunking the research paper. This is the
"speed of science" today. A medieval, politically corrupt crime against humanity.

I would not rule this out. They know that people sceptical of the narrative would opt for options deemed 'safer' - like Novovax.

The psychology behind it is one of sociopaths. Think according to the lines of 'I had to endure the mRNA vaxx, so now you must too'.

Montagnier and his team identified a segment of the spike protein that theythought had characteristic prion-like features. Within that segment is a piece that has five amino acids, YQRGS. The prion protein has [the same] piece ... Except for the middle one, the other four [amino acids] are all identical with this piece near the C-terminal end of the prion protein. So, it's really perfect. It's a place where, if you get antibodies to that, it’s basically a death sentence.” wrote:

The vax spike protein is an engineered poison. It is intended to cause harm. This harm is enabled by corrupt regimes around the world
forcing mandates for "vaccination" even on people who have already recovered from covid infections and thus by definition do not need
any covid vaccine.

After making the mistake of submitting to a mandate to damage my health and getting the first dose, it was the smartest choice
for me to not take the second dose. It would have f*cked me up on another level or even killed me. I got an appointment with
a cardiologist but he was a gatekeeper and a statin-pusher fraud who fobbed off my vax injury as some sort of post-vax adrenaline
spike. This is the level of medical treatment in Turdope's Kanada. A toilet.

The Mengele swine are now trying to foist vax mandates for the flu.

A national emergency because of the flu.

This is beyond clown world.
Kiko


Chaos Breaks Out As Reporters Ask Fauci About COVID Origins, by Tyler Durden for ZeroHedge. 11.22.2022.

Chaos broke out in the White House press room on Tuesday, after multiple reporters asked Anthony Fauci questions about the origins of Covid-19 and related investigations.


"You need to call people across the room! She has a valid question, she’s asked about the origin of COVID," a reporter from Africa Today shot back.

I want to see the mandate maggots strung up with piano wire.

Read the comments: strokes galore. I should be happy that I did not get a stroke. Thank you Turdope!

The strokes indicate that the vax causes bleeding. This would be consistent with the heart injuries as well. 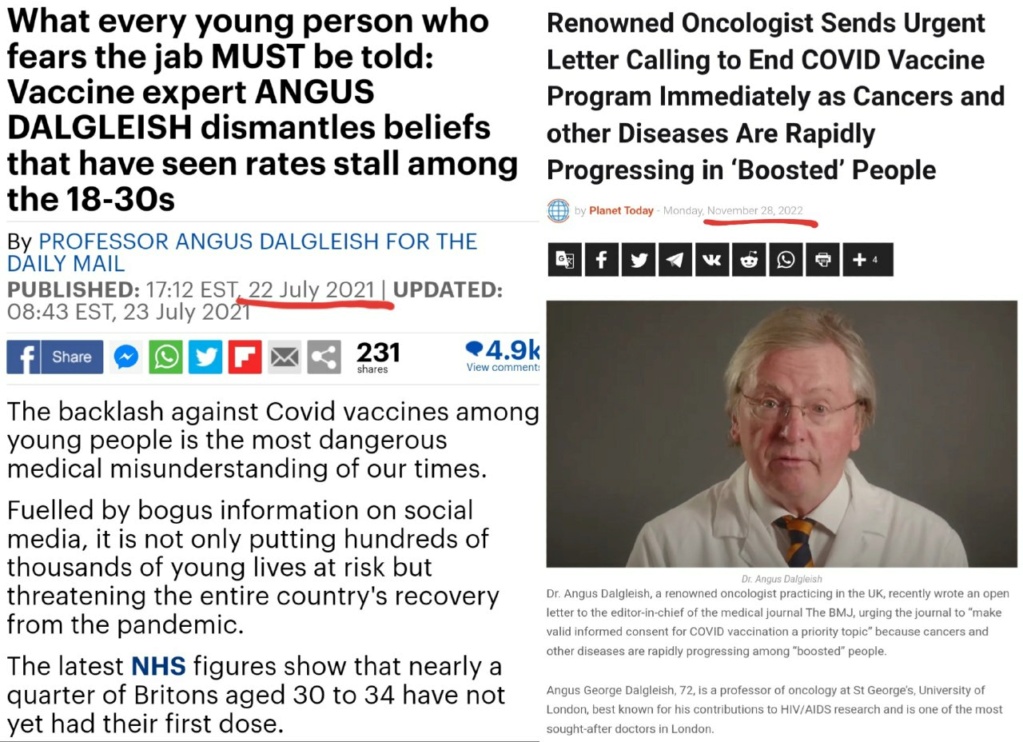 Previously pro vaxx doc does 180 after he sees 'turbo-cancers' skyrocket.

The fig leaf of science is transparent. No actual scientific value is obtained from playing around with semi-fossilized viruses. They are not
going to have some totally new type of genetic material (i.e. not DNA or RNA). So it is just pointless variation and we have active viruses
already that we can study to death. 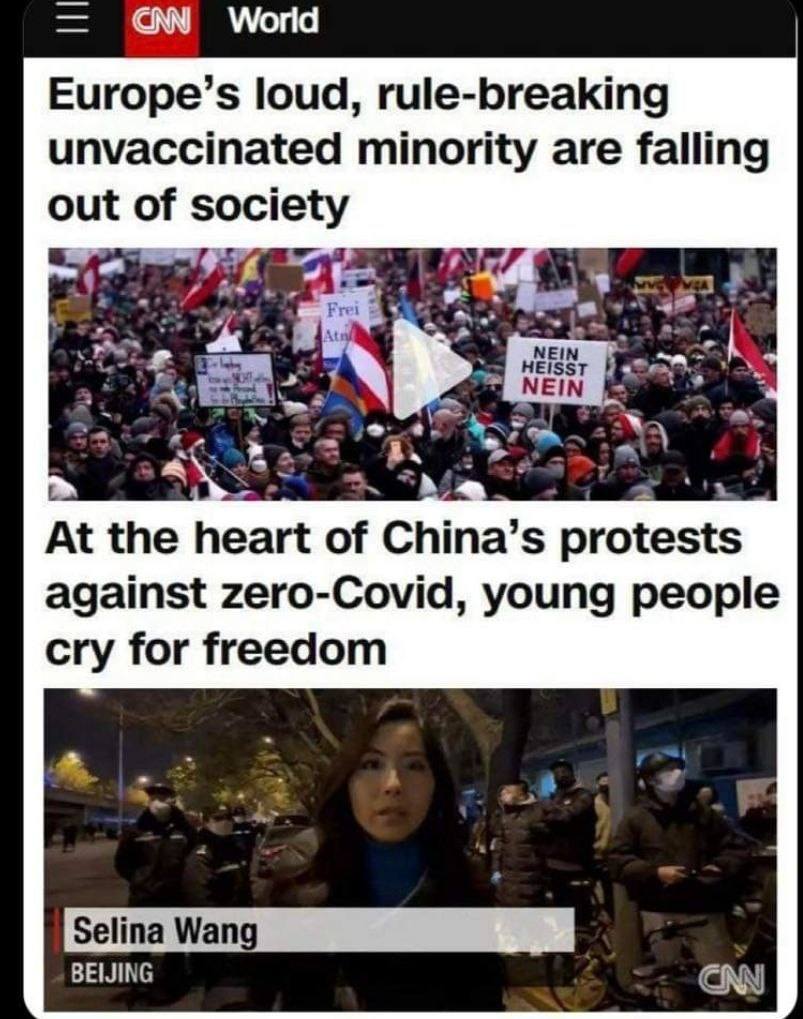 Establishment politicians and media outlets have praised the ‘freedom-loving’ Chinese, after demonizing those who spoke out against their own lockdowns.