Russia will purchase two Airbus jets for its leadership in a deal worth $235 million with a European aircraft manufacturer despite promises to help its own struggling aeronautical industry.

The entire deal, including the building of four Mi-8 MTV-1 helicopters, will cost the Kremlin's property department 18.6 billion rubles ($652.6 million).

"Clearly all our products need to be electronically based but not all our design bureaus are ready for this, which is a big and separate problem," Medvedev told a session of the Russian aviation security council.

Medvedev said Russian planes should be competitive with their foreign rivals in terms of engine noise, fuel economy and flight distance.

"You need to work better instead of demanding money," he said.

The Russian government announced on Thursday it was buying two Airbus jets from Europe and is building two Russian Ilyushin Il-96-300 airliners for the president.

Last year it was suggested that the Kremlin was looking at buying the new Sukhoi Superjet 100 regional airliners, which are currently undergoing certification. The company has received more than 100 orders from Russian airlines and around 200 in total.

The president called for bringing in new passenger aircraft, while National Security Council head Nikolai Patrushev said the focus would be on the provision of regional jets. "People should not be flying from one part of the country to another via Moscow," he said.

A plan to develop the country's aviation industry through 2020 is being drawn up and would be presented to the president, Patrushev said, adding that the development would occur in cooperation with foreign partners.

"We are not going to reinvent the wheel," he said.

Medvedev said state support for the industry was possible, but only at the initial stages.

He added that new advanced models need to be designed and put into operation by means of innovative development of the aircraft building industry, encouraging design efforts and closer cooperation with traditional and new partners alike.

He also criticized the network of military aerodromes and said he had given instructions to build several large military aviation bases on strategically essential routes. He said they should be re-equipped, including with unmanned aircraft, in a bid to raise military potential of the current aviation groups.

I am sure they will work better when they are actually building aircraft.

Having actual money flow does wonders for most companies trying to be at the leading edge of technology, and certainly the fact that most of their avionics need to come from outside Russia should be considered more of a problem.
Austin

GarryB wrote:I am sure they will work better when they are actually building aircraft.

Having actual money flow does wonders for most companies trying to be at the leading edge of technology, and certainly the fact that most of their avionics need to come from outside Russia should be considered more of a problem.

When they are building one or two aircraft a year these aircraft are practically hand made by part time workers.

When the requirements ramp up to needing a hundred planes a year then investing in production facilities and full time staff will effect product quality in a good way.

The Kremlin selects Tu-214 as platform for special mission aircraft

June 1, 2009, the first day of this summer, seems to be the turning point for the program of the Tupolev Tu-214 narrow body airliner. That day the Kazan Aviation Production Association named after Sergei Gorbunov (KAPO) delivered two Tupolev Tu-214SR aircraft, registration RA-64515 and RA-64516, to the Special Air Detachment under the Administration of the President of Russian Federation (the operator is also referred to as the Moscow branch of GTK “Rossiya”, GTK stands for “State Transport Company”). On the same day, both aircraft were ferried to Moscow Vnukovo airport, their main station, and were inspected on arrival by Russian prime-minister Vladimir Putin. Reportedly, he made some remarks about high performance and high manufacturing quality of GTK Rossiya’s new assets, and issued command to continue with the plan on more Tu-214s for governmental structures.

The Ministry of Defense will acquire two special Tu-214SUS aircraft

Kazan Aviation Production Association named after S.P.Gorbunov will deliver two special Tu-214SUS (airborne communication center) aircraft to Russian Ministry of Defense in 2012, Lenta.ru reports. These jets have been assembled in late 2011. According to a source, one Tu-214SUS has already been delivered to the customer and the second one will be delivered by the end of the year.

The Kazan enterprise has also delivered four special aircraft – Tu-214PU (control point) and Tu-214SR (radio relay aircraft) to the Ministry of Defense earlier. The specified six jets have been purchased from KAPO in the network of a single contract and then Russian Ministry of Defense has acquired two additional reconnaissance Tu-214ОS aircraft, intended for taking part in the Open Skies international program.

According to the source, one Tu-214OS has been assembled last year, but it has not been delivered to the customer yet. It must undergo the certification and state testing this year. The customer will acquire the jet in late 2012. The second one will be assembled by the end of the year and it will be delivered in 2013. As expected, an order on several Tu-214SRs may be placed soon.

The basic Tu-214 is the modification of medium-haul Tu-204 with the extended takeoff weight (110.8 tons). Тu-214PU, Тu-214SUS and Ту-214SR are the special aircraft intended for Presidental Administration. The jets are equipped with special communications equipment.
Viktor

This year the Kazan Aviation Plant named after Gorbunov – branch of JSC “Tupolev” – will build two Tu-214SR aircraft in accordance with a state contract, a source in the aviation industry informed. More information follows in the link below: 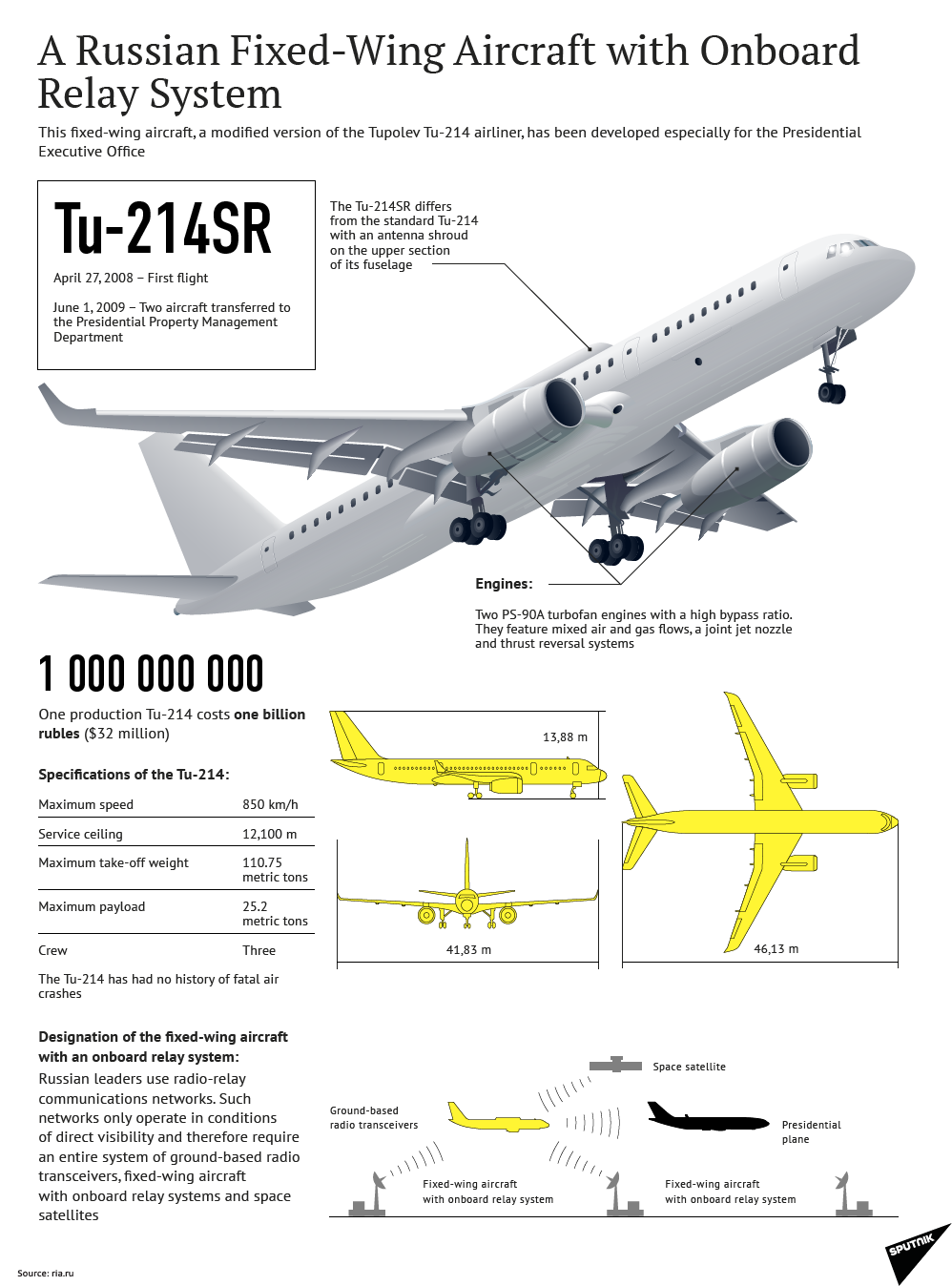 This fixed-wing aircraft, a modified version of the Tupolev Tu-214 airliner, has been developed especially for the Presidential Executive Office.

Tupolev Tu-214SR, a modified version of the Tu-214, is the Russian so called 'Doomsday Plane.' Outfitted with a state-of-the-art multi-intelligence payload, it was designed to provide the Russian leadership with a mobile command and control center in case of a major cataclysm or a global war.

"In the near future the first purchase order are deeply modernized aircraft Tu-204 - a batch of three Tu-204SM," - a spokesman said.

He clarified that the customer is special flight detachment "Russia".

"Production of the first production batch of Tu-204SM at the Ulyanovsk aircraft plant will not meet difficulties, as the aircraft will be built from the existing production backlog. It is expected that the order will be implemented aircraft factory in 2016," - said the source.
Tu-204SM is a modernized and the latest version of the basic Tu-204-100. Tu-204SM installed PS-90A2 differs from the basic PS-90A higher rates of lifetime and reliability. Tu-204SM is also installed a new on-board equipment, assemblies and systems, reduced the number of crew members.

4th Tu-214SR made its first flight

Judging from published photographs, at least one of the two available business jet Dassault Falcon 7X has withdrawn from the presidential fleet squadron.

Two Tu-214PU built by order for the Russian President Administration

The aircraft, which has the registration number RA-64527, made by order of the Office of Presidential Affairs of the Russian Federation at the Kazan Aviation Production Association. SP Gorbunova and made its first flight in June this year. 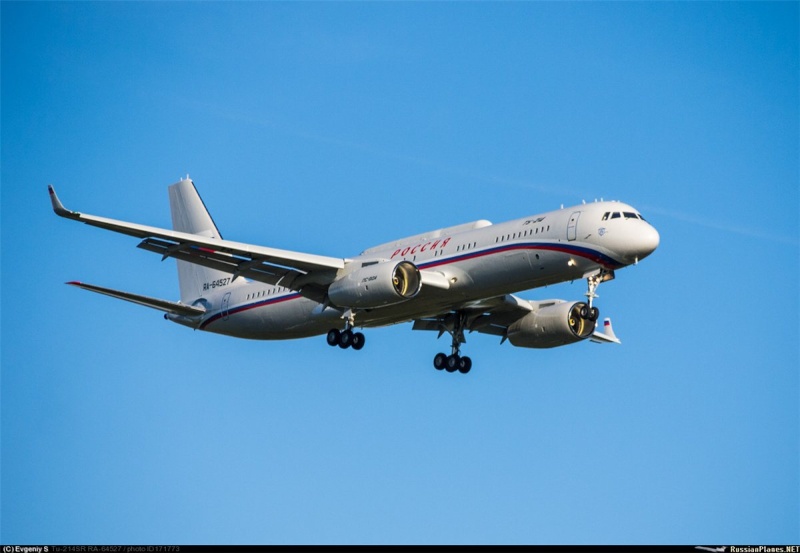 Now AO "Russian" in its composition has 13 Tu-214 of different modifications:

A Russian Ilyushin Il-96-300 wide-body passenger aircraft has been seen fitted with a system to protect against man-portable air defence systems (MANPADS) for the first time.

Registered as RA-96022, the aircraft is operated as a VIP transport by Russia's Special Air Group (SLO Rossiya) and was photographed in April. It is the newest Il-96 and first flew on 23 November 2015.

It now has four packages mounted beneath its fuselage, two at the front and two at the rear, each comprising two warning sensors (one forward- and one aft-looking) and one directed infrared countermeasure (DIRCM) head.

The front and rear packages differ, with the latter having square windows, which may suggest they are L140 Otklik laser warning devices. The windows in the front blocks are round, probably for L370-2 ultraviolet warning sensors. The DIRCM jammer is most likely the LSZ100-1, meaning that the entire system is the LSZ100. LSZ stands for lazernaya sistema zashchity (laser defence system).

Components of the system, including the LSZ100-1 jammer and L370-2 missile warning sensors, were displayed during the MAKS air show in August 2015.

The system was designed by NII Ekran to protect large military and commercial aircraft against MANPADS attacks. It is a derivative of the L370 Vitebsk system that is commonly used in various configurations on new Russian military helicopters and is now being exported under the name President-S.

The prototype of the LSZ100 system was tested during 2012-2013 on the Tu-214 RA-64505 that is also operated by SLO Rossiya. That version featured only two packages under the rear of the fuselage, each comprising two warning sensors and one jammer of a slightly different shape than those currently installed on the Il-96-300.

It is known that the Tupolev Company placed an order in June 2015 for two LSZ100 systems, which were to be delivered to the Kazan plant in March and October 2016, presumably for Tu-214 airliners. 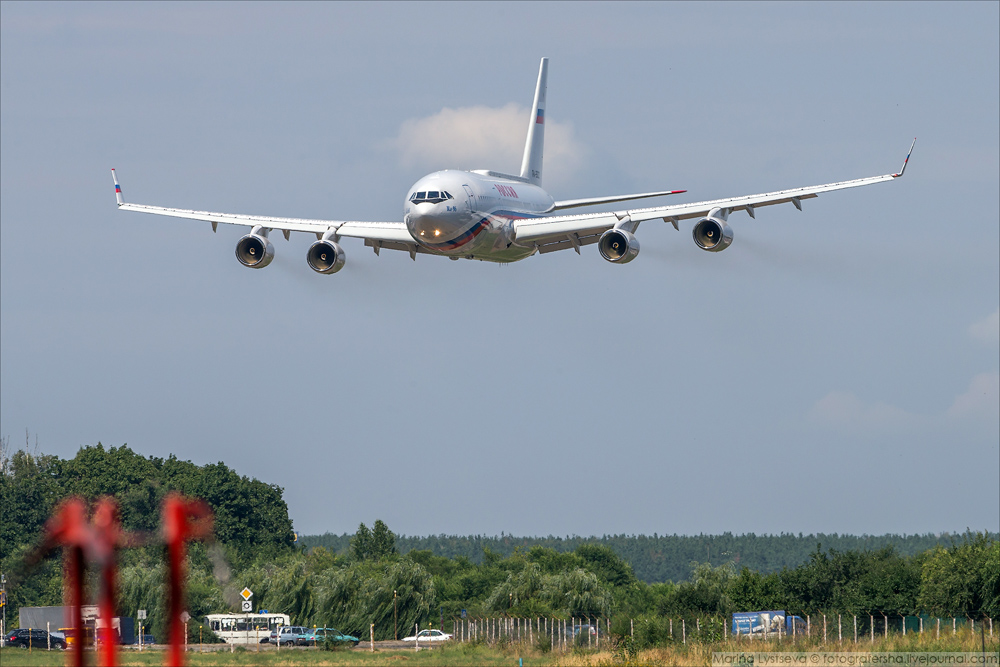 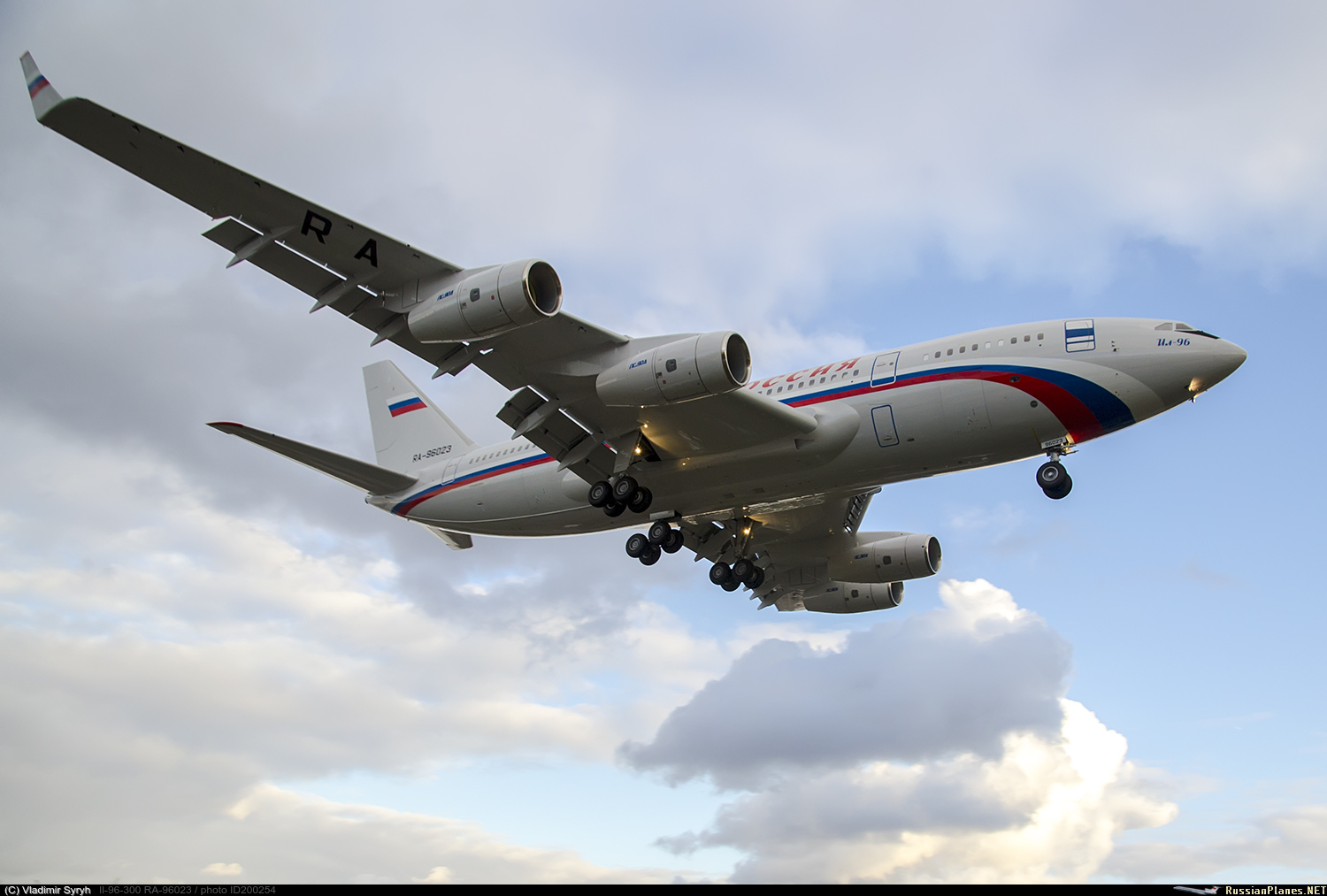 I guess they are buying so many Il-96 only to support VASO. How many are there in the presidential fleet, I guess around 6. When 3 would be more than enough for the long haul needs of the president and the VVIP.
franco

Apparently this makes 10, plus there are reportedly plans for the Air Force to acquire up to 12 for various purposes (still trying to track that down, know of 3 for sure)

Svyatoslavich wrote:.....
I guess they are buying so many Il-96 only to support VASO. How many are there in the presidential fleet, I guess around 6. When 3 would be more than enough for the long haul needs of the president and the VVIP.

They can always pass them off to Military. Lord knows they need replacements for those early Soviet jetliners.

In the disclosure of corporate information published on the server on March 1, 2017, the decisions of the Board of Directors (Supervisory Board) of PJSC United Aircraft Corporation (UAC) contain information on the approval of contracts between the UAC and the State Corporation Rostec for the supply of three Tu-214 aircraft with factory aircraft numbers 44811031, 44912032 and 44912033 (information of colleague Alexey).

The purpose of these aircraft is not specified. According to the known data, all three Tu-214 aircraft with the specified factory numbers are at the Kazan Aviation Plant (the branch of PJSC "Tupolev") in the initial stage of construction. According to the information of the russianplanes.net web resource, the first two aircraft with the serial numbers 44811031 (serial number 531) and 44912032 (serial number 532) are built in the variant of the Tu-214PU-SBUS control points, which leads to the conclusion that all three ordered GCs "Rostec" Tu-214 aircraft, apparently designed for the Special Flight Team (SLO) "Russia" Office of the President of the Russian Federation.

Until now, the "Russia" SLO has either to receive in the near future four Tu-204 and 14 Tu-214 aircraft of various modifications (including two Tu-214PUs delivered in 2010).

The confirmation of the fact that three Tu-214 aircraft ordered by Rostekh Group are destined for the Rossiya SNF are the statements of the Board of Directors (Supervisory Board) of the UAC of the contracts with Rostec Holding on the supply of two more Aircraft - special purpose aircraft Il-96-300PU (M1) with factory numbers 03024 (actually 74393203024) and 03025 (actually 74393203025). About the construction of these two aircraft at the PJSC "Voronezh Joint-Stock Aircraft Building Society" (VASO) for the "Russia" SLO, our blog has already reported.