ARCHANGELSK and SEVERSTAL waiting for disposal. 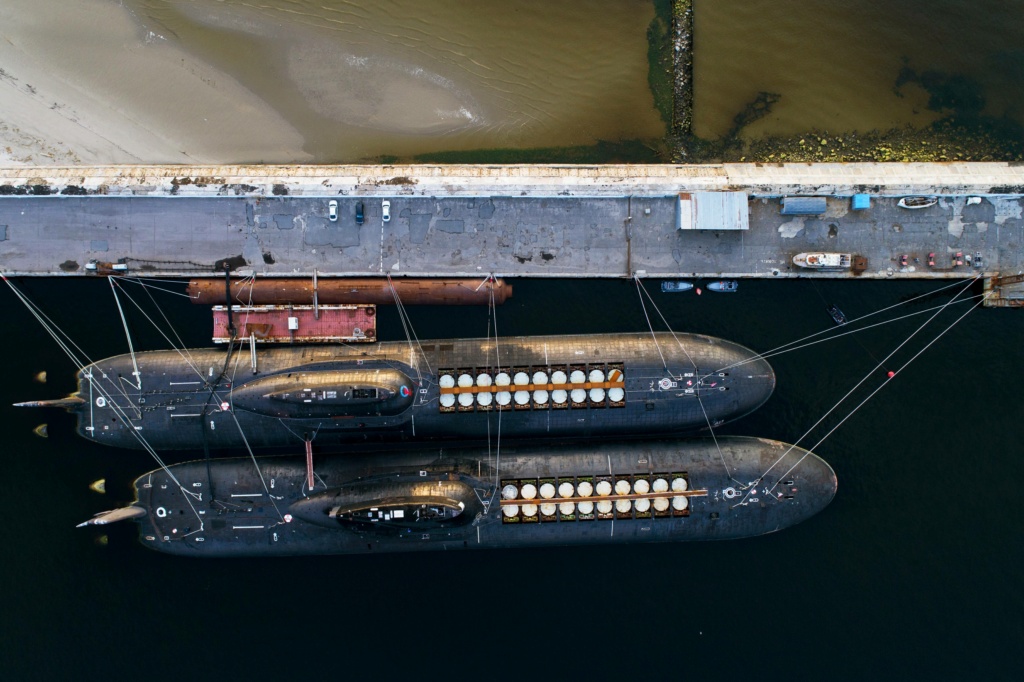 
Source: the world's largest nuclear submarine "Dmitry Donskoy" was withdrawn from the Navy

He recalled that the name " Dmitry Donskoy " had already been given to another strategic nuclear submarine of the Borey-A class (Project 955A), which was laid down at Sevmash last year .

The nuclear submarine "Dmitry Donskoy" (project 941 UM "Akula", according to NATO classification SSBN Typhoon) entered the fleet in 1980 and was the lead boat of the project. In total, six submarines were built under this project.

In 2002, "Dmitry Donskoy" was modernized and re-equipped with the "Bulava" for testing this missile before being put into service. It is still the largest submarine in the world in terms of displacement - 48 thousand tons.

Good. Boreis are newer, stealthier and better. And probably cheaper to maintain.

Οne of the great achievements of Soviet Navy

I'd like to think that one could be saved as a museum boat. Not cheap to implement, but Russia is swimming in cash currently, and it would be a shame to deny future generations the opportunity to see the largest sub ever built. It's a true testimony to Russian (*) engineering prowess and sign of what is possible in the future (a nation that can build this mighty behemoth can do anything it puts its efforts to).

(*) Yeah, I know its technically a Soviet achievement, but the degenerate Ukrop have dropped the ball and these days struggle to make washing machines...

^ Ppl from around the world would come to see it

They said last year that it would be saved as a museum boat. This is criminal. How in the f*** could you scrap all of them?

USS Theodore Roosevelt which was from 1981 costed $4.5bn in todays dollars. Wikipedia doesn’t have any cost estimates for Typhoon class. The Ohio-class US navy submarine built at same time cost about $3bn each in todays dollars. But displaced 18k tonnes vs 40k for the typhoon

I think we can deduce that the Typhoons cost as much as supercarriers. So when someone says the USSR couldn't afford super carriers , they are talking shit.

Sure. Supercarriers cost more to operate. But still. These were super subs.

Backman wrote:^ Ppl from around the world would come to see it

They said last year that it would be saved as a museum boat. This is criminal. How in the f*** could you scrap all of them?

Boreis are better boats and cheaper to operate and, now, that they are getting them in numbers, there's no reason to keep these in service. Better to retrain their crews on new subs.
GarryB

The Russians have some amazing military parks... imagine a naval park with retired submarines sitting side by side on the ground... all the secret and sensitive stuff removed of course and where practical replaced with inert dummies to fool western intel of course...

In a few years they will only be able to do it digitally but then you could visit from anywhere on earth if that were the case... you could make it a video game where you can pick up weapons and take them to digital shooting ranges to test fire.... have the subs in dry dock that can be filled with water and go for a sail if you want...

Games like Il-2 Shturmovich already have damn good computer models of armoured vehicles.... you could have online manuals and go through the process of changing or repairing a track for real, or take any Soviet or Russian tank from the very first to the most recent planned models out for a drive... with or without live targets...

There was that American game to recruit new soldiers, this could be a broader more historical system going back centuries with the different uniforms and equipment and weapons.
LMFS

Information about the withdrawal from the combat strength of the Russian fleet project 941UM "Shark" missile submarine "Dmitry Donskoy" is not true. This was reported by several sources in the shipbuilding industry and power structures of the North.

The information about the decommissioning of the last "Shark" was denied. As reported, no one wrote off the missile carrier, it is currently on the high seas, where it performs combat training tasks. The decision on its future fate will be made no earlier than December of this year, when the technical condition of the nuclear submarine and the stock of nuclear fuel will be checked. At the same time, it is not excluded that the service life of "Dmitry Donskoy" will be extended for another 4-5 years.

Regular reports about the withdrawal of "Dmitry Donskoy" from the Russian Navy do not correspond to reality. The ship is currently performing combat training missions at sea, participating in combat training activities. He will remain in combat formation until at least the end of the year.

- leads TASS words from one of the sources.

Earlier, a number of media reported unofficial information that the "Dmitry Donskoy" was taken out of service and will soon be disposed of. They began to talk about the decommissioning of the submarine for a long time, last year it was reported that after the laying of two new submarines of the Borey-A project, one of which will be named Dmitry Donskoy, the last Shark will remain just a numbered submarine TK-208 and will be used for weapons testing.

The TK-208 Dmitry Donskoy, a heavy nuclear-powered strategic missile submarine, is the lead in a series of six Project 941 Akula submarines. Laid down at Sevmash on June 17, 1976, launched on September 23, 1980, commissioned on December 29, 1981. In 2002, he underwent modernization, after which he took part in the tests of the Bulava missile.

For clarity for the non Russian speakers the Russian Navy call what the west calls the Typhoon class Akula... which means Shark in Russian.

The sub seems to be rather useful for testing new equipment and systems on it because of the space available... I wonder if they might use it to test their new ballistic hypersonic anti carrier missile... it would be an interesting platform for that... especially if the use of the weapon is expanded to other duties because of its use presumably of a guided terminal warhead of conventional design... targets like carriers, but equally port facilities and even canal facilities or nuclear power stations or hydro electric dam structures or the underground bunkers in the Pentagon or other locations where its high speed would give it the reach that other weapons might lack.