GarryB wrote: with the accuracy of a dive bomber with a gun vertically attacking the thin top armour of a vehicle... it would be interesting with the S-60 type 57mm high velocity gun firing APFSDS rounds... not much would be safe...

You are forgetting APHE, only one or two needed.
Kiko

Putin: the Russian army is armed with more than 2 thousand drones.

SOCHI, November 2 - RIA Novosti. The Russian military has learned to repel attacks from unmanned aerial vehicles, President Vladimir Putin said at a meeting with representatives of the Armed Forces and the defense industry complex, which is taking place in Sochi.

He noted that unmanned aircraft have proven themselves well in armed conflicts.

"We know very well <...> how effective and how dangerous it can be for us, bearing in mind what we observed in Syria - terrorist attacks using unmanned aerial vehicles. We have learned to repel these attacks and are doing (this. - Approx. ed.) is quite effective, "the head of state said.

He noted that more than two thousand UAVs are now in service with the Russian army, and urged to continue working on such devices, including using artificial intelligence, the most modern achievements of technology and science.

"And, of course, bearing in mind the experience that we ourselves have when using these aircraft," the president concluded.

In April, it was reported that Russian units used several dozen Lancet-3 kamikaze unmanned aerial vehicles to strike international terrorists in Syria, which allow them to deliver high-precision strikes. In addition, since 2019, other "kamikaze drones" - "Cube" have been used in Syria.

Unmanned aerial vehicles of the helicopter type of the Technodinamika holding were used to simulate an air raid of a conditional enemy during the Russian-Serbian exercises "Slavic Shield-2021". Drones served as targets for anti-aircraft missile and gun complexes "Pantsir-S" and were used for the first time in the exercises...

It's ugly.  But it only needs to simulate an adversary force. If it does that well then purpose served.

Kamov had lots of remote helicopter based drones... wonder what happened to them...

Some of them looked rather good.
franco

MOSCOW, November 3. / TASS /. Development work (ROC) on the creation of a reconnaissance and attack helicopter-type drone under the code "Termit" will be completed by the end of 2021. The head of the special design bureau of the Strela Scientific and Production Enterprise (NPP) (part of the Kronstadt company) Boris Trunov told about this to the RT TV channel .

"In terms of practical firing of unguided and corrected aircraft missiles, our helicopter-type unmanned aerial vehicle is the first and only product in its class in Russia. At present, it is an experimental model designed to test the correctness of the adopted technical solutions for the installation and placement of aircraft on UAVs. defeat, but in 2021 we plan to complete the ROC, "Trunov said.

According to him, the delivery of the first samples to the troops is scheduled for 2022.

"We work with Kalashnikov in cooperation, we carry out practical shooting. If we talk about the key elements of the UAV, then almost all of them are manufactured at Strela, including such equipment as the weapons control system and observation and sighting station," added Trunov ...

He noted that the main advantage of "Termit" is its off-airfield capabilities and operation from unprepared sites in engineering terms: autonomous vehicles are capable of taking off and landing almost everywhere. Such devices have the ability to hover over objects. The drone is equipped with a surveillance and sighting station, a weapon control system, missiles with a laser homing head of 80 mm caliber. The Termit can track and lock the target autonomously, the operator only makes a decision about the defeat.

During the Army-2021 International Military-Technical Forum, the RF Ministry of Defense signed a state contract with the Strela Research and Production Enterprise for the supply of complexes with Platform and Termit helicopter-type drones.

Finally tracked down a picture of the new UAV "Termite" but none yet of the "Platform". 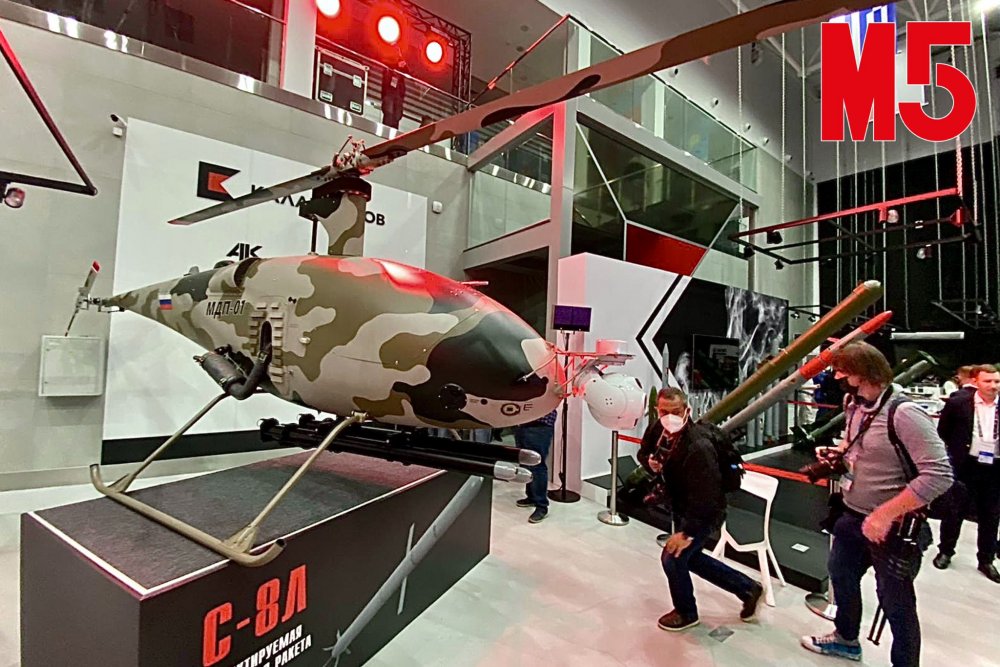 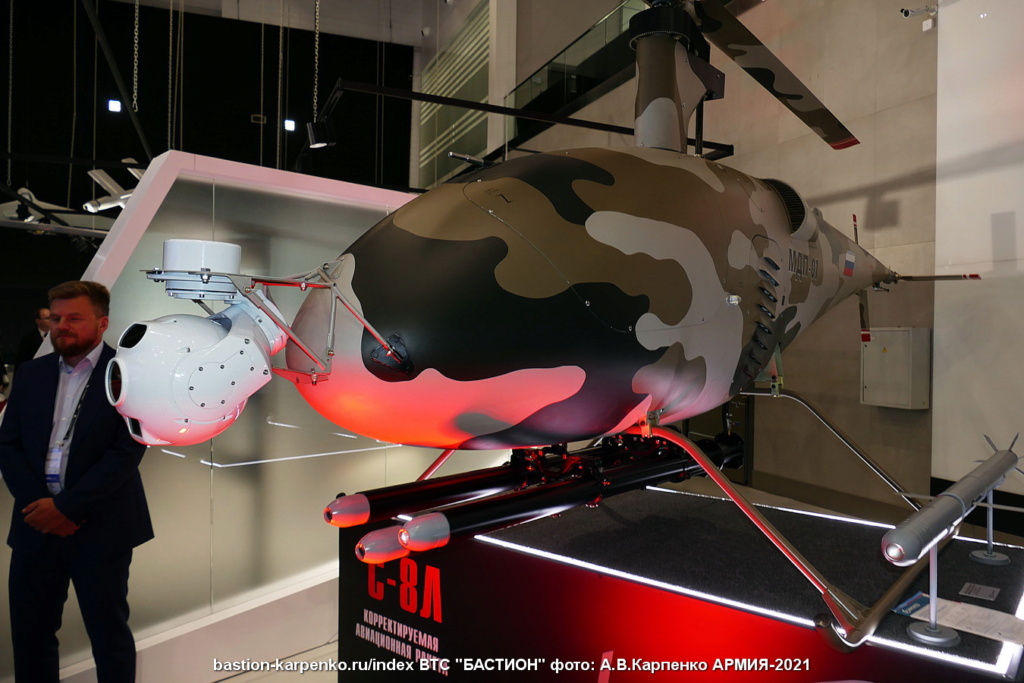 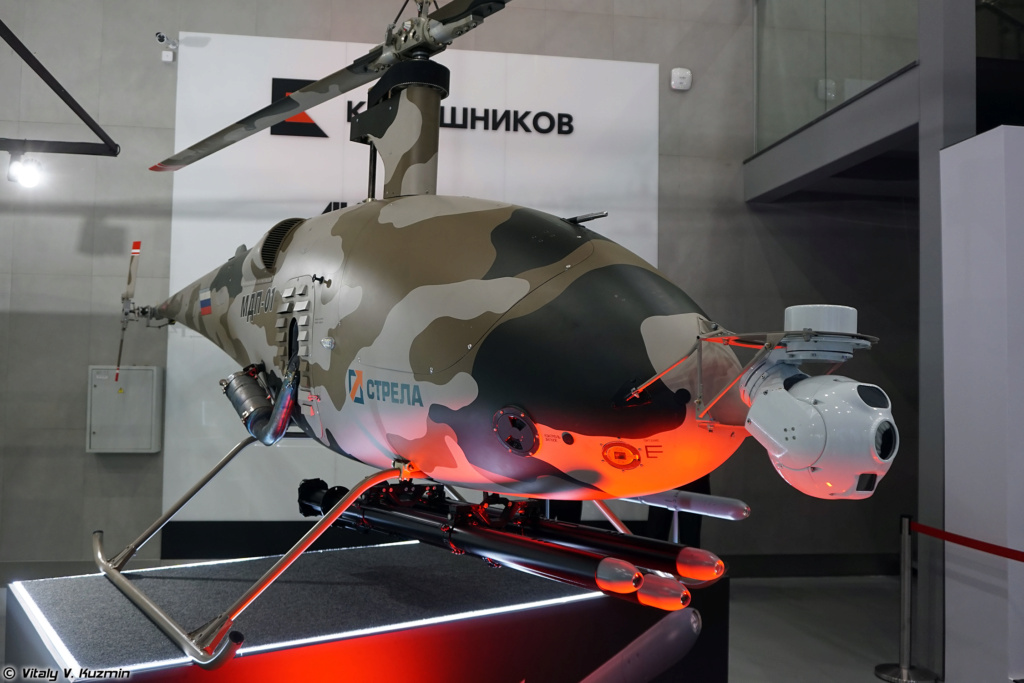 MOSCOW, November 5. /TASS/. Researchers of the Russian Federal Nuclear Center — Zababakhin All-Russian Research Institute of Technical Physics have patented a smart projectile-drone hybrid, according to a patent obtained by TASS.

According to the patent, the projectile will feature increased horizontal maneuverability due to an additional set of wings.

The projectile will be launched from a catapult. In the original configuration, the additional set of wings is stowed inside the aircraft’s hull, but will slide out if needed.


Edit: other sources have the image of patent, with a better explanation such as flying in slow speeds to be hugging the ground, than homes on target with increased speed by dropping wings and the fact that its launched from a cannon, curious about the size sounds like an interesting and even more interesting that a freaken nuclear center designed it.

thegopnik wrote: ...that a freaken nuclear center designed it.

I do not think that the basic institute of the Russian nuclear program should be called the term "freaken". as for the rest, nuclear research centers have the most powerful computing potential - for example, a supercomputer with a capacity of more than 1 exaflops is located at the Research Institute of Experimental Physics, so it is not surprising that developments related to the need for modeling and calculations of large amounts of data are underway there. The development at the Research Institute of Experimental Physics of such a UAV can mean only one thing: the Ministry of Defense of the Russian Federation has given the task to develop just such a UAV to increase the tactical capabilities of units in which armored vehicles are used.
Autodestruct

"At the Dubai Airshow 2021 in the United Arab Emirates, Kronstadt will present a new automated workplace (AWS) of the operator to control the group actions of complexes with unmanned aerial vehicles, the press service of the company reported.

According to him, the new system will allow the operator instead of direct control of drones to perform only the upper goal-setting. The main operations related to flight control, systems control, the solution of the target task, the interaction between the sides within the UAV group will be performed by a computer using elements of artificial intelligence."

The satellite communication system developed for the Orion-E drone can be installed in drones of other producers, CEO of the Russian drone developer Kronshtadt Sergei Bogatikov stressed

"Development of the Orion-E [drone - TASS] with the satellite communication system is implemented in cooperation with domestic developers. The system with the satellite communication link is expected to get the Code "O" [assigned at the design documents revision stage according to results of the pilot lot production and preliminary tests - TASS] in 2022," the top manager said.

It will be possible to install the satellite communication system developed for the Orion-E not merely for Kronshtadt drones but it can also be offered to other heavy class unmanned aerial vehicle (UAV) manufacturers as a component, Bogatikov noted.

Non-line-of-sight communications make possible to significantly increase the effective controlled operating range of the drone and ‘decouple’ takeoff and landing airfields. "The operating range without satellite communications is limited by the line of sight and is not above 250-300 km," the chief executive added.

Satellite communication has not been initially anticipated when preparing terms of reference for the drone, the top manager said. "For the purpose of broadening the range of tackled mission and functioning areas of the system and increasing export capabilities of the Orion-E, Kronshtadt Company arrived at a conclusion on the need to outfit the UAV system with such solution," Bogatikov added. 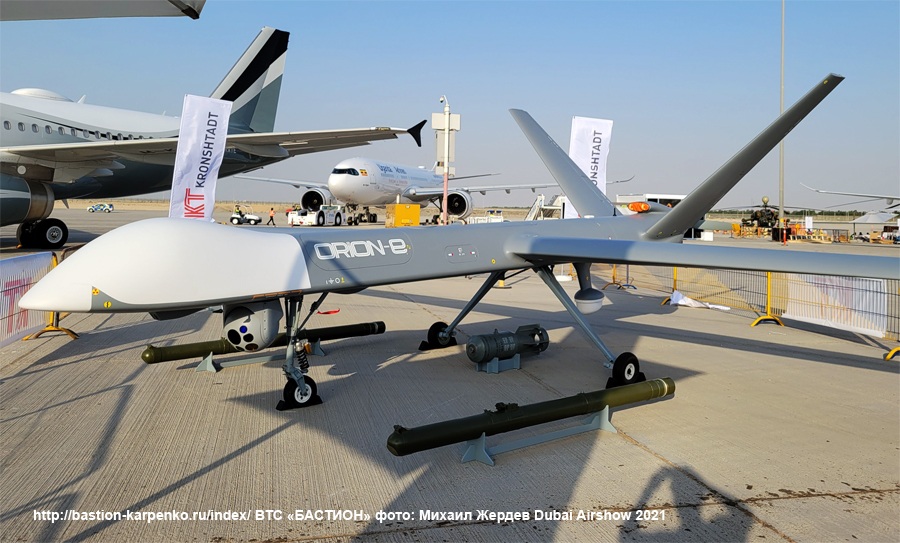 Interesting little bulge there on the back of the Super Jet 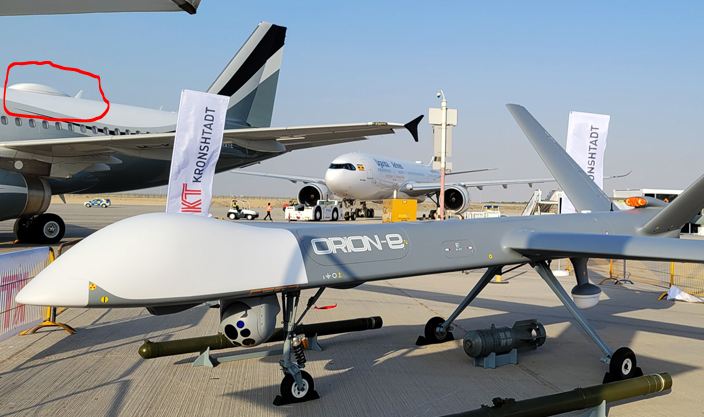 They store beer there to keep it cold.
Carry on, carry on, nothing to see there!

Somehow connected to the Presidential car - or a private jet for Aurus? 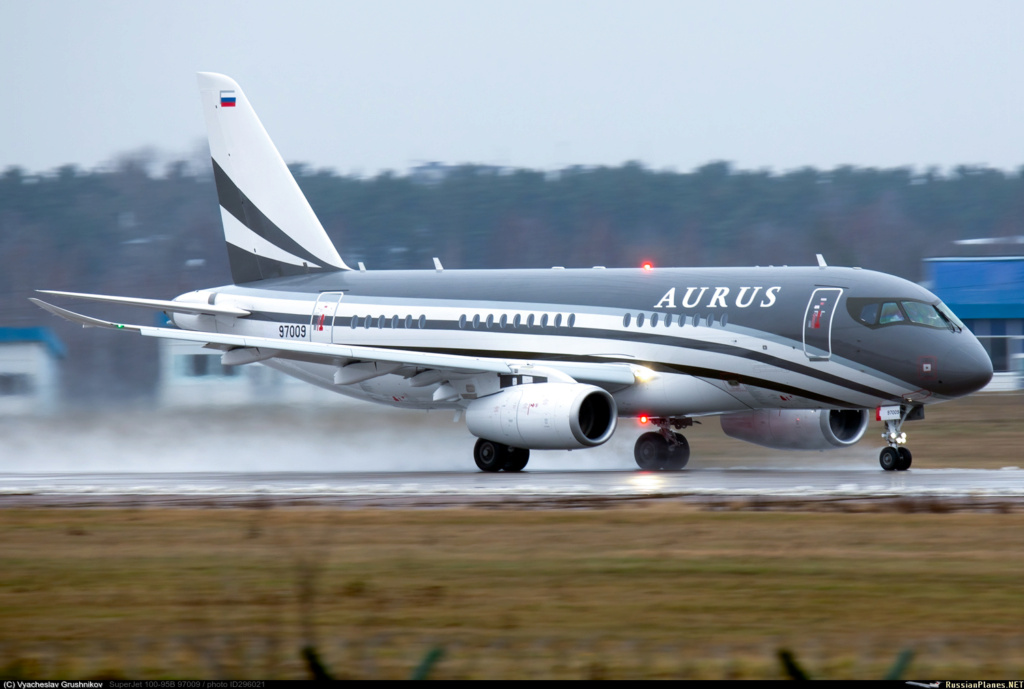 They have Ansat with similar markings&luxury interiors, so I guess they are combining luxury at all fronts.

"We are carrying out several works on actions of groups and swarms of drones of different classes with elements of artificial intelligence, emphasizing their autonomy, intelligence and informational competence, which gives these drones the ability to make correct decisions autonomously," he said.

"In this case, the operator, instead of assigning tasks to specific drones, will assign only those tasks that must be fulfilled in this or that region. The group or swarm will distribute the functions by itself and determine the priority of each task. This concerns both offensive and reconnaissance missions. It means to say that drones will detect, classify and attack targets autonomously," explained the Kronstadt director.

Still according to Bogatikov, the company is studying the creation of groups of reconnaissance and attack drones, which would act together with robotic systems deployed on land and at sea, complementing each other.

The only thing missing by now is a launch vehicle.
Isos

Hole wrote:The only thing missing by now is a launch vehicle.

Military vehicles...that's not something they miss in Russia.

MOSCOW, November 5. /TASS/. Researchers of the Russian Federal Nuclear Center — Zababakhin All-Russian Research Institute of Technical Physics have patented a smart projectile-drone hybrid, according to a patent obtained by TASS.

According to the patent, the projectile will feature increased horizontal maneuverability due to an additional set of wings.

The projectile will be launched from a catapult. In the original configuration, the additional set of wings is stowed inside the aircraft’s hull, but will slide out if needed.


Edit: other sources have the image of patent, with a better explanation such as flying in slow speeds to be hugging the ground, than homes on target with increased speed by dropping wings and the fact that its launched from a cannon, curious about the size sounds like an interesting and even more interesting that a freaken nuclear center designed it.

Fucking brilliant idea. Could actually be much more effective than conventional top attack or standard atgms and RPGs. Very nice.

The combination of direct fire with deployable wings if loitering is needed seems rather interesting...
Hole

Hole wrote:The only thing missing by now is a launch vehicle.

Military vehicles...that's not something they miss in Russia.

I expect something that looks like the ISDM mine layer but launching modified Lancet drones.

Mir wrote:Interesting little bulge there on the back of the Super Jet

This is SATCOM antenna.

It was just interesting to me in that until very recently the said Super Jet had no such antenna.
Hole