The-thing-next-door wrote:
I wonder, I have heard some people referring to hexal as a high explosive incendiary compound. Would a large scale bombing by Russian bombers be able to replicate what we saw in Dresden and Tokyo back in WWII?

In the unlikely event of a war in Europe firestorms as seen in Hamburg, Dresden and many Japanese cities like Tokyo are no longer likely as the combustible materials (middle ages old towns made of wood) are no longer there in such vast quantities. Now are there enough delivery aircraft capable of spreading thousands of small bombs and incendiaries over large areas, fewer bigger bombs don't create the same effect.

If it did happen then the weapon would be a nuke or two which is a whole different ballgame.
GarryB

Is that designation official?

I would think ODAB-11000 would be more accurate as it is supposed to be 11 tons with an explosive content of about 44 tons of HE. (Which is perfectly normal for thermobaric weapons that use free oxygen around the target so it would be 11 tons of fuel as opposed to a standard bomb which is one quarter fuel and three quarters oxidiser generating large amounts of oxygen for the fuel to burn...)

I read it somewhere (Gordon, Butowski?). Propably not much official. But better then FOAB.

ODAB-9000 and the FOAB are completely different weapons. ODAB-9000 is the thermobaric modification of FAB-9000 from the beginning of the Cold War.

ODAB-9000 and the FOAB are completely different weapons. ODAB-9000 is the thermobaric modification of FAB-9000 from the beginning of the Cold War.

That is what I was thinking.

They showed photos of their strategic aircraft with weapon loads... maybe they might do the same for the new Tu-160M2s and show their conventional weapon range... I would think it would be rather outstanding...
owais.usmani

haha love the car alarms in the end. with monstrous machines like that you feel it in your chest! incredible power.
owais.usmani


Moscow. February 16. INTERFAX - The Ministry of Defense of the Russian Federation has filed a claim with the Moscow Arbitration Court to recover 5.5 billion rubles from PJSC Tupolev for violating the deadline for the execution of work under the state contract dated December 26, 2016, according to the report of Tupolev for the fourth quarter of 2020.
The lawsuit went to court on December 10, 2020, a preliminary hearing is scheduled for March 4. The case will most likely be heard behind closed doors.
Details on the website of the Moscow Arbitration Court have not been published.
According to the document, the developer is charged with violation of the deadlines for the implementation of the component part of the experimental design work (ROC) under the code "70M 506". Probably, here we are talking about pairing a new missile (ed. 506) and a deeply modernized strategic missile carrier-bomber Tu-160M ​​(ed. 70M).
As Interfax reported, in May 2015, the President of the Russian Federation made a decision to resume production of the Tu-160 "White Swan" strategic missile-carrying bombers, which are the air component of the nuclear triad.
Aircraft in a new look - Tu-160M ​​- after a 10-year break will be built again at the Kazan aircraft plant (a branch of Tupolev, part of the UAC). The contract for the supply of the first batch of 10 vehicles worth 150 billion rubles was signed on January 25, 2018. In addition, it is planned that all 16 "strategists" in service with the Russian Defense Ministry will undergo deep modernization in the form of the Tu-160M.
A new missile is being developed for the new Tu-160M, as well as the deeply modernized Tu-95MSM and the promising long-range aviation complex (PAK DA). According to the information on the public procurement website, it is being created as part of the ROC under the code "product 506". At present, the strategic missile carriers Tu-160 and Tu-95MS are routinely equipped with modern cruise missiles Kh-101 (product 504) and Kh-102 (variant of a missile with a thermonuclear warhead).
In 2017, it became known about the ongoing development of an ultra-long-range missile for the Tu-160, Tu-95MS and PAK DA - the head of the State Research Institute of Aviation Systems (GosNIIAS) Yevgeny Fedosov said that the deeply modernized Tu-160M ​​would be armed with an Kh-BD cruise missile (long range). According to him, the range of this missile is classified, but it will significantly surpass its predecessor, the Kh-101 (according to the RF Ministry of Defense, up to 4.5 thousand km).
In March 2018, Yuri Borisov, being the Deputy Minister of Defense of the Russian Federation, told reporters that the missiles developed for the modernized "strategists" Tu-160 will surpass all existing models in range: "We are developing new aircraft weapons, and we cannot compare the Tu-160 aircraft with missiles Kh-55, Kh-550, even Kh-101 and the aircraft, which we hope to receive in series by the 2030s with new aircraft weapons that will have completely different ranges. "
Tu-160 is a supersonic strategic missile-carrier-bomber with variable sweep of the wing, developed at the Tupolev Design Bureau in the 1970s-1980s. It is designed to destroy the most important targets deep behind enemy lines with nuclear and conventional weapons. Able to carry 12 cruise missiles on board, all weapons are located inside the fuselage. In Russia, the Tu-160 for its grace is called the "White Swan", according to NATO codification - Blackjack (Blackjack).

They have mentioned extra long range cruise missiles... I wonder if they are working on new nuclear ramjets of smaller size for use on air launched missiles...
Isos

About tu-160 and some other stuff. At 25 minutes we can see tests of Mi-8 EW systems work against igla-S missiles.

Dang, I never realised how flat/blended the fuselage is, Tu-160 is basically a flying wing.

Yeah, they restarted production already and are expected to build 50 of them from scratch over next 20 years

First new one is already being assembled

That plane looks great from all angles. Never saw such detail from the rear.

The sound of Concorde on takeoff.
GarryB

It was a dry thrust take off too, which is interesting... it didn't seem to be a particularly long take off run...

The Tu-160s engines usually have a white glow in full AB which is rather impressive especially in low light conditions.

The Tu-22M3 has NK-25 engines whose AB is a fantastic bright blue colour that is amazing, but I am guessing the plan to fit the new Tu-22M3Ms with NK-32 engines of the Blackjack will mean they are white AB too...
mnztr

GarryB wrote:It was a dry thrust take off too, which is interesting... it didn't seem to be a particularly long take off run...

The Tu-160s engines usually have a white glow in full AB which is rather impressive especially in low light conditions.

The Tu-22M3 has NK-25 engines whose AB is a fantastic bright blue colour that is amazing, but I am guessing the plan to fit the new Tu-22M3Ms with NK-32 engines of the Blackjack will mean they are white AB too...

Probably low fuel short training flight. I estimate it can take about 120T of fuel so when it has 20T and no weapons, it probably floats off the runway like a leaf in the wind. When it was lining up for the takeoff I though the runway seemed kinda short vs other videos I have seen as well.

Still the prettiest angel of death....

BTW this is a modded old frame correct?
LMFS

Yes, as far as I know the first new build will be delivered this year.
PapaDragon

Still the prettiest angel of death....

BTW this is a modded old frame correct?

Flights of Tu-160 strategic bombers in the Saratov region

The first Tu-160M prototype was converted from a combat bomber with the serial number 4-05 and the name "Igor Sikorsky", which previously had the tail number "14" and the registration number RF-94103. 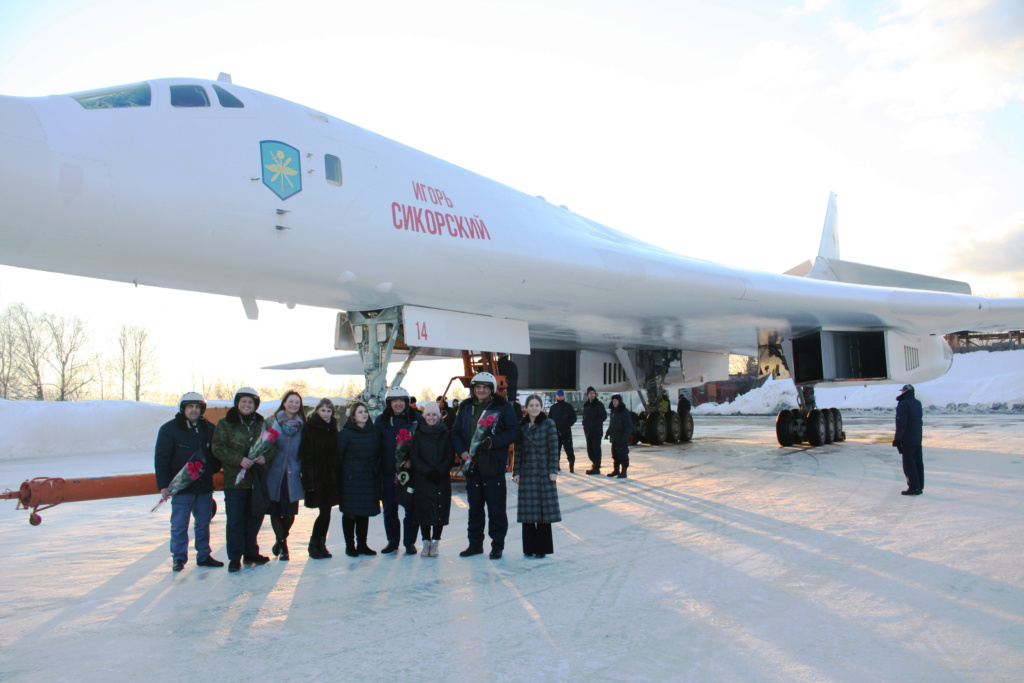 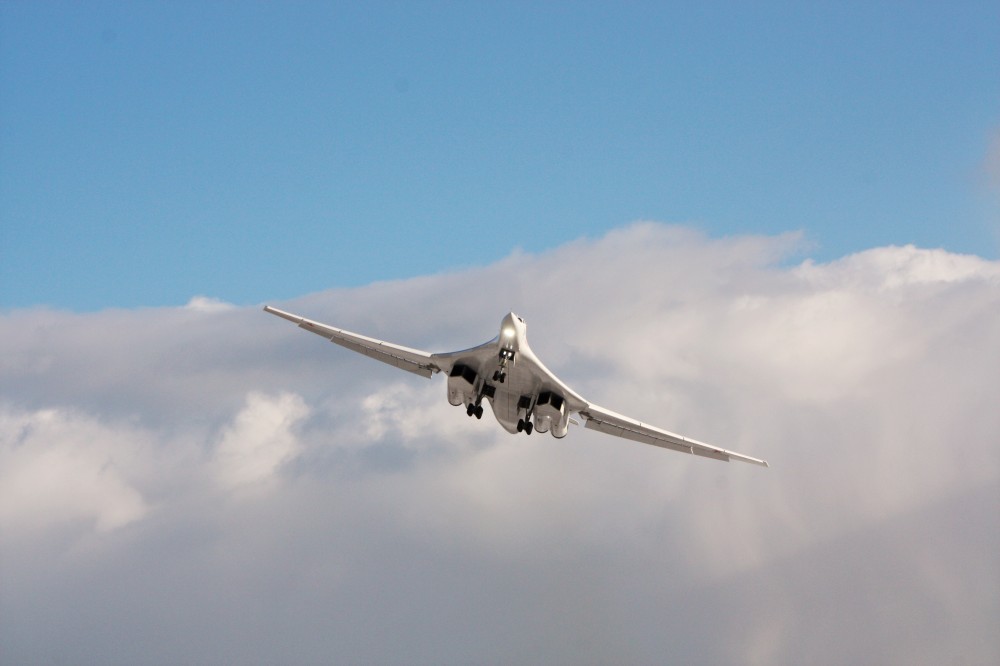 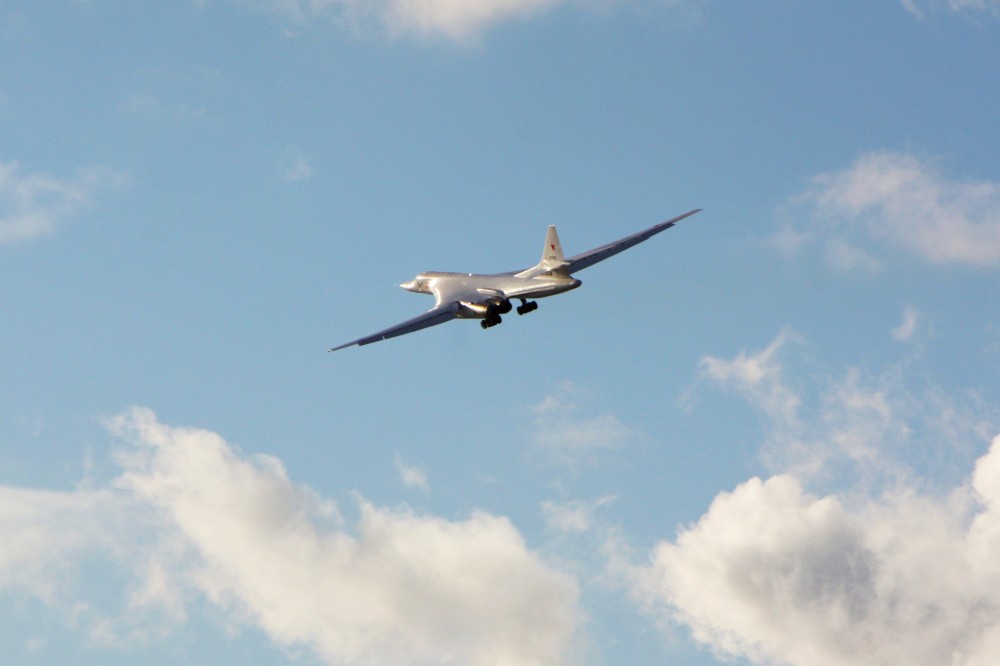 I came across an article that talks about the TU-160 M2 that will enter service in 2023.

Can we assume these will be the new build frames? They will allegedly have a stealth coating as well as some SU-57 avionics features.
Sponsored content