Btw in a parallele world Macron has a defence meeting with its staff. They will probably decide to condamn the offensive and provide moral support to kurds

Edit: if you have missed it, westerners talk now about "syrian army" rather than "iranian" or "hezbollah" or "regime forces". It's a way for them to recognize the ligimicy of Assad. Well their new problem now is how to change the history and make everyone forget that US send its allies to be killed unarmed by its other former allies supported by its ally ...

I wish the Altay or leopard tanks were deployed instead of the pattons. I want to see how well T-90As would fare against them. Some soviet ATGMs would be nice to see as well.
Cyberspec

The Turks have Leopards in Syria as well...although I think there probably won't be any major clashes between the SAA and the Turkish Army

Cyberspec wrote:The Turks have Leopards in Syria as well...although I think there probably won't be any major clashes between the SAA and the Turkish Army

Turks lets those terrorist drive their tanks. I wonder if there is any turkish soldier in Syria right now.

Leopard were blowing up since long ago from kornet hit. 2A4 has a very bad protection (according to War Thunder game

My suspicion is that Erdogan and Putin have a deal, but Russia may have to sternly remind Turkey of the realities on the ground as it did when the Turkish military tried to move into Khan Sheikhoun days before it was captured by the SAA.

They're about to enter Raqqa...the local council has already handed over control of the city
crod

LMAO - let no one ever doubt the Russians again.

now for the scramble to fight over the rebuild $$$ and who gets what, he better look no further than Moscow and Tehran for every ounce of cement and everything else besides.
Vann7

In military conflicts the TRuth is the first casualty... so be careful with fake news and intentional disinformation ,
or unintentional disinformation from all sides..  Last year almadar ,the website that everyone was using
as "Truth" was claiming Russia and SAudi arabia were allied fighting Iranian forces and their militias in Syria..
and this was not just any site.. but the one with more credentials for having many information from insiders
in Syrian army..

and just days ago.. another claim that Iran military was fighting Russian soldiers in Syria... the people who
do reports like that ,simply wants to split the Syrian+Ruso-IRAN  alliance in Syria.. and NATO for sure will like
to provoke a war between Turkey and Russia..  So the time is perfect for False Flags/provocation staged incidents ,filmed in cameras ,that will be show in Western media ,and Youtube .. where people with faces covered but using the uniforms of X or Y nation.. Remember that US military have some combat planes ,that copied /painted
to the colors used for Russian sukhoi and migs planes.. You could have a case of a cruise missile fired from Turkey territory.. from an F-16 targeting a russian base and later Turkey blamed for it ,by NATO or Israel..
or a warship attacked of Russia or a warship of turkey attacked and later the real authors of it.. blame the other side.. to provoke a war between Russia and Turkey..  Dick Cheney for example had a plan to sink one warship
of the US navy , near IRAN , to do it themselves and later blame IRAN for it..  we saw how some forces in Turkey assasinated the Russian ambassador and caught in camera.. they were seeking to provoke a major split in relations between Russia and Turkey..and Erdogan himself told exactly this.. So everyone needs to open their eyes more than ever now... because US,Israel ,UK and their intelligence agencies will be working over time ,to find ways ,how to provoke Russia and Turkey into a fight with each other..

There is a very famous case of the USS Liberty attack , a warship of US navy.. that was attacked by Unmarked planes.. (but that their model was very similar to the ones used by Israel airforce)  , the warship have a HUGE American flag and still was nearly sink by israel airforce with their flags removed.. and it was the present of a nearby Russian warship , what made the attack to stop.. Later when it was all revealed that Israel airforce indeed attacked and american warship.. it was later labeled as an "Accident". Reality is ,they wanted to sink the American warship , that was navigating eastern mediterranean sea.. and later blame it on Egypt.. and use the incident to pull the Americans into fight Egypt and justify an invasion..

So close attention have to be paid at the Israel and US actions in Syria , they will seek to break any kind of alliance /agreement that Russia and or Syria had with others.. also aware of fake news reports ,that will try to create divisions and provoke split in relations and weaken Russia and Syria.. position in Syria..

He basically said the Kurds picked the wrong team... if they had picked the Russians then everything would go by international law and everyone would be respected and they would basically find a peaceful and more painless solution that everyone is OK with even if they don't love it...

The US on the other hand has a long history of running away and leaving former allies hip deep in shit with the tide coming in.

Of course the Kurds didn't want to be on the same side as Assad... they actually thought they could beat him... and for a period actually were.
Cyberspec

There's obviously some backdoor deal between the Turks, Americans and Russians...otherwise these major developments of the past 24 hrs wouldn't happen so smoothly.

From what I've seen on the few videos that show Syrian soldiers entering various towns. they are only light forces with pick-ups and civilian trucks. If they happen to clash with the Turks, they'll be clobbered

There's a report that a FSA or NSA (as they call themselves these days) column was bombed after they crossed onto a non agreed area...

Within Syria
@WithinSyriaBlog
NSA fighters will be targeted by the Russian Aerospace Forces and the Syrian Air Force is they cross the pre-agreed upon line with Turkey.

The spearheads of the SAA advance into the NE seems to include bus loads of soldiers. Not like the US moving forward only in armoured vehicles

Erdogan today is at some Turkic speaking international conference so is probably grandstanding.

Worth putting here in full

These are the main points in the agreement between the #SDF and the Syrian government.

1/ The abolishment of the #SDF (Syrian Democratic Forces), with all the current Kurdish forces and military groups joining the 5th Corps (Assault Legion) under Russian control
3:12 AM - 14 Oct 2019

2/ A solid guarantee of full Kurdish rights in the new Syrian constitution with autonomy which will be agreed upon by Kurdish leadership & Syrian state.

4/ #Manbej & #Kobani were agreed upon for #SAA to enter quickly, whilst #Hasakeh has seen a wide scale deployment of Syrian troops, this will continue in #Qamishly and other joint areas

6/ Within one month Kurdish leadership with start to take up some official roles within the current Syrian government to ease the transition period of N. #Syria until an new constitution/government is formed in the future

7/ #Tabqa in #Raqqa was also on the agreement, Syrian forces entered the city and took control of the military airbase earlier today

8/ #Russia had brokered a similar deal a few days ago, yet it was rejected by #Damascus who wanted more concessions from the #SDF.

10/ The agreement between #SDF and Syrian gov is yet to be fully completed, the finer details will be fleshed out over the next four days.

12/ The agreement thus far is effectively a military one, based on self-defense and mutual interest with a number of set aims. The governance/land delegation/isis prisoners part will follow later 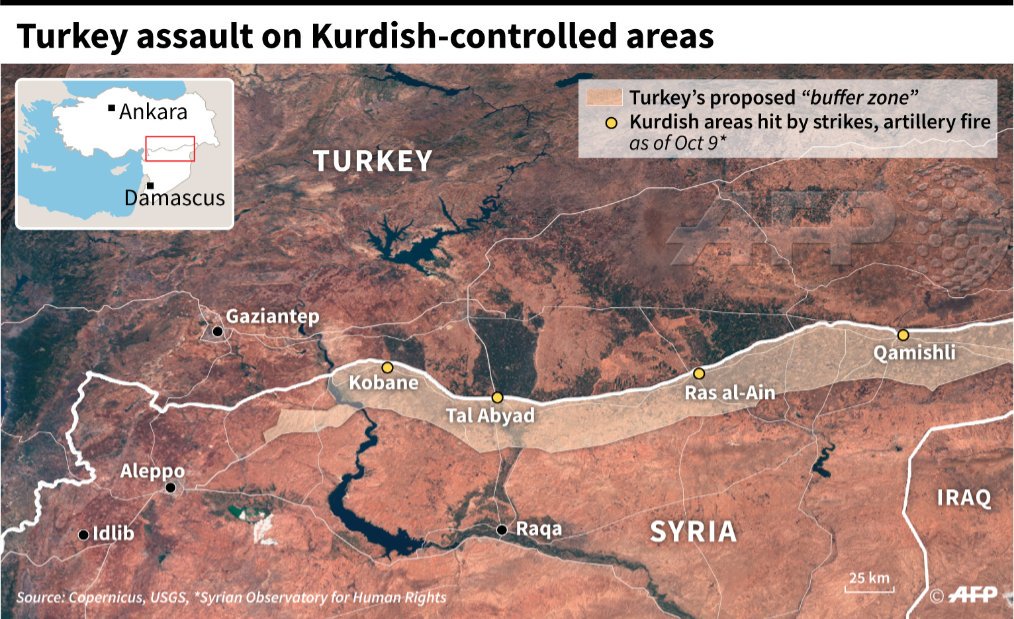 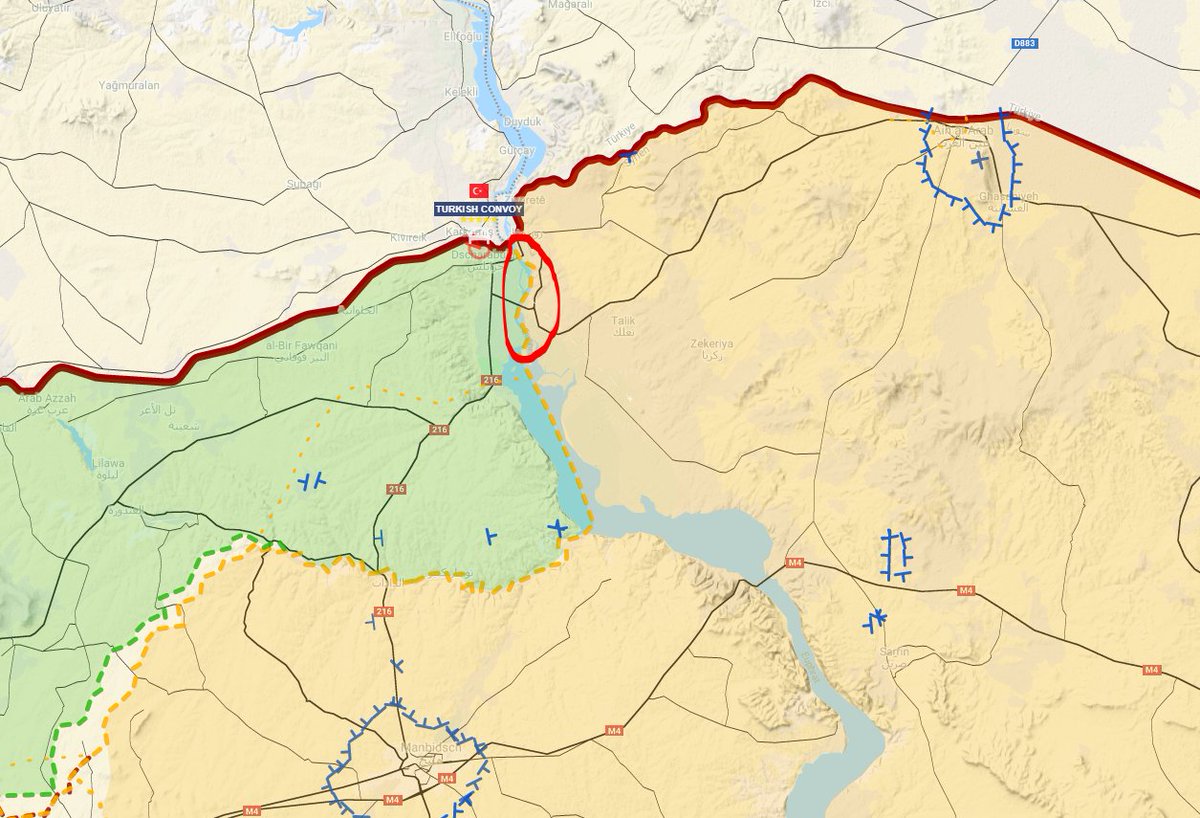 A race to safety and no doubt a race by the SAA to halt the Turks. 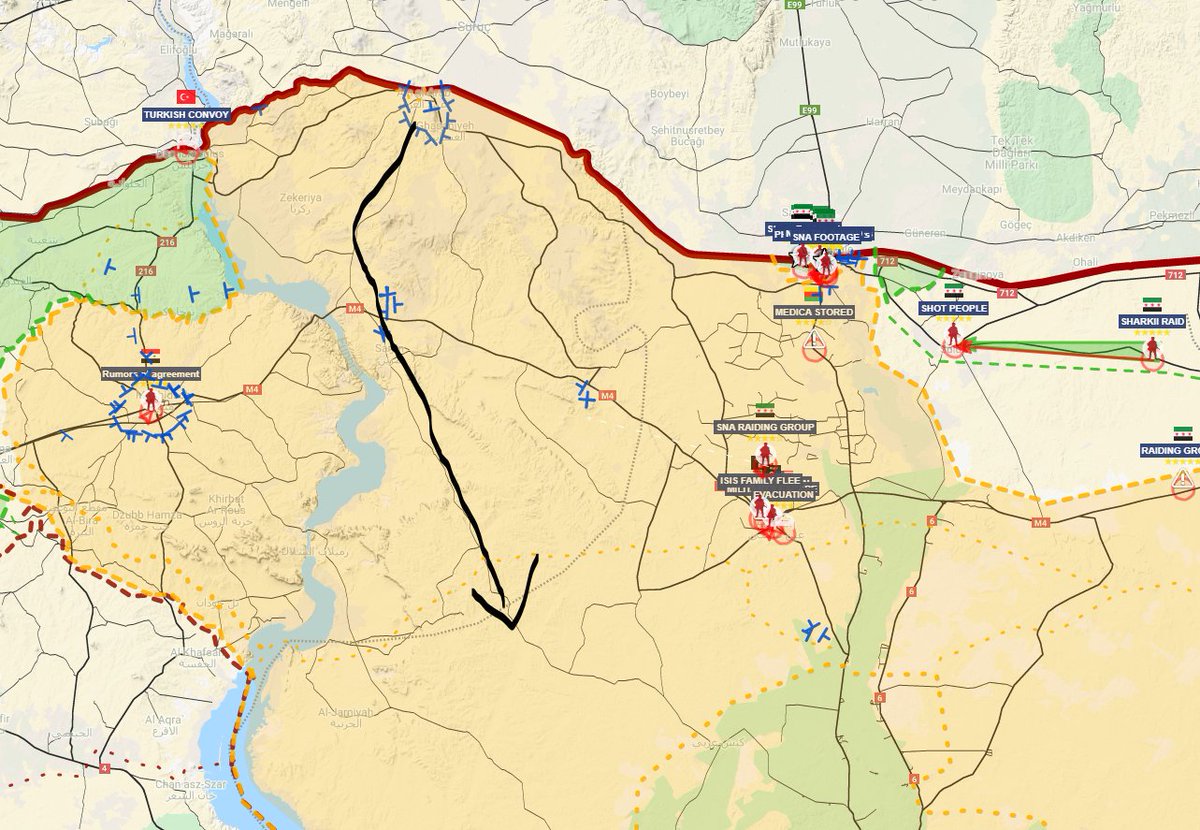 That Al-Tanf pocket seems to get bigger and bigger,

An agreement between #SAA and #SDF has been reached! Looks like SAA will enter Manbij tomorrow at the latest 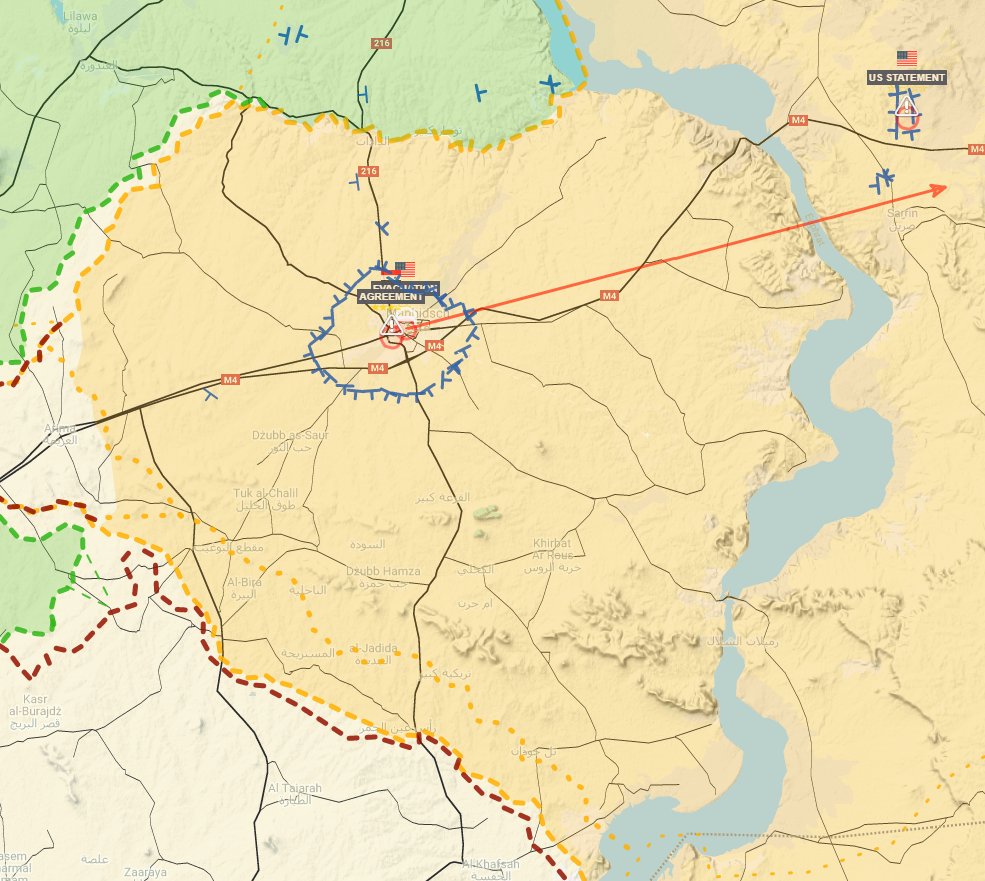 France says the only reason they are pulling out is because the US logistics train is going with the American withdrawal. Macron could talk to Putin and set up a new logistics chain if they are really worried about keeping Daesh under control. Siding with Russia is the only way you stay in this game.

Turkish backed militias are releasing all the ISIS people from jails. No one can stop that right now. They will go back to Europe and even in russia very fast. We talk about thousands of released. French had tens of operating soldiers out there. The main work was done by kurds.
miketheterrible

Isos wrote:Turkish backed militias are releasing all the ISIS people from jails. No one can stop that right now. They will go back to Europe and even in russia very fast. We talk about thousands of released. French had tens of operating soldiers out there. The main work was done by kurds.

Yeah, no. They wont make it to Russia regardless what you think. Hence why Russia strengthened its southern borders.
auslander

Isos wrote:Turkish backed militias are releasing all the ISIS people from jails. No one can stop that right now. They will go back to Europe and even in russia very fast. We talk about thousands of released. French had tens of operating soldiers out there. The main work was done by kurds.

Some kind of link or proof?

They can travel anywhere they want with fake i.d of dead civilians. They all look like the same. They have no difficulties going to europe, from there they can easily go to Russia. Germany is already full of former ISIS members.


Some kind of link or proof?

Babak Taghvaee
@BabakTaghvaee
·
3h
#BREAKING: I just received a report that #ISIL terrorists who defected Ain Issa prison have armed themselves & are now fighting against #SDF. They are trying to release remaining prisoners. Because they know #Assad will execute them all. Video from inside the prison this morning!