Isos wrote:They should focus on Orion drones for now. It is a much more needed drone than this one for their actual conflicts.

Better even, they do focus on both

Who says that long range interdiction would not be useful in the SMO? One Okhotnik sqd. on station over regions of Central and Western Ukraine would be much better against time critical target and deliver a much bigger payload to the targets than even Kalibr, together with the unique ability of retargeting and doing reconnaissance and SEAD at the same time. It would probably not be easy to detect it and much less track it, ukie radar stations would need to work overtime and give themselves away, besides the western AWACS would have a hard time getting them and warning targets / cueing AD against them. Armed with AAMs they could patrol around enemy air bases for much longer time and prevent UAVs and tactical planes from operating much more effectively than remote SAMs or fighters called on purpose. Against a severely degraded AD the stealth design would open many options which are currently not feasible and bring the use of air power to a new level in Ukraine, not to talk about the effect it would have in deterring or if needed actually visiting poles and other candidates to denazification across Europe...

Now all it needs is klevok-d2 for internal weapons for max kino.
LMFS

Serial production for Okhotnik getting closer:

NOVOSIBIRSK, May 27. /tass/. A new building for special painting of unmanned aerial vehicles will be built at the Novosibirsk Aircraft Factory named after Chkalov, where, as previously reported, it is planned to start production of stealth drones "Okhotnik". The design of the building will be ready in the spring of next year, Igor Bochkarev, Executive Director of SibproektNIIaviaprom JSC, which is engaged in the design of the building, told reporters.

"Now we plan to complete the work and come out with a positive conclusion of Glavgosexpertiza in the spring of next year. It is planned that about a year will be construction. This building is focused on painting the aircraft, then it goes to the flight test shop, and then goes to the military units, " Bochkarev said, adding that we are talking about the production of heavy drones.

He added that some areas of production at NAZ im. Chkalov will be reconstructed for assembly. As an employee of the Research Institute Sergey Kazachev told reporters, a paint chamber will be located in the new building. The dimensions of the workshop are about 150 m long and 40 m wide. The process of applying paint to such devices is technologically very complex, and, according to Kazachev, requires a special temperature regime and regulation of air flows.

Earlier, a government source told TASS that the plant will modernize production within five years with the construction of a new building for the production of S-70 Okhotnik heavy stealth unmanned aerial vehicles (UAVs). It was reported that modernization will begin in 2022, and the amount of investment will be about 2.5 billion rubles.

NAZ im. Chkalova was founded in 1931. During the Great Patriotic War, it produced more than 15 thousand Yak-7 and Yak-9 fighters. Later, the plant was also focused on the production of military aircraft. Its main products are Su-34 front-line bombers, but the company also produces parts for SSJ-100 civilian passenger aircraft.

The Russian heavy attack drone S-70B Okhotnik performed tests firing at ground targets with guided missiles, which are part of the Su-57 fighter's armament. This is reported by RIA Novosti with reference to an informed source.

The interlocutor of the agency stressed that the first experimental model of the device as part of flight tests performed a series of guided missile firing.

"Several types of air-to-surface missiles were used from the armament of the fifth-generation Su-57 fighter with a real defeat of ground targets," the source said.

According to him, testing has shown that the device effectively hits small-sized camouflaged targets with missiles at different times of the day and in all weather conditions.

They should send the S-70 prototype into Ukraine to shoot some missiles. Just for the propaganda value. Like they did with su 57 prototypes in Syria. It would really piss off the haters. Maybe that was some advertising too. Which brings the question once again, will they export it ?

That's a guided bomb though. Specifically the KAB-500S.

That's a guided bomb though. Specifically the KAB-500S.

Not really a kab 500S which looks like this : 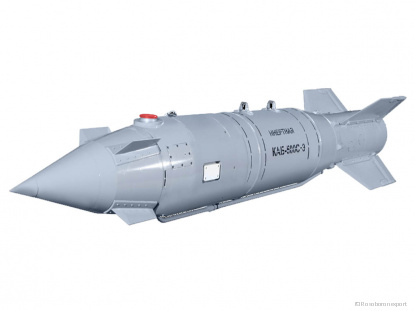 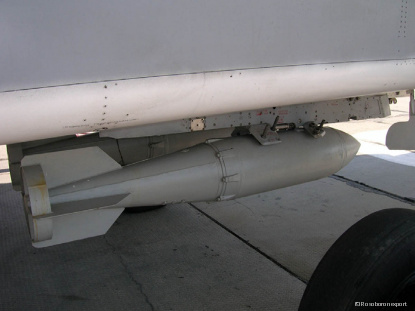 It´s just an old pic. In essence this news is not news. The whole philosophy of the Okhotnik is to use the weapons designed for the Su-57.

Hole wrote:It´s just an old pic. In essence this news is not news. The whole philosophy of the Okhotnik is to use the weapons designed for the Su-57.

Well they have the same interior (same weapon bays same software for weapons...) so it will be easy to test all the weapons they already tested on su-57.

Because to that, the tests will go really fast. Maybe we see a video from an Okhotnik used in real combat soon.

Hole wrote:Because to that, the tests will go really fast. Maybe we see a video from an Okhotnik used in real combat soon.

Unlikely they send it in ukraine where they can loose it. Maybe it will launch missiles from russian airspace but nothing more.
GarryB

They are making weapons, not fashion accessories... testing it against Ukraines defences is a good test, though they might not want serial models flying through airspace that HATO can monitor and gather information on... perhaps an expendable version to test some features, with corner reflectors to make it easy to spot and track... if the Orcs try to launch missiles at it it could retract the corner reflectors and test some towed jammers or disposable decoy defences... operating at high altitude it should be safe from most things the Orcs operate.

It could practise hunting various things like enemy artillery or find comms centres and use its electronics and communications to good effect.

Perhaps even testing dive bombing roles that would not be so safe for manned aircraft...
Tolstoy

Hole wrote:It´s just an old pic. In essence this news is not news. The whole philosophy of the Okhotnik is to use the weapons designed for the Su-57.

Okhotnik can be teamed up with Su-35 and Su -34. So once Okhotnik has carried out the SEAD operation then Su -35, Su -34 can carry out further strikes unhindered because the enemy's AD systems have already been destroyed by the Okhotnik.

Su-57 has better sensors and equipment but perhaps is not worth the risk for the extra capability over the Su-35 being used.

The threat of HATO learning too much about its capabilities more than the risk of it getting intercepted.

Testing and experience of operating the S-70 together with Su-35s and also Su-34s or Su-30s will be useful as long as they are sensible and careful not to take silly risks. 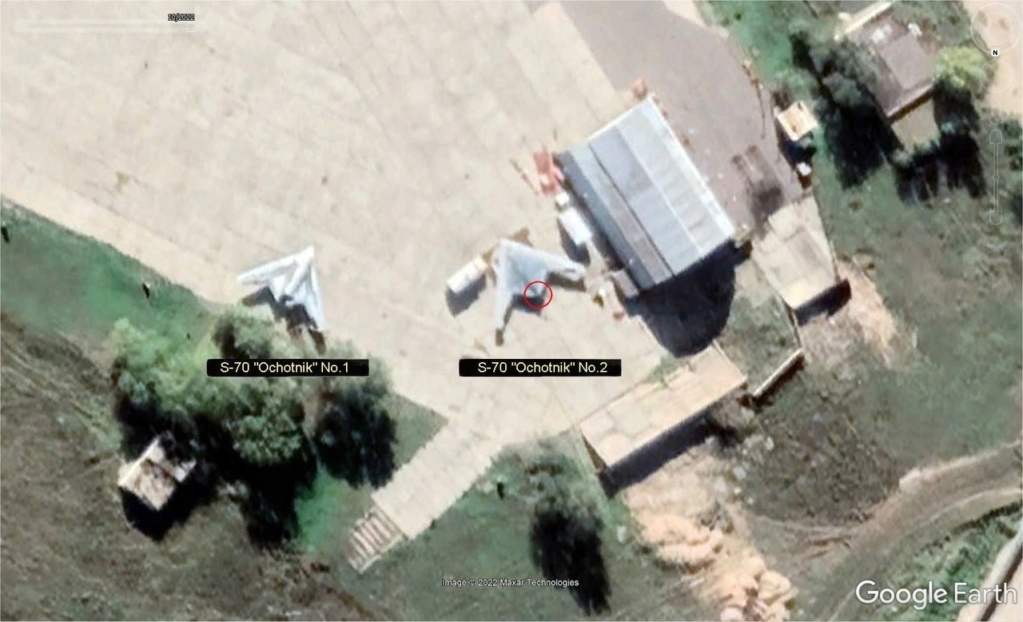 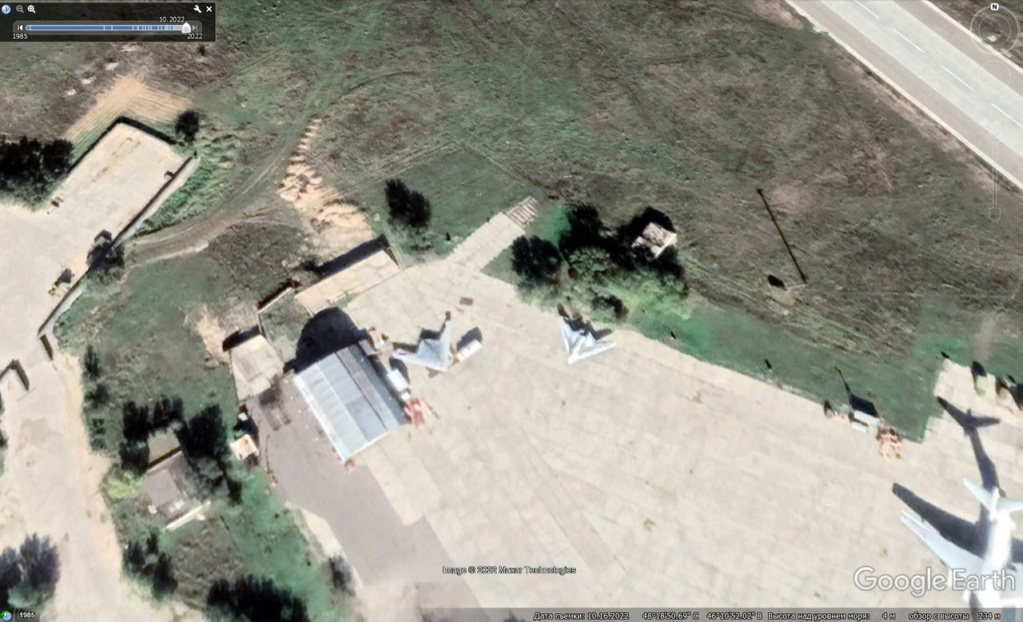