Rob Lee
@RALee85
·
1h
According to his sources, the S-400's radars surpassed Turkey's expectations. He said Turkey's 1st S-400 regiment has a Russian-made ground-based interrogator and Turkish crypto to work with the NATO Mark XII IFF system, but this would be replaced by one made by ASELSAN


Rob Lee
@RALee85
·
1h
The 2nd S-400 regiment was also supposed to receive a Turkish-made ground-based interrogator by ASELSAN, but Khodarenok says that Turkey's specialists thought the Russian-made system worked so well that they might be happy with it instead of a Turkish-made version
dino00

Turkey’s set to sign an agreement with Russia to jointly produce missiles and receive know-how to develop its own defense systems, a step that could boost criticism from its NATO partners that Ankara is moving away from the bloc.

“We will sign a deal after agreeing over final details regarding joint production or production of some parts in Turkey, and technology sharing,” said Ismail Demir, head of Turkey’s top defense procurement body, known as SSB.

The talks are part of Turkey’s deal to purchase a second S-400 missile-defense system from Russia and have reached a “quite ripe” stage, Demir said on Friday in Ankara. “The signing of a deal is just around the corner,” he said.

This could only be a problem for NATO if Russia is the enemy, which they keep saying they aren't... which can only be good for both Turkey and Russia.

The Turkish military industry is quite advanced in a lot of areas and this sort of cooperation will boost it rather further, while for Russia ties and sales to Turkey are good for trade and relations between these two practically neighbouring countries.

Simple rule of thumb... if Washington or London or Brussels are not happy then it is clearly the right thing to do...
JohninMK

Amazing what people upload on the internet. The gif at the link shows the effective area covered by the S-400 ar various heights.

Radar range for the #S400 located at Mürted Akinci AB, in #Turkey.

The S-400 is an impressive system, significantly bolstering Ankara's Air Defense capabilities. Costly though, both politically and financially.

But the picture for a single Patriot battery would only cover 120 degrees and rather shorter ranges too...

If you have four S-400 batteries spaced out around the country to minimise the overlap of coverage the performance would be eye watering... and if you tie in the national radar network coverage would be extensive...
dino00

Moscow and Ankara are negotiating the supply of a new batch of S-400, despite the coronavirus - source

I dont know what Coronavirus has anything to do with this since production at MiC plants havent stopped. Actually, production has increased especially for the civil sector.
JohninMK

First confirmation I have see that Turkey has the whole system including missiles. That was said in mid March.

Moscow. April 21. INTERFAX-Russia and Turkey, despite the situation with coronavirus, continue consultations on the delivery of an additional batch of S-400 air defense systems, an informed Russian source told Interfax on Tuesday.
"We continue this work despite the coronavirus," he said.
On March 16, in an interview with Interfax, the Director of the Federal service for military-technical cooperation (FSMTC) Russia's Dmitry Shugaev said that Russia expects to agree to supply Turkey with an additional batch of S-400s in the foreseeable future.
"The issue of an additional batch of S-400s from Turkey is on the agenda, it has not gone anywhere. We agree on the composition of the system, delivery terms and other conditions, " he said.
"Today, the negotiation process is underway, and we hope that in the foreseeable future we will come to a common denominator. This is the foreseeable future. Once again, no one has removed this issue. There is no reason to say that the topic is "covered up" or it is not on the agenda, " the head of the Federal customs service of Russia said on March 16.
As reported, Turkey bought four s-400 divisions from Russia. on October 23, 2019, Rosoboronexport reported that Russia fulfilled this contract ahead of schedule, supplying Turkey with all elements of the S-400 systems, including missiles.
S-400-long-range anti-aircraft missile system (JSC "concern of East Kazakhstan region "Almaz-Antey").
Viktor

so it basically takes the argument away from free market lobbiest countries. Because Turkey chose the path of the independent policy maker it will not rely on only one supply source

because in such case that same source retainers position from which can put Turkey back in the line according to its own and not Turkey will as it pleases. That is why we may see

gradual transition of Turkey towards other sources one of which is Russia. Turkey aviation can now be prone to sanctions and as US is the sole

Preparations for a new S-400 deal is in motion

Viktor wrote:Preparations for a new S-400 deal is in motion

With some components made in Turkey.
JohninMK

Viktor wrote:Preparations for a new S-400 deal is in motion

Unlikely to happen, because it does not seem that Turkey will have any money left to buy these with. They will likely aim for an IMF loan to get them out of the current disastrous situation and it will come with certain demands from the United States.
dino00

ANKARA, June 8 - RIA News. The Russian Federation and Turkey have agreed in principle on the supply of a second set of S-400 air defense systems , said Ismail Demir , head of the republic’s defense industry secretariat .

Russia completed the first contract for the supply of four S-400 divisions to Turkey in 2019 in the amount of $ 2.5 billion. The contract also includes an option for another regiment kit.

"We have a fundamental agreement on the supply of the second S-400 kit. There are technical works on technology transfer, joint production details, and a roadmap," Demir said in an interview with NTV.

And then it would have to sanction itself for paying billions of dollars to Russia...

I think Turkey will probably need to look to Russia and China for loans instead of the IMF which would obviously have too many strings attached...

It won't be in Turkish currency.

MiddleEastWatch
@MiddleEastWatc1
·
20h
“We are currently discussing with our partners the method of financial payment for the implementation of this contract,” the general manager of Rosoboronexport, Alexander Mikheyev stated.

20h
Chairman of the Turkish Defense Industries Board, Ismail Demir:
We have reached an agreement in principle with Russia regarding the supply of the second group of S-400 systems.
GarryB

If Erdogan was smart he could make Assad an offer to work together to take on the Kurds in Syrian territory where Turkey gets a cut of oil production in the Syrian oilfields currently held by the Kurds...

Erdogan gets to get rid of the Kurdish threat on his border and Assad will get his oil revenue back and help kick the yanks out of his country... everybody wins. 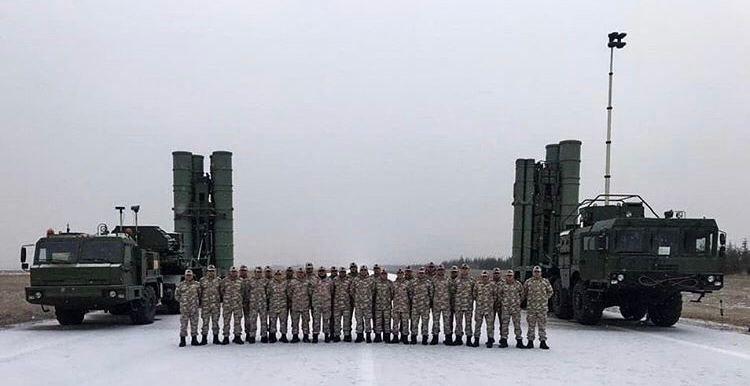 On October 6, 2020, it was reported that one division received by Turkey of the first regimental set of S-400 air defense systems arrived in the Sinop area on the Turkish Black Sea coast for the first range of combat training exercises.


Video of elements of the Turkish S-400 air defense system in Sinop:

As reported, on 16-17 October 2020 in the Turkish Missile Range near Sinop on the Black Sea coast of Turkey were made the first practical training and live firing of the first regimental kit produced by Turkey anti-aircraft missile system S-400. Combat training of the first regimental set of the S-400 anti-aircraft missile system received by Turkey from Russia in the Sinop area 10/16/2020 (c) frame from the Turkish television report