That looks perfect for the Ed Hardy, Tapout squad, but with more flair and fire power.

No international shipping though.

The tank successes of Uralvagonzavod

Domestic tank builders were unexpectedly pleased with detailed information on the products manufactured for export and plans for the future, having laid out a detailed annual report for 2016 on the official website. Thanks to "Lente" and Ilya personally for the details:

Priority directions of military-technical cooperation in 2017 are:

2) Further work to promote the final products.
- Completion of pre-contract work with the customer "414" (Kuwait - note) for the delivery of 146 tanks T-90MS/MSC.
- Continuation of work on the promotion of the T-90MS tank for the customer "356" (India - note).

4) Expansion of geography and volume of supplies of spare parts, units and units as a subject of military technical cooperation.
- Further advancement to the African market, and first of all the organization of practical work on the supply of spare parts, units and assemblies, repair and repair with modernization in the interests of the MOs of the customers "231" (Ethiopia) And "024" (Angola).

5) Continuation of work on equipping facilities on the territory of foreign countries that provide comprehensive service and repair of previously supplied equipment, including the implementation of projects to create joint ventures with foreign customers.
- Work on the project to create a structure for the after-sales service and repair of T-90MS / MSC tanks at the customer "414" (Kuwait).
- Work on the project to create an enterprise for the licensed assembly of T-90S / SC tanks at the customer "818" (Egypt).
- Promotion of the project for the establishment of an enterprise for the overhaul of T-90S / SC tanks in the territory of the customer "012" (Algeria).

So there are 2 contracts for T-90S with Vietnam and Iraq. Nice

George1 wrote:So there are 2 contracts for T-90S with Vietnam and Iraq. Nice

#Important: UVZ Corp intends to create an enterprise to begin assembling T-90S in #Egypt, reported that 400-500 tanks have been purchased.
Benya

Well, this is not a tank, but it is related to UVZ

The Russian Defense Company Uralvagonzavod Corporation (UVZ) of Rostec State Corporation presented a unique armored bulldozer B10M2-S produced by the ChTZ-URALTEK enterprise. The vehicle was created in the framework of production diversification program which is to increase the share of civilian output, the UVZ press service said. 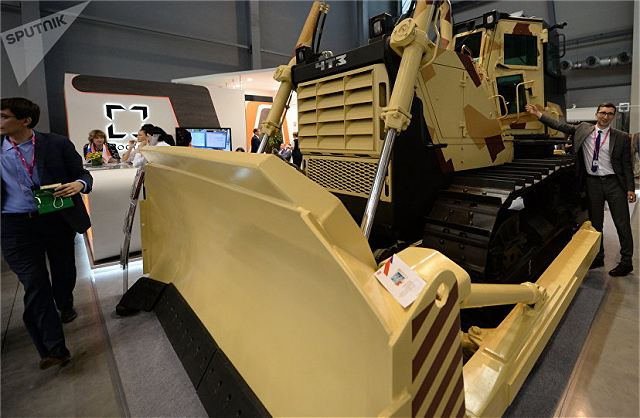 New Russian-made Uralvagonzavod B10M2-S armoured bulldozer (Image source Sputnik
"The B10M2-S bulldozer is an excellent example of dual technologies. It is armored and can be used in hot spots and in peacetime. The vehicle can engage in a wide range of bulldozing and moldering operations at I-IV-grade ground, including frozen and rock soil. It can engage in engineering operations, clear rubbles, erect protection constructions, restore damaged buildings and thus normalize the situation and promote transfer to peaceful life. The armor does not reduce its productivity and operational characteristics," it said.

In contrast to foreign analogues the hood of B10M2-S is bullet and fragmentation-proof which allows the vehicle to operate in hostility areas. Special protection also defends the internal equipment of the vehicle cab from bullets fired from 7.62mm SVD sniper rifle. Armored engine elements protect machinery and equipment from AKM 7.62mm bullets.

Upon customer request the level of bulldozer protection can be increased, the vehicle cab and hood cap can be changed, additional protection installed on several units, and suspension (shock-absorber) of the cab enhanced. Armor can be mounted on the tractor in the place of operation.

Benya wrote:Well, this is not a tank, but it is related to UVZ

Likely yes, or maybe combat engineer troops were in lack of such vehicles.
Benya

T-14 Armata
Rostec’s exposition will include products of the Uralvagonzavod Corporation, Burevestnik Central Research Institute, Plant No. 9, Elektromashina Company, Vityaz machine-building company and other Uralvagonzavod subsidiaries. "The T-14 Armata tank that is the sole third-generation tank in the post-war world will be shown as part of the open static exposition. The upgraded DT-10PM tracked carrier produced by the Vityaz Company will be another full-scale model," the press office said.

"A number of products will be shown only to military experts as part of the closed exposition. The BMPT fire support vehicle and T-72B, T-72B3, T-80U and T-90A tanks will be demonstrated in operation," the press office added. The Elektromashina Company will show several systems, including a smokescreen generator, the DKMV driver display system, the APP172 gear shifting system, the KShM-2 air conditioner and the PPO-25 automatic fire-extinguishing system.

The company is also planning to display the most advanced BM03 combat module that will be mounted on several fighting vehicles. It is currently undergoing state trials and will be made operational as part of the Taifun armored vehicle in late 2017.


I'm curious about that BM03 combat module, since I have never seen it. I guess it's brand new, that's why.
GarryB

They will likely consist of four and six wheeled light vehicles in the the 10-18 ton weight class.

The question is, which vehicle type is this BM03 turret module for... it would give us a hint as to what its armament might be.

I would suspect it is a standardised module so lets say it is a Heavy machine gun and a grenade launcher in a small turret it could be for the AFV model of each vehicle family.

Conversely it could be a module for a recon vehicle with a 30mm cannon but also all sorts of radar and EO sensors for recon work that can be mounted on the various vehicle families too... ie Typhoon, Boomerang, Kurganets, and Armata.

I guess we will just have to wait and see.
miketheterrible

Luq man is showing what the BM03 is

I still am waiting for the 57mm weapon system for IFV's.
Luq man

miketheterrible wrote:I still am waiting for the 57mm weapon system for IFV's.

miketheterrible wrote:Luq man is showing what the BM03 is

I still am waiting for the 57mm weapon system for IFV's.

PapaDragon wrote:
They will present 30mm turret for Typhoon-K on Army-2017

I guess it'll be the same one like Tigr have
miketheterrible

Do you think this 57mm can be installed in Tigr?
miketheterrible

Do you think this 57mm can be installed in Tigr?

clearly not. I imagine suspension would be shot. But would be cool as hell.
T-47

clearly not. I imagine suspension would be shot.  But would be cool as hell.

LOL yeah. But I think they should offer this turret as a modular system. Which can be replaced very quickly in place of 30mm armed Epoch turret.
GarryB

Actually I think the 57mm gun will be fitted to Typhoon and tigr, but only heavier 6 wheeled versions of both types.

It would be a very effective weapon for light forces in lieu of a 125mm gun which is probably too much gun for such a light vehicle.

Otherwise I think the other heavy gun such light vehicles will carry would be a 120mm gun/mortar... perhaps with active suspension lowered to actually contact the ground to take the recoil perhaps...

Regarding the BM003 turret... I wonder if it will be a standard turret for new Russian vehicles... ie on top of unmanned turrets like the Coalition and MBT variants of the different vehicle family types, or if it is just a turret for light vehicles like this one on Typhoon or the gun turret on the BRDM-2 or MT-LB...

The video above shows a fairly long recoil stroke for the 57mm gun so the recoil on the vehicle is probably not that big...
George1

"There is one task: to complete all tasks on the state defense procurement program. For the next years, we will be buying about 200 tanks of various versions per year," he said on Friday after visiting the Uralvagonzavod research and production corporation.

Overhaul of T-80B tanks at the 61st Armored Repair Plant in Strelna (since 2015 part of NPK Uralvagonzavod). 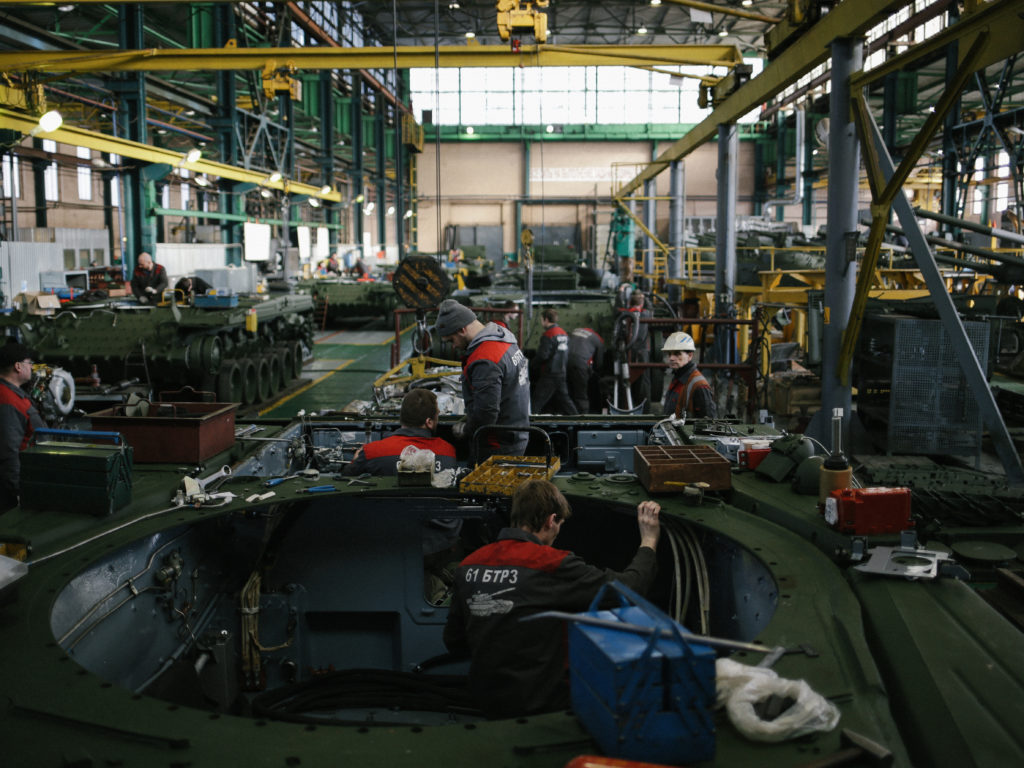 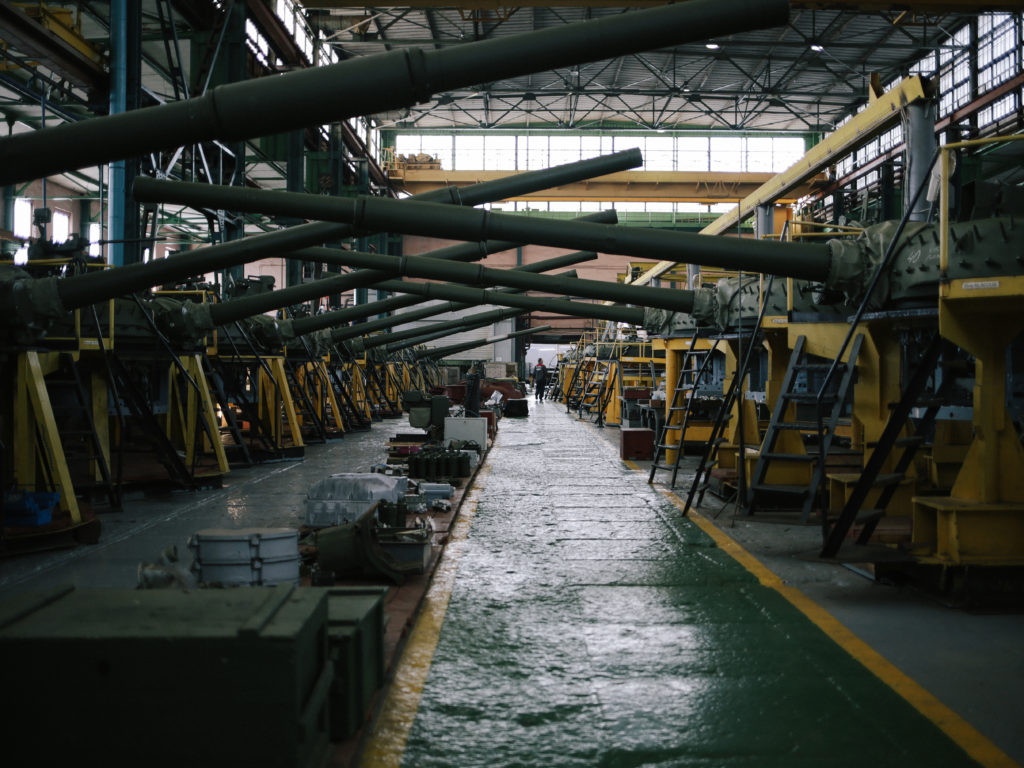 Assembly of T-90S tanks at the Uralvagonzavod.

Numbers with the letter B are tanks for Vietnam, with the letter I for Iraq. Looking closely I noticed and letter P - is it really the new T-90 tanks for the Russian army after the break since 2011? [apparently, these are the first T-90M tanks built under the contract of 2017 with the Russian Ministry of Defense - bmpd] 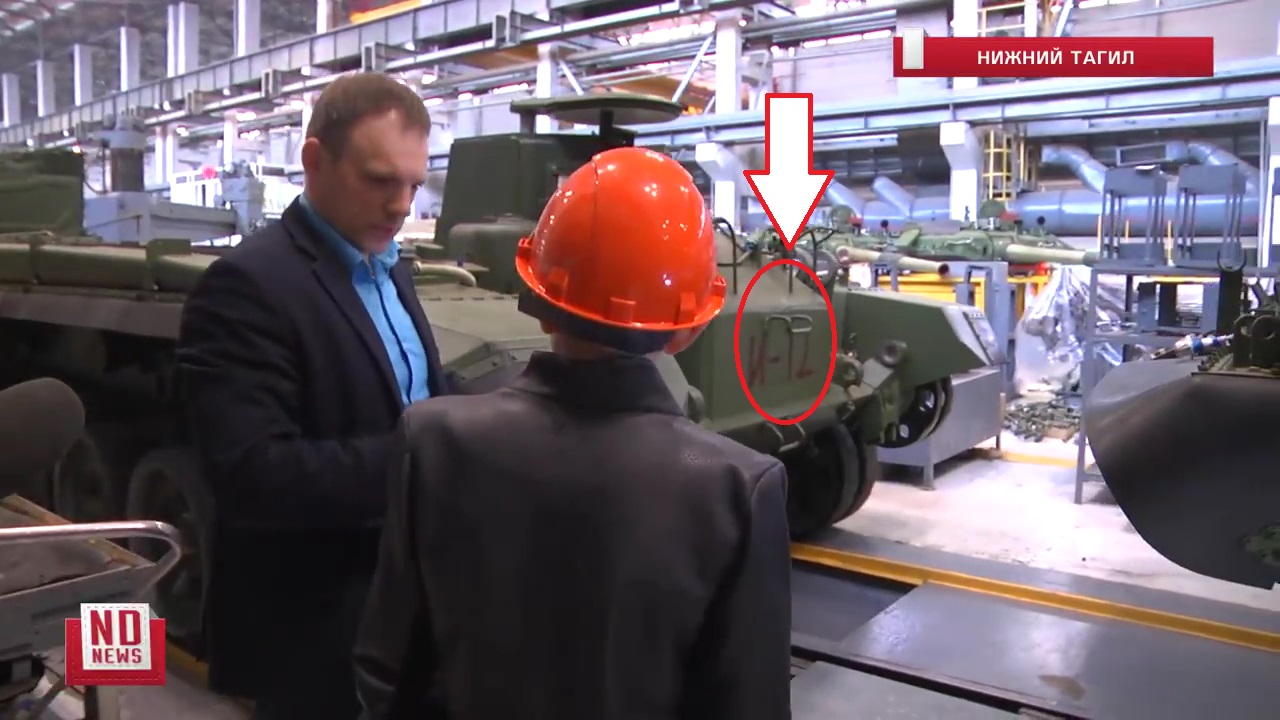 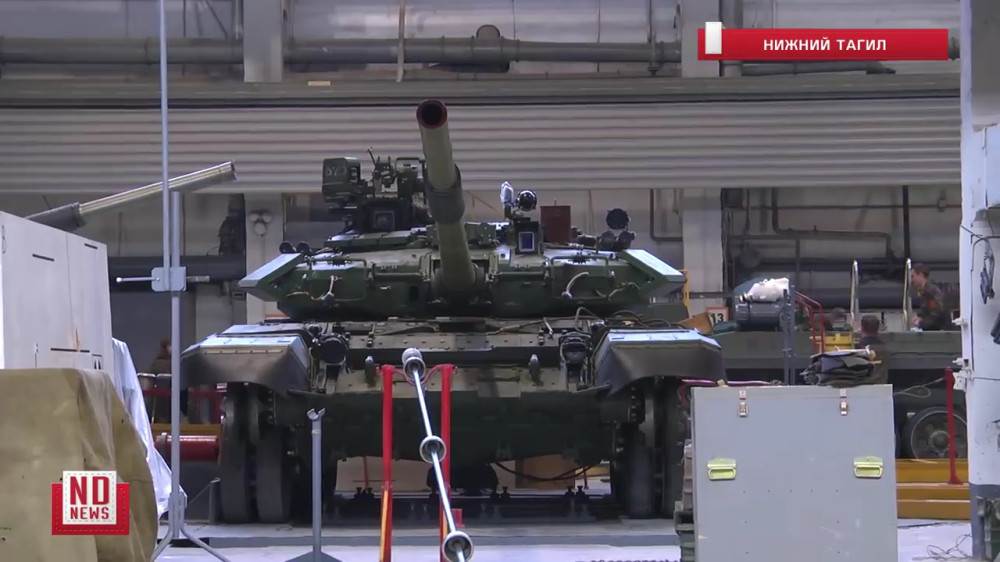 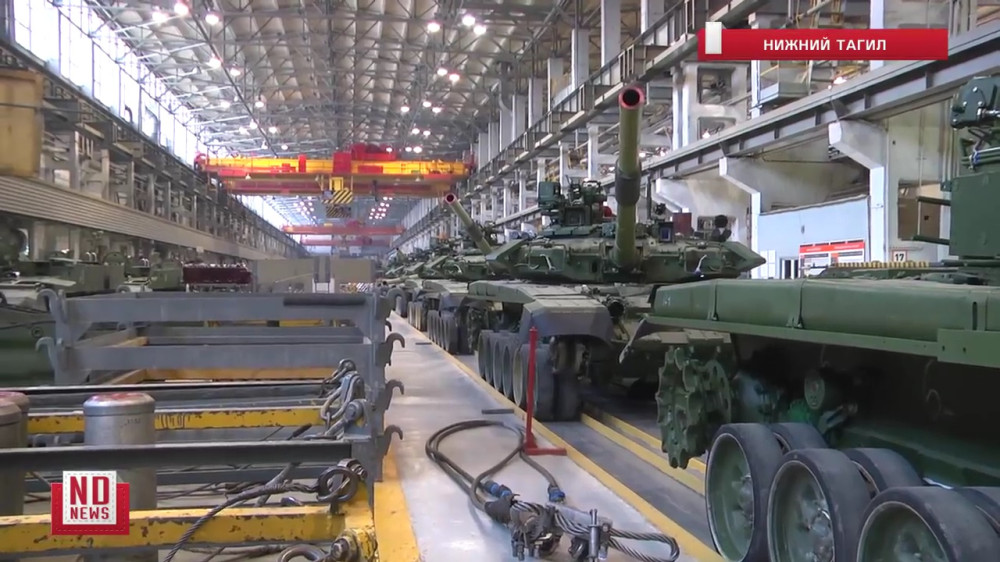 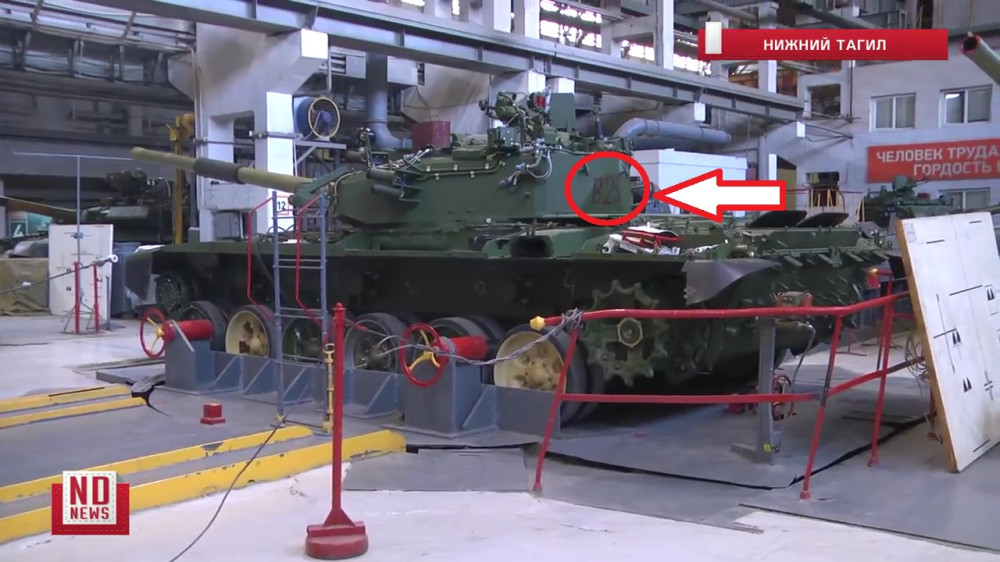 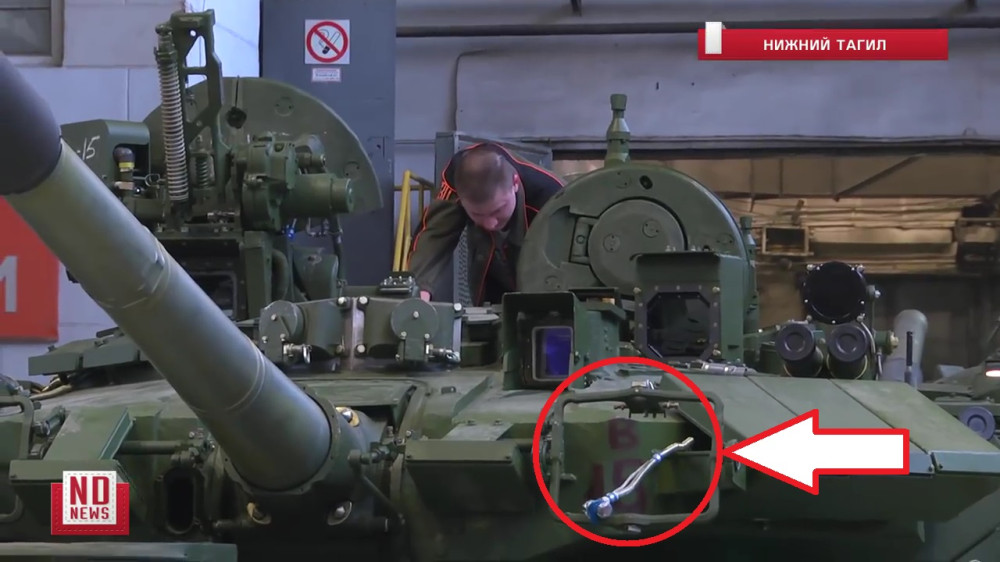 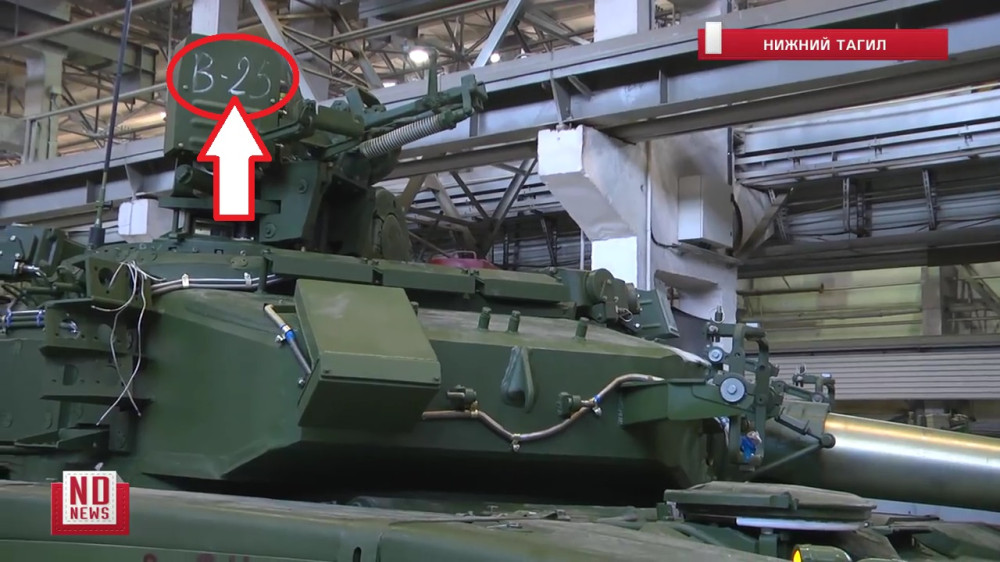 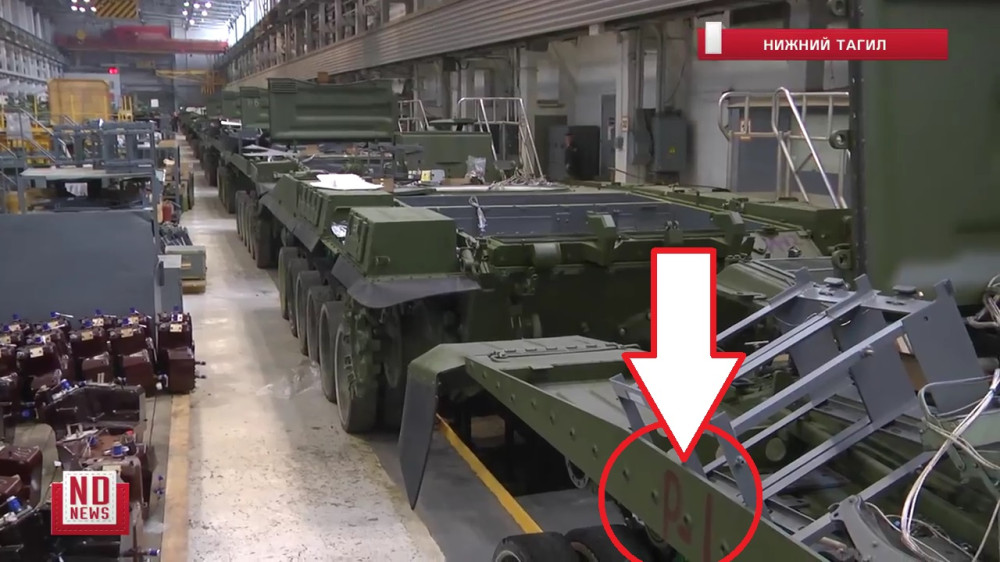 The first prototype of the tank "Object 195" 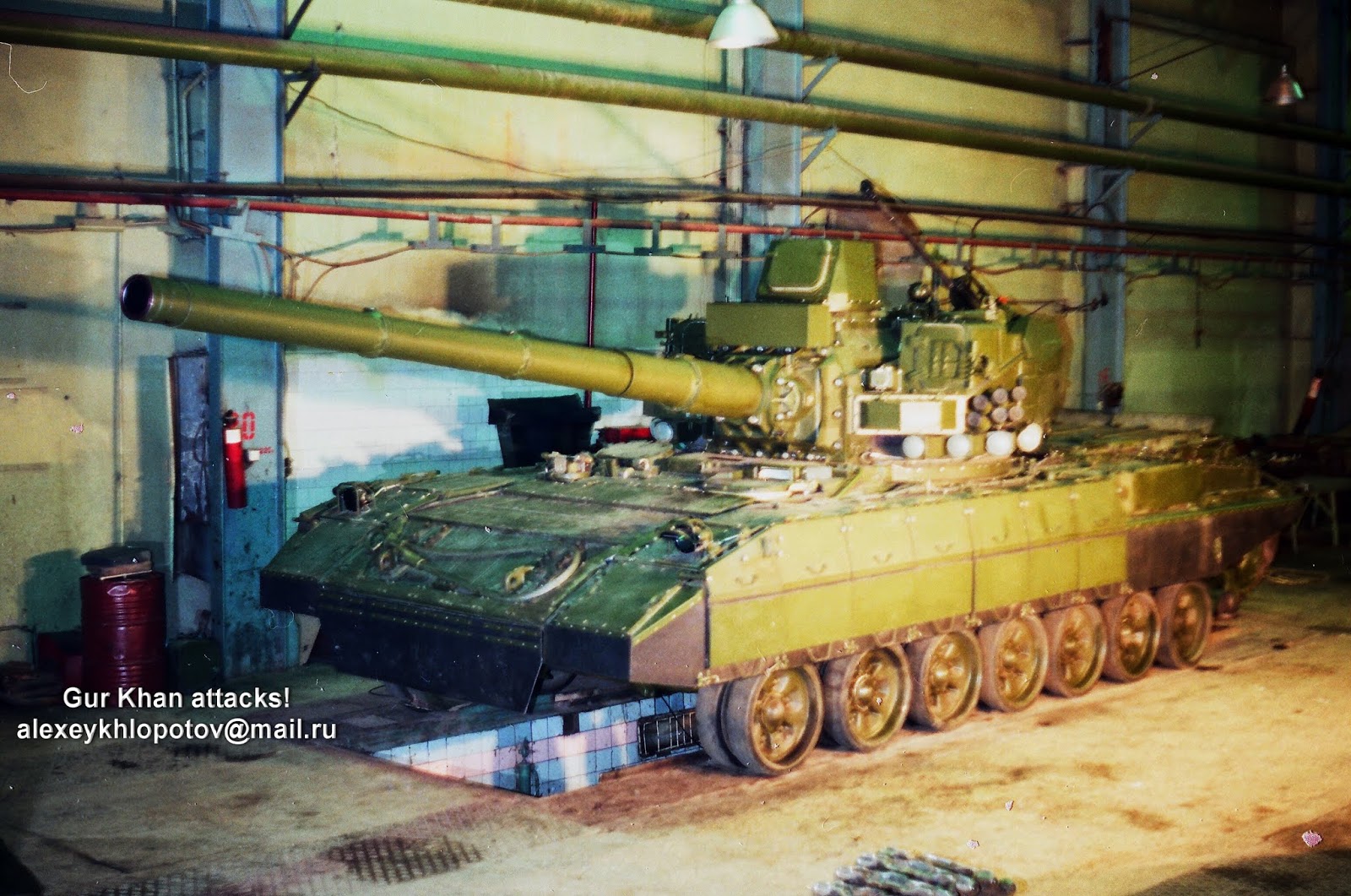 GarryB wrote:That 152mm gun looks nice and powerful... and is that a 30mm gun on the back?

Yes, its a 2A42 installed rotated around its axis in a similar fashion to the one installed on Ka-52. It can fire co-axially to the main gun or as you can see, elevate independently.
As others pointed out, the way it is mounted could be an effort to reduce the impact of the muzzle flash on the nearby gunner sight.
Sponsored content