"We have completed the first stage of modernization of the Belarusian S-300 air defense systems and agreed to intensify work on further deliveries of these systems to Belarus," Serdyukov said after a meeting of Russian and Belarusian defense officials in Minsk.

Moscow and Minsk signed an agreement in February 2009 on the joint protection of the Russia-Belarus Union State's airspace and the creation of an integrated regional air defense network.

"We are strengthening this network," Serdyukov said.

Modernized versions of S-300 have a maximum engagement range of up to 150 kilometers (93 miles).

So the question is which versions of S-300 are Belarus getting.

The article mentions the performance of upgraded versions of S-300 but doesn't actually mention the type of missile they are transferring.

So the question is which versions of S-300 are Belarus getting.

The article mentions the performance of upgraded versions of S-300 but doesn't actually mention the type of missile they are transferring.

Or it might be a case of older systems that have been in Russian service getting a quick overhaul and moved to Belarus equipped with newish missiles.

There will still be lots of old SAM systems in Russian service that are relatively obsolete like SA-3s and SA-5s that probably operate with old model SA-10s.

The purpose of the old SA-3s is to help defend the SA-10s, but Panstir-S1 would do a much better job and for not that much money in comparison to the cost of keeping the old SA-3 systems operational.

Regarding the compatibility any Soviet SAM should be compatible if they used to be operating in Russia then they should still work in Belarus.

This wont exactly be charity, Belarus are likely paying something for this, so they might be choosing to take the older SA-10 systems rather than let Russia retire them and replace them with newer models.

That is not to say they wont be upgraded before they are moved to Belarus, or indeed that they will not be new build systems.

Yes all this is purely speculative nature.

on CSTO prices. I remember reading such news provoked rising eyebrow on some neighboring states.

Iskander was involved too.
GarryB

I could certainly see Belarus getting S-400 before some other export clients, but I also rather think the Russian military will absorb production capacity of this system for quite some time to come.

If the ABM system for europe does not properly include Russia then I could see S-400s and Iskanders in Belarus as an initial response, and possibly a withdrawl of Russia from the INF treaty as another option.

S-400 in Belarus and Iskander would be a reversable move Russia could use to say to the US and EU ... do you really want to exclude us?
If they do then withdrawing from the INF treaty means they can start making missiles that are not strategic and are therefore not counted in the START treaty, but can target the ABM system in Europe to overwhelm it so that it doesn't effect the strategic balance.

They will retire Su-24s. Su-30 could a be good choice, if they have money of course
GarryB

So they might be buying Indias old Su-30K aircraft with an upgrade.

Don't know what they are talking about obsolete when so many Su-27s are still operational, these will be a significant upgrade and quite capable aircraft.

I think Russia needs to help Belarus help itself.

A friendly strong Belarus is much better for Russia than a weak broken Belarus that might turn to NATO membership for salvation...

“We discussed many issues related to the Air Force. I asked for assistance and I got it,” Lukashenko told reporters on Friday, commenting on his recent talks with Russian President Vladimir Putin in the Black Sea resort of Sochi.

“In the near future, we will receive modern [Russian] aircraft to patrol our joint borders,” the Belarusian president said, without specifying the type of the warplanes.

Lukashenko explained that the combat jets in service with the Belarusian air force have become obsolete and worn out.

“We could still use them if a war breaks out, but in the time of peace we need modern aircraft,” he said.

According to official data, the Belarusian air force has 38 Soviet-era MiG-29 and 17 Su-27 fighter jets capable of carrying out air patrol missions.

The Russia-Belarus Union State is a supranational entity formed in 1999 as a unique attempt at political and economic integration among the former Soviet republics.

The first move to the west for Russian gear for perhaps 2-3 decades.

Besides it is either new production work with future upgrade work or upgrade work with the potential for more later on for a Russian aircraft factory.

Belarus is not huge so there is no need for Flankers... I would give them some Mig-29M2s and perhaps look at upgrading their existing Mig-29s to SMT standard, that would give them maximum performance at minimum cost and also throw some work MIGs way as well, without Poland getting all upset about Su-35s in Belarus.

The new fighters for Belarusian air forces promised by Russia in fact have been operated by India before. The vehicles are owned by Irkut Corporation, Gazeta.ru reports with reference to Vedomosti.

The president of Belarus, Alexander Lukashenko said on September 21st that during his meeting with Vladimir Putin “a lot of questions connected with the air forces have been discussed. I asked for the supported and got it. In the nearest future we will acquire advanced aircraft». This refers to the above mentioned vehicles.

18 Su-30Кs have been delivered to Indian air forces inlate 1990s by the Irkutsk Aviation Plant as a provisional measure until the start of more advanced Su-30MKI fighter’sproduction. The contracts have been signed in 1996 and 2000 on delivery and licensed production of 190 Su-30MKIs on behalf of India.

In 2007 India has signed a contract on delivery of 18 Su-30MKIs in exchange for return of 18 Su-30Ks, which have passed into the ownership of Irkut Corporation and have been delivered to the 558 Aircraft repair plant (Baranovichi, Belarus) in order to avoid paying Russian VAT.

«Belarus purchased a number of Tor air defense systems and Yak-130 jets and it is going to purchase more. The requests have been signed and the decisions have been made. Yesterday I signed a list, which permits the deliveries. Now we have to sign the contracts and then start the deliveries», — Deputy Director of the Federal Service for Military-Technical Cooperation, Konstantin Biryulin, told ITAR-TASS.

Belarusian Ministry of Defense and Irkut Corporation (Russia) started implementation of a contract for delivery of four Yak-130 operational trainers, TASS reports with reference to the Minister of Defense of Belarus, Andrei Ravkov.

“We started implementation of the contract for delivery of four Yak-130 operational trainers. The deliveries will be completed in 2015,” he noted.

The contract between Irkut Corporation and Belarusian Ministry of Defense for delivery of four Yak-130 jets was signed in December 2012 “in the network of implementation of an agreement between Russia and Belarus aimed at development of military-technical cooperation between the countries”.

Yak-130 is the two-seat next-generation operational trainer designed for training of military pilots. It is the only operational trainer in the world to feature an aerodynamic configuration and aircraft performance similar to advanced fighters at subsonic speeds. The aircraft is fitted with state-of-the-art avionics suite; the jet offers high reliability and long service life. It is capable of carrying a payload of 3 tons.

Belarus was the first member of CIS Region to purchase Yak-130 jets.
Viktor

A group of Belarusian service members (4 pilots and 18 technicians) are undergoing theoretical training dedicated to operation of Yak-130 jets at Zhukovsky-based personnel training center, BELTA reports with reference to Belarusian Ministry of Defense.

The ministry added that the high-skilled specialists able to assure proper operation of the new aircraft type were selected for the training. “It is planned that in late April Irkut Corporation will deliver four Yak-130 operational trainers to Belarusian air forces,” the ministry added.

Until the end, the Russian Federation will supply Belarus 4 Division C-300
mack8 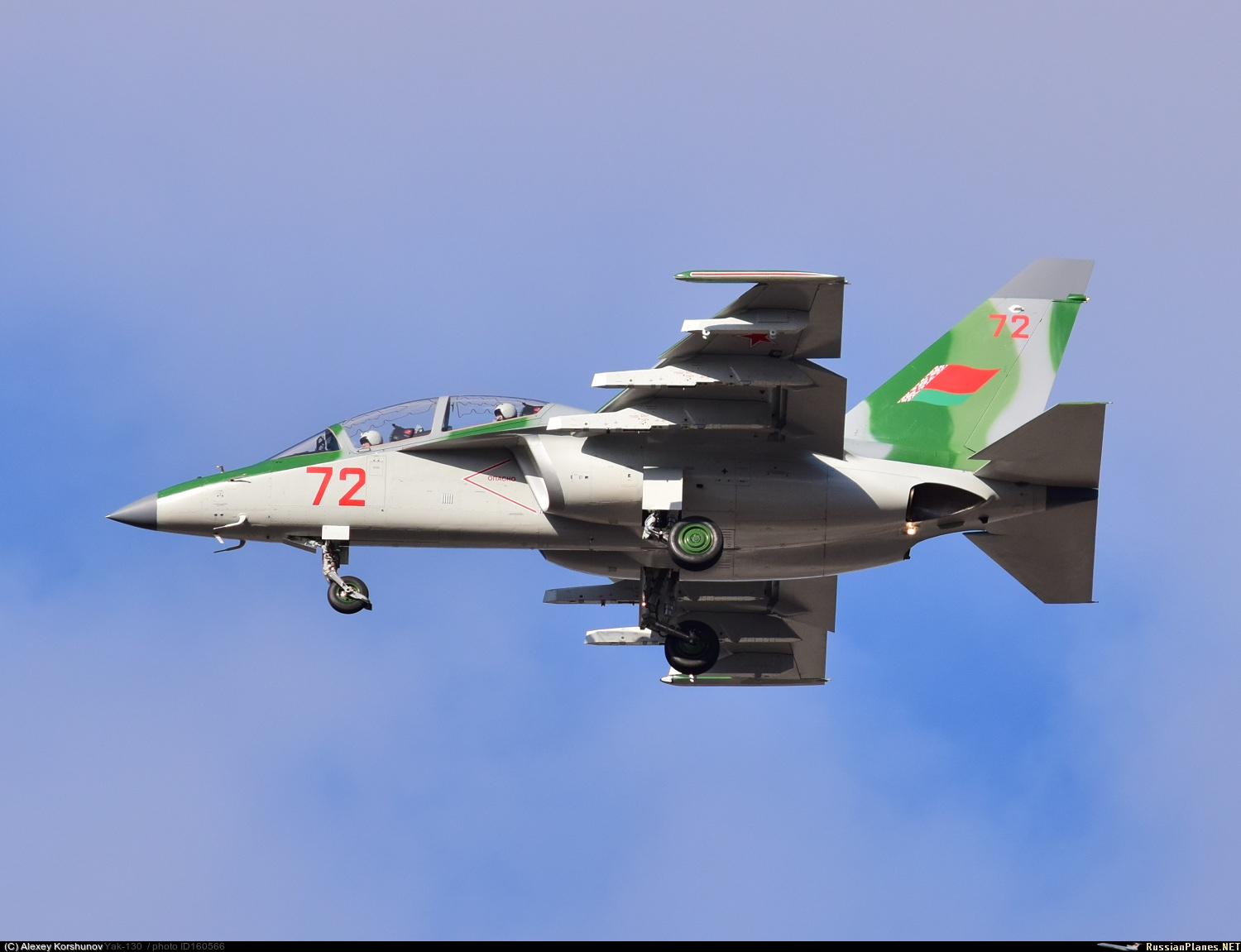 KUBINKA /Moscow Region/, June 16. /TASS/. The Helicopters of Russia has concluded a contract with the Defense Ministry of Belarus for the supply of twelve Mi-8MTV-5 military transport helicopters in 2016-2017, the holding company’s CEO Alexander Mikheyev has told the media.

"The Mi-8MTV will let the allied state enhance its defense capabilities and expand the potential of the armed forces," he said on the sidelines of the Army-2015 show. "The conclusion of such a large-scale contract has become yet another step towards strengthening friendship and business relations between the two countries."

The contract will be performed in keeping with the Russia-Belarus agreement on development of military-technical cooperation concluded in late 2009. The Belarusian military will get the helicopters possessing the same parameters as those used by the Russian military.
Sponsored content