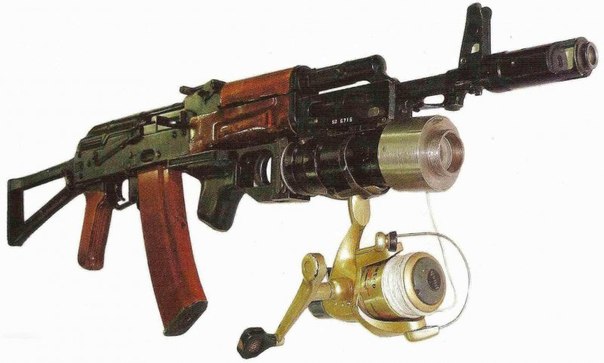 I'll meet your fishing-line grenade, with my bayonet grenade.

What could possible be the point of this?

What could possible be the point of this?

The-thing-next-door wrote:
What could possible be the point of this?

What's the point? The bayonet obviously.

So is it one of the gas containment based silent weapons like those silencerless silent pistols with a captive piston in the cartridge, this thing possibly storing the pressurised gas in the "grenade"?

But why a knife blade and not a dart?

Because it is assholes using software to create bullshit.

The Soviets had silent grenade launchers... ironically the only firearm launched bayonettes I ever heard of was the SA80 which had an over the muzzle bayonette design that sometimes had problems with its catch and was launched from the weapon when the weapon was fired.


This is a 30mm grenade launcher with a silenced cartridge that launches the grenade... a bit like their silent 82mm mortar.

It replaced the earlier Device D 30mm grenade launcher based on a single shot pistol with a suppressed firing cartridge:

Will likely move the fishing rod and bayonette grenade launcher posts to the talking bollocks thread... likely created by westerners jealous that the Soviet underbarrel grenade system is superior to the US piece of crap M203 in almost every regard.
George1