PapaDragon wrote:
Did anyone die in those Canadian incidents?

If not then it's a big difference.

Nobody cares if equipment gets roasted as long as nobody dies.

This fire would have been less than a footnote had nobody died.

Tbh, not sure. They abandoned it quickly though, to later repair it.

Anyway, it sucks. But as for all those officers (minus the two heros of Russia) are replaceable since in that particular grouping, they go through ranks rather quickly. Presumably.  Loss of human life is always tragic.

kvs wrote:Why were there 14 people in the submersible to start with.   Were they finishing its construction under water.   This incident has the rife
smell of criminal incompetence.   Russia' worst enemy.

The vessel carries 21 people total. That's how many were in there. It was in use when the incident happened. The remaining survivors brought the sub up and the vessel was towed to docks.
Vann7

It could be a cover up , of something more serious , like submarine was hit by a mine..
But such things you will never know , are keep in secret.. Just a year go..
RT news for example.. made a reports. and US vs Russia hostile encounters near
Russian borders.. that ended with American and Russians killed.. they reported about
a Dozen of incidents , very close to Russian borders.. that happened in the 70s and 80s and 90s.. that shots were fired... and people died from both sides.. It is rare.. but it happens.. and the truth about it is not reported until many decades later. if ever.

It could be just pure incompetence in security protocols..
it will not be surprising.. Russia is the country of the developed nations in the world.
With the worse fire security regulations. There is also very bad regulations in construction..
too. you saw how a hundred of Russian soldiers died in their barracks ,while sleeping in
their army base in Russia.. So Russia is the only nation in the world that can lose
a hundred of soldiers , while sleeping in their beds in their own country in a non war zone... .The entire security regulations in Russia whether is fire protection,or drones or Construction are terrible. The many childrens who died in a cinema years ago.. the building had no permission or any inspection for fire safety since years.. Such things
are only possible ,when the entire system is bad ,and nobody give a dam of doing their job
correctly.

So much over reaction as usual.


Where did you get this news from?

Probably from the other people in the sub that brought it back up to the surface.

I also love the fact that you think the heroic acts of those that died has become cliche to you and such a source of amusement... even more so your own comment when you posted this to begin with... what did you say...


This will be rumor shitshow so I advise to keep and eye on what Martyanov says about it, he actually knows the topic

Would congratulate you on your prophesy but as you delivered the shit show yourself perhaps not so much...


In order to save the submarine and rest of the crew, the 14 that died locked themselves in through emergency protocol to prevent the fire from spreading.

They followed standard procedure on submarines and tried to prevent the loss of the whole vessel and entire crew, but gave up most chance of themselves surviving... sure they were only following the rules, but it still takes guts to shut yourself in on the side of the door with the fire.


I call BS on this one


If they can verify it then it's​ good

Of course... we may never actually know what happened... this isn't a captains yacht for pleasure cruises... their barbeque didn't get out of hand and start a bigger fire... most likely they could have been working with various AIP propulsion systems or oxygen generating systems and a mistake was made, so something totally unexpected might have happened...

But you sound more and more like the western media... immediately claiming it is a lie and therefore serious incompetence.
JohninMK

What I'm curious about is how come there are so many fire related incidents on Russian subs and almost none on American ones? What does USN do differently?

One in a Kilo in the Far East last year described at the time I think as a "training exercise".
Regular

I wouldn't be so quick to believe shitty liberpiderast media lies. I highly doubt that 14 people died in this fire(7 captains?? What's next, Putin died there too??), like with all accidents in Russian navy are always exaggerated to ridiculously absurd levels. Let's wait for RuMod to clarify what and how that happened.
My bet is that body count is way lower and there was malfunction in one of the key systems that caused it and not negligence as libmedia state.
hoom

It's not fucking sabotage.

You people believe in all tinfoil hat conspiracy just makes you sound stupid.

It was a fire onboard a vessel made in the wild 90's of Russia when there was little money and quality of work was very shoddy. All the Yak 130's that crashed were all made in the 90's. But low and behold, now all newer vessels made past 2008 seem to be fine. It has a lot to do with money and MiC modernization.

This vessel was laid down in 1988. It's one of other vessels of same class.  It was inaugurated somewhere in 2003. Meaning that it's entire life of being built was during the shittiest of years in Russia.

Either scrap entirely everything made in the 90's or expect more disasters like this. That's the cost of having a shit period. It's like the low birth rates now. Byproduct of the 90's. Is there a conspiracy with that too?

The good thing is that due to design, they were able to compartmentalize the fire and that the vessel was saved. Now it will take a year or two to fix. But at the cost of 14 high class officers which will now take 6 years or so to replace.
GunshipDemocracy

The good thing is that due to design, they were able to compartmentalize the fire and that the vessel was saved. Now it will take a year or two to fix. But at the cost of 14 high class officers which will now take 6 years or so to replace.

indeed, likely they decided to flood a compartment to save remaining people (and the ship)
Tsavo Lion

Too many conspiracies in this thread. It was a fire with tragic consequences...they'll probably announce the cause after the investigation is done 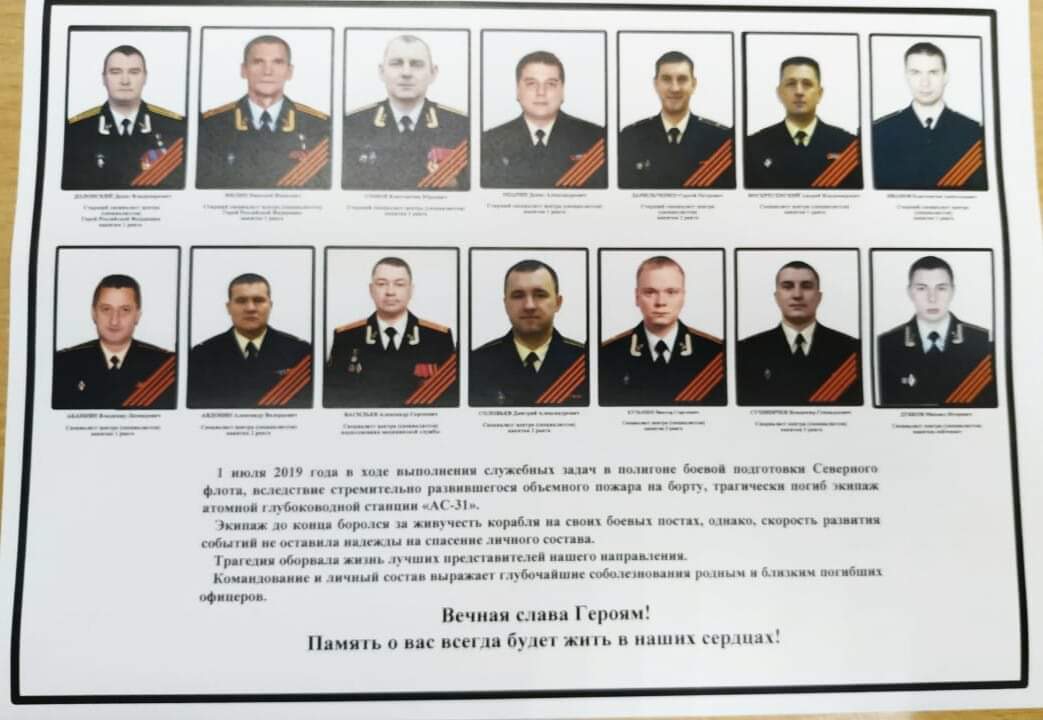 Cyberspec wrote:Too many conspiracies in this thread. It was a fire with tragic consequences...they'll probably announce the cause after the investigation is done

Looks to be a fair analysis of the submarine disaster.

JohninMK wrote:Looks to be a fair analysis of the submarine disaster.

Not when they reference radio free Europe. Once again, they are using unnamed sources.

There will be no analysis of this event, it will remain indefinitely classified as confirmed by government

Had government wanted to they could have kept this entire event completely secret, they could have given​ families different cover stories about casualties and nobody would have ever been​ any wiser

But this is all anyone will ever know, story ends here, rest of it is in classified archives and it will stay there

indeed, likely they decided to flood a compartment to save remaining people (and the ship)

Most of the time such fires stop on their own when they run out of air. It is also when the people in that section die... there is no need to fill it up with water, and if you did so you make it much harder to raise the sub to the surface so the survivors can get out.

A news spot just on said there were 15 people in the compartment when the fire started and so the extra person who was a civilian observer would pushed through the door before it was shut and sealed so the other 14 members could fight the fire.

I was not there and have no knowledge of what really happened but I say it takes guts to remain on the fire side of the door, but if 14 stayed it was because they thought they could deal with the fire and save everyone, but if they couldn't that the remaining ones in the rest of the sub would have a chance.