Lol, looks like those tribal terrorists do not control anything around Deir ez zor. All is in deals with IS.

Geolocation shows who controls what east of Deir.Looks like SDF never captured this villages 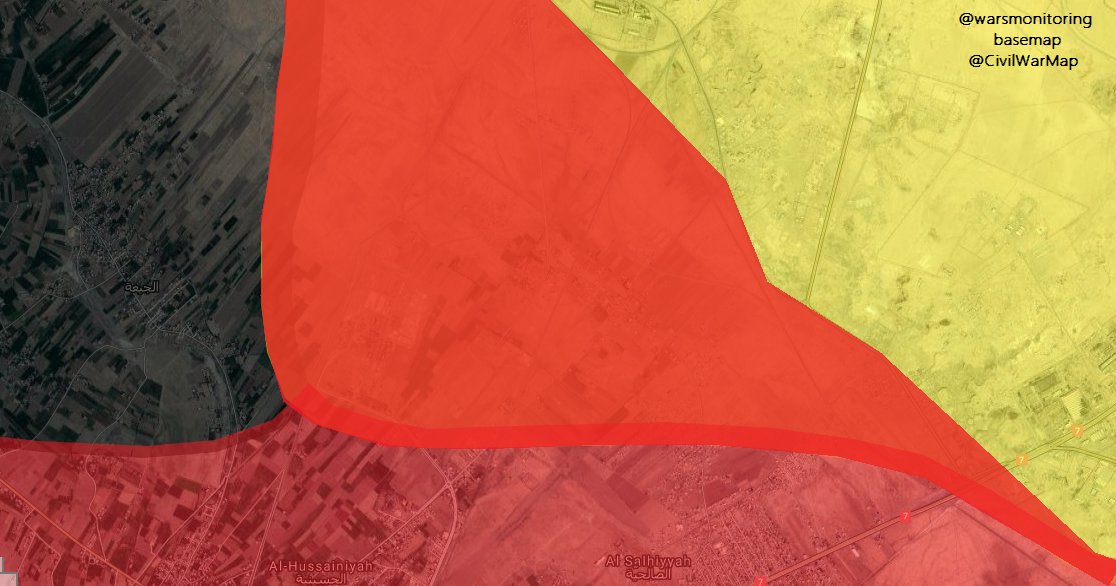 Lol this is geting beter and beter.

Abu Halwa need to be imprisoned.

Worth posting the content at that link, really important if correct

According to reports from Dier Ezzor , the Russian Forces have entered Koniko oil factories – witch are under SDF control – located in Eastern bank of the Euphrates River .

The Russian forces Have entered Koniko oil factories as part of a “reconnaissance mission”, those forces comes from the Russian Reconciliation Center in Hameemim .

This mission is part of an agreement being made in Qamishli between the Russians, Syrians and the Kurds , The field may be handed over to the Syrian government, reports said.

Earlier this Morning , a Russian political figure has arrived to Qamishli , and met Kurdish leaders ( According to SDF media )

Someone stirring this story again


The US faces a huge problem with dubious allies in its fight against the ISIS terror group, argues the Washington Institute’s Barak Barfi.

According to Barfi, many US-backed units resemble mercenary gangs who fight for power and control over Deir Ezzor oil and gas fields and other material resources.

Before becoming a militia leader, Al-Dayri was frequently arrested for stealing motorbikes. When the Syrian conflict broke out, he started a road gang, ran a smuggling circle and later joined ISIS, pledging loyalty to the terror group in 2014.

In 2016 Al-Dayri reappeared as the leader of Deir Ezzor Military Council. It is unclear who operates in its ranks: Al-Dayri himself said that many tribesmen joined the Council, mentioning Jabbour, al-Ukaydat, al-Muamara and al-Mushahada tribes, while some fighters came from Elite Forces associated with former National Coalition President Ahmed Jarba and others from Ahrar al-Sham Salafi group.
https://smmsyria.com/2017/10/19/motorcycle-thief-leads-us-backed-forces-in-deir-ezzor/
JohninMK

Couple of weeks old but good Gif at link as the Russians? move on 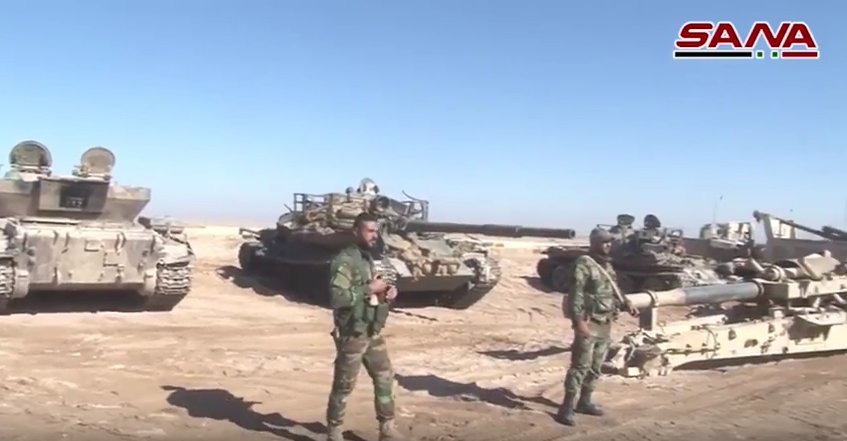 Looks good for second river crossing, pictures from captured village at link. Might be just recon in force

Looks like the Arabic RT Syrian reporter was correct. Shin a.m. was captured days ago after #SAA crossed Euphrates near Mayadin

Russian President Vladimir Putin and his Israeli counterpart Benjamin Netanyahu held a telephone conversation during which they discussed the Syria issue, the situation surrounding Iran’s nuclear program and the results of the referendum in Iraqi Kurdistan in a telephone conversation, the Kremlin press service said in a statement.

"There was a thorough discussion of ways to resolve the Syrian crisis, the situation surrounding Iran’s nuclear program and the results of the referendum in Iraqi Kurdistan," the statement reads.

The Kremlin revealed that the telephone conversation was initiated by Israel.
JohninMK

Bit more on today's Syria/Russia/PKK meeting. I'm sure it should be Conoco

The three main issues that were discussed at the meeting were the future of the YPG, the future of US bases, located in the YPG-occupied areas, and a political solution to the Kurdish question in Syria.

The first solid step was already taken by the YPG as the group decided to hand over the control of Konoko gas company to the Russian forces in the eastern province of Deir Ez Zour.

A Chechen advisor was also present at the meeting, in particularly with the purpose to discuss extradition and other things related to Chechen terrorists in northern Syria.

Deir Ezzor Province – The Syrian Observatory for Human Rights: the Syrian Observatory for Human Rights learned that violent clashes are taking place between the regime forces and militiamen loyal to them of Syrian and non-Syrian nationalities against the members of the “Islamic State” organization, in areas in the eastern countryside of Deir Ezzor, and the Syrian Observatory for Human Rights monitored the clashes between the both parties which are taking place in the vicinity of Ziban town on the eastern banks of the Euphrates River, at a distance of several kilometers away from Al-Omar oil field which is the biggest oil field in Syria, and the clashes are accompanied by intensive shelling by the regime forces on the clash areas in an attempt to take the control of Ziban town, and information about casualties in the ranks of the both parties, and the sources confirmed that the crossing took place through water bridges between the western and the eastern banks of the Euphrates River.
calm

Al Abadi in Iraq by his courageous move this week, in taking the Kurdish movement head on and effectively rolling back their border and their economic capability, has changed the whole outlook for the region, giving all the sovereign countries a huge confidence boost. There is even a possibility that peace might rear its head.

With those successful actions the prospect of an Iraqi based Kurdistan seems to have moved into the distant future. Given its much weaker economic position that has also inevitably changed a potential Syrian Kurdistan from possible to remote.

That new reality seems to be rapidly striking home with the Syrian/Russian/PKK meeting this morning looking like it led to a takeover by Russian/SAA forces of the Conoco plant and related assets east of Deir this afternoon. If this is an indication of the future I can't see why the Kurds would want to lose more of their SDF soldiers fighting ISIS in the Arab areas east and south of Deir when the long term beneficiary will be Damascus not them. Why not leave them to the tender mercies of the SAA?

Whilst Russia looks to be emerging with a key role, the US will be forced to reconsider its presence in Syria because it has now become virtually meaningless. The US forces are in al-Tanaf without any strategic purpose and in al-Hasaka/Raqqah with the Kurds it has now defeated ISIS in its Syrian capital and is just left with mopping up the remains. In fact, it is possibly easier for the Syrian Kurds to give up this alliance before US drops them. Kurdish interests don’t lie with Washington but with Damascus, ready to establish a constructive dialogue with them if they stop being seduced by the US’s temporary interest in the Levant. The first moves in this perhaps took place today.
JohninMK

On Thursday, the US-backed Syrian Democratic Forces (SDF) crossed the Khabur river in the northern Deir Ezzor countryside, and captured Gharibah Sharqiyah and Jasimi villages on the eastern bank of the river, according to Kurdish sources.

Furthermore, the SDF announced that its fighters repelled an attack of ISIS on its positions around Abu Kashba village in the northwestern Deir Ezzor countryside.


In the south east

Fighting has commenced in Iraq as well (see Iraqi thread)...I wonder if it's coordinated
JohninMK 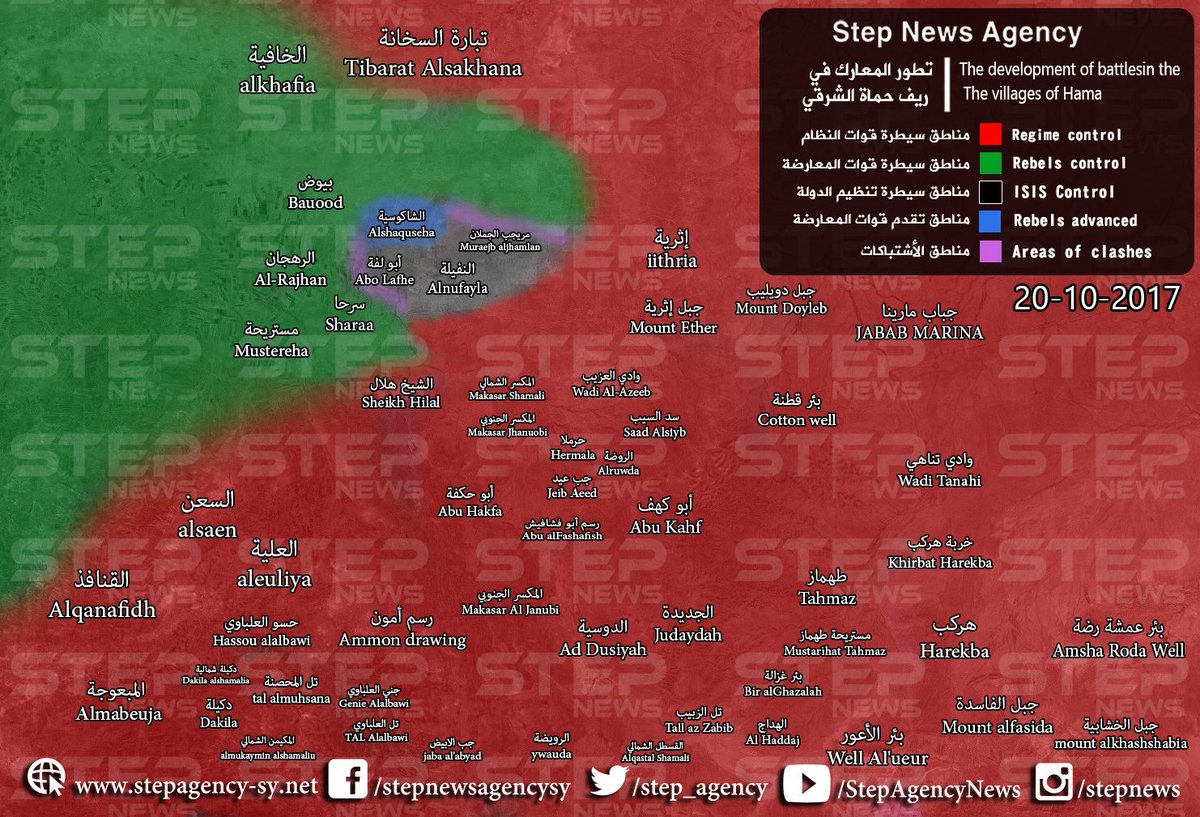 Iran getting ready for the next phase in the north?

BEIRUT (Reuters) - Iran’s military chief of staff visited a frontline position near the Syrian city of Aleppo, a military news outlet run by the Lebanese group Hezbollah reported on Friday, during a visit that has underlined Tehran’s deep military role in Syria.

General Mohammad Baqeri visited the position with a number of Iranian officers, according to the report, which was accompanied by photos showing Baqeri looking at a map and peering through binoculars.

Neighboring Israel has expressed deep concern over Iran’s role in Syria, where Iranian fighters and Iran-backed groups such as Hezbollah have played a major role fighting in support of President Bashar al-Assad.

Baqeri met Assad on Thursday during a visit to set out a joint military strategy, Syrian state media reported.

Baqeri has warned Israel against breaching Syrian airspace and territory and pledged to increase cooperation with Syria’s military to fight both Israel and Sunni jihadist militants.

Israeli Prime Minister Benjamin Netanyahu has said that Iran is strengthening its foothold in Syria, warning that Israel would “do whatever it takes” to protect its security.

Helped by Russian air power, Iran-backed groups including Hezbollah played a major part in the Syrian government campaign to recapture eastern districts of Aleppo city from Syrian rebels last year. Rural areas to the south and west of the city are still in insurgent hands.

Pretty interesting analysis of Israel vs Lebanon/Syria. This is a para from it

The first message is obvious: in any new confrontation or war between Hezbollah and Israel – said the source –, the sky over Lebanon and the borders with Israel and Syria will form one single front. The second message – and the most important one – is tells Israel that the Syrian Army is on a high about its victory: Russia secured deconfliction and de-escalation zones, al-Qaeda is contained for the moment, and ISIS (the “Islamic State” group) is left with a minute amount of territory, surrounded in the north-east along the Syrian-Iraqi borders.

Two Russian helicopters IDed as a K-50 attack helicopter and an Mi-17 transport helicopter. I suspect Turkish negotiators were on board.


The helicopters left from Turkish base at Sheikh Aqil. If Turkey wished to negotiate handover of Tel Rifaat this is what it would look like.

There are rumors that Turkish and Russian military committee met in Minagh airbase. Nothing official reported for now.

Although it hasn't been fully confirmed its good news if true.

I'm just going to say outright that we are not being told everything, which is obvious. The whole SDF thing so far like something out of a bad soap opera.
JohninMK

On Friday, ISIS fighters withdrew from the strategic Omar oil fields in the southeastern Deir Ezzor countryside after planting dozens of IEDs and mines inside them, the Syrian Observatory for Human Rights (SOHR) reported.

The report added that ISIS withdrew after the Syrian Arab Army (SAA) captured Dhiban village west of the Omar oil field. The SOHR also said that Russian airstrikes on ISIS positions inside the oil fields played a key role in the ISIS decision to withdrew from them.

Moreover, some Syrian pro-government activists reported that the SAA already captured the oil fields. However, these claims are not confirmed yet.

Meanwhile, Syrian opposition sources claimed that the US-backed Syrian Democratic Forces (SDF) are also advancing towards the Omar oil fields. According to the sources, the SDF is now in only 8km from the oil fields. Due to the large size of the oil fields, the SDF might capture a part of it, even if the SAA captures the main oil facilities.

If the SAA captures the Omar oil fields, the tension between it and the SDF will likely decrease. However, there is no doubt that bad relations between the SAA and SDF will be one of the main issues in the post-ISIS era.

miketheterrible wrote:I'm just going to say outright that we are not being told everything, which is obvious. The whole SDF thing so far like something out of a bad soap opera.

Actually suspect it is the same party that meet earlier with the SDF on the east bank of the Euphrates. That included the Security head for the Syrian government, deputy Foreign Minister of Russia and a Chechen rep. Sounds like some shuttle diplomacy going on to cover the post ISIS era plus dealing with the issue of Russian and other Central Asians subjects fighting for ISIS, al qaida and other Islamic groups.
Sponsored content