JohninMK wrote:ISIS seem to be giving the SDF a hard ride in Raqqa.

If, as it seems, they believe they are going to die a martyr anyway, many perhaps seem to want to do it in a town they may have been in, perhaps with family, for a while rather than in a pickup in the middle of nowhere like they heard that others had, courtesy the RuAF not allowing free exit.
............

Also there seems to be some kind of jihadi apocalyptic prophecy related to Raqqa so that would also factor in. 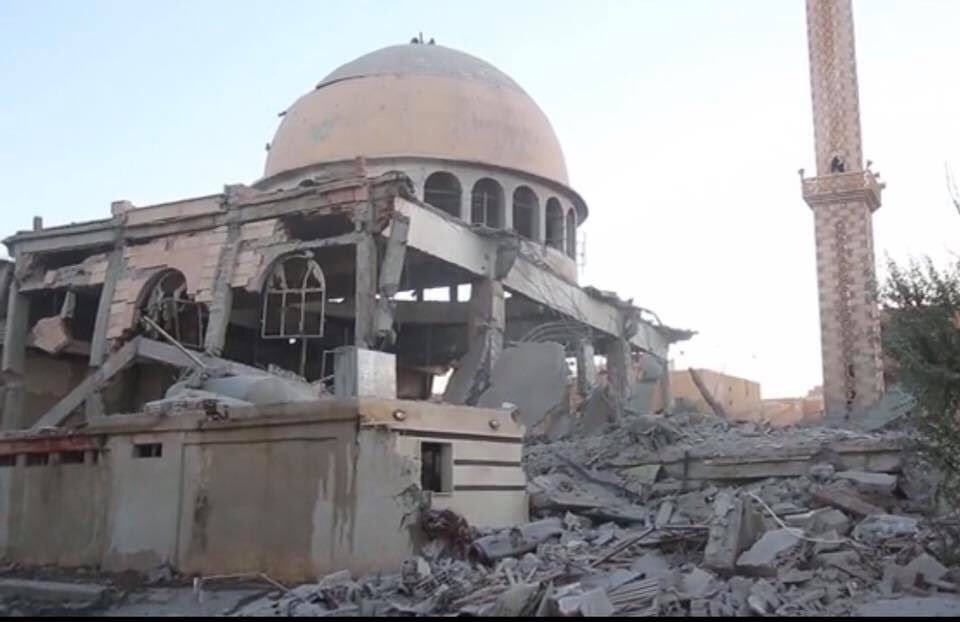 Having been outflanked plus Lavrov reading the riot act to Tillerson, maybe the Western SF are pulling out

JohninMK wrote:Collateral damage courtesy of the USMC and CoalitionAF of the AlNoor mosque and Amn AlDawla neighbourhood in Raqqa

Classic barrel bomb for sure. 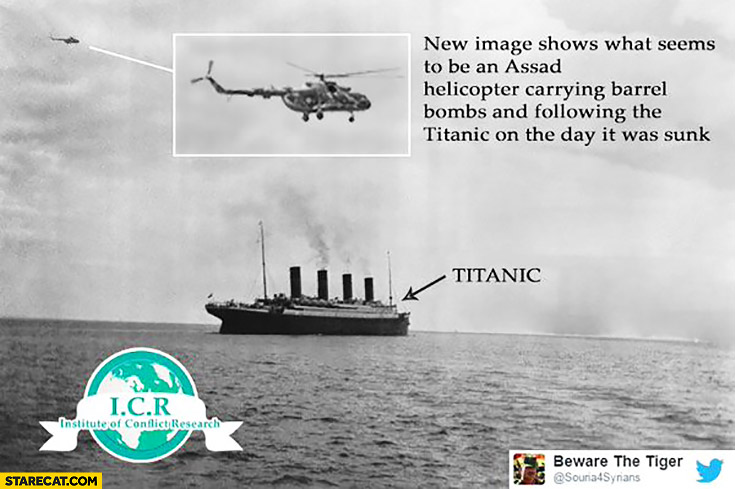 JohninMK wrote:Having been outflanked plus Lavrov reading the riot act to Tillerson, maybe the Western SF are pulling out

Just like teh evil Sovietz back in the early days of the German invasion.

Apparently, while part of the troops held down the militants in the area of El Tanf, another group [June 9, 2017] withdrew from central Syria to the Iraqi border to the north-east in the area of El-Buda. This can be seen on the map from our Defense Ministry briefing. Very serious development, but now we need to gain a foothold and continue. 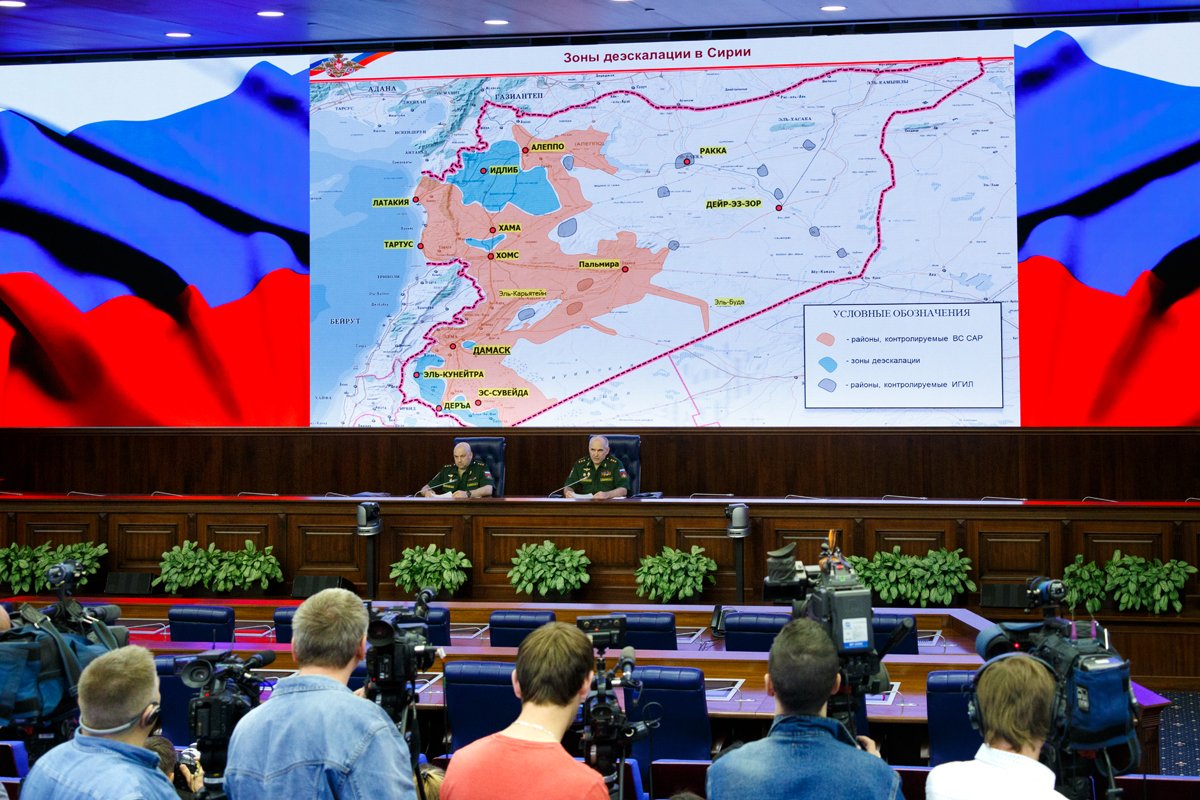 JohninMK wrote:Collateral damage courtesy of the USMC and CoalitionAF of the AlNoor mosque and Amn AlDawla neighbourhood in Raqqa

Classic barrel bomb for sure.

JohninMK wrote:Having been outflanked plus Lavrov reading the riot act to Tillerson, maybe the Western SF are pulling out

Just like teh evil Sovietz back in the early days of the German invasion.

Dammit you have revealed the true objective of the war, which is to steal Assad's time travel technology

The filming of Fur Columns [15th and 18th minutes] traveling towards Iraq confirm that the SAA has withdrawn to the territory under the control of the Iraqi government.

Please translate to English in future all foreign languages posted on this English language forum!

Surprised it took them so long to do this

JohninMK wrote:Surprised it took them so long to do this

The Turks are idiots, they should work with Russia, they will likely be pressured to open it again.
KiloGolf

Hear that? The sound of moderate basic b!tches foaming from their mouth 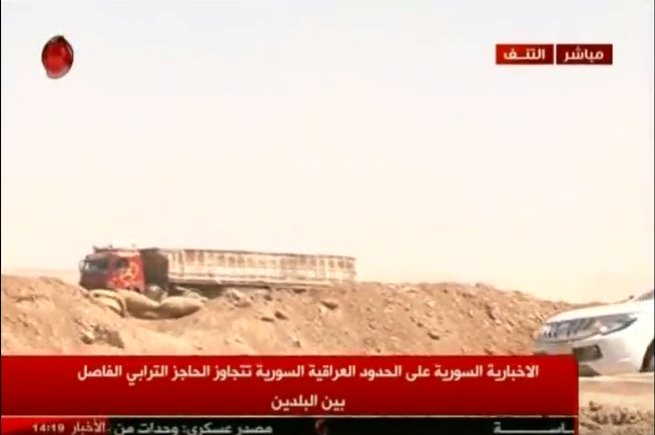 For the first time Since years , Transit trucks enter Iraq from Syria border

In what represents the biggest change to America’s use of force in Syria, U.S. forces have, on three separate occasions, struck Syrian government-allied militias. The incidents happened near Tanf, a border town seized by Syrian rebel groups trained in Jordan from the self-proclaimed Islamic State, or ISIL, in March 2016. In all three cases, we are told, the strikes were nothing more than force protection measures and didn’t signify a major change in U.S. policy. U.S. General Joseph Dunford, chairman of the Joint Chiefs of Staff, made this point on May 19, just one day after the first strike, telling reporters, “That was a force protection strike.  Our commanders on the ground felt like they were threatened at that point. And their rules of engagement allow them to do that.”

Yet, despite efforts to portray these strikes as one-off reactions to Syrian backed provocations, the attacks risk expanding the goals of the military campaign, currently aimed solely at defeating the Islamic State. America’s use of military force appears to be unfolding independent of any broader strategic or political guidance. It is not clear how these actions align with broader foreign policy goals. This lack of clarity allows tactical decisions (i.e., the need to protect U.S. forces) to dictate strategy. In this case, the purported link between the militias struck and Iran, the most important backer of Syria’s Bashar al Assad, risks a broader escalation — perhaps one that some hawkish voices in the Trump administration would welcome.

unbelievably short-sighted and pro-escalation content, some useful points to take home tho.


The United States has the capability to defend a garrison in the Syrian desert. However, the reasons for doing so are devoid of any purpose, making a simple cost benefit analysis all but impossible.

Apparently this guy wants US policy to get "perspective" by starting a brawl with Iranian elements within Syria (that invited these elements in the first place). Absolute insanity.

And now some good news: 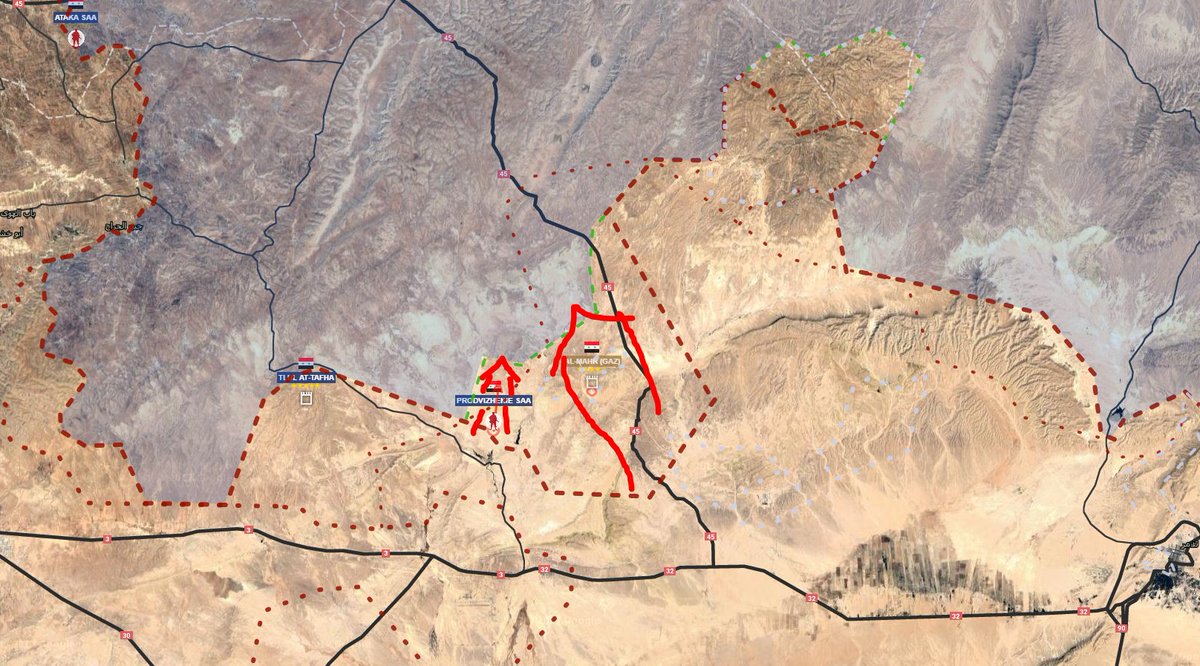 Led by their elite Tiger Forces, the Syrian Arab Army stormed a number of villages in western Al-Raqqa, striking the Islamic State’s weak defenses from the northern flank.

According to a military source from the Tiger Forces, the Syrian Arab Army liberated more than 15 villages in the Al-Raqqa Governorate after a fierce battle with the Islamic State.

As a result of today’s advance, the Syrian Arab Army has reached parts of the Al-Raqqa Governorate that they have not seen since their withdrawal from the area in early 2013.

There is a serious death toll going on in the SAA, many officers of all ranks are dying round the country. This is just the latest, shows a definite leading from the front.

Rushing to capture things will get them in really bad shape in long run. They need
to advance but with major priority in not losing soldiers. Because all those zone they capture can be reversed over night ,as we saw ISIS can do with lots of suicide bombers.
arpakola

The US is to blame for the rise of Al-Qaeda and its late mastermind Osama bin Laden, which it empowered to fight Soviet troops in Afghanistan, Vladimir Putin told Oliver Stone. Putin also said there is proof the CIA supported terrorists in Russia’s Chechnya.

In the first episode of Stone’s hugely anticipated Showtime series, which aired Monday night, the Russian leader reflected on the origin of Islamic extremist groups, including Al-Qaeda.

“Al-Qaeda is not the result of our activities. This is the result of activities of our US friends. This all started in the times of the Soviet war in Afghanistan, when the US security services supported different movements of Islamic fundamentalism in their struggle against the Soviet troops in Afghanistan,” Putin told Stone, adding that the “US side has nurtured both Al-Qaeda and [Osama] bin Laden.”

Washington should have foreseen that backing Islamists will backfire, with extremists eventually getting out of control.

“It always happens like this. Our US partners should have been aware of it. It is their fault,” Putin said.

Nevertheless, Moscow stood by the US’s side after the 9/11 terrorist attacks, claimed by Al-Qaeda. In a show of solidarity with Washington, Moscow decided to scrap the scheduled war games following the attack, Putin revealed to Stone.

“In these kind of situations the first persons are in need of moral and political support. We wanted to show that kind of support,” the Russian leader said.

CIA styled Chechen terrorists as ‘opposition’
Speaking to Stone, Putin accused the US of both openly cheering and covertly financing the Islamist militant groups in Russia’s North Caucasus republic of Chechnya during the two Chechen wars. Moreover, the president said there is evidence available that the Central Intelligence Agency (CIA) even admitted keeping in touch with the terrorists, styling them as the “opposition.”

“If we speak about a political support, there is no need in proving evidence. It has been done publicly, openly. And if we speak about urgent financial support – we have such evidence and furthermore have already provided it to our US colleagues,” Putin said.

Putin revealed he confronted George W. Bush about the CIA supporting Chechen militants and got a response from Bush that he would “deal with it.”

Later, however, Moscow got a letter from the CIA through “partner channels,” which suggested there will be no change in policy on the issue.

“Indeed, we have later received via our partner links a letter from the US CIA, which said that our colleagues consider that they have a right to maintain relations with all the representatives of the opposition and would continue to do so. It was obvious that it was not only about opposition groups, but about terrorist groups and organizations,” Putin said.

Touching on the issue of the current state of the US-Russian relations, Putin said that if the US strategy toward Russia is indeed focused on disrupting its economy and toppling its government to get hold of its vast nuclear stockpile, then it is incredibly shortsighted.

“I think that it is a wrong policy exactly because such understanding of relations with Russia is not aimed at future. People, who think like that, do not see further than 25-50 years ahead,” Putin said, adding that attempts to turn Russia state into a vassal state will inevitably backfire.

The Russian president argued that the US has “got a false sense that it is able to do everything without any consequences,” in particular after the Soviet Union’s collapse.

“In such a situation, a man or a country begins to make mistakes… The state begins to function ineffectively. One mistake follows another. That is the trap in which, as I believe, the United States got caught into,” Putin reflected.

Iran’s Supreme Leader, Ayatollah Ali Khamenei, has claimed Washington is lying about fighting terrorism in the Middle East, saying US activity has instead given rise to Islamic State. Tehran’s foreign minister says the US has not honored the nuclear deal.
"You [the United States] and your agents are the source of instability in the Middle East... Who created Islamic State? America ... America's claim of fighting against Islamic State is a lie," said Khamenei, the hardline Iranian leader known for his sharp anti-American rhetoric, addressing senior Iranian officials on Monday.

Weighing on the chances of Iran-US relations improving, Khamenei said there was hardly any room for rapprochement, arguing that Washington is against the very idea of “an independent Iran,” Reuters reported.

“America is a terrorist country and backs terrorism... therefore, we cannot normalize ties with such a country,” Khamenei said.

It comes as relations between Tehran and Washington have grown increasingly strained, most recently overshadowed by a string of allegations made by a number of high-ranking Iranian officials claiming the US had forged an alliance with Islamic State (IS, formerly ISIS/ISIL).

On Sunday, Deputy Chief of Staff of the Iranian Armed Forces, Major General Mostafa Izadi, claimed Tehran had obtained “documents and information” that purport to prove that Washington has been directly supporting IS to wage “a proxy warfare in the region.”

Earlier, Iranian Parliamentary Speaker Ali Larijani accused Washington of being an ally of Islamic State in the region.

If you can't be bothered translating then don't bother posting in the first place. 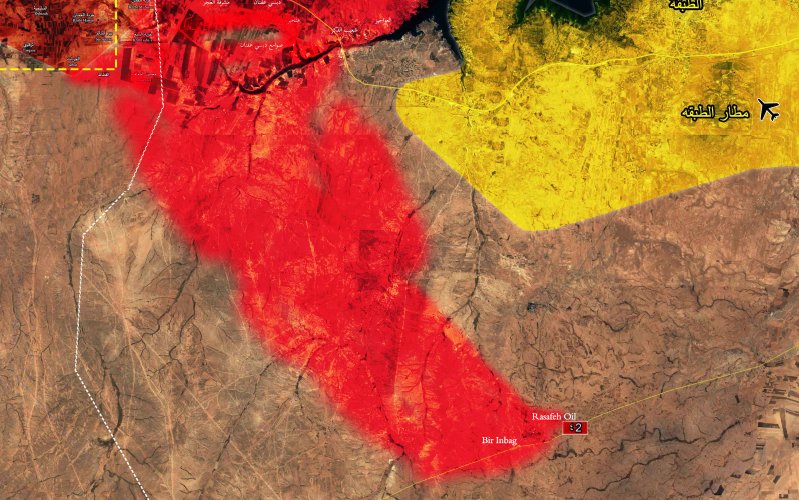 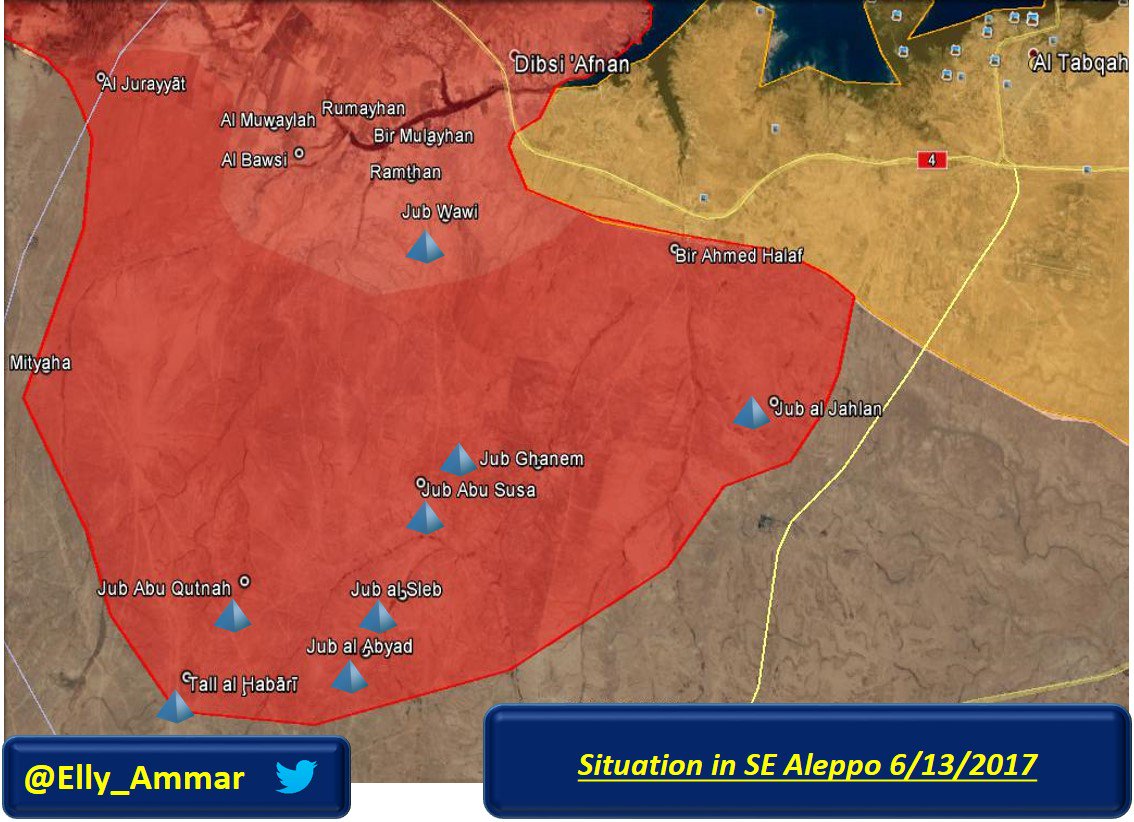 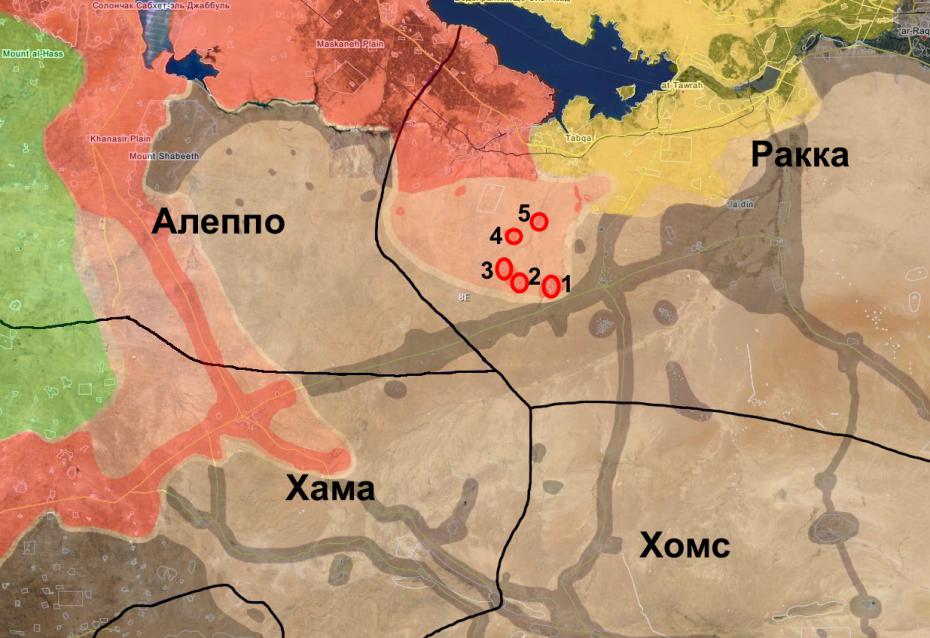 Led by their elite Tiger Forces, the Syrian Arab Army liberated several villages in the western countryside of Al-Raqqa, yesterday, paving the way for their rapid advance to the key oil field of Rusafa this morning.

According to a source from the Tiger Forces, the Syrian Arab Army reached the Rusafa Junction earlier this morning before they reached the town itself.
The source added that all of the area west of the Rusafa Oil Field has been liberated, along with the town; however, the army has yet to enter because of potential hazards like IEDs planted by the retreating terrorists.

As a result of today’s advance, the Syrian Arab Army has reached the Syrian Democratic Forces’ (SDF) lines around Tabaqa, marking the first time in nearly three years that they have had any presence in this area.
Sponsored content