Our friend Carlos Kopp is probably the best western source for such info, but in his pro F-22 and anti F-35 POV often potential becomes fact rather than substantiated fact.

Generally his technical information is actually very good and why I read it, but much of what he talks about is speculation.

ie you will find he mentions past history of a certain practise... like IR and SARH missiles used together in Soviet and Russian aircraft and then talks about IR and ARH models of R-77, without any other proof of their existence.

Certainly they used the IR seeker from the R-73 in the R-27T and R-27ET, and it would be logical if they produce a lock on after launch IIR seeker that fitting it to the R-77 and R-77M as well as their very long range missiles would make a lot of sense, but there is no evidence they are doing this... or course there is no evidence they aren't... the first news about passive radar homing versions of their AAMs that could home down the pencil beam of a enemies fighter radar... for instance for a Sparrow to have any chance of a kill then the launch aircraft (say F-15) needs a lock on the target before launch and all the flight time of the missile to impact... an R-27EP could use its much greater launch range than any model Sparrow, and also much higher average flight speed to hit the F-15 before the Sparrow hits its target... and do it totally passively. The first news about such a missile was revealed well after it was in operational service (ie 20 years after).

Here is as good as any place to start http://www.ausairpower.net/rus-weps.html
Sujoy

I've been looking for information on possible upgraded variants of r27 family.

eridan wrote:I've been looking for information on possible upgraded variants of r27 family. Does anyone have a link to some good, official material concerning that matter? I am talking about information on upgraded electronics within the missile, not a completely different sort of seeker or engines etc.

The R-27 missile, produced by Ukrainian firm Artem, comes in infrared-homing (R-27T), semi-active-radar-homing (R-27R), and active-radar-homing (R-27AE) versions.
Russian firms still supply some components for R-27 missile.The R-27R has a range of 50-60 kilometers while R-27EM, which is likely to be used on MiG-29K, is a naval variant with a range of up to 170 kilometers under optimal conditions.The R-27Ps seeker head is interchangeable with the R-77s.


According to the PLAF :


The missile is guided to the target by a combination of different methods to provide reliable
target lock-on at long ranges from the carrier aircraft. Initially the missile is guided by
inertial guidance, with radio midcourse correction command. In its final stage of flight,
the missile switches to semi-active radar-homing mode, or active infrared-homing mode depending
on the type of the seeker. The missile can be guided along special trajectories to create
favourable conditions for homing head and proximity fuse operation. It is also capable of going
around a plume of passive jamming, of being moved out of the main lobe of the platform's radar,
and approaching a low-flying target from above at a given angle.

The R-27EP (AA-10 Alamo-F) missile has ARM capability and a range of 110 kms. The R27EP uses the 9B 1032 passive anti radiation seeker developed by CKBA. This operates at centimetric wavelengths, and guides the round to the radar of enemy fighter aircraft.

The seeker is not different technologically from the Kh-31PD and Kh-38UShKE passive seekers since the developer is the same. The difference is that R-27EP1 has no inertial gyro system. So, the range of the missile and lock on range - both must to be 110 km from frontal hemisphere (for fighter with radar). However, for targets like AWACS it could be different, but is not important since the propulsion is limited by 110 km only.The seeker is a broad band, working in 1.2 - 11 GHz . So, the fighters with AESA radars cannot escape either.
indochina

Why are there so many variations of R-27?:

The difference here is what?
SOC

R-27TE: if after the guidance designator, the E means export model

R-27T1: the 1 just means an incremental update. No different from saying AIM-120C-7, for example.

Also, not all of these are actually in-service models, either.
indochina

R-27EP. Always seemed like a beast to me. Any additional info on the weapon and its use are welcome.
GarryB

If you want to be precise the PVO R-27s were not compatible with the Frontal Aviation R-27s and had different IFF codes and guidance algorythms for hitting larger heavier targets like bombers.

Not sure about the codes given to them but there were also models of the R-27 specifically designed for the older generation fighters like the Mig-23-98 and Mig-21-98.

They also had special variants of the R-27R and R-27ER for use over water by Mig-29K and Su-33 aircraft.
indochina

R-27ER1 is a late model SARH long burn model of the Alamo and was in service for the 1990s and 00s of this century and is in service now... though the introduction of new and upgraded aircraft able to use R-77 will change this over time.

R-27EP1 is the late model passive homing long burn model of Alamo and is also in service...

R-27PE1 would be an exported passive model standard burn missile... unknown as to whether it was exported.

R-27RE would be missile sold with Warsaw Pact Mig-29s as standard BVR missile.

BTW I should point out that the Passive radar homing R-27s were intended for use against western aircraft launching Sparrows and similar SARH missiles.

Say an F-15 detects a Mig-29 and immediately launches a Sparrow missile to intercept it... the Mig pilot can lock on an launch an R-27EP that tracks the radar signal from the F-15 painting the Mig and then launch their missile and turn... the large rocket motor of the EP gives it a higher flight speed than the Sparrow so unless there is a very long delay the R-27 should hit the F-15 before the Sparrow hits the Mig. If the F-15 spots the incoming missile and breaks their radar lock to manouver then both missiles will likely miss.
They were in service in the 1990s yet kept secret all the 1990s.

AFAIK they could not be used against ground targets...
mack8

I wonder if more knowledgeable folks can help me. I find it rather confusing to sort out the new generation R-73s. First, anyone knows what is the izdeliye number of the basic R-73?

As of now there are 3 izdeliye numbers vehiculated. First the Izd. 740 apparently refers to the abortive upgrade in the nineties (K-74M/ME?). Next in line is the Izd. 750, which as shown above passed state tests October last year. My interpretation is that this missile is the domestic variant of RVV-MD (again K-74M like 740? the russians don't shy from using the same designation twice- is that the case here?), basically a re-modernization with current tech of the Izd. 740. Finally we have Izd.760, which should begin testing apparently in 2014-2015. THIS is supposedly the LOAL missile for PAK-FA and not 750 as alluded on some places the net, right?

Now, am i anywhere close to the real story, or perhaps i've completely lost my mind? Thanks!
Austin

My vote Austin. So:


Next product - missile "air-" long-range HAEDAT designed to engage aerial targets - fighters, attack planes, bombers, aircraft BTA, helicopters, cruise missiles - at any time, at all angles, under RAP on background land and water surfaces, including multi-firing on a "fire and forget". Generally it is a unique product. In the export version has a range of 200 km starting. Allows very efficient air battles outside the affected areas of the enemy weapon


The main requirements are to ensure the application (start) from outside the reach of enemy air defense, as well as the implementation of the principle of "fire and forget". A feature of modern TSA requirement is to place them in the inner compartments fighter. This affects not only the dimensions of weapons, but also involves the need to ensure the targeting on the trajectory after the start (and not on the suspension, as was done previously

3. Dozens of new weapons will be introduced for air force and navy

This affects not only the dimensions of weapons, but also involves the need to ensure the targeting on the trajectory after the start (and not on the suspension, as was done previously

So they are clearly talking about compact weapons designed for internal carriage and lock on after launch capabilities.

It is important to remember that slim control fins allowed three R-37Ms in each row on the belly of the MiG-31M, so this new missile design might also be able to be carried in larger numbers too.

For shorter ranged weapons that might mean alternative mounting options including more than one missile per pylon.
Austin

HAEDAT? Must be the translator, in the article it says "long range missile RVV-BD".
Viktor 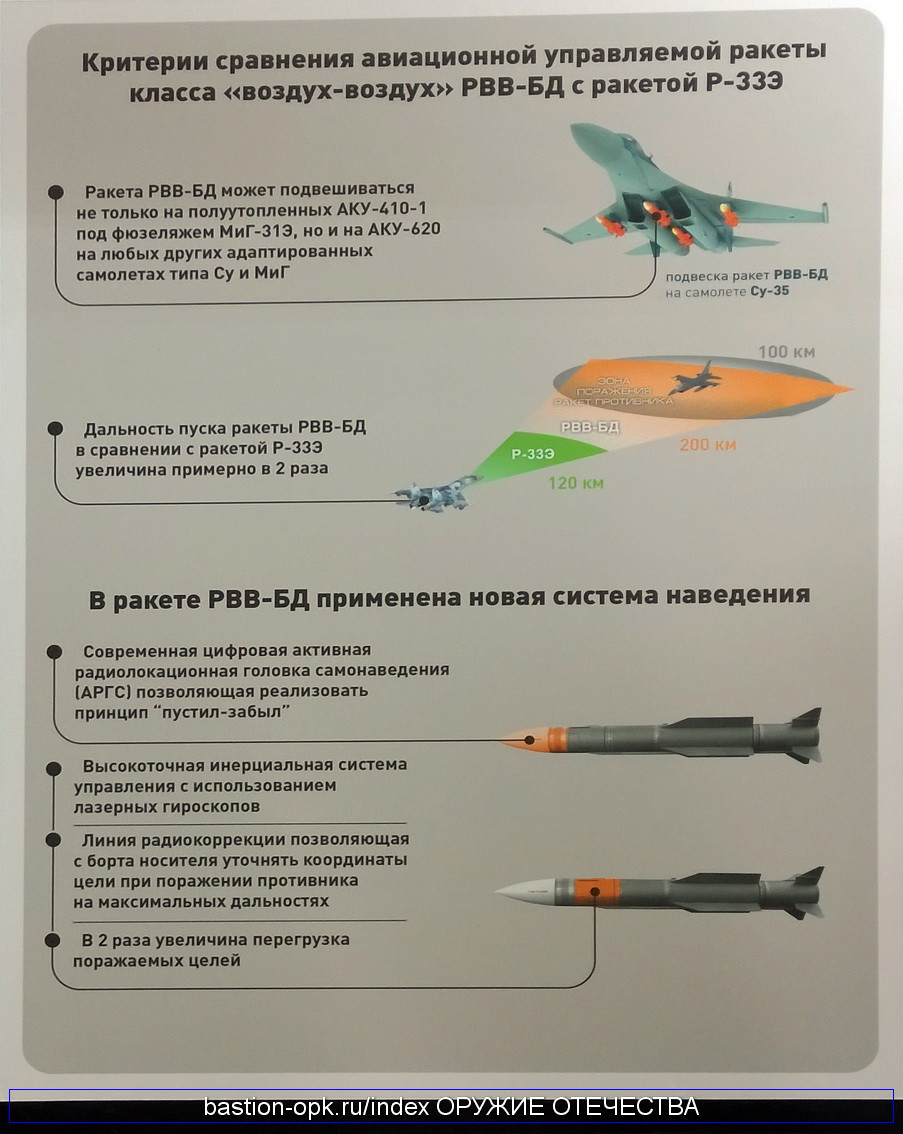 Interesting, I'd love to see it translated.

Viktor wrote:Lots of new stuff will be coming out in the next few years as whole new generation of Russian air to air and air to ground missiles are being designed and revealed


Launching distance of missile RVV-BD compared with R-33E is about 2 times greater.

High precision inertial guidance due use of laser gyroscope.

Line of radiocorrection can be provided from launching plattform by providing coordinates of the target to enhance fire solution in advance of engagement for maximum engagement range.

I think it is good enough to understand, but not perfect.
TR1

Werewolf translated it all correctly.
mack8

Could that be taken as confirmation that Su-35 can carry 4 RVV-BD? 200km range, active radar seeker, 8g capability, quite a headache to any potential opponent.

mack8 wrote:Could that be taken as confirmation that Su-35 can carry 4 RVV-BD? 200km range, active radar seeker, 8g capability, quite a headache to any potential opponent. Smile

If China or another nation will do not place an order of Su-35 or any international buyer will order MiG-31E we will not see confirmed any aircraft equiped with RVV-BD (the same was obviosuly true for R-33E).
Viktor

mack8 wrote:Could that be taken as confirmation that Su-35 can carry 4 RVV-BD? 200km range, active radar seeker, 8g capability, quite a headache to any potential opponent.

This is an export model. Domestic one probably goes even further.
medo

The RVV-BD does have a 200 km range, domestic models are said to be 300+ km.
Sponsored content