Just as importantly a target penetrating Russian air space had better not fixate on those interceptors coming up to meet them as the radar and radio silent SAM site they just flew over could launch a missile from behind them with no emissions at all.

More importantly such networking means IIR guided missiles with very long range can be launched towards a group of enemy aircraft and it can use an onboard 3D IIR database of aircraft and it can fly all the way with its eye open looking for IR signatures that match those in its database... when it finds an enemy aircraft it can choose to attack it itself or continue on to other targets.

Imagine a pre-emptive attack where a conflict on the ground starts so a Russian response could be to launch a few 400km range missiles into the enemies airspace before, during and after an airstrike to deter the enemy from interfering with the aircraft on the strike mission...
Admin

Tunguska india wrote:Can anyone please enlighten me on Novator K -172 range ,Guidance system? as i did not find any information in indian sources.

I would except for the fact work on this concept was ended like a decade ago.

And one more curious question.. has the VVS procured RVV-AE or perhaps the RVV-SD ?
GarryB

RVV-AE is an export only item.

A while back there was a contract for a large supply of what was described as 14 new precision guided weapons, and I rather suspect that included RVV-SD and RVV-MD.

Previously there was little need for ordering the R-77 in large numbers because only the Mig-29S was able to use it... as numbers of Su-34s increase they will need missiles too.

No other aircraft in service in significant numbers could carry and use the weapon so there was little point in spending money on them.

I have seen several live weapons on Su-35s for testing.

The plans for Yak-130s with a nose mounted radar will also likely lead to it carrying such weapons too.
TR1

Pretty much what Garry said, I suspect we will see number ordered soon for the new birds.

Unfortunate that none have been seen used on the MiG-29SMTs @ Kursk yet...
GarryB

And one more curious question.. has the VVS procured RVV-AE or perhaps the RVV-SD ?

It is very likely that they will have them at their training and testing facility, they will have the first few batches sent there for testing... I have seen photos of RVV-MD missiles being tested on Su-35s, and it is rather likely they will also be testing them on Mig-29SMTs now too.

Once they have cleared testing they will likely release them to service units, but I suspect they will have enormous stocks of R-73 and R-27 missiles that they will want to use up in training and exercises.

Remember the new RVV-SD and RVV-MD are new digital models of improved performance and in many ways can be considered as different from the older missiles as the Su-35 and Mig-35 are from the Su-27 and Mig-29 respectively.
KomissarBojanchev

Does anyone have an idea what will be the max G load of this AAM?
GarryB

It is supposed to be able to hit 8g targets and a general rule of thumb is about 5-6 times the target g, so in the 40-50g range perhaps.

Doesn't sound that impressive compared to some small short range AAMs but that is quite a lot of force for a mach 5 plus flying object.
SOC

GarryB wrote:It is supposed to be able to hit 8g targets and a general rule of thumb is about 5-6 times the target g, so in the 40-50g range perhaps.

Doesn't sound that impressive compared to some small short range AAMs but that is quite a lot of force for a mach 5 plus flying object.

Three-plane (i.e. 3D) maneuver = roughly three times the maneuvering capability of the target. Want to hit a target at 8gs? You need 24gs to maneuver with. More is always better but 24gs is the minimum you need to counter an 8g target effectively. I think we used to call that the rule of three or something equally obvious.
GarryB

But g increases with speed... so with higher speed interceptors the g load of any particular turn rate increases.

Of course a large directed warhead can reduce the amount of manouverability required for a kill and precision target tracking and side thruster rockets to shift the missile closer to the target in those last few mili seconds can also make a huge difference too.

Briefly, it says the state tests were passed on the 3rd of October

Now let's wish it would be fielded

I would assume so as well, is there any information out regarding it if any at all? what will be its improvements?
Austin

I would assume so as well, is there any information out regarding it if any at all? what will be its improvements?

I would assume so as well, is there any information out regarding it if any at all? what will be its improvements?

Ah as expected only a litle bit most intresting hopefully more will be revealed by time, thanks for linking mate.


I do wonder if the speed of the RVV-MD has been increased over its former "versions" seeing new NATO/European/Israeli/Japanese ones are around 2.9 mach+? but their ranges are considerably shorter, perhaps around the half of the RVV-MD.
Mindstorm

The news refere to final test of the domestic version of R-74M; moreover the evolutionary pact established for the "close range" missile (even if the meaning of close range will be very different for the final missile....) to be integrated in PAKFA/FGFA - R-74M missile is only intended for transitory adoption on advanced tactical aircraft - include the completion of work and tests on at least two superior products.

I think what the lease a new WVR AAM from Russian stable needs is a FPA/IIR seeker and two way datalink that would make it comparable to something like Python-5/MICA-IR or AIM-9X.

Most certainly a longer range which was tradationally the case with Russian WVR AAM will be hepful , 40KM as with RVV-MD should more than suffice.
GarryB

I think what the lease a new WVR AAM from Russian stable needs is a FPA/IIR seeker and two way datalink that would make it comparable to something like Python-5/MICA-IR or AIM-9X.


Most certainly a longer range which was tradationally the case with Russian WVR AAM will be hepful , 40KM as with RVV-MD should more than suffice.

I rather suspect the Morfei will be a smaller lighter missile than the R-73/74 and will most likely have a much shorter flight range.

It will also very likely have a secondary anti missile capability so Flankers going up against F-22s might be able to out gun them directly by taking lots of missiles up to the fight.

I also suspect that when the QWIP based sensors are in full production (they are already licence producing them for the new Catherine XP cameras) and the price comes down they will be able to fit them in thermal and optical frequency ranges that will allow light weight and cheap fire and forget optically guided weapons including ATGMs (Baikal?) and HERMES as well as weapons like the Kh-25 for a small light cheap air to ground missile.

The Morfei will likely be optimised to be as small and compact as possible for internal carriage, which of course introduces the potential as a UCAV weapon and of course helicopter carriage.

In naval use it will likely become a CIWS missile option for all sorts of vessels as its lock on after launch and fire and forget capability would make it an ideal way of dealing with swarm attacks under heavy ECM.

For lighter units (ie VDV) a light vehicle with a rear cabin packed with vertically oriented missiles ready for launch with a roof mounted 360 degree FPA/IIR sensor would make for a very potent fast reaction system for all services.

The current modern threat from NATO is based on the fact that a precision guided weapon can bring a conventional warhead so close to a small target that is effect could previously only be achieved through the use of nuclear weapons. With a point defence missile like Morfei that can engage that incoming missile away from its intended target restores a level of protection for Russian assets that means to effectively defeat them you need to resort back to nuclear weapons, which of course returns the status quo to suicide... which is where we all like it.

Apparently the K-74M does everything they hoped it would do. All other SR AAM projects were reportedly closed a couple of years ago...even a Ukranian project
GarryB

K-74 was the R-73 with a new seeker and real thrust vectoring gimbelled exhaust nozzle, instead of the simpler and easier deflection paddles used in the R-73.

The missile the Ukrainians were working on, as a new Soviet AAM missile looks like this: 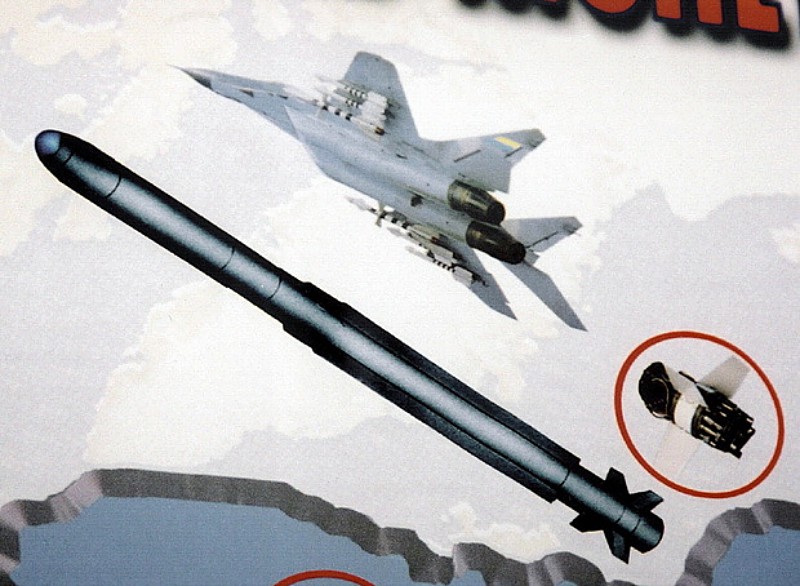 Whereas this is Piotr Butowskis chart of future Russian AAMs: 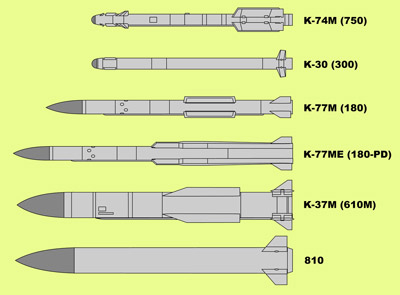 The K-74 lacks lock on after launch capability, which means it would not be much use for the PAK FA because missiles in internal weapon bays don't have a great view of the world to get a lock.

Russian technology in the area of video based auto tracking systems should enable lots of capability in lock on after launch performance, as well as IFF and threat assessment. A 3D threat library should allow the missile to detect and identify targets for itself.

Equally the small diameter ARH seeker shown by the Russians should allow an ARH model of K-74 for small aircraft and UCAV use.
Austin

I've been looking for information on possible upgraded variants of r27 family. Does anyone have a link to some good, official material concerning that matter? I am talking about information on upgraded electronics within the missile, not a completely different sort of seeker or engines etc.
Sponsored content