BMP-1 and BMP-2 in Russian Army

Against the background of the current situation in Afghanistan, despite all the promises of the Taliban (the movement is prohibited in Russia), the Russian Ministry of Defense decided to strengthen the 201st military base in Tajikistan. According to the commander of the Central Military District, Colonel-General Alexander Lapin, the base's motorized riflemen will receive a batch of BMP-2M.

As part of the reinforcement, as well as to replace the already obsolete models of equipment, motorized rifle units of the military base will be armed with 17 BMP-2M infantry fighting vehicles. The equipment will be delivered to Tajikistan by military transport aircraft by the end of July. It is planned that the new infantry fighting vehicles will significantly increase the combat capabilities of the Russian military base.

BMP-2 is one of the most massive infantry fighting vehicles. It was put into service in 1980 and produced until 1990. Currently, the Russian army is in service with more than 5 thousand BMP-2.

In the course of modernization to the level of BMP-2M, the vehicles receive the latest devices for "panoramic" aiming and observation, which have the functionality of night vision, and a new radio station is installed. The vehicle is equipped with a two-seat combat module "Berezhok", which is a classic BMP-2 turret, but with new weapons.

The BMP-2M is armed with Kornet anti-tank guided missiles, a 30-mm automatic cannon, a 7.62-mm machine gun and an AG-30M 30-mm automatic grenade launcher with an independent vertical guidance drive and a 300 grenade feed magazine.

NOTE: there were also reports last year that some BMP-2M's had been deployed here. Perhaps this will complete a battalion??

Batch of upgraded BMP-2M entered service with the motorized rifle brigade of the Western Military District.

A batch of upgraded BMP-2M infantry fighting vehicles with the Berezhok combat module entered service with the motorized rifle brigade of the Western Military District. This is reported by the press service of the Ministry of Defense.

According to the report, the motorized infantry units stationed in the Leningrad region received 10 upgraded BMP-2M vehicles. It is noted that the equipment was delivered as part of the state defense order. The press service of the Western Military District explained that by the end of the year, the district will be replenished with another 30 BMP-2M, but they did not specify in which parts they will be delivered.

The BMP-2 is the most massive infantry fighting vehicle adopted by the Soviet and Russian armies. Currently, BMP-2ms are being delivered under a contract signed last year to upgrade 124 BMP-2s to the BMP-2M level, and the contract is due to be completed by the end of 2022. 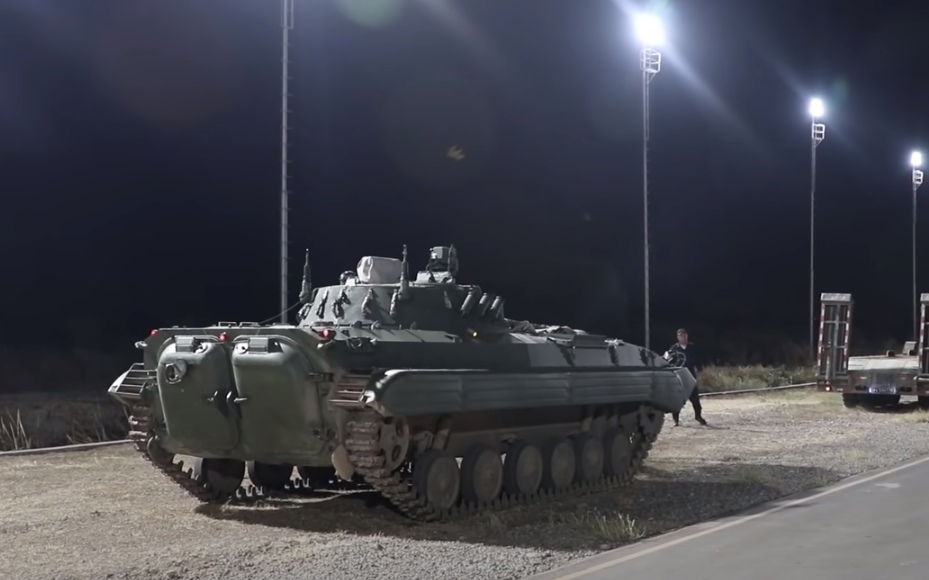 By BMP2M they mean the one with 4 kornets, not the version with 2 ataka launchers.
Hole 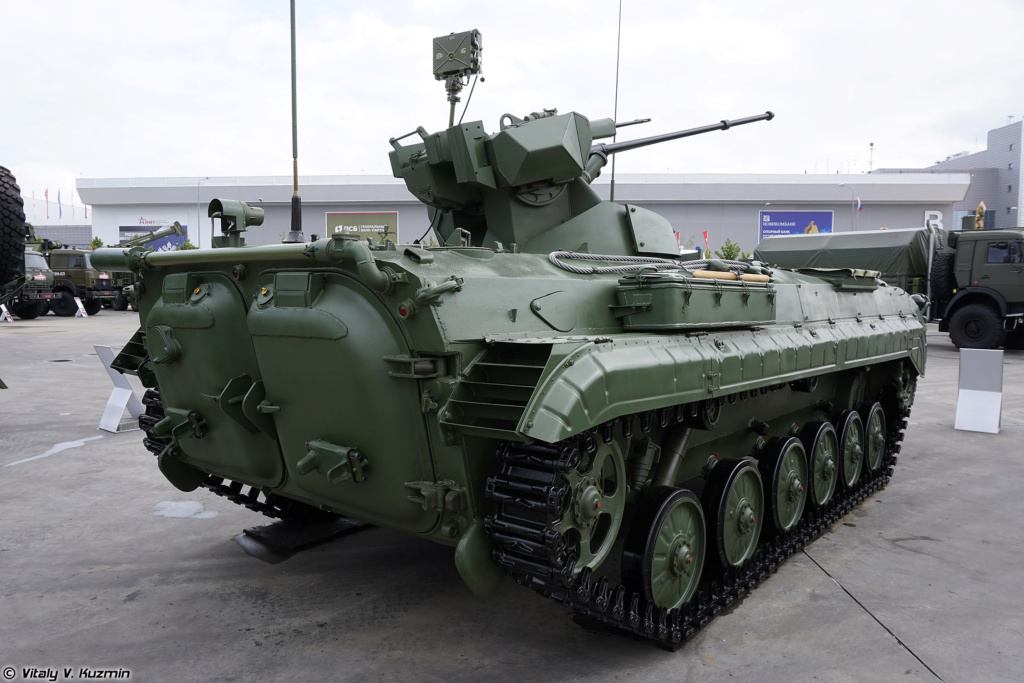 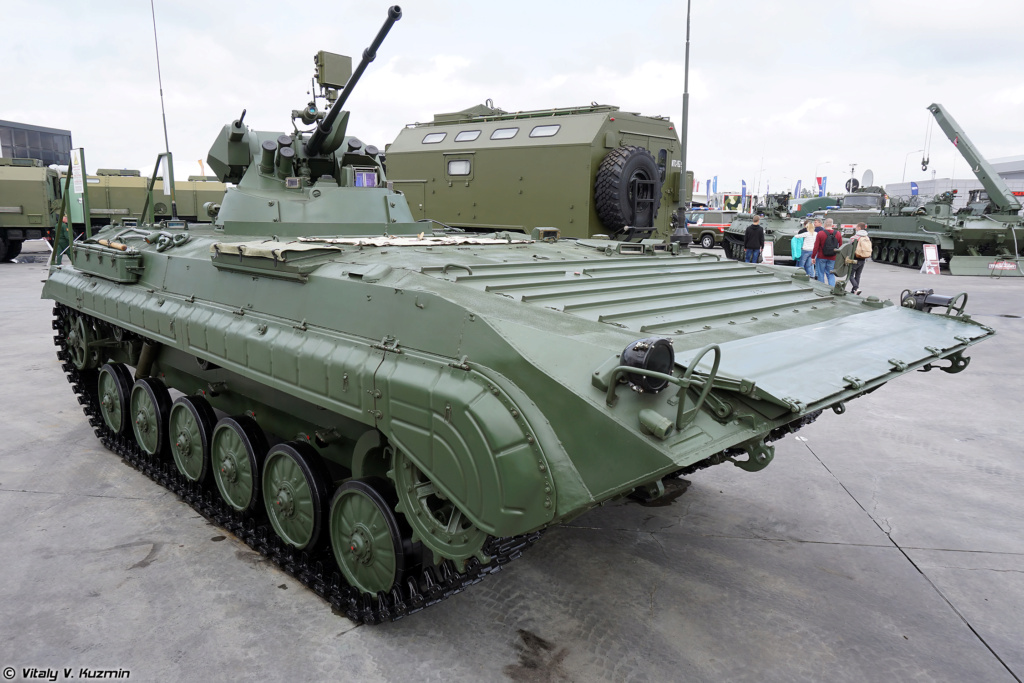 That radar is interesting... when I first saw it I thought it might be part of the new command detonation equipment... but that is a recon vehicle not a troop transport.
limb 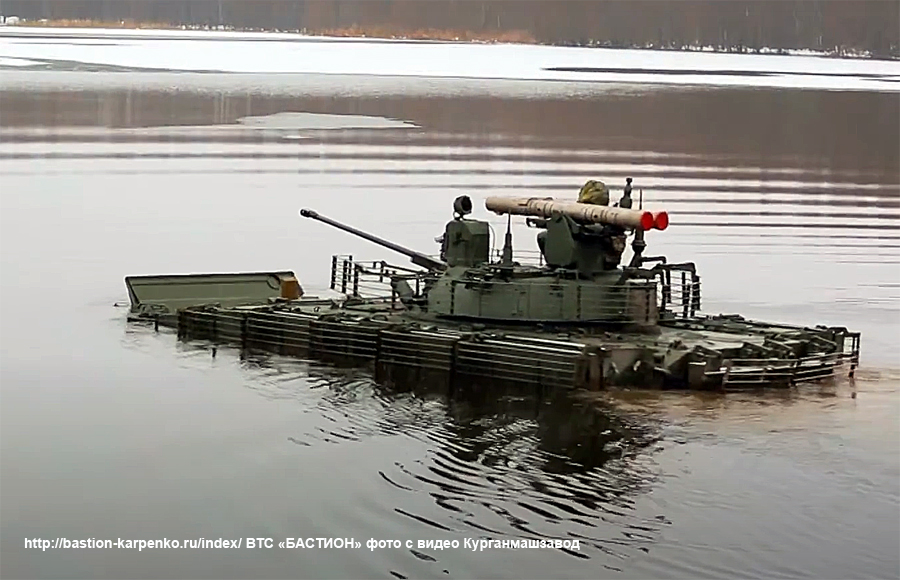 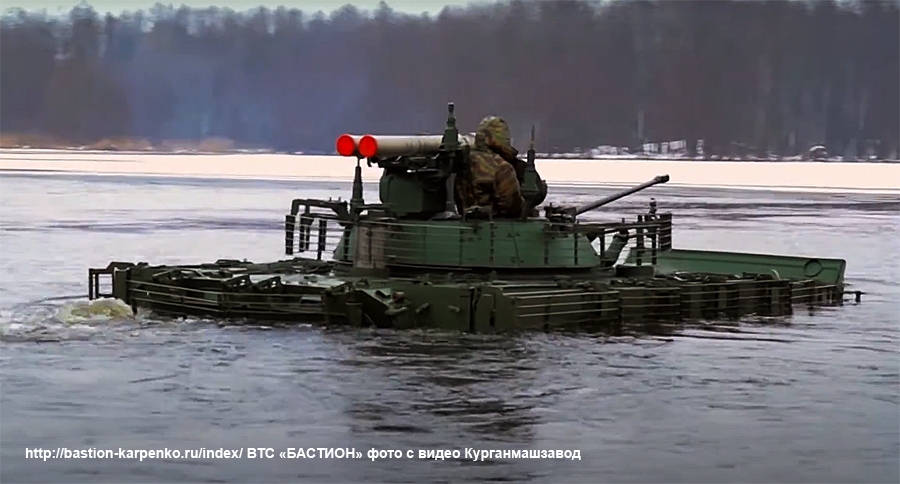 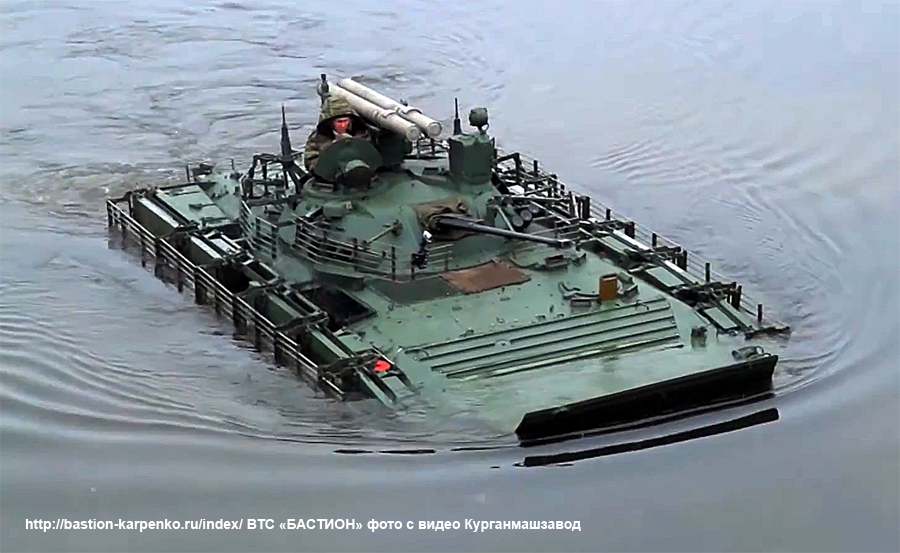 Why was this version put into service when the berezhok is superior?

Might be cheaper and have been used for testing.

With very different locations around the place sometimes systems and weapons are not ideal in some places but better in others.

I rather suspect that will be the laser beam riding version of ATAKA, which has been in production for quite some time... using that missile instead of Kornet would mean you could share stores with a helicopter unit perhaps, or they had production capacity that they wanted to use and this missile gets the job done too.
d_taddei2

going through some old documents and came across info on the BMP-1 i never knew that the main gun and coax MG gun had a dead space between 10 and 11 o'clock position. is this common knowledge?
GarryB

The BMP-1 has the driver in the front and the commander directly behind him in the hull on one side with the engine on the other side.

The dead fire area is because the commanders position has an IR light they can use from their position, though in practise often the commander would kick the gunner out of the turret so they could get a better view of the battlefield in the turret. 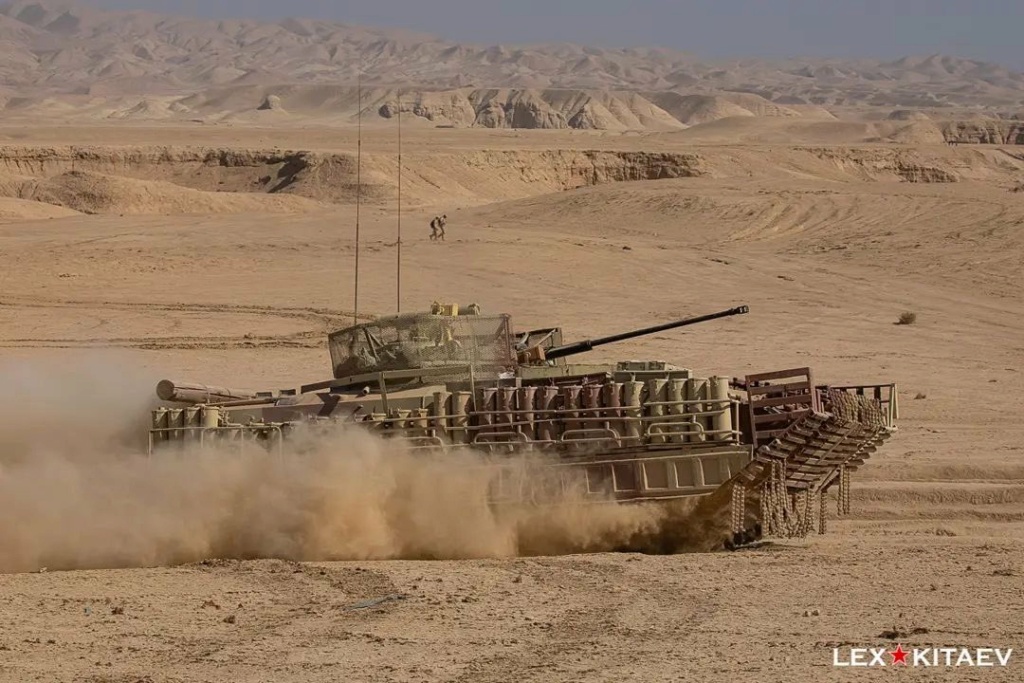 That's some serious protection for a BMP-2, nice
GarryB

Some of the new add on armour for lighter and heavier vehicles looks like canvas bags, but this seems to be using the volume created by the cage structure for extra storage... are they old ammo cannisters with sand or water inside them or something or is it carrying ammo for a mortar team...

Some of the new add on armour for lighter and heavier vehicles looks like canvas bags, but this seems to be using the volume created by the cage structure for extra storage... are they old ammo cannisters with sand or water inside them or something or is it carrying ammo for a mortar team...

i agree i was thinking this myself, although i didnt think they were carrying ammo, but rather the latter, using old ammo tubes to fill with sand, mud, concrete, if there are ones at the rear you could use to store drinking water (as long its clean lol) to act as additional armour. the front part you mentioned the shelf, this would be ideal to stack some some bags, and be used as additional protection in transit, they could off load the sandbags use them for protection for a machine post or ATGW post, no need to start filling sand bags when you already have then.

If they are old ammo tubes then they would be water tight so give them a quick rinse and fill with fresh water would be very handy when you stop.

A few might be damaged and leaking but the odds of them all being damaged is unlikely.

You could put rations or extra fuel or other useful things in them, and that front shelf could have foam rubber mats to put under your sleeping bags for the troops when you stop or possibly bundles of sticks you can attach to the tracks to improve traction on very soft ground, or a range of other things you might want or need operationally.

Carry extra boxes of PKM ammo or rifle calibre ammo for the troops, or even disposable rocket launcher tubes... if you are going to carry them it would be better outside the armour than inside... and it would be extra stuff so if it gets damaged it is not the end of the world.

Even just netting to put over the whole vehicle when you stop...

The motorized rifle unit of the combined arms army of the Eastern Military District (VVO) in the Amur region will be replenished with new weapons. Infantry fighting vehicles BMP-1AM "Basurmanin" will replace the armed BMP-1.

So already in the first half of February, a large batch of upgraded BMP-1AM "Basurmanin" will arrive at one of the military units in the Jewish Autonomous Region (EAO).

This infantry fighting vehicle is considered one of the best options for upgrading first-generation equipment. Instead of a turret with a 73 mm smoothbore gun "Thunder", a combat module with a 30 mm stabilized automatic gun with a more advanced combined sight is installed on it.

The anti-tank missile system "Metis" is used to combat armored enemy objects, and the "Cloud" system allows you to install camouflage aerosol curtains.

The power of the BMP-1AM engine is 300 hp. The maximum speed on the highway is 65 km/ h. The combat vehicle is capable of overcoming a 2.5 m wide moat .

The BMP-1AM is operated by a crew of 3 people. The landing compartment can accommodate eight servicemen.

NOTE: this is the first confirmed deployment of the BMP-1AM by the Russian military

Must be a rotation in from the Eastern military district then 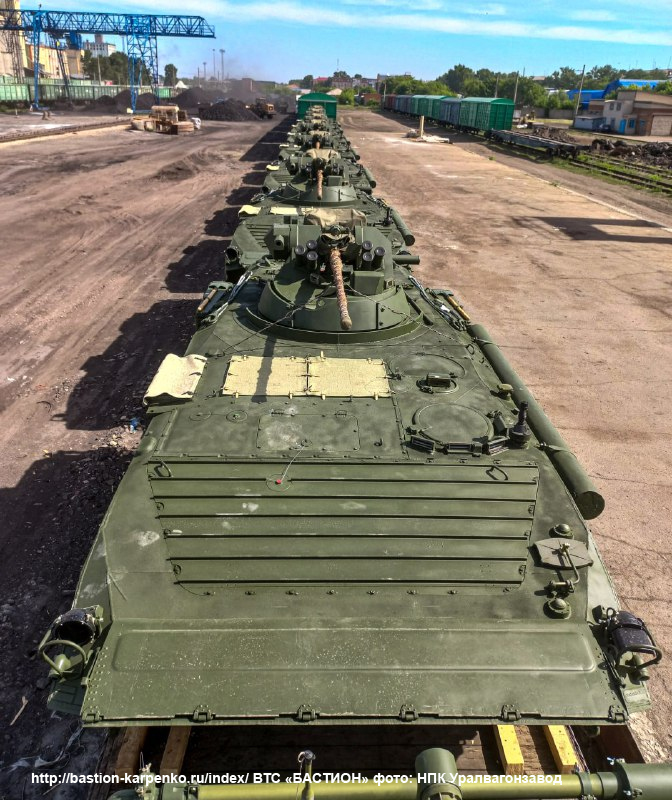 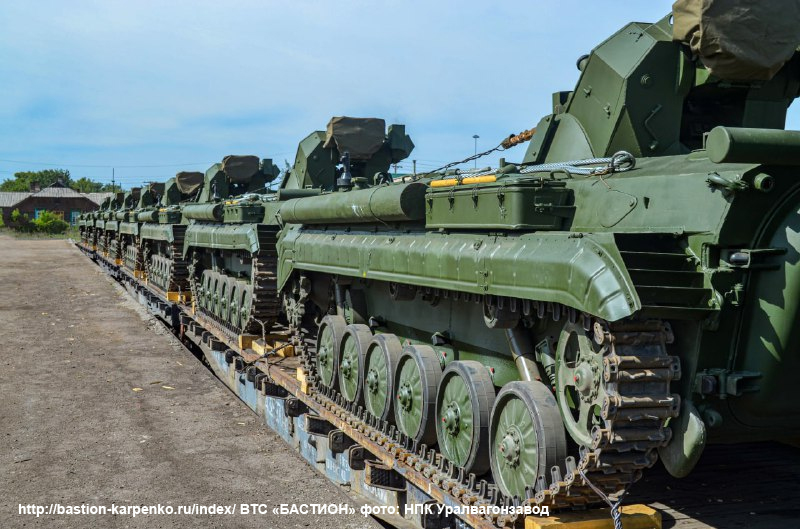 BRM-1K getting delivered to the customer

According to TASS , a batch of modernized combat reconnaissance vehicles BRM-1K, which received a fighting compartment, was supplied to the Ministry of Defense by Uralvagonzavod (UVZ, part of Rostec). As the enterprise reported on Tuesday, the vehicles have reached the level of efficiency of modern infantry fighting vehicles. "The Rubtsovsk branch of JSC Scientific and Production Corporation Uralvagonzavod <…>, under a state contract, completed the overhaul with the modernization of command combat reconnaissance vehicles BRM-1K. <...> The base fighting compartment of the vehicle was replaced with a unified one, the engine, communications and on-board electronics were replaced. The car was equipped with navigation equipment, reconnaissance equipment and surveillance devices.

The modernization is aimed at increasing the effectiveness of tactical reconnaissance by expanding the performance characteristics and firepower of vehicles intended for reconnaissance on the battlefield. The equipment has passed all types of running and fire tests under the control of representatives of the Russian Ministry of Defense, UVZ noted. The modernized combat reconnaissance command vehicle BRM-1K was created on the basis of the BMP-1. It has onboard protection against heavy machine guns, small-caliber automatic guns and shell fragments, and is capable of forcing water barriers.

In 2021, the 35th motorized rifle brigade and the 69th cover brigade received one battalion set of BMP-1AM "Basurmanin" vehicles. The deliveries were made to replace the BMP-1 vehicles, which are in service with the brigades. By the end of 2022, it is planned to completely re-equip the 69th cover brigade.

During the Special Military Operation in Ukraine, the BMP-1AM "Basurmanin" vehicles are actively used by Russian troops.

Hole wrote:BRM-1K getting delivered to the customer

BMP-1AMs if I'm not mistaken?

Hole wrote:BRM-1K getting delivered to the customer

BMP-1AMs if I'm not mistaken? 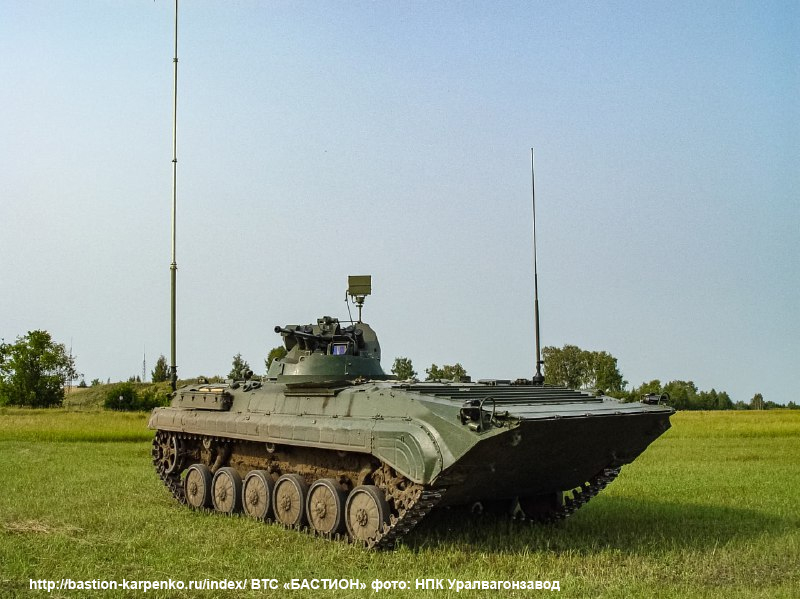 Main difference is the radar.