It seems that the 8 hour ceasefire could be linked to JFS getting out of east Aleppo. There appear to be two routes on this interesting but 10 day old Russian military map. 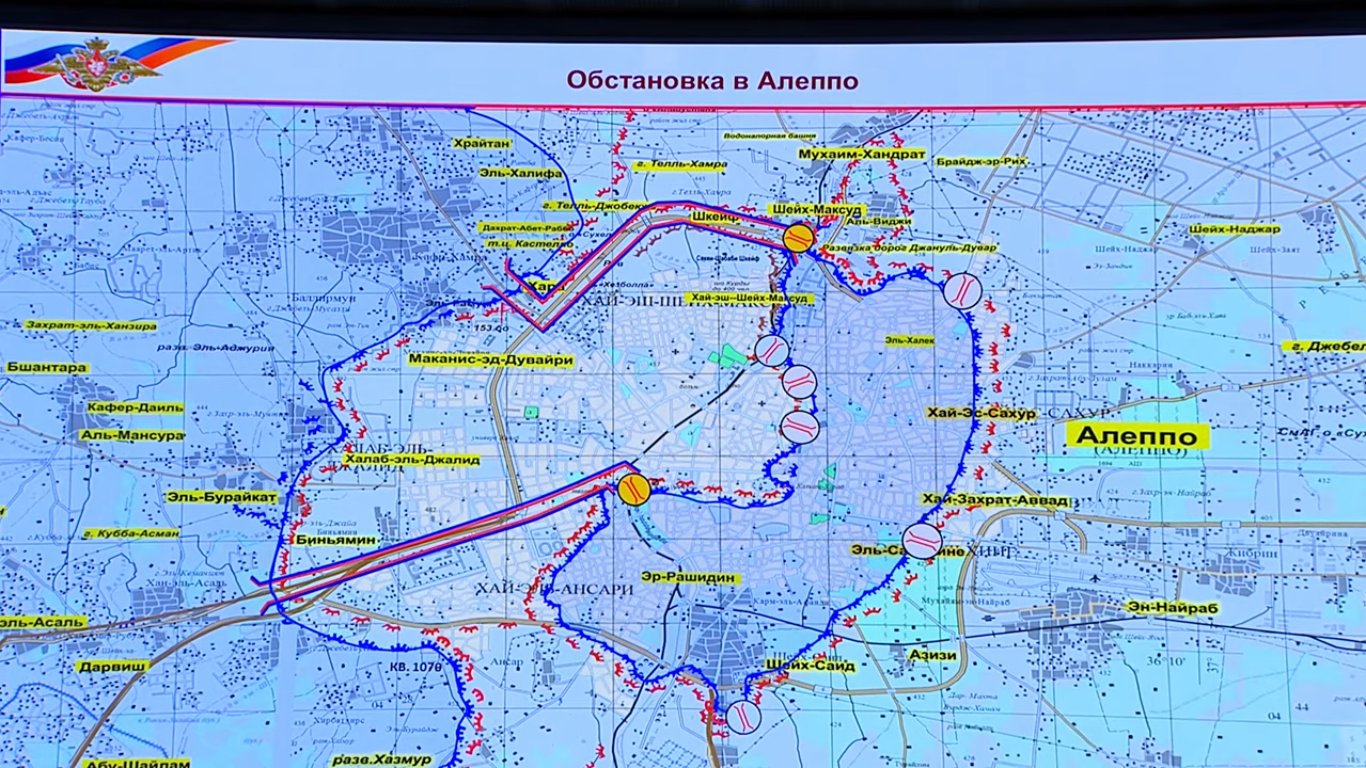 Could be large numbers of ISIS moving as well. Not so good.
d_taddei2

exactly what i was thinking and with the extra ISIS manpower, Deir ez Zoir could fall if they throw enough bodies at it. So not good really right now ISIS needs its front lines stretched, the SAA etc are too busy with Aleppo, Hama, Latakia, Palmyra, Eastern and western Ghouta to start to be distracted by influx of ISIS. And there simply isn't enough air power from Russia and Syria to deal with them. China needs to get its finger out and deploy a good number of troops (12,000), tanks, AFV, artillery, and some attack heli's along with at least 18 fixed wing, deploy them against ISIS front to finally lift the siege of Deir ez Zoir
zorobabel

Yes, worried about that too
Erk

JohninMK wrote:It seems that the 8 hour ceasefire could be linked to JFS getting out of east Aleppo. There appear to be two routes on this interesting but 10 day old Russian military map.

Will the timing of the ceasefire help ISIS come from Mosul to Syria in anyway?

JohninMK wrote:It seems that the 8 hour ceasefire could be linked to JFS getting out of east Aleppo. There appear to be two routes on this interesting but 10 day old Russian military map.

Will the timing of the ceasefire help ISIS come from Mosul to Syria in anyway?

Unlikely unless they fly in. The aerial ceasefire covers only Aleppo.

Lavrov this morning on the subject

“As far as I know, the city is not fully encircled. I hope it’s because they simply couldn’t do it, not because they wouldn’t do it. But this corridor poses a risk that Islamic State [IS, formerly ISIS/ISIL] fighters could flee from Mosul and go to Syria,” Sergey Lavrov said on Tuesday, commenting the ongoing siege of the Iraqi city.

“We will be evaluating the situation and take decisions of both political and military nature if this happens,” he added. “I hope the US-led coalition, which is actively engaged in the operation to take Mosul, will take it into account.”

The coalition – which includes the air forces of several nations, primarily the US, and ground forces of the Iraqi government, Kurdish and Shiite militias and Turkish troops – is involved in the siege of Mosul, the Iraqi stronghold of IS. Lavrov pointed out that the coalition has internal rivalries, which may hurt the effort to liberate the city from IS, a goal that Moscow supports.

“The regional balance of power is affected by the rivalry over who would take Mosul on the ground. Would it be the Iraqi army? If so, would the Shiite troops take part? What part would the Kurdish militia play? What part would Turkey, which has an expeditionary force there, play with the Iraqi leadership protesting against it,” Lavrov said.

“There are also some 5,000 American special operations troops, which Washington calls military advisers. Well, 5,000 advisers is a large number,” he added.

TEHRAN (FNA)- Reports from western Iraq said Leader of the ISIL terrorist cult Abu Bakr Al-Baghdadi has succumbed to his last month's fatal injuries and died in a region along the border with Syria.
"Al-Baghdadi had been severely wounded in the Al-Anbar battle in Western Iraq last month, and his wounds were so lethal that he could not at all move freely," a local Iraqi source told the Arabic service of the Russian Sputnik news agency on Tuesday.

The source said despite long treatment in Mosul, the general health conditions of the ISIL leader deteriorated due to "a deep abdominal cut, damage to his liver and crippling wounds in his left limbs".

The source said Al-Baghdad lost his life in the town of Al-Be'aaj some 100km (60 miles) West of Mosul near the border with Syria, but his death is concealed to avoid the loss of morale among ISIL ranks who are faced with a tough war in Mosul and Syria these days.

There have been numerous reports on the fate or location of the ISIL leader in the last two years. As the war ravages over the self-proclaimed capital of the terrorist cult, Mosul, in Western Iraq, Arab media sources said yesterday al-Baghdadi had fled to Raqqa in Syria before the Iraqi army started its operations in Mosul, but his wife was taken.

According to Iraq's Sumeriya News, local sources in Nineveh quoted defected ISIL leaders as saying that al-Baghdadi has managed to escape from Mosul to Raqqa, but his wife has been arrested.

The defected militants stated that senior members of the terrorist group, called the ISIL police, have rebelled against al-Baghdadi and called on his supporters to surrender themselves.

The source did not mention who has arrested Baghdadi's wife, but his words implied that she has been captured during a mutiny and by those who rebelled against the terror leader.
GunshipDemocracy

Iran alone has enough manpower to help. Quesion is more in politics first with logistics an dweapone in second place.
arpakola

The Arab media outlet said the death of the unnamed commander is leading to chaos among the US-backed Kurdish forces. "The Command Center of the US military forces in Northern Raqqa and the Kurdish forces of the People’s Protection Units (YPG) have launched joint probe into the incident," they added.

Kurdish sources said Saturday that the US Army has deployed nearly 300 fresh forces in Northern Raqqa near the border with Turkey. "120 US army soldiers have been deployed in North of Tal Abyadh. Also 60 other soldiers have been dispatched to a base near the village of Shabadeq close to a road towards the town of Salouk," the sources said. "The Shabadeq base is a camp to train the Kurdish fighters for war against the ISIL terrorists in the Eastern battlefields of Raqqa up to the Northern banks of the Euphrates River," the sources added.

"In the meantime, over 100 US soldiers have entered Ein Issa via an illegally-established US army base in the village of Kharab Isq to coordinate Kurdish fighters' operations and meanwhile guard the US political officials who have been dispatched to Syria to form a new coalition, allegedly for the capture of Raqqa," the sources said.

I saw that this morning...
calm

#SRO - MAP - As #Turkey was already celebrating cutting #SDF possibilities to move toward #Bab, SDF launching its own offensive tonight. 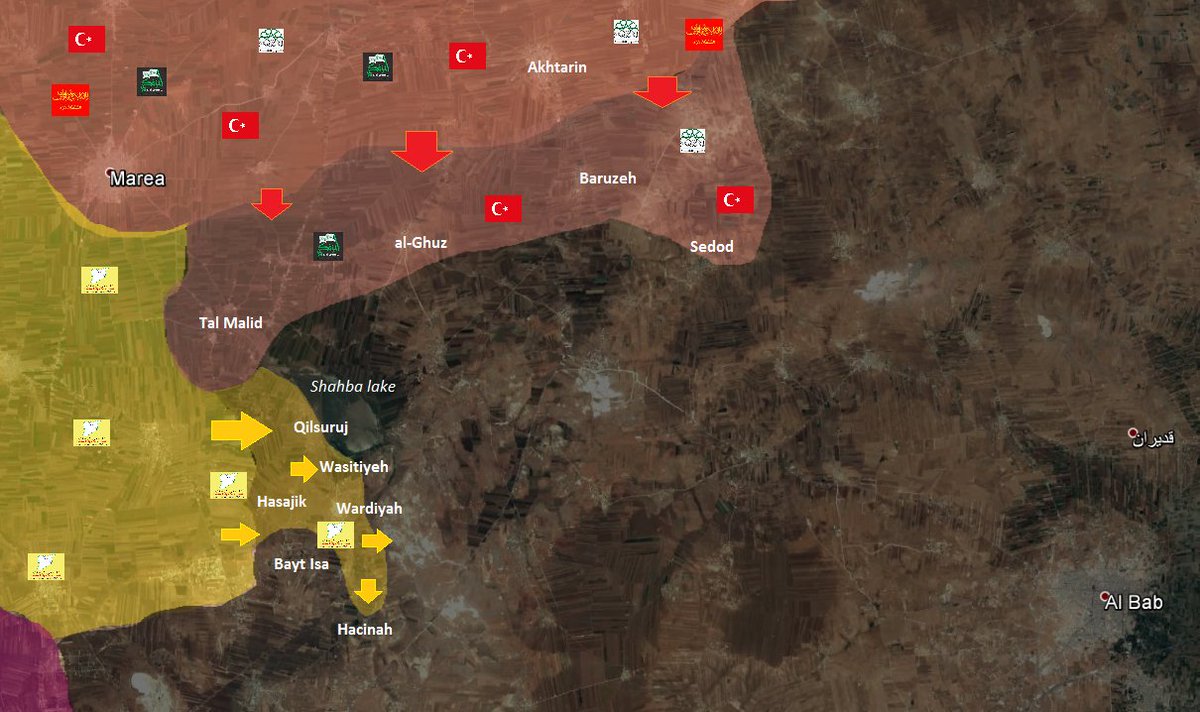