Only way this could be bigger burn is if it were followed by incendiary bomb.

...No after-shave, no shaving cream, no cooling/soothing balm, no...trust me they'll be plenty of burn!

The only way their getting out of this alive is if there's some formally recognized surrender, or that they get their Caitlyn Jenner on...

That looks like the cheapest trashy razor that exists, shaving ur face with that is a pain
KoTeMoRe

iraqidabab wrote:That looks like the cheapest trashy razor that exists, shaving ur face with that is a pain

It's for shaving under the chin...
franco

JohninMK wrote:Map purporting to show SAA progress in blue in last couple if weeks. Must be pretty demoralising to be in the area being compressed with no way out and wondering what was the point if the supply of virgins might be under pressure from all the dead bodies around you.

Anyone reading this in Damascus or Moscow? If so why not start a 'running out of virgins' rumour? 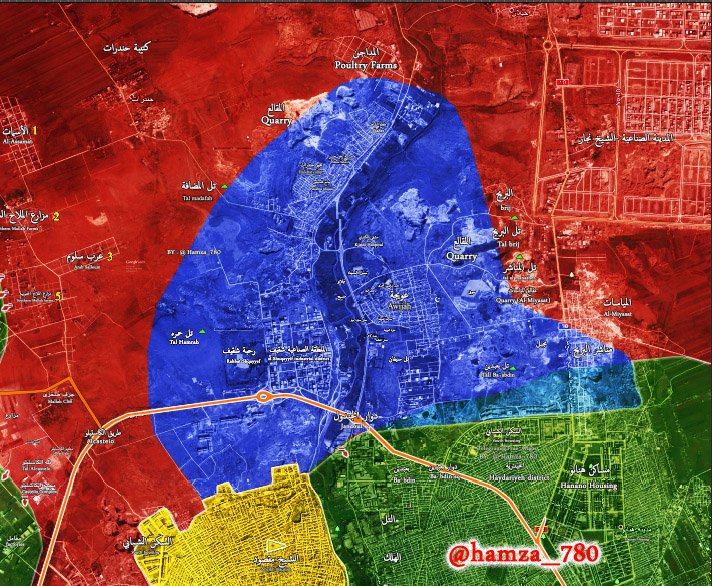 Non-Syrians failed to reach an agreement about Syria

calm wrote:Non-Syrians failed to reach an agreement about Syria
....... 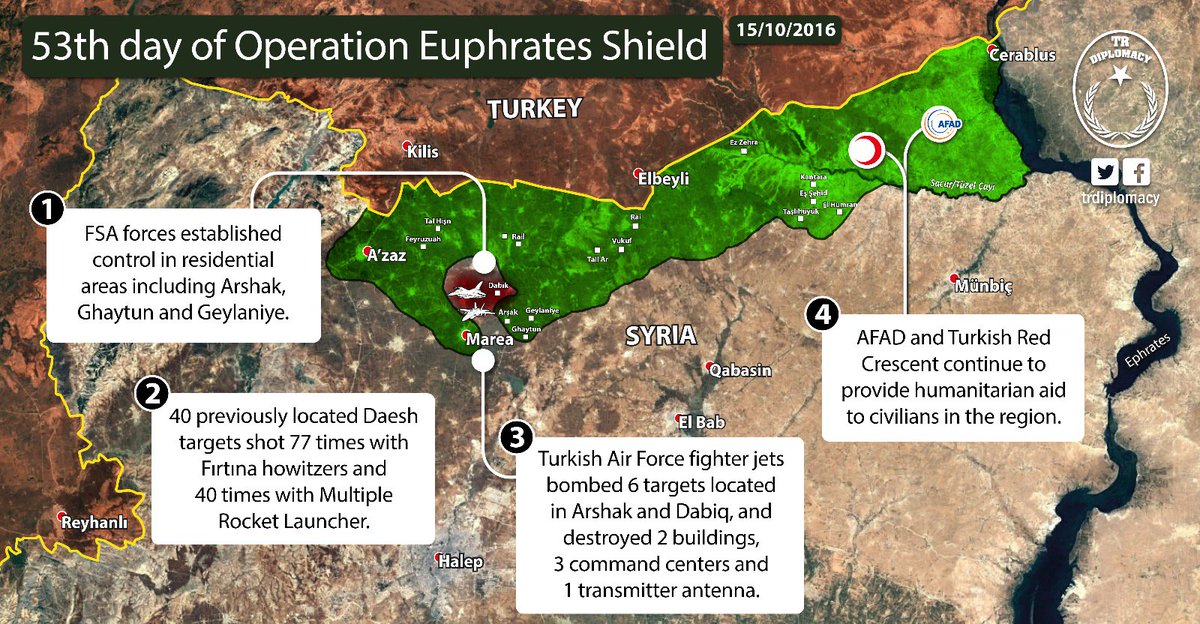 calm wrote:Non-Syrians failed to reach an agreement about Syria
.......

Looks like a SAA all out offense in Northern Hama; 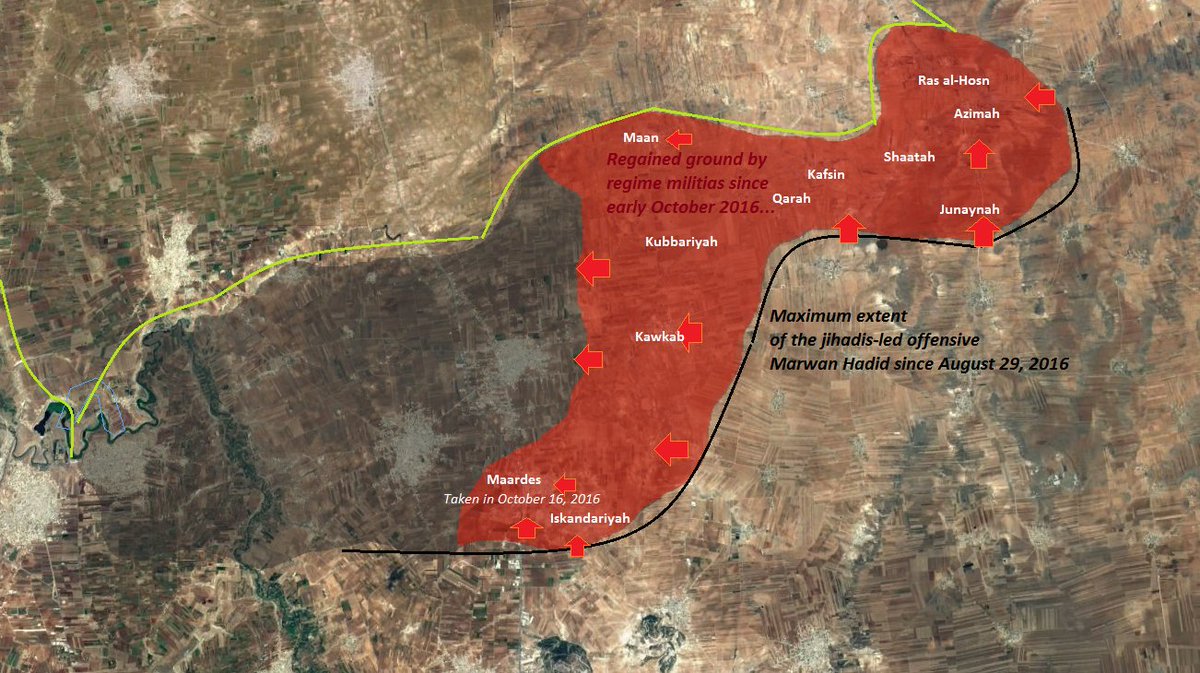 Another progress in blue map, this time 8 days worth. Are these guys on time based performance pay now 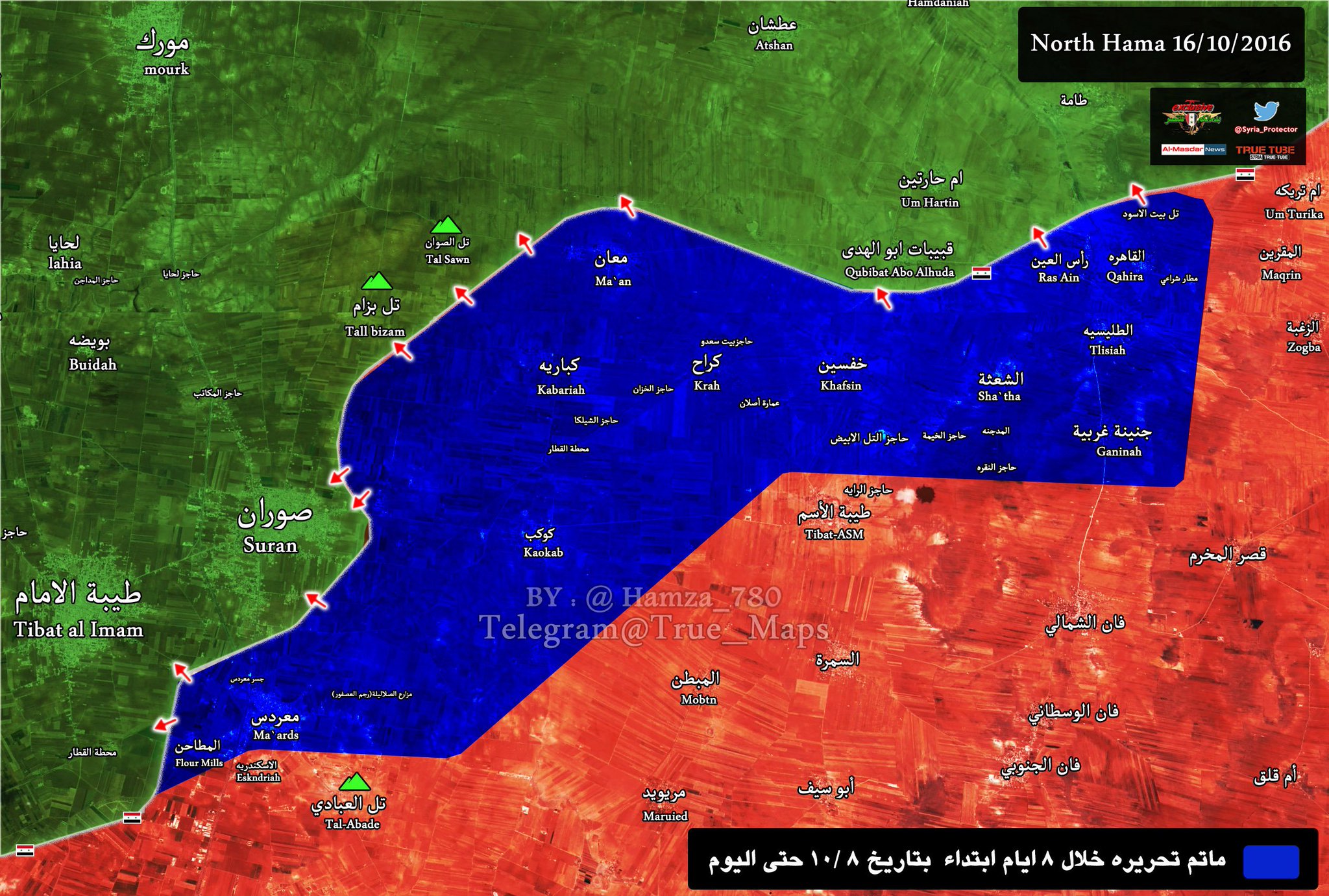 JohninMK wrote:Another progress in blue map, this time 8 days worth. Are these guys on time based performance pay now

20 soldiers setting up a mortar...

why do you present terrorists´ voids?!

why do you present terrorists´ voids?!

What's that supposed to mean? 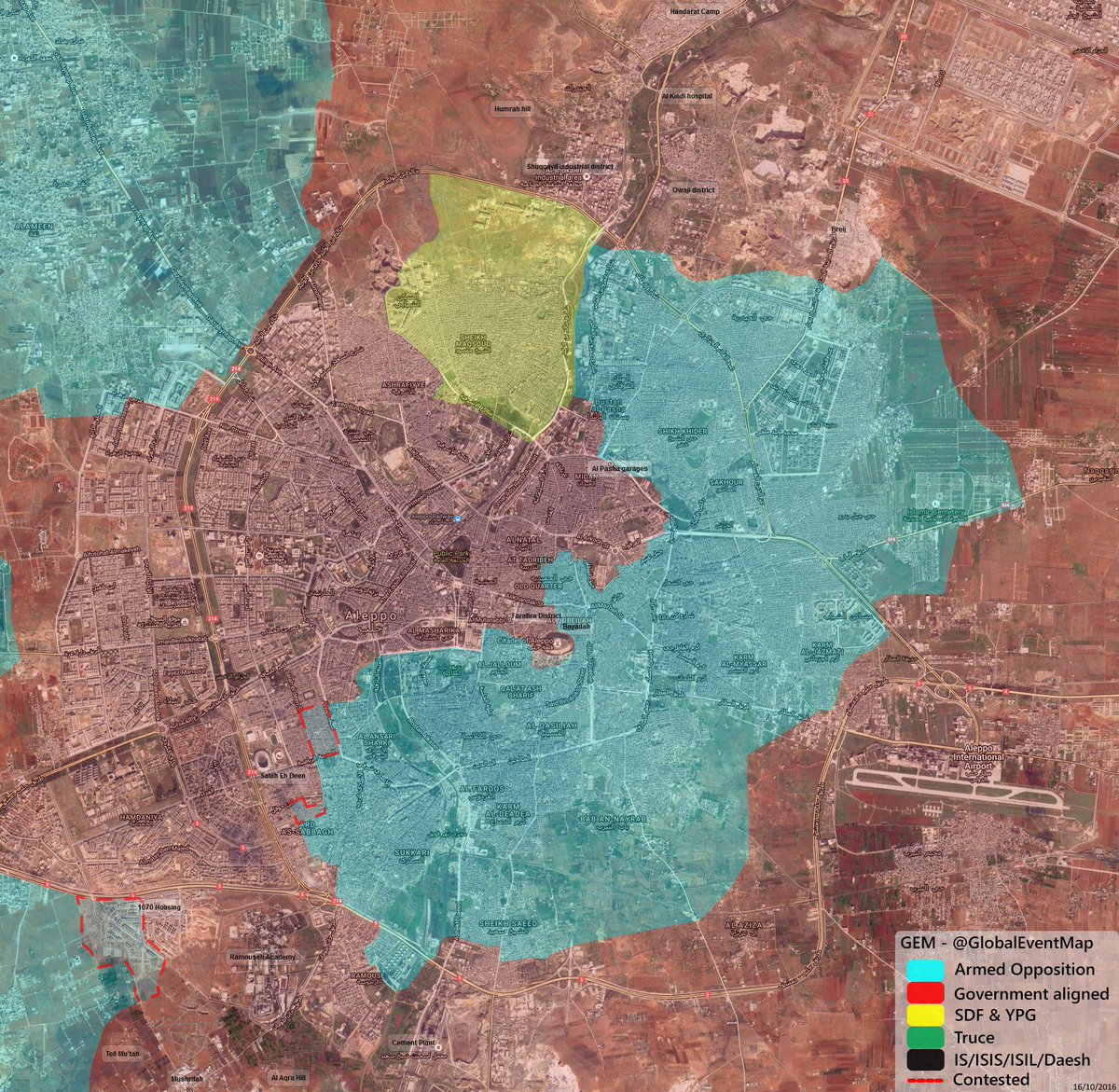 As I see those are SAA or some affiliated groups setting up the mortar since the rocket fired at them is USA TOW missile which is operated by 'moderate' rebels.
arpakola

A key to success in urban conflict like this is to get in behind the prepared defences, which tend to be designed like the rings of an onion, facing out allowing the defenders to fall back to the next line of defence, rather than lots of all round defended 'forts'. Its very tough to start but once in the attack can fan out between the defensive lines and hit them from behind and the further in the penetration the less prepared those lines will tend to be.

It looks like the SAA are going to be doing just that, driving deep into Eastern Aleppo from the north down one prime axis, using air power and artillery on the prepared positions they meet. Good luck to them, the quicker this is over the better.

As the assault on Mosul has now started we might start to get PR out of ISIS there showing Iraqi/US forces bombing hospitals and schools with dead children and puppies!
KoTeMoRe

Setting up a 120mm mortar in the dead middle of a crossroad, what the ...no one is on watch, no one setting up screen with rags.
calm

The Arab media outlet said the death of the unnamed commander is leading to chaos among the US-backed Kurdish forces. "The Command Center of the US military forces in Northern Raqqa and the Kurdish forces of the People’s Protection Units (YPG) have launched joint probe into the incident," they added.

Kurdish sources said Saturday that the US Army has deployed nearly 300 fresh forces in Northern Raqqa near the border with Turkey. "120 US army soldiers have been deployed in North of Tal Abyadh. Also 60 other soldiers have been dispatched to a base near the village of Shabadeq close to a road towards the town of Salouk," the sources said. "The Shabadeq base is a camp to train the Kurdish fighters for war against the ISIL terrorists in the Eastern battlefields of Raqqa up to the Northern banks of the Euphrates River," the sources added.

"In the meantime, over 100 US soldiers have entered Ein Issa via an illegally-established US army base in the village of Kharab Isq to coordinate Kurdish fighters' operations and meanwhile guard the US political officials who have been dispatched to Syria to form a new coalition, allegedly for the capture of Raqqa," the sources said.

More on the Mosul rats fleeing to Syria. As normal, its the management that is getting out, leaving the lower levels to be slaughtered. Time for a mutiny!

TEHRAN (FNA)- Iraq's volunteer forces (Hashd al-Shaabi) complained that the warplanes of the US-led coalition are allowing ISIL military convoys flee Mosul in Iraq's Nineveh province to Syria without being harmed. "Much surprised the ISIL convoys that have been escaping from Mosul to Syria have not come under attack by the coalition fighter jets," a Hashd al-Shaabi source said.
........................................
Meantime, many ISIL top commanders, including Al-Baghdadi himself and his deputies, as well as their family members have left the city for Raqqa, the terrorist cult's second self-proclaimed capital. Al-Baghdadi and his top aides left the city last week, while local sources in Nineveh disclosed on Sunday that the families of the ISIL terrorists that had left Mosul just arrived in the town of Merkedeh in Syria's Hasaka province.

"The ISIL commanders, including al-Baghdadi, are escaping Mosul to Syria," Iraqi Kurdistan Democrat Party's media director Saeed Mamouziti said last week. He said that al-Baghdadi has also ordered his followers to completely destroy Mosul if they are defeated in the war against Iraq's joint military forces. Later Mamouziti said that the ISIL militants were fleeing the city since the long-awaited large-scale operation to free Mosul was expected to be launched in the following days.

Meantime, local sources revealed that "ISIL commanders' families, including over 25 foreign families, escorted by military convoys reached the town of Merkedeh" on Sunday.

Earlier on Sunday, local sources in Nineveh province disclosed that the ISIL has brought to a halt all activities of its security offices in the city of Mosul. "The ISIL has recently issued a circular in Mosul city according to which all its offices will halt operation until further notice," a local source said. The source noted that the ISIL has already evacuated its security offices in several districts of Mosul in recent days, while many ISIL members seem confused to see the rush in their commanders' actions.

The US has also been pressuring Baghdad to keep the Hashd Al-Shaabi away from the operation, but they are now deployed to the battlefield after Prime Minister al-Abadi, the commander-in-chief of Iraq's armed forces, personally approved their participation in the Mosul operation last week.

From the LA Times no less;

I'm hoping that once Mosul falls, PMUs will pour into Syria and end the rebellion once and for all.
Sponsored content