This one would be a secret Putin's weapon used to scary polar bears.
Outrageous!
More sanctions!

Even worse. These ships destroy all the ice on which poor polar bears live.

This thing can be only born in evil Russkie's mind!
Ice is democratic!
More sanctions!
Russian_Patriot_

TSNIITMASH specialists have produced the first prototype of a separation element for nuclear icebreakers using additive technologies. The product was produced using the technology of direct laser growth from corrosion-resistant steel.

Next, the element will undergo a comprehensive assessment and bench tests. The use of additive technologies for the serial production of the separation module will reduce the production time by an average of up to four times.


Rosatom held a tender for the construction of the first two hulls of floating nuclear power plants to supply Baimsky GOK only among Asian shipyards.
It is known that the winner was the Chinese shipyard in Nantong, which offered the lowest price of $ 226 million. Both hulls must be delivered to Russia by February 2024. According to some reports, the key equipment - reactors and turbines - will be installed on the vessel already in Russia at the Baltzavod. They decided to give the contract for the construction of the buildings to China, so as not to disrupt the deadlines and not to increase the price of the entire project. It is reported by “Kommersant".

Atomenergomash has summed up the results of the tender for the construction of the first two buildings for modernized floating power units intended for power supply of the Baimsky GOK in Chukotka. The Chinese shipyard Wison (Nantong) Heavy Industry Co Ltd. The contract value is $ 225.8 million, which is about 30% lower than the initial maximum auction price ($ 325.12 million, or 24.11 billion rubles).

Also, according to the agreement, the Chinese shipyard must deliver the first building with a residential superstructure by October 2, 2023, and the second by February 2, 2024. An advance payment of 15% of the amount will be paid at the end of the current year. 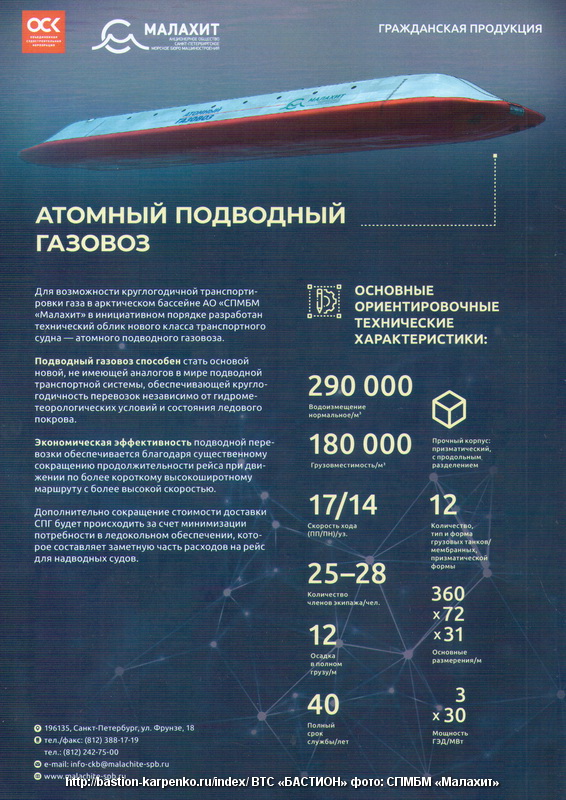 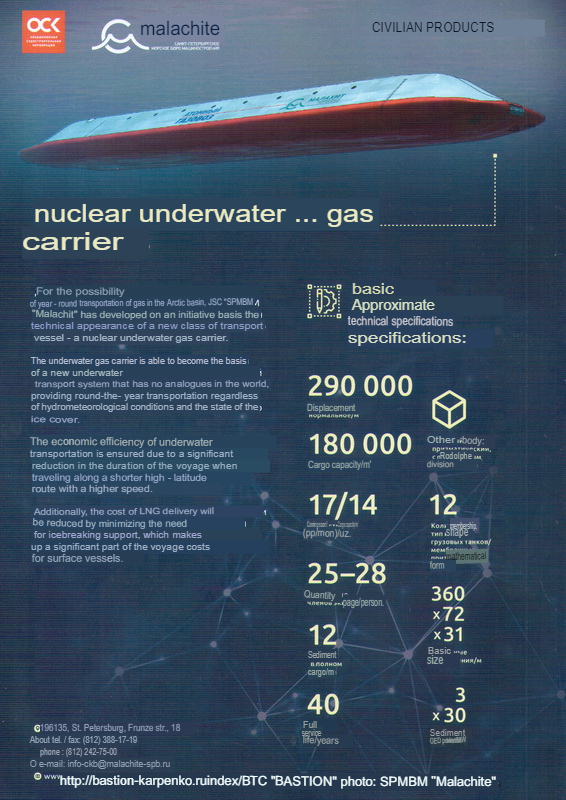 You could put a lot of Kaliber/Tsirkon missiles on that baby.

Now to something completly different... 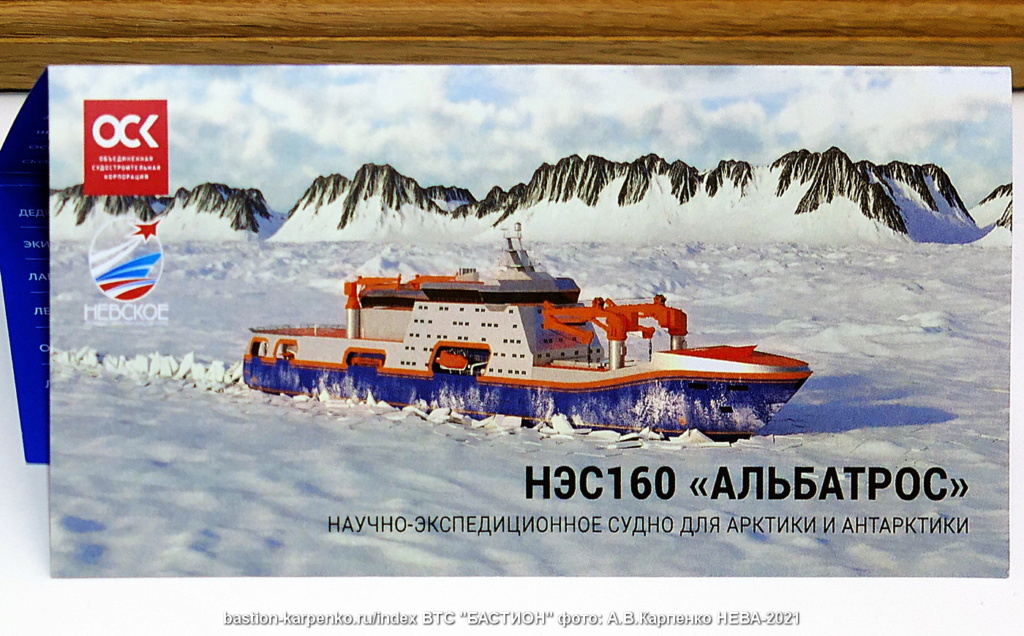 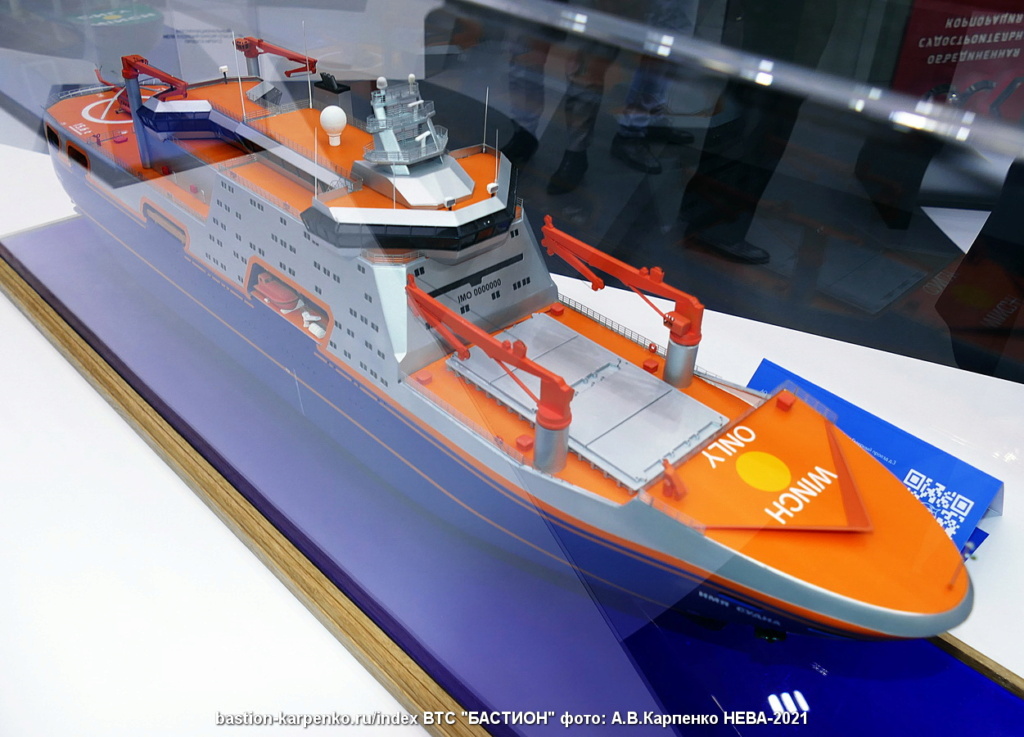 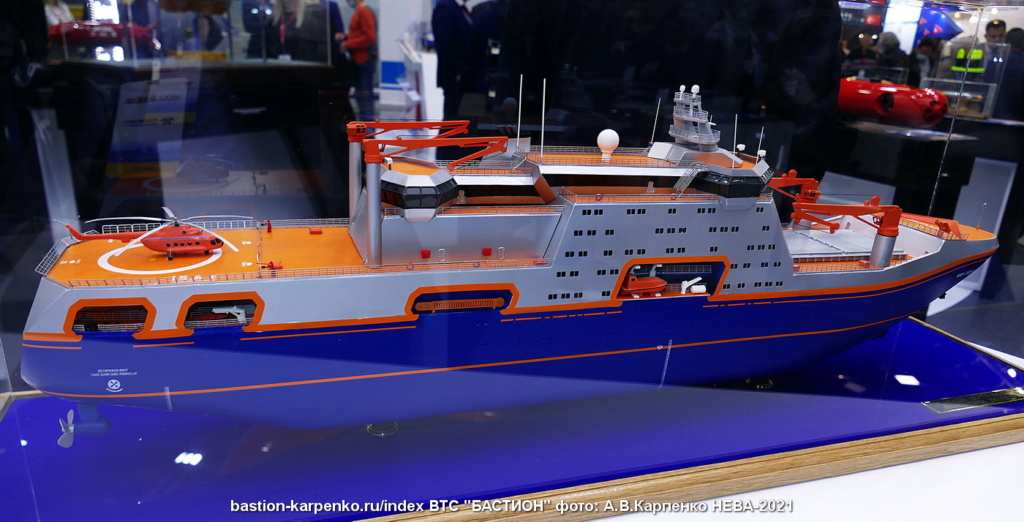 Hole wrote:You could put a lot of Kaliber/Tsirkon missiles on that baby.

Now to something completly different...

"A possible new scientific research vessel". Yes, this is written on the first pic
lyle6

You can fit an entire army in that thing... Arctic vehicles, Yasen-M, Poseidon... Are the Russians planning to have a go at Neuschwabenland?

In reality it´s a spaceship! Evil Russians want to conquer the moon! Only Musk can save the holy west now!

Another scientific vessel for the arctic: 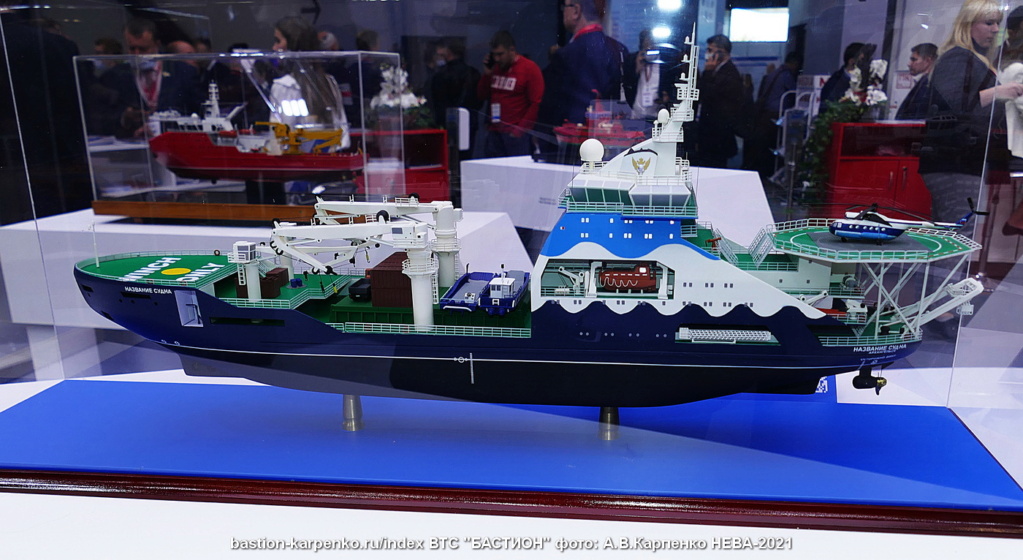 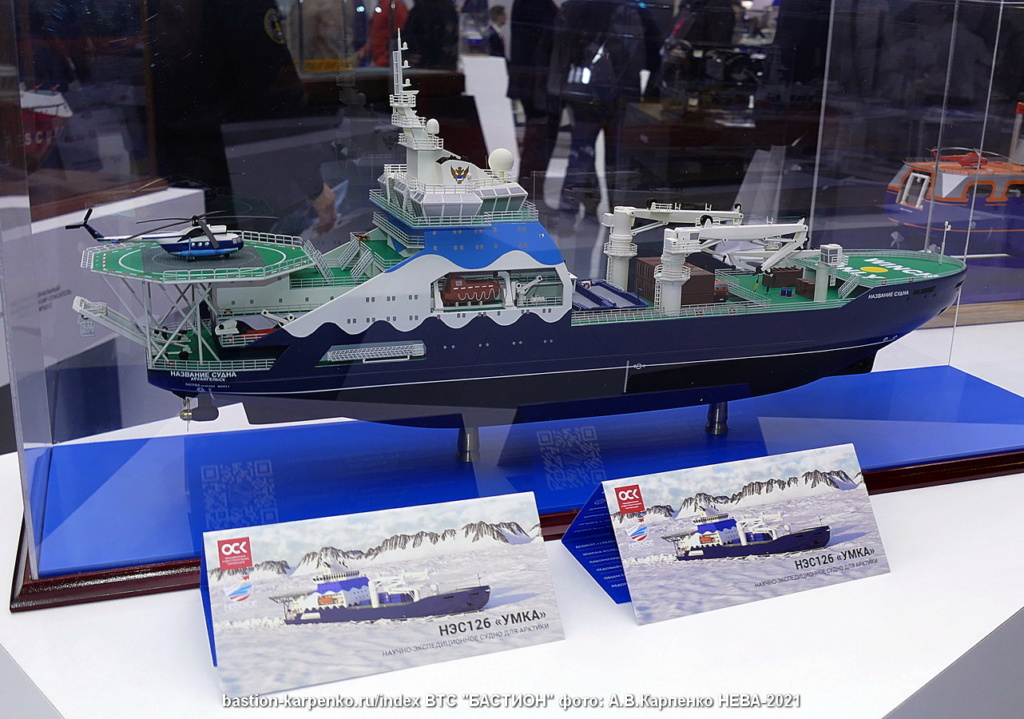 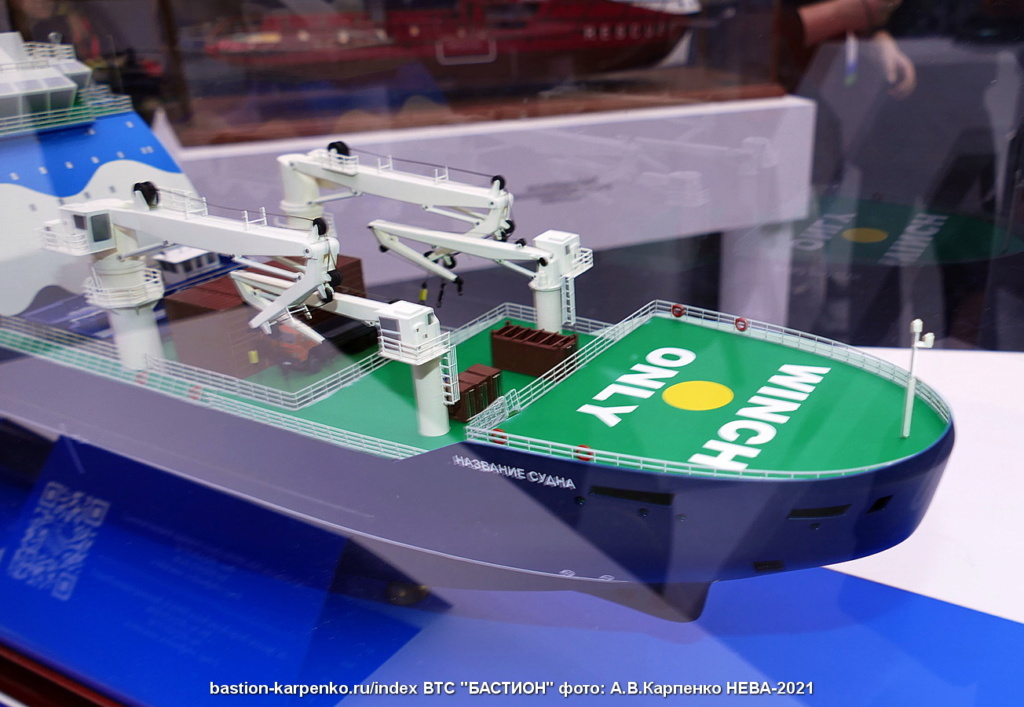 And a heavy lift ship for Rosatom: 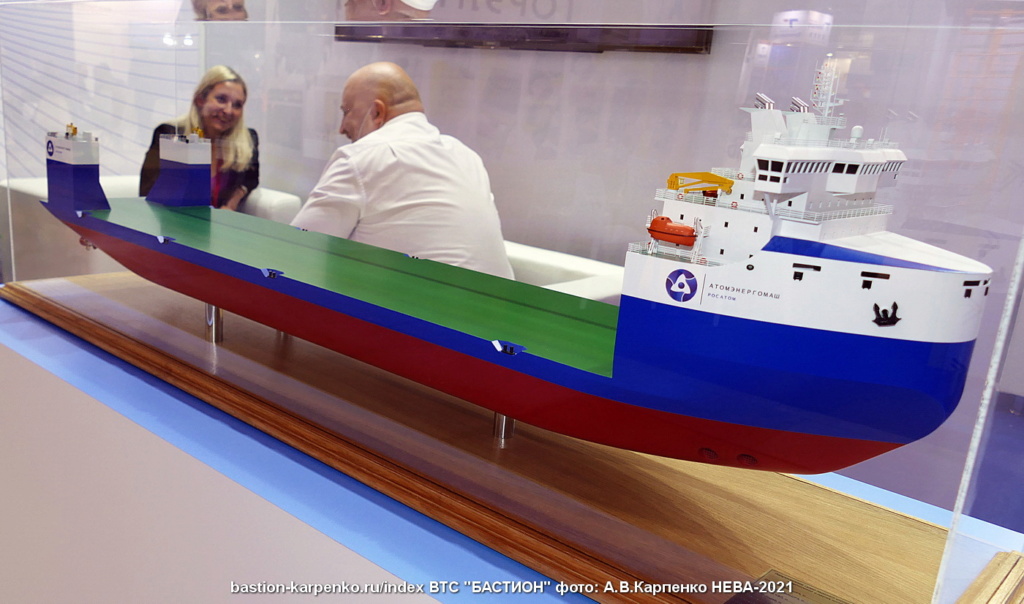 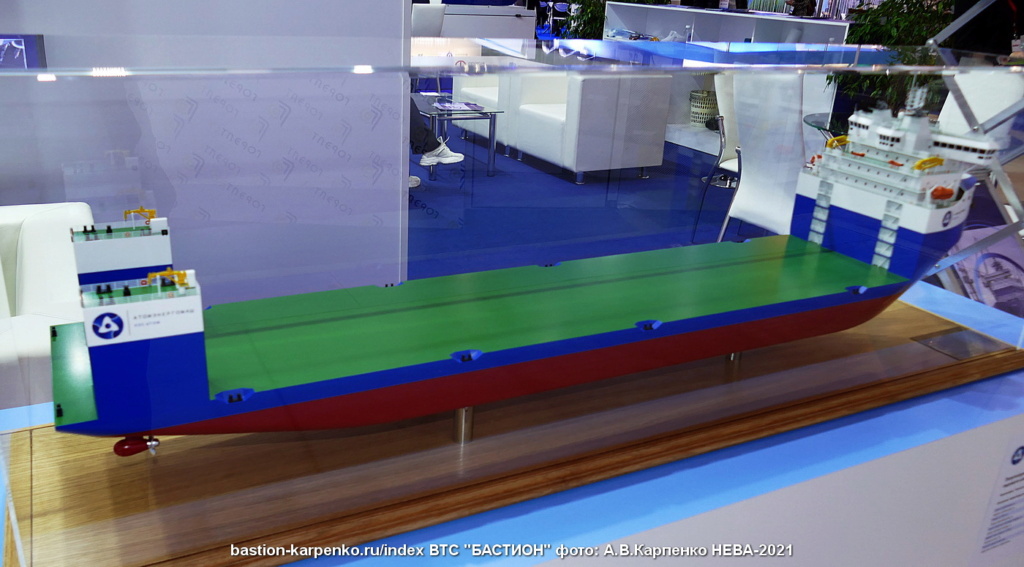 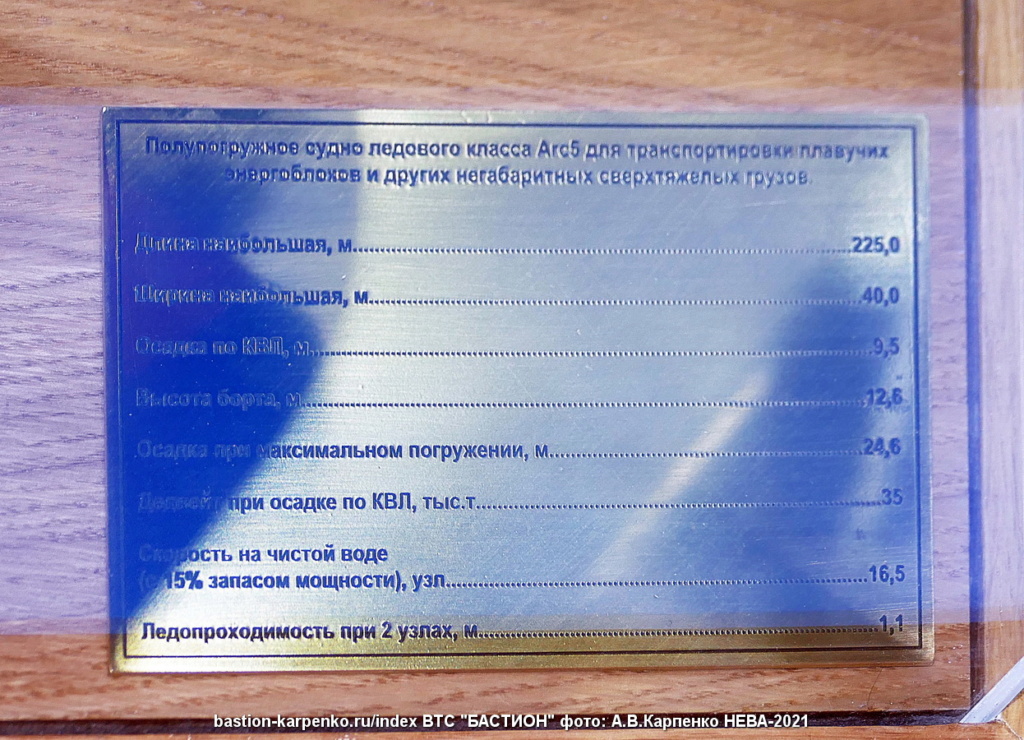 More projects from the Neva-21 exhibition. 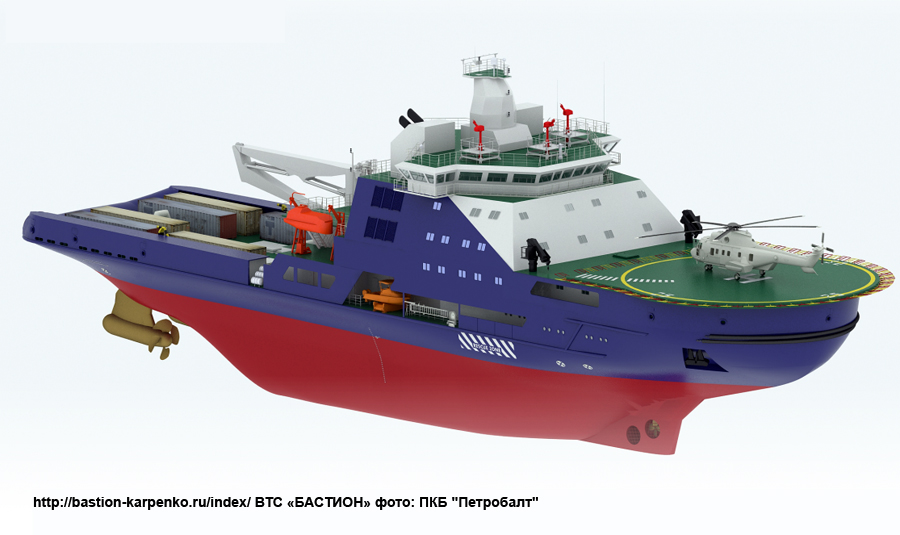 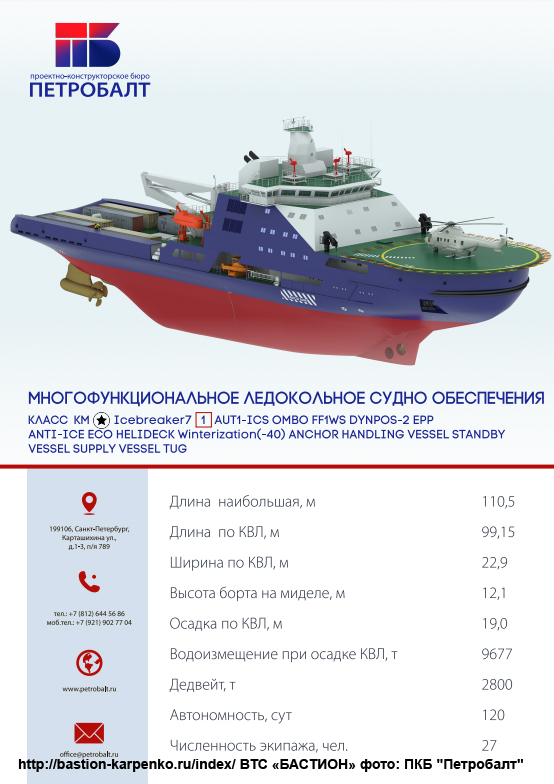 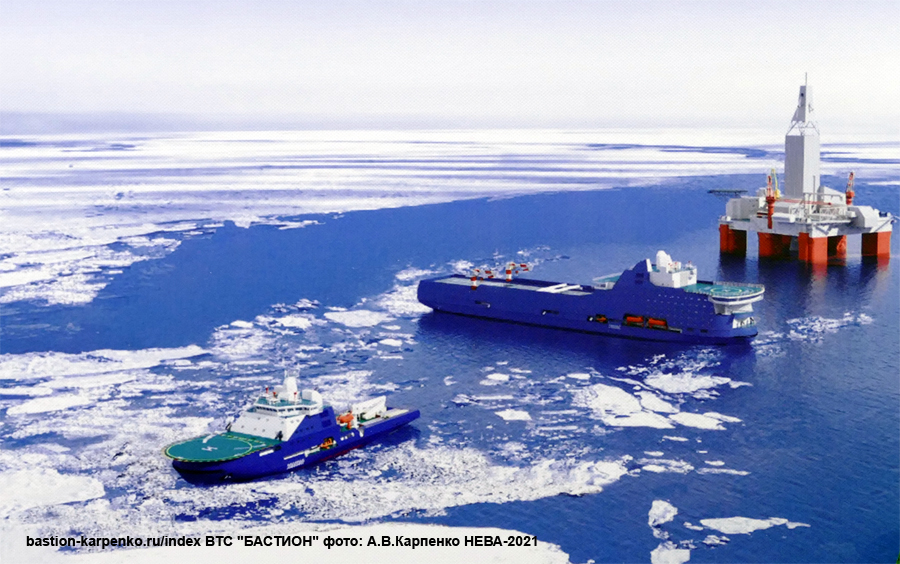 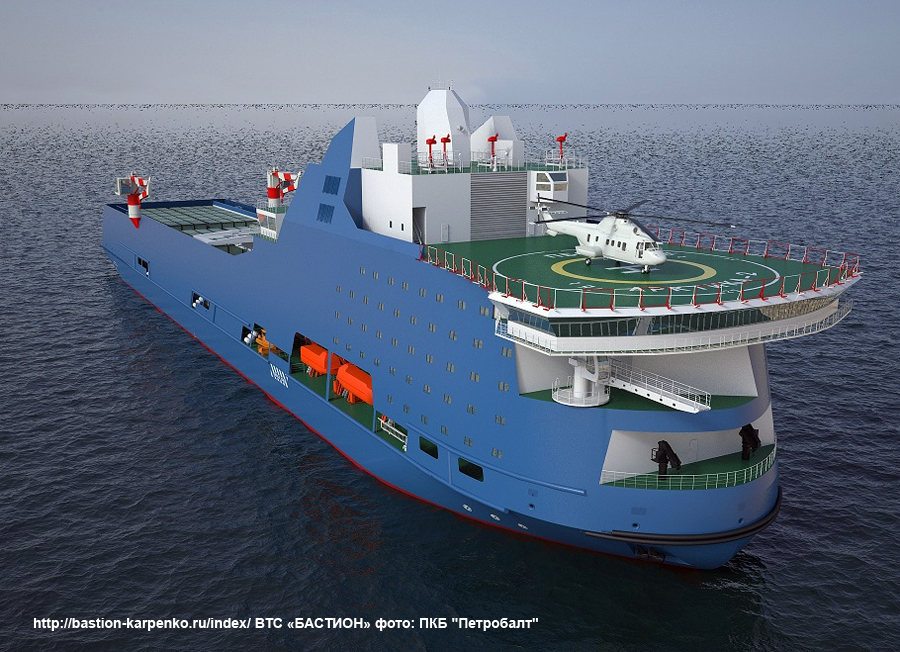 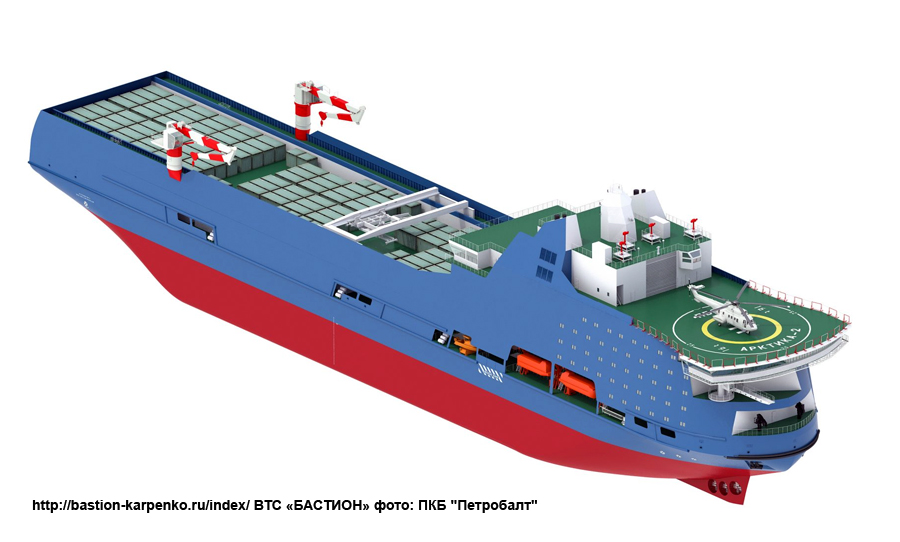 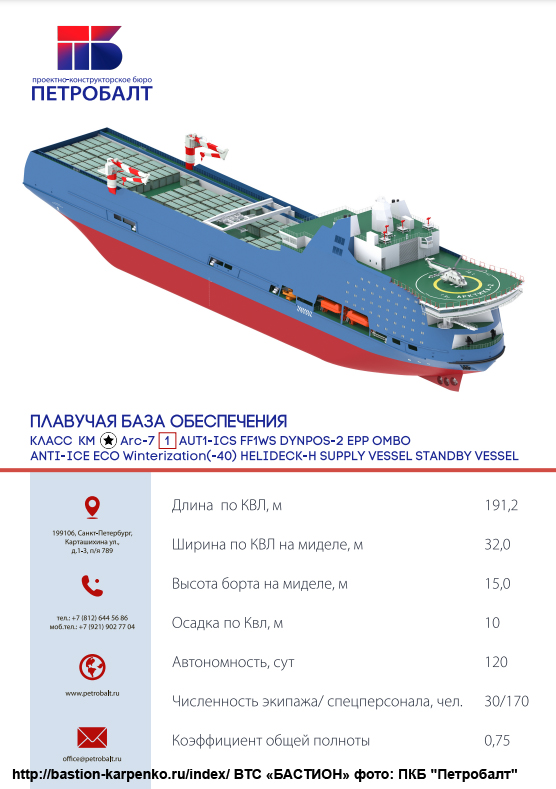 What are these 2 ships for? Translate their brochure please.

Floating logistic base with Arc-7 ice class. But "plavuchaya" can be translated as "sailing" as well, so without seeing the speed declaration, I would not guess if that is something like the scientific base they are making now or a ship.
And the small one is a multipurpose supportive icebreaker.
flamming_python

owais.usmani wrote:What are these 2 ships for? Translate their brochure please.

If you look closely

You'll see the brochures include an English-language synopsis already

The larger ship could be a successor for Sovmorput.
GarryB

Basically a big and small support ship that would be used to take supplies to oil rigs or scientific stations or other remote locations.

They are container based so any ship that can carry containers could be supported by these ships and they have their own cranes to load and unload the containers at sea or at port.

Those containers might contain food supplies or weapons or ammo or equipment needed for operations... for instance a science vessel like the ones we have seen above might be stationed near an ice shelf or on the edge of a region it is studying.... after 2 months they might be running low on fresh food or other resources... they might also want extra equipment or have equipment that needs to be repaired, so you can send that small ship with say 6 containers full of food and water and other resources and extra equipment including helicopters and subs and drones or whatever and it could sail out to the science base and load those 6 containers of equipment and material and then take off a couple of containers with rubbish they could not process there as well as equipment that has failed or needs to be repaired beyond the level they can repair in place...

The ship might then return to base or if there are more than one sites to deliver material to you might use the bigger ship that might also be carrying other equipment for a nearby port.

It is much cheaper and much more efficient than using helicopter transport, though it is slower.

It could also be used to deliver container based equipment to outlying airfields and military bases... they have container based anti ship missiles that they could deliver in anticipation of an exercise or because of some expectation of a threat...
kvs

I am sure the Drivel will be squawking that these ships are the ugliest in the world. "Who are you going to believe, me or your lying eyes."

Russia is pushing the development level in such classes of ships. So it needs to have shit flung at it.

I wonder if there is a single firm somewhere churning them out.

Further posts to that effect go there.


The Zvezda Shipbuilding Complex (SC) (Primorsky Territory) expects to sign contracts for the construction of 10 tankers for the Vostok Oil project in October 2021. As a PortNews correspondent reported , this was announced by Konstantin Globenko, Deputy General Director - Project Director of Zvezda, during the business program of the Neva-2021 exhibition. According to him, we are talking about Arctic shuttle tankers for the Vostok Oil project with a deadweight of 120 thousand tons with an Arc7 ice class.

“Such ships were not built not only in Russia, but also in the world. That is, tankers of this size and of such a high class have never been created before. This is a rather unique, innovative project, ”said a representative of the shipbuilding complex.

He noted that to date, the development of the concept design, the basic design has been completed, model tests have been carried out, and the good navigational qualities and icebreaking capacity of the vessel have been shown.

The Zvezda shipbuilding complex is being created on the basis of the Far East shipbuilding and ship repair center by the Consortium of JSC Rosneftegaz, PJSC NK Rosneft and JSC Gazprombank. The pilot loading of the complex is provided by Rosneft, which has entered into an exclusive agreement with DCSS to place all orders for the construction of new marine equipment and vessels at its facilities.

The Zvezda product line will include vessels with a displacement of up to 350 thousand tons, elements of offshore platforms, ice-class vessels, commercial vessels for transporting goods, special vessels and other types of marine equipment of any complexity, characteristics and purposes, including equipment that previously in Russia it was not produced due to the lack of the necessary launching and hydraulic structures. By the time the project is completed, the metal processing capacity of the shipyard will be over 330 thousand tons per year.

Vostok Oil is the largest project not only for the Russian, but also for the world economy. The resource base is over 6 billion tons of premium low-sulfur oil.

The Vostok Oil project includes 52 license areas in the north of the Krasnoyarsk Territory and in the Yamalo-Nenets Autonomous Okrug, where 13 oil and gas fields are located, including the Vankor and Payakhsky clusters. Since 2009, five fields have been discovered in Taimyr - Baikalovskoye, Gorchinskoye, Icheminskoye, Novoognennoye, and in December 2020 - the unique West Irkinskoye field.