Note * - reported to be an upgrade on aircraft transferred to Armenia. From one article I read, serial numbers were from 9-10 9.13S models and 6-7 9.13 models. Suspect the upgrade was bringing all aircraft up to Mig-29S standards.

Total Aircraft ~ 200. Suspect about half of the older models are retired within the next couple years.

Total aircraft ~ 125.  There are reports of flights (4 aircraft) being planned to be permanently posted to Northern airfields (1-3).

3 Su-30 (originally 4-5 purchased for testing. Not sure if can be upgraded to M2 or SM standards)

Kubinka - Su-30SM to replace the Su-27 on the Russian Knights aerobatic flight team
Note - with 96 aircraft that equals 8 squadrons worth. One is split between Lipetsk and Akhtubinsk, another with the Knights plus 5 already formed or forming so that leaves 1 unassigned. My best guesses would be Monchegorsk or Khotilovo.
Chernyakhovsk (Naval Aviation) - is the second Su-24 unit that needs replacing so my guess for the second squadron.
Yeisk Naval Aviation training center - 2-4 Su-30SM

Besovets - has been announced as the next future base, not sure if 1 or 2 squadrons but base has 2 squadrons of Su-27P's presently.
Millerovo - has been mentioned as a future base for 1 squadron.
Kubinka - expect at least a flight (4-6) to be attached to the Russian Knights aerobatic flight team
Note: 98 aircraft equals 8 squadrons worth with 1 being split between Lipetsk and Akhtubinsk. With 3 already committed and if Besovets gets 2 squadrons and Millerovo 1 squadron that leaves 1 squadron unassigned. My best guesses would be Chkalovsk or Khotilovo.

Chelyabinsk - 2 squadrons (the last Su-24M regiment)
Note: if the option on the 16 is picked up and deliveries are ahead of schedule. Would suspect either a 3rd squadron at Khurba or 1 squadron at either Gvardeiskyy or Monchegorsk

Can you shed some light on this, please?

Anyway, keep up the good work. It's really appreciated.

It came from the Director of the Plant manufacturing the Su-30SM.

Su-30cm are manufactured at the Irkutsk aircraft factory under contract with the Russian Defense Ministry and are available in videoconferencing since 2012, and the Naval Aviation - 2014. At the moment, delivered to the troops 61 Su-30cm.

"Until the end of 2018 in favor of videoconferencing and the Navy at the Irkutsk aircraft plant will be manufactured and delivered 55 more aircraft total number will be 116 Su-30cm -. 88 and 28 for the Naval Aviation" - Yamani said.

Heavy Su-30cm one of the first to arrive in 2015 in Syria and how to apply it for its intended purpose - as a fighter and as a targeting aircraft for ground attack aircraft and bombers.

NOTE: of the 61 presently in service 8 in Naval Aviation and 53 in Air Force. So 55 aircraft to be delivered over the next 3 years.

I have counted for 2016 deliveries:

There were suppose to be 8 Mig-29SMT's this year.
mack8

Franco, like always fantastic effort to compile all these numbers and details, many thanks!

Are you going to do an update on helos as well?

I find it very difficult to keep up with the helicopters due to lack of information. Not just on the rebuilds of which there appear to be about 3 dozen a year (upgraded to what standards? Mil-8's and -24's). But also the new builds, generally several months behind if not a year in getting accurate numbers.

There must have been much more Flankers inherited from the USSR, why are the current numbers so low?
Guest

There must have been much more Flankers inherited from the USSR, why are the current numbers so low?

I'll take what is Ukraine, Belarus, and Kazahstan for 100

Su-30SM and Su-34 seem to be the most quickly available, high-volume produced jets of the lot. Russia better keep ordering them for another decade and never look back. 25+ of both per year is not a bad number to replace old Fencers, Flankers and MiGs. That's a solid 250 jets right there by 2026.

Su-30SM and Su-34 seem to be the most quickly available, high-volume produced jets of the lot. Russia better keep ordering them for another decade and never look back. 25+ of both per year is not a bad number to replace old Fencers, Flankers and MiGs. That's a solid 250 jets right there by 2026.

Su-30SM will for sure have new order

Lets see what will happen with MiGs. They will order additional MiG-29SMTs or they will go for MiG-35

"Two drums multipurpose Mi-35 army arrived at the base of the Western Military District in the Pskov region Aviation Three fighting machines Mi-8 MTV-5 arrived at one of the bases, which is deployed in the Leningrad region." - Said in a statement.

Mi-35 is designed to destroy armored vehicles and manpower, fire support motorized infantry and tank units, landing and transportation of cargo in the cabin and on an external sling.

Multi-purpose transport helicopter Mi-8 MTV-5 belongs to the family Mi-8/17. Representatives of this series helicopters are used in health care and search and rescue missions, carry out cargo transportation. To date, it produced more than 12 thousand helicopters series Mi-8/17, which are delivered in 100 countries.

NOTE: as mentioned in another thread. The Mil-35M original two orders totaling 49 aircraft was complete by the end of 2014. However more keep coming in both 2015 and 2016. Unfortunately numbers ordered or delivered have not been made available.
Notio

51 Su-27SM (53 were completed and 2 lost in accidents. Last count only revealed 50 aircraft, maybe one was in an aircraft maintenance plant)
1 Su-27UBM 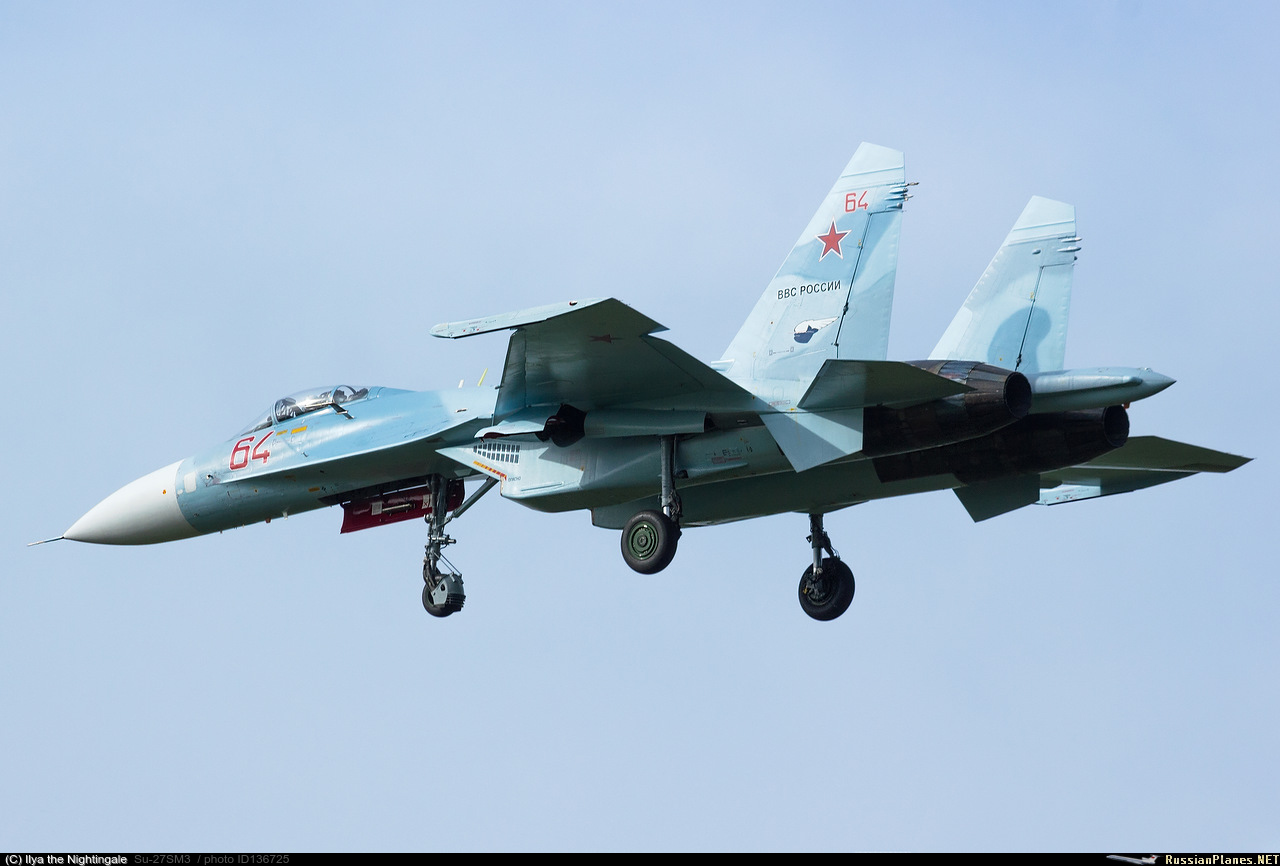 Did you see that blue 01 (Su-27SM) has been repainted as red 49 for the Besovets air base. I guess blue 10 has had similar re-numbering(as it went to Besovets as well), but I haven't seen the new bort yet. The new red 49 appears on video and it can be seen to carry the same RF-95218 code as blue 01 before.
Sponsored content