You can put much larger missiles in these old fixed sites

Also, only thing that can attack them are the ones they are designed to defend against

Plus they already exists and maintenance is much simpler

No need to stop using them

Will be interesting because with the ABM treaty the A-135 was limited to 100 interceptors around Moscow.

I wonder if they will expand the numbers around Mosocow, or if when they replace the existing A-135s around Moscow that they might start basing some around St Petersberg...

With a flight range of 3,000km you could base them anywhere you like really...
Sujoy

GarryB wrote:THAAD is an anti theatre ballistic missile system or ATBM... it is for Scuds and enhanced Scuds at best.

Even the S-300V is better than THAAD except altitude performance... the main difference is that the S-300V actually intercepts targets of all types including much harder targets than THAAD can't manage.

Nudol has a range of 3,000km... that is a huge step up from existing ABM missiles around Moscow and is better than GBI.

It is very difficult to shoot down an incoming missile warhead with an anti-ballistic missile. Ballistic missile warheads are very small (US ones are typically about six feet long and eighteen inches wide at the base and rather resemble a large artillery shell) and travel 10 times faster than a rifle bullet (a typical ballistic missile warhead travels at about 15,000 mph). It is the equivalent of trying to shoot down a bullet with a bullet. In about seventeen tries since 1991, anti-ballistic missile interceptors (sometimes called ABMs) have successfully intercepted eight incoming missile warheads for a success rate of just under 50%. And this was under unrealistic conditions where the defenders knew everything there was to know about the "dummy" warhead's characteristics, trajectory, launch time, and no countermeasures were used by the offense!
George1

It was a Nudol test


The 14TS033 Nudol complex is being developed by Concern East Kazakhstan Almaz-Antey under contracts with the Russian Ministry of Defense dated August 2009 and April 2015. The main element of Nudol is the 14A042 solid-propellant rocket developed by Novator OKB (Yekaterinburg) on the mobile launcher 14P222 (chassis MZKT 12x12). According to Western sources, the 14A042 rocket is equipped with a kinetic interceptor with a multispectral electronic-optical homing head (MOEGSN, 14SH129, developed by AE Nudelman Precision Engineering Design Bureau). The complex also uses a mobile command and computer station 14P078 (on the MZKT chassis). Targeting of the complex is provided by a stationary radar for detecting small-sized space objects 14C031 (object 20Yu6), deployed near the city of Chekhov in the Moscow region. Subsequently, it is believed that the complex should include its own mobile target designation and guidance radar.

The development of the system tested on November 15 has been carried out since 2011. It is designed to destroy both ballistic missiles and spacecraft and will have a mobile version, sources in the defense department told Izvestia.

The radar and the Krona/Okno systems are used for "early warning". I read somewhere that the "Demonstrator" radar (or its final version) will be used as mobile detector/fire control radar. 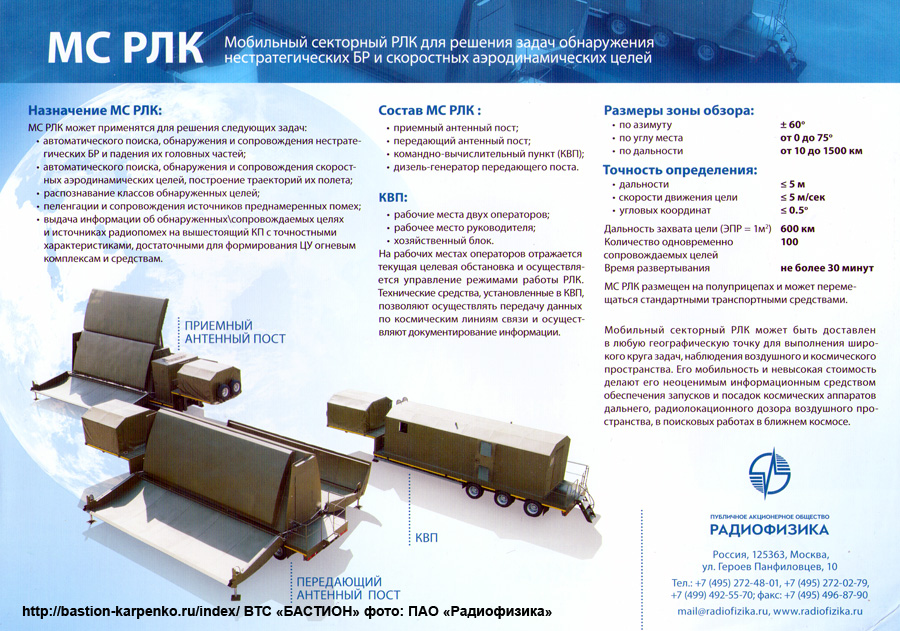 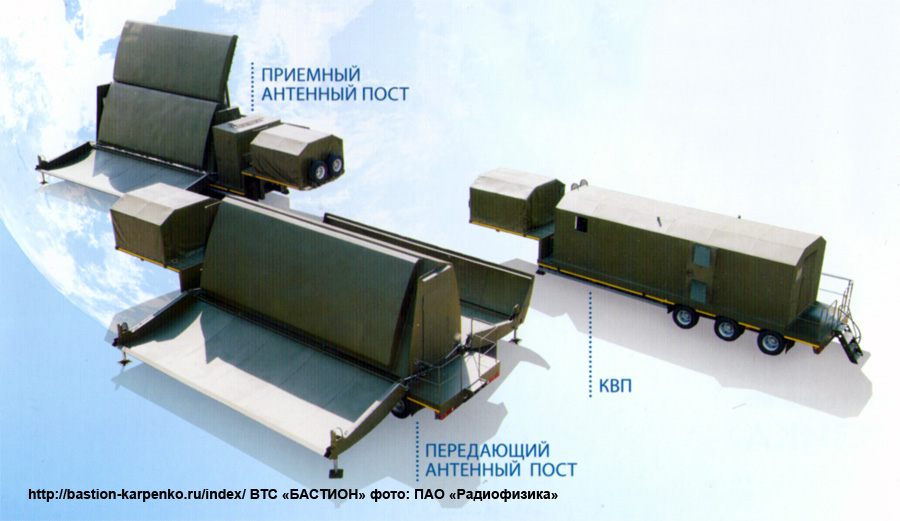 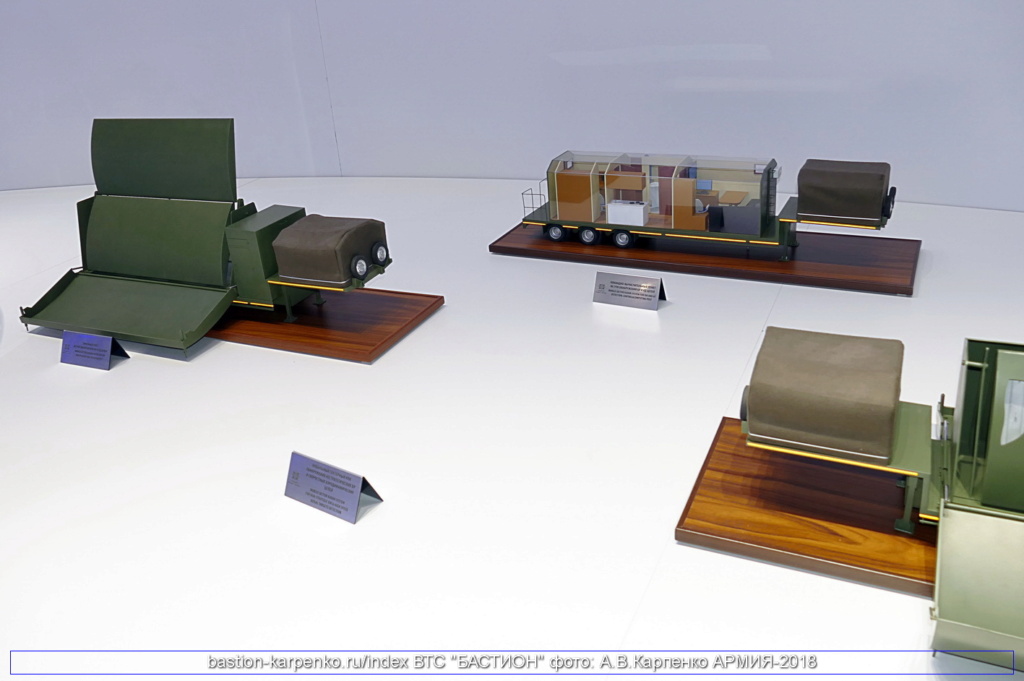 It is very difficult to shoot down an incoming missile warhead with an anti-ballistic missile.

Objects in orbit are actually moving rather faster... they have to to remain in orbit.

The Russians keep track of objects in earth orbit... an enormous number of items... some as small as a chip of paint.


t is the equivalent of trying to shoot down a bullet with a bullet.

And yet they manage to get people up to the space station and back all the time...


In about seventeen tries since 1991, anti-ballistic missile interceptors (sometimes called ABMs) have successfully intercepted eight incoming missile warheads for a success rate of just under 50%. And this was under unrealistic conditions where the defenders knew everything there was to know about the "dummy" warhead's characteristics, trajectory, launch time, and no countermeasures were used by the offense!

Radar and missiles and computers have improved quite a bit since then and I would like to learn more about where you got your information from, but the performance of their guided missiles and radar and computers as I have said have moved on quite dramatically since 1991. 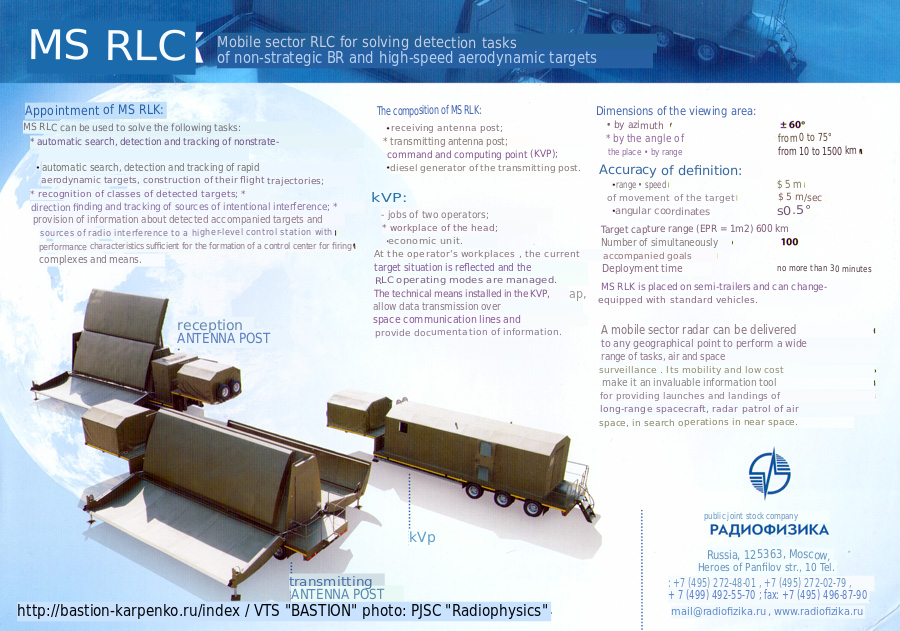 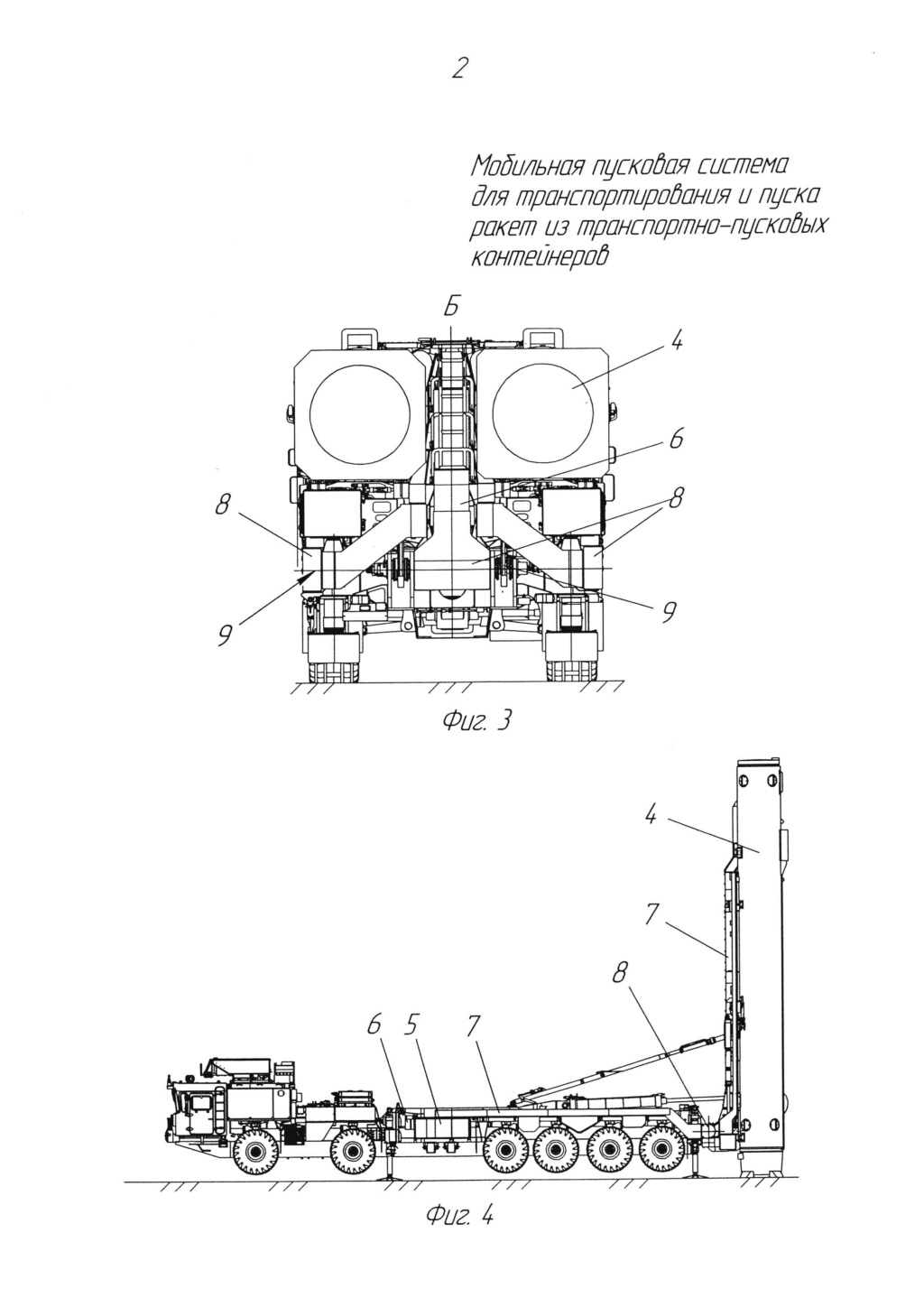 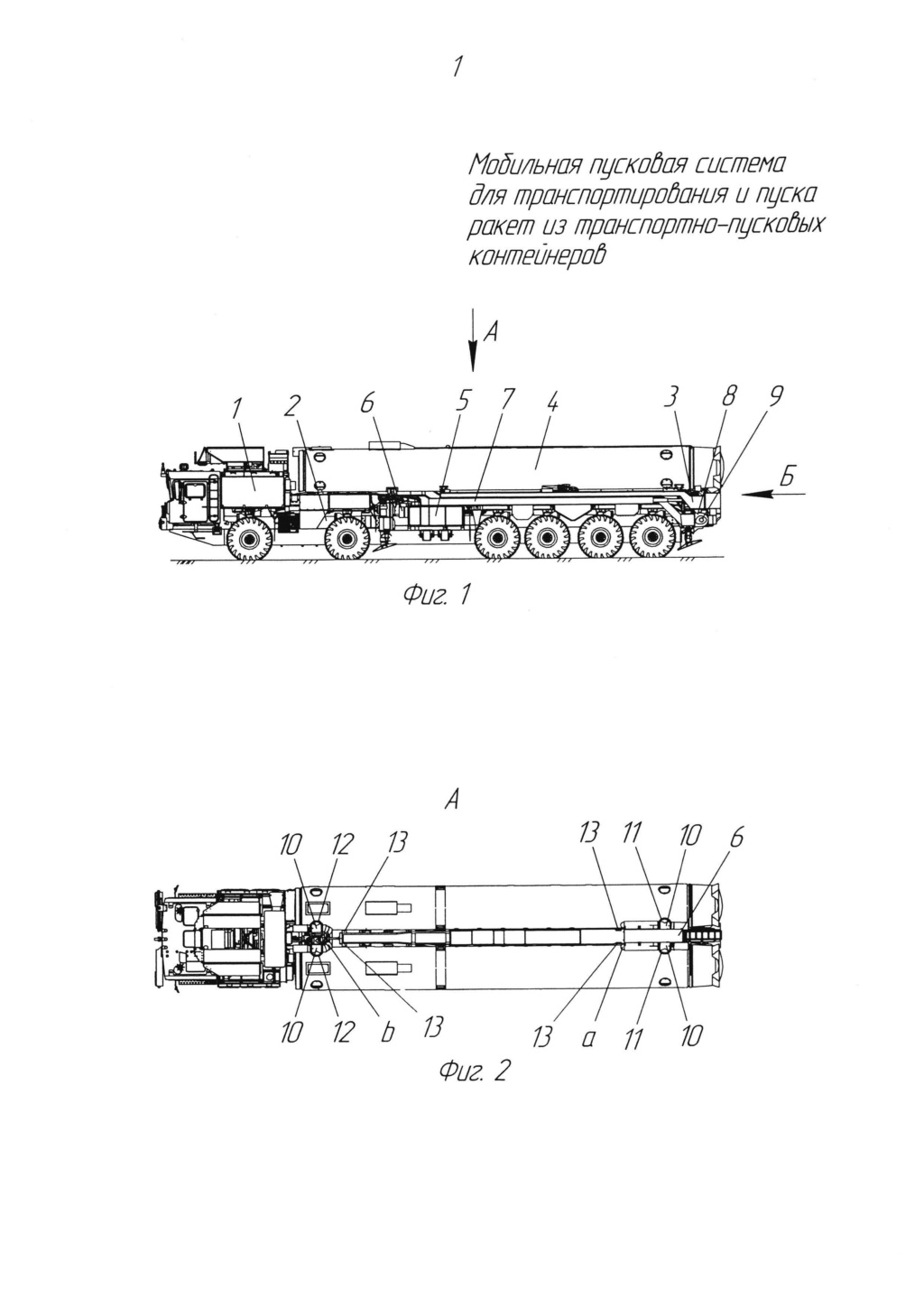 Im trying to find info about what is the difference between Nudol and A-235.

Im trying to find info about what is the difference between Nudol and A-235.

Flanky wrote:Im trying to find info about what is the difference between Nudol and A-235.

Flanky wrote:Im trying to find info about what is the difference between  Nudol and A-235.

Flanky wrote:Im trying to find info about what is the difference between  Nudol and A-235.

Incorrect, both Nudol and A-235 are both full-spectrum land based space defense weapons. Their long development times were the byproduct of the very difficult task of ICBM interception, which is now possible with current 2020's (Russian) technology. On the flip-side the Russian's had the ability to intercept satellites for over 50 years now (since the early 1970's). The USSR engaged in the worlds first ever ASAT test back in 1971.

The Western corrupt media literally calls all Russian mobile ABM's as simple ASAT weapons, otherwise if they called them what they truly were (ICBM hunters) the public would in mass protests demand their plutocrats to deescalate any thermonuclear confrontation with Russia.

They should sanction them, to forbid making it! ... oh wait...

Arthur C Clarke clarified the problem of an anti satellite weapon.... a satellite has an orbit that is generally stable... not necessarily circular, there are many eliptical orbits and some run perpendicular to the earths axis so the satellite is not stationary and has a path that covers the earths surface over time.

The point is that to shoot down a satellite all you need to do is launch another satellite but with the exact opposite orbit. Your anti satellite weapon could be as simple as a bucket of nails that opens when it reaches stable orbit.

The impact of even just a couple of nails at such speeds would obliterate even the largest of satellites in orbit... and that is a dumb expanding cloud of nails.... imagine a guided missile that can see the target and is manouvering to hit it.

The problems involved in anti satellite and anti ICBM/SLBM missiles means often dual purpose missiles are used because getting into space and intercepting warheads and satellites is not that much different to require a different tool... though in the case of the S-500 it seems they wanted something to deal with even more difficult targets so the S-550 was created.

Could one of the jobs of these "ASAT" systems be to guard russian ICBM´s on their way up against possible incoming ABM missiles?
You know... americans launch their ICBM/SLBM´s, russians launch theirs, americans try to shoot them down with their fantastic (

) ABM systems and these missiles are shot down by Nudol/S-500 and so on.

That is very possible, but it would probably be more efficient to use tens of thousands of decoys and have the actual warheads be glide vehicles that out manouver the interceptors.... and of course Thunderbird and Poseidon who deliver their payloads through air and water respectively to the targets.
Hole

No. On the way up = boost phase and beyond, before the missile reaches space. 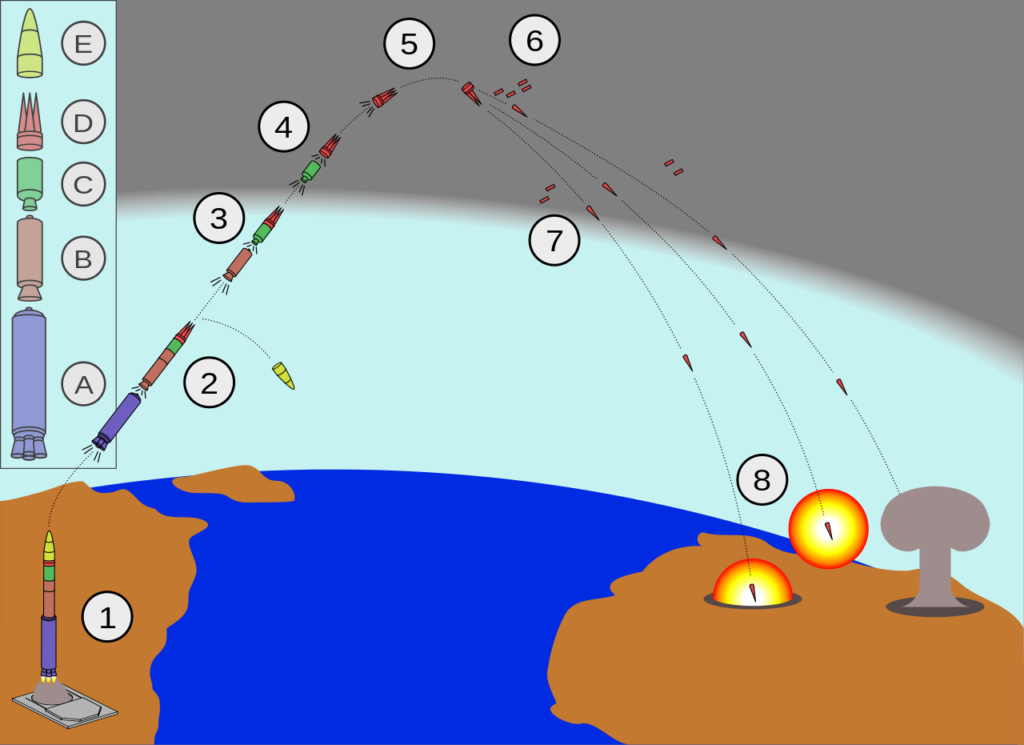 Hole wrote:No. On the way up = boost phase and beyond, before the missile reaches space.

Boost phase interception is the wet dream of the yanquis. It is the most vulnerable stage of the ICBM launch
and the yanquis had big plans to deploy their ABM system on ships in the Arctic Ocean (e.g. Barents Sea).
The Russian "militarization" of the Arctic is a direct response to Washington's war ambitions.

They thought the air borne laser ABL could be used to shoot down missiles in the boost phase, but the obvious problem with the laser being a line of sight weapon you would need to fly the laser within 800km of the launch site... which is deep within Russian territory and not really a safe place to fly a Boeing.

The new Russian rockets have high energy first stage boosters to shorten that boost phase to the shortest possible time period to further limit the chances of direct interference.

Boost phase is theoretically the best time to intercept because the main solid rocket is burning so it is easy to spot and easy to target... just aim slightly above the huge IR plume... but it requires getting very very close to the launch areas of your enemy which are generally too well guarded to operate anything big and powerful enough to get the job done.
Hole 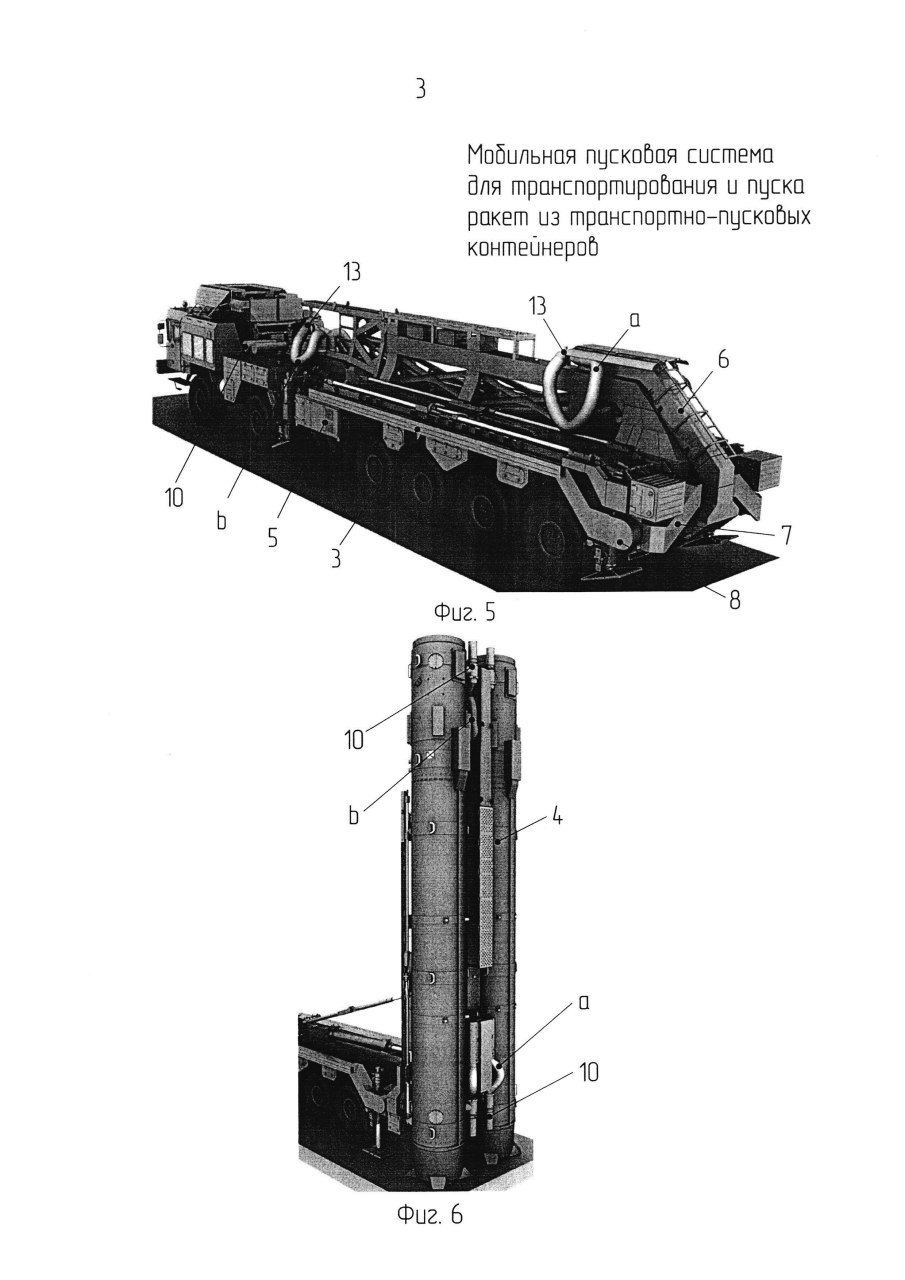