I think that can largely be mitigated by creating a gun launched UAV with laser targeting equipment.

Actually there should be some medium sized UAV unit attached to the artillery batallions that would give recon, fire control corrections and target designation to the artillery, also if Army ever get its own aviation there should be dedicated helicopter platform on KA60 (i guess this is the best choice) to be used as flying command post and target designation for artillery. Creating good network of systems that can designate targets is very important and Russians should invest it imo, one soldier in company can carry laser designation device, that is not much of an issue to provide one such device on 100-150 soldiers.
George1

Cant find any details for this 2S33 spec online.
Whats the specs for this modernized 2S33 Msta-SM, what all have changed w.r.t to the 2S19 Msta-S in this upgrade? Any chance for a longer caliber gun, say 52cal from the current 39cal?
Guest

Dima wrote:Cant find any details for this 2S33 spec online.
Whats the specs for this modernized 2S33 Msta-SM, what all have changed w.r.t to the 2S19 Msta-S in this upgrade? Any chance for a longer caliber gun, say 52cal from the current 39cal?

From what i am aware original MSTA-S is using L47 gun.

"It is fitted with a 152-mm / L47 howitzer, which is similar to that used on the 2A65 Msta-B towed howitzer, additionally fitted with an semi-automatic loader and fume extractor."

Only thing i found about SM some months ago that it has improved navigation equipment.
GarryB

AFAIK the new guidance kits for standard artillery rounds include GLONASS and steering fins and can be fitted to standard shells as a normal fuse would be fitted.

the low cost means they can be used as standard fuses, yet offer greatly improved accuracy over standard shells.

10m CEP has been reported.

Obviously with an area target you could calculate a pattern for the individual shells to be targeting to get a nice uniform distribution of shells too so even with area targets the guidance kits would be useful.

Artillery batteries will have a range of recon resources that will likely include light and medium UAVs as well as helos like Ka-52 to find targets whose coordinates can be transmitted back to the artillery unit to rapidly fire on the targets.
George1

The guided shells as mentioned requires laser designation. Such shells might be more ideal for mobile targets such at heavy armor.

This contract seems logical to me, simply because the production of the Koalitsiya cannot start until the Armata platform's production is ramped up to a certain point.
GarryB

This contract seems logical to me, simply because the production of the Koalitsiya cannot start until the Armata platform's production is ramped up to a certain point.

MSTA is not Koalition...
Benya

MSTA is not Koalition...

I know, but Koalitsiya will replace Msta.
GarryB

There are plenty of improvements in the new model MSTAs that makes them rather more useful than the vehicles being retired or refocussed.

The 2S3 is obsolete... even in the newer models and keeping those vehicles in service just keeps another chassis and engine and transmission in service to require spares for and trained service personel.

MSTA is a good vehicle but now that Koalition is practically ready they should not build a huge number of a model on the verge of being replaced.
George1

Russian self-propelled guns (SPG) will soon have the possibility to replenish ammunition with the help of unique support reloading vehicle, newly designed for the Russian military.

Based on Armata Currently known under the technical name Izdelie 2-F66-1, the vehicle was developed by the Burevestnik Central R&D Institute. It is based on the KamAZ-6560 eight-wheel chassis.

The new vehicle is equipped with a special manipulator which enables instant resupplying of an SPG without involvement of its crew. "

As for now, the vehicle has undergone government tests. Deliveries to the armed forces will begin next year," a Burevestnik representative told the Russian newspaper Izvestia.

The newest vehicle will be delivered along with MSTA-SV self-propelled howitzers, which were contracted by the Defense Ministry in September.

On the outside, the new reloading vehicle looks like an ordinary truck with a container mounted in the cargo box. Inside the box, there is a revolver-type reloading system which contains 92 artillery shells. Controlled by the operator, the system rotates and delivers a projectile to a special manipulator resembling a human’s arm. The manipulator grabs the projectile and puts it in the loading mechanism of an SPG.

Until now, having run out of ammo, SPG units had to leave artillery positions for a safe place where they could replenish ammo. Traditional reloading is time-consuming because it is done manually by the crew. The new reloading vehicle will accelerate the procedure several-fold. If previously reloading usually took up to several hours, the 2F66-1 can reload 50 shells in just several minutes.

"Each artillery division will receive one 2F66-1 reloading vehicle. Its capabilities will increase the firing rate of artillery units by 2-3 times and seriously reduce the reloading time," a Defense Ministry source told Izvestia.

Currently, analogues of the 2F66-1 are used with the newest Swedish howitzer Archer. It is based on the Volvo A30D chassis and can carry over 40 shells. Analogous reloading vehicles are also in service with the French military, working with the Caesar self-propelled gun.

The introduction of the 2F66-1 is a serious step to accelerate and facilitate the work of artillery units, military expert Viktor Murakhovsky said.

"In addition to an automated fire management system, a support reloading vehicle is an important step to increase the efficiency of the Russian artillery," he said. "The MSTA can perform eight shots a minute and, as a result, it runs out of ammo in just a few minutes. The use of automated reloading vehicle allows for rapid reloading and increased firerate." 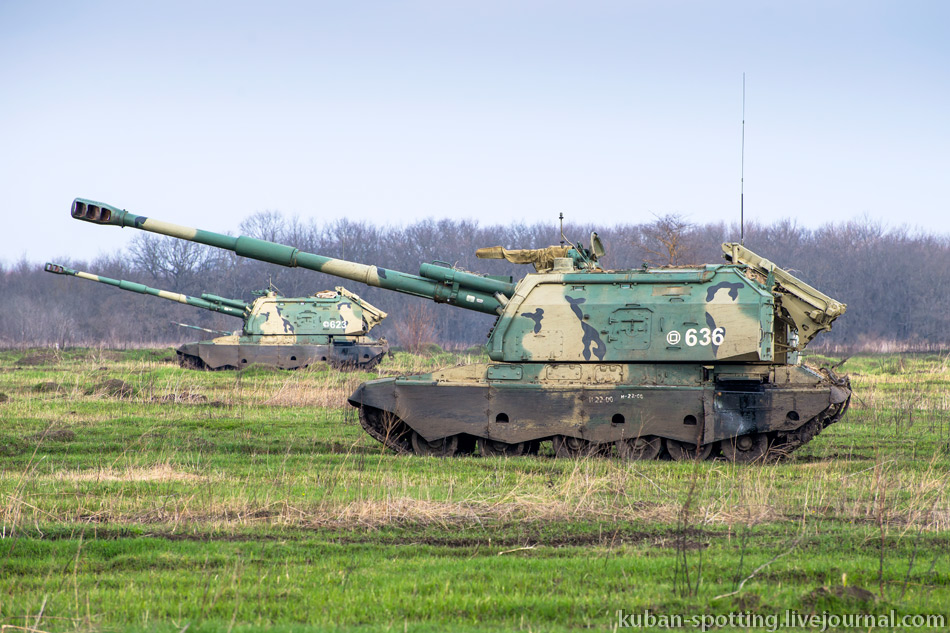 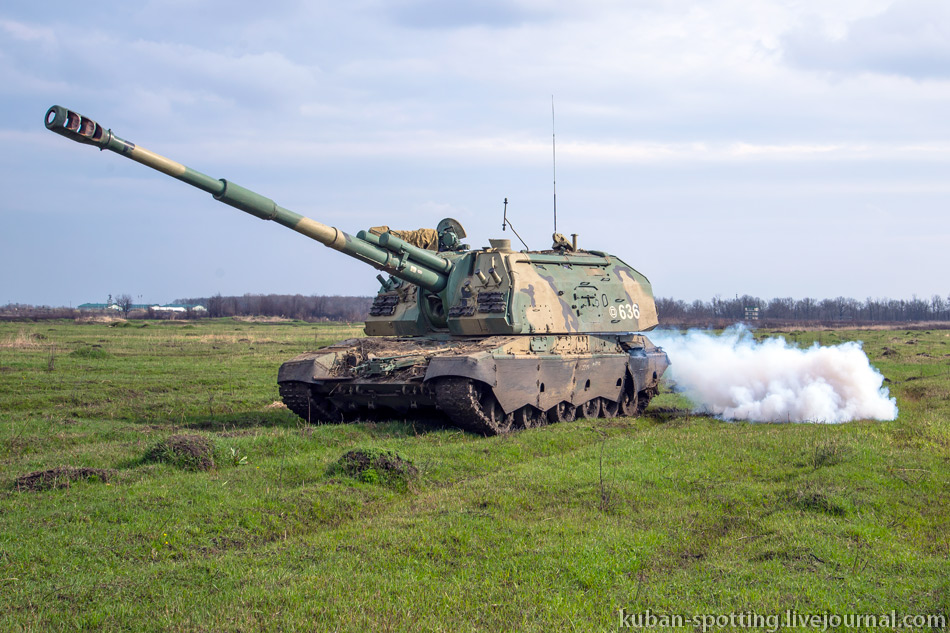 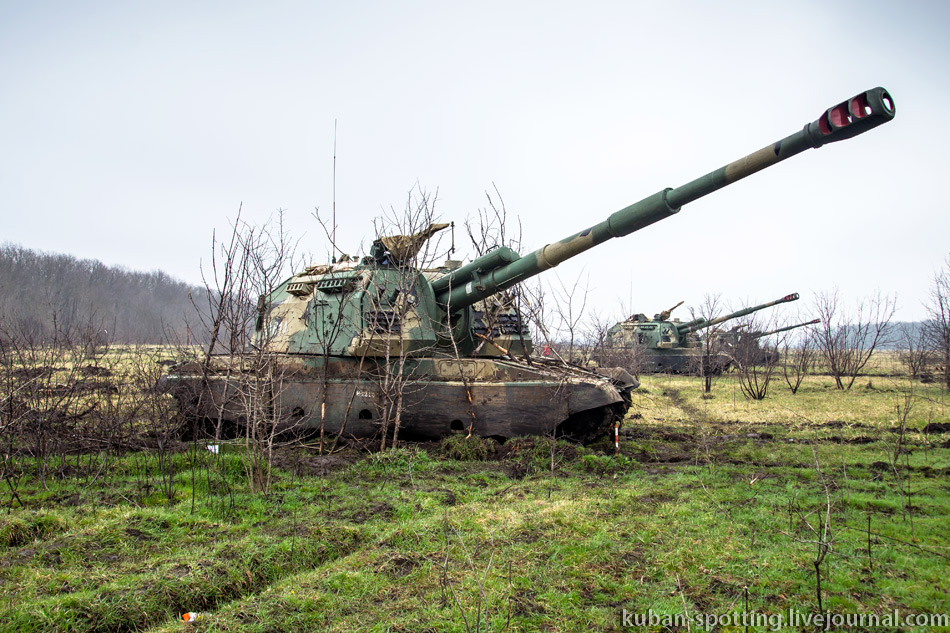 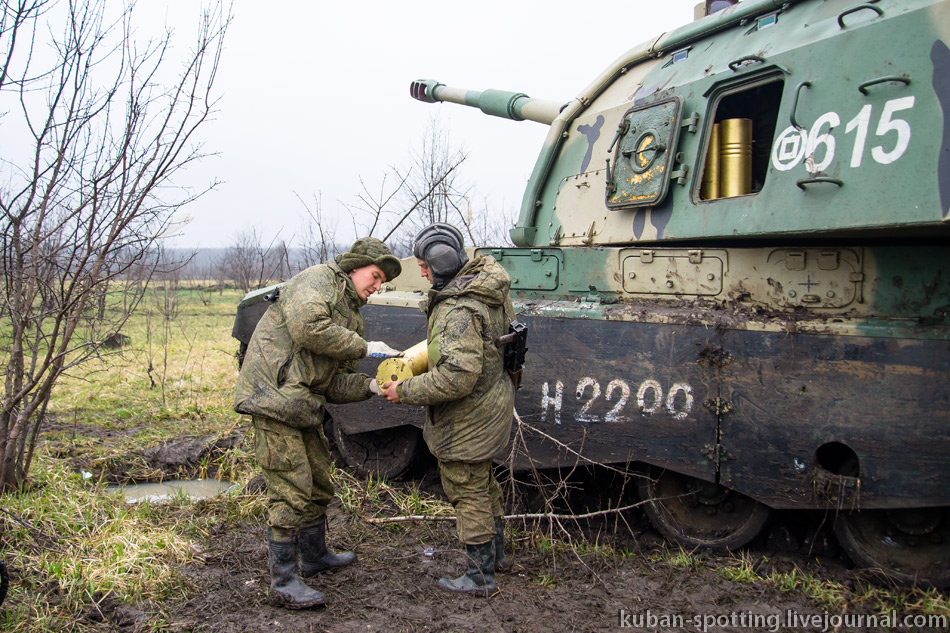 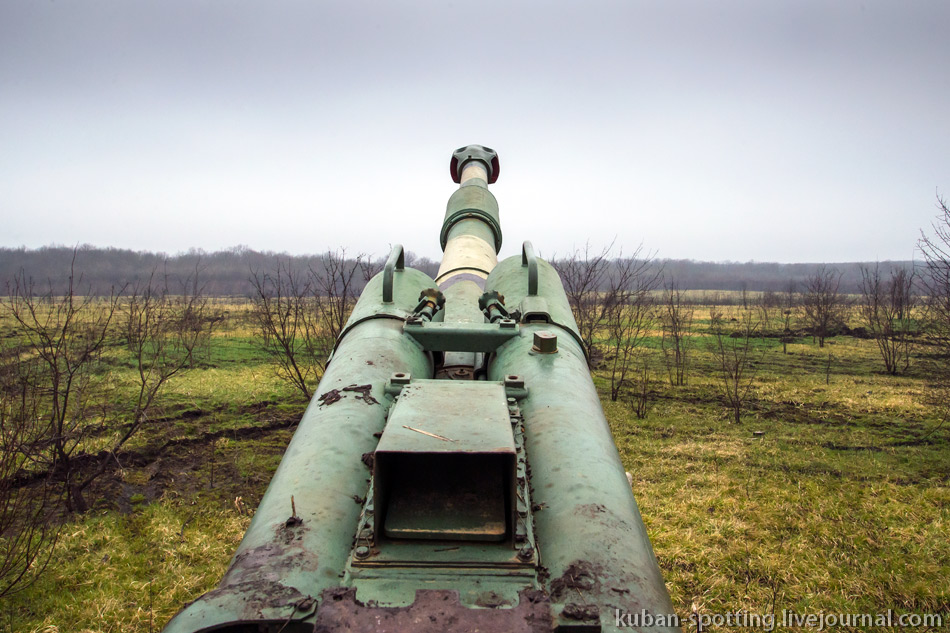 Seems that newly formed 236th Artillery Brigade(ABr) of the 20th Guards Combined Arms Army(GvOVA),(ZVO), has received more than 10 2S19M2 SP howitzers and is to receive around 10 Shturm-S(9P149 ?) by the year end:

Article on the 2S19 listing total numbers produced by years and listing the units operating them.

In response to the deployment of Crabs in Poland and Panzergaubits in Lithuania, Msta-S appeared in the Kaliningrad region.

KALININGRAD, May 8. / Tass /. The Msta-S self-propelled artillery installation (SAU) will be demonstrated for the first time at the Victory Parade in Kaliningrad, the press service of the Baltic Fleet reported.

"The modern self-propelled artillery installation Msta-S will take part in the military parade to be held on Victory Square on May 9 in Kaliningrad," the press service said.

A spokesman for the press service noted that the first batch of more than 10 Msta-S self-propelled howitzers in February 2019 entered service with the 11th Army Corps of Coastal Fleet.

it looks like all the artillery brigades of the Ground Forces and the Coastal Forces of the Navy transferred to the new states in two divisions of 152-mm guns. It remains only to find confirmation of the presence of two divisions in the 227th artillery brigade.
some pictures from the photo essay "A night rehearsal for the Victory Parade took place in Kaliningrad." May 5, 2019 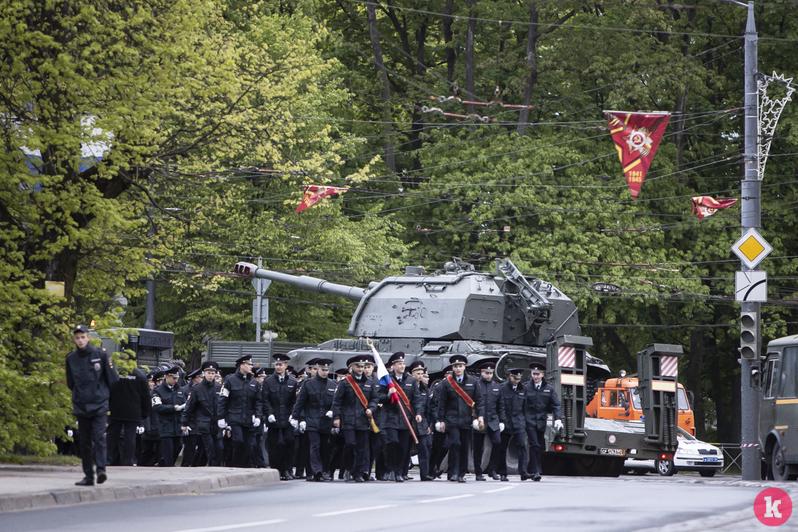 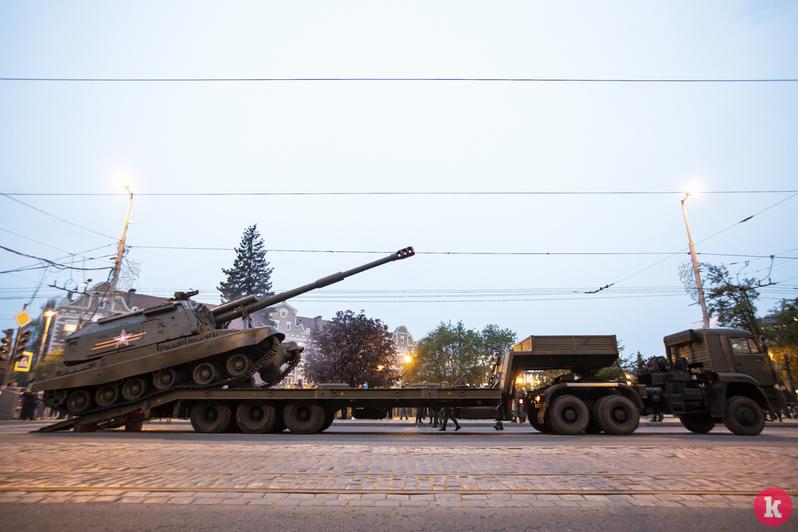 To be clear regarding guided artillery shells, they have new guided shells using GLONASS guidance kits that are basically a rather large fuse you fit into the nose fuse position on an artillery shell 152mm or larger calibre and it includes control fins and a GLONASS guidance package that will land the shell within 10m of the target at pretty much any range the shell can reach. Such rounds are ideal for use against fixed or stationary targets and can include any new or old rounds because the guidance package replaces the old fuse mechanism so it can update old rounds as well as new ones.

With Ratnik most soldiers will be able to mark targets on a battlemap that is transmitted to all supporting forces that can be used for targeting in near real time.

In Syria the Krasnopol guided shells were widely used against moving targets like Toyota light trucks because they had UAV laser target marking support.

The Russian and Soviet Artillery forces were really the main users of UAVs, they had the Bumblebee system for decades, though it was rather modest in terms of performance it was the most used UAV in the Russian military before the Georgian conflict made them realise it was cheap and simple and effective...

I rather suspect they have a wide range of recon and target marking UAVs right now in the artillery brigades because they find them rather useful for finding target coordinates accurately, identifying targets properly (so you use the correct calibre and type of artillery as well the correct number of shells to deal with it), and also to observe and correct fire during the attack and of course to survey the aftermath and see if a follow up attack is needed.

Now they can also mark moving targets with lasers to ensure the minimum number of rounds are needed for the job.
George1 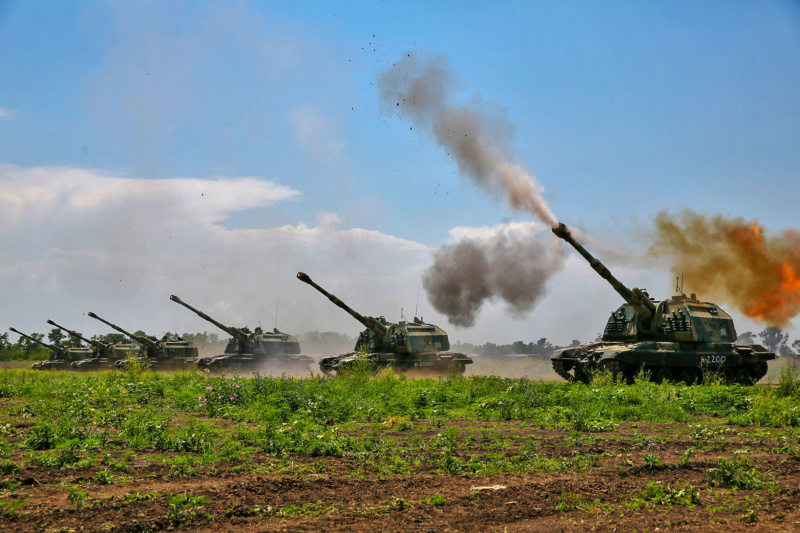 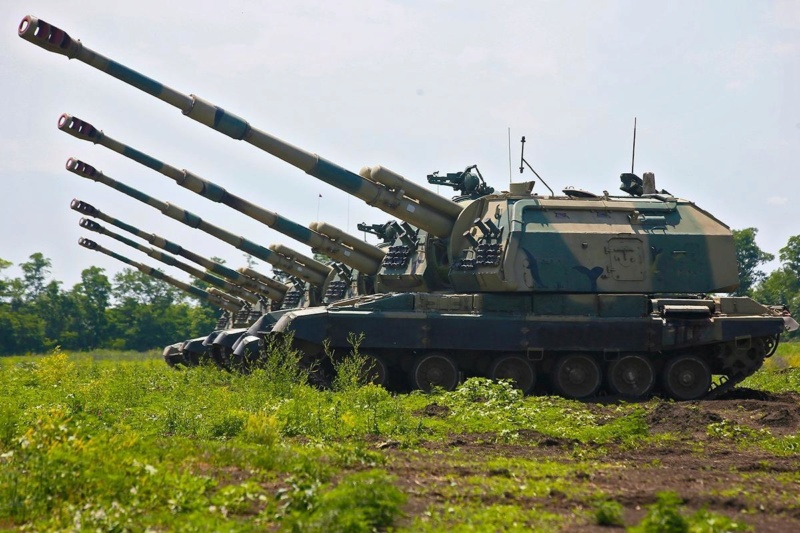 The Russian Defense Ministry finally delivered photos of self-propelled 2S19M1 "Msta-S" 2nd howitzer self-propelled artillery battalion of the 227th artillery brigade of the 49th All-Army Army of the Southern Military District. Eighteen guns were delivered to the brigade in the spring of 2019. And this means the completion of the transition to the new state of eleven artillery brigades of the Land Forces and the Navy. Now, in brigades there are two divisions of 152mm caliber guns, one jet division on the 9K57 (BM-27) “Hurricane” machines and one anti-tank division. Two more art brigades (45th and 385th) have their own special staff. In the near future two more artillery brigades will be formed - one for the 8th Combined Arms Army and one separate for the Airborne Forces.

MSTA-S Video showing inside the vehicle...lots of screens and displays so these must be the new upgraded M2 model (see older post, top of the page)

The updated technique is designed to combat mortars, armored vehicles and field defenses

YEKATERINBURG, December 30. / TASS /. The Msta-S howitzer batch was delivered by Uraltransmash (part of the Uralvagonzavod included in Rostec) to the Russian military. This was reported to TASS on Monday by the press service of Uralvagonzavod.

Uraltransmash, within the framework of the state defense order, sent a batch of modernized self-propelled howitzers 2S19M2 (Msta-S), ”the press service said.

During the modernization, the company specified, the fire control systems and driving characteristics were improved.

Uraltransmash is the only manufacturer of self-propelled artillery guns in the country. The first release of products is dated September 8, 1817. Over the past more than 200 years, gigantic experience has been accumulated, unique technologies have been created, mastered and tested. Today, the company specializes in both military and civilian products.