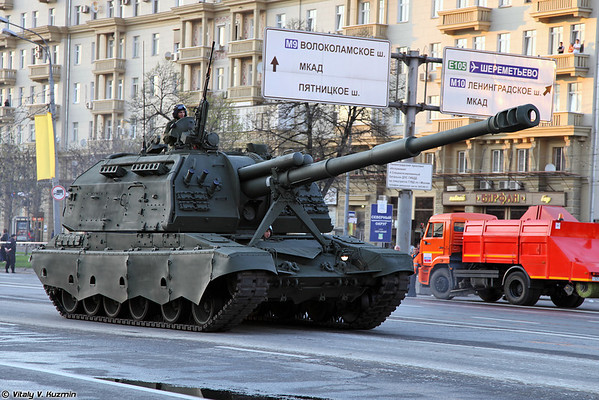 Likely upgraded with new stuff being developed for Koalition...
Vympel

Isn't that article saying that 108 were delivered under the 3 year contract - i.e. 93 before the article and 15 which are the subject of the article?
Vann7

Im confused , you mean 201 piece in service of the new M2 upgrade?
According to Globalfirepower.com   Russia have 5,990 self propelled guns.. so if we count the older models and new
upgrades that should be 5,990 + 201 = 6,191 self propelled artillery in service.  But maybe that number include other type of artillery that is much older and cheap..  perhaps the question should be.. how many Msta 2s19 older models have Russia Armed forces in service.?  anyone knows?


About the Russia Arms Expo 2015..Im very interested not only in armata main battle tank but also Koalition next generation self propelled artillery and Russia next generation rocket artillery too.. that supposedly will have a 200km range ,which if true it will be a game changing weapon ,specially if their precision is acceptable at that distance .
Cyberspec

these are new pieces or modernized 2S19??

I'm guessing the video below refers to the improved M2 variant....if so, it looks like they're new built


It was created based on the famous SAU "MSTA-S" and like her looks like two drops of water. But in spite of this, almost all of its technical characteristics are improved.

"This machine is different from its predecessors in principle. This is something that increased her rate, a completely new set of control loading mechanism, and, consequently, improved automated driver's seat mechanics "- said Mikhail Sitnikov, Engineer 5584 Agency of the Ministry of Defence.

From gadgets - for the crew in the car appeared conditioner. Also now a driver can see all the parameters of the machine on a special display. And hand-gunner has an automatic guidance system of fire.

whats are the improvements that 2S19M2 have over basic 2S19M/M1?
Any improvements in range and is there any plan for longer caliber version of 152mm like the 2S19M1-155?

Production and modernization of 152-mm self-propelled guns to "Uraltransmash"

On the basis of the schedule of procurement "Uraltransmash" for this year, we can assume that the company intends to transfer the Russian Armed Forces 18 ACS 2S19M1 and 36 - 2S19M2.

Ok, we all know the koalitsia, but let's stay down to earth.

Any comparable SPG outdoes the 2S19M2 in any way? maybe the Pzh 2000 have more range? but, how automated are others SPG, 2S19 has the edge for me in that aspect, as well as having fantastic mobility and good armour.

The M109, even M109A6 are simply crap compared to it, almost everything is manually done! and the chassis is totally obsolete... The 2S3M2 in fact outclasses any M109 variant for mobility and automatisation...

If not the best, it's very close to the top. Seems to be amazing all around, not weighing too much (Pzh), having a good amount of automation like you said....

The A6 is a POS on all accounts.
cracker

Why USA never bothered developping its self propelled artillery like russia? It's just amazing to see that with 10x the budget or russia they can't find a proper replacement for this 1960s piece of *******

I think it's because they rely mostly on airstrikes.... While russia relies mostly on ground units, solid mechanised ground units like in the cold war.

The french AU-F1 (amx-30 based) is nice looking, but i reckon it's very inferior to the MSTA-S.

And wheeled SPG like the archer or caesar, while cheaper and lighter (air transportable), they are very different: need men outside like a towed gun, need supply trucks, can't follow armored brigades, and it's dead if caught even by light infantry, while the MSTA are fully enclosed, have potent armour, and a defensive armament, + the gun can direct fire.

I wouldn't put Archer and Caesar in the same sentence, Archer is fully automated, and includes RWS for self defence etc.
Samsung K9 should also probably be on this list.
Regular

The G6 is a fantastic artillery system.
Cucumber Khan

Well, I think a lot of that is because of the highly sophisticated guided munitions that the US deploys. That's definitely something the Russian Military have to start investing in, rather than the fire-a-lot-of-shells-in-the-general-direction-of-the-enemy-and-hope-that-one-will-hit tactic.
Werewolf

Well, I think a lot of that is because of the highly sophisticated guided munitions that the US deploys. That's definitely something the Russian Military have to start investing in, rather than the fire-a-lot-of-shells-in-the-general-direction-of-the-enemy-and-hope-that-one-will-hit tactic.

Where do you think americans have the idea for self-correcting artillery rounds from? From russian MSTA-S, their work of Paladin is based on MSTA-S which they acquired sneaky via proxy customer Morocco.

Russia had modern self-correcting artillery rounds in the last century, the US came up with them just recently due to russian work and still they can not field a modern Artillery into service. Russia was the first country to develop a modern artillery with smart ammunition and digitalisation of the firing plattform in 1988 with several modifications over the past 30 years.

The time the US fields a new modern Artillery to its army units, germany will already develope a successor for Pzh2000.
GarryB

Most US 155mm shells are dumb shells. They were developing a smart guided shell called gladiator or something like that, but it cost $50,000 per shot making it a fairly expensive round.
The Russian equivalent costs 50 times less and is much ore affordable... and is an electronic fuse and guidance and controls system attached to the standard nose fuse position of a standard shell...

Well, I think a lot of that is because of the highly sophisticated guided munitions that the US deploys. That's definitely something the Russian Military have to start investing in

Let me add to the posts above (which also answer your question) with a few extra things to think about.

The highly sophisticated guided muntions that the US deploys - it deploys in low-intensity Talib warfare where it can afford expensive, high-tech ammo - simply because it's just not depleted that fast.
Add to the fact that the Talibs, Iraqi insurgents, etc... never really travelled around or fought in large groups or formations, as well as usually on foot - making them tough targets for artillery as they can duck and find cover as soon as the first shell hits.
This adds up to having to expend a large quantity of ammunition - just to destroy a few lightly-armed insurgents.
Then you have the factor of collatoral damage too; with insurgents usually popping up among civilians and civilian infastructure.

Together this all makes guided munitions pretty neccessary for those conflicts.

Rest assured though that in a full-on intense conventional confrontation with anyone serious, all those fancy shells would run out within a day, and the only realistic or economical option would be dumb munitions. This is the reality.
For anyone with a mind to fight a conventional war - dumb shells have always been a far wiser option with guided shells only available in small quantities, to be used in conjunction with SF operations and so on. This has pretty much been the Russian approach, not-coincidently.

Up until recently Russia has had only had the Soviet-developed laser-guided mortar and howitzer shells (which France and others bought and which were among the first of their class in the world; having been developed in the mid 80s); which were expensive, designed to work in conjunction with artillery observers, and reserved for specific tasks; for example smashing armour columns with precision hits on their top armour as was done to those Ukrainian armour columns were taken out last summer or so rumour has it.

It is only recently that Russia has started investing in GLONASS guided shells; given that its GLONASS constellation has only reached full operation within the last 2-3 years. Russia has been busy upgrading its artillery with GLONASS integration/targetting, and have probably been buying up these shells for many of these systems too. Such shells can be set with GLONASS coordinates, and will gently guide themselves to that location while in flight.
However while they are guided, and accurate - they are not really 'precision guided' in the sense of what you are talking about - as they are not capable of being guided to a target (other than an immobile one with a precisely known position) nor do they have any sensors for determining targets and homing in on them. They simply guide themselves more precisely to a coordinate than dumb shells do and land in a much tighter group.


rather than the fire-a-lot-of-shells-in-the-general-direction-of-the-enemy-and-hope-that-one-will-hit tactic.

When there are a good amount of targets within the artillery system's CEP at that range - there's a good chance that a lot of those shells will hit something; and guided munitions in that case become a little superflous and wouldn't really add anything that a good old artillery barrage with conventional ammo wouldn't accomplish.

The 'tactic' is to cover a square (or circular rather) area in explosions within a minimal amount of time, destroying anything there that dares to cling to life. Why would guided munitions be any better for accomplishing that then dumb munitions?
TheArmenian

Apart from being very expenses. Guided or corrected shells like Krasnopol and Copperhead have another drawback: They need a spotter relatively close to the enemy to "laze" the target.
So the usage of this kind of shells is restricted and lacks the degree of freedom enjoyed by regular dumb shells that have been used for decades, or even centuries.
magnumcromagnon

I think that can largely be mitigated by creating a gun launched UAV with laser targeting equipment.
GarryB

Why USA never bothered developping its self propelled artillery like russia?

Funny... I remember in the 1980s there were plenty of western experts wondering why the Soviets had so many towed artillery pieces and so few self propelled weapons... the common conclusions were that it was cheaper and they didn't care about the safety of their artillerymen.

The reality was most likely that it wasn't a large priority as they had rocket artillery on trucks already that was very mobile.


I think that can largely be mitigated by creating a gun launched UAV with laser targeting equipment.

Indeed the Smerch has the E90 rocket launched UAV, but artillery units have long been the main forces in the Soviet and Russian military who have been interested in UAVs... with the Bumblebee being the most widely used UAV in the Russian military for some time... now of course eclipsed by more capable systems....
Sponsored content