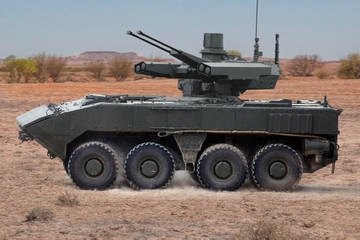 I don't really see the point of such vehicles. The gun is good against tanks but it is unlikely it survive such engagement. And its ability to carry soldier is reduced and most wouldn't want to get in near 125mm shells that aren't protected and even 30mm gun could detonate.

This vehicle wont be a troop carrying tank... it will be a tank and it will operate in forces entirely wheeled... if the enemy have a lot of tanks they wont be operating this sort of vehicle, they will more likely use Armata based vehicles or Kurganets.

Imagine these vehicles being used in Afghanistan in a coin type operation, their light weight and mobility means they could operate in places tanks simply could not get to... don't be fooled by the fact these vehicles are wheeled... they are not 12 ton BTRs... they are more than double that weight and comparable to the Kurganets which are also about 10 tons heavier than the BMP vehicles westerners compare them with.

With full ERA and APS and other defence systems fitted they will likely be rather well armed and equipped.... I suspect this vehicle with a SPRUT turret is intended for the light tank role... for actual tank roles with a Boomerang division the 125mm gun armed Boomerang will likely have the T-14 turret fitted with all its sensors and tank related equipment to find and hunt tanks.


Against any other vehicle than tanks the 57mm with apfsds is more than good and most new turrets have built in atgm launchers to deal with anything at long distances.

A Boomerang will be sent to deal with problems that don't require heavy armour, it will be much cheaper than tracked vehicles and much faster and more mobile too... if the enemy only have a few tanks and they are obsolete then a Boomerang for will be fine... a bit like the Bradleys in Desert Storm against T-54s... except the 125mm gun and optics could hit stationary targets at 5km range and the tank gun fired missiles moving targets at 5km too.


As the deputy chief designer specified, " it is assumed that the wheeled Sprut will be export-oriented." Budaev explained that the use of a wheeled tank in the Armed Forces is less likely, since priority is traditionally given to tracked chassis, taking into account the peculiarities of the Russian geography.

They might end up with a Sprut turret on a Typhoon 6x6 light vehicle with the Boomerang able to take the T-14 turret...

These tank vehicles will be tanks and not troop carrying tanks.

It is possible they might look at the 100mm gun of the BMP-3 and create a high pressure version with a smoothbore barrel and APFSDS rounds equivalent to the Israeli 60mm round for use against previous gen tanks... a fin stabilised HE round and a new APFSDS round and of course the ATGM would be a useful gun for a light wheeled vehicle to take on other light vehicles and previous gen tanks.


The future and present of the Russian army

Not really... the BTR-82A turret with a 30mm cannon is certainly the present, but the upgraded BMP-2 Berezok turret will only likely be fitted to existing vehicles as an upgrade I expect like BTRs and BMPs... for the new vehicle families it might be interesting for export, but for Russian use I would expect the Ephocha turret with the 30mm cannon and Kornet-EM and Bulat ATGMs for the Kurganets and Boomerang and Typhoon vehicles and 57mm grenade launcher with Kornet and Bulat ATGMs for the Armata vehicles.

Very simply their armoured formations are going to need tanks and so a Kurganets and Boomerang and Typhoon division will need vehicles that are essentially gun platforms... ie tanks.... for the next few years will older vehicles are still in service then that vehicle will likely be an upgraded T-72 or T-80 or T-90 depending on the unit or force they operate with... eventually though such vehicles will have problems keeping up with light tracked vehicles like the Kurganets and wheeled vehicles like Boomerang and Typhoon and so tank based versions will be developed... it is not critically urgent... testing the T-14 and getting it working makes sense before you cascade that design to other platforms.... but eventually all the old obsolete types will need to be replaced with the new vehicle family types... they wont need to invent 27 x 5 different vehicles.... Armata, Kurganets, Boomerang, Typhoon, and the two chassis Artctic tractor versions make sense so having the 27 odd different vehicle types for each vehicle family makes sense... for the tank model they might even end up with two versions... a T-14 type with the T-14 turret and a Sprut type with a Sprut turret for each vehicle family, so the T-14 and a Sprut version for Armata and for Kurganets and Boomerang and Typhoon and Arctic tractor... sharing the same optics and systems and sensors and guns and weapons and equipment.... no need to reinvent the wheel here.

There might not be a 152mm Coalition equivelant for the Typhoon family of four and six wheeled light vehicles... they might go for 122mm artillery rocket version using 122mm S-13 aircraft based rocket pods or some such solution etc etc.

Ironically the BMPT could just be a T-15 with the troops replaced with extra ammo... it has the fire power of the BMP-T and ammo capacity instead of troop carrying capability, plus the armour of a tank... the BMPT is essentially redundant for an Armata force... but for other forces a fire power vehicle could simply be the 2S38 57mm gun air defence vehicle based on each vehicle family base as a fire power vehicle...
flamming_python

The fook is that?
GarryB

Photoshop by the look of it.

The new turrets are designed to be transferable... including that 57mm gun version that can be used on ships as well as land vehicles.

The idea behind the Boomerang and Kurganets and Armata and Typhoon and the new arctic tractor types is to replace all the old types.

In the past they have had BMP and BTR and BRDM as well as MTLB and GTSM and even T series tank based vehicles, from engineer vehicles to ATGM vehicles and everything in between.

The problem is that they were all upgraded too so you might find a modern tank division with all three different types of BMP in service with that unit from BMP-1, BMP-2 and BMP-3 which does not really help unless you upgrade them all to use the same engine and wheels and tracks and transmission etc etc.

The new solution is to base all the engineer and artillery and scouting and other front line armoured vehicles on these five platform families.

Obviously the lighter wheeled vehicles will be cheaper and mobile but might not be suitable for all roles... a Typhoon vehicle probably could not handle the engineer and armoured recovery roles in an Armata unit because it might not be able to tow an Armata vehicle that has broken down... but the idea is to not mix the units so an Armata division would have Armata based vehicles across the board... making them rather more expensive, but unifies their armour and mobility and performance.

Typhoon vehicles will operate in Typhoon divisions that may not even have a 152mm artillery vehicle... or if it does it will be the truck based version with the turret or perhaps the simplified 2S43 Malva, which could use the engine of the Typhoon family in the 6X6 version so engines and wheels and transmissions are the same so the support units don't need to carry spare parts for ten or more different engine types and different wheel and track types etc etc.

The point is to build families of each type of armoured vehicle so for instance the MBT tank vehicle can use the T-14 turret and other systems developed for the Armata based vehicle fitted so they don't have to reinvent the wheel.... make the best and then copy across the vehicle families.

The point is that the difference between a T-15 and a T-14 is mostly the turret so you can switch between jobs by swapping turrets too.

Upgrades to the engines and transmissions can be applied to all the vehicles in the families as well as upgrades to armour and APS systems.
Isos

Screenshot from Krivoruchko's visit to the Military Industrial Company. It looks as though the K-16 Bumerang APC has more armor than before (Photo on the right is the K-17 IFV variant). Looks like it is at least partially designed to handle IEDs better.https://t.co/41yHrEQtCV pic.twitter.com/2KwDPVMV7O

My god it's beautiful. The extra armor was also to increase buoyancy btw.
Rasisuki Nebia

Wow that's an increase in armor package ... tests went on for a long time so seeing this and T-14 makes a lot more sense now, but yeah could just be optional stuff intended as an add-on ?
Isos

Btr-82A next to its replacement. It's like 2 times smaller. 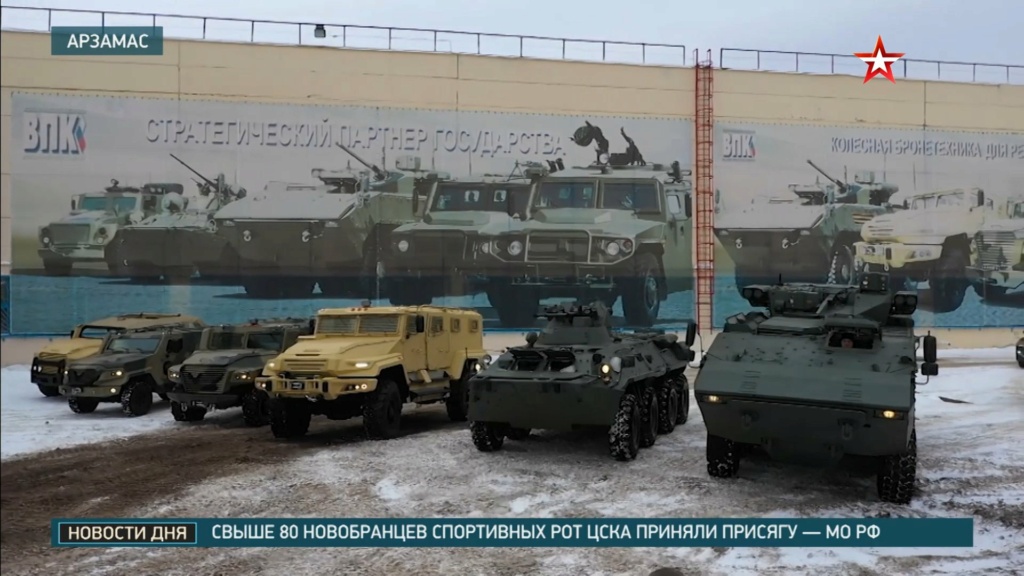 I would say they are new production vehicles that would all be used for different roles.

I would think on many front lines and in many situations the Boomerang will replace all versions of the BTR, but in some roles the BTR will remain in use where the Boomerang is too heavy, too big, or too expensive.

Note there was a recent photo of production Armatas that had thicker heavier armour fitted that stuck out further and looked to provide better protection compared with earlier models shown... which I suspect is just natural... tanks and planes and helicopters normally get heavier over their operational lifespans... which is why the Su-57 has a new more powerful engine and the engines of the Armata and Kurganets/Boomerang are modular and are expected to increase power and performance over time... they actually were designed with built in growth potential.
Sponsored content