This was announced on Tuesday by the commander-in-chief of the Navy, Admiral Vladimir Korolev, at a meeting on surface shipbuilding.

"Serial construction of mine defense ships is carried out within the framework of the development and re-equipment of mine-trawling forces of the Navy. Until 2030, the Russian Navy plans to have about 40 ships of the PMO project 12700," he said

Earlier, Vladimir Tryapichnikov, head of the shipbuilding department of the Russian Navy, said that the fleet expects to receive 40 fiberglass trawlers of the project 12700 by 2030–2050.

Minesweppers are very important in narrow and congested hostile seas surrounding Russia. Minefield cutting of BF and BSF mustn't be an option.
Hole

I guess they solved the last problems with the fiberglass hulls and can now accelerate their production.
ult

Hole wrote:I guess they solved the last problems with the fiberglass hulls and can now accelerate their production.

They say that they can produce 3 ships per year, and that full production cycle including trials is 2,5 years.

I guess they solved the last problems with the fiberglass hulls and can now accelerate their production.

What problems? The fire?

I thought the main issue is the question of the drone boat since the French one seems to be a bit iffy in capability, too big to be carried onboard & anyway in need of import substitution.

The 40 number has been floating around for a while.
GarryB

Well by 2025 they are probably going to have all the replacement Corvette sized ships they need, so there should be plenty of small shipyard building capacity by then.

Plus minesweepers have some serious electronics on board but in terms of vessels they are not super complex...

I don't see them being built elsewhere given it uses a huge mould & infusion gear.
Hole

With "problems" I meant the quality and speed of the work. You have to be very careful when forming the hull with that stuff (no bubbles and so on).
hoom 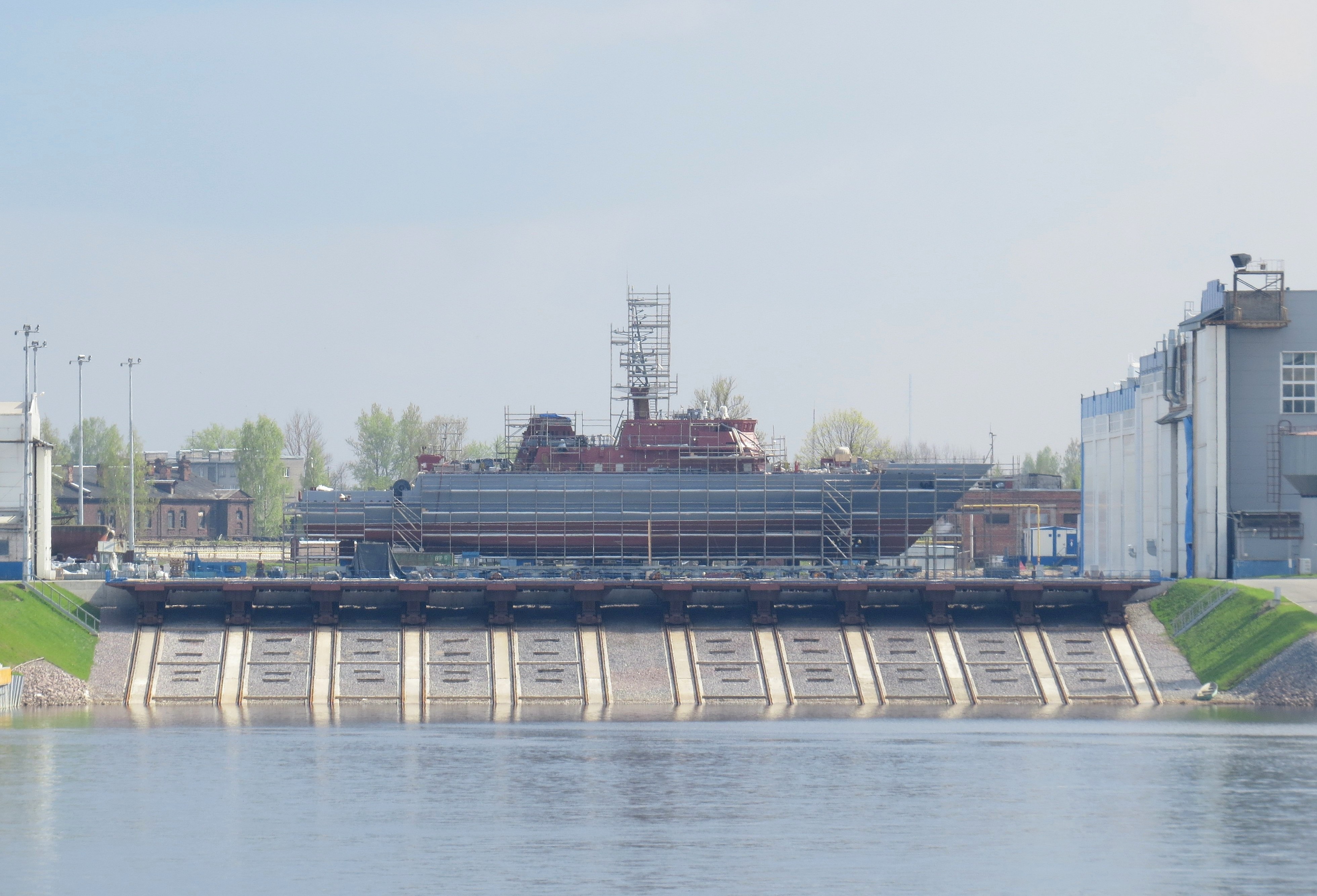 I don't see them being built elsewhere given it uses a huge mould & infusion gear.

Maybe they start making hulls that can be towed to other yards to be completed.
hoom

Or they could just complete them in-loca & sail/ship them complete to permanent base.
hoom

Aleksandrit-ISPUM anti-mine drone http://charly015.blogspot.com/2019/05/robot-de-desminado-para-los-dragaminas.html
Pics look like a show model rather than prototype or production 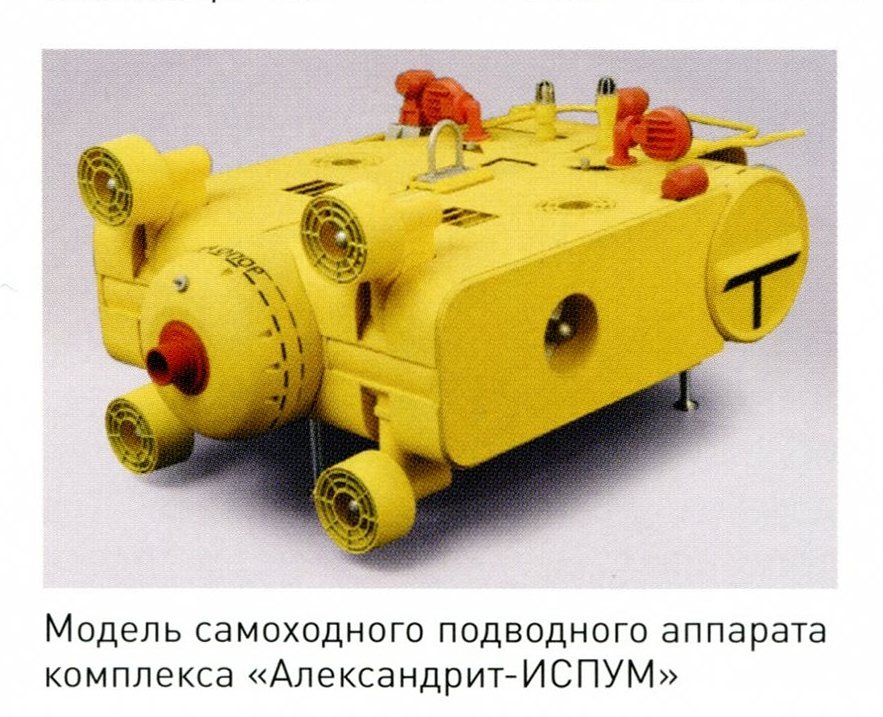 According to http://tass.com/defense/1057943 these are already on both 1st & 2nd, being delivered to 3rd with orders for 6 (unclear whether that includes the first 3 or in addition to them) and looking at adding to older mine-sweepers in refits.

Can't seem to find any info on what capabilities it has

Russia to float out latest minesweeper on May 30

The sea trawler "Vladimir Emelyanov" of the project 12700 was launched

May 30, 2019 in St. Petersburg at JSC "Sredne-Nevsky Shipbuilding Plant" (SNSP), part of the United Shipbuilding Corporation JSC - USK) the ceremony of launching the sea minesweeper "Vladimir Emelyanov" under construction for the Russian Navy took place ) Project 12700 (cipher "Alexandrite"), which became the third ship of this type. 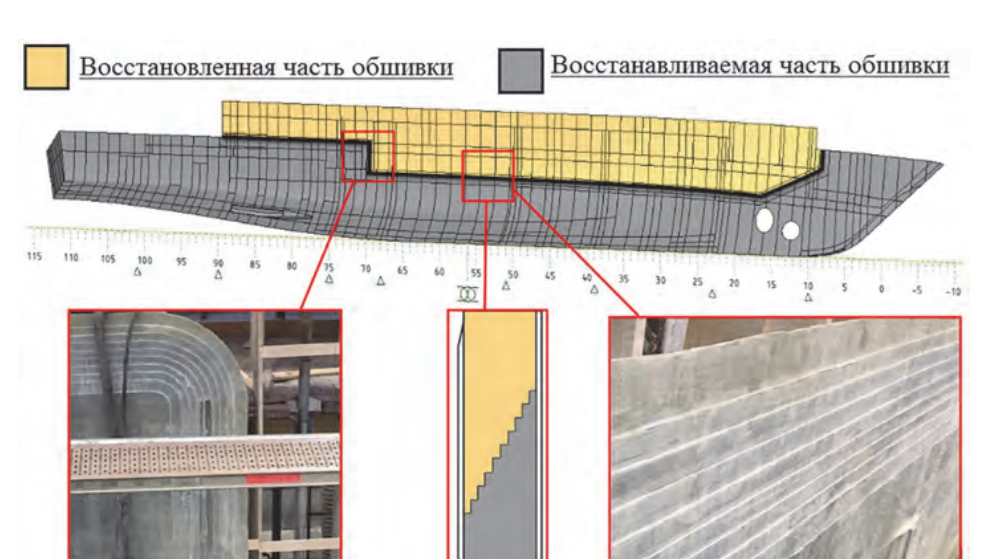 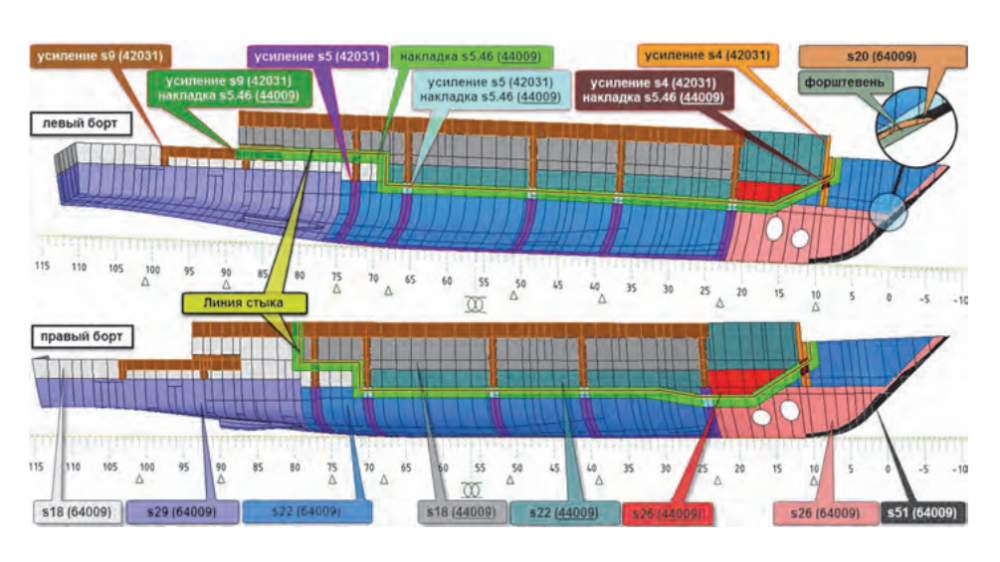 Or they could just complete them in-loca & sail/ship them complete to permanent base.

Isn't this that boat where the first one took 3-4 months to make but once they perfected the process it then took 3-4 days to make the hull?

If that is the case then they should be able to whack out 30 hulls in a couple of months fairly easily and sail them off to different yards to complete fairly easily... they could keep one or two to complete themselves but it should not be a big deal...
hoom

The minesweeper of the Baltic Fleet "Alexander Obukhov" discovered and defused 10 German naval mines in the Gulf of Finland, which had been laid there during World War II. As the military clarified, the ship was looking for ammunition with the help of the modern Alexandrite hydro-acoustic complex and the SeaScan underwater drone, the agency reports.TASS .

The press service of the Baltic Fleet explained that minesweepers are regularly engaged in demining those areas of the Gulf of Finland where the battles of World War II took place. 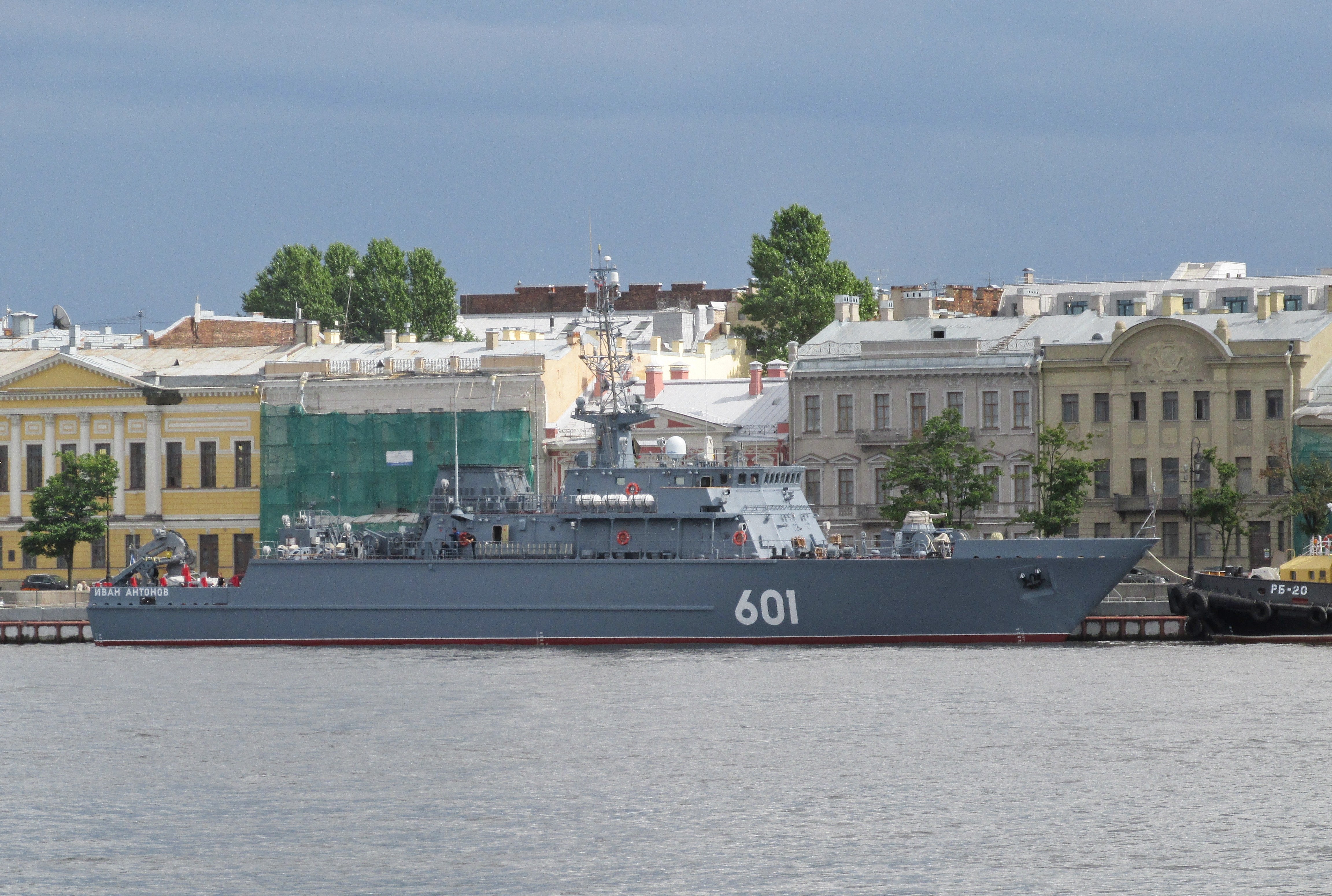 There would be all sorts of shit in those waters and the other waterways around Russia... after WWII with the end of lend lease the Soviets handed over to the US all the aircraft and equipment they didn't lose or want to keep... it was credited against their account so they didn't have to pay for stuff they didn't need, but the US ships carrying the stuff had a problem as it was all old obsolete crap they shifted to the Soviets because they didn't need it themselves, so when their ships reached international waters they just dumped all the stuff over the side into the water... planes and tanks and all sorts of stuff straight in to the sea...
Hole

And a lot of old chemical weapons from Germany in the Baltic Sea, sunk by the british after WWI. 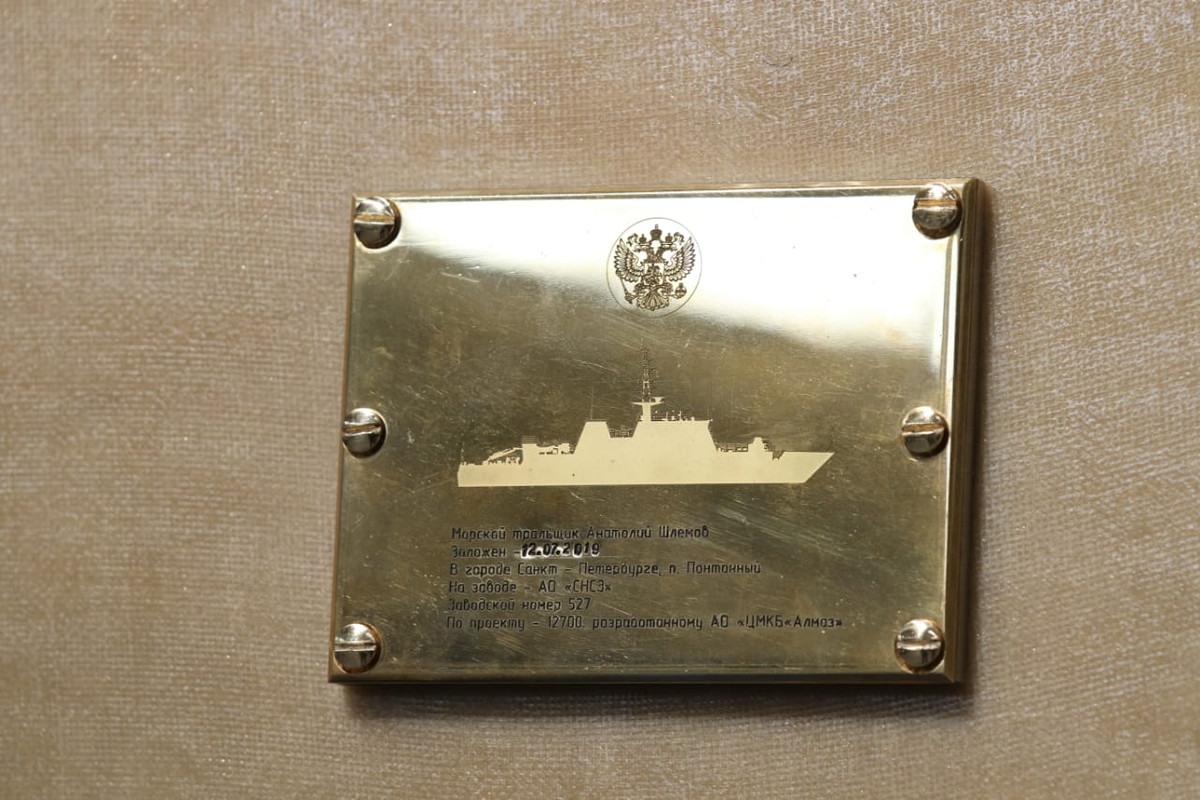 Mortgage board of the sea-sweeper “Anatoly Shlemov” (serial number 527) of project 12700, laid on 07/12/2019 for the Russian Navy at Sredne-Nevsky Shipbuilding Plant JSC (c) Krymchanin 333 / forums.airbase.ru

The solemn laying ceremony was held with the participation of the Deputy Prime Minister of the Russian Federation on the defense industry Yury Borisov, the head of shipbuilding, armament and weapons operation - Deputy Commander-in-Chief of the Navy for armaments Igor Mukhametshin, Acting Governor of St. Petersburg Alexander Beglov, President of the United Shipbuilding Corporation Alexey Rakhmanov, representatives of the Almaz Central Maritime Design Bureau, also "SNSZ" JSC employees and veterans.

The minesweeper Anatoly Shlemov became the seventh ship of the project 12700, and the third laid down at the SNSZ under an additional contract for three ships of the project 12700, concluded by the company with the Russian Ministry of Defense in March 2016. Delivery of the ship of the Navy under the terms of the contract is scheduled for November 2020. Earlier, on December 26, 2017, the minesweeper Yakov Balyaev (serial number 525) was laid first under the contract on SNSZ, and the minesweeper Petr Ilichyov (serial number 526) was laid down on July 25, 2018.

Officially, the ships of the project 12700 (designer - Almaz Central Marine Design Bureau) are now classified as naval trawlers in the Russian Navy, but in fact both the naval and the construction plant continue to call them naval or basic trawlers, and the SNSS prefers the neutral term " mine defense ship. "

Prior to that, the SNSZ, under a contract with the Ministry of Defense of Russia dated March 30, 2007, renegotiated on June 10, 2014, carried out the construction of the lead minesweeper of the project 12700 “Alexander Obukhov” (factory number 521). The minesweeper "Alexander Obukhov" was started by construction on SNSZ in 2007, officially laid on September 22, 2011, launched on June 27, 2014, and began factory sea trials on April 29, 2016. The transfer of “Alexander Obukhov” to the Russian Navy took place in Kronstadt on December 9, 2016. 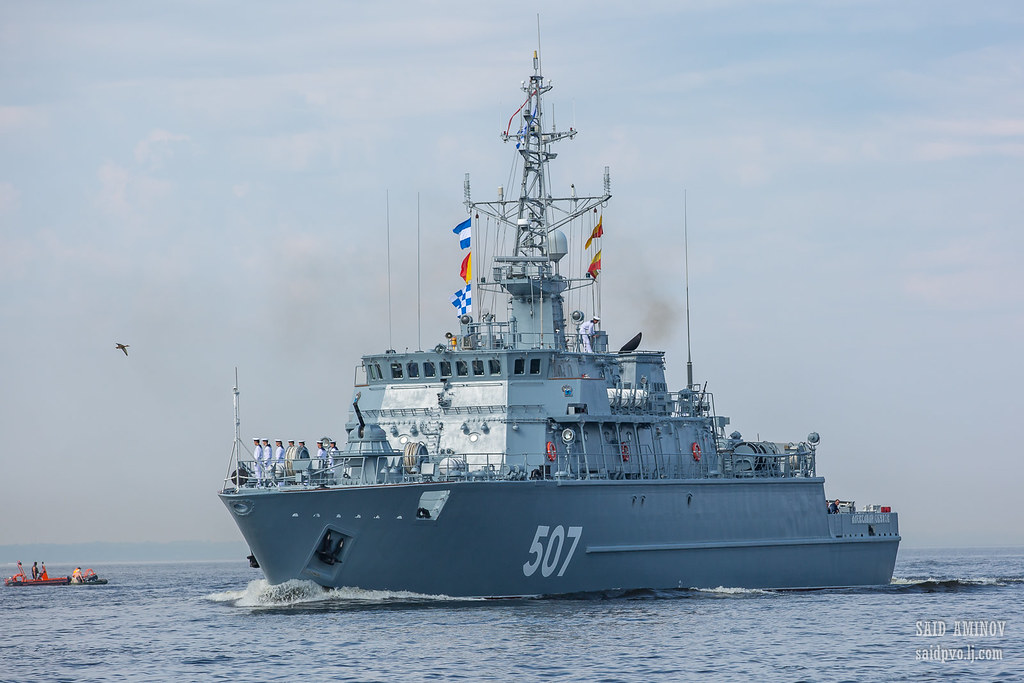 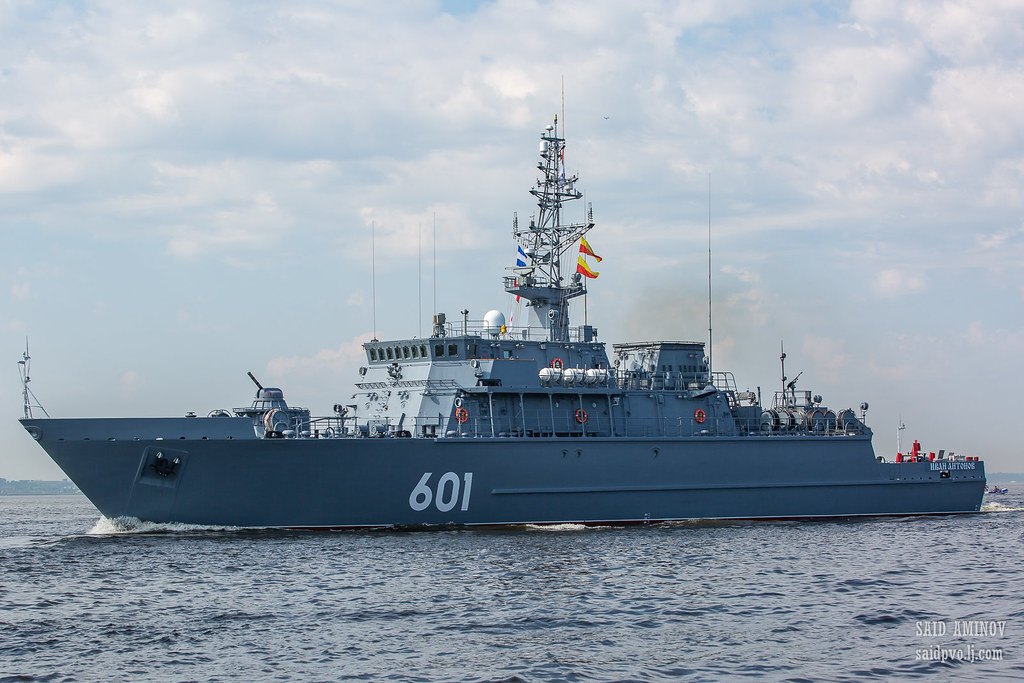 Ivan Antonov apparently left for BSF, seems to be via river/canal system.
hoom

hoom wrote:Ivan Antonov apparently left for BSF, seems to be via river/canal system. 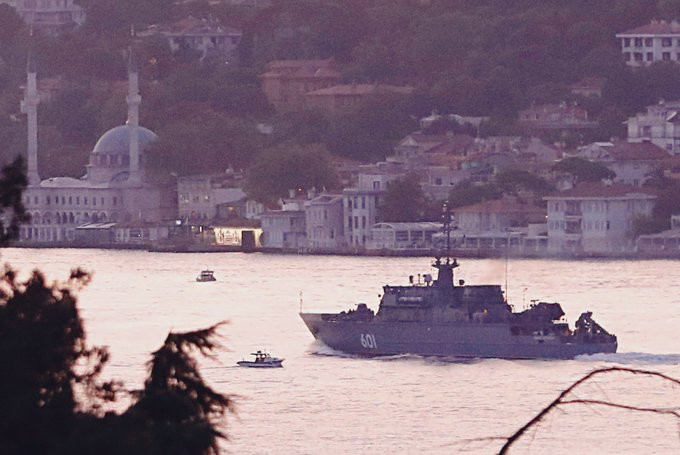 According to the press service of the Southern Military District, on September 7, 2019, the newest sea minesweeper Ivan Antonov of project 12700, for the first time after joining the Black Sea Fleet (Black Sea Fleet), arrived at a permanent deployment center in Sevastopol. The ceremonial ritual dedicated to the arrival of the ship was led by Rear Admiral Sergey Lipilin, Deputy Commander of the Black Sea Fleet.

The meeting of the new ship was attended by the command and veterans of the fleet, families and relatives of the crew members of the ship.

The commander of the vessel [sic!] “Ivan Antonov”, captain of the 3rd rank Sergey Pinyutin, informed the deputy fleet commander about the successful completion of the inter-naval transition and the fulfillment of tasks in the far sea zone.

Earlier, the minesweeper’s crew presented the latest Russian shipbuilding in the Main Naval Parade in honor of the celebration of the Navy’s day in St. Petersburg. 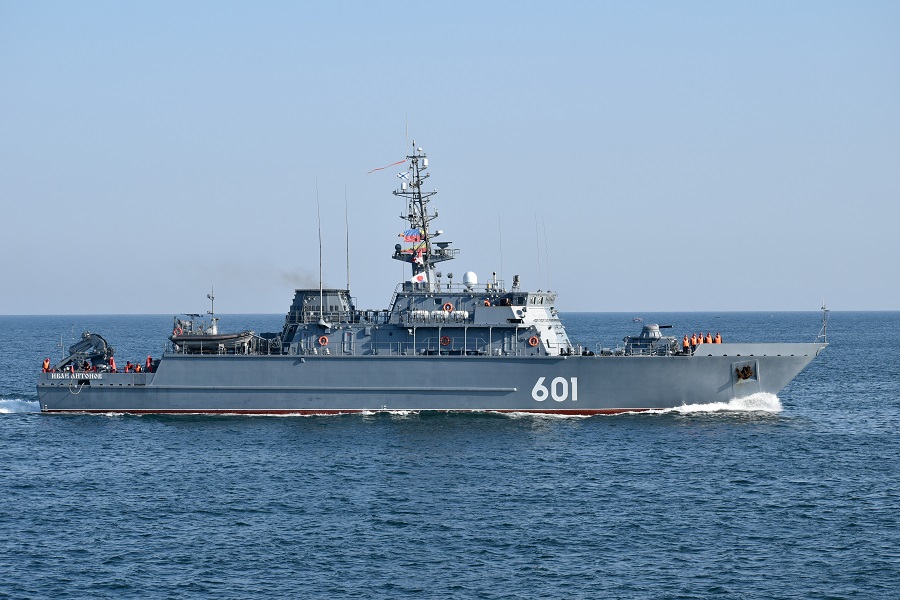 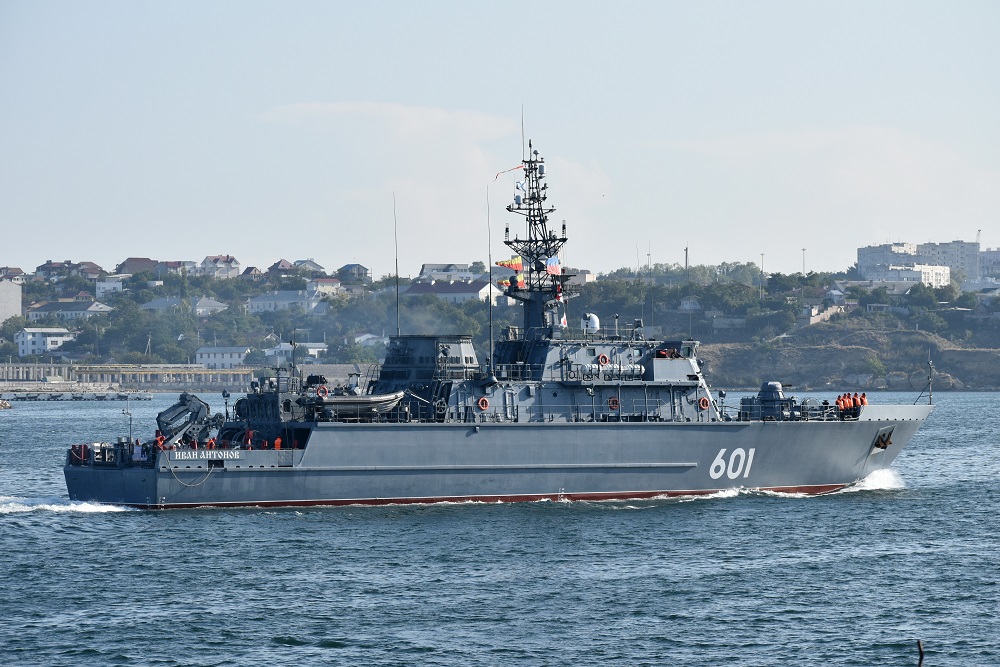 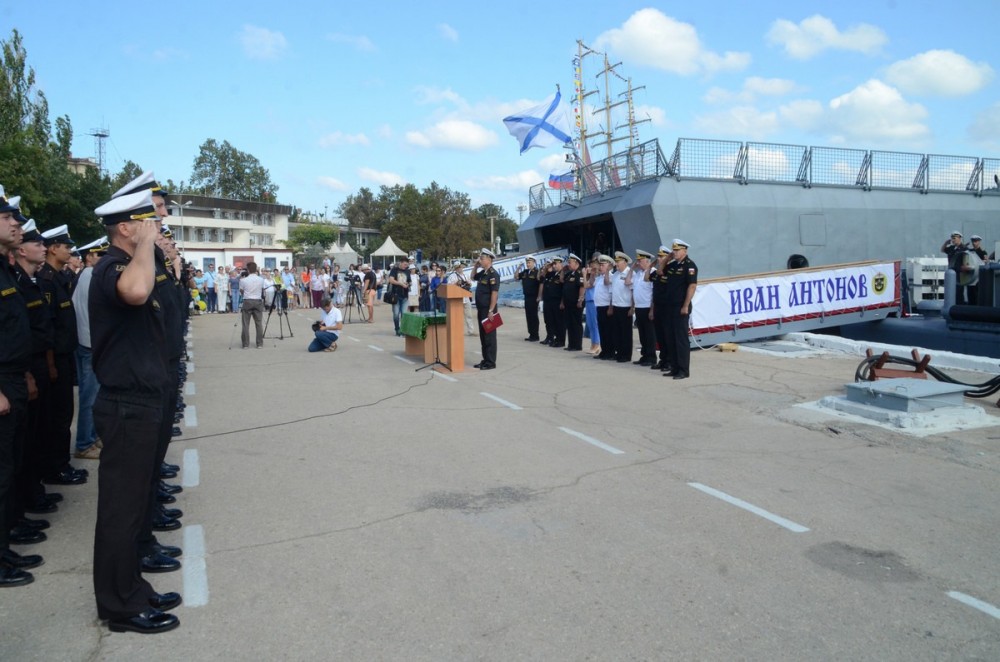 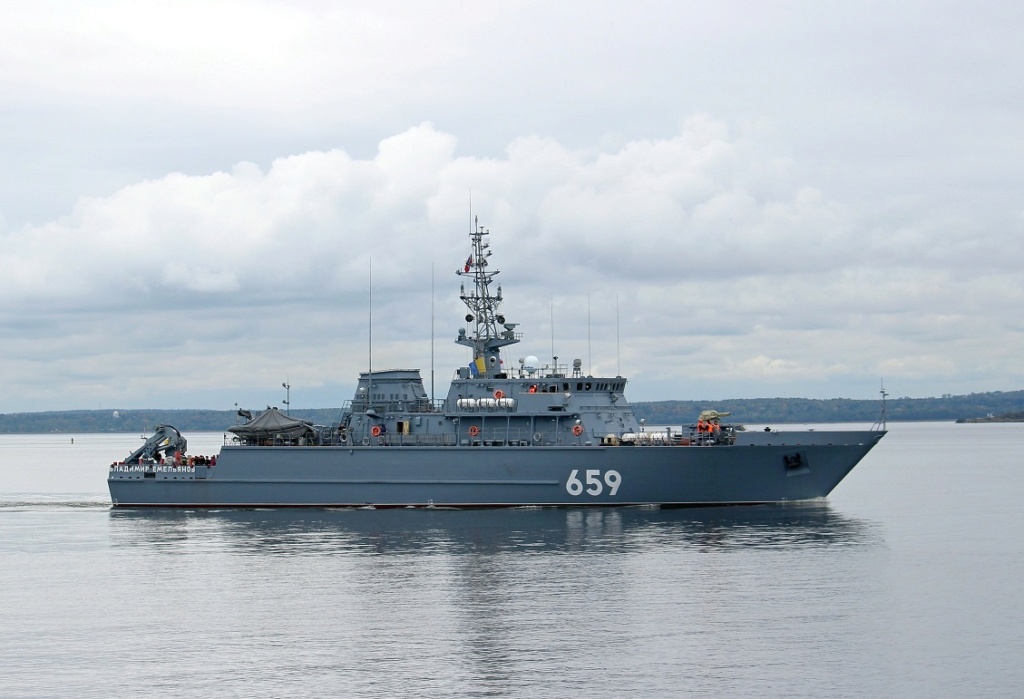