Indian Navy released an RFI (last month) for the outright purchase or lease of 3-5 Mine Countermeasure Vessels (MMCV).

Indian Navy is a former operator of the Natya class (Project 266M) known here in India as the Pondicherry-class minesweeper.

Russian Navy is also modernizing its mine warfare capabilities with the Alexandrite-class (project 12700) mine counter measure vessel. The second-hand MCM vessels that India seeks may therefore come from Russia.

Strange that only one ship so far has ended up in the Baltic Fleet.

On September 9, 2021 at Sredne-Nevsky Shipbuilding Plant JSC (SNSZ, part of United Shipbuilding Corporation JSC - USC) in St. Petersburg, a groundbreaking ceremony was held for the Russian Navy's Afanasy Ivannikov "project 12700 (code" Alexandrite ") with serial number 529. This is the ninth ship in the series of project 12700. 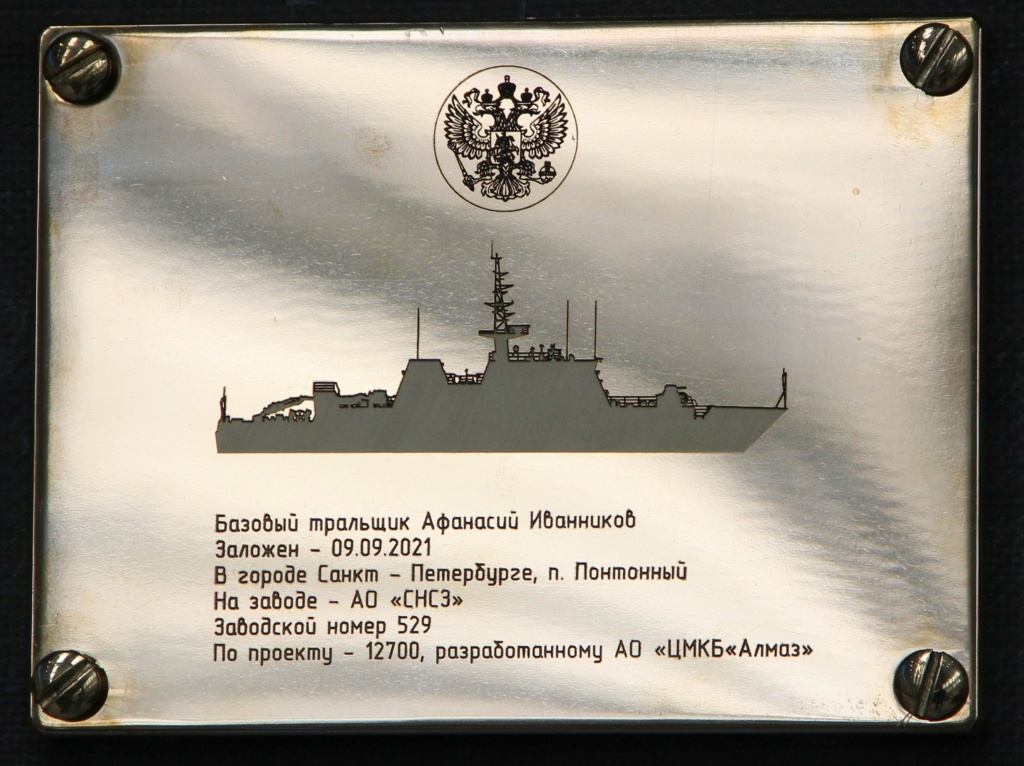 The Project 12700 (Alexandrite-class) seventh mine countermeasures ship Anatoly Shlemov slated for entering service with Russia’s Pacific Fleet in 2022 was floated out at the Sredne-Nevsky Shipyard in St. Petersburg on Friday, a TASS correspondent reported from the scene. 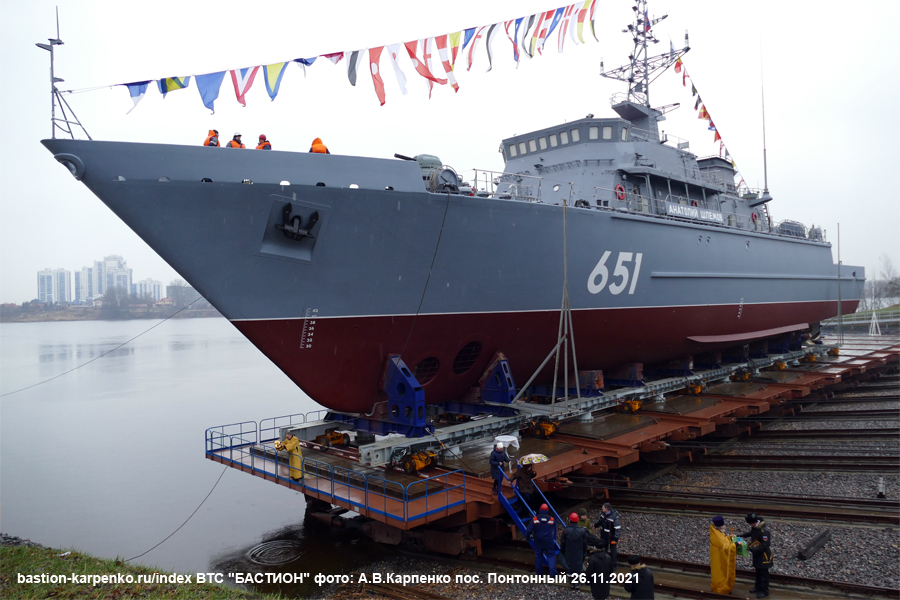 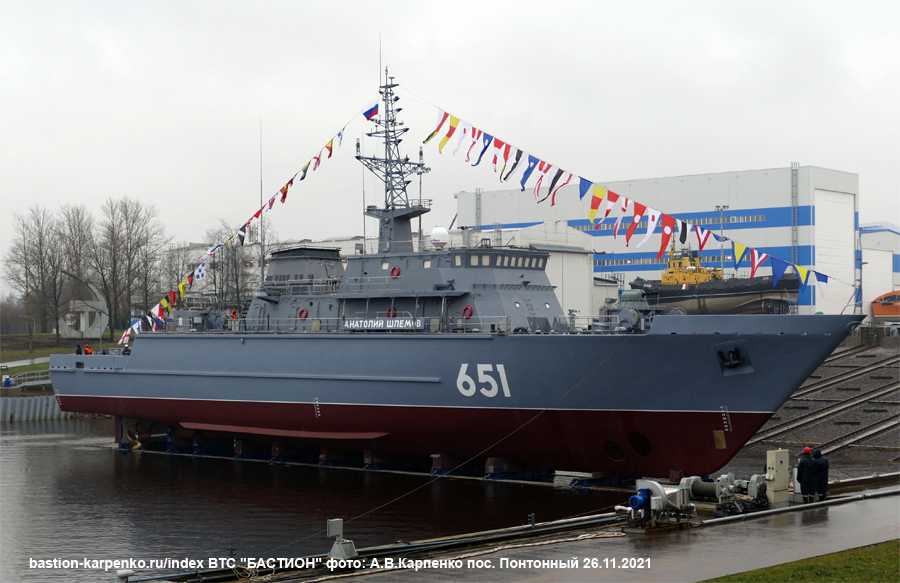 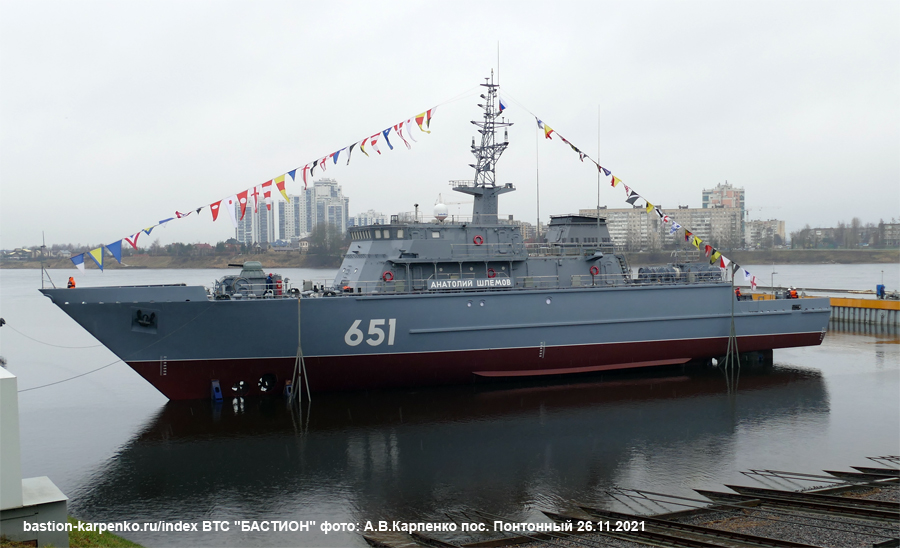 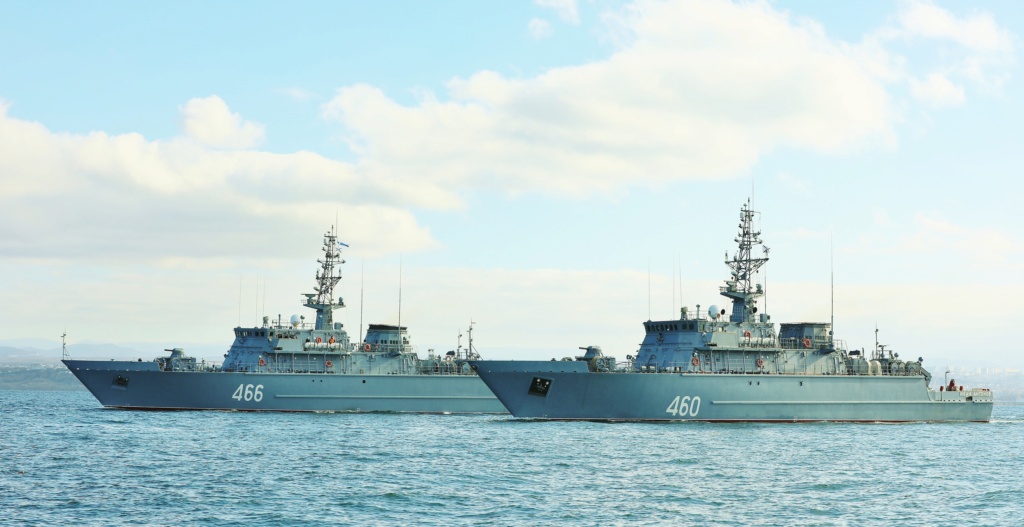 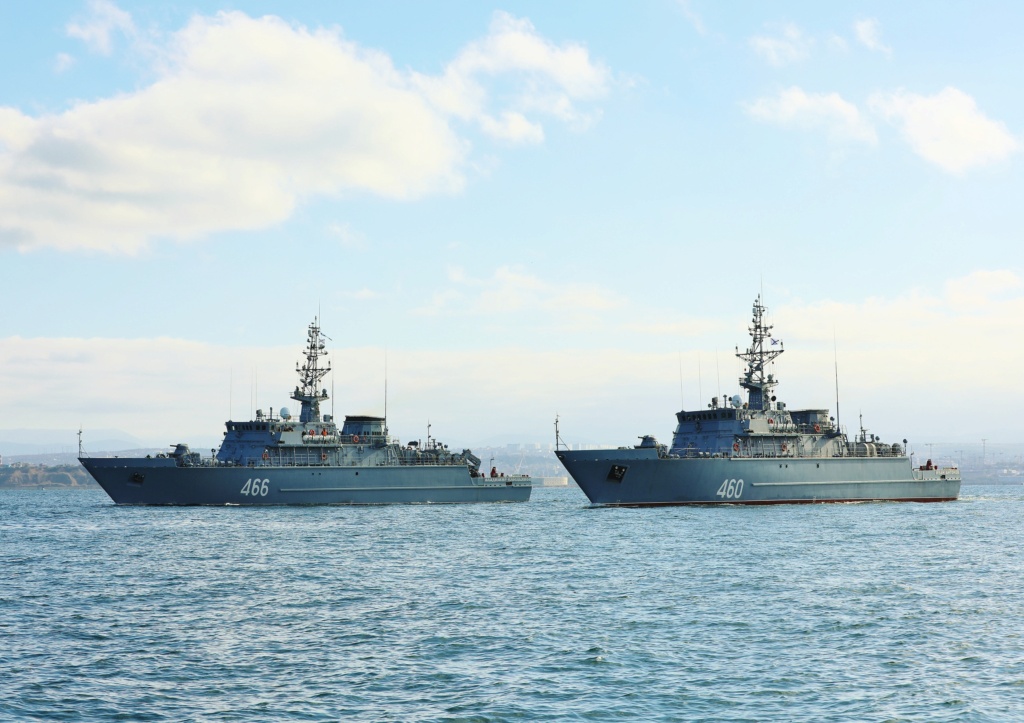 The Pyotr Ilichev is on sea trials. Soon to join the Navy (pacific Fleet). 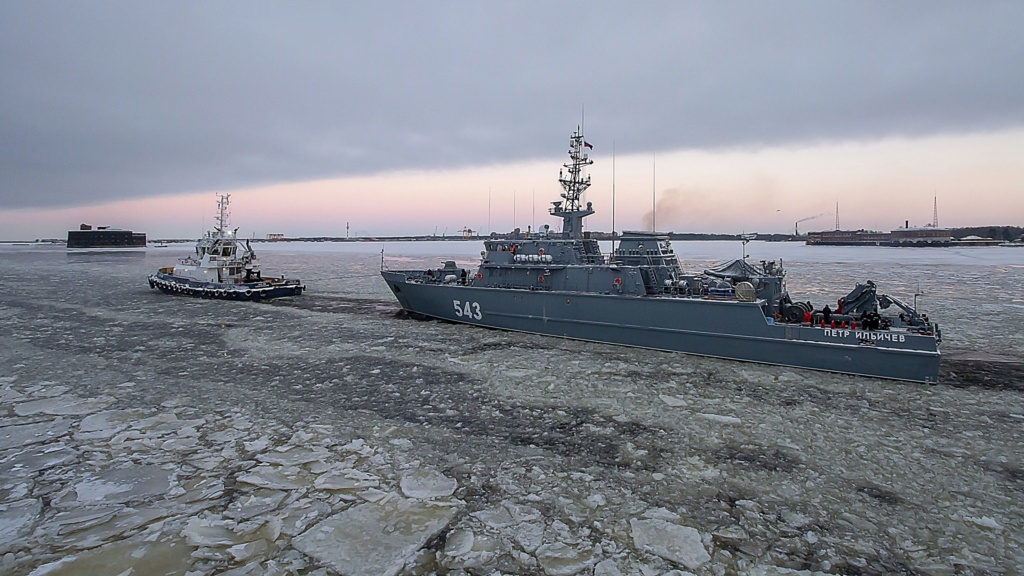 Order of the commander of the naval minesweeper "Vladimir Yemelyanov", dated November 14, 2019, No. 245

Despite the acute shortage of qualified personnel in the Navy of the Russian Federation, there are cases of unfair performance of their duties. So, as a result of simple but inept movements of Lieutenant Shapovalov Alexander Valeryevich, on November 14, 2019 at 6:30, Shapovalov's wife Eva Alexandrovna, instead of the future defender of the Motherland, gave birth to a girl, Evgenia - weighing 4 kilograms and 51 centimeters tall.
I order you to congratulate Lieutenant Shapovalov Alexander Valeryevich on the birth of his daughter for the unscrupulous unperformance of his duties in manning and strengthening the glorious Russian Fleet. To throw Lieutenant Shapovalov Alexander Valeryevich overboard in the Baltic Sea; to give out 100 grams of vodka. In the future, consider him a bungler until correction. The order should be brought to all personnel, executed immediately. 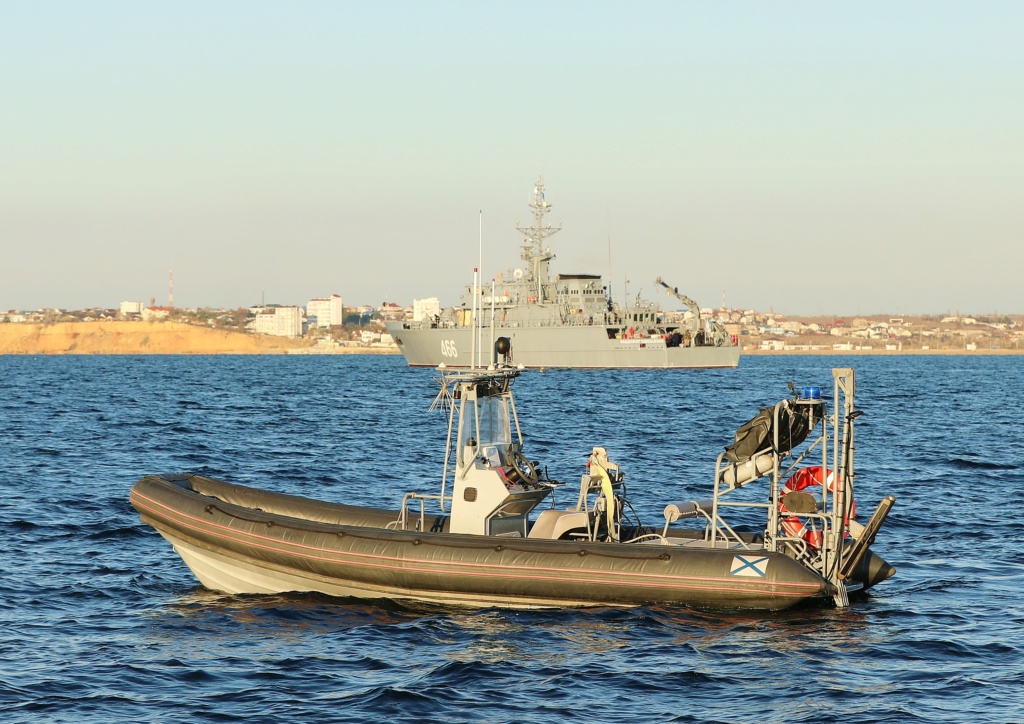 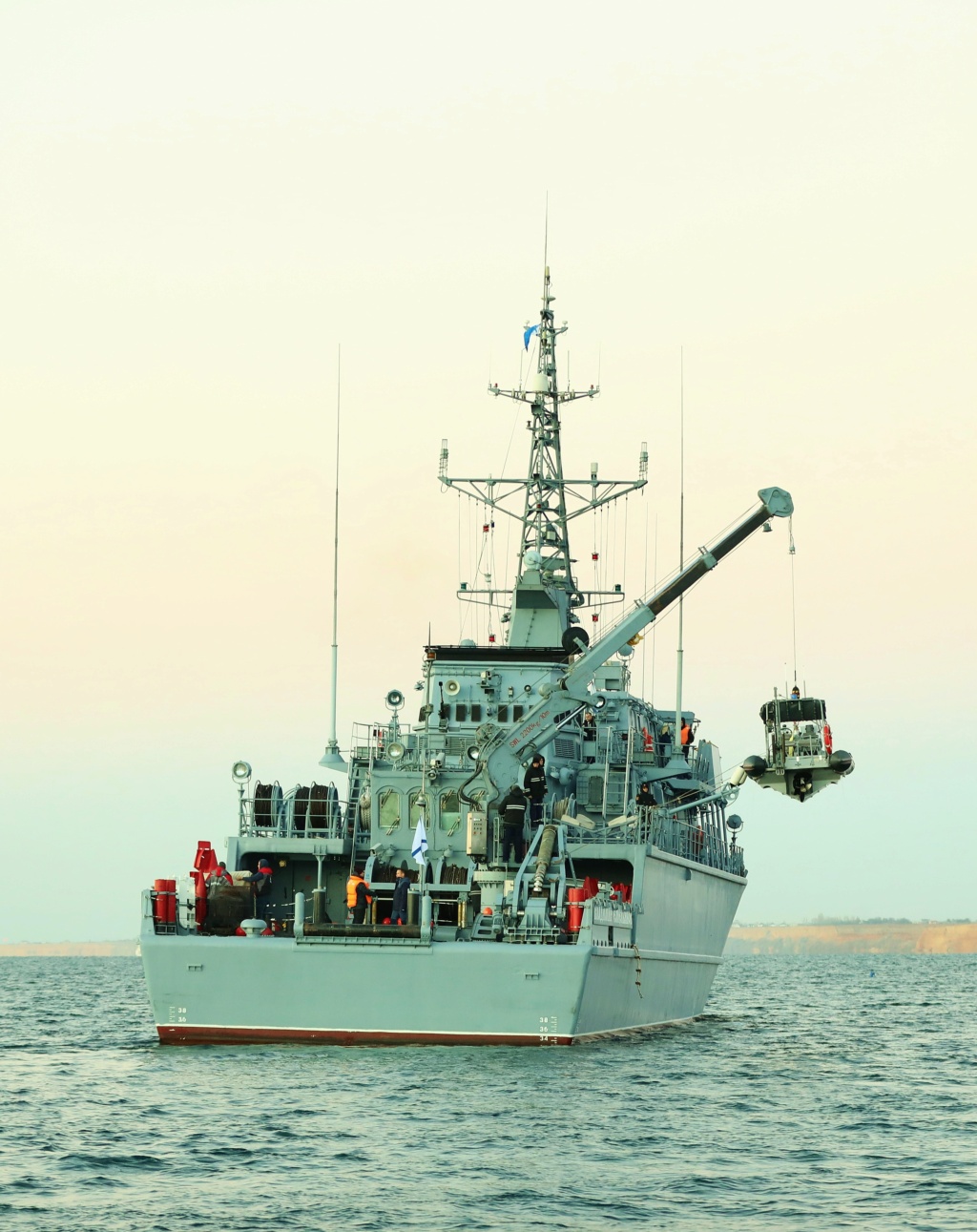 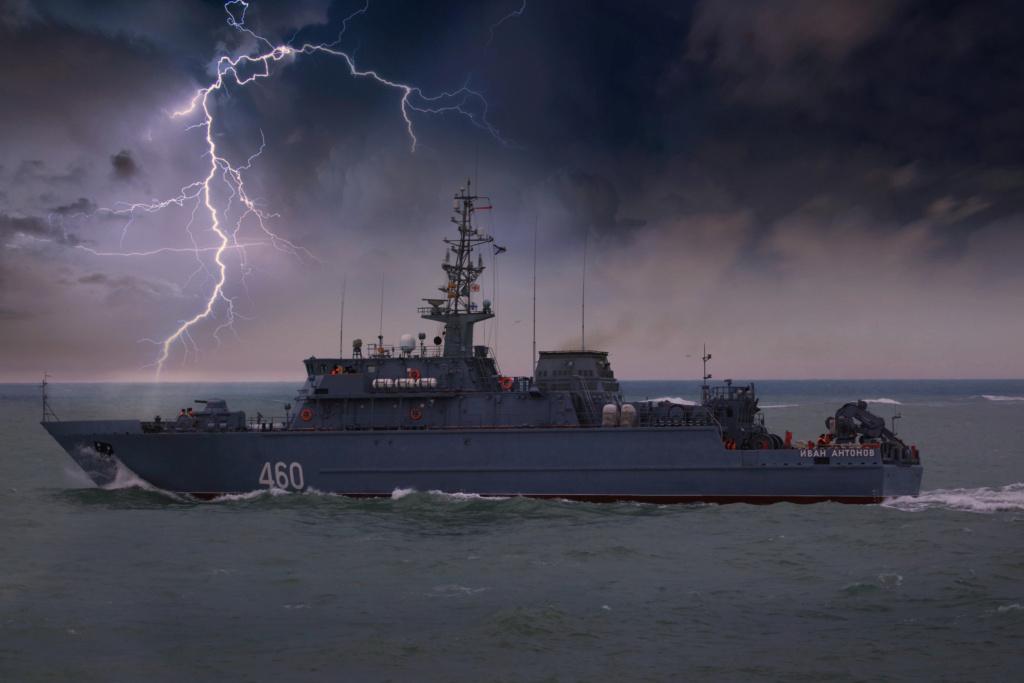 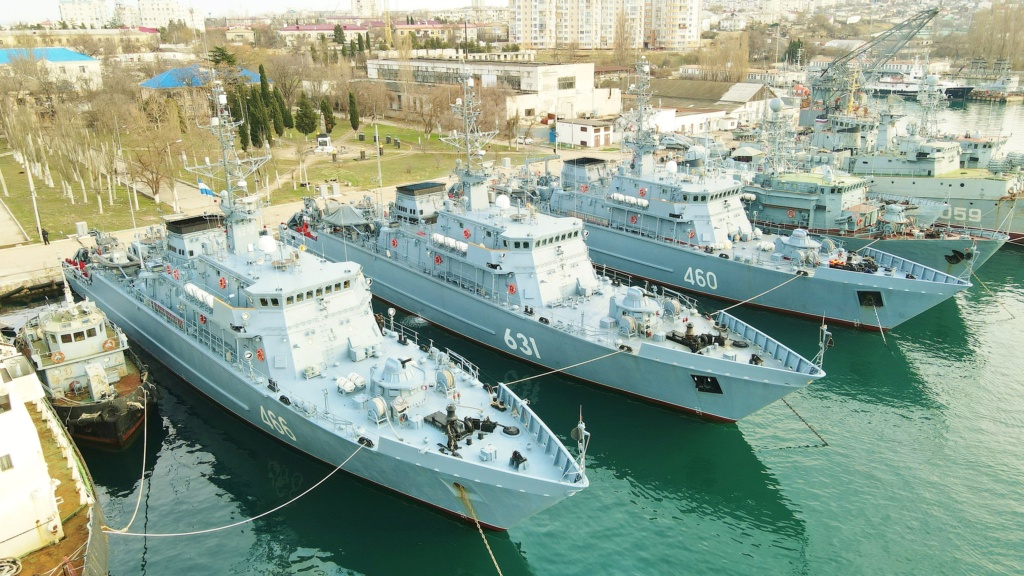 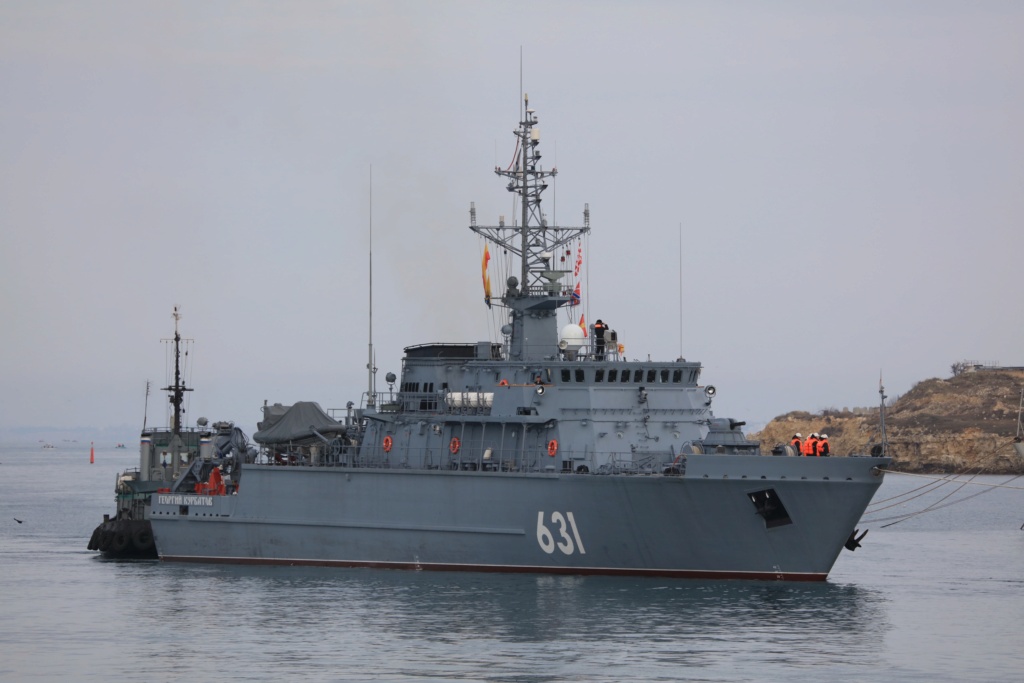 Interesting size comparison between the 12700 and the 266M. 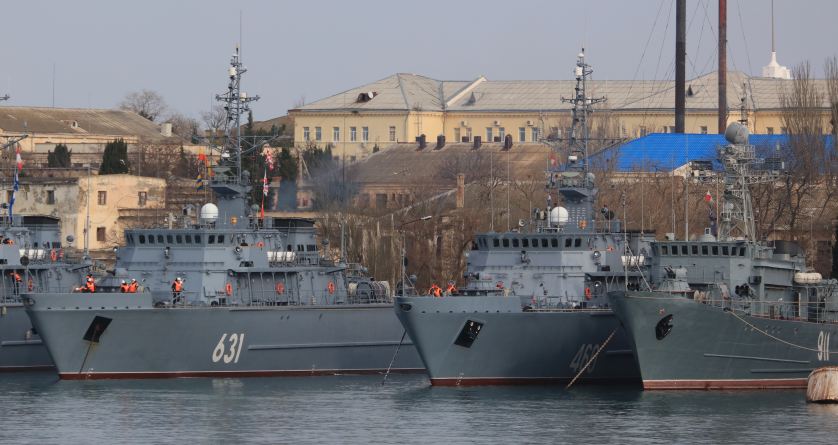 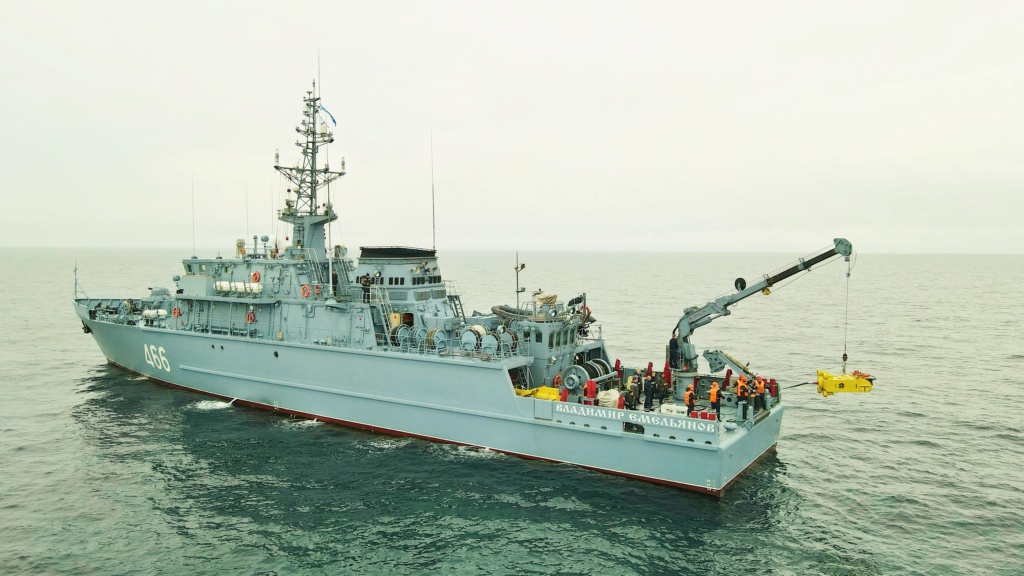 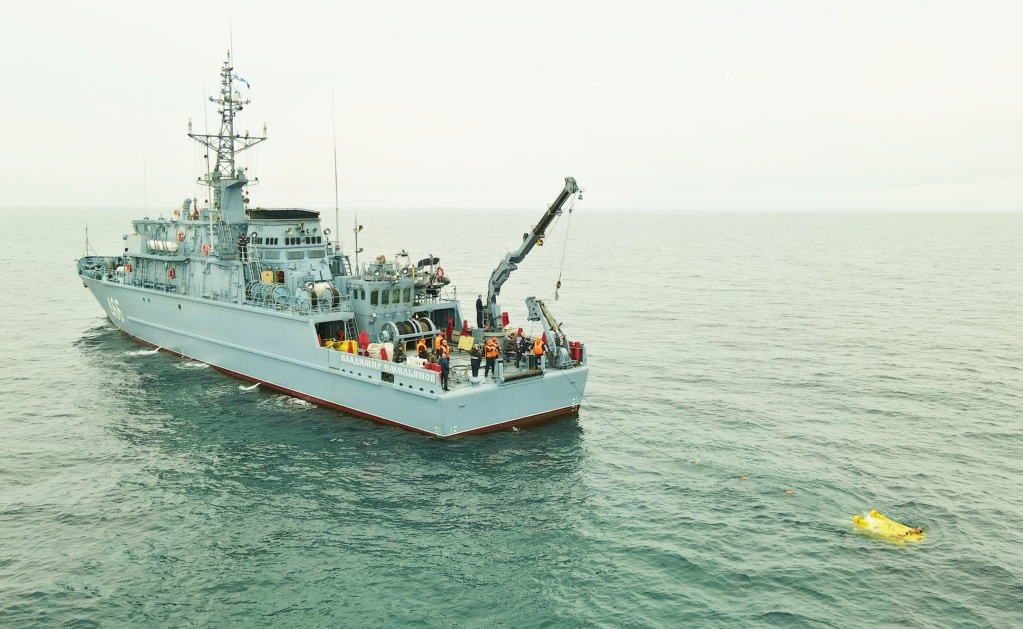 Minesweepers (and other ships) in Sevastopol 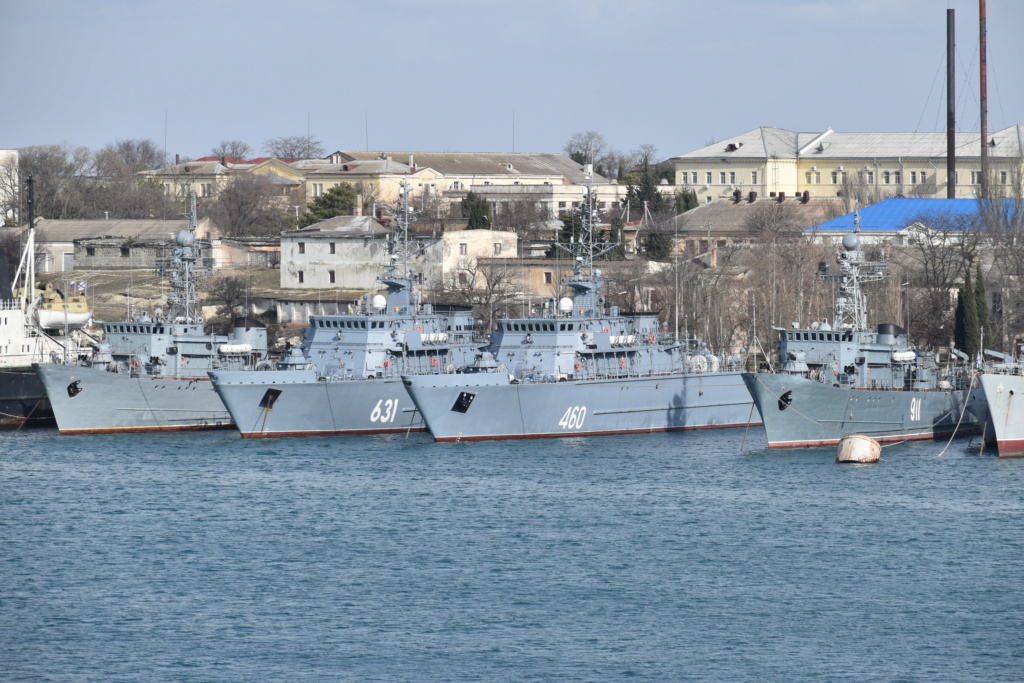 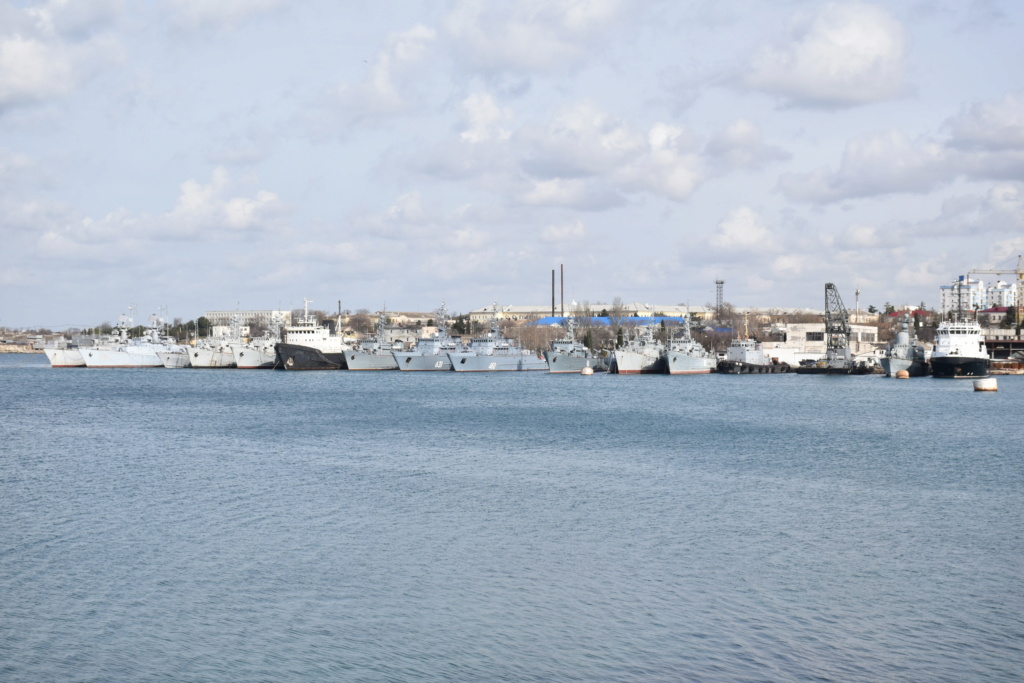 Interesting size comparison between the 12700 and the 266M.


Minesweepers (and other ships) in Sevastopol

Nice pics... interesting they are still using the AK-230 twin barrel 30mm cannon on those ships.

I would have thought an upgrade to a newer gun would have improved logistics and made supply and support easier because the old twin barrel AK-230 fires a different 30mm cartridge to the current guns used in the Navy and Air Force and Army. 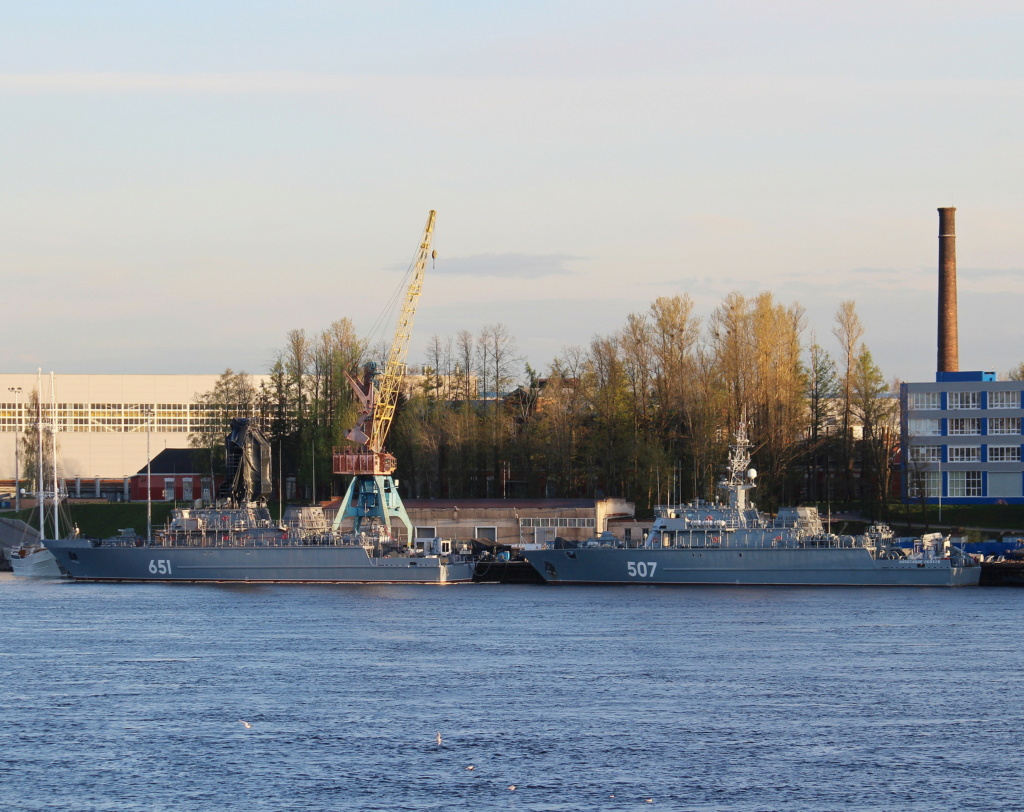 The minesweeper "Polyarny" project 12700 was laid down

On Russia Day, June 12, 2022, JSC Sredne-Nevsky Shipbuilding Plant ( SNSZ, part of JSC United Shipbuilding Corporation - USC) in St. ) "Polyarny" project 12700 (code "Alexandrite") with serial number 530. This is the tenth ship of project 12700 in the series. As the name implies, it is intended for the Northern Fleet. Vice Admiral Vladimir Kasatonov, Deputy Commander-in-Chief of the Russian Navy, attended the laying ceremony. 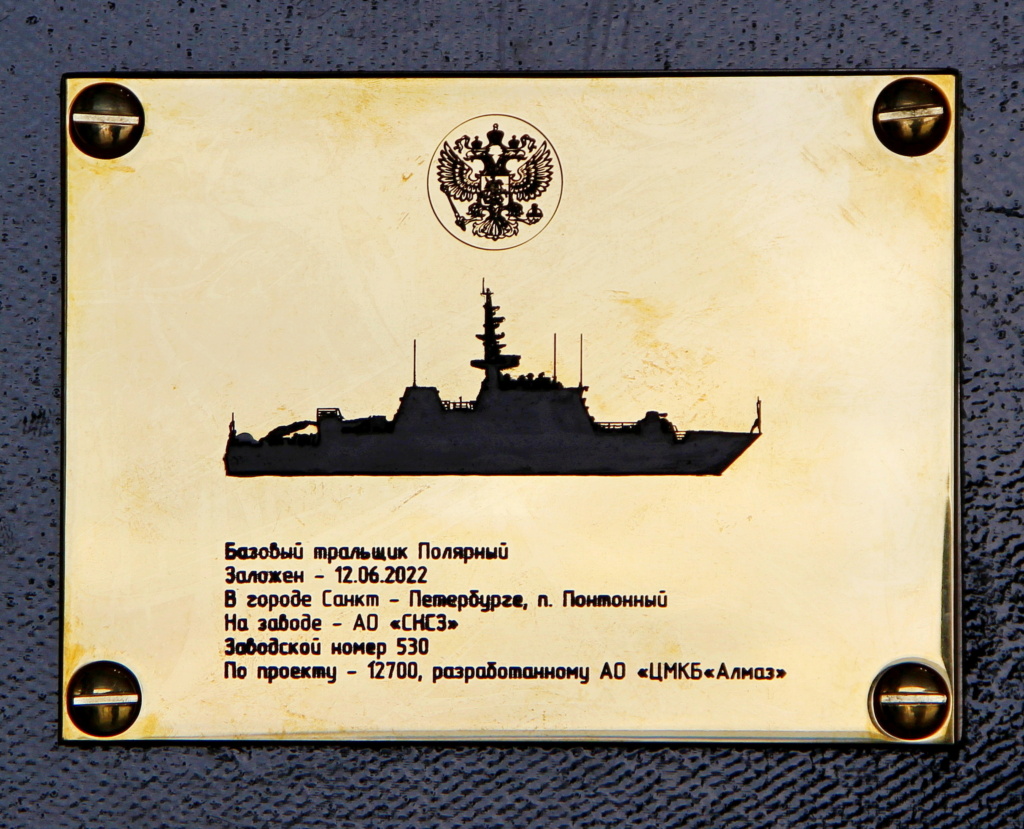 As reported by Sredne-Nevsky Shipbuilding Plant JSC (SNSZ, part of United Shipbuilding Corporation JSC - USC), on July 11, 2022, the Pyotr Ilyichev minesweeper built at this enterprise (serial number 526) of project 12700 (code "Alexandrite" ) began to move in tow from St. Petersburg to the place of basing on the Pacific Fleet - in Petropavlovsk-Kamchatsky. The passage to the base will pass through the Northern Sea Route and will be completed in the second half of September. After that, the control exit of the ship to the sea, the signing of transfer documents, as well as the enrollment of the ship in the Navy of the Russian Federation will be carried out. 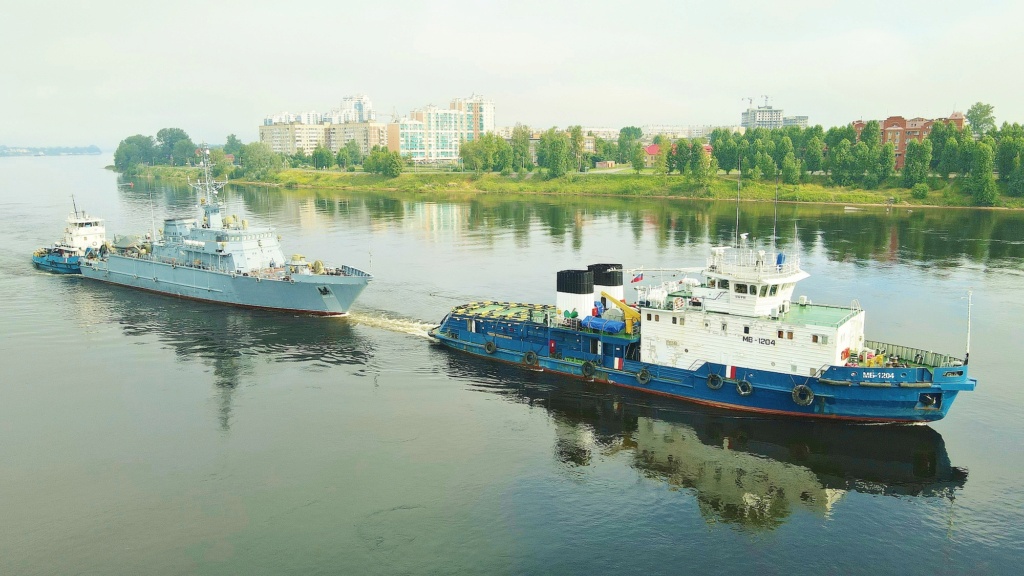 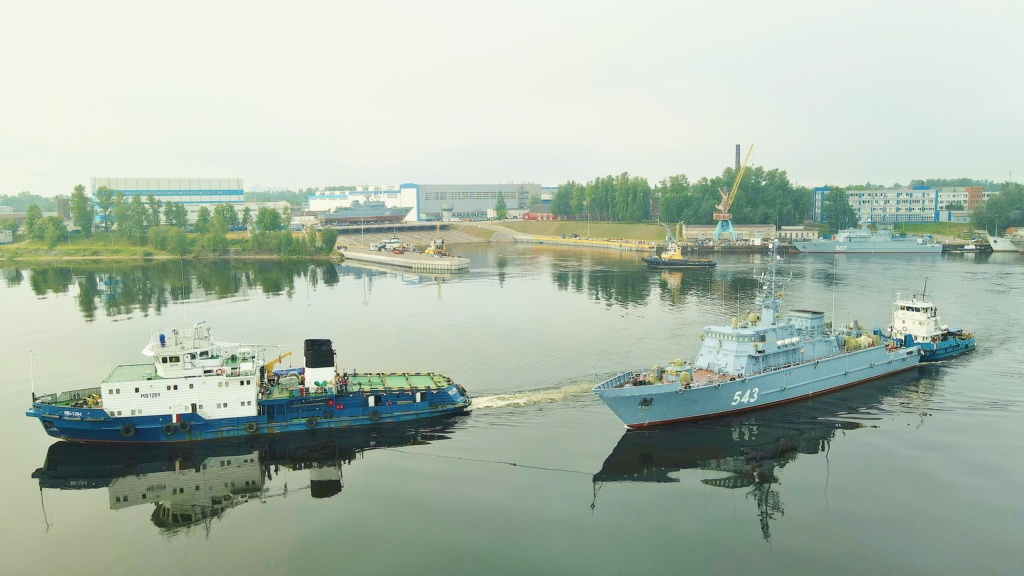 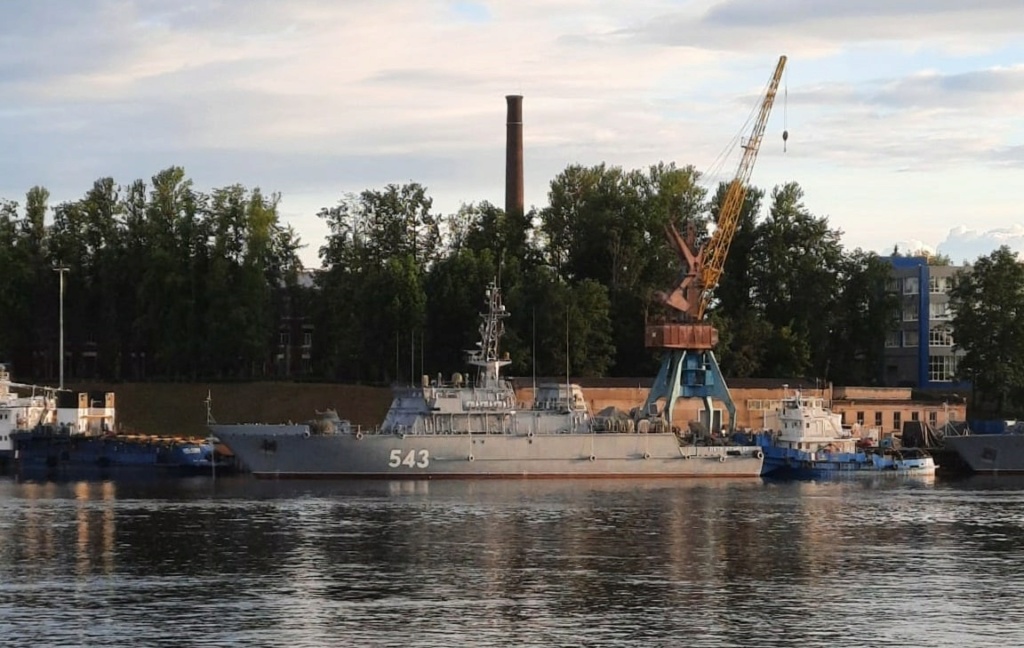 The minesweeper "Anatoly Shlemov" was also sent to the Pacific Ocean 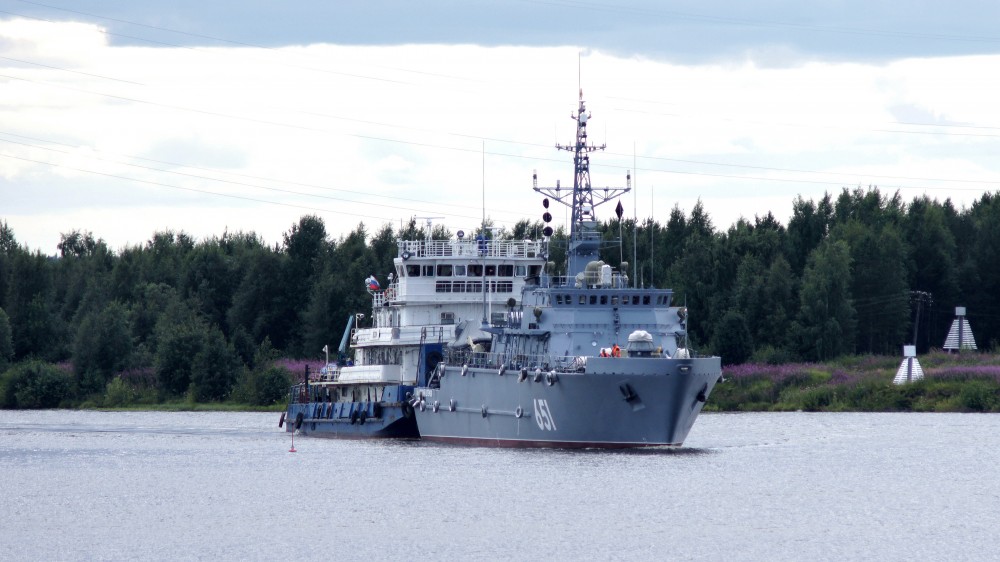 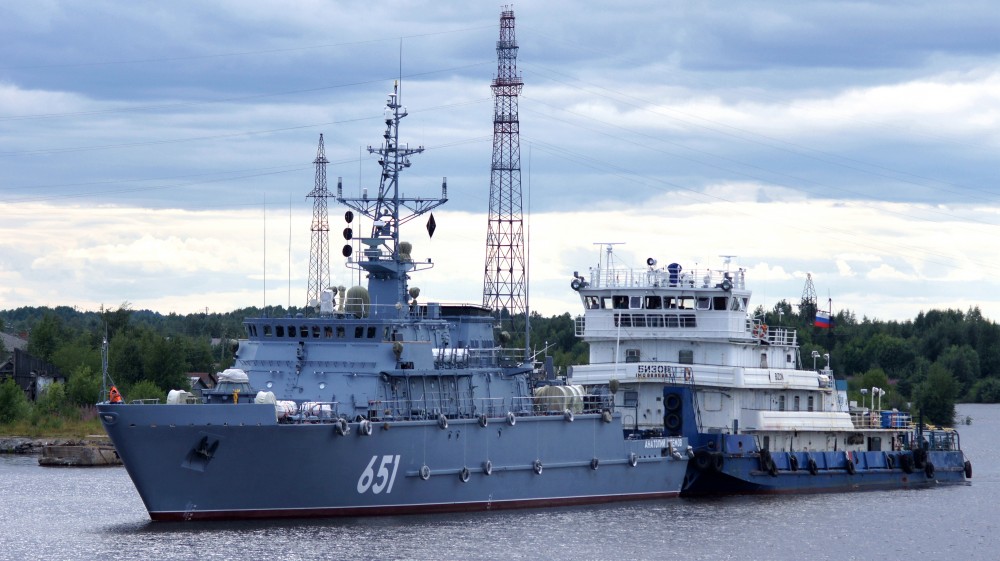 Earlier, the minesweeper Yakov Balyaev (serial number 525), built at the SNSZ, was transferred to the Pacific Fleet in a similar way.

At the laying ceremony of the Yakov Balyaev

minesweeper on December 26, 2017, the then deputy head of the Shipbuilding Department of the Russian Navy, Captain 1st Rank Mikhail Krasnopeev, said that the Russian Navy expects until 2027 [that is, according to the State Armaments Program for 2018-2027 ] get 10 Project 12700 ships.

A severe winter has arrived in the northern parts of Russia, the Chukotka region. The picture shows "Pyotr Ilyichev" (543) taken from the minesweeper of the same project "Anatoly Shlemov" (651). 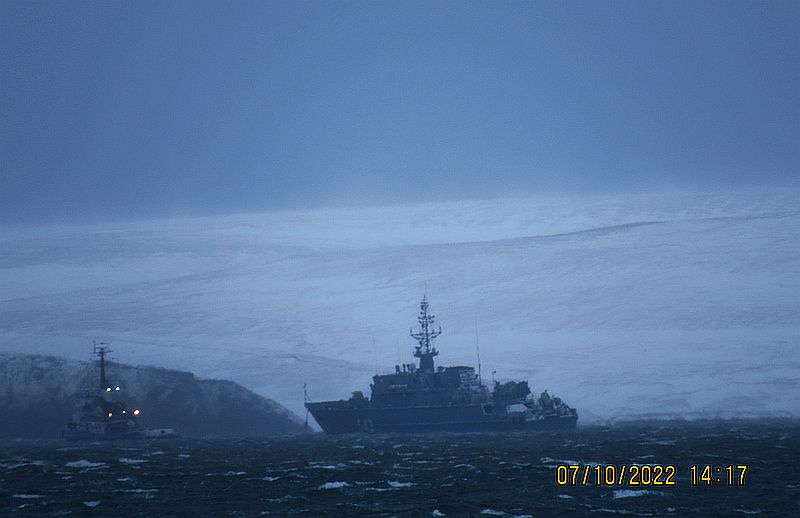 MOSCOW, 17 November. /TASS/. Project 12700 mine defense ship (code "Alexandrite") "Pyotr Ilyichev" is included in the combat structure of the Pacific Fleet (Pacific Fleet) of Russia. This was reported to journalists in the Ministry of Defense of the Russian Federation.

"In Kamchatka, the ceremony of raising the St. Andrew's flag took place on the modern sea minesweeper of Project 12700 Pyotr Ilyichev. By order of the Commander-in-Chief of the Navy, Admiral Nikolai Evmenov, the ship was included in the combat strength of the Pacific Fleet," the department informed.

During the ceremony held on this occasion, the commander of the troops and forces in the north-east of Russia, Vice Admiral Alexander Yuldashev, stressed that with the arrival of a new sea minesweeper, the mine defense capabilities of the association will increase significantly.

The design of the ship was created at the Almaz Central Marine Design Bureau. The sixth minesweeper in the series was built at the Sredne-Nevsky Shipyard. The ship passed along the Northern Sea Route from St. Petersburg to Petropavlovsk-Kamchatsky, where it completed state trials. The latest third-rank anti-mine ship is designed to deal with all types of modern sea mines. It has a molded body made of composite materials. It is equipped with modern hydroacoustic stations and an automated mine action control system.

A single-type sea minesweeper, Yakov Balyaev, is serving in Kamchatka, which entered the Pacific Fleet in December 2020. "Pyotr Ilyichev" is named after the Hero of the Soviet Union, Red Navy sailor Pyotr Ivanovich Ilyichev, who closed the machine gun embrasure with his body during the liberation of Shumshu Island from Japanese militarists.

The head of the region Vladimir Solodov took part in the flag-raising ceremony in Kamchatka. "Together with the commander of the military and forces in the north-east of the Russian Federation, Vice Admiral Alexander Yuldashev, they took part in hoisting the naval flag on the minesweeper Pyotr Ilyichev.
The minesweeper joined the ranks of the Navy. This is a modern mine defense ship that allows you to perform combat missions at the highest level and reliably protect the eastern borders of our country," the governor wrote on his Telegram channel.