This was announced on Tuesday by the commander-in-chief of the Navy, Admiral Vladimir Korolev, at a meeting on surface shipbuilding.

"Serial construction of mine defense ships is carried out within the framework of the development and re-equipment of mine-trawling forces of the Navy. Until 2030, the Russian Navy plans to have about 40 ships of the PMO project 12700," he said

Earlier, Vladimir Tryapichnikov, head of the shipbuilding department of the Russian Navy, said that the fleet expects to receive 40 fiberglass trawlers of the project 12700 by 2030–2050.

They'll have more minesweepers than surface combat vessels at this rate. For the benefit of whom will they be cutting a path through the minefield for, it must be asked.

And what then? Have the minesweepers do the fighting with their AK-630 gattling guns? Or more likely they'll just be sitting ducks because the rest of this mighty future Russian Navy doesn't exist.
GarryB

Come on FP, you are complaining that they are making important vessels that most other navies neglect... it is like saying why is the air force buying trainers and transports when they should be buying lots and lots of fighters.

Considering the closed seas the black sea fleet and the baltic fleet operate and to an extent all of their fleets really, and the number of choke points nearby and around them, I would think mine sweepers would be an even higher priority than a multi billion dollar carrier.

Not like they are hard to make and they would certainly be needed in any realistic scenario to protect surface vessels.

Obviously with modern high tech ships that are multi purpose it would be interesting to see if they have expanded the design to perhaps allow anti sub roles, as well as anti mine capabilities.

Sure it only has mines and 30mm gatlings, but even if it is operating with Corvettes, a corvette with a UKSK launcher can fire off 91er1 ballistic rockets to deliver a modern and capable anti sub torpedo out to 40km in a minute or so.
flamming_python

Some good import-substitution going on here

As for him, the French unmanned boats Inspector Mk II do not meet the needs of the Russian naval mariners in full. In May, Shlyakhtenko announced that beginning from the ninth ship, Project 12700 minesweepers would get "numerous changes and absolutely new features". This includes the new drone boats, too.

An interim solution was installation of the Russian unmanned boats Scanda. On July 10, Admiral Nikolay Evmenov, Russian Navy’s Commander-in-Chief said the Scanda’s key feature was that the robotized system was based on the massive operation experience of the fast-speed boats BL-680.

Development of unmanned motorboats for minesweepers and other Russian Navy’s ships is currently going on a competitive basis, two industry insiders told Mil.Press Today. The tactical specifications of the drone boats are jointly elaborated by the naval personnel, scientists, designers and representatives of industry.

One of the interviewees emphasized that the new unmanned boats would be mounted for test operation even on the fourth or fifth Alexandrite-class sweepers. The expert did not specify what exactly drone boat was in question, though said it was created on a new platform.

Project 12700 Alexandrite-class mine countermeasure ships must be equipped with home-produced low-magnetic deck cranes, concluded representatives of the Russian Navy and military industry convened at the United Shipbuilding Corporation’s meeting in the 2018 yearend, the two informed insiders told Mil.Press Today.

The meeting was attended by the naval officials, delegates from Almaz design bureau, Sredne-Nevsky shipyard, United Shipbuilding Corporation, and potential crane manufacturers. According to one of Almaz designers in charge for minesweeper projects, there was a fundamental decision as of switching to the Russian deck equipment. Further, the question will be related to the industry, he summarized. Along with that, the import substitution terms still remain cloudy.

The first two ships in series were equipped with foreign-made cranes. In the latter case, the matter is the low-magnetic (titanium) version of HTFC-2.2T10M-A-LM hydraulic telescopic-boom crane.

Among other missions, the device is designed for lifting of an unmanned distant-controlled boat. According to the specifications, the crane’s capacity is at least 2.2 tons, max handling radius from the stand axis is 9 meters. Materials of the crane’s components should be made of low-magnetic alloys like aluminum or titanic ones.

On April 17, 2018, the yard tied a contract with the Singapore company named Titan Offshore Equipment Pte Ltd for supervision and adjustment works and participation in mooring trials and revision stage of HTFC-2.2T10M-A-LM cranes. Cost of works is 126,300 SGD, which is about 6 mln rubles.

An informed insider told Mil.Press Today that Sredne-Nevsky shipyard had been tasked to prepare information about delivery terms and purchase procedures for other three minesweepers.

The minesweeper Vladimir Yemelyanov built at the Sredne-Nevsky Shipyard in St. Petersburg is the Project 12700 third warship

"Under the program of trials, the ship’s crew and the shipyard’s delivery team will check the operation of all the systems and mechanisms and test the radio-technical armament and the onboard sonar system," the spokesman informed.
Read also
Russia to float out latest minesweeper on May 30

Russia’s Defense Ministry reported in October that the minesweeper Vladimir Yemelyanov had arrived in Baltiysk for the final stage of its trials. The minesweeper was expected to fulfil the program of state trials in November. The shipbuilders are set to deliver the warship to the Navy by late 2019.

The minesweeper Vladimir Yemelyanov built at the Sredne-Nevsky Shipyard in St. Petersburg is the Project 12700 third warship. In 2016, the Shipyard delivered the Project’s lead ship Alexander Obukhov to the Navy and in January 2019 the St. Andrew’s Russian naval flag was hoisted aboard the minesweeper Ivan Antonov.

Project 12700 Alexandrit-class coastal-type minesweepers are referred to the new generation of minesweeping forces and are designated to fight sea mines, which they can encounter in the sea and at the seabed without entering the dangerous zone. The minesweepers can employ various sweeps, as well as remotely controlled and autonomous underwater drones. The minesweepers of this Project displace 890 tonnes, are 62 meters long and ten meters wide and have a crew of 44 men.

Vladimir Yemelyanov has been commissioned. 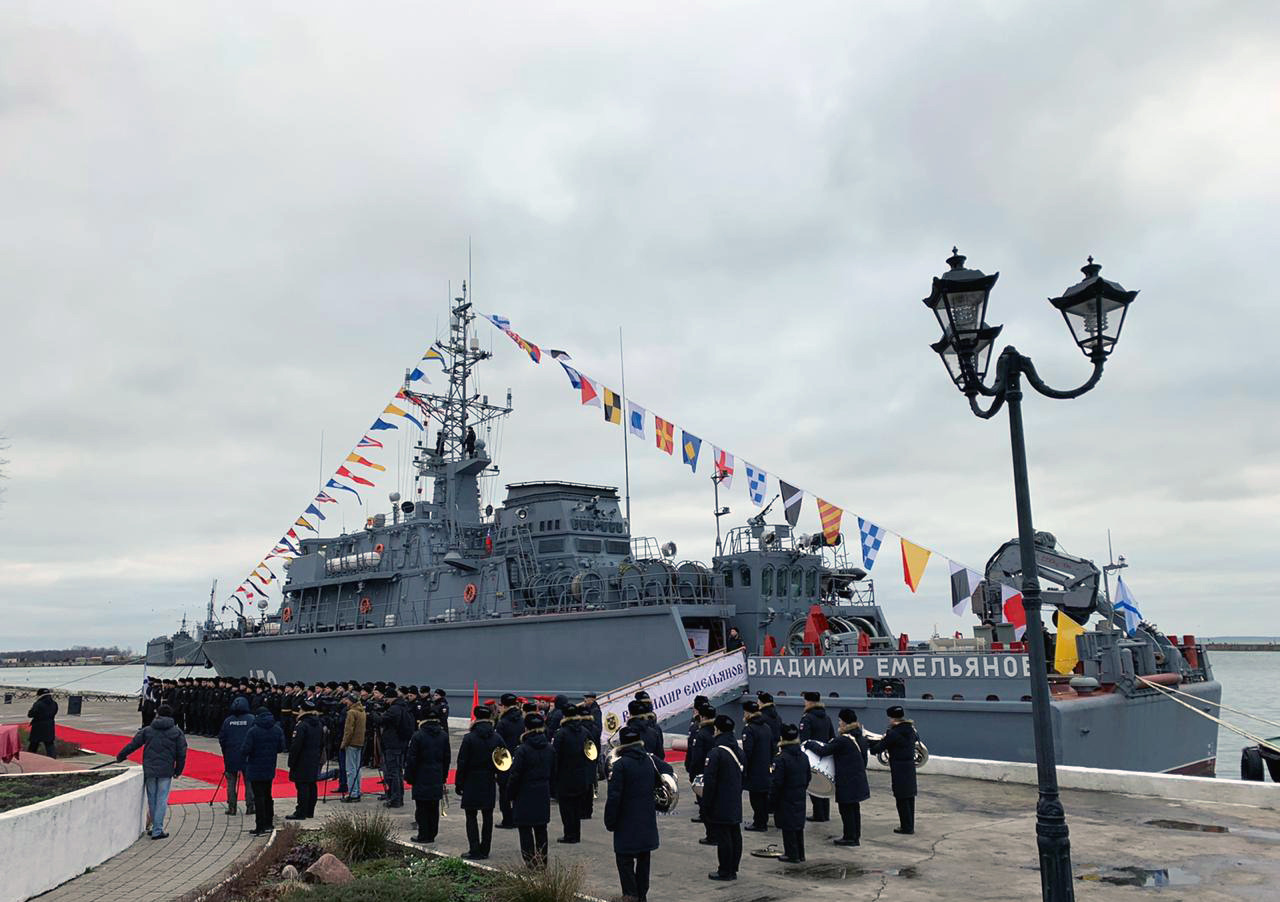 A lot of X-mas presents this year for the navy.

"Vladimir Emelyanov" will also be part of the 68th of ​​the Black Sea Fleet. 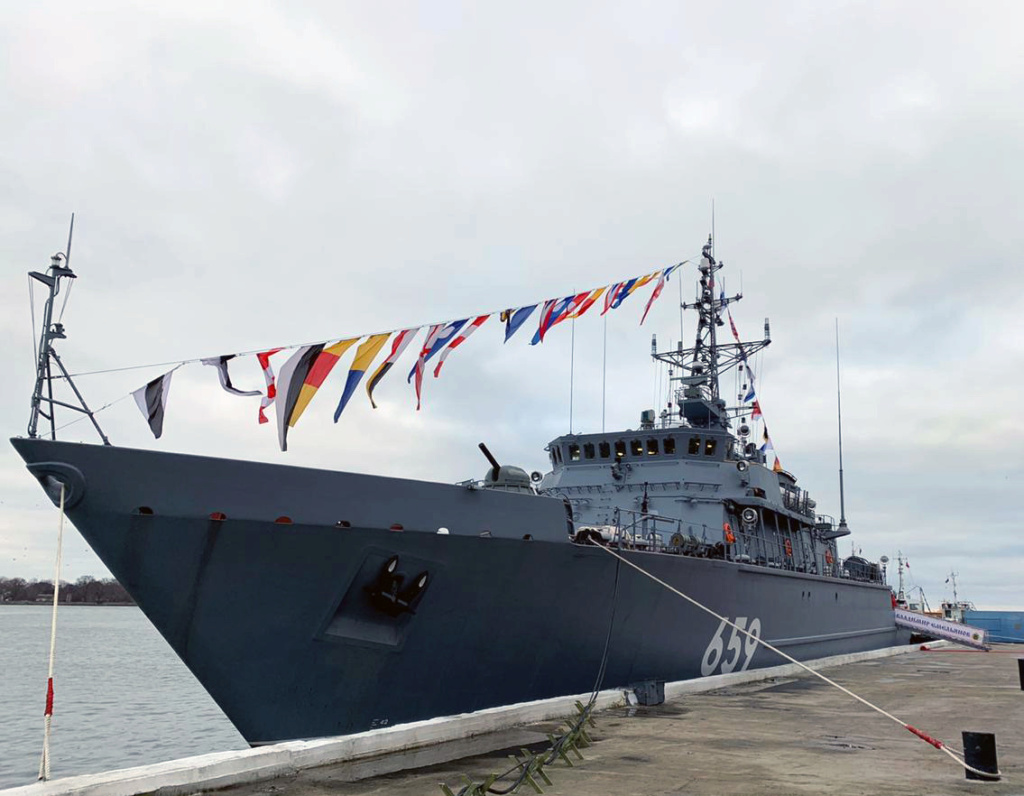 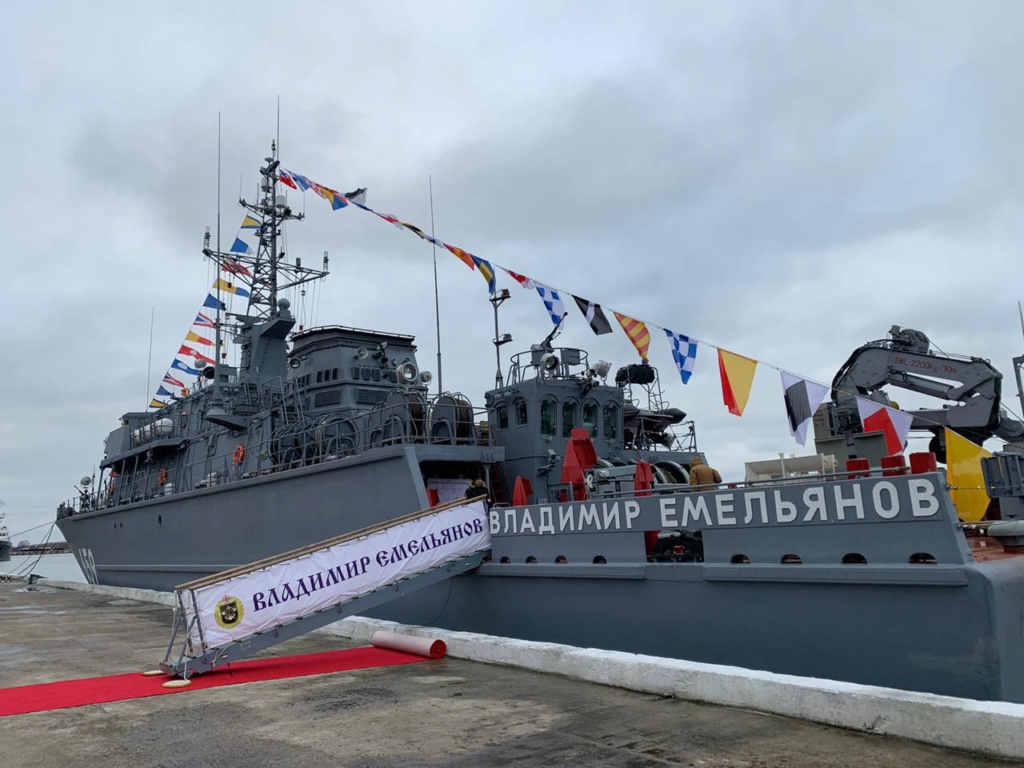 Sailors will soon be trained at the Joint Training Center of the Navy in St. Petersburg

TASS, December 29th. The crew of the latest Yakov Balyaev mine defense ship has been formed in Kamchatka, and the personnel will soon go to St. Petersburg for training, the press service of the Eastern Military District (BBO) in the Pacific Fleet said on Sunday.

"A crew (44 people) of the latest Yakov Balyaev ship was formed. In the near future, personnel will undergo training at the Joint Training Center of the Navy in St. Petersburg. Naval sailors will study the principles of building a new project ship and the basics of operation on basic specialties, "the press service said.

The minesweeper "Yakov Balyaev" is the fourth production ship of Project 12700, has a unique hull made of monolithic fiberglass and is designed to deal with any type of modern sea mines. The new ship was named in honor of the Hero of the Soviet Union, the sailor of the 355th separate battalion of the Marines of the Pacific Fleet, Yakov Illarionovich Balyaev.

The ships of this project have been in operation at the Navy for several years; they have established themselves as reliable, capable of effectively fulfilling assigned tasks.

"We are already producing these ships in series. As you see, we are moving towards developing and assimilating new technologies and each new ship gets even better," Shipyard CEO Vladimir Seredokho said at the minesweeper’s launch ceremony.

Project 12700 Alexandrit-class coastal-type minesweepers are referred to the new generation of minesweeping forces and are designated to fight sea mines, including smart naval mines, which the new ships can encounter in the sea and on the seabed without entering the dangerous zone. The minesweepers can employ various sweeps, as well as remotely controlled and autonomous underwater drones. The minesweepers of this Project displace 890 tonnes, are 62 meters long and ten meters wide and have a crew of over 40 men.

The shipbuilders will build a series of several dozen mine countermeasures ships of this Project for the Russian Navy in the immediate future.

The Project 12700 lead ship Alexander Obukhov was delivered to the Navy in 2016. In late 2018, the Sredne-Nevsky Shipyard transferred the Project’s second (first serial-produced) minesweeper Ivan Antonov to the Navy.

In 2020, the Nevsky Shipyard will launch at least two Alexandrit-class minesweepers

Shipbuilders to deliver five latest minesweepers to Russian Navy by 2023

These are the Yakov Balyayev, the Georgy Kurbatov, the Pyotr Ilyichev, the Anatoly Shlemov and the minesweeper with the factory No. 528, according to the shipyard

ST. PETERSBURG, June 23. /TASS/. The Sredne-Nevsky Shipyard (part of the United Shipbuilding Corporation) plans to deliver five Project 12700 mine countermeasures ships to the Russian Navy in 2020-2022, the shipyard said in its annual report published on Tuesday.

Russia’s Project 12700 Alexandrit-class coastal-type minesweepers are referred to the new generation of minesweeping forces and are designated to fight sea mines, which the new ships can encounter in the sea and on the seabed without entering the dangerous zone. The minesweepers can employ various sweeps, as well as remotely controlled and autonomous underwater drones. The minesweepers of this Project displace about 800 tonnes, are 62 meters long, have a crew of 44 men and an operating range of 1,500 miles.

The Project 12700 minesweepers developed by the Almaz Central Marine Design Bureau are under construction at the Sredne-Nevsky Shipyard in northwestern Russia (both companies are part of Russia’s United Shipbuilding Corporation). The Russian Navy has already received three minesweepers of this Project.

This year, the Sredne-Nevsky Shipyard plans to lay down the eighth Project 12700 Alexandrit-class minesweeper.

8th ship has been laid down. "Lev Chernavin" 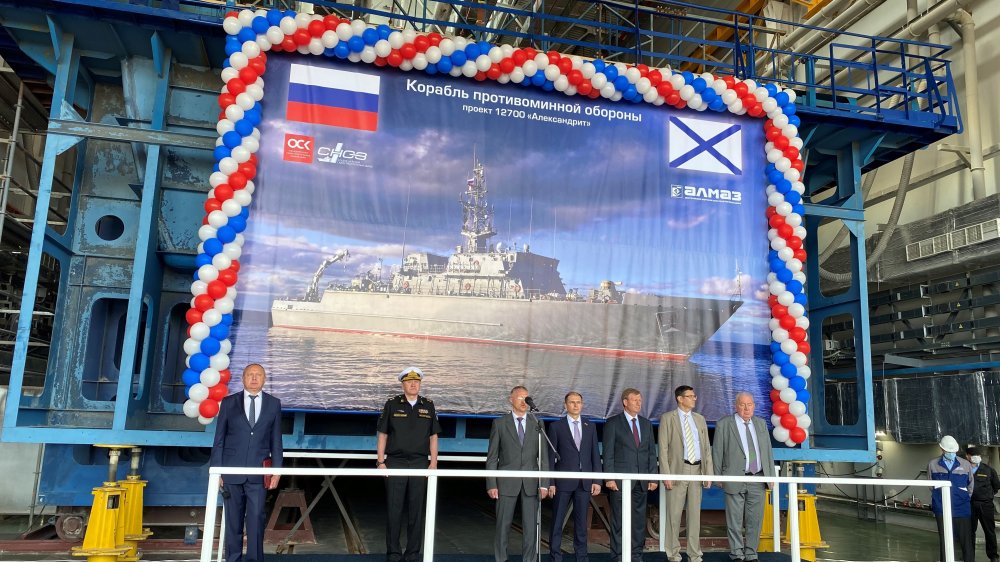 It is reported that on August 19, 2020, a new sea minesweeper Yakov Balyaev of project 12700 arrived in Murmansk , making the transition by tug from the Baltic to its permanent base in Petropavlovsk-Kamchatsky, where factory sea trials and state tests will be carried out. The transfer of the ship to the customer and enrollment in the Russian Navy should take place at the end of 2020 .. Arrived in Murmansk, the Yakov Balyaev sea minesweeper of project 12700 (serial number 525), is making the transition in tug from the Baltic to the place of permanent basing in Petropavlovsk-Kamchatsky, 19.08 .2020 (c) Gogs / forums.airbase.ru

The transfer of the minesweeper "Yakov Balyaev" from Kronstadt around Europe to Murmansk and further by the Northern Sea Route to Petropavlovsk-Kamchatsky is carried out by the sea tug "Antey" of the Russian company "Northern Alliance" LLC. The caravan, according to known data, departed from Kronstadt on August 3 and passed the Baltic straits on August 6. Arrival to Petropavlovsk-Kamchatsky is expected by the end of September.

It is interesting to note that the Antey tugboat, acquired by Northern Alliance LLC in Panama , arrived in St. Petersburg only on June 26, and the towing of the Yakov Balyaev minesweeper to the Far East became the first voyage for the tug under the Russian flag.

Recall that the sea minesweeper "Yakov Balyaev"(serial number 525) was the fourth ship built at Sredne-Nevsky Shipbuilding Plant (SNSZ, part of United Shipbuilding Corporation - USC) in St. Petersburg for the Russian Navy by a Project 12700 ship (code Alexandrite). The ship was officially laid down at SNSZ on December 26, 2017 and launched there on January 29, 2020. It will become the first Project 12700 minesweeper in the Pacific Fleet.