Hi all, Russian navy isnt my strong point, but have always be facisinated with the ZUBR class. It would be great if anyone can give some more info on the hovercraft other than that supplied from wiki, also does anyone know if it has ever been used in any conflict?????? Also any views on its use, capabilities, and its future(does it have one?). I remember seeing a clip on youtube of one landing on a beach full of sunbathers looooool, they were all pretty shocked.

China just bought 4 from Ukraine, 2 of which are yet to be made in China.
The Ukranians basically stole a Russian design and called it a new name- another reason why I want all defense ties with Ukraine cut to a minimum. Enough is enough, every Russian tax dollar spent in Ukraine when it could be spent in Russia is a crime (it is unavoidable in many cases, like Motor-Sich engines).

Not that the guys up top care about the taxpayers money, but what else is new.
flamming_python

TR1 you really don't like the Ukraine eh?
TR1

flamming_python wrote:TR1 you really don't like the Ukraine eh?

Their net trolls have been pissing me off

I want to see them wail in anguish and denial more.

EDIT: Also selling SAMs to Georgia before the war....should have consequences.
GarryB

Pretty soon Klimov will be making some of those important Motor Sich engines for helicopters so Russia is getting weaned off the Ukrainian engine nipple.

(interesting that the most powerful soviet engines for attack helos and medium transport helos as well as tanks came from the ukraine...)

The Zubr is very well armed with the twin 30mm gun turrets up front they also have fully retractable Grad rocket launchers for hammering a beach in preparation for a landing... if I remember correctly something like 10% of beaches world wide are suitable for landing ships in terms of depth and angles, while 70% of the worlds beaches are land able by hovercraft.
d_taddei2

GarryB wrote:Pretty soon Klimov will be making some of those important Motor Sich engines for helicopters so Russia is getting weaned off the Ukrainian engine nipple.

(interesting that the most powerful soviet engines for attack helos and medium transport helos as well as tanks came from the ukraine...)

The Zubr is very well armed with the twin 30mm gun turrets up front they also have fully retractable Grad rocket launchers for hammering a beach in preparation for a landing...  if I remember correctly something like 10% of beaches world wide are suitable for landing ships in terms of depth and angles, while 70% of the worlds beaches are land able by hovercraft.

yeah its pretty well armed its even has anti air capabilities and are capable of carry decent amount of troops etc. Wow never knew about landing % of beaches etc, good to know, i am sure i read some where that the ZUBR can scale 1.5m high verticle walls, pretty impressive.
flamming_python

Begs the question then as to why Russia seems to be moving away from its lead in hovercraft landing and combat vehicles.
GarryB

They are expensive and not efficient in terms of propulsion, though for a landing vessel they are the most effective and efficient available as they can land on ground to soft to drive through (marsh/river delta/quicksand) but too thick to sail through... and as a super bonus they float/fly over land mines that might have been positioned on likely beaches.

I rather suspect new hovercraft that can operate from the new Mistrals might be developed as operating from a mothership greatly extends their operational range and allows better flexibility for the landing forces.
d_taddei2

the uses of the ZUBR are fantastic, all the typres of terrain that it can glide over especially marshes where an enemy wouldnt be expecting an attack from never mind, something like this,and unloading armoured vehicles and troops on mass would overwhelm them, and then you still have the grad launchers and 30mm cannons,

obviously they are probably quite weak against missle boats etc. the mine thing is pretty cool, i read this aswell that it is protected from magnetic influence mines with an active system to compensate for the magnetic fields generated by the ship and transported materials, cool

Is there any possibility to restart "Zubr" class production at Feodosiya shipbuilding for RU Navy?
George1

Is there any possibility to restart "Zubr" class production at Feodosiya shipbuilding for RU Navy?

zg18 wrote:Is there any possibility to restart "Zubr" class production at Feodosiya shipbuilding for RU Navy?

I`m quite sure there is also place for few "Zubr" hovercrafts.

I`m quite sure there is also place for few "Zubr" hovercrafts.
PapaDragon

This could mean more Zubrs might be coming to to RU Navy too?

This could mean more Zubrs might be coming to to RU Navy too?


The Morye shipyard that designed these Zubr vessels is a Russian plant, so the task is to fulfill this contract signed between Ukraine and China, Rosoboronexport deputy CEO Igor Sevastyanov explains

Russia is set to resume the construction of Project 12322 Zubr-class air-cushion landing craft capable of delivering three main battle tanks weighing up to 150 tons or 10 armored personnel carriers with marines to the unequipped coast. The new Zubrs will supersede the Project 21820 Dugon-class air-cavern landing craft having a lower load-carrying capacity. The construction of the first all-Russian Zubr ships is to begin in 2018, newspaper Izvestia reported. 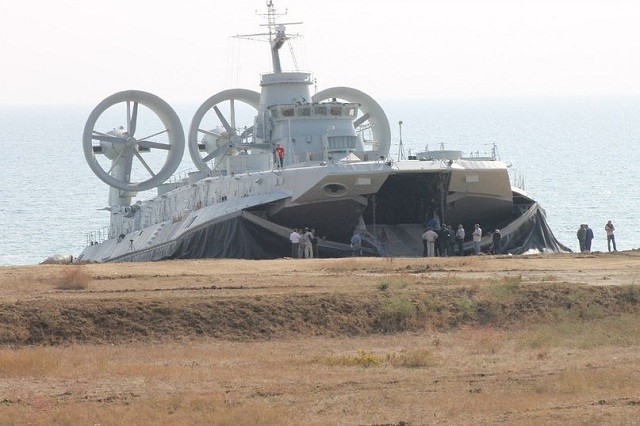 Project 12322 Zubr-class air-cushion landing craft (pictured here: Sea trials of Ukraine-built Zubr-class intended for the PLAN
The issue with the contractor is being considered, a source in the Main Navy Command told Izvestia. It is planned to invite the Almaz shipbuilding plant in St. Petersburg, Feodosia’s More Plant, Khabarovsk Shipbuilding Yard, and possibly Kaliningrad-based Yantar Shipyard to participate in the tender. All these enterprises built or maintained air-cushion ships at different times.

Almaz is the front-runner in the list. At one time, it built ten Zubr craft for the Soviet Navy. The plant also participated in the delivery of Project 12322 ships to Greece. Meanwhile, it is currently busy building floating cranes and border guard ships. Feodosia’s More Plant had built two Zubr ships for China under Ukroboronprom’s contract before the return of Crimea to Russia. There is still one incomplete hull of the air-cushion ship at the enterprise. In 2004-2006, JSC Khabarovsk Shipbuilding Yard built the Project 12061 Murena-class boats for South Korea. The Yantar Shipyard in Kaliningrad has also been invited to participate in the tender. The company has experience in repairing Evgeny Kocheshkov, one of the two Zubrships operational with the Baltic Fleet. However, as the Command noted, the invitation of this enterprise to the tender is rather a formality. Yantar will soon focus on completing three Project 11356 frigates. Their construction was frozen because of Ukraine's refusal to supply the Zorya-Mashproekt-made power plants pre-paid by Russia.

"The resumption of Zubr craft construction is primarily connected with launching gas turbine units at the Saturn Plant," expert Andrei Frolov told Izvestia. "These are good ships for which there is always a niche. Such a high-speed landing craft will be in demand in the enclosed theatres of naval operations like the Black, Baltic or Caspian Seas. In such a manner we also maintain our competences in the construction of large air-cushion ships. "

According to the expert, the existing amphibious ships of the Dugon and Gyurza projects are not enough to accomplish the tasks facing the Navy and the Marine Corps. "We still do not have good diesel engines, which led to problems with the Dugons," added Andrei Frolov, "The Zubrs have already been tested, proved themselves and even enjoyed demand abroad."

The Project 12322 craft has a length of 57 meters and a beam of 20 meters. The displacement of the ship is 535 tons and the draft is 2 meters. It is powered by high-temperature gas-turbine engines. Four fans with a diameter of 2.5 meters provide an air cushion for the ship. The ship is propelled by another three variable-pitch propellers of 5.5 meters in diameter and develops a speed of 70 knots.

The ship is able to land troops onto the unequipped coast. Another feature of the Zubr is a reduced visibility for radars. This effect is achieved due to the fact that the ship moves in a giant cloud of spray that "blurs" its outlines on the radar screens.

In addition to amphibious lift, the Zubr can plant minefields and, if necessary, provide fire support to the amphibious force. Two Grad-M multiple rocket launchers are installed on the ship. By the beginning of the 1990s, the Soviet Navy had operated eight Zubrs. After the collapse of the USSR, Ukraine inherited five of them and Russia three, Izvestia recalls.

It is also logical, Russia currently has only two of them at Naval Base Kaliningrad, Baltic Fleet.
George1

The warship entered service with the Baltic Fleet in October 1991

"The ship will arrive at the Shipyard for repairs in late October - early November," the spokesman specified.

The amphibious assault ship will be repaired on the slipway of the Yantar Shipyard (part of the United Shipbuilding Corporation) and the scope of the repairs and their continuity will be specified after the ship undergoes its inspection for likely defects, he said.

The Project 12322 ‘Zubr’ air-cushion small amphibious assault ship Mordovia entered service with the Baltic Fleet in October 1991. The ship is designated to sealift amphibious assault personnel with their combat hardware from equipped and unequipped shores and land them onto an enemy coast with the provision of fire support for the landing force. The warship can also transport and plant sea mines. The air-cushion design allows the ship to move over the ground.

Four compartments with 140 seats accommodate the amphibious assault force. Instead of combat hardware, the warship can take 366 more personnel on its board. The Mordovia displaces 555 tonnes and can develop a speed of 60 knots (about 110 km/h). Zubr-class ships are considered as the world’s largest air-cushion vessels. The Mordovia is armed with two A-22 ‘Ogon’ launchers for 140mm rockets, two AK-630 30mm automatic artillery guns and eight Igla man-portable anti-aircraft missile systems.

Read this thread this morning and then found this while browsing later:

They don't ship them here, but it looks quite cool.

There is a video of use on the page.
PapaDragon

Another warship will become a museum in Sevastopol. This will be the Soviet MDK-93( after December 1995 - ukrainian Gorlovka U423),a Pomornik Class amphibious hovercraft.The ship was decommissioned in 2011 and was stored at the Shipyard in Feodosia 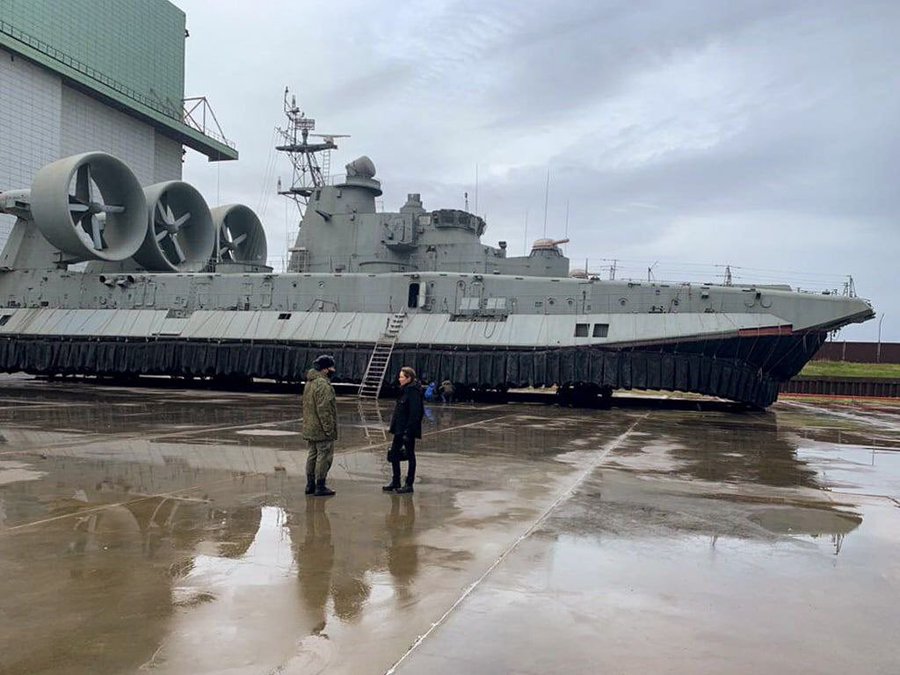 That link has other pics and it looks to be in great condition. Why was it decommissioned it in the first place? I assume it was because the Ukros are cashless incompetents, so I guess the Russian Navy should officially thank the Ukropi for their heart-felt gift.

They were supposed to start producing domestic propulsion assemblies for them, weren't they?
PapaDragon

LMFS wrote:They were supposed to start producing domestic propulsion assemblies for them, weren't they?

Live firing of Mordovia MDKVP in the Baltic Sea

The outside external firing position is for shooting at mines and things in the water or visible on the beach but the internal position uses both guns and is for shooting down threats and hostile air targets.

The outside external firing position is for shooting at mines and things in the water or visible on the beach but the internal position uses both guns and is for shooting down threats and hostile air targets.

I was under the impression that AK-630 family of CIWS were fully automated/automatic. Such that target tracking and firing are done via software. But from the video, it appears as though the shooter is actually able to manually manipulate the gun itself.
Sponsored content