Projection of force in the ocean

Can't read russian but seems the news is about the RUssian Frigate Gorshov class..  Not the destroyer. :/

They are talking about 'Leader' project, which will be a destroyer.

Details still up in the air as the Navy is deciding what it wants. Upscaled Gorshkov or 13,000 ton nuclear cruiser.
Austin

Northern Fleet will receive more than 40 ships by 2020

Upon completion of the trials, the two boats – the Borei-class Vladimir Monomakh nuclear missile submarine and the Yasen-class Severodvinsk attack submarine – will be the newest addition to Russia’s sub fleet.

“Once navigation at sea opens this summer, the Vladimir Monomakh and Severodvinsk submarines will begin tests. Operations on all Sevmash nuclear submarines are run under the control of the leadership of the Russian Navy,” the company said in a statement.

Admiral Vladimir Korolev, the commander of the Northern Fleet, said Sunday the Vladimir Monomakh will enter into service later this year and will conduct a test launch of the navy’s new Bulava nuclear-capable ballistic missile before becoming fully operational.

Sevmash also said that hull work on the Yasen-class Novosibirsk submarine has been completed, and the boat will now undergo hydraulic testing, adding that the next Borei-class submarine, the Knyaz Vladimir, has completed such testing and is currently preparing to take on large equipment.

The Russian Navy is expected to receive 40 new warships and auxiliary vessels this year, including a variety of surface ships of various classes in addition to the nuclear submarines. The Russian Defense Ministry is currently carrying out a massive rearmament for the navy and air force as part of a series of modernization efforts
Viktor

Russian Navy to double the order for modular corvettes
TR1

Still not sold on how modular the end product will be. The other question is why does Russia need a dozen high endurance, not main combat ships like this...

Zelenodolsk is set for the rest of the decade, between this, the 21631s and the Vietnamese frigates.
Hopefully they start making ships faster as a result.
Viktor

this should have been done years ago ,navy need a good "manager" to put all those technologies and corporations to the full use for the navy...
navyfield

Russian Navy to double the order for modular corvettes

bad call. 50% increase in frigate numbers would have been better.
TR1

Russian Navy to double the order for modular corvettes

bad call. 50% increase in frigate numbers would have been better.

You know the costs would also have been, much much higher too right?

Still not sold on how modular the end product will be. The other question is why does Russia need a dozen high endurance, not main combat ships like this...

In many ways these new light patrol boats are like previous generation Frigates... in terms of fire power they are actually generally better armed but lack endurance.

These long endurance patrol boats could fully operate the same way frigates in the past were used, which makes them lighter and cheaper but still effective.

Their modular design means they should be able to produce them serially very rapidly and in terms of future upgrades they should be fairly easy to upgrade and to maintain.

this should make them rather cheaper than older custom made designs.


bad call. 50% increase in frigate numbers would have been better.

I am still not sure about you... are you trolling... saying stupid stuff to get a reaction, or are you really not very smart...

They have increased the numbers of these patrol boats because they are successful... patrol boats are needed whether you think so or not and they have clearly decided that these boats are ready for service.

When they get their Frigate designs into the water and tested they will make a decision as to whether it needs further changes/upgrades, or if it is ready for service. When it is ready for service they will likely increase production orders by 200%. The fact that they cancelled the last Talwar class boat order suggests they have confidence in the Gorshkov design.
TR1

BTW will Kuznetsov got hmm some sort of new phased array to replace the Mars-Passat ?

As far as i read Russian AN/SPY-1 like radar the Mars-Passat was about to be installed at Kuznetsov but due to some unknown factor it's cancelled and i heard the place for the antenna array was filled with cement instead.

It did not work at the time, and in the 90s nobody had time or money to make it work. Nonfunctional today.

If they do intent to go through with the heavy overhaul, I would be pretty shocked if they did not put at the very least Poliment in the tower.
Flyingdutchman

Sevmash has built the first pontoon to get the Nakhimov into the basin.
Viktor

Looks awful similar to those Soviet-era cruiser projects, photos of which floated around the web sometime ago.

I suspect this has nothing to do with "Leader".
Vympel

TR1 wrote:Looks awful similar to those Soviet-era cruiser projects, photos of which floated around the web sometime ago.

Doesn't look very Soviet era though. It may very well have nothing to do with Leader, though.

Agree, probably it is not something related to Leander project.
It may be a modified 22350.
Actually I believe the one on its right side is a modified 11356 frigate judging by the layout of the structure.
TR1 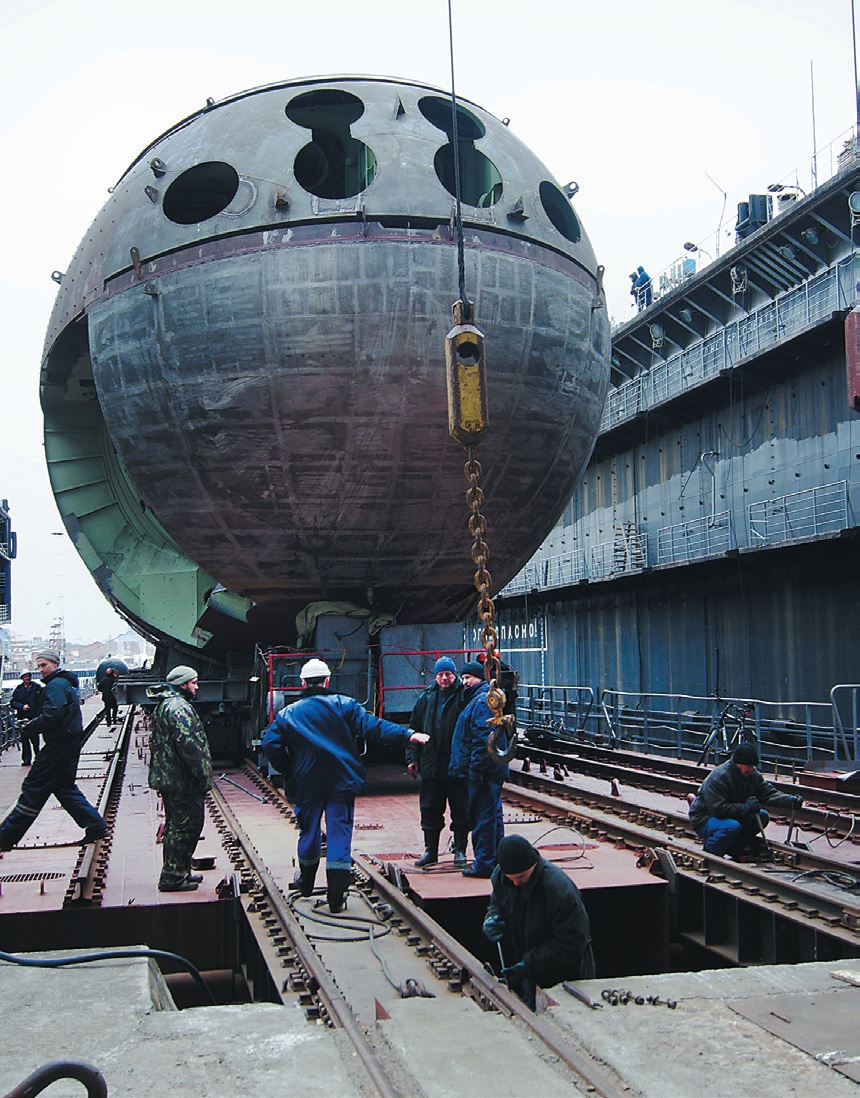 Currently submarine "Severodvinsk" is at the waterfront pier deep Sevmash plant in the floating dock "Sukhona." Also of the shops was withdrawn nuclear submarine project 955 "Vladimir Monomakh". Previously reported that the test "Severodvinsk" resume , tentatively in early June and will last for several months, during which the submarine to be several times to go to sea.

Some great photos of the Archangelsk and Severstal sitting in reserve.
Gotta say, just from these photos, they look like they are being preserved quite well.
Flyingdutchman

Some great photos of the Archangelsk and Severstal sitting in reserve.
Gotta say, just from these photos, they look like they are being preserved quite well.

What a huge subs russia has