What they're really trying to say is "Russia is not even allowed to have a organized military, even on it's own territory."

The key part is the reference to Russian "claims" on the Arctic.  Thanks to geology, Russia has basically all of the fossil fuel
deposits in the Artic basin outside of the Beaufort and Alaskan shelf.   Even the USGS map of the potential deposits puts
most of them in Russia's EEZ.   So Russia does not need to make any "claims".   It is trying to make sure that NATO does
not grab these resources by force in the near future.

How would NATO grab them.  Well, it could grab Russian islands in the Arctic based on various pretexts.  It could also
just ignore the concept of the EEZ because being a pack of imperial crusaders for NATO, might makes right especially since
the angels are on their side.

US ‘woefully behind’ in Arctic – Alaska senator
Kyo

That's it!! The man's got the MSM on a fishing line!
Cyberspec

The hell, looks like it needs more armor not sure if that windshield's even bulletproof, room for more soldiers and where's the turret??

Think mobility, not something you would ride right into enemy positions on.
Regular

http://transport-ttm.com/en/production/ttm3/?ItemID=1305
Here is other vehicle that company makes. I bet it will fit there nicely
TheSentinel

With the Northern Fleet and the 200th IMRB under the new Arctic command, I think it will operatew on a year-round basis.

Having said that, the trainings will be completely different because of the seasons but the new Arctic command will have a huge responsibility for the future of Russia in the Arctic; protect the investments in oil, minerals and natural resources.
Cyberspec


The Ministry of Defence is planning to adopt a range of light articulated tracked transporters DT-3.
It will include an option for motorized infantry armored branch DT 3RM, unarmoured DT-4P and a special chassis.

Also, sounds like work is being carried out on armoured versions of the DT-10 and DT-30 as well as some (as yet unnamed) wheelled vehicle

Russia's Defense Ministry has taken on the supply of snowmobiles and ATVs that have been tested in arctic conditions.


"Russian Defense Ministry accepted to supply units Arctic military snowmobiles and ATVs that have been tested in late 2014," - said the deputy defence minister.

According to him, the Army completed acceptance testing of a snowmobile equipped with a heated cabin, and preliminary tests articulated tracked transporter easy category DT 3PM and GAZ-3344-20 .

According to him, for use in extremely low temperatures (down to minus 60 degrees Celsius), a large park, multi-purpose vehicles produced modernization was already in service with the Russian Armed Forces units KAMAZ trucks and Ural. "The modifications are primarily aimed at warming the cabin, installation of glazing heating, the use of stand-alone engine heaters. All our work is aimed at ensuring the Arctic units with modern appliances, which should provide a comfortable environment for military and qualitative performance of their tasks in extreme temperatures ", - concluded the official.

A few pics of the mentioned vehicles

Air defense systems in the Arctic will have electronic warfare "Krasuha"

Makarov added that MiG-31 jets would protect Russian warships that could sail along the Northern Sea Route in case of any escalation or armed conflict scenario.

Bolstering Russia’s presence in the Arctic region is part of the country’s military strategy through 2020. Russian President Vladimir Putin said in late 2014 that Russia is not planning to militarize the Arctic, but is taking necessary measures to ensure its security in the region.

Checkout this graphic, blue highlighted areas show part of the Arctic that has dissipated, guess which side will have a easier time dominating the Arctic...

I recall the endless yapping in Canada and elsewhere about the North-West passage. As the sea ice recedes there was going to
be a new shipping corridor through Canada's Arctic islands. This was and still is such a load of nonsense. The straits through
the Canadian Arctic archipelago are rocky and shallow and the ice does not clear all that fast. But what is the real killer is that
the path from Europe to China is shorter following the North-East passage north of Russia and not doing a large detour around
Greenland to navigate a bunch of crappy straits. And this is exactly what you see: shipping going through Russia's EEZ.

Part of the yapping was about Russian submarines violating Canada's territorial waters. The only scenario under which I can
see this having ever happened was if the Russian subs were chasing or being chased by US submarines. The paranoia reminds
me of the recent hysteria in Sweden about some alleged Russian submarine that was never there.
Viktor


"The Arctic region is Russia’s vast mineral wealth, comprising primarily hydrocarbon reserves. In fact, it is a physical confirmation of the unique status of Russia as an outstanding energy power. It guarantees for us independent energy resource supply of our industry," Rogozin said. "But the Arctic is also the Northern Sea Route - the shortest route from Asia to Europe. The Kamchatka Peninsula can become ‘a hub’ for replenishment and repair of ships. Kamchatka is a gateway to the Arctic. Arkhangelsk is another gateway." The O-14 well extends 13.5 km deep and then follows a horizontal line for another 12 km.

The O-14 well extends 13.5 km deep and then follows a horizontal line for another 12 km.

Yeah, Russia badly needs western technology.   It is just so far, far behind the west.   //sarc

But its said that it used ExxonMobil drilling technology combined with their own. But with that being said the deepest drilling operation in history was done with Soviet technology in 1981 (Kola Superdeep Borehole), so even without Exxon's drilling technology, the Russian side with a little time likely would of produced their own tech for the operation.

The critical thing is to have funding for research and development. This dried up during the 1990s and has recently
become normal again. Using Exxon tech is the optimal solution to compensate for the gap. But I really do not see
where there are any development gaps today. Russian industry has assimilated all the essentials: maximal contact
drilling, 3D seismic tomography, etc. Soviet drilling tech (e.g. lubricated hydraulic drive diamond drill heads) was advanced already.

Could prove to be a significant development regarding Arctic drilling... 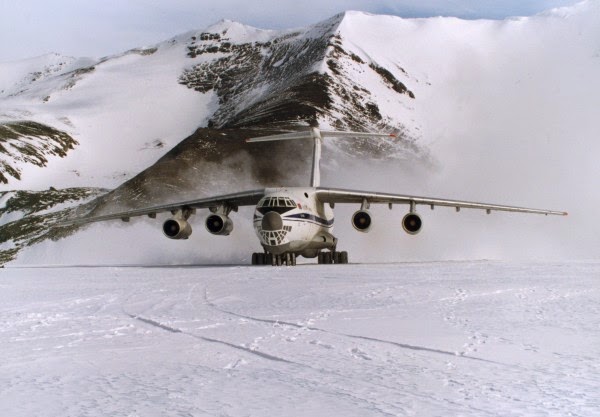 Although the term air "field" can only apply loosely here since there is no field there, only snow-covered ice.
The aircraft delivered 80 people and three tons of equipment for developing infrastructure on the archipelago. Lots more pics and info at below link

Russia’s military infrastructure on Cape Schmidt, Wrangel Island to be built by late 2015

To protect Russia’s interests in the Arctic, the Joint Strategic Command was formed in 2014 in the polar zone on the basis of the Northern Fleet

KHABAROVSK, May 15. /TASS/. The development of the military towns’ infrastructure on Cape Schmidt and Wrangel Island in the Arctic zone of Russia’s Eastern Military District will be completed in 2015, the military district spokesman Alexander Gordeyev said on Friday.

"The second phase of military facilities’ construction has started in the military camps of the Arctic zone during which it is planned to complete the infrastructure development on Cape Schmidt and Wrangel Island - equipping of the combat duty positions and life support systems will be completed. It is also planned to restore the airfield on Cape Schmidt," the spokesman said. According to him, construction equipment and building materials have already been unloaded in the area of Bukhta Rodzhersa Bay on Wrangel Island and Vostochnaya Bay on Cape Schmidt.

To protect Russia’s interests in the Arctic, the Joint Strategic Command was formed in 2014 in the polar zone on the basis of the Northern Fleet. Force groupings, combined in the Joint Task Force, have already been formed on the Novaya Zemlya, New Siberian Islands, Wrangel Island and Cape Schmidt. The "North" Joint Strategic Command responsibility area includes the North Pole. The Defence Ministry is building a total of 6 military towns in the Arctic, including on the Chukchi Sea coast and in the area of the Amderma settlement, which will make it possible to control the Northern Sea Route. Head of the Russian National Defence Control Centre Mikhail Mizintsev said previously that Russia is building in the Arctic 13 airfields, 1 aviation range and 10 positions of radar units and air guidance stations.

Russia’s President Vladimir Putin said previously that the formation of the Northern Fleet Joint Strategic Command has enhanced security in the Arctic, promoting modernisation of military infrastructure in this important for Russia region.

The Arctic Joint Strategic Command was launched on December 1, 2014. It was formed on the basis of the Northern Fleet. A Russian Defence Ministry source told TASS previously that a self-sufficient troops group would be formed in the region by 2018. It will comprise, in particular, an air force and antiaircraft defence army the creation of which was announced by Chief of the Russian General Staff Valery Gerasimov. In addition, two separate motorised infantry brigades are being formed. The new command, based on the Northern Fleet and headquartered at Severomorsk, will acquire military, naval surface and strategic nuclear subsurface, air force and aerospace defence units, assets, and bases transferred from Russia's Western, Central, and Southern (but not Eastern) Military Districts, with which it will, importantly, be on a par. The creation of the new command was ordered by Russian President Vladimir Putin on 24 November. The Northern Fleet will be absorbed in its entirety into the command, together with substantial elements of the 1st Air Force and Air Defence Command.
Viktor

A Government Accountability Office report says that the US Department of Defense is stepping up its military capabilities for increased activities in the Arctic Ocean region.


[The Department of Defense] has taken actions, along with interagency partners, to address some near-term capabilities needed in the Arctic, such as maritime domain awareness and communications,” the report, released on Friday, said.

The report outlines the increased military deployments in terms of their missions capabilities.

“[The Department of Defense] continues to monitor the security environment in the region and is tracking indicators that could change its threat assessment and affect [its] future role,” the report said.

The GAO noted that the Defense Department’s Implementation Plan to the National Strategy for the Arctic Region created a framework and identified activities to address many of the needed capabilities.

The GAO explained that the US Navy's Arctic Roadmap document includes “an implementation plan and timeline for operations and training, facilities, equipment, and maritime domain awareness, among other capabilities.”

Moreover, the US Northern Command is updating the Commander's Estimate for the Arctic with “near-, mid- and long-term goals,” the report noted.
The Northern Command is also “conducting studies of various Arctic mission areas, such as maritime homeland defense and undersea surveillance, to identify future capability needs,” it said.

The Government Accountability Office is an independent, nonpartisan agency that works for Congress and investigates how the US federal government spends taxpayer dollars.