Last week, Denmark announced its plans to establish an Arctic military command and a task force amid conflicting territorial claims by the five Arctic states.

Commenting on the development, Andrei Nesterenko told journalists that, "Russia is opposed to the unleashing of an arms race in the Arctic Region and suggests as an alternative the boosting of bilateral cooperation in issues of navigation safety, search and rescue and the prevention of ecological disasters."

He added that it was in Russia's national interests to maintain peace and cooperation in the region.

The Arctic territories, believed to hold vast untapped oil and gas reserves, have increasingly been at the center of disputes between the United States, Russia, Canada, Norway, and Denmark as rising temperatures lead to a reduction in sea ice.

In March, the Russian Security Council outlined Russia's strategy in the region, including the deployment of military, border and coastal guard units "to guarantee Russia's military security in diverse military and political circumstances."
medo

I read, that Russian army will create arctic brigade. Do they also plan to build radar and air defense in arctic region or it will be in hands of AWACS planes and fighter planes like Mig-31?
Austin

medo wrote:I read, that Russian army will create arctic brigade. Do they also plan to build radar and air defense in arctic region or it will be in hands of AWACS planes and fighter planes like Mig-31?

Putin and Medvedev has stated many times before that they want to resolve Arctic issue peacefully so I do not see any defense build up happening at Arctic and it doesnt make sense as well , there is enough out there to make every one happy and Russia side of arctic has huge gas reserves so there is nothing to gain as they have what they want.

Most of the Arctic brigade are posturing and more like a quick reaction team to show russian presence.
GarryB

I read, that Russian army will create arctic brigade.

I read, that Russian army will create arctic brigade. Do they also plan
to build radar and air defense in arctic region or it will be in hands
of AWACS planes and fighter planes like Mig-31?

I think this will be much like their mountain brigades... these will simply be units that are specially trained for specific conditions of operations.

The Russian forces have been split into 4 military districts... Western, Central, and Eastern districts have Arctic regions that will need Arctic trained brigades.
These brigades will likely have their own organic air defence components, but the responsibility for air defence in Russia seems to be something new with a combination of the air defence forces of the Air Force (ie the PVO) together with the relatively new Space Forces, which operates and manages Russias satellites.
I don't know whether this new air and space defence org will be split up and subordinated to the four military districts, but the description of being responsible for the air above Russia from ground level out into space to detect and track and deal with all threats... cruise missiles to ballistic missiles and everything in between seem to suggest the use of ground based radar, airborne assets like AWACS, and satellite based assets. Their job is to also deal with such threats using SAMs, interceptor aircraft (Mig-31s and Flankers) and presumably ABM systems like the Moscow system and soon the S-400/-500 combination. They will also likely share their information with air and ground and naval forces.
Russian Patriot

Russian Defense Minister Anatoly Serdyukov said in July 2011 that two arctic brigades would be established in “Murmansk or Arkhangelsk or some other place.”

President Dmitry Medvedev has called for “extra measures” to protect Russian interests and reinforce its borders in the Arctic.

Russia is to deploy a combined-arms force to protect its political and economic interests in the Arctic by 2020, including military, border and coastal guard units to guarantee Russia's military security in diverse military and political circumstances.

I wonder how their vehicles and equipment will differ from units in other regions.

I suspect hovercraft might be useful for them, and I suspect their very long range snipers will also be critical in a future incident.

Helicopters and ships would be useful for rapid deployment...
Viktor

In remotest Russian Arctic, a new Navy base
Viktor

He added that a number of foreign countries are now worried about the fact that Russia deploys troops in the Arctic. "Next year, I think we mostly complete program deployment of troops on the Franz Josef Land, Novaya Zemlya, engaged in researching Wrangel Island. Thus, the entire zone will be closed," - said Shoigu.

lol what are they worried about? Russia's gonna launch a polar bear genocide? Capture and kill Santa? That guy is a pansy compared to Grandfather Frost anyways.

Russia and Norway have figured out their issues to a large extent, I am unaware of any disputes with Finland....I am guessing the ones worried are Canaduh (understandable from their perspective I guess), and ofc America sticking its nose where it does not belong.
flamming_python

TR1 wrote:lol what are they worried about? Russia's gonna launch a polar bear genocide? Capture and kill Santa? That guy is a pansy compared to Grandfather Frost anyways.

Russia and Norway have figured out their issues to a large extent, I am unaware of any disputes with Finland....I am guessing the ones worried are Canaduh (understandable from their perspective I guess), and ofc America sticking its nose where it does not belong.

To be fair, America has Alaska and therefore it's Arctic border is right next to Russia's, and they're not making any claims that I know of.
Canada on the other hand seems to be butthurt at the success of the Lomonosov ridge claim in the UN court, and has now announced its own claims which encroach on Russia's claimed territory.

Finland doesn't have an Arctic border.

Norway and Russia concluded a demarcation treaty a few years back; it was quite generous to Norway actually. As a result - zero problems from that direction.

Denmark (via Greenland) has Arctic claims too. And you know, they do seem a little like the they might be the next butthurt country with no navy to speak of to come out of the closet with claims on the Lomonosov ridge

its zone 350 miles from territorial waters unlike Russia.

​Canada to include the North Pole in its claim for Arctic territory, resources 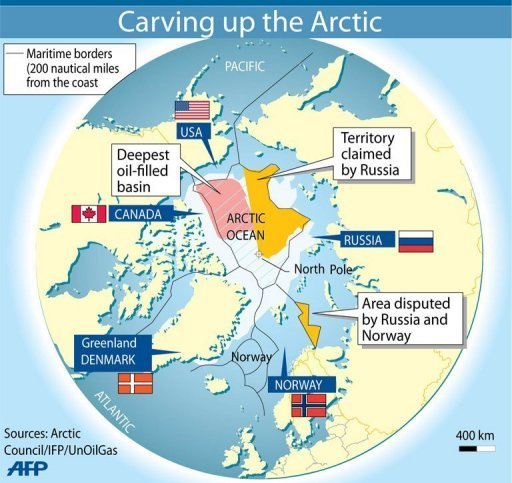 And Canada has been aligning with USA in a military way

and than came Russian response

Putin ordered Russia to expand military presence in the Arctic 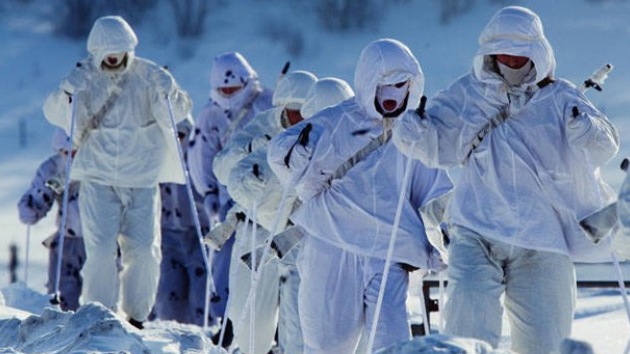 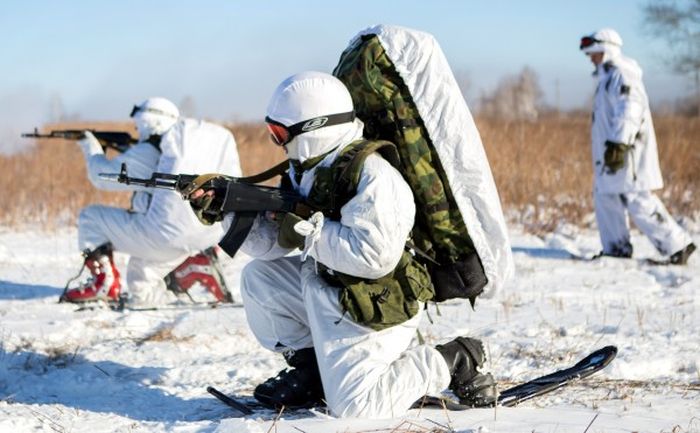 and besides resources Artic is important for Russia security

“Experts know too well that the flying time of American rockets from Barents Sea to Moscow is 15-16 minutes. So what should we do – give up the Arctic? We, on the contrary, have to utilize it!”


but at first, Russian response was


Natural Resources Minister Yuri Trutnev's statement comes as Russia is strengthening efforts to defend its claims to parts of the Arctic, which is believed to contain as much as a quarter of the Earth's undiscovered oil and gas. Russia, the U.S., Canada, Denmark and Norway have all been trying to assert jurisdiction over parts of the region, which is promising new opportunities to tap its oil and gas resources as the polar ice shrinks.

"Our sector in the Arctic is estimated to contain up to 100 billions tons of resources," Trutnev told a small circle of reporters on Tuesday.

Russian Army is getting ready for Artic

The modified Mi-8 will feature a more powerful engine, an auxiliary electric generator, an ice-protection system and ski landing gear for landing on soft snow and swamps.
“The helicopter’s heating system will be based on technologies used on spacecraft,” said Sergei Solomin, the plant’s chief engineer.
Austin

100 billion Tons of Oil Equivalent is good enough for any country to Invade Russia had it been a weak power , so keep the powers dry.
GarryB

Keep the powder dry... (ie gunpowder does not burn when wet)
Austin

This seems as appropriate a thread as any, so here goes.
Some countries require prior notice or approval for warships to pass through their territorial waters, within the framework of the UNCLOS. Does Russia require any such notice or authorization before hand for passing warships? The USS Yorktown incident in the 80's comes to mind.
Also what is the Russian stance on warships inside their EEZ but outside both their territorial and contiguous waters? In the past there have been incidents with NATO submarines (mostly collisions or near-collisions) well within the Russian EEZ.

Also what is the Russian stance on warships inside their EEZ but outside both their territorial and contiguous waters?

AFAIK Russias stance is that they follow international law.
Austin

Good primer on Russian Arctic resource including minerals and oil

7. Although Russia Russia its reserves of "black gold" is almost behind the previous countries - 6% of world reserves, oil is already here can result in 22 years.

Again, these "22 years" ..
Only proven oil reserves (all categories) in Russia is estimated at 28.8 billion tons. Even with a record production of 523 million tonnes per year will be enough for 55 years.

In addition, Russia's largest reserves of shale oil in the world, which is now mined in full swing states:

This is another 20 years of production at 523 million tons per year.

Huge oil reserves (undiscovered) are on our Arctic shelf. Here are rough estimates:

In the Arctic, according to Russian experts, is now "hidden" about 80 billion tons of fuel and 80 percent of this volume constitute gas reserves.

another 30 years of oil production by 533 million tons per year.

And another huge untapped oil fields on the mainland:

Major oil and gas regions of Russia and one of the largest oil producing regions of the world is the Khanty-Mansi Autonomous Okrug. Despite the fact that the county takes only 3% of the territory of Russia, he was for many years, provides 57% of oil production in the country. It opened more than 500 oil and gas deposits, reserves of about 20 billion tons. Probable oil reserves are estimated at 35 billion tons.
...
Today KhMAO ranks first in Russia in terms of oil production. In 2011, the share of Yugra had more than 50% of total Russian production of hydrocarbons. All extracted oil - more than 10 billion tons - is only a third of what has yet to get here. A total reserves of oil in the bowels of the region could reach 100 billion tons

Another plus 70 years of production at a minimum.

Total oil will last us another 170-200 years.
Meanwhile, Russia is also one of the leaders in natural gas reserves, as well as in the development of nuclear energy.
TR1

The amount of oil in Russia is enormous. I think reason why they don't provide cheap oil is because they are selling it publicly at market price, and selling it cheap domestically, is not good for "their profits". I don't think it is right, but that is how they are keeping up with massive profits. But it would definitely help average person if gasoline was cheap.
collegeboy16

Yeah, fuel in russia should be cheaper since you have sh!tloads of it. Tho it shouldnt be cheaper than water so you dont get too
dependent on it.
Austin

No it should be charged at International Rates ( though its not and is cheaper ) that way you dont waste a precious commodity and appreciate what you have and make most use of it.

Its fine to give cheaper Gas but not Cheaper Oil or Petrol .....if you have more then export more and make more money.
Sponsored content