Hyundai Glovis with 44.000 tons of oil from Ust-Luga to Gwangyang 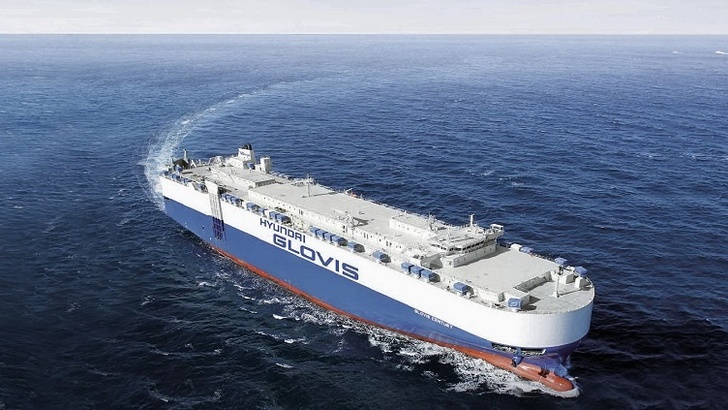 '
Why Russia is sending robotic submarines to the Arctic

PapaDragon wrote:'
Why Russia is sending robotic submarines to the Arctic

BBC anti-Russian drivel makes me cringe.   Poor safety record in nuclear submarines?   F*ck you, lying wankers.
Give real statistics and not just "seven lost submarines".   How many missions and what actual failure rate?
Most of those subs went down because of non-nuclear incidents such as fires from liquid rocket fuel.    The Arctic
submarine in question and the nuclear power plants on the seabed have nothing to do with rockets.    And the British
racists at the BBC ignore the fact that Russia has achieved technological progress in nuclear reactors and submarines
since the 1960s. Reading this hate-filled shit one would think that no such progress has occurred.

The BBC is bitching at some BS potential accidents from Russian subs in the future while not making a single squeak
about the massive amount of radiation that Japan has been dumping into the Pacific since 2011.    If you clowns
pretend to care about nuclear contamination, then don't assign it a nationality.
Cyberspec

Who cares what they write....the dogs bark the caravan moves on
PapaDragon

We all know that those MSM articles contain mandatory amount of horseshit and I expect you all to ignore it as usual and focus on interesting bits.
GarryB

If you ignore it you are accepting it as true.

Call them on it every time they spew their lies, is the only way to deal with those biased arseholes.

Regarding the content it is amusing considering the history of the UK in particular and Europe in general in raping the planet of all useful resources... it seems they are pissed that only now with the potential tools to take advantage of the more inaccessible resources on the bottom of the ocean under the north pole they no longer have any colonies nearby to exploit those resources for themselves.

Those Russian bastards... thinking they can increase their military presence in the arctic... I mean just because they are building bases on Russian territory does not mean they can do what they like...

Imagine the Russians not rolling over to western sanctions and choosing to just give in, but actually taking steps to secure the resources in their economic exclusive zone in the arctic... for themselves... what selfish bastards... I mean the UK would be fine if other countries tried looking for oil or gas resources in the north sea right?

The UK would not use their military power to prevent other countries looking for resources there would they?
PapaDragon 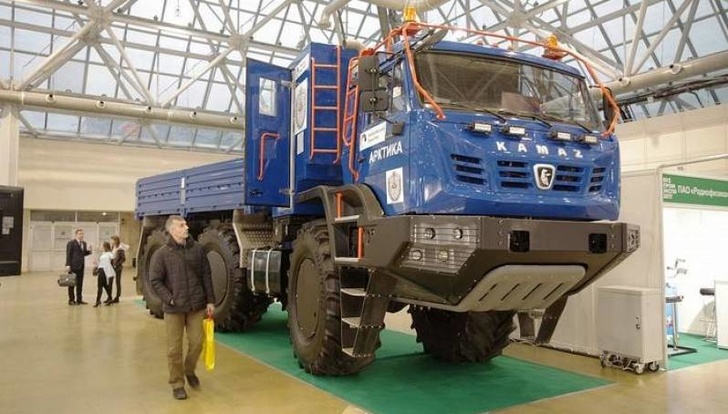 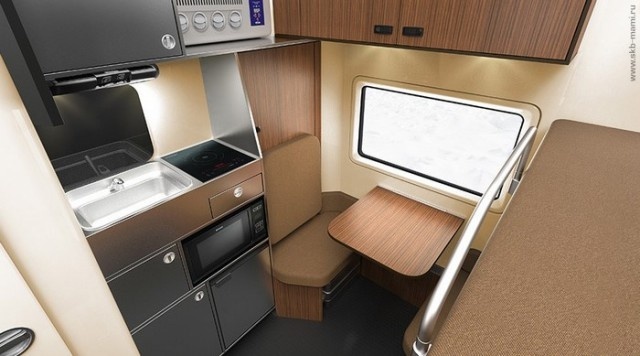 PapaDragon wrote:'
Why Russia is sending robotic submarines to the Arctic

Because this is equivalent of 70s Moon launch rush?

Imagine how many robotic (autonomous vehicles level 4 inclusive), electronics, mechatronics, AI or material science technologies will be developed. Most of which dual use so to speak.  Underwater drilling complexes accidentally can can be sued like Chinese artificial islands as A2/AD NATO sub areas. No wonder that international community is concerned.

NO possibility to steal it form owners! And no Browders? no McCains? no Soros'es or other British/American "philanthropists" included? ouhg this must hurt.
GunshipDemocracy

Love to ride such suv in city traffic

Brilliant little video embedded here. When a little group of intrepid Russians exploring the Arctic in their Toyota 4x4 met the icebreaker Taymyr which powered past pretty close.

JohninMK wrote:Brilliant little video embedded here. When a little group of intrepid Russians exploring the Arctic in their Toyota 4x4 met the icebreaker Taymyr which powered past pretty close.

Arctic version of Mi-171 (A2) has completed tests 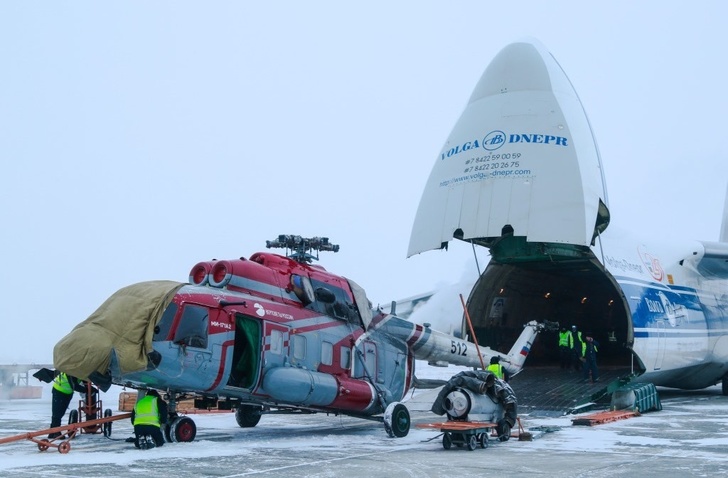 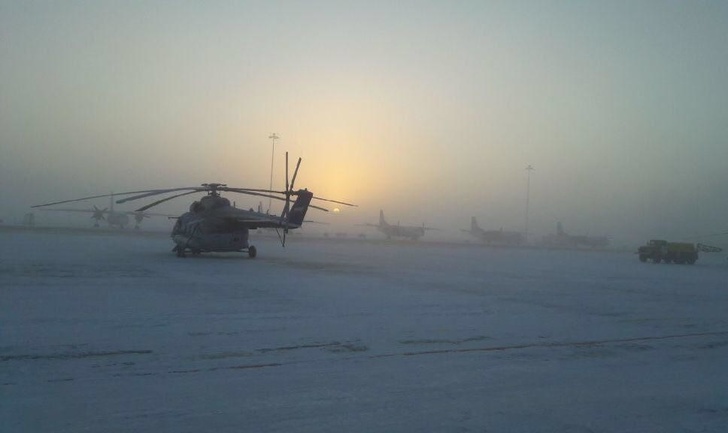 Greeced lightening as our buddy George would say...

Arctic Obsession?
Why do you post this english Propaganda?
AlfaT8

Hole wrote:Arctic Obsession?
Why do you post this english Propaganda?

It was either here or the propaganda thread, since it was on topic, i placed it here.

Hole wrote:Arctic Obsession?
Why do you post this english Propaganda?

Funny how they never call Canada's dementia over its Arctic sovereignty an obsession. Canada has been accusing
the USA, Russia and anyone else of violation of its virginity since some submarines and ships go through the Arctic
Archipelago without kissing Ottawa's anus first. There is a 7 nautical mile territorial limit in confined waters and some
of those channels are much wider than 14 nm.

The route through McClure and Barrow Straits is super wide. Canada must be claiming subsurface rocks as
genuine islands. But such ploys are BS according to international law. Canada has no right to impede navigation
based on underwater obstacles.

For example, Russia must allow Ukraine access through the Kerch Strait even though most of it is too shallow for
shipping and there is only one narrow section (much less than 1 mile in width) that allows ships (this is where they
built the metal bridges).
GarryB

Funny... I wonder if they will do programmes on places in the UK like coal mines and former textile producers.

Interesting fact... if you come to New Zealand and go into a department store the place where they sell bedding and home decoration stuff is often called the Manchester department... because for quite some time the boxes with material for that department had manchester printed on the side... of course that department should now be called China... wonder what has happened to all those textile factories in Britain?

Could we make a documentary about how those towns no longer have people who make clothes and that a lot of young people have left those areas looking for better prospects?

From what I know about global warming is that there are often tipping points... raise the siberian temperatures a few degrees and all those frozen peat bogs stop being frozen peat bogs and start being peat bogs... full of methane... release that into the air and all of a sudden global warming becomes vastly more likely an issue... your fancy western electric cars make little difference when warmth from the sun releases trillions of tons of methane into the atmosphere....


Funny how they never call Canada's dementia over its Arctic sovereignty an obsession.

Or their occupation of islands round the world in locations they deem strategic (ie near potential oil reserves)... cough cough Falklands...
Hole

The textile factories in England were supplied by Indian fabric. With India gone...
GarryB

India is still there... they obviously didn't want to pay a fair price for their fabric... it makes them uncompetitive...

That is what colonies are for... cheap raw product... that is what the west wants for Russia... destabilise it so it can be the cheap raw material source for the western production machine... they keep their high standard of living and they don't care about Russia or Russians... why should they? They lost the cold war... and their punishment is the western use and abuse of their resources.

Problem was Putin seemed to think Russians should benefit from the resources of Russia...
Hole

All this obsession in England with the channel and the northern sea...

Another one for the history books

And some cold hard reality from Moscow Times, posted in full so you don't have to give them clicks:

A new shipping corridor between Asia and Europe promises to strengthen Russia’s control over the Arctic.

While Russia’s economy is increasingly burdened by Western sanctions, Moscow has recently made crucial headway with a new Arctic transport corridor, which could have far-reaching economic and geopolitical consequences.

Last month, Maersk, which is the world’s largest shipping firm, made headlines by sending its first cargo ship through Russia’s Northern Sea Route. The NSR links Asia to Europe, utilizing Russian waters in the Arctic Ocean.

Moscow’s case for promoting the NSR is obvious. The route between Asia and Europe is about two weeks shorter than its Suez Canal competition. Fewer days at sea means faster delivery times and lower fuel and personnel costs. There are also fewer vessels using the NSR and with Russian policing the route, piracy is not a concern, unlike in the Suez Canal or the Malacca Strait.

Even though Russia has long used the route, the NSR is now attracting global attention due to climate change. Although it is only currently accessible for roughly three months of the year, this window — along with its global importance — is only expected to widen over the coming years as temperatures rise.

But this new transport corridor, linking South Korea to St. Petersburg, is already redefining the international flow of goods and services. Capitalizing on increasing Asian demand for Russian natural gas exports, Moscow will increasingly link its Yamal production directly to the growing North East Asian markets of South Korea and Japan. This is dire news for the shipping economies in the region, like Singapore, which rely heavily on the tariffs generated by their role in the global transportation chain.

For much of the past decade, analysts have said the NSR is merely a pipedream. Some critics have argued that the isolated nature and operational environment of the Arctic was a roadblock. Others argued that in order to be competitive, the NSR must be accessible year-round. Experts also have suggested that Russian energy is a thing of the past, citing “game-changing” U.S. LNG.

Frankly, climate change is taking care of the ice and Putin has injected large investments into Arctic infrastructure to make the region more accessible. Basic market forces reject the assumption that Russian LNG is not competitive. U.S. LNG is expensive in comparison to Russian Arctic LNG, especially taking into consideration the fact that Russia’s energy export market is simply closer to the import-hungry Asian market.

What’s more, a burgeoning global population necessarily means increases not only in energy demand, but demand of goods via our transport corridors. Congestion in the existing corridors will only continue to rise and this quite simply threatens supply security for much of the market. Enter the NSR.

Russia will assume the Chair position for the Arctic Council in 2021, an intergovernmental forum which addresses regional issues. In the lead up, Moscow can be expected to tout the corridor as a reliable, commercially sound and secure international transport route. Which it is.

It is likely that Russia, especially in its role of Council chair, will frame the NSR as a hallmark of Russia’s cooperative Arctic agenda. Potentially, further Arctic securitization measures including military installations will be employed by Moscow to safeguard its economic interest in the NSR. Despite the NSR tariff potential and windfalls for the Kremlin, the bigger prize for Russia is that it will facilitate Moscow’s control over a vast amount of global trade.

Dr. Elizabeth Buchanan is the Jean Monnet Research Fellow with the Centre for European Studies at The Australian National University. Her areas of expertise are Russian foreign energy strategy and Arctic geopolitics. The views and opinions expressed in opinion pieces do not necessarily reflect the position of The Moscow Times.

One sentence is wrong. It should read: "russian economy is increasingly supported by western sanctions".
Sponsored content