The training squadron of Borisoglebsk air base located in Voronezh Region will have 25 Yak-130s by the end of the year, RIA Novosti reports with reference to the representative of the Ministry of Defense, Air Forces, Colonel Vladimir Deryabin.

The head of press-service of the Western Command, Colonel Andrey Bobrun, stated earlier that the training base will be outfitted by only 15 such vehicles in 2012.
Follow us on: Follow ruaviation on Twitter

"The training squadron of Borisoglebsk air base will be outfitted with 25 Yak-130 by the end of this year", — Vladimir Deryabin noted.

The Russian aircraft company “Irkut”, which is located in the Siberian city of Irkutsk, is currently perfecting the combat and training plane “Yakovlev-130”. The new, modified model of this plane will most likely be of great demand both in Russia and in several other countries.

“Yakovlev-130” is the first military plane which was created in Russia in after the collapse of the Soviet Union. That time, the 1990s, when many branches of industry in Russia were experiencing a crisis, was not easy for Russian aircraft industry as well.

Most likely, “Yakovlev-130” will be the last plane released under the name “Yakovlev”. This doesn’t mean, however, that the legendary Russian Yakovlev aircraft design bureau is ceasing to exist. The reason is that the bureau has become a part of the “Irkut” company. Now, Yakovlev planes are being built at a plant in Irkutsk which belongs to the “Irkut” company.

Employees of “Yakovlev” say that becoming a part of “Irkut” was a favor for them. This amalgamation allowed them to produce more planes – in 2012, Russia’s air forces received 25 “Yakovlev-130” planes.

However, just a few years ago, it was rather uncertain whether the “Yakovlev-130” plane would be released at all. First, this plane had a serious competitor – the Russian plane “MiG-AT”. Second, the entire situation in the Russian aircraft industry was rather unstable. Besides, for some time, the Yakovlev bureau has cooperated with the Italian “Aermacchi” company, and it is hard to say whether this cooperation was profitable for “Yakovlev” or not. On the one hand, when the Italian company was still in this joint project, it quite legally acquired access to the Russian bureau’s know-how. Now, “Aermacchi” has withdrawn from this project but is releasing a plane called “M-346”, which is similar to “Yakovlev-130” like a twin, and which is now a competitor for the Russian plane. On the other hand, the money, which the Italian company invested in this joint project, allowed “Yakovlev” to survive a period when the state was not financing it at all. Besides, “Yakovlev” started to release its new plane earlier than “Aermacchi” began releasing its analogue, which will most likely allow the Russian company to receive more orders for its plane than its former Italian partners (now competitors) may receive for its analogue. Moreover, engineers from the “Irkut” company are constantly perfecting the construction of “Yakovlev-130”.

The plane’s new model will be able to carry some additional kinds of weapons, like air-surface missiles “X-31” and “X-38”. Besides, the plane can be perfectly used for training young pilots.

Experts say that with the current development of military equipment, pilots should rather be trained on real combat planes than on their training versions. (Russian pilots sometimes dub training planes “flying school-desks”.) True, using real combat planes instead of training planes is more expensive and demand a more developed infrastructure at training centers. But using real combat planes for this purpose present quite a few other merits, and experts say that the final result is worth all the expenditures. Thus, the demand for the new Russian plane in the world is now large and will most likely be large in the foreseeable future.

In Russia, the demand for “Yakovlev-130” is large as well. The short-range plans of the Russian Defense Ministry include acquiring 65 such planes. In total, it is planned that the Russian Air Forces will have more than 200 “Yakovlev-130” planes.

Brazil is apparently interested. Part of the deal might include equipping the YAK-130 with the SCP-01 Scipio radar (Italian-Brazilian radar) which is used by Brazil's AMX fighter-bombers.

Scipio is an airborne, multimode, I-band radar. Brazil is its only known customer, and the AMX attack jet is its only platform. Scipio radar is manufactured by Mectron - Engenharia of Brazil. The main competition for Scipio comes from Israel Aircraft Industries' Elta Systems radars. Elta's EL/M-2032 and EL/M-2001 have been selected over Scipio for Venezuelan and Italian AMX aircraft respectively. An interesting note is that the Scipio (SCP-01) radar is currently featured in the online Galileo Avionica airborne radar brochure. Galileo Avionica is part of Finmeccanica. This advertising may be an attempt to raise interest in this radar and boost sales.

The nice thing about the Yak-130 now is production capacity.
It is well mastered and being procured in numbers for the RuAF, as well as already exported.
Irkut can make 30 Yak-130s per year right now if it wants to, so even accounting for 15 RuAF birds per year, an export customer would get their birds fast.
TR1

First 3 Yak-130s delivered of the year. Another 16 are to be delivered this year.

Now that is a proper pace of delivery.
George1

PARIS — The Russian maker of the Yak-130 trainer/light-attack aircraft hopes to sign a deal with Bangladesh this year, the latest in Irkut’s export push, according to the program’s director.

At the Paris Air Show on Wednesday, Irkut’s Konstantin Bobovich added that Belarus signed a contract in December to import the trainer, which flew at the air show.

He said “many countries have expressed their interest,” including those in Latin America, Southeast Asia and former Soviet republics. Irkut has been “coordinating quite intensive negotiations,” he said through a translator.

Meanwhile, domestic delivery of the aircraft is proceeding. In 2011, the Russian Air Force signed a contract for 55 Yak-130s to be delivered by 2015, with an option for another 10 aircraft. Irkut delivered 15 planes to the Air Force last year and plans to deliver another 18 this year.

In April, Russian flying cadets began making solo flights. “Everyone agrees the aircraft meets the necessary requirements for training,” Bobovich said. “It is good enough for rookie pilots and also good for advanced students about to complete school.”

The Yak-130 has a maximum combat payload of 3,000 kilograms and a maximum range of 1,600 kilometers, and its parameters have been validated by pilots, he said.

As it helps develop pilots and explores more export orders, the company is also turning toward upgrading the aircraft to make it more marketable, Bobovich said. That includes adding an optronic system pod, in-flight refueling system, airborne radar and widening the weapons options of the aircraft.
TR1 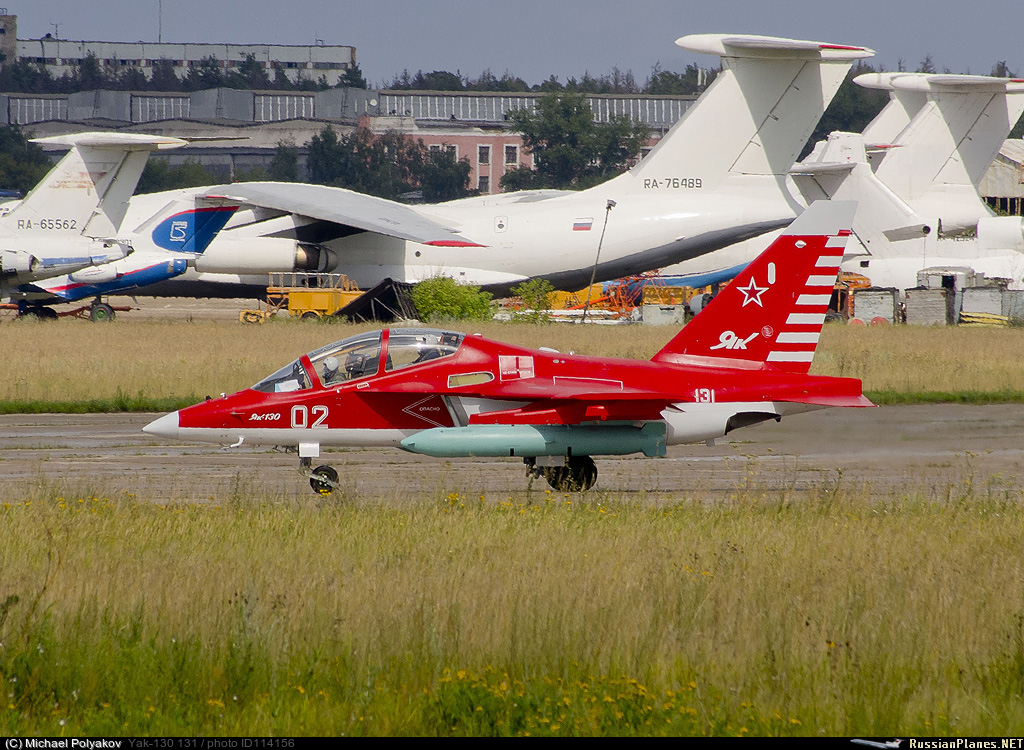 Nice photos guys... interesting that top left of your shot is an amphibious plane... Be-200? in front of an Il-76. 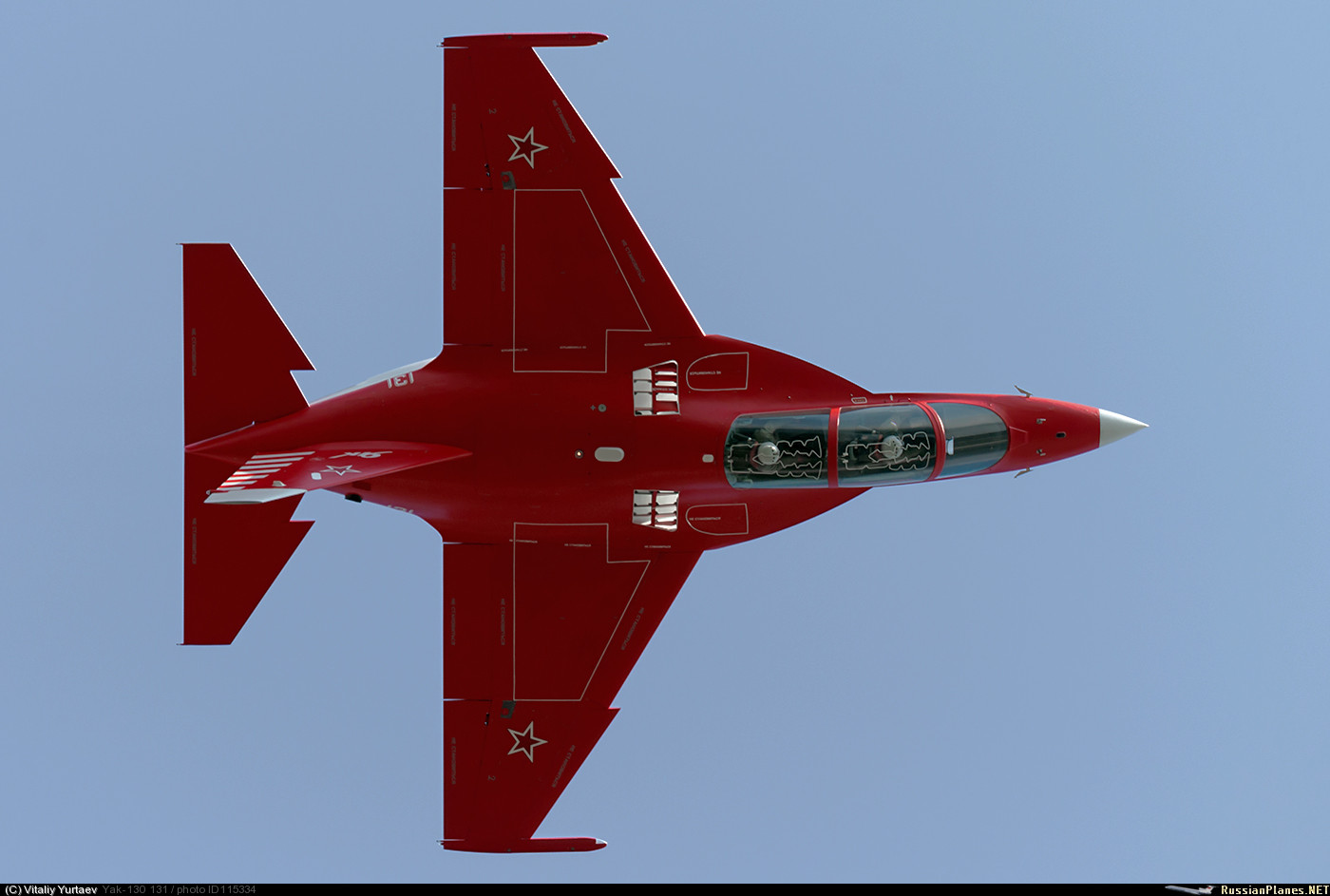 A really nice photoreport of Yak-130s doing their thing.
Viktor

According to Bondarev, after the current contract for 55 birds by 2015, the MOD will order another batch at least as big from Irkut.
TR1

There have been 30 Yak-130s delivered to VVS from Irkut + the pilot batch from Sokol.
40+ cutting edge trainers, that ain't bad by anyone's standard.
d_taddei2

I personally think the YAK 130 would be ideal, for defence forces or poorer countries with a small budget, as its cheap and cheap to maintain, it can be used in all the roles a defence force would need, trainer, light attack, recce, anti air, anti ship/sub, aswell as being able to operate from unpaved and grass strips, ideal for some of the remote islands and small air fields that some small countries have.

Does anyone know if any country has purchased or plans to purchase, or even using the YAK-130 in any of the roles above (other than trainers). I know the Russian air force rejected the YAK-130 for light attack due to protection requirements. But many light attack aircraft have little no protection, other than a few counter measures chaff etc. Also has anyone got any ideas as to what YAK-130 would likely to be armed with for the following roles: light attack, anti air, anti ship/sub????? any info would be great.
TR1

hi sorry i am not familiar with this, could you explain please,