Werewolf wrote:They would need something like VK-1700 series of engines, but way to go to market such product which they have showed little interest to research and produce such product yet. Slim market share for such engines Klimov has that is why they are not gambling on such class of helicopters.

According to the information posted on the state purchases website, on June 5, 2017, the Russian Defense Ministry concluded a contract with PJSC Kazan Helicopter Plant (KVZ, part of the Russian Helicopters JSC) for the supply of ten Ansat-U training helicopters. The cost of the contract is 2.075438 billion rubles. The delivery should be made by December 31, 2017.

Of the delivered Ansat-U helicopters, the first three helicopters (28, 29 and 30 onboard numbers) built in 2009 are located in the training center of the army aviation in Torzhok, and 37 more vehicles have been included in the training aviation group since 2010 At the airfield Sokol (Saratov region) Syzran branch of the military educational and scientific center VKS "Air Force Academy named after professor NE Zhukovsky and YA Gagarin" (onboard numbers from "31.") In 2015, two helicopters Ansat "U" were transferred from Syzran to the 800th Special Purpose Air Base (now the 8th Aviation Ion task division) in the suburban airfield Tchkalovsky, then succeeding board numbers from "59" and "60" for respectively "259" and "260".

Means the "helicopter exchange rate" is 26 rouble for one dollar.


That is full package, it means 16.66 million usd unit price.

GarryB wrote:The engines for Ka-60 were in the 1,300hp power range, so these engines are a little small.

they were talking about developing a whole new family range of engines for helicopters and transport aircraft from very big to small... and they have clearly developed very small engines for various cruise missile designs too.

I suspect they know what they are doing.

Is there any news on this class of engines?

Is it a dead project and it will be instead replaced by something else?

"As a result of the acceptance of the equipment, the helicopters will enter the training aviation base of the Air Force Academy stationed in the Saratov región"

The destination of this 5 helicopters is probably for the 626º UVP (Учебные Вертолеты Полк = Helicopter Teaching/Training Regiment ) located in Pugachev (Sarátov oblast) , part of the Syrizan military aviation Institute
PapaDragon

They don't elaborate but I assume that these two helos are for Coast Guard?

Can anyone clarify?
medo

Most probably they are for Coast Guard 22460 patrol ships.
AMCXXL

They don't elaborate but I assume that these two helos are for Coast Guard?

camouflage of the Border Guard Service (Пограничной службы): https://russianplanes.net/id212424
Guard Coast is a branche of Border Guard , that handle the ships
George1 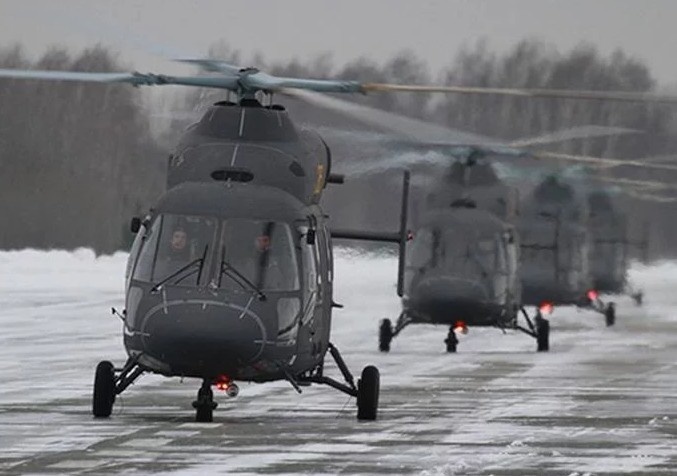 As reported on December 20, 2017 by the Department of Information and Communications of the Ministry of Defense of the Russian Federation, the final batch of new training helicopters Ansat-U entered the training aviation base of the Air Force Academy named after NE Zhukovsky and Yuri Gagarin, in the Saratov region. Crews Syzran branch of the Academy have completed the relocation of five helicopters from the manufacturer to the airport dislocation.

The State Defense Order-2017 for the supply of 10 helicopters of this type is completely completed. In November, five Ansat-U helicopters were also delivered to the Air Force Academy.


On the bmpd side, we recall that on June 5, 2017, the Russian Defense Ministry concluded another contract with PJSC Kazan Helicopter Plant (KHZ, part of the Russian Helicopters JSC) for the supply of ten Ansat-U training helicopters at a total cost of 2,075,438 billion rubles. The delivery was to be made by December 31, 2017, and was implemented on time.

The first five Ansat-U helicopters arrived in the training aviation group at the Sokol aerodrome (Saratov region) of the Syzran branch of the Military Educational and Scientific Center of the Military Space Station "The Air Force Academy named after Professor NE Kuznetsov. Zhukovsky and Yu.A. Gagarin "on November 19, 2017. Now the remaining five helicopters are delivered. The prospective serial numbers of the helicopters delivered in 2017 from 33078 to 33087 are not yet known.

Of the delivered Ansat-U helicopters, the first three helicopters (28, 29 and 30 onboard numbers, coinciding with the latest figures of seriynyh numbers) were built in 2009 in the training center of army aviation in Torzhok, and the remaining 47 vehicles from 2010 the Air Force Academy named after Professor NE Zhukovsky and YA Gagarin (the side numbers of the first 37 helicopters from the " 31 "to" 67. ") In 2015, two Ansat-U helicopters were were transferred from Syzran to the 800th Special Purpose Aviation Base (now the 8th Special Aviation Division) at the Chkalovsky airfield outside Moscow, then changing the airborne numbers from "59" and "60" to "259" and "260" respectively, .

According to the known data, as a result of the implementation of the 2017 contract for the supply of ten Ansat-U helicopters to the Ministry of Defense, and the continuing supply of Ansat helicopters with a hydro-mechanical control system (HMSS) in medical performance for State Transport Leasing Company (GTLK) , the total number of the Ansat helicopters built by the helicopter of all modifications has now reached 80 units - seven prototypes (five with EDSU and two with HMSU), 50 Ansat-U military vehicles with EDSU, 12 civilian with EMF, 11 civilian with HMSU. 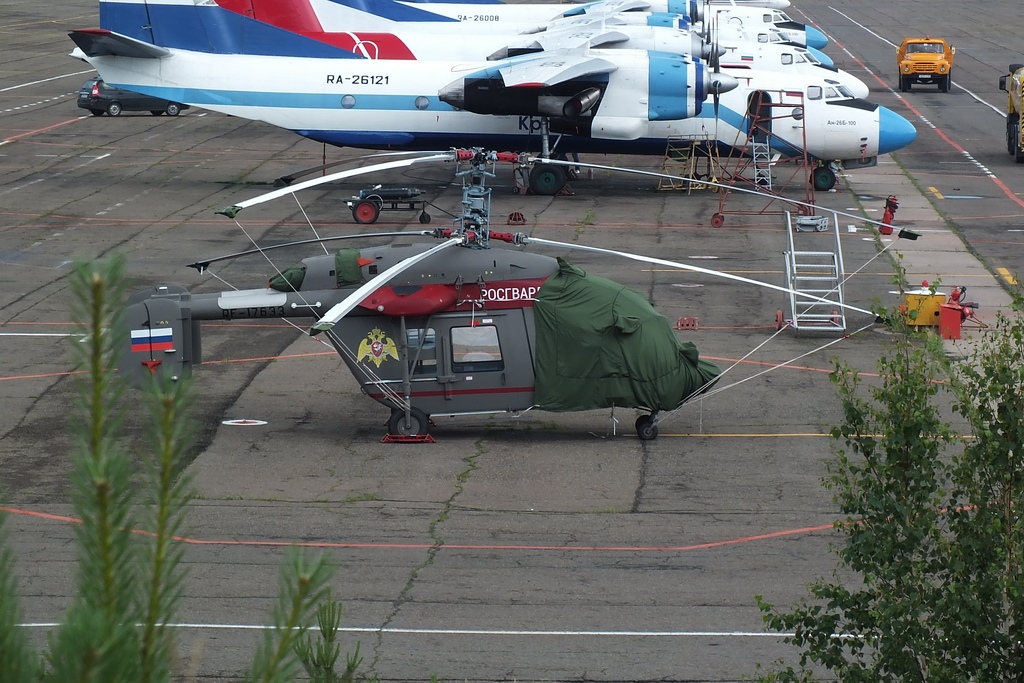 An explanatory note to the accounting statements of Kazan Helicopter Plant PJSC for 2018, published in May 2019, states that the KVZ is carrying out work on the modernization of the Ansat helicopter, "allowing it to be brought to the level of world standards." The works are carried out in two stages: the first stage - with the completion of the first block of modernization in 2018, the second stage of modernization - with the completion of works in 2020. Also in the document it is reported that the enterprise "is preparing the serial production of the Mi-38 helicopter and the modernized Ansat helicopter

by now the Russian Ministry of Defense has received 50 Ansat-U helicopters under three contracts:

On December 30, 2020, the state corporation Rostec reported that a demonstrator of the new domestic VK-650V turboshaft engine, which will replace imported power plants for Ka-226T helicopters, was assembled and installed on a test bench at the UEC-Klimov United Engine Corporation. Its preparation for engineering tests is nearing completion. The first demonstrator of the VK-650V turboshaft engine developed by UEC-Klimov (c) GK Rostec 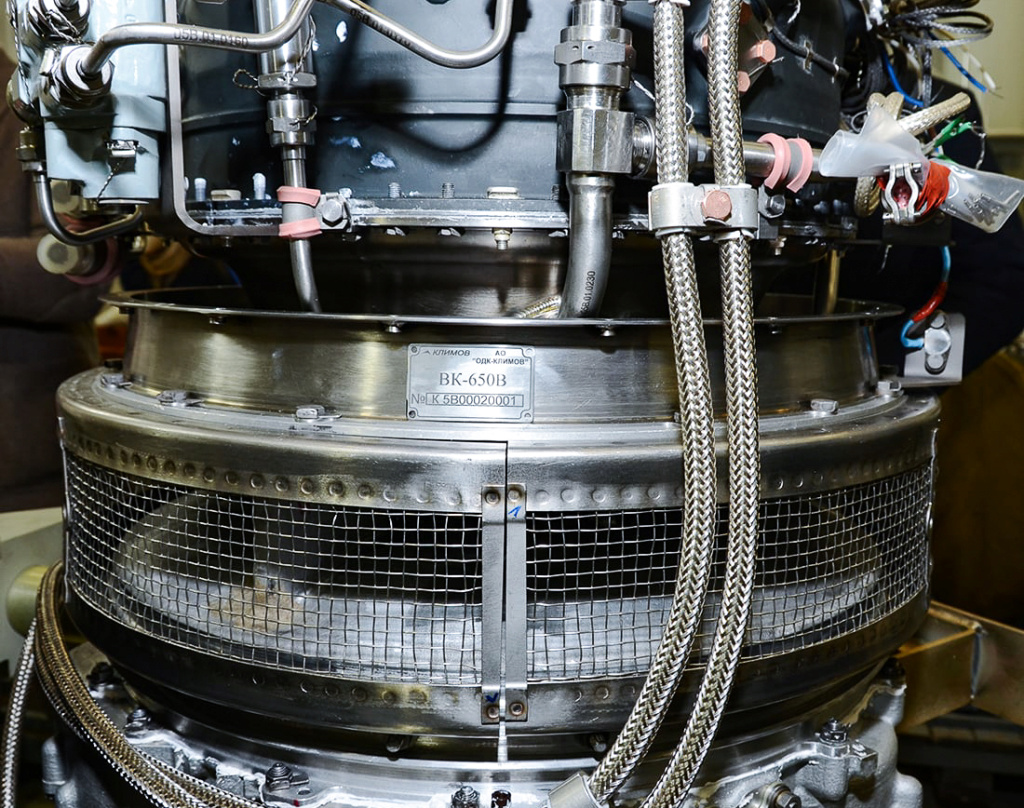 The VK-650V engine has a take-off power of 650 hp and is designed to operate as part of the Russian Ka-226T light class helicopters. It can also be installed on Ansat-U and VRT-500 helicopters and foreign helicopters of the same payload class. In 2023, the unit is planned to be certified, and by 2024 - to begin its serial production.

The test bench includes a new power frame and a hydraulic brake, a fuel-oil system, specially designed for the size of the VK-650V engine, and a modern control room.

“The test bench was created in a very short time, the project involves a large cooperation of the enterprises of UEC and Rostec. The task is to make a simple and reliable unit in operation, having an optimal combination of power characteristics, weight and dimensions, fuel consumption and price. We plan to manufacture prototypes in 2021–2022, and in 2023 to receive a certificate for this engine, and then start mass production, ”said Yury Shmotin, Deputy General Director - General Designer of UEC.

Based on the results of the upcoming tests, the engine design will be fine-tuned. The power plant in its characteristics will not be inferior to foreign counterparts, and in the future will also be adapted for use with drones and light aircraft.

In cooperation on the project for the creation of VK-650V, the enterprises of the MMP them. V.V. Chernysheva, UEC-UMPO and the Salyut production complex, as well as KEMZ, part of the Rostec State Corporation. In particular, the specialists of the MMP named after V.V. Chernyshev provided UEC-Klimov with details of a centrifugal compressor, UEC-UMPO manufactured a free turbine rotor, a combustion chamber and a turbine support assembly, and PC Salyut supplied the first sample of a gearbox.

As reported on November 8, 2021 by JSC Russian Helicopters, the deeply modernized Ka-226T light helicopter, which is being developed by the Russian Helicopters holding of the State Corporation Rostec, began flight tests and made its first flight at the flight test complex of the National Helicopter Engineering Center Mil and Kamov ". This is the first Russian rotorcraft, the design documentation of which was fully digitalized.

On the part of bmpd, we point out that, as you can understand, the modernized Ka-226T "Climber" (Сlimber) in performance 226.54 is actually a modified Ka-226T under the requirements of the Indian side within the framework of the planned agreement on the supply of these helicopters to India and on the organization of joint production in India. The first prototype of the modernized Ka-226T "Alpinist" (Сlimber), performance 226.54 (presumably, the OO1 sample) was first demonstrated in July 2021 atInternational Aviation and Space Salon MAKS-2021, and has now begun flight tests.

Work on the ROC "Modernization of the Ka-226T helicopter" at JSC Kamov (now JSC National Helicopter Engineering Center Mil and Kamov) was started under the contract dated July 2017. In June 2018, Kamov JSC, within the framework of this ROC, signed an agreement on the assembly at UUAZ of three prototypes of the Ka-226T helicopter in performance 226.54 for India (serial numbers OO1, OO2, OO3), with delivery in June-July 2021. Work on the construction of two of these experimental helicopters at UUAZ was reported in 2020, and now, apparently, flight tests of the first of these experimental helicopters (apparently, OO1) have begun.

Recall that in May 2015, the Defense Acquisition Council (DAC) of the Cabinet of Ministers of the Government of India adoptedthe decision to purchase 197 (then the figure 200 appears) Russian light helicopters Ka-226T for the army aviation and the Indian Navy. In October 2016, a Russian-Indian intergovernmental agreement was signed on the acquisition by India of 200 Ka-226T helicopters for the armed forces. According to the Russian-Indian agreement signed in December 2016on cooperation in the field of the helicopter industry, of these 200 helicopters, 60 should be delivered complete from Russia, and 140 should be assembled in India in Bangalore at the joint venture Indian Russian Helicopters Company Limited (IRHL), created by Russian Helicopters JSC and the Indian state aircraft manufacturer Hindustan Aeronautics Limited (HAL). An intergovernmental agreement on the creation of this joint venture was signed in December 2015, and the joint venture itself was formalized in May 2017.

However, until now, mainly due to bureaucratic and political delays on the Indian side, a firm contract for the supply of Ka-226T helicopters to India and the organization of their joint production in India has not been concluded.

To be more precise: the indian side is still waiting for bribes coming from the european or american competitors.

Hole wrote:To be more precise: the indian side is still waiting for bribes coming from the european or american competitors.

Bribes and India go hand in hand. We all said it was the case regarding Rafale deal. Everyone in India and the like denied it. Turns out, they were wrong and we were right.

Hole wrote:To be more precise: the indian side is still waiting for bribes coming from the european or american competitors.

India is literally their own worst enemy when it comes to their defense procurement.

The west loves to look down on that sort of behaviour but take advantage of it every chance they get, and of course in the west the graft is even worse as it is built in to every programme and order.

New test flight of the Ka-226T.
The light helicopter Ka-226T "Alpinist" is undergoing flight tests on the basis of the NTSV "Mil and Kamov".
The helicopter flew in a circle at altitudes up to 300 meters at a speed of about 100 kilometers per hour.
In total, it spent 12 minutes in the sky.
Crew: senior test pilot of the 1st class Alexander Cherednichenko and the test navigator of the 1st class Maxim Bespaly.