btw ... I was expecting little more from aviation part.
GarryB

Have to keep in mind that last year was a bigger event because it was the 65 year anniversary of the Great Patriotic War.

For other years the parade will be more toned down.
Admin

That parade sucked monkey ballz. Not a single fighter?!? We are so cheap we can only fly once every ten years now? Watching the Bastille Day parade is better... never thought I would hear myself say that shit.
GarryB

Fighter planes are expensive... I for one am glad they have reserved the extra stuff for the special years.

Note that 2015 will be the 70th... wonder what new stuff they will reveal for that one.
IronsightSniper

Fighter planes require x money for maintenance and a few money for fuel. If you can't afford daily flights in your fighter jets than chances are you're not prepared for an Invasion!
GarryB

Fighter planes require x money for maintenance and a few money for fuel. If you can't afford daily flights in your fighter jets than chances are you're not prepared for an Invasion!

I agree, but I think money spent for several weeks practising a fly by for a parade is a bit of a waste when they should be training to defend the country.

I could be a really nasty bastard and suggest that the Russian AF really only had a supporting role that was in many ways similar to the role played by the Russian Navy and that the celebrations should be Army based as they did the hard yards.

Obviously the AF and Navy had a role to play, but the AF was seriously outclassed pummelled by the Nazis in the first month of the war and they never really got on top of the Germans till about 43... by which time the result had been decided on the ground.

Not to make light of their sacrifice or their struggle and effort.

It is an economic depression... you can hardly expect dress uniforms and front line units.

I liked the combat uniforms.

The Russian MoD canceled the flypast segment minutes before the parade began on account of the bad weather on that day, which made it difficult for the aircraft to proceed as scheduled from their air bases.
General 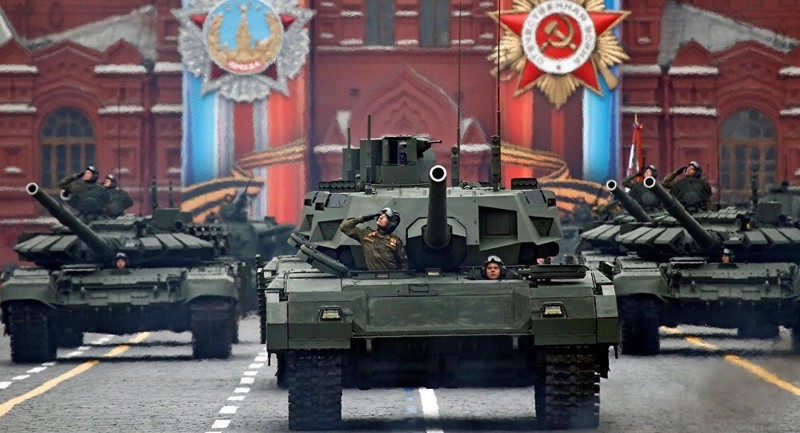 Link to Ministry of Defense website showing:
- cities that parades are taking place plus
- number of people involved
- number of equipment involved
- units or organizations involved

Units in the Moscow parade and their position on the parade grounds.

A more detailed version with equipment and aircraft hi-lighted.

Here is the order of parade, with units and equipment :