I don't see why they wouldn't be using it now.
franco

d_taddei2 wrote:A very unseen/unheard of version of the ka-27,
the Ka-29TB an assault version that can carry 16 troops plus weapons obviously intended for commandos etc. Has any seen or heard much about this version. Does Russia use it. 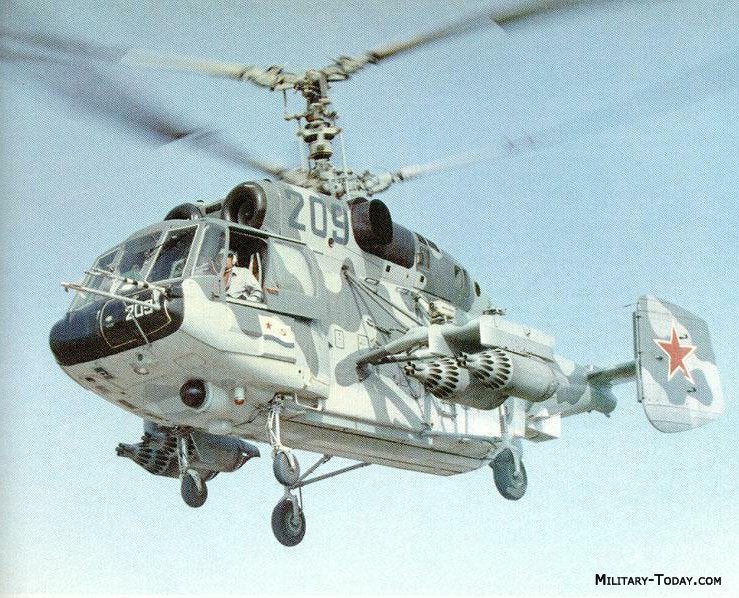 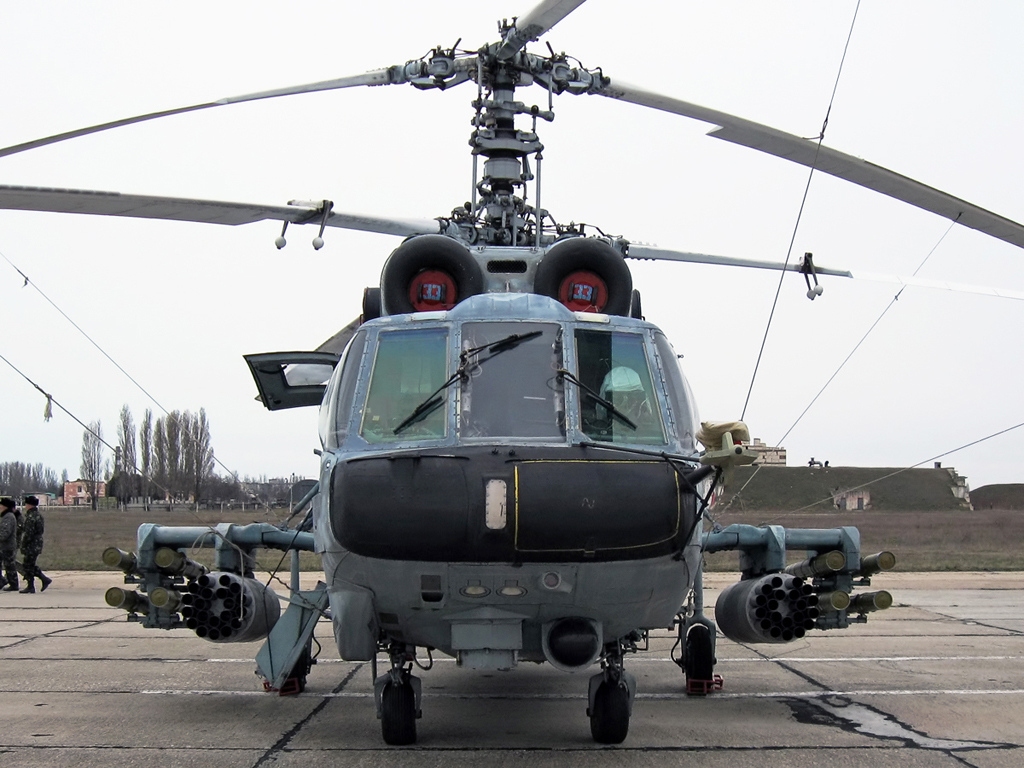 Most were inactive but they have been upgrading and putting back into service a few a year lately.
GarryB

It is basically the Naval Hind... there were two models AFAIK, and they will be the standard troop helicopters for the new helicopter landing ships.

The Mistrals were supposed to carry a mix of these and the Ka-52K attack helos.

One model had a side mounted 30mm cannon next to the weapon pylon, while the other model which is the most common has a four barrel rifle calibre gatling gun behind a panel in the nose.... actually they were probably not different versions but different armament options for the same type.

I seem to recall that the model with the 30mm gun has the ammo inside the main cabin so when using it there is less room for troops inside, so they went for the other model to maximise the number of troops carried.

Would take 16 troop capacity with a grain of salt... with full gear probably less than this would be carried... maybe 8-10? 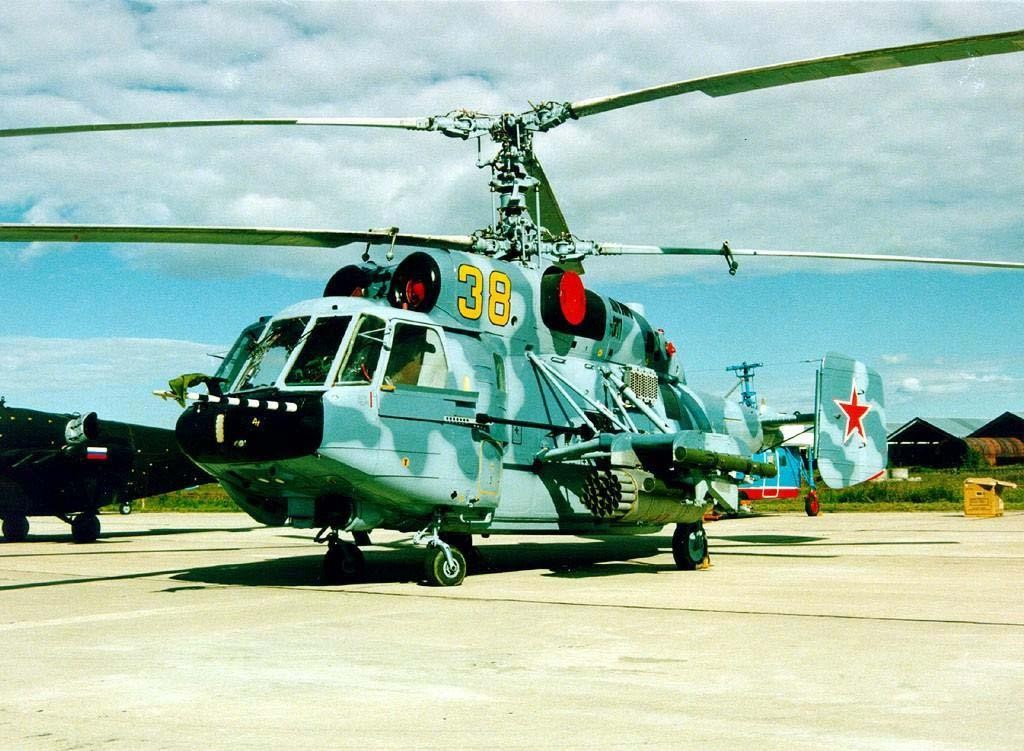 You can see the 2A42 barrel along the side of the aircraft in the above image.

Have no idea how many they have in service, but seem to remember for the anti piracy operations they used them to deliver naval infantry onto enemy ships and that sort of thing...

Will be the troop transport helo for the Ivan Gren vessels and the new helicopter carriers they will be laying down soon and could be carried by the Kuznetsov to deploy naval infantry.
George1

Today, 09: 54
25
The Black Sea Fleet will be the first of all Russian fleets to be re-equipped with modernized Ka-27M helicopters. As stated in the Ministry of Defense, the decision on rearmament has already been made.

According to reports, the first modernized helicopters will receive the 318th separate mixed aviation a regiment based at the Kacha airfield in Sevastopol. Currently, the regiment is armed with the basic Ka-27 configuration. The timing of the arrival of the new helicopters is not named, they will depend on the implementation of the state defense order.

As they say "News", citing sources in the Ministry of Defense, the Black Sea Fleet will be the first to be fully re-equipped with the new Ka-27M, this is primarily due to the return of the Russian fleet to the Mediterranean Sea, where there is a confrontation with NATO countries. In the future, it is planned to supply the Ka-27M to other fleets.

The upgraded version of the Ka-27m helicopter completed state tests in 2015 and in 2016 began to enter the naval aviation, but in limited quantities. In the fall of 2017, the Ministry of Defense announced the modernization of eight Ka-27 helicopters to the Ka-27M level at the Kumertau Aviation Production Association. It was reported about plans to modernize up to ten helicopters a year.

The Ka-27M is a modernization of the Ka-27PL helicopter and is designed for anti-submarine warfare; it can be placed on board surface ships. The helicopter is equipped with a new "radar command-tactical system", which includes new acoustic and magnetometric systems, a radio reconnaissance system, an information-computing system and an on-board radar station "Kopye-A" with an active phased antenna array. 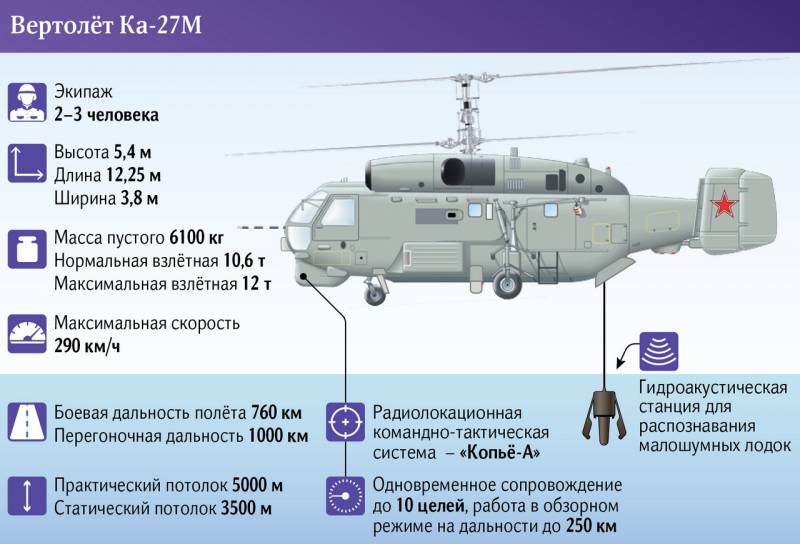