magnumcromagnon wrote:That definitely looks like a TEL, so effectively Iran has the ability to create a mobile ICBM launcher....there's not single air defense system in Saudi Arabia or Israel that could prevent a missile strike from something traveling at Mach 20.

But it probably can't carry a very big conventional warhead so it better be accurate.
magnumcromagnon

magnumcromagnon wrote:That definitely looks like a TEL, so effectively Iran has the ability to create a mobile ICBM launcher....there's not single air defense system in Saudi Arabia or Israel that could prevent a missile strike from something traveling at Mach 20.

But it probably can't carry a very big conventional warhead so it better be accurate.

It's warhead could be something in the ballpark of 120-200kg. Build a few dozen of them (better yet a few hundred), and have them designated to strike critical infrastructure (parliament buildings, military HQs, major radar hubs, etc.), the rest could be done with IRBMs.
GarryB

A reentry proof capsule filled with counterfeit $1,000 US notes... thousands of them... the number of people killed and killing other people to get their hands on the cash would far outweigh any damage HE could do.... especially if with the next five missiles on their way with people mobilising to they can get to the impact point first.... in the last one fill it up with blankets and masks and the underwear of Covid-19 patients who died...

As predicted, next launch to be all solid, three stage, to high orbit.

nomadski wrote:
As predicted, next launch to be all solid, three stage, to high orbit.

Could be dangerous this one. Shows they will be getting proper targets within range.

Might force the US to act. Maybe not before November but after it all bets are off.
JohninMK

A bit more data on the satellite track.

RussSyr
@ynms79797979
·
16h
Iran's Nur-1 military satellite is already sending fierce greetings from orbit to American "friends" and reminding them that everything is perishable in this world, and the second will one day become the first.

RussSyr
@ynms79797979
·
17h
Iranian military satellite Nur 1 crossed over the Zionist entity a little while ago.
Next session, cameras and sensors will be turned on and in duty - Iran 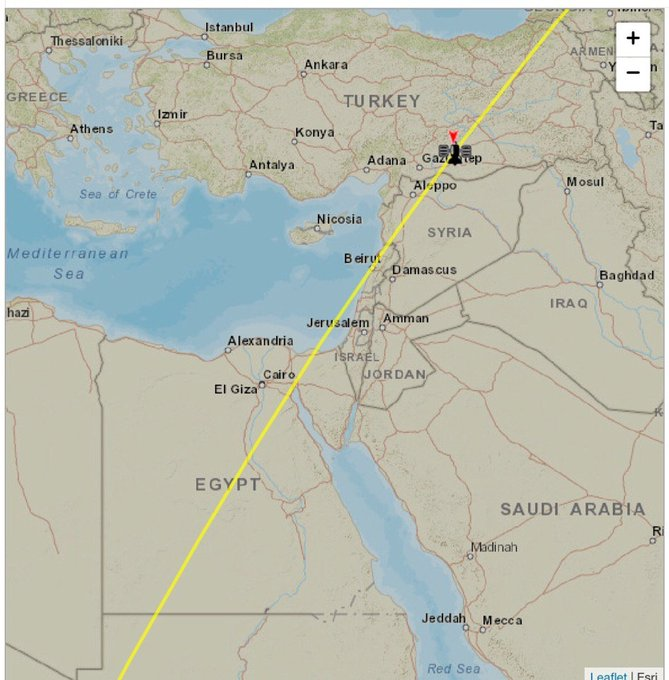 Thanks for your post, with positions of sattelite. You mentioned more risk or danger, for developing more capable  launch or potential warhead. I mentioned less risk. Who is right?  I think that a detterent, has to be credible. A minimum credible detterence. So many warheads, to ensure they get through ABM. So the opponent has real fear of destruction . Working this out can be fun. May involve both sides, at some point.

If it was me, before test launch or new launch, I make sure that I have that minimum number of launch system and warheads ready. Even if they are not tested. And in case of failed design, can be wasted money. In the case the other side, mistakes my system, to be one of only few available. And goes crazy and takes a chance. Attacks. Iran, in this case should have this minimum number to be put on display. For sattelite count. Then I think risk of war to diminish. Already did I think.
George1

Tehran achieved a major breakthrough with its space programme in April, launching the Noor-1 (lit. ‘Light-1’) military satellite into orbit. US Chief of Space Operations Gen. Jay Raymond derided the spacecraft as a mere “tumbling webcam in space". However, in July, Iran released detailed satellite images of the largest US base in the Middle East.

Building on the success of its previous endeavours, Iran needs to move to the development and construction of space-based radars, Deputy Defence Minister Brig. Gen. Qassem Taqizadeh has said.

“Sooner or later, we will need space-based radars. We must pursue this issue in the country’s scientific communities and have the necessary context in this regard to ensure that the country does not suffer from any ‘strategic technological surprises’ in the future,” Taqizadeh said, speaking at a conference on radar and monitoring systems on Saturday, his remarks quoted by Tasnim.

Praising Iranian scientists and industries for their efforts in expanding Iran’s capabilities in radar technologies, including passive and active phased array radars, the deputy defence minister said these efforts were aimed at “thwarting the enemy’s electromagnetic onslaught” and ensuring the operation of sophisticated and effective Iranian air defences.

Advanced radar applications are useful in the civilian sector as well, Taqizadeh said, citing their ability to reduce road accidents and fatalities, help ensure border security, and be used in other areas including meteorology, air traffic control and agriculture.

Citing the regional conflicts on Iran’s borders, as well as Tehran’s mission to assist the Syrian government in its fight against terrorism, Taqizadeh stressed that “these conflicts provide us with lessons and experience, the most important of which is the need for strong defence at various levels. To become stronger, we must focus on industrial research in the fields of radio waves and radars, because radars and surveillance systems ultimately serve the security and development of the country.”

In the past two decades, Iran has become one of the top developers and manufacturers of military radars in the world, creating both vehicle-mountable 3D phased-array systems capable of detecting small aircraft, drones, and micro-air vehicles (MAVs), and larger strategic 3D phased-array systems, which military officials have claimed can effectively ‘see into’ US military bases near Iran’s borders at distances between 400 and 800 km.

Iran established a space programme in the early 2000s and became the first Muslim nation to independently launch a satellite into orbit in February 2009. Since that time, the Iranian Space Agency successfully launched three more research satellites into orbit, and tested two series of space rockets. In 2013, Iran sent a monkey into orbit and retrieved it after a 15-minute flight. In 2016, the Iranian Space Agency announced plans to send astronauts into space by 2025.

In April 2020, the Revolutionary Guard, previously unknown to have had a functioning space programme, successfully launched the Noor-1 surveillance satellite into orbit aboard a Qased (‘Messenger’) rocket, with the spacecraft sending signals back to ground monitoring stations in Tehran Zahedan and Chabahar.

Iranian media touted Noor-1’s launch as a sign that the Revolutionary Guard had “reached such technological maturity that it can now confidently plan and carry out intelligence warfare and military reconnaissance missions from space while gathering data that helps keep the Iranian skies safe.”

Russia is preparing to supply Iran with an advanced satellite system that will boost Tehran’s ability to surveil military targets, officials say

Three payloads ? Anyone detected yet in orbit ? Should be detectable . Each weighting over 100 kg .
George1